Tyler Hamilton has scored by far the greatest win of his career, and cemented his place as one of the sport’s genuine big hitters, with a fabulous victory in Liege- Bastogne-Liege this afternoon. 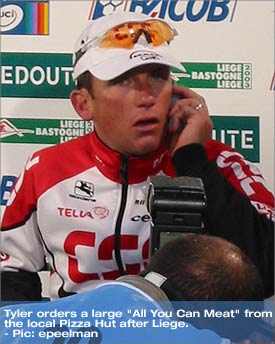 After riding a fine tactical race, and making sure he was in the right position when it counted, Hamilton launched a huge attack with just 3 kms to ride. Giving it everything on the last slope up to the finish in the Ans suburb of Liege, he soloed home in glorious isolation.

Hamilton has come close to a number of major wins in the past, and despite his win at the Dauphine Libere a couple of years back, you’d almost whisper that his talent hadn’t fully flourished in service of Lance Armstrong.

Any doubts or misgivings have now been blown away with this perfectly played, and ‘Monumental’, victory. Hamilton’s name is now written alongside some of Liege’s greatest winners – Kubler, Anquetil and Merckx; Kelly, Argentin and Bartoli. To win the oldest and, arguably, the most open and ‘beautiful’of the Classics is a colossal achievement, which ensures Tyler can turn his attention to the Tour de France with real serenity and confidence. (And as a result, he’s practically rescued CSC’s season, which had been fairly dismal until now.)

Leaden skies, chilly temperatures and showers meant this wasn’t a beautiful procession to round off the Spring Classics. A flurry of attacks made their customary bids for freedom, and at one point Victor Hugo Peсa (USPS) and 3 fellow escapees were 10 minutes in front of the field. But after turning at Bastogne for the trip north, not even a tailwind could postpone their inevitable recapture for long.

Once they’d been caught a dozen riders counter-attacked including Bobby Julich, who’d been active in Fleche-Wallone on Wednesday. They lasted until things started getting busy around the Cфte du Rosier, with 60km to go.

In the frenzy of grouping and regrouping, 6 guys got clear, led by Axel Merckx, who looked back to his old self, seriously hauling up the famous La Redoute climb, placed 35 km from home.

Behind the peloton was starting to shred, but all the big hitters were present – Armstrong, Hamilton, Bartoli, Casagrande, VDB, Mayo, and the under-rated Kazakh Alexander Shefer, looking after Saeco buddies Astarloa and Di Luca.

Up front, Merckx took off with 26kms to go and continued to look good, in an almost time-trial like ride, leaving his companions to be swept up. But he couldn’t hold out alone, and Armstrong flew past with Sanchez, Shefer and Bartoli on the Cфte du Sart-Tillman 16kms from home.

When Bartoli surprisingly cracked, the leading trio found themselves 30” clear approaching the Cфte du Saint Nicolas, but the peloton powered by CSC and some Quicksteps caught up 8km out.

Armstrong gave it the gas, trying to put himself clear, but he was overhauled and Boogerd made an attack 5 kms from the finish. As the rain began to pelt down once more, the Dutchman was pegged by the front group, and as riders looked at each other Hamilton powered away, and into the record books as the first American winner of Liege-Bastogne-Liege.

We saw impressive performances from Jan Ullrich who survived with the leaders until the end; a disappointed Armstrong, who’d made this a key early-season priority; and Axel Merckx who made a real fight of it with his attacking, and solo effort towards the end.

Notably, a 4th place for Michele Scarponi (Domina-Vacanze) – keep an eye on this 23 year old for future years. And who would ever have thought we’d see 3 Spaniards in the top 10 of a Belgian Classic?

Shortly after finishing, a jubilant and almost disbelieving Hamilton told Eurosport: “It’s the most beautiful victory of my career. I didn’t believe (I’d win) until 50 metres to go … I can’t believe it!”

It just goes to show what a feature interview with PezCycling News can do for your career!! You can read Part 1 & Part 2 here.

Throwing all pretensions of journalistic neutrality out of the window … Tyler, that was awesome!! You’ve earned it the hard way – enjoy the glory!

Inside Georgia: The Mountains