The Classics – what makes them so special? For one thing – they’re like fine wine – never fully appreciated unti they reach a certain age. The Spring is full of races with the richest history our sport has to offer, and this weekend runs Round 5 of the World Cup – the storied Liege-Bastogne-Liege. PCN resident historian Jan Didier submits this account of 3 of the most gruelling LBL’s ever…

Liиge-Bastogne-Liиge is called “La Doyenne” in French, which means “the oldest one”. Indeed, the race first appeared in 1892 on the calendar, but it took more than 25 years before it got recognised as an international race of any value. It was only in 1948 that the race was integrated in the Desgrange-Colombo Challenge, the World Cup of that era. And it was after the double victory of the great Ferdi Kьbler in 1951 and 1952, that it was regarded as a major classic.

1919: The first real L-B-L
Only 32 starters for what would be a terrible race. The cold is unbearable and very soon more than 20 riders abandon. In Bastogne, the officials decide to stop the race for 2 hours, so that the remaining 9 riders could heat themselves up. Off again for a terrifying second half towards Liиge, 6 riders will resist to the awful weather conditions and reach the finish, where only a few scarce spectators had enough courage to stay.
At an average speed of about 10 miles an hour and frozen to the bone, Leon Devos finally won, beating his Belgian compatriots Hanlet and Claerhout. 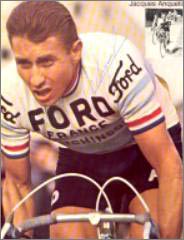 1966: JACQUES ANQUETIL Teaches A Lesson
When you are 32 and your name is Anquetil, you do not give a damn about the 1966 classics. “Maоtre Jacques” has won 5 times the Tour de France and has beaten the World Hour Record. So why bother about Liиge-Bastogne ? Jacques has never been a “classic” racer, and has never won one. But Raymond Louviot, the manager of the Ford-team, puts him on the starting list, and Anquetil – once again – takes off with the lot for another classic he wouldn’t win. That 2nd of May it is incredibly hot, and the first race hours bring the first casualties: abandon of favourites like Rik Van Looy and Jan Janssen. But Anquetil is feeling better minute by minute … and attacks. He joins and passes the escaped trio (Spruyt, Genet, Schleck) at Mont Theux, 40 kilometres from the finish. The last 30 miles “Master Jacques” gives one of his last lessons in how to ride the bicycle, finishing 5 minutes ahead of Van Schil and Godefroot. A first classic win, a great day for Jacques ! He enjoys it … until the Belgian authorities announce that he will have to be controlled for doping. Rage … that has been the standard reaction of Anquetil when any form of control is imposed. He refuses, stating that he can do with his body whatever he likes. The officials menace to disqualify him, and Jacques says – as usual – “Go to Hell !”. Finally they compromise, Jacqus Anquetil winning his first classic race, but not without paying an important fine. 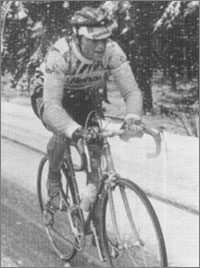 1980: Winter Olympics With BERNARD HINAULT
Terrible weather conditions at the start of the 1980 L-B-L, cold and snow making some riders decide to stay at the hotel. While Knetemann is taking his breakfast and preparing to return back home, Bernard Hinault takes off for a long day of hard work, together with 173 companions. After only one hour of racing, rider after rider abandon: Saronni, Baronchelli, Zoetemelk, Thurau, … In Bastogne, Bernard Hinault feels like doing the same, but a scarce sunray gives him enough motivation to continue. Feeling better all the time he catches up with the leading Rudy Pevenage, passes him and is heading alone towards Liиge … 95 kilometres to go in polar conditions. Behind him, most of the competitors have chosen to have hot coffee with cognac, rather than continue to suffer. But Bernard, this huge champion … he goes on and on. At the finish, all remaining 21 “survivors” have been annihilated. Second, Hennie Kuiper, will finish 9.24 minutes after Hinault, who realises one of the greatest classic performances of all time.