If knowledge comes with experience, and experience brings wisdom, then Andy Schleck is destined to become a wise old man. Starting in only his third Liиge-Bastogne-Liиge, the 23 year-old is clearly ready to carry the future of the sport on his broad shoulders. Velo Classic Tours’ Peter Easton takes us inside race day at La Doyenne.

Schleck certainly paid his respects to La Doyenne, emulating inaugural race winner Leon Houa in 1892 and Eddy Merckx in 1969 by joining the elite “23” club as one of the trio of youngest winners of the oldest classic, and doing it in old-school fashion- solo, and with authority. And while it is clearly an event of the 21st century, the organizer-like Schleck – honors its prestigious status as the oldest bike race by paying homage to the past. 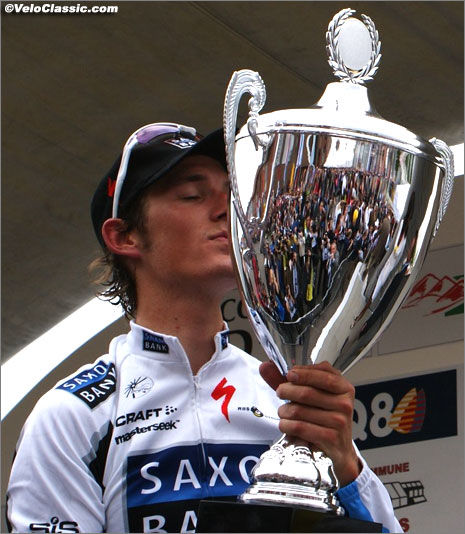 Andy Schleck reflects on the biggest victory in his career.

Aging Gracefully
The Place St. Lambert hosts the start of Liиge-Bastogne-Liиge each year. Until 1796, the Cathйdrale Saint-Lambert, the largest in the Netherlands at that time, stood where the riders and the team buses assemble for the morning ritual of pre-race preparation. 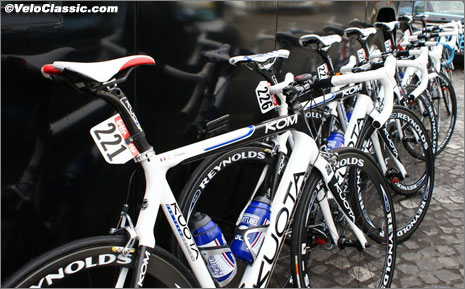 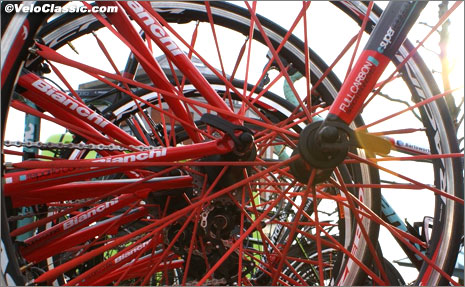 Below are ancient ruins from a Roman villa, neatly preserved and accessed from the terraced square. The south faзade of the Palais des Prince-Eveques-currently the Justice Hall-is an imposing presence for the riders to assemble in front of, and was rebuilt in 1734. 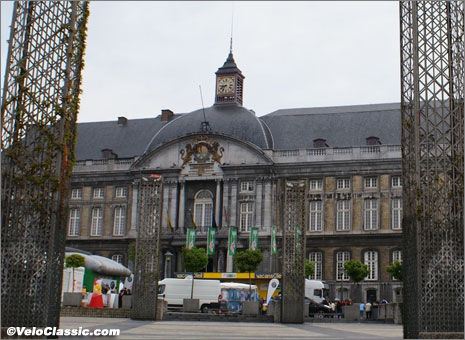 The prestige associated with Liиge-Bastogne-Liиge – and any race organized by the mighty ASO – can typically guarantee a reunion of former professionals, representative of a distinct place in cycling history, and presenting themselves as a liaison to the future of the sport. The start line also includes a number of the longest running teams in the sport, including the Silence-Lotto squad of local hero Philippe Gilbert and his former team, La Francaise des Jeux. Speaking with FdJ manager Marc Madiot is typically brief and to the point, his relaxed demeanor belies the tenacity he displayed in winning Paris-Roubaix in 1985 and 1991. 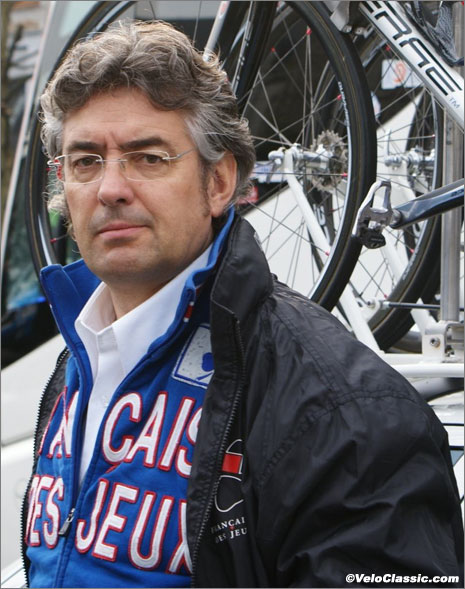 Amidst the swelling crowd of riders, press and VIP’s, there are moments when history is suddenly standing right in front of you. This was highlighted perfectly when I met Gilbert Duclos-Lassalle. After finishing second in 1980 and 1983 at Paris-Roubaix, Duclos-Lassalle captured the Hell of the North in 1992 at the age of 37, and again in 1993 at 38. 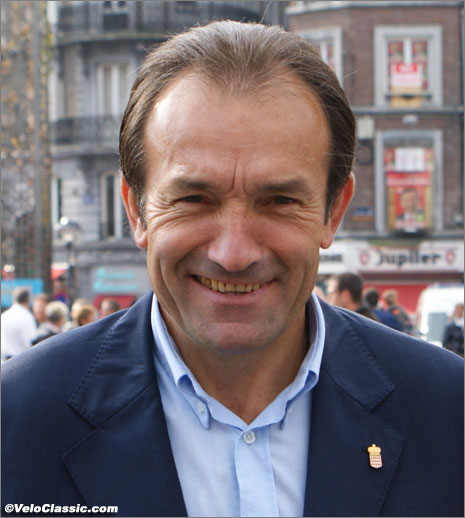 Gilbert Duclos-Lassalle is all smiles. You must be a legend if you have a sector of Roubaix pavй named after you.

In Living Color
Fast forwarding to present day and the colorful crop of younger riders were preparing for another opportunity to write their own script in the spring’s final Classic. French National Champion Nicolas Vogondy of the Agritubel team lined up for his seventh Liиge-Bastogne-Liиge, and still looked happy to be doing so. 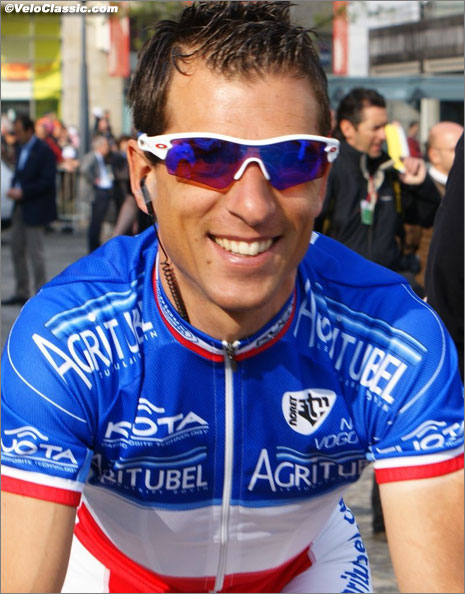 The easy going and always approachable Swede Gustav Erik Larsson was ready for his third Liиge-Bastogne-Liиge, and offered some prophetic commentary. “Today all of our efforts are for Frank and Andy (Schleck). The new climb added last year, the Roche aux Faucons, is very difficult. You think it’s over, but it keeps on going.” Much like the race itself? “Yeah, this is going to be one hellish race”. 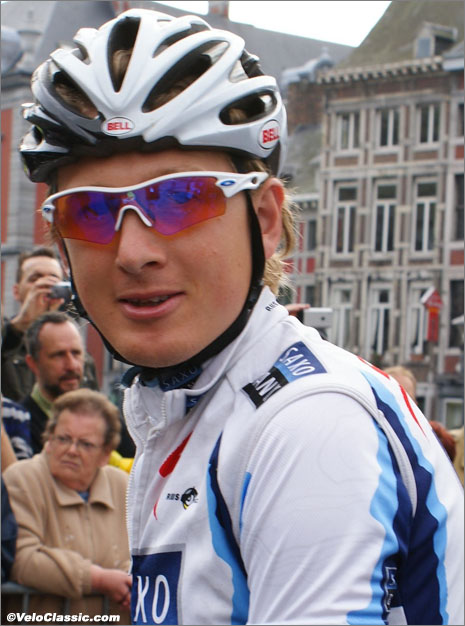 2006 Amstel Gold Race winner and current Luxembourg National Champ Frank Schleck was far removed from the man I saw writhing in agony on the Guelhemmerweg last week during the Amstel Gold Race. I was grateful to see the panic in his eyes and the contortions of his body as the medics attended to him has been replaced with the confident demeanor that carried him to a third place finish here last year. 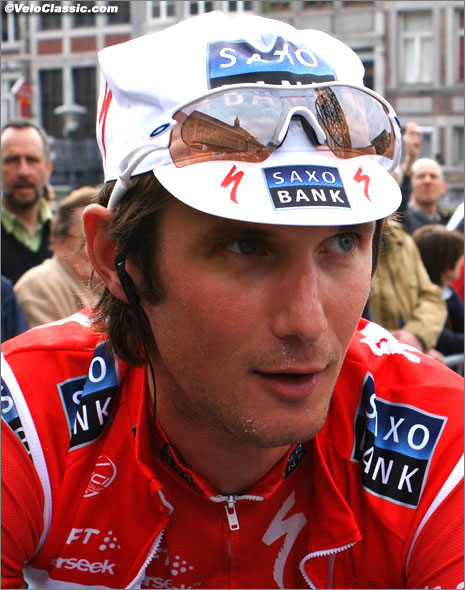 With seemingly half the population of Luxembourg on the course, he was obviously ready to do his part for his team, his countrymen, and most importantly, the raucous Schleck brother’s fan club that usually appears a multitude of times on the course. 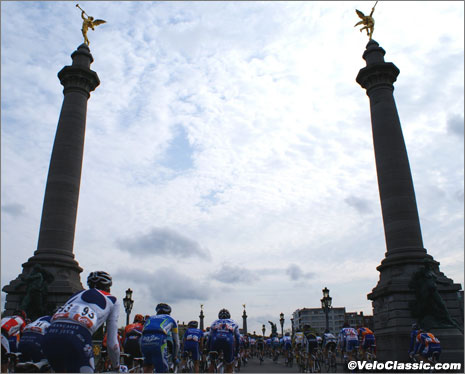 The peloton rolls across the Meuse.

History in the Making
One of the most beautiful aspects of the Spring Classics is how each race embraces its history, respectfully memorializing the past that comes to life for one day each year.

Stan Ockers was a Belgian professional who died after a track cycling accident in Antwerp at the age of 36. 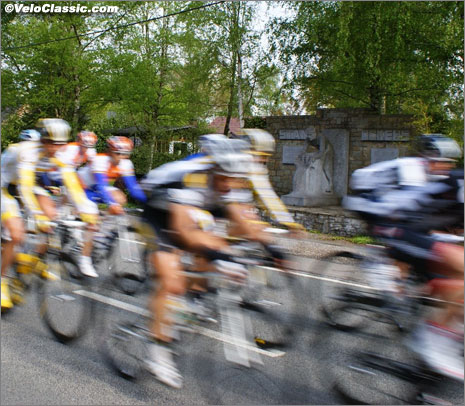 Stan Ockers watches over the peloton.

In addition to winning Flиche and Liиge in 1955, he also was crowned World Champion. A memorial honoring the second man to win Le Weekend Ardennais was built a year later in Les Forges, and the peloton annually pays homage to Mr. Ockers at kilometer 10. 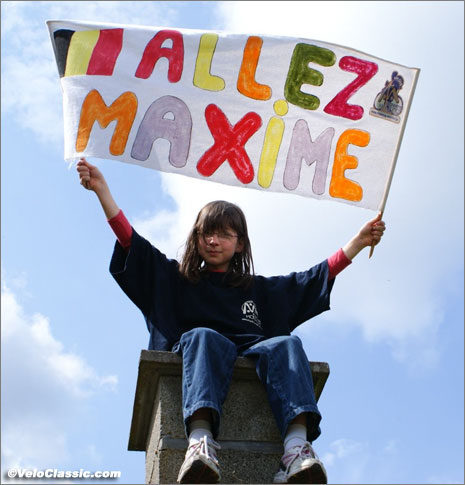 Who will be the champion of the future?

The history of Bastogne still resonates loudly, as the 1:00 pm church bells sounded the arrival of the riders at the newly dedicated Rond-Point de la Doyenne, the symbolic turning point of the race. 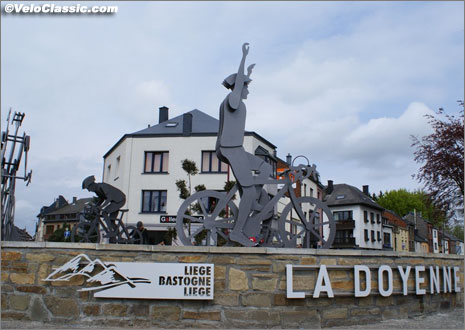 A different type of monument in Bastogne, and well received by its citizens. 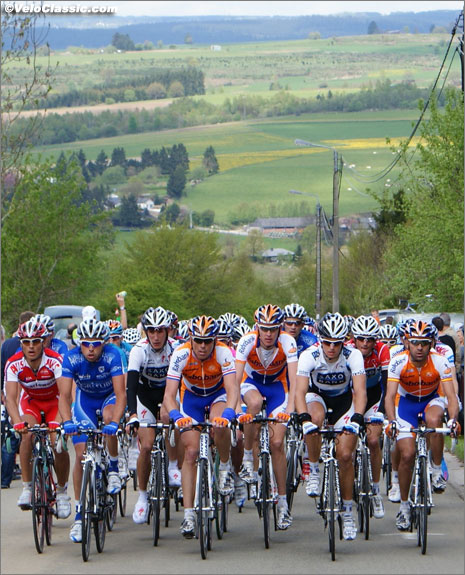 Schleck Bros. and company looking comfortable on the Cote-St Roch.

The villages of Houffalize, Wanne, Stavelot, La Gleize and Stoumont each have their climb that fits into the Liиge parcours, and each has its monument to the soldiers and the battles of World War II that fit into the archives of modern history. One event is embraced once a year, the other a chilling reminder on a daily basis of sacrifice and human suffering. 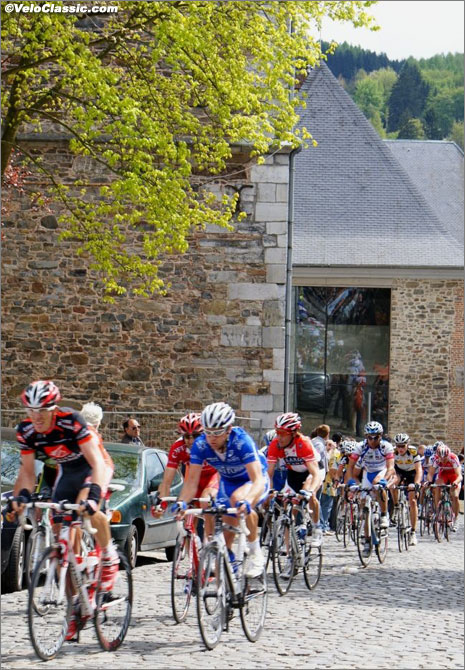 Across the cobbles in Stavelot. 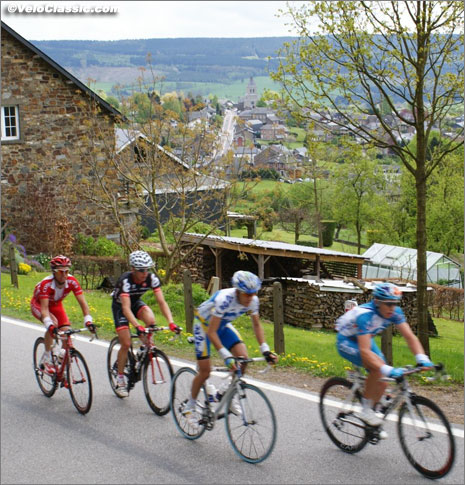 The break on climb number eight. 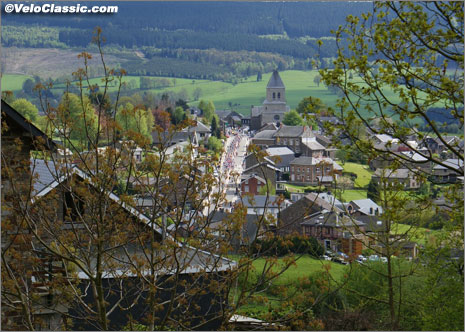 The peloton is not far behind. 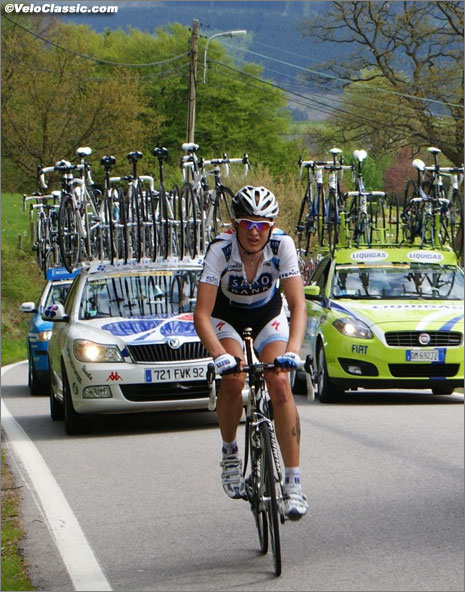 As I drove threw the swell of fans on La Redoute, I was strangled by the passion and intensity that is this race. I imagined all of the riders that have ridden this gauntlet and have suffered for success, and more often than not, have failed. I thought of my own silent inspiration 48 hours earlier, and how the roads of this course, a part of modern life, are animated once a year for a bike race that is now 117 years old. In the end, the pain is the same, the hills are just as hard now as they were years ago, and young or old, the winner will have earned his spot on the top step of the podium, and the rest will have learned a history lesson, and with it the knowledge that comes with the experience of competing in this event, in an effort to return for victory in 2010. 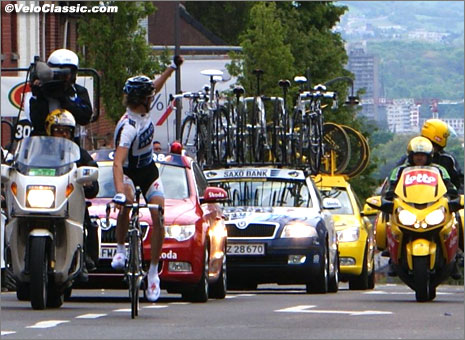 With time for thanks, Andy Schleck won with authority. 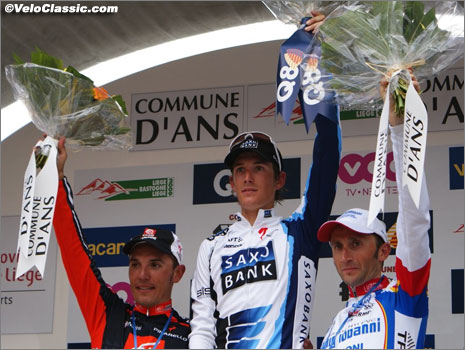 Who will it be next year? 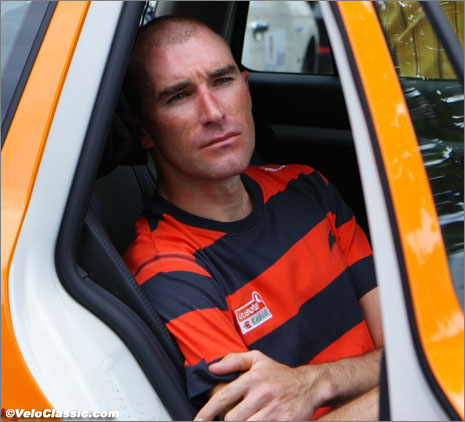 A reminder of the human side of the sport. Inaki Isasi finished 61st.

I met up with my friend Preben van Hecke at the finish, who races for the Topsport Vlaanderen-Mercator team. He made it across 220 kilometers, ending his day just before La Redoute. His Spring Classics campaign was over. He raced the Tour of Flanders, Gent-Wevelgem, Amstel Gold Race, Flиche-Wallonne and Liиge-Bastogne-Liиge. Now that’s what I call old school. 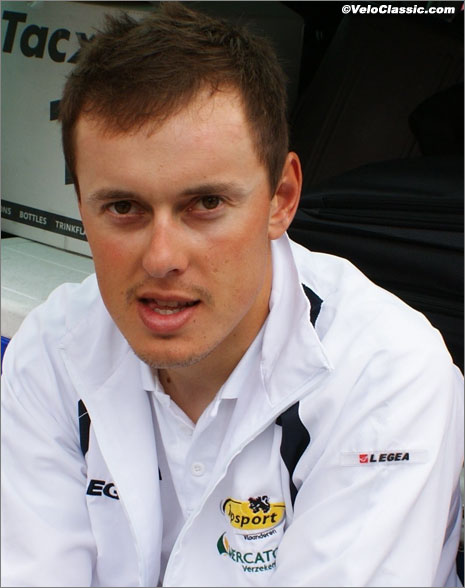 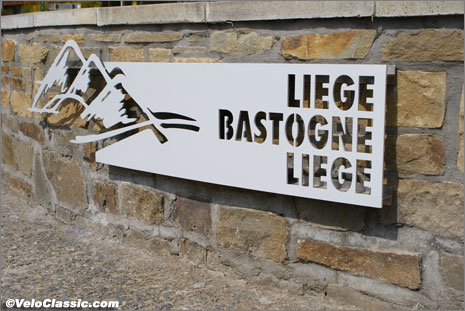 Peter Easton is an expert on the Spring Classics. You can catch up with him and all the Classics on the roads of Belgium and Holland with Velo Classic Tours. www.veloclassic.com.