Today we welcome the newest addition to our team of cycling journalists!. Rusty Beall is a 3rd year pro riding with the brand new Health Net cycling team. I knew Rusty was the right stuff for the PCN team when I saw a photo of himself and two beautiful podium girls at last year’s Vuelta. I also knew that with the right guidance, nurturing, and some basic Spanish – we could provide a solid base from which Rusty could hone his social skills with the fairer sex – so that on his next trip to the podium he won’t look quite so dumbfounded when sandwiched between two lovely ladies. Of even more interest to our loyal readers will be Rusty’s perspective on life as a pro with a brand new team. He’ll be racing the big events across the USA and the making the odd foray across the pond to battle it out in the gutters with guys who may not speak the same language – but know that suffering speaks it’s own universal tongue. So without further ado – we present installment #1 of a series we call… “Life In The Gutter”. 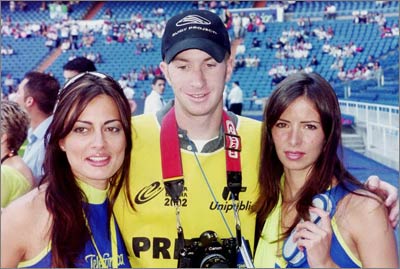 Life In The Gutter – Episode 1
Cyclists are masochistic. We drive hours upon hours to get to races, spend our hard earned money paying entry fees to enter those races, and surrender our free time to training just so we can get our heart rates up to 206… instead of the 202 that got us dropped the week before on the climb.

Hell, I’m the first to admit that I’m the same way. Looking down at the scar on my hip makes my mind wander back to the day at the Tour of Willamette when I thought I could descend with crazy Bob Roll down a moss-covered, 12%, BLM road, sprinkled with gravel … by the way, I couldn’t. Descend with Bob, that is.

Traveling up my body, we arrive at my shoulder, tattooed by the roads of the 1997 Boise Twilight Criterium. There, with three laps to go, I found myself hurling ass-over-teakettle at 36 MPH onto the pavement, after the wheel of the guy in front of me exploded. Regaining consciousness, I found myself sitting on the podium, trying to remember the name of the EMT who had told it to me at least five times. They did give me the prime for being the first guy across the finish line on that lap, though; I’m probably the only guy to ever win a prime in a bicycle race without the bicycle. 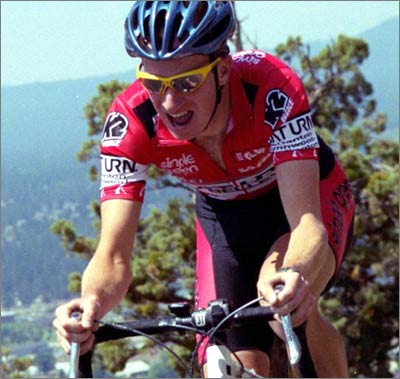 Hammering away in the Cascade TT earned Rusty 24th place.

The scars on my legs remind me of the day in Philadelphia, when, racing for Prime Alliance, I hit a pothole and broke a wheel, helped get one of my teammates back on after he crashed, and helped get another one of my teammates back on after a flat, only to have my cable break on Lemon Hill. I got a bike change, caught on one block before the Manayunk Wall, and crashed when I hit some spilled beer on a brick corner, all in the first two and a half laps of the race.

All of this stuff sounds horrible, and to be honest with you, those were not some of my better days on the bike. This last year, I finished up my degree in economics at the University of Idaho. Now I could just as easily head into the corporate world, make a good living, and spend my money on trips to Hawaii, Tahiti, or Greece never having to worry about getting my heart rate up to 206, flatting, crashing, or racing in the rain. But, what fun would that be for a masochist?

That is why, this season, I will be moving to Nevada City, California to race with the new Health Net Professional Cycling Team, to push myself up those hills, get my team to win, and to make new memories, hopefully without hitting the pavement. It is easy, and nice, to sit on a beach somewhere, but goddamn is it fulfilling to know that you pushed yourself to the limits of what you are capable of doing.

This next season I look forward to giving you all an inside look at the life of a professional cyclist on a first year team, sharing in the good, the bad, and the unexpected.

——————
ABOUT RUSTY
I began racing BMX when I was around six years old, in Wyoming, of all places. It wasn’t until 1989, when I moved to Lewiston, Idaho that I did my first road race and haven’t stopped yet. I did the race with a girl, who was a friend of mine, and two years older. When she finished and I didn’t, I was pissed and it was on. I got onto a local team in Lewiston around 1990, called “Team Buckaroo,” and raced with them until 1995. Then, Kirk Willett, my friend and coach, got me onto Ray’s Boathouse out of Seattle, which at the time was the best NW team going, with Ron Schmeer, Paul Dahlke, Greg Randolph, and Kirk all as alumni of the program. I stayed with this same program (although sponsorship changed to Wizards of the Coast later) until 2001.

In the fall of 2000, I was in college at the University of Idaho, hoping for a chance to ride as a professional (hence my email [email protected]), but had registered for all of my classes and fully expected to return in January. Not much later, I got an offer from Kirk Willett to ride on Prime Alliance, a new team based out of Colorado. Things worked out. It was a great season, but ended up being one of my worst seasons as far as bad luck. I crashed a lot, had a lot of flats, and had numerous, weird equipment failures (like my seat collar).

At the Cascade Classic, I ended up having one of my bad luck days and crashed onto my wrist and broke it. I knew that it hurt, but still finished the race and didn’t end up in a cast until about two weeks later, when it really started to hurt after water skiing. Anyhow, that ended that season and I headed back to school with the goal of finishing up. This last season I finished up school and raced for Saturn of Bellevue, a regional team out of Seattle that was really good to me.

Then, at the end of last season I decided to head to Europe with Daimeon Shanks (PCN Italian correspondent) and had no expectations on cycling, or work otherwise, when I returned, except that I wanted to race. When I got back, Chris McGovern notified me that Health Net was in the works and that they were looking for a young, motivated guy. I called, and now here we are at 2003, ready to race. I also have a sister who races; she is 22 and won the Espoire National TT in 2002.