PEZ Bookshelf: Life’s Too Short To Go So F*cking Slow

There are athlete celebrities who get ghost-written about them. Then there are people who never appear in the newspaper sports pages, people whose performances are never debated online. But sometimes those people have a direct and unforgettable effect on others. Inspiration and motivation: they are in pretty short supply and VeloPress has recently published an entertaining book about people you have probably never heard of but should. 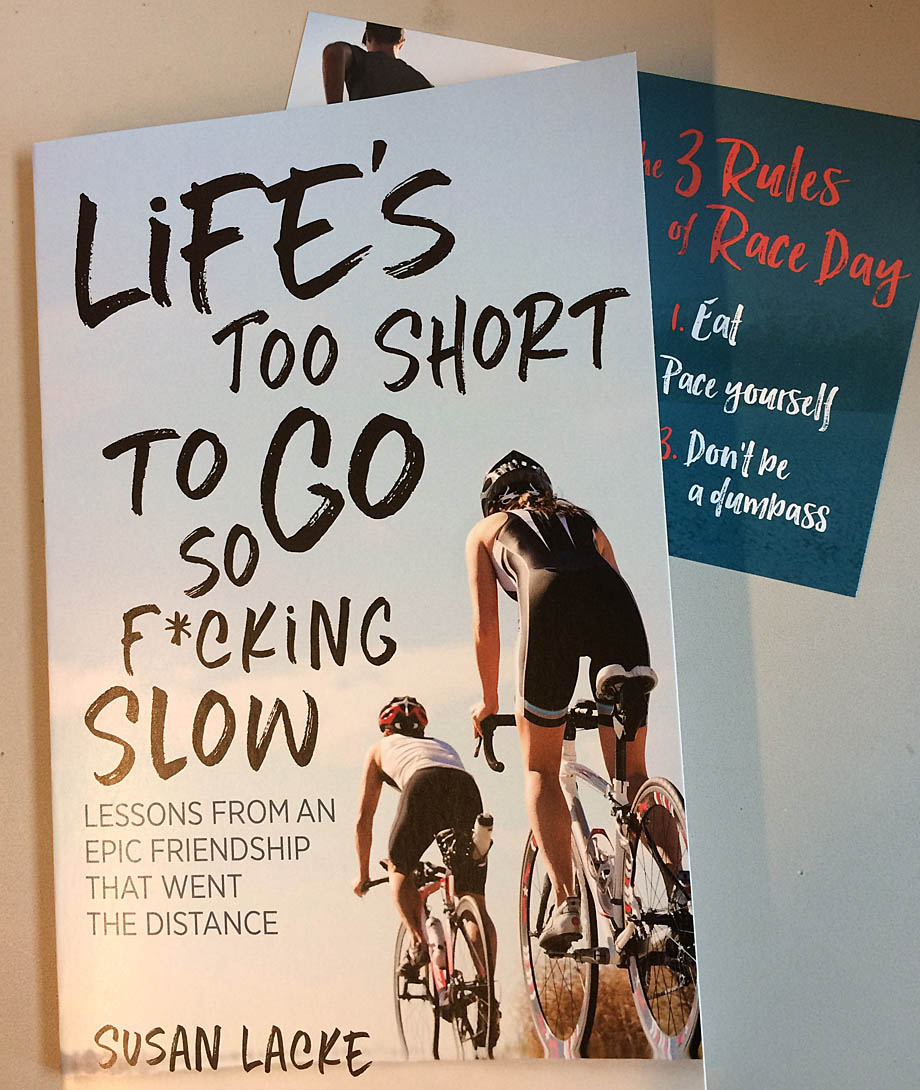 Susan Lacke came to Arizona and a university teaching job as a recently-married 23 year old who, in her brutally honest new book, made some really stupid life choices. Overweight, chain-smoking and a heavy drinker, she was overwhelmed by her new employment and her unhappy marriage. Into this mix appeared her boss, Carlos, an intimidating presence she avoided. He was everything she was not: an engineer who laughed at social scientists; a middle-aged Mexican immigrant and not a young woman from Wisconsin; self-confident (perhaps to the point of arrogance) and in control of things rather than unable to cope. His first informal chat with Susan Lacke was to bum a drag on her cigarette, to her surprise. Further to her surprise he immediately stubbed it out and said: “You don’t need this.” And so a beautiful friendship was born.

Carlos Sanchez was an Ironman enthusiast and he began to mentor the author by force of his dominant personality. He must have recognized that she was at a crossroads and things began simply with swimming at the university at lunchtime. She clearly lacked the gumption to resist but soon found she was enjoying things.

But first another crisis unfolded as she and her husband returned to Wisconsin in an effort to resuscitate their marriage, a desperate move that resulted in divorce. She came back to Arizona and began to pick up the pieces of her life, rather unsuccessfully. Working too hard and desperate to lose weight, she was persuaded by Carlos to begin running and, as an person prone to overcompensation, entered a 5 km race. Bursting with pride at completing it, she texted Carlos at the finish. His ridiculing of her 45 minute time (“Did you skip?”) provoked her to do better and in four years she lost 70 pounds through running.

Running was not the end. After spectating at an Ironman race and being told by Carlos that anyone can do one, she signed up for Ironman Wisconsin. Again overcompensating, she had to get down to work. With a year to the event, she had never run a half-marathon, or spent any serious time on a bike. She didn’t even have a suitable two-wheeler and her purchase of a used one luckily brought her into contact with a helpful seller who was surprised and concerned she did not want to even test-ride the bicycle. He told her what other equipment she would need and helped her get a discount at a local shop. Carlos mentored her on long Sunday bike rides. She did many dumb things, including learning about bonking on a century ride. But when the day came for the Ironman, all her preparation paid off and she came through the experience positively. It would have been a huge boost to the now 27 year old “former chubster.” But there are warning signs that all was not right:

“The real women of triathlon were svelte, accomplished, and fast, and I wasn’t any of those things. When I looked in the mirror I didn’t see someone who had lost 70 pounds or accomplished amazing feats of endurance; I saw the awkward, overweight chain-smoker I had been years before. I saw a loser. Turns out, the body can change its shape, but the mind is much less malleable.”

Unlike Carlos, who completed 13 Ironman races, the author was mostly content with the Sunday rides and improvement of her social life. Carlos tried to fix her up romantically, with very mixed but amusing results, but the demons in her life still beckoned and her drinking became a serious problem. Again, her friends, led by Carlos, helped to pull her back from the edge. And soon enough she would be one of those offering support to Carlos as he faced a far bigger challenge than any Ironman. 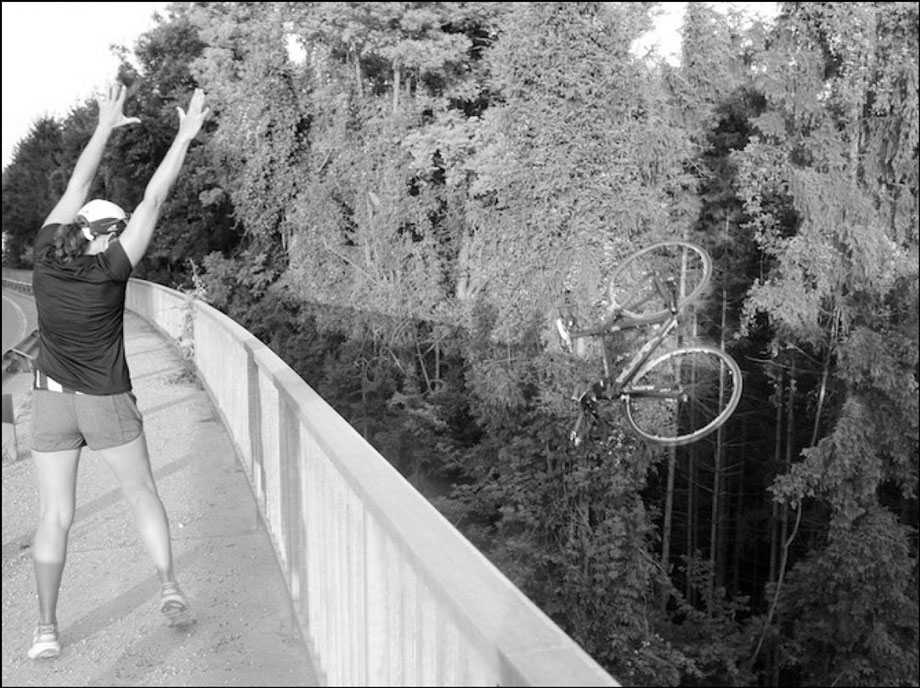 Susan Lacke has gone on to become a professor in Salt Lake City, an endurance athlete and someone who has made a career out of writing for sports publications—a far cry from what she would have once thought possible.

“Over the span of our 10-year friendship, my unhealthy vices disappeared one by one. Cigarettes were eventually replaced with running. Stress was hammered out on the pedals of a bike. And Big Gulps of Diet Dr. Pepper and tequila were replaced with post-ride Americanos with my new mentor.

I didn’t realize it at the time, but the Marlboro Light break outside my office building essentially upended my life, changing it forever.”

“Life’s Too Short to Go So F*cking Slow” is an affectionate story of average people who became athletes and how cycling or swimming or running became vital to how they saw themselves. No great work of literature, being often profane and direct but always honest and often very funny, this book is a tribute to a sometimes-prickly relationship that went from a mentorship of bike-coaching to one of life-coaching. There are many weekend athletes like Carlos Sanchez out there, people who might win an age-group race but never an overall one, people who love the challenge and overcome the pain, and people who can quietly (or provocatively!) inspire others. 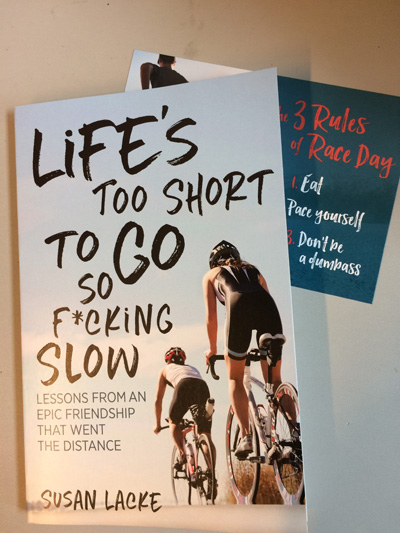 “Life’s Too Short to Go So F*cking Slow: Lessons from an Epic Friendship That Went the Distance”
by Susan Lacke
167 pp., paperback
2017, VeloPress, Boulder, Colorado
ISBN: 978-1-937715-65-6
Suggested price: US$18.95
For more information about this and other VeloPress publications, go to www.velopress.com
• Buy it at AMAZON.com here

When not wondering why he is so f*cking slow on his bicycle, Leslie Reissner may be found being epically friendly at www.tindonkey.com