Lombardia ’07: A Sunday In Como

Fall is a favorite riding time for many of us… cooler days, brilliant colors, re-connecting with your bike and yourself after a long season. For lucky riders in northern Italy, it’s also a chance to ride the corsa of the Giro di Lombardia the day after the pros – on closed roads. PEZ-Man Alessandro checked out this year’s the event…

It’s early Sunday morning and I’m still in the warm bed of the Bed & Breakfast where my wife & I spent this special Lombardia weekend. My mind is roving to the race events of the afternoon before. The villa is completely isolated from the world and everything is still around us. It’s dark and down in the plain, the lights of Milano shine coldly. 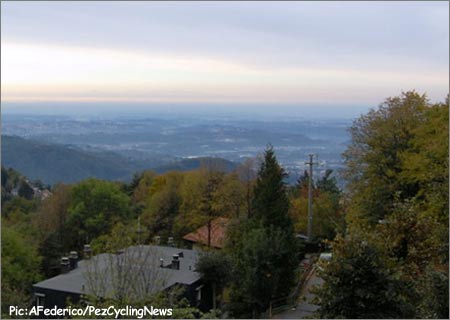 The villa is quite old, but comfortable and well equipped, and to every footstep the scrunch is transmitted everywhere.

It’s so early, and we are so tired from the race chasing, that we are still sleeping when we realize that another guest, in another room is waking up. I doubt that it could be breakfast time but a quick look to the window confirms that it’s still early morning, the sun is sleeping too.

We hear the person wake up, washing, changing clothes; we can hear everything. Then I clearly hear a well known sound. It’s the free wheel of a bike! I don’t mistake this. I would like to say something but I think that is better to not disturb Natalia to tell her that I’ve heard a bike rolling out of the door, considering her hostility against cycling in general.

“What is happening Ale?” she asks with thread of voice.
“I think they’re going to looking for mushrooms”. And there it ends. 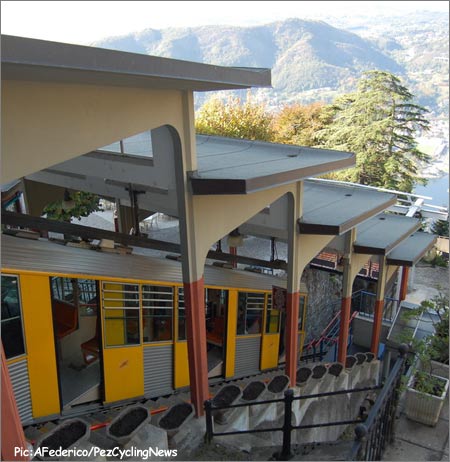 It’s a wonderful Fall morning in Brunate when we wake up. Brunate is a small town just above Como, linked to the city by funicular (average slope 46%!) or by a narrow road. Part of this road is crossed by the Lombardia route descending the Civiglio. 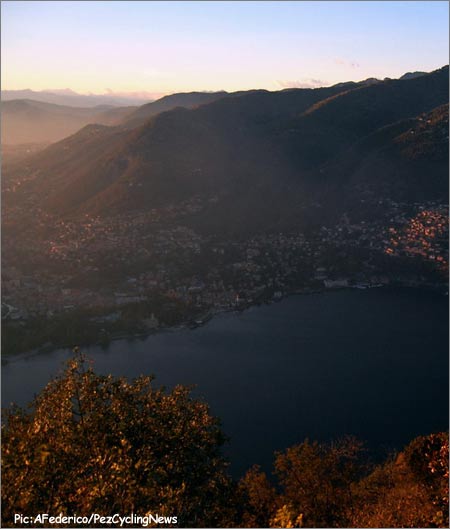 On the top of the mountain is a lighthouse; from there the view is amazing. We decide to go down to Como for a nice walk on the lake when it’s already lunch time. The breakfast has been huge and we have all the afternoon in front of us waiting for another Polenta dinner.

Two evenings before, when I proposed the Polenta for everybody, (typical north Italian speciality consisting in maize’s flour boiled and mixed with melted cheeses and sage usually topped with sausages) only Ed followed me. 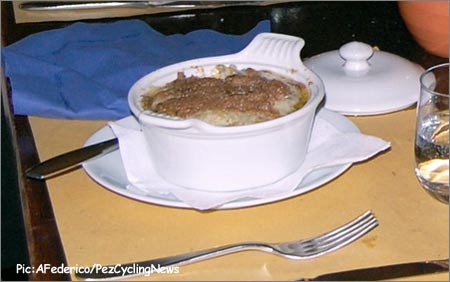 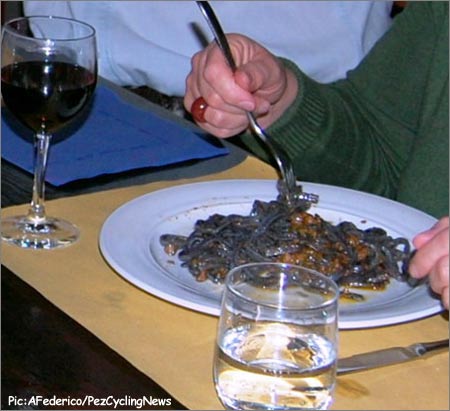 The ladies opted for the pasta (never a bad choice). A Gnocchi (potatoes flour pasta) with ragщ for Natalia and black Tagliatelle (wheat flour coloured by blackberry) with ragщ for Marlene. Their choices were not bad at all but at last they asked to share our Polenta with them. 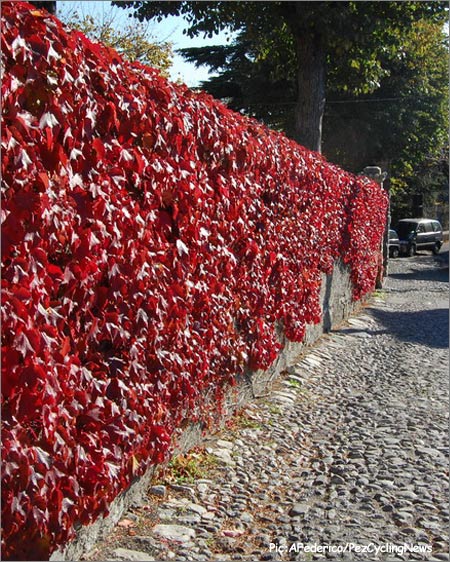 Coming down we are captured by the fall’s colours on the walls of the villas. The plan is to visit the old part of Como, get a look to the Duomo and then find some peace in the park in front of the race. Como is not a big city but is very crowded and on Sunday – everybody walks on the boulevard on the lake. Once we arrive at the base of the funicular we hear the RCS speaker voice.

“Just 20 km to the finish, the riders are climbing the Civiglio”.

How cool is that? Already one year has gone?

We approach the finish line of the Lombardia where still are mounted all the structures of the arrival village and the podium stage. Many people are waiting behind the barriers. We ask around and we realize it’s the Lombardia Fondo for amateurs.

Natalia says to me: “That was the noise I heard this morning while you were sleeping. A bike rolling out of our door.”
“Did you really hear it? I didn’t understand in was a bike!” Sometimes a marriage is supported also by small and innocent lies. 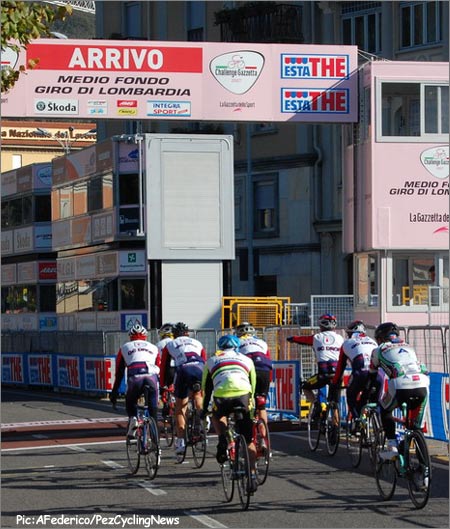 When the amateurs arrive it’s also a great show. Not for the first who are a bad copy of the Pro’s, but for all the others, especially the last. Two thousand people riding the last 70 km of the Giro di Lombardia. Someone exults crossing the line, someone else jokes with the others are trying to plan a sort of sprint. For everybody it is ready, few meters after the finish line a big table with drinks and beside it a huge pasta party. 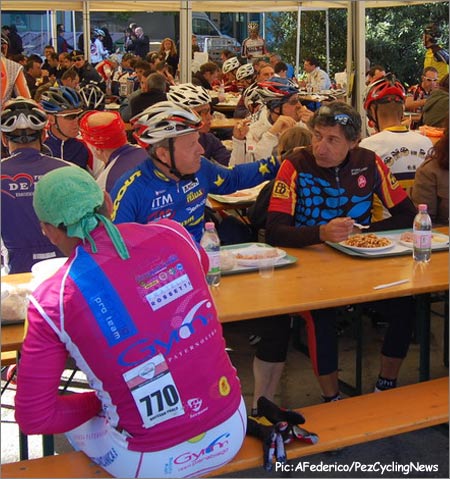 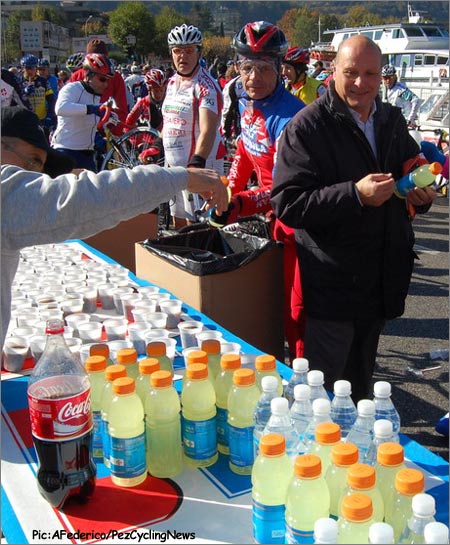 Despite this, many wait for the pasta a long time. We talked with some of them: for everybody the big attraction is the opportunity to ride on the roads of the Champions just 24 hours after the race. The problem is that the traffic is open counter flow and this is dangerous especially in the narrow road (and the route is full of them). Another weak point is the crossing of Como city. The traffic is just partially closed therefore the traffic lights cause some dangerous misunderstandings.

The final result is that the Como people are still furious to be blocked at home for two days but the amateurs don’t find the roads free. According to the direct stories the start has been very fast with a high pace till the Ghisallo. Therefore many were in trouble during the famous climb. At last we can say that this Fondo is for sure a great idea but the RCS must improve something, especially in safety for the next edition. 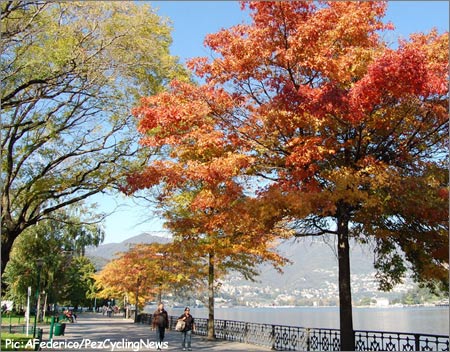 Now it’s really all. Everything looks now a sort of second life which has taken place in a remote past. The Lombardia, the lake, its colours, the leaves, the villas, the descents, the climbs, the bad experiences and the great ones. Everything mixed together.