Roadside Report: The Giro di Lombardia is always a highlight of the year for our Italian superfan Alessandro and this year he was fortunate enought to experience a perfect fall day instead of the rain of previous editions. Here’s the story of his day out chasing the ‘Race of the Falling Leaves’

When you choose to chase the Giro di Lombardia you know that most probably it will be cold and possibly will rain too. But Sunday morning after an early wake up and a long drive I realized that it was going to be a warm sunny day; that was more than enough to mark the whole day as a good one.

Everything comes easier with sun: pictures, drive and that short spare time between two race passages and pursuits, that you like to dedicate to yourself and to your friends. This is the story of how my day out to watch one of the monument Classics of cycling went.

To chase a classic is always very stressful: you need a lot of study to plan the race passages and a lot of experience to realize that plan. That’s why Lombardia is the most difficult to follow live: the organizers change the route every 4-5 years. When you barely know the tricks, they change the game! 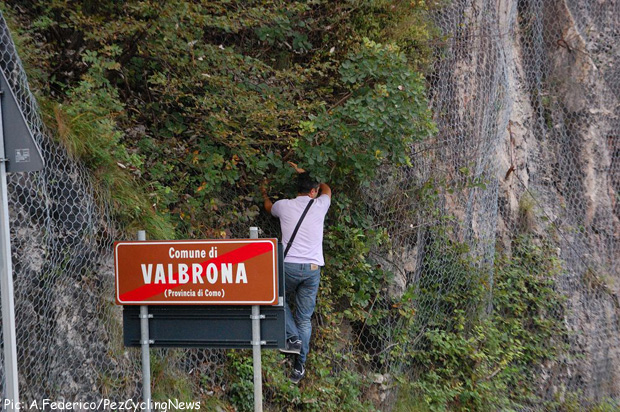 One trick – climbing for a good picture!

This year the departure was in Como, next to the Swiss border. One of the worsts locations they could choose to start the chase. The traffic is very heavy and the local roads very complicated. But going there is compulsory, in order to grab the credentials and the special pass for the car, that can make the difference from a total failure to a B plan. Or even C plan sometimes.

Once again I was with my friend Salvatore, who seems to like this kind of adventure and helps me with the drive. To have a driver is the latest addition to my race chasing but is really important for the final result. To give an example, I’m writing this story while he is driving on the way back home (more than 400 km), and that makes the difference if you want sleep a bit the night after the race! Salvatore is not a cycling expert and even not a cycling fan, but he has already understood these days chasing pro races are more an adventure than a day just dedicated to cycling. 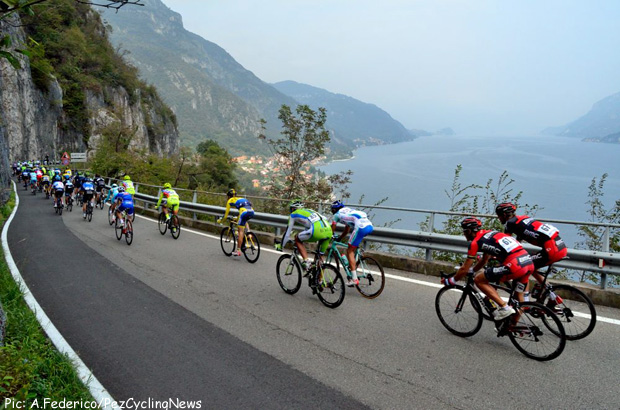 Was it worth the climb?

Forgetting about understanding anything about the race, if you want to follow the tactics and watch the action it’s of course better to remain at home, avoid a lot of frustration and catch it all on the TV. On the road you will not understand anything about the race action but you will smell it and truly feel it. I like to say that what I do it’s not for the race, but for myself. Simple as it is: I like to grab some moments with my camera and write down my feelings. That’s cycling as I can see it.

The new route is just as hard as was the old one. Full of climbs, starting with the Ghisallo. A breakaway is out on the way to the lake and many good teams are well represented there. The bunch proceed quietly and you can understand that things are ‘tranquilo’ by the talks of the riders inside. It’s Sunday and there’s more people than usual on the road, the good weather is a big boost for the families who want to spend some time out. The winter is at the door and any free afternoon of sun is an opportunity you can’t really miss. 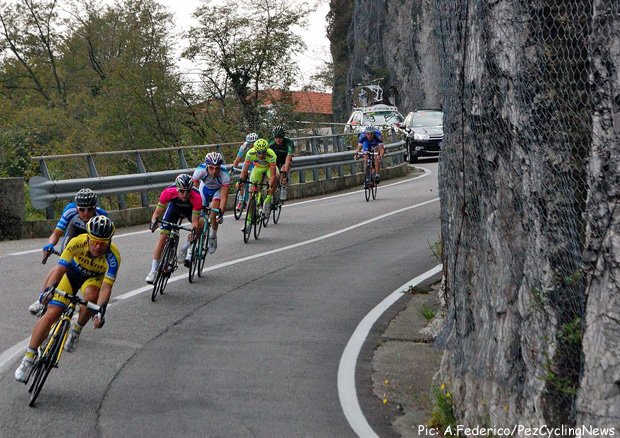 The early break descending to the lake 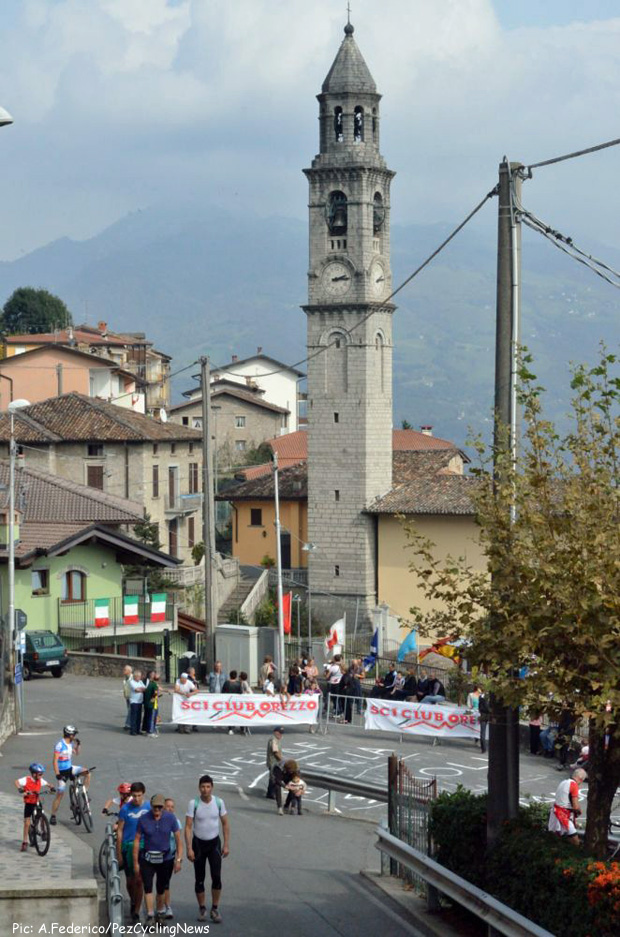 Orezzo, on the way to Colle Ganda

While moving to the second passage of the day, the Colle Ganda, I think that the race of the big names should start over there. It’s a 1000 meter elevation climb and for a one day race is a lot. On the way to the top of the climb we discover that in Orezzo there’s a restaurant that is promoting their pizza. Pizza and beer for 6€, we can’t miss it. Surprisingly our friends Angelo and Paolo had the same idea and are alreay there. So, from 2 people now we are 4 people and that is even better. The pizza is very nice and we switch from cycling to politics to economy and to jokes, in our discussion. But the race is coming, so Angelo and Paolo leaves because they want go to the top, hoping for a good action over there. We will meet anyway next Saturday, in Bologna, for the season closing at Giro dell’Emilia. 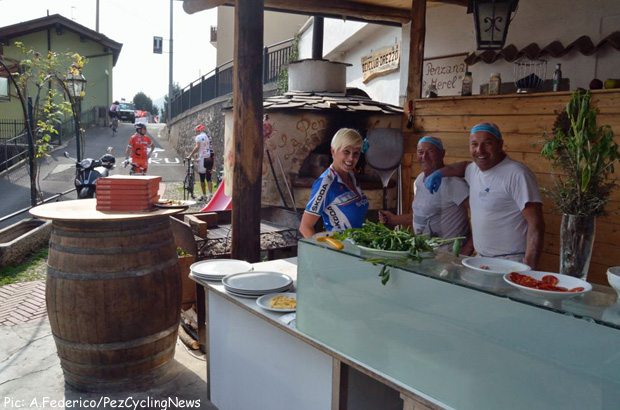 These smart guys were promoting their pizza 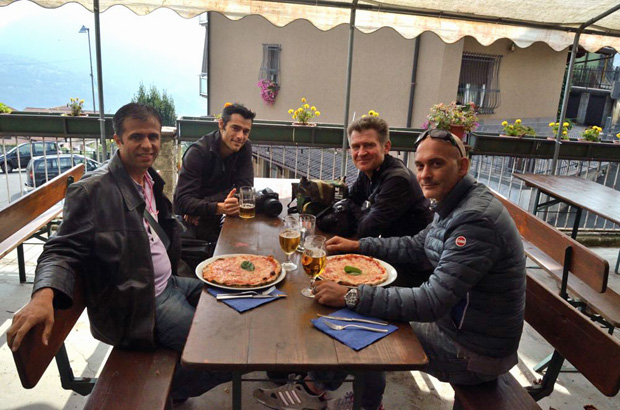 And the pizza was good, especially in good company!

Me and Savatore remain in Orezzo, waiting the race. However the passage is quite disappointing. The break is still ahead but in the bunch nobody really moves a finger. ‘Tutti insieme’, all together, my friends: what are you doing? A classic should see some more battles but I understand that probably all legs are really very consumed at this point. The season is almost over and nobody has got the excellence to risk anything. I understand that a big group will come packed onto the final climb. The decisive move will then come on the Boccola, the ancient road passing through the ancient walls of the old town. 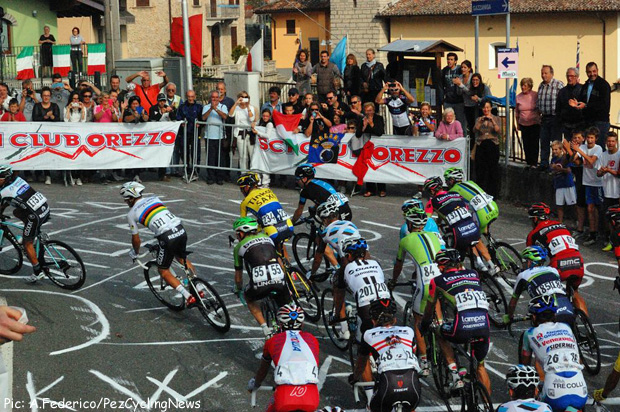 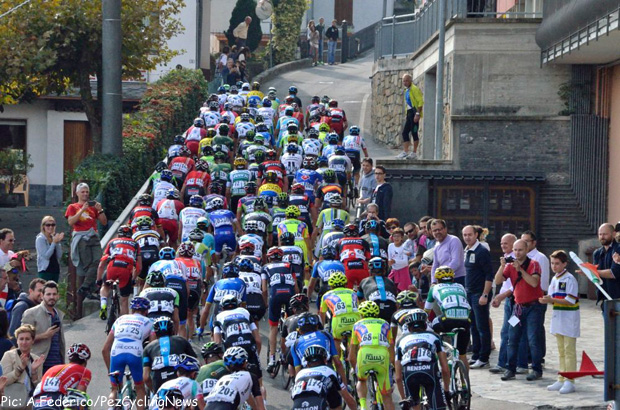 There is a lot of people waiting the race there. Many families and all very happy to watch a special event as the Giro di Lombardia is. It’s ten years that Bergamo has the finish (and they got it after a long dispute with Como, that probably will guest next edition). The sun is bright but its light is very sharp, you can immediately understand we’re in fall. A warm sunny day, but no doubt: it’s fall! Now the race comes and all the people are very excited. 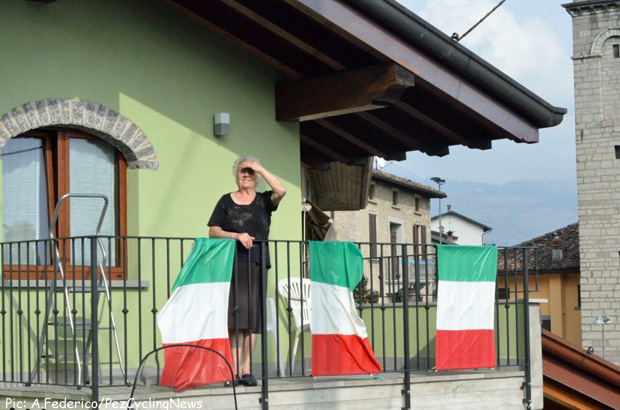 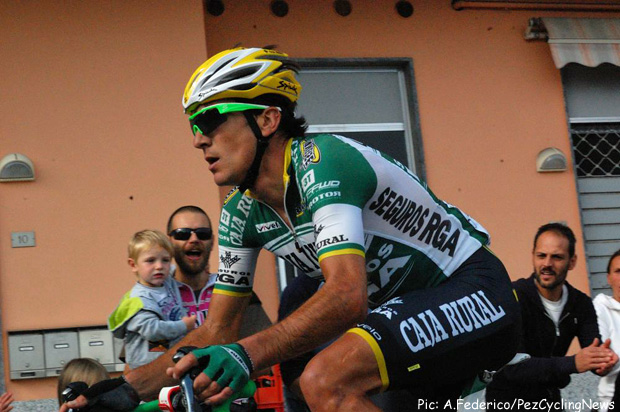 There is also a special tifoso on the road today: I recognize Michele Bartoli on the roadside, waiting the race as a common spectator. 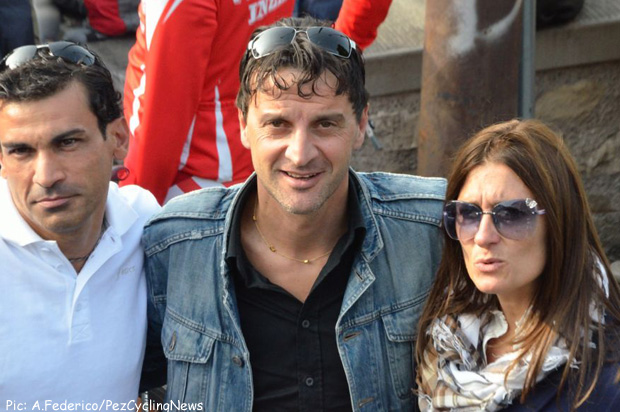 This guy is a cycling legend; he won a Flanders, two Liege, a Fleche and two Lombardia! It’s very strange he is not at the finish line, but this means to me that he is really passionate of this sport. He could have interviews and parties at the village, but he prefers the confusion and atmosphere of the roadside like me. Good Michele! 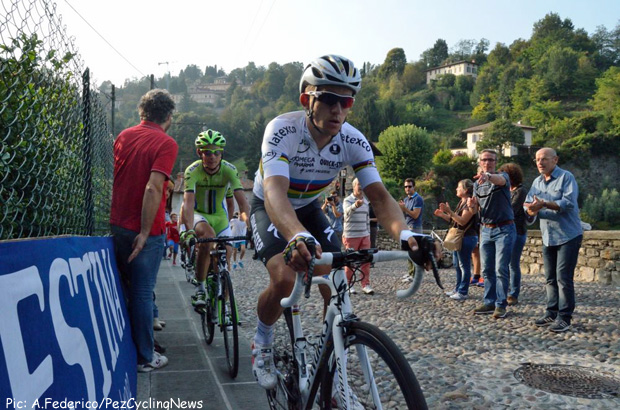 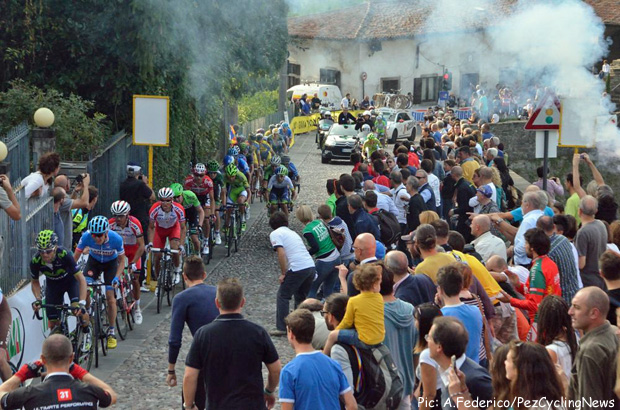 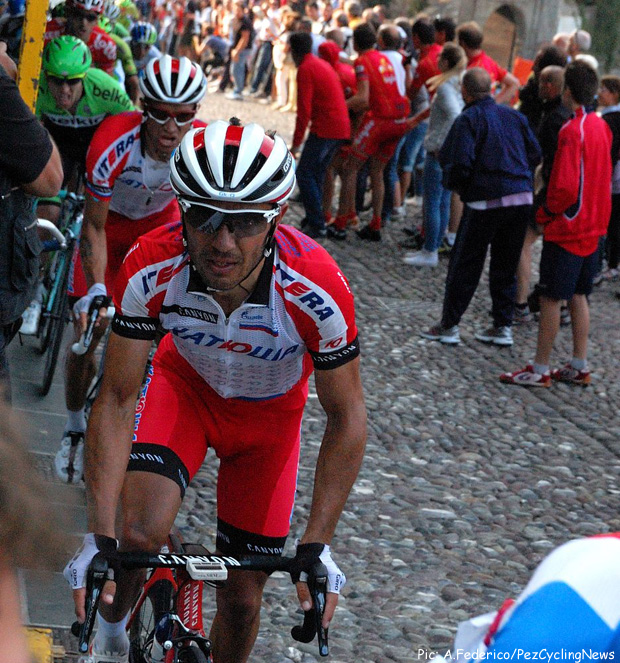 The race pass. Wasn’t maybe a memorable edition of Giro di Lombardia, but finally won by a very strong rider. Someone who deserves to be inside the golden book of the race. Thoughts are going to all good moments passed today and during the whole year, starting from the Strade Bianche last March. It’s too early to say goodbye, next Saturday still is there the Giro dell’Emilia, with its arches full of history and people. A week more and the season will be really over. But now the evening is too lovely, to say goodbye.

Sergey Lagutin on the podium of Tour of Almaty