Lombardia Photo Special: Saturday’s Il Lombardia didn’t disappoint with top cycle sport action along with the stunning scenery of Lake Como. Esteban Chaves took the win and we have a selection of the best photos of the day from the race organizers, RCS, and ace photographer Cor Vos.

The Giro di Lombardia is one of the most beautiful Classics on the calendar. Milan-Sanremo has the excitement of the start of the season with spring in the air, but the ‘Race of the Falling Leaves’ is the finalé of the year and has the back drop of the lakes and mountains of Northern Italy. 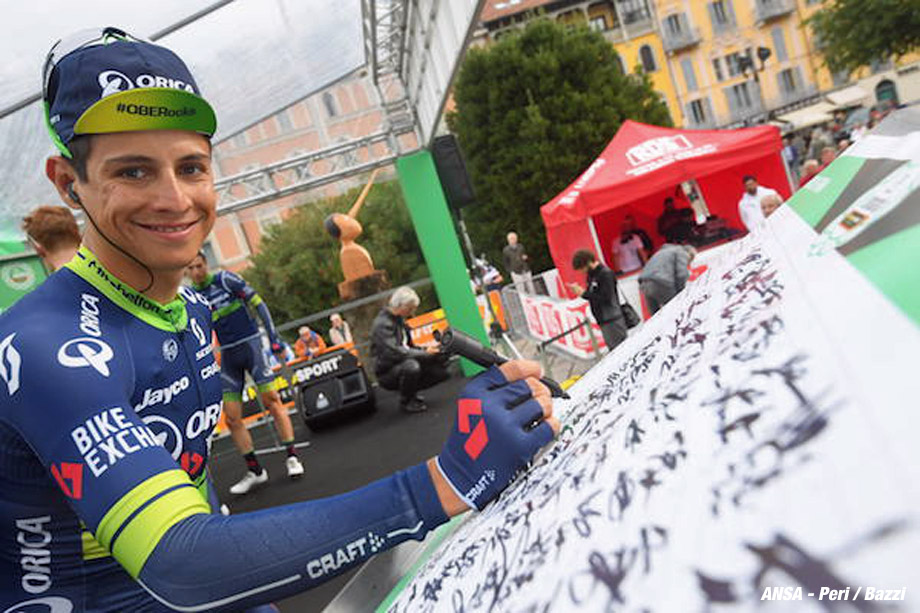 In its 110th edition, the Classic of the Falling Leaves was won by Esteban Chaves (Orica – BikeExchange) almost one year after he opened the record book of the Abu Dhabi Tour. With a second place at the Giro d’Italia and third at the Vuelta a España, victory at Il Lombardia has rounded out an excellent 2016 season for the Colombian; Chaves clinched victory when he out-sprinted Diego Rosa (Astana) and Rigoberto Uran (Cannondale-Drapac) in Bergamo to become the first non-European winner of Il Lombardia and the first Colombian winner of a cycling Monument. Tour de France runner up Romain Bardet (AG2R-La Mondiale) accompanied them till the last climb. All the key favorites were up there in the grueling finale. 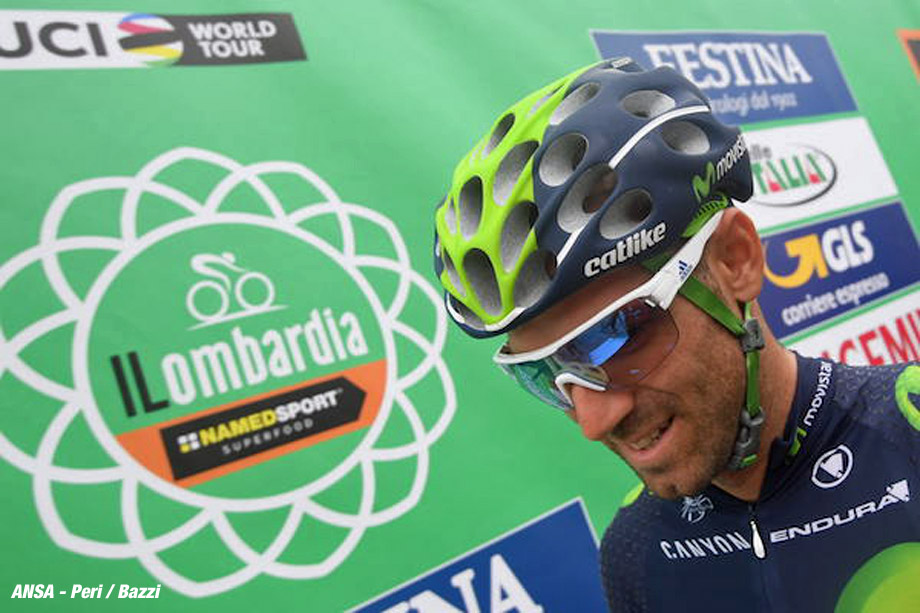 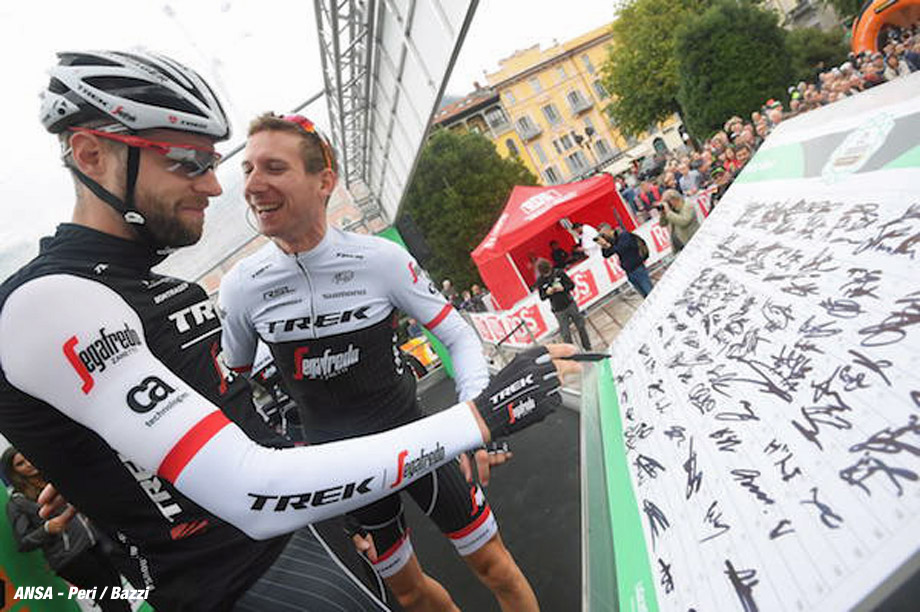 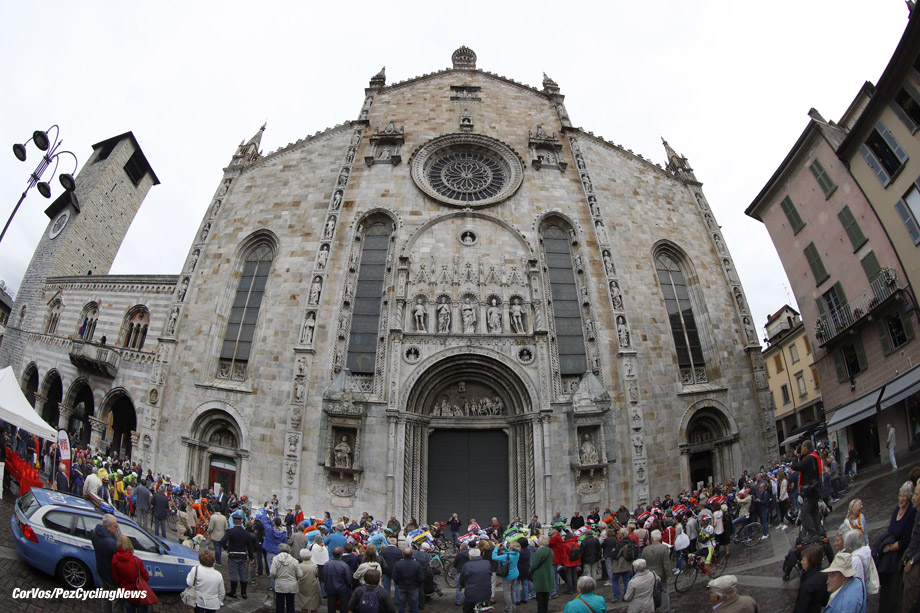 The town of Como gave the Giro di Lombardia a great send off. 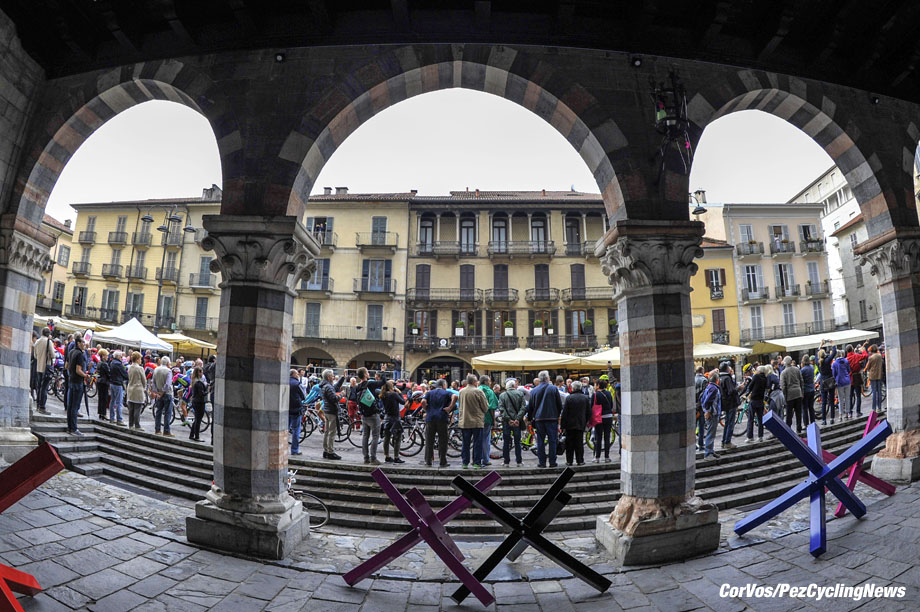 A round up of Il Lombardia wouldn’t be complete without a photo of the peloton passing the church at the top of the Ghisallo. IAM Cycling’s Stefan Denifl was first to the summit. 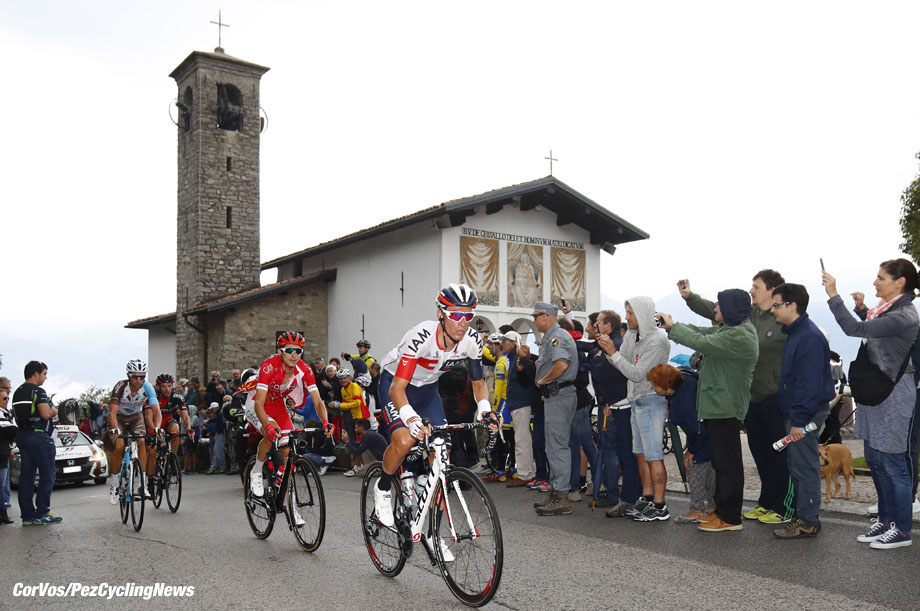 The bunch was al full gas on the shores of Lake Como. 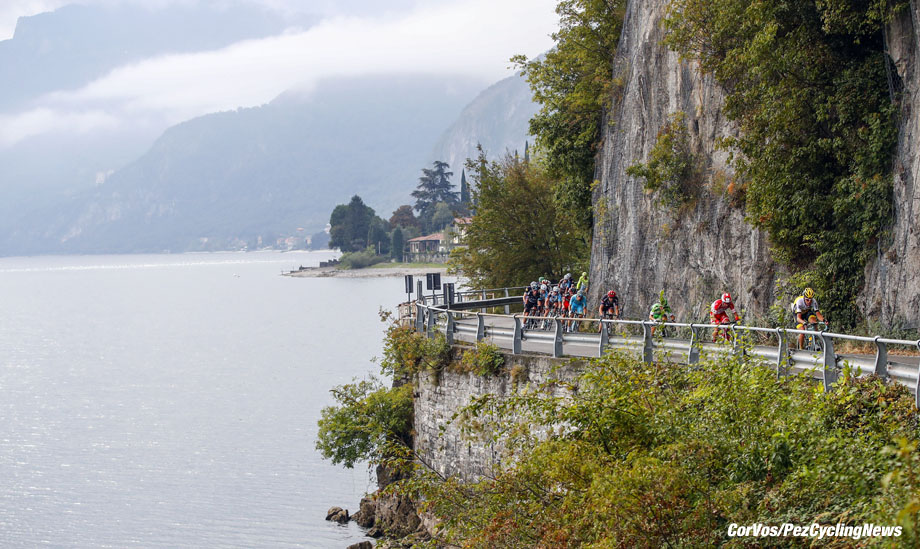 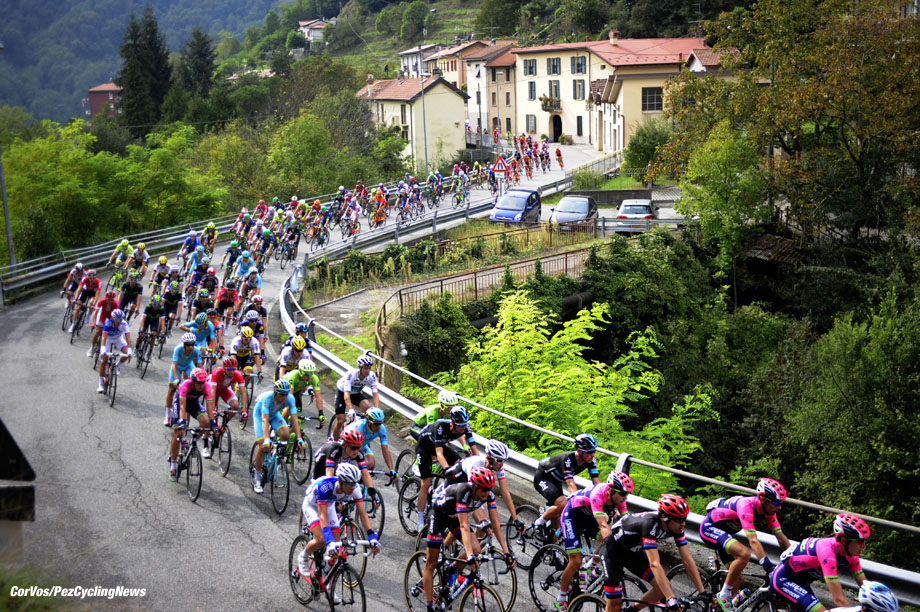 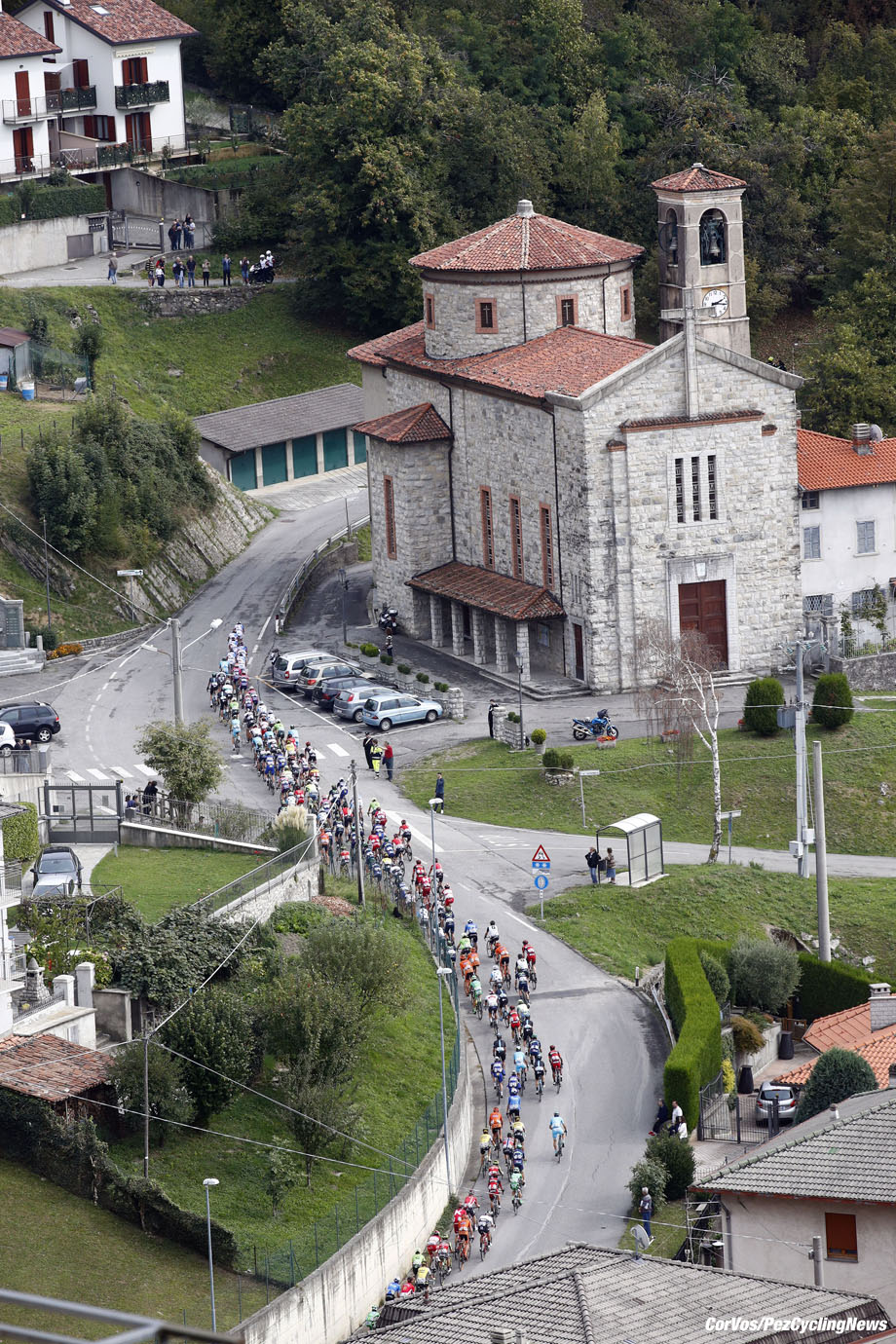 Climbing away from the lake towards the race finalé on the last murderous 100 kilometers. 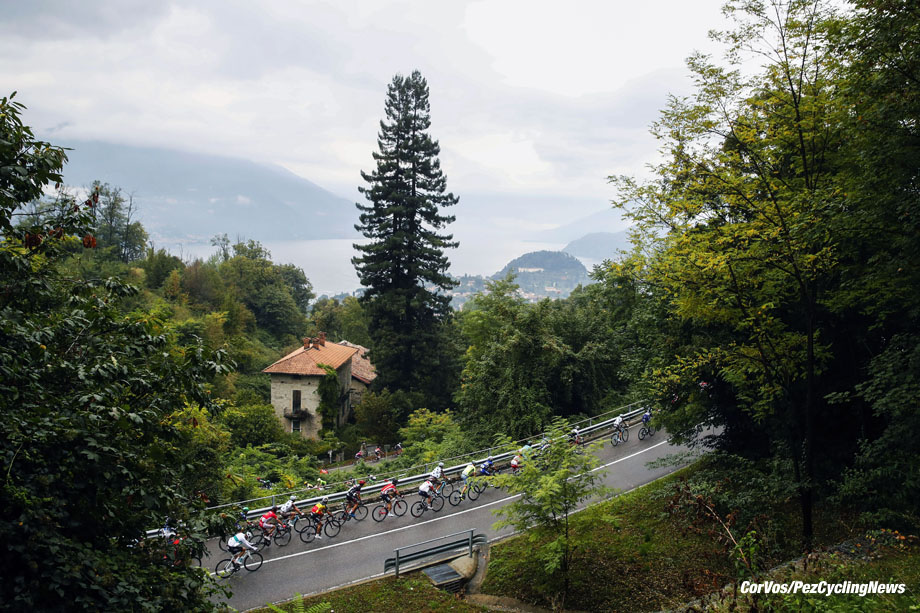 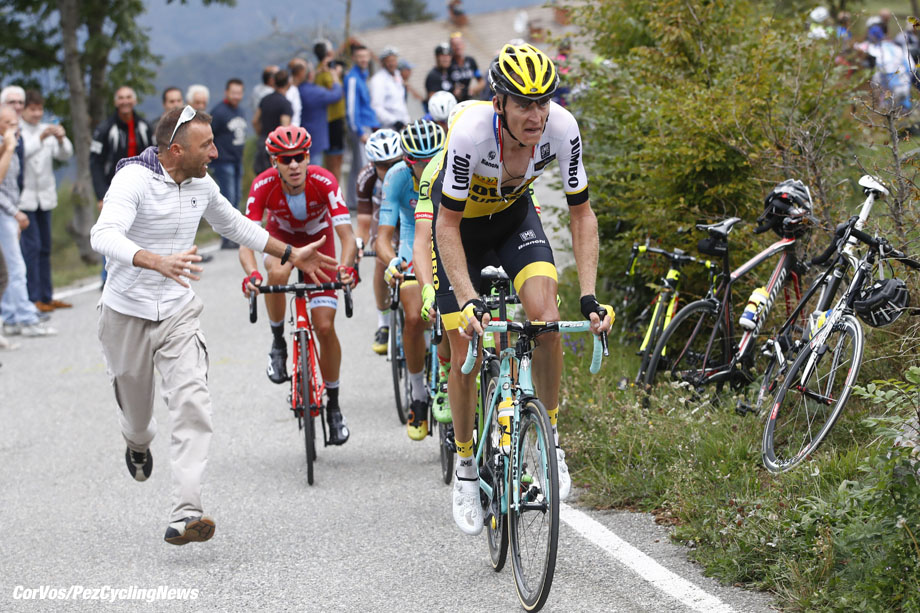 Robert Gesink (LottoNl-Jumbo) was one of the strongmen of the race, but he missed the move from Chaves to finish in the chase group at 1:24. 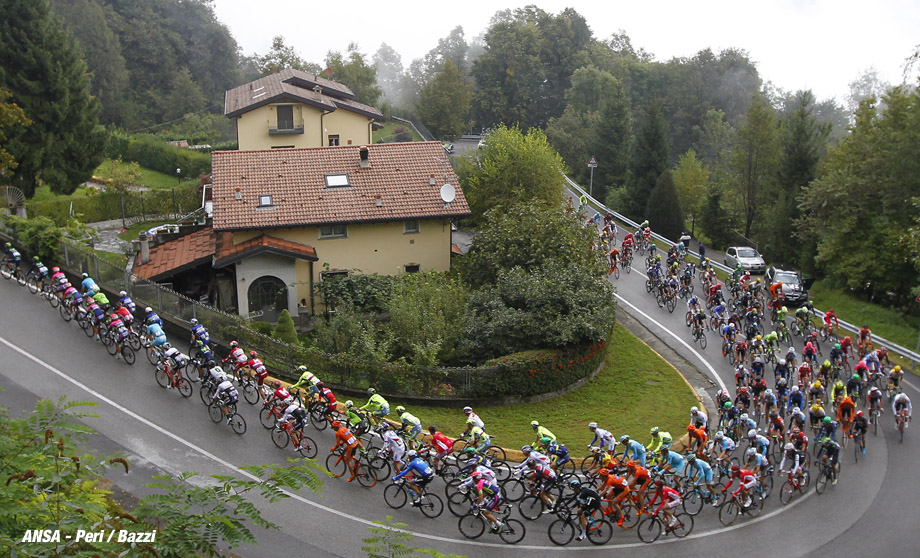 Lombardia is very green at this time of year, yes it rains a lot! 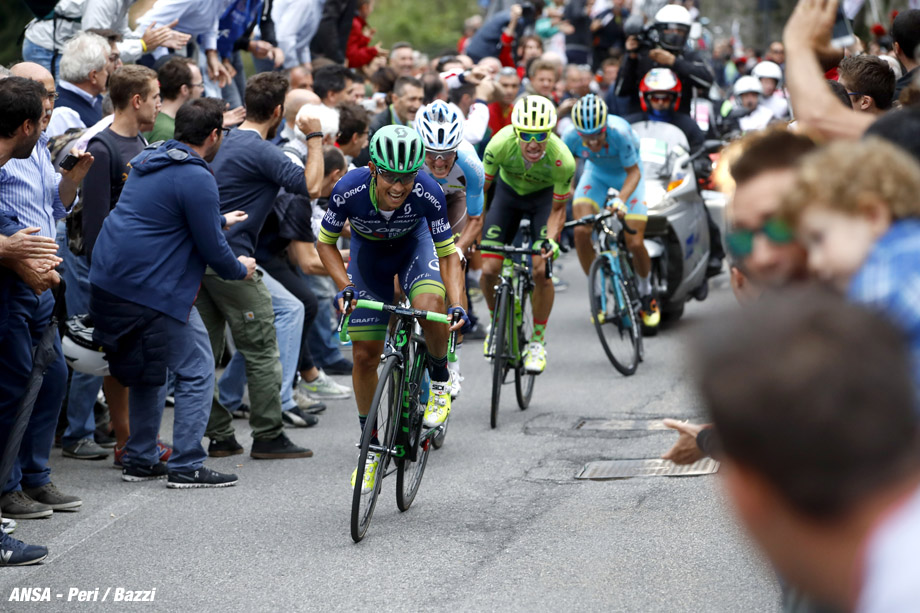 Orica-BikeExchange’s Esteban Chaves has had a great 2016 season with podiums in the Giro and the Vuelta, his attacking style took him away it the winning break in Lombardy. 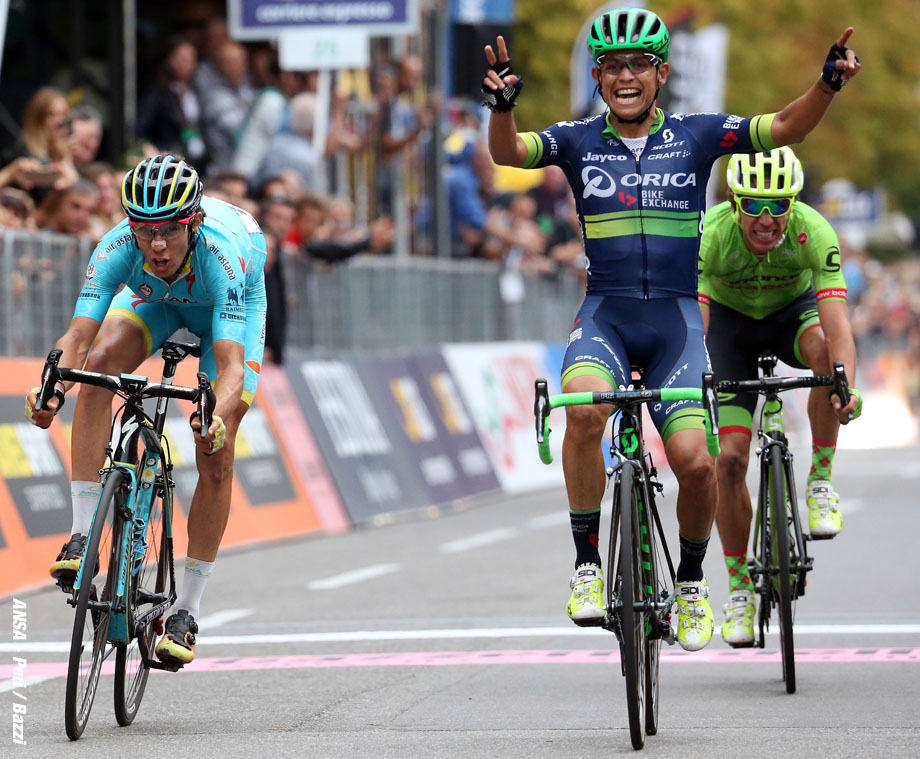 Diego Rosa (Astana) was the danger-man in the break and Chaves and the other Colombian, Rigoberto Uran (Cannondale-Drapac), knew it. The Colombians tried to distance the Italian, but he clung on and put in a couple of strong attacks. 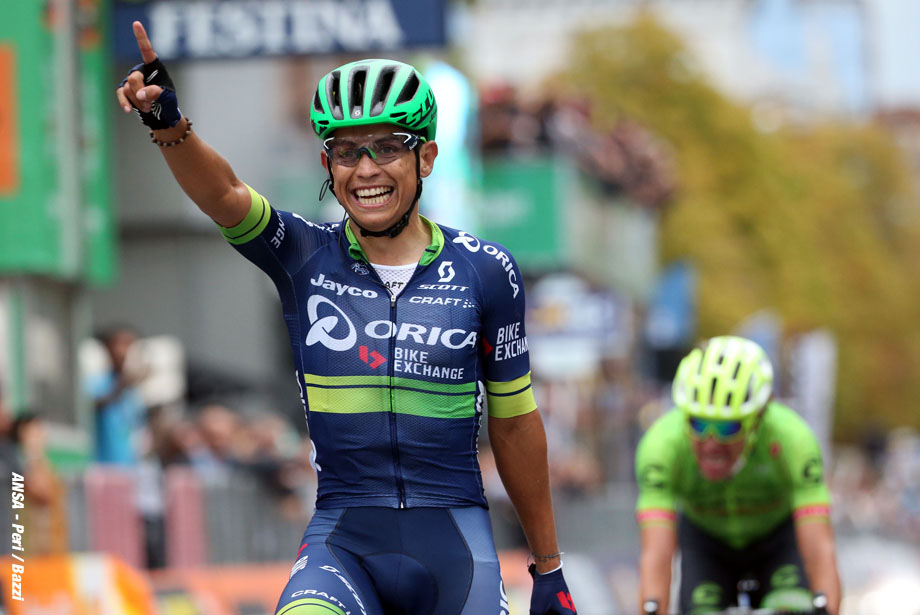 Rosa must have been fairly confident as he led out the sprint – with a last lunge Chaves had the first Classic win, for him and his country. 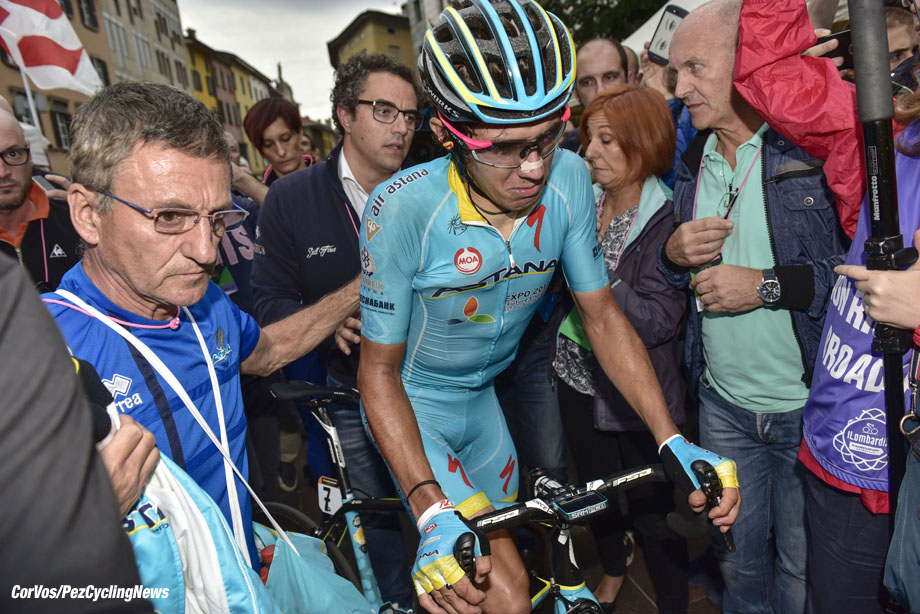 Diego Rosa was heartbroken with his 2nd place. 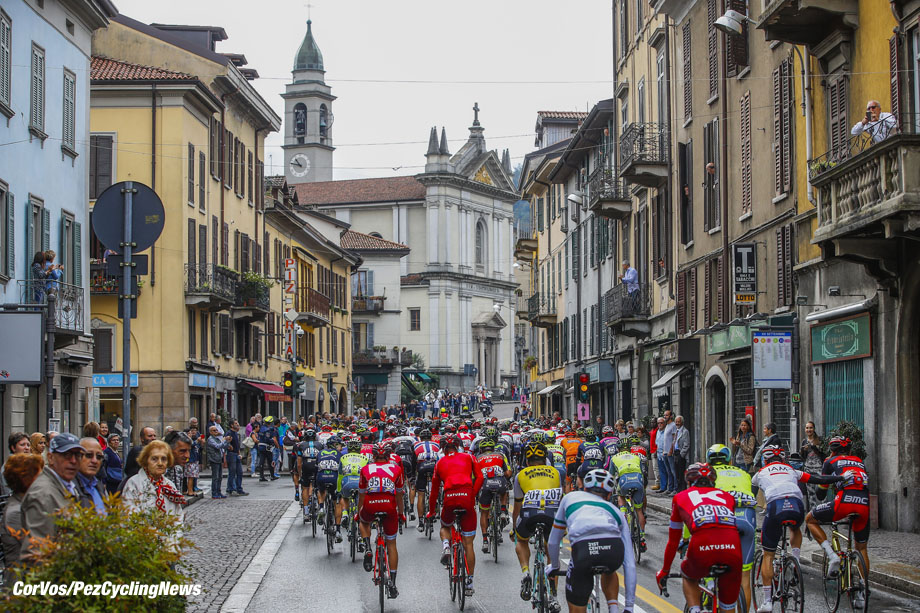 It was a wet peloton that rode through Bergamo to the finish. 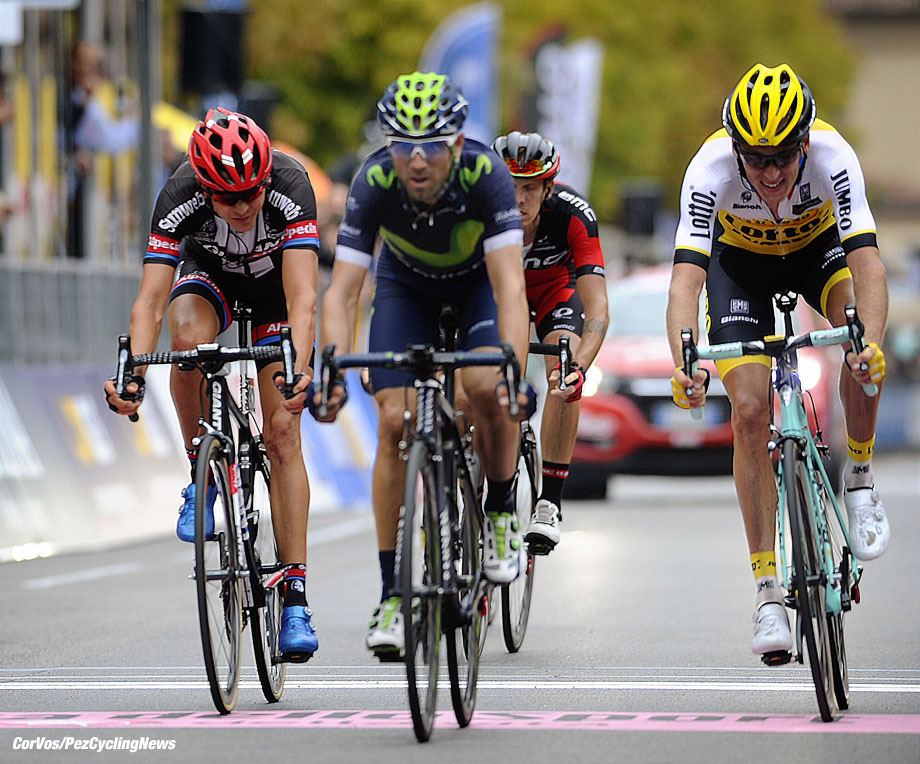 6th for Alejandro Valverde, taking the sprint from the chasers. 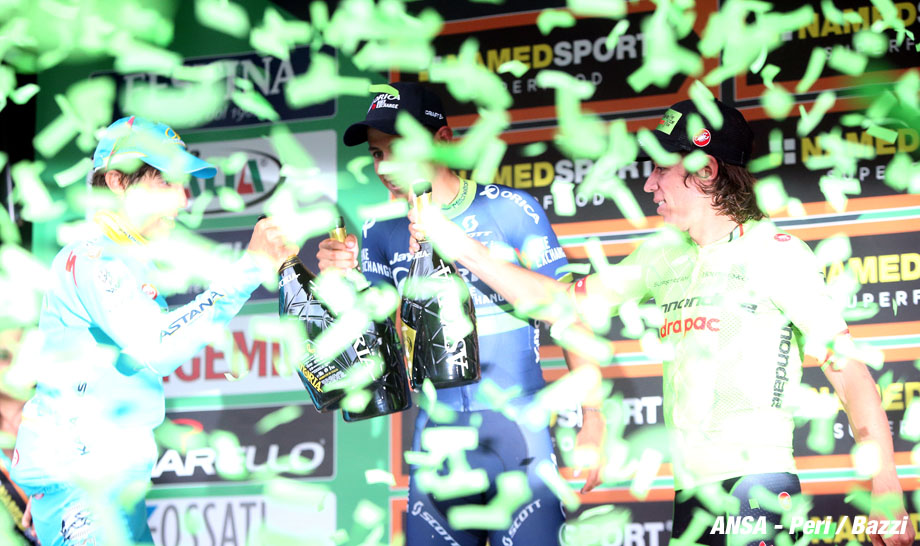 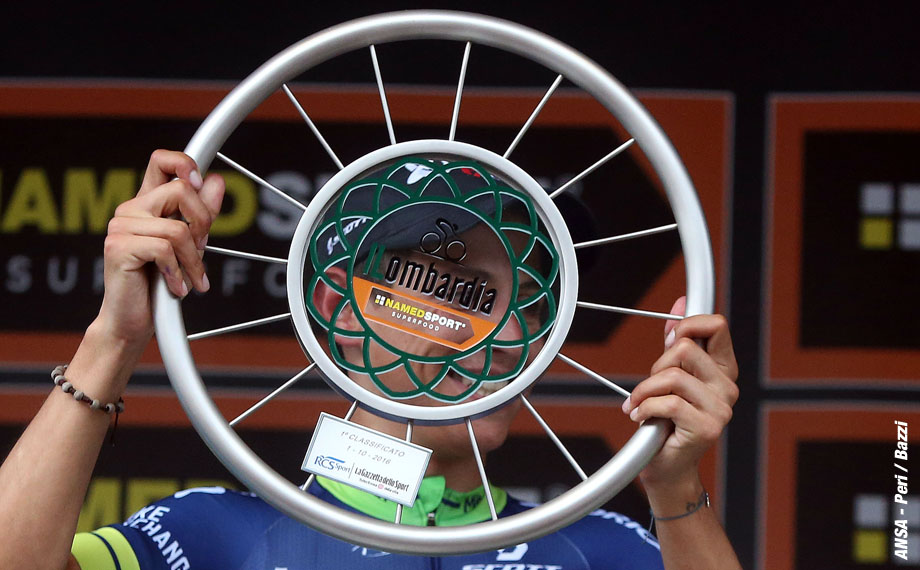 There will only be one of these trophies in Colombia. 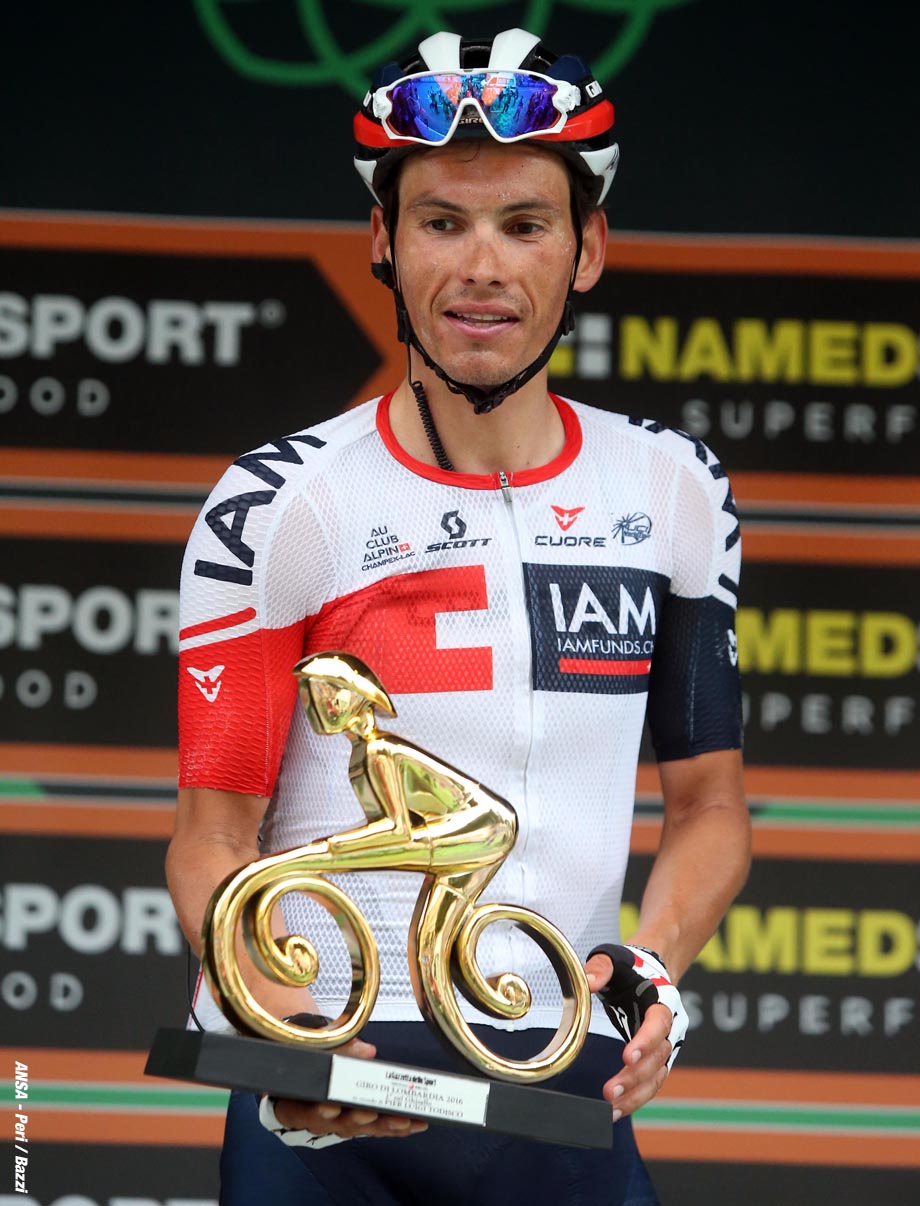 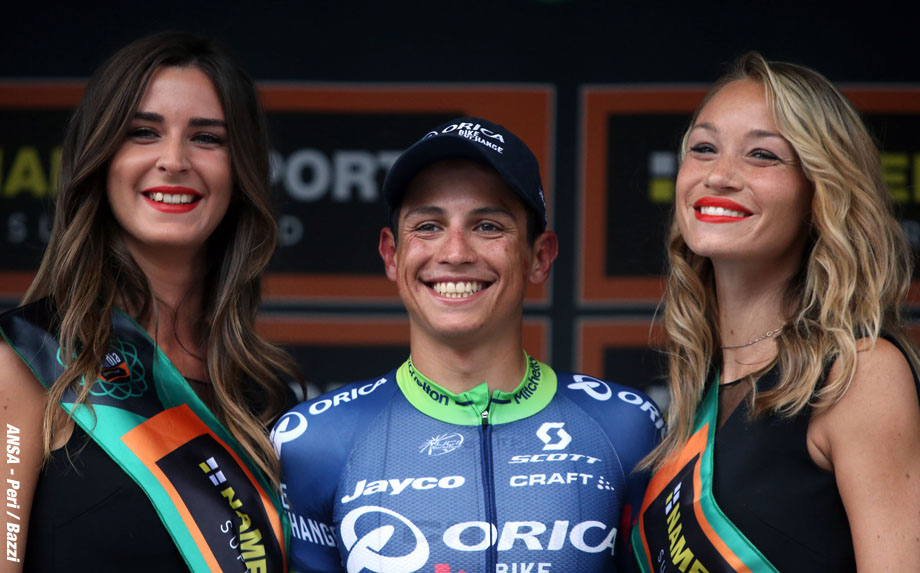 Chaves said after the race: “It’s a big thing for me to become the first non-European to win Il Lombardia and the first Colombian to win a monument.” His feelings were echoed by countryman Uran: “It’s a big day for Colombia.”