The 2016 Tour de France is only round the next corner and as part of the PEZ-Tour build-up, our most experienced Tour follower, Ed Hood, takes a walk down memory boulevard to revisit his first Tour as an accredited journalist in 2006. It was strange race with a less than ideal outcome, but Ed didn’t know that at the time.

With the buzz of the Giro still in my blood and flights and hotels about to be booked for the Tour, it dawned on me that it’s a decade since first I picked up my ‘creds’ and was let loose on the roads of France. I thought I’d share a few memories and faces from my last day on that 2006 Tour, Stage Eight from Saint-Meen-Le-Grand – birthplace of triple Tour Champion, Louison Bobet – to Lorient, where I once raced as a youth – but that’s another story. 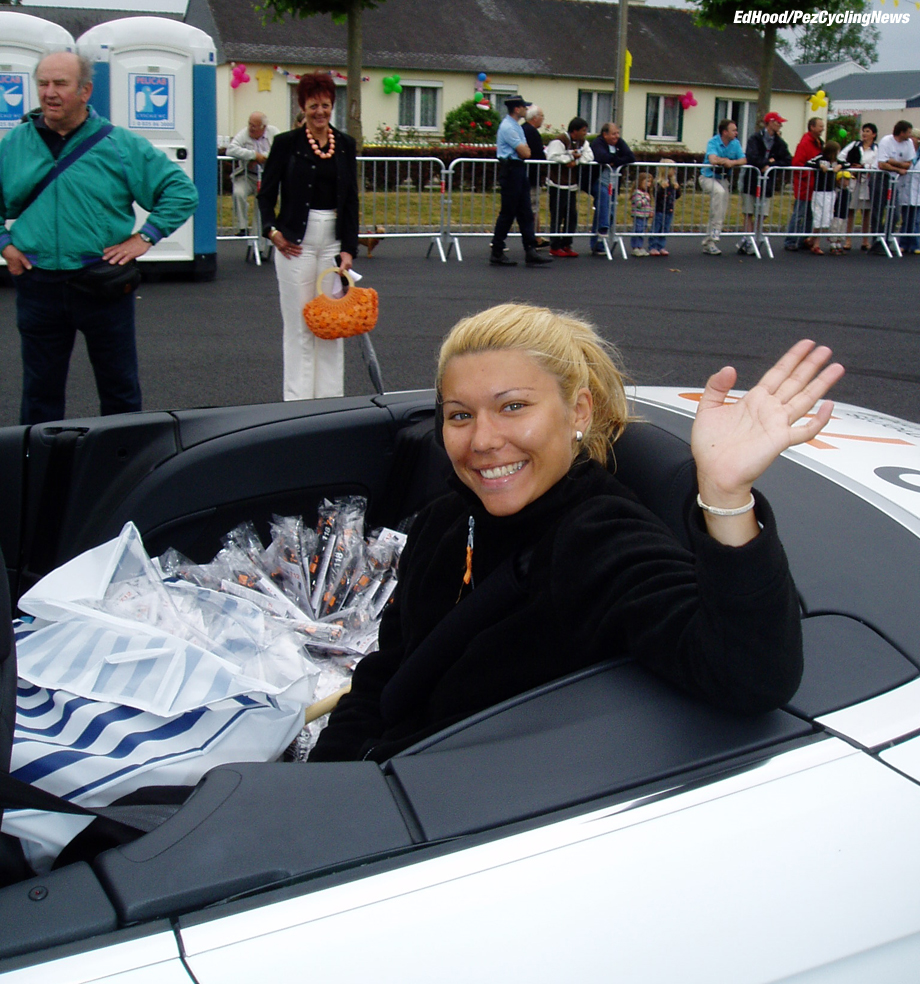 We know that in this politically correct world all the girls on the race are selected for their personality and intellect rather than appearance – it’s just a coincidence I’m sure that they’re all so damned attractive. . . 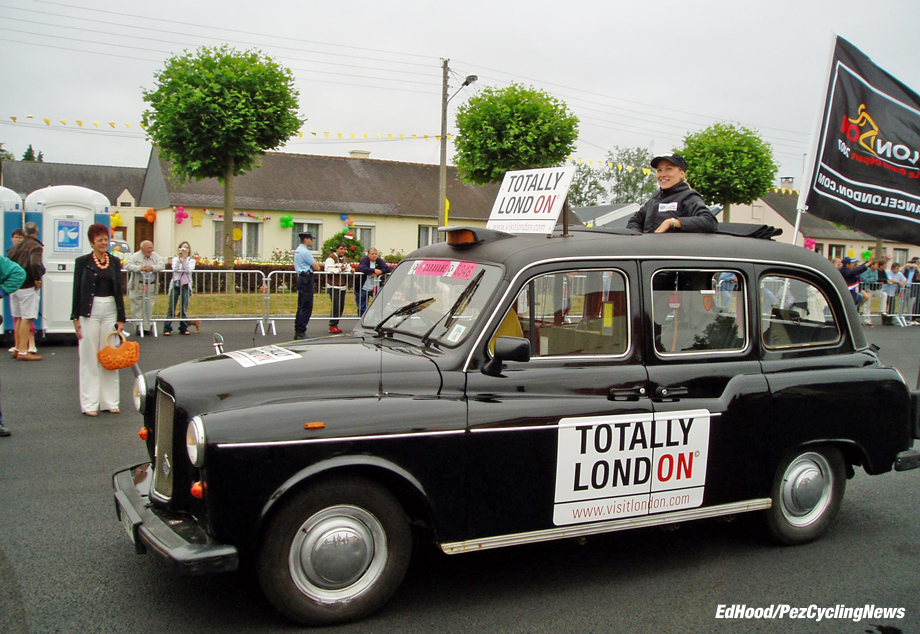 Each year the Organization has representation for the next year’s race on the caravan; 2007 would be London looking fab, Cancellara rampant, huge crowds and Robbie McEwen at his rapid best. 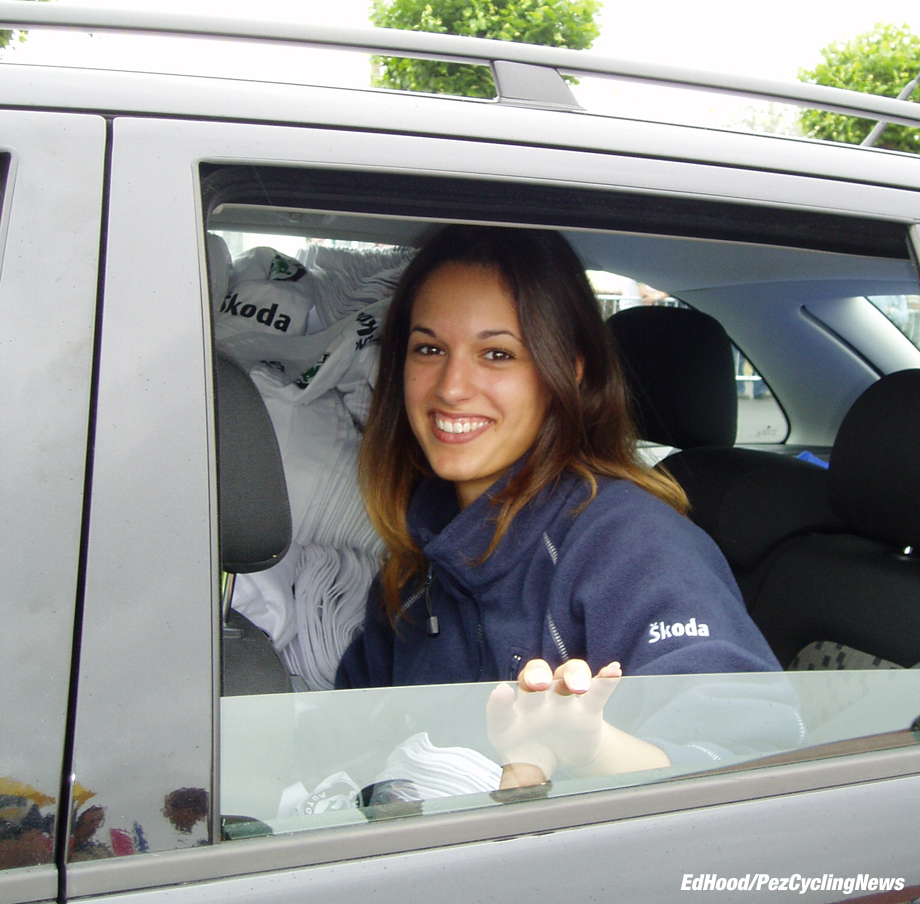 Skoda hats, they’ve saved me form sunstroke many a time – tens of thousands of them get fired out of those car windows. I have a cache of them – and always a reserve one stashed in the back pocket of my gillet. When Euskaltel were in their Pyrenean pomp, Skoda distributed orange hats – you could trace the line of the climb by following the orange clad heads. 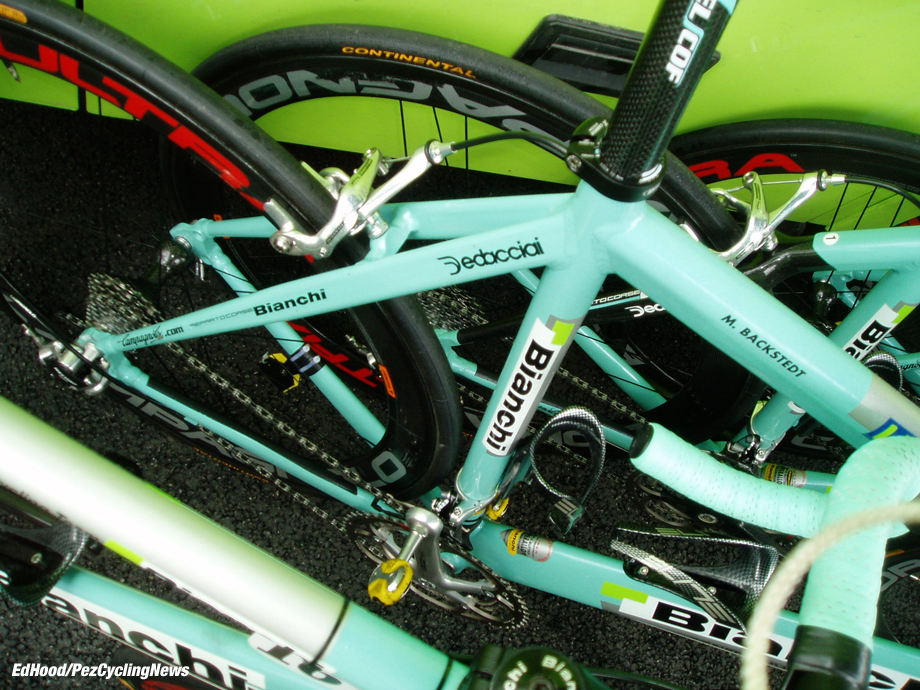 And ‘aloominum’ as you would have it on the far side of the Atlantic was still king in the peloton. This is Magnus Backstedt’s Bianchi; big tubes, big welds to match that lovely ‘celeste’ paint job – but metal was soon to be rendered obsolete as the race to ‘carbonise’ gathered pace. It won’t be long ‘til steel comes back. . . 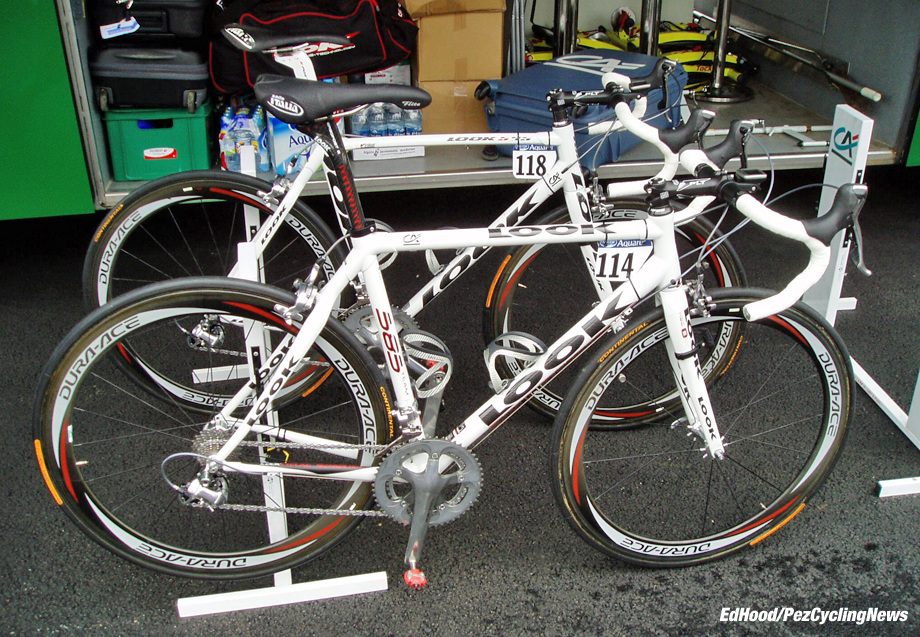 French manufacturers LOOK have always been at the forefront of the carbon revolution; lugs and tubes were still the number one method of forming a frame a decade ago – but monocoques would be along in a minute. 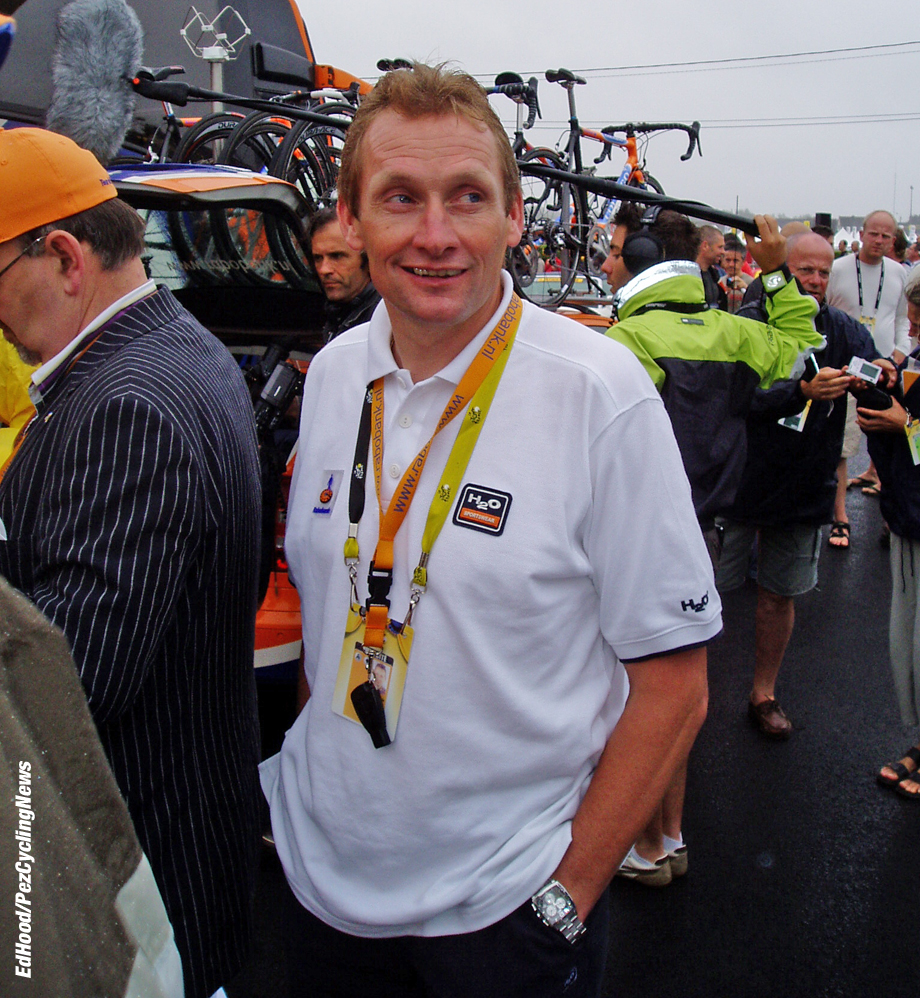 Le Tour is like the armed forces, ‘it looks after its own’ with all manner of ex-pros on the race doing everything from driving V.i.P. cars to working with the race telecoms and planning the route. This is former ‘Capo’ of the peloton. ‘cross world champ and Flanders winner, Adri van der Poel, still looking fit – these days he mechanics for former world cross champion son, Mathieu. 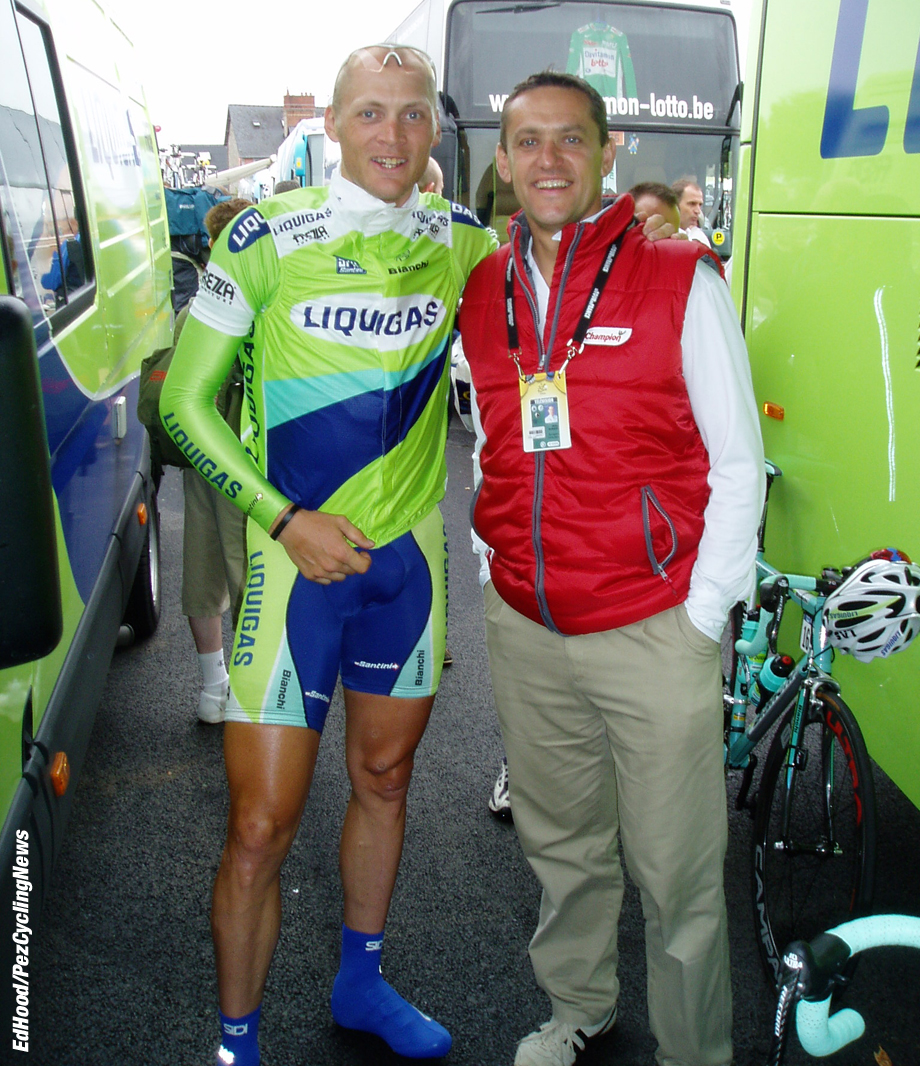 Flanders winner Jacky Durand is another ex-pro who’s swapped his role as ‘baroudeur’ for commentary and journalism but still looked fit and was hugely popular. Roubaix winner, Backstedt was a Liquigas man back then and he too has gone down the commentary route with Eurosport. 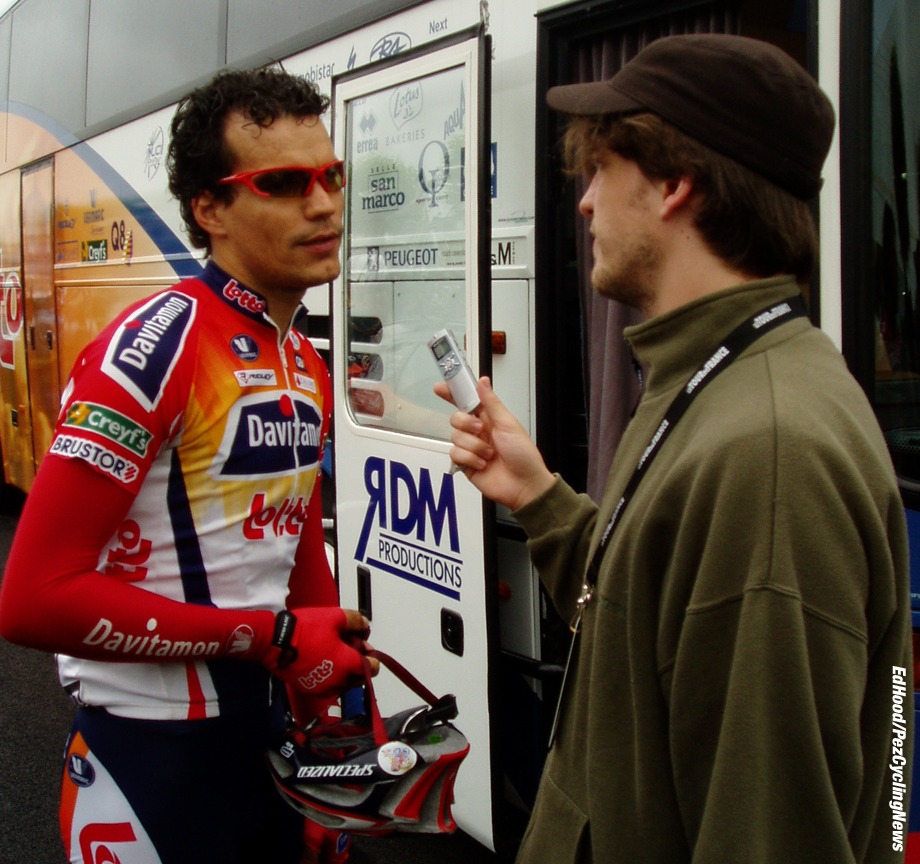 Gert Steegmans is a rider I feel we never really saw develop his true potential; big and strong but he never really ‘broke through’ despite two Tour de France stage wins and two years (2007 & 2008) with Quick-Step where he took 11 UCi wins in each season. A move to Katusha for 2009 was a disaster and whilst he would go back to the Belgian team he never again achieved the results he was capable of. 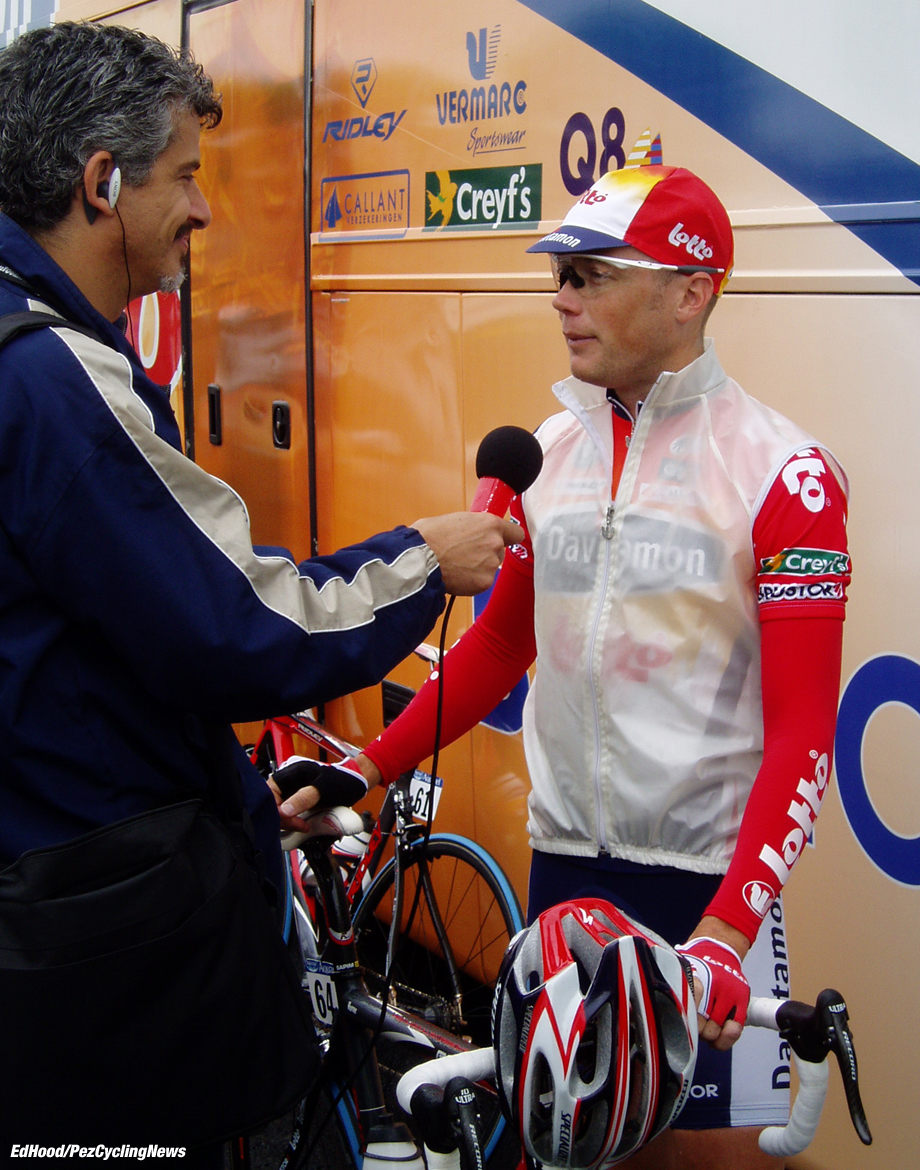 And who’d have put a wager on Chris Horner winning a Grand Tour almost a decade later – he’d finish 64th in this Tour, albeit 2006 saw a stage win in the Tour of Romandie and top ten finishes in that race on GC, Paris-Nice and Liege-Bastogne-Liege for the American. 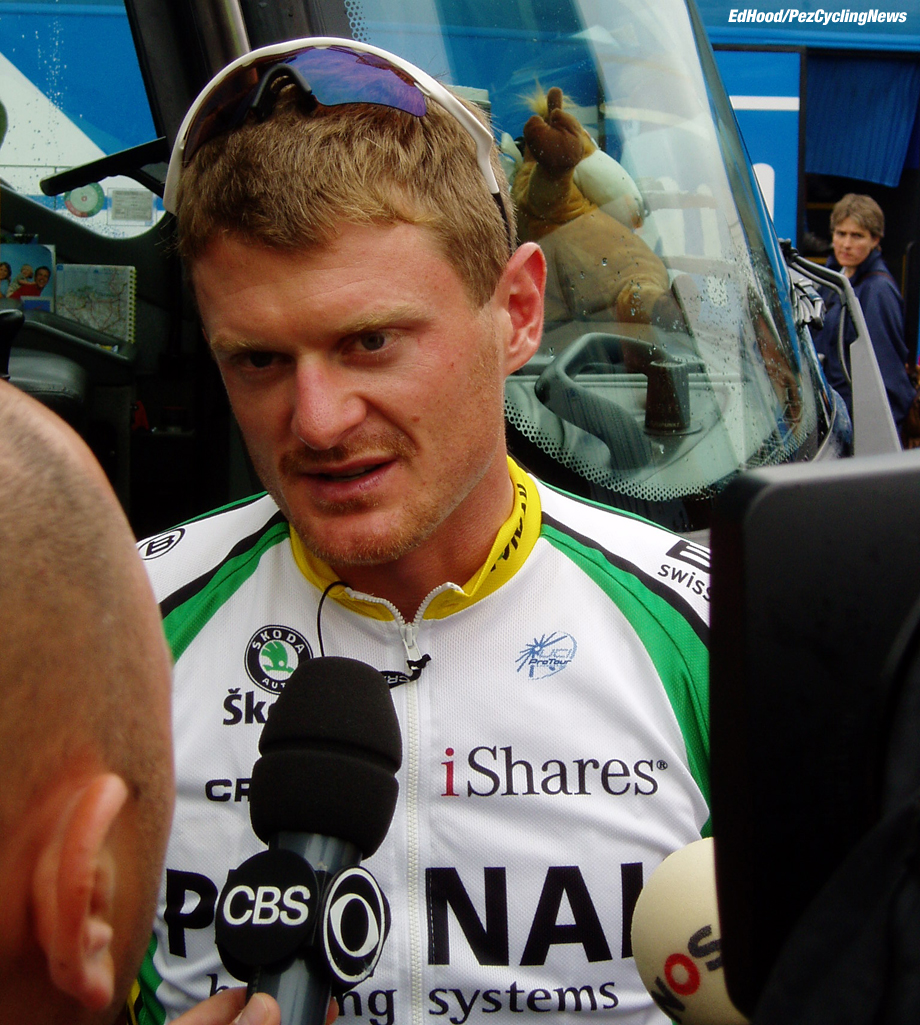 On the subject of wagers, the odds on Floyd Landis winning the 2006 Tour would have been long – but then of course he only actually had it won for a few days. Messy days – I don’t miss them. 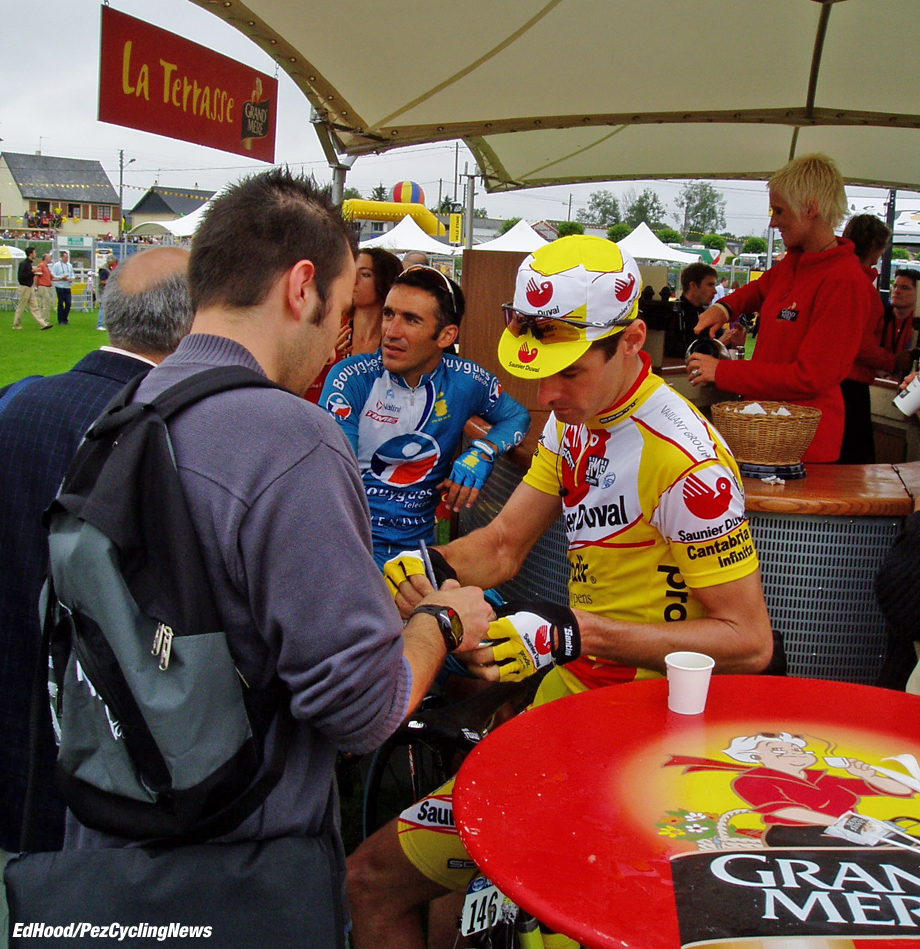 The buses weren’t as sophisticated back then and the riders would happily sit and relax in the Tour Village, have a coffee and read the paper as they waited on the call to the start. Here, Scotland’s David Millar scrawls an autograph between coffees. 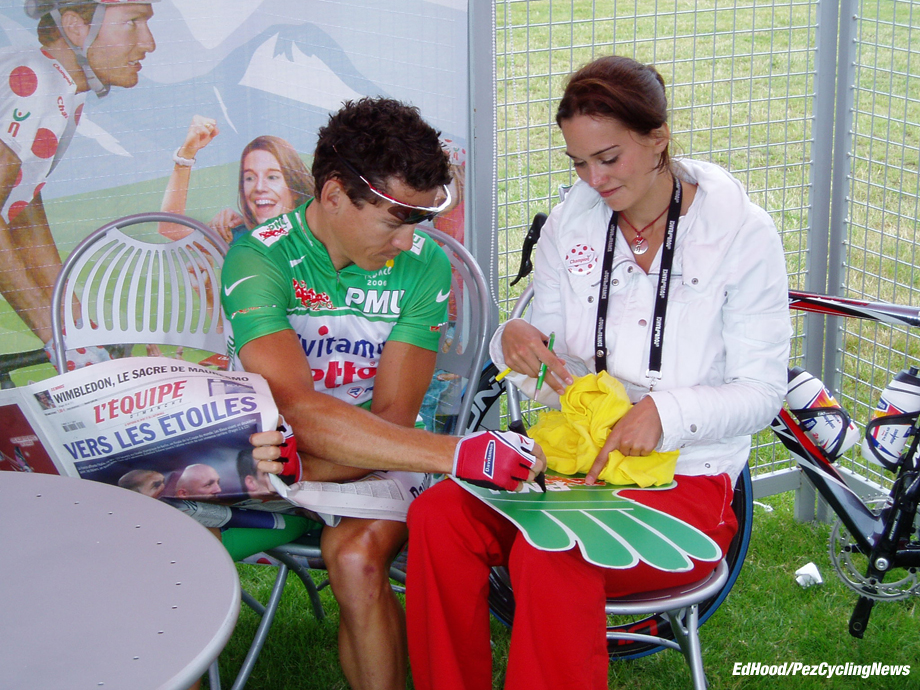 It was never a good idea to separate Robbie McEwen from his read of the paper and coffee, he could be ‘nippy’ albeit I never found him that way – but this pretty girl gets away with it, no problem. This would be the last of prolific winner McEwen’s three Tour green points jerseys, he’d pick up a dozen stage wins along the way not to mention another 12 in the Giro. 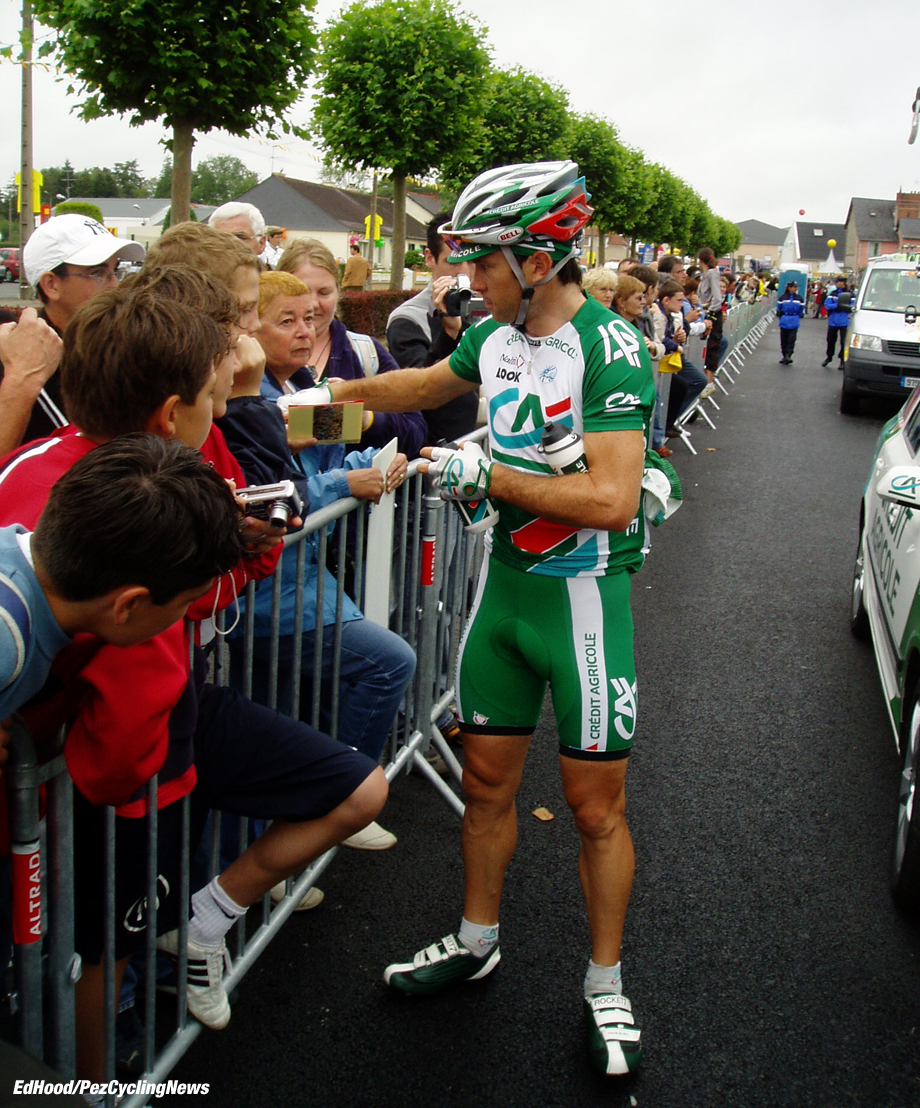 Former kiwi champion Julian Dean always wore that worried look, even when signing autographs – he was a highly regarded lead out man for Thor Hushovd and later for Tyler Farrar. He’s on staff now with Orica-GreenEDGE; best not try to blag him – he’s seen it all . . . 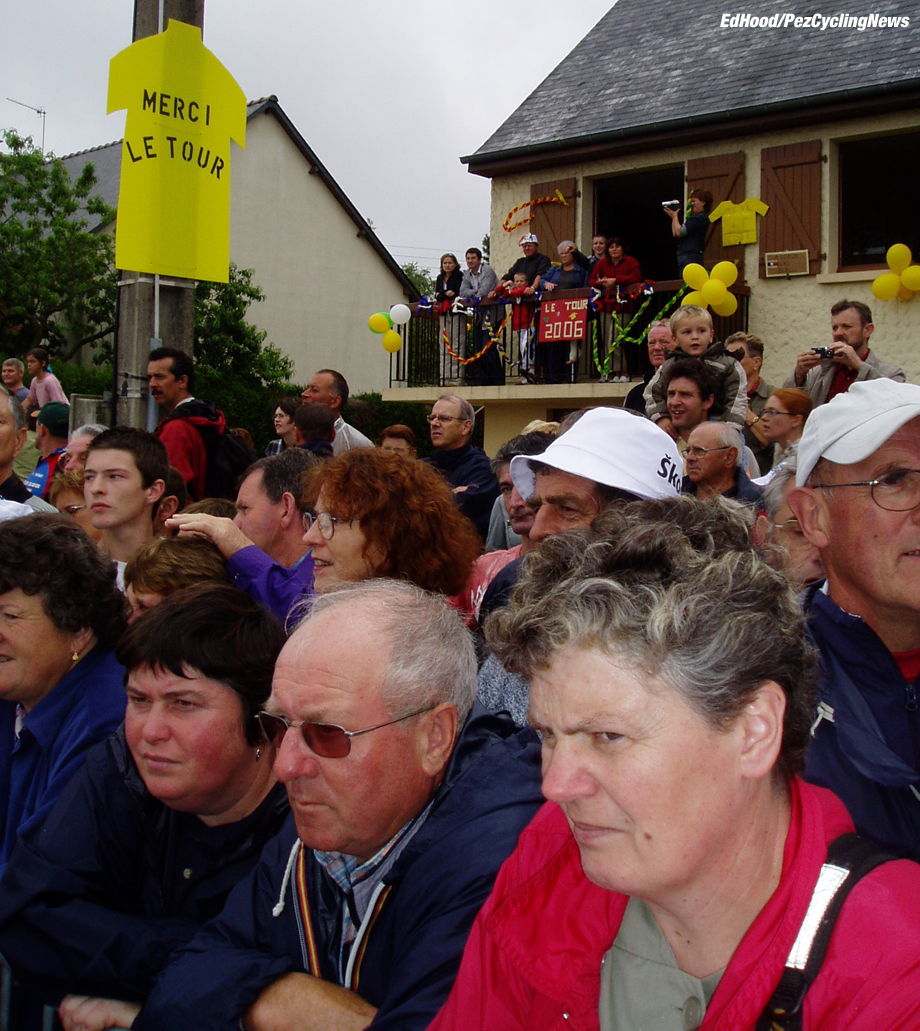 And so have the fans in Brittany; still France’s cycling heartland – there’s a prime line in every main street and at the top of every hill. Many will remember a young Hinault ripping every race he entered apart – a few will even remember home boy Louison. 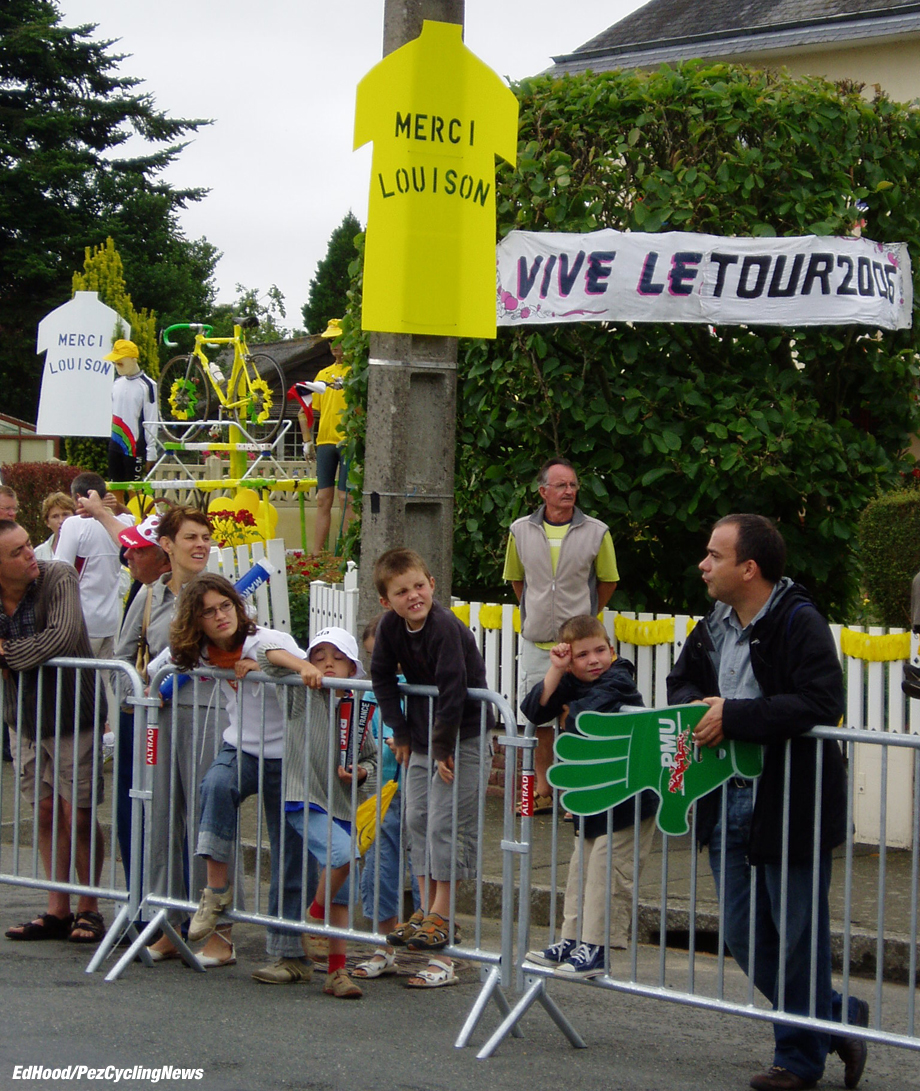 Bobet was born here and there’s a museum in his honor – the first man to win three consecutive Tours de France he was twice French and once world road race champion. He also won Milan-Sanremo, the Tour of Lombardy, Paris-Nice, the Tour of Flanders and Paris-Roubaix; such versatility would be unthinkable in our era – and all time giant of the sport. 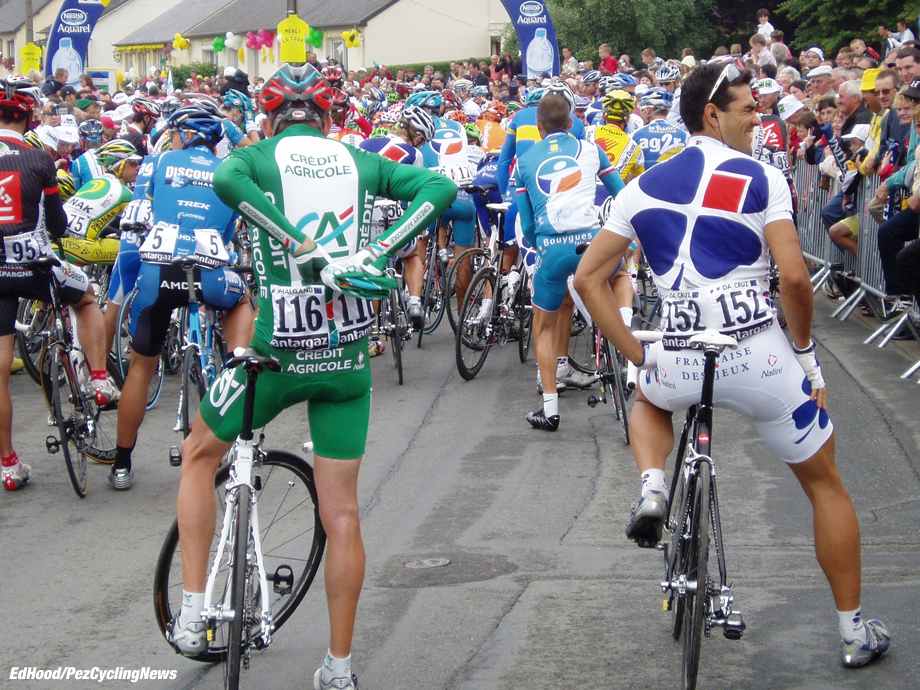 F des J’s Carlos Da Cruz didn’t win much but he always looked SO cool, always the last to put on his crash hat in deference to that ‘Tin Tin’ quiff – maybe if he’d spent more time training and less time in the barber’s chair? 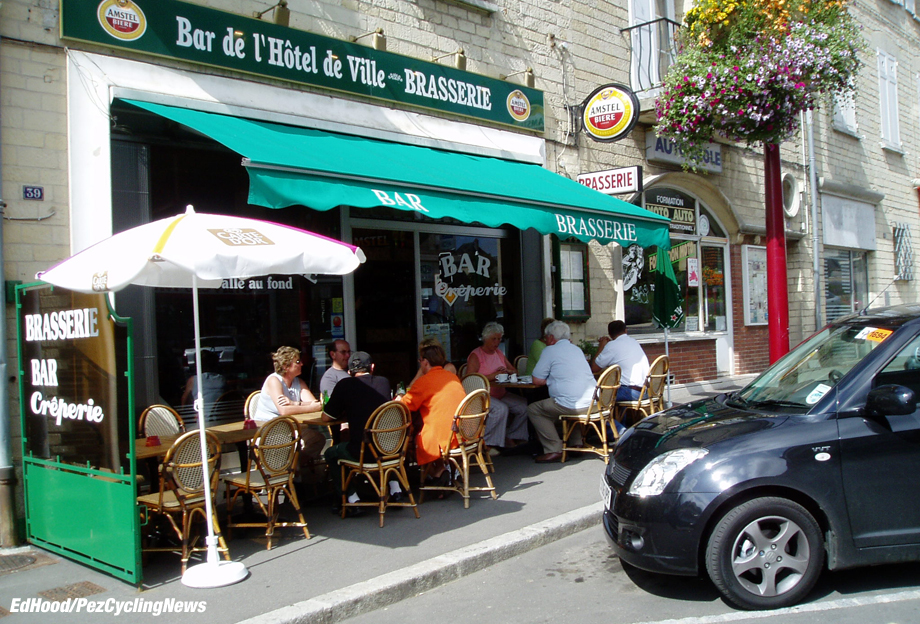 The race left without me that day – but I soon found a bar with a TV and Faema coffee machine – you have to! It’ll soon be time again; with Contador, Froome, Quintana – it should be some race. . .