Looking Back at the Career of Eurosport’s Brian Smith

Ex-Rider Interview: We recently interviewed GCN commentator, Dan Lloyd and that got us to thinking about another ex-rider who has swapped letting his legs do the talking for actual verbalising. We thought you might like to hear what Eurosport’s Brian Smith had to say to us some 16 years ago – time flies. . . 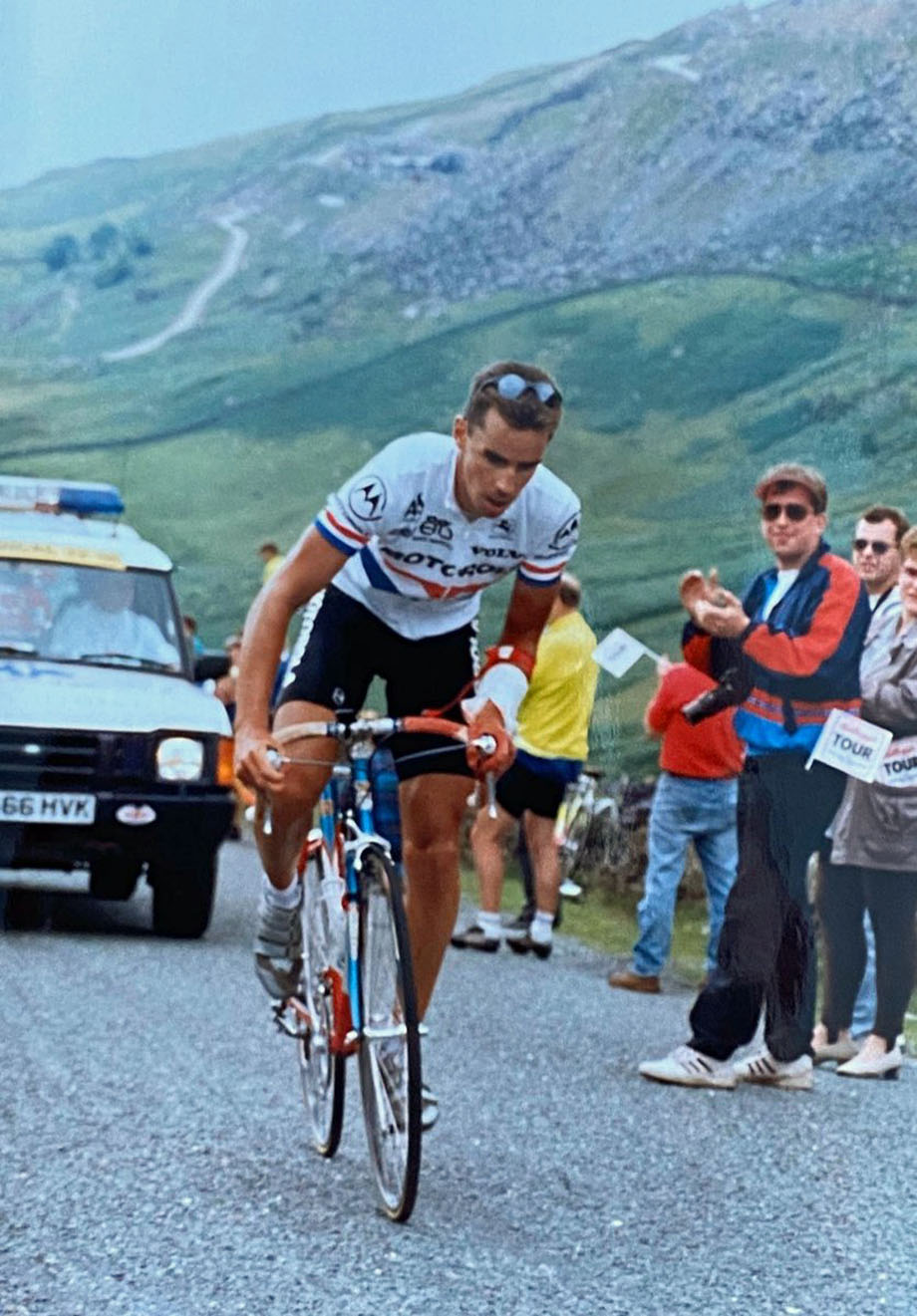 You’re the new kid on the block and have just survived a six hour training run with the big boys. As you approach the hotel only Sean Yates is ahead of you on the road. Instead of riding up to the hotel Yates turns left on to a back road. You catch him up: ‘What’s up Sean?’
The big chap replies; ‘I’m doing another hour-and-a-half.’ Before you think, you say; ‘can I come?’ Yates nods approval and an uncomfortable one and a half hours follow. Just before the hotel Yates pulls up at a cafe, and orders two cappuccinos and two large cakes. As you are about to attack the cake Yates points at it and tells you; ‘This is why we did the extra one-and-a-half hours!’ Brian Smith taps his forehead: ‘It’s all in here.’ 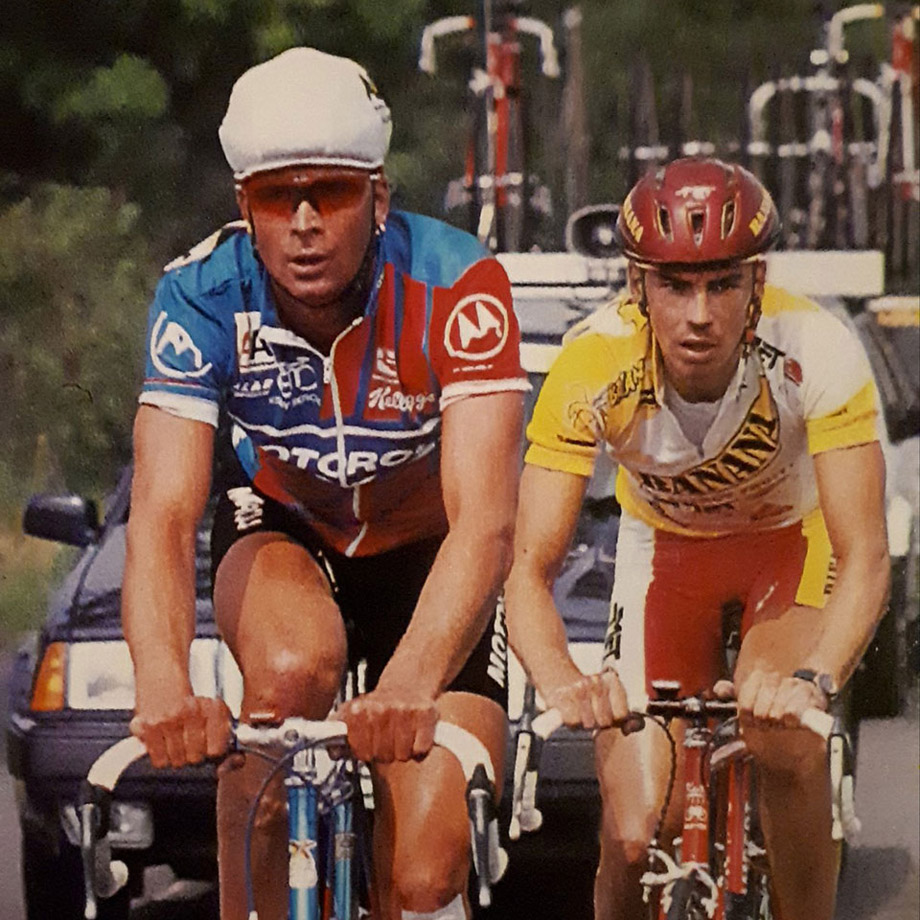 Sean Yates was a hard man of the peloton

I spent two hours with Brian Smith, we covered his Scottish career; international participations; two years with top French amateur club ACBB; his three successful years as a professional in the UK and his final two years as an American professional with Plymouth. Talk of one year however, 1994, falling between the UK and US sojourns brings the man to life, excitement shines out of his eyes in a way it does not when discussing any other part of his career.

1994 was the season he spent with Motorola. He was an integral part of the team, riding some of the finest riders of the era; Raul Alcala, Phil Anderson, Steve Bauer, Andy Hampsten, Sean Yates and a certain Lance Armstrong. During that 1994 season Smith won the British Pro Road Championship and the Grand Prix Midtbank in Denmark; he finished the Giro d’Italia and had moved up the pecking order within the Motorola team to the point where he was tended by the number one soigneur and mechanic in the team. Why only one season then? But let’s go back to the start. . . 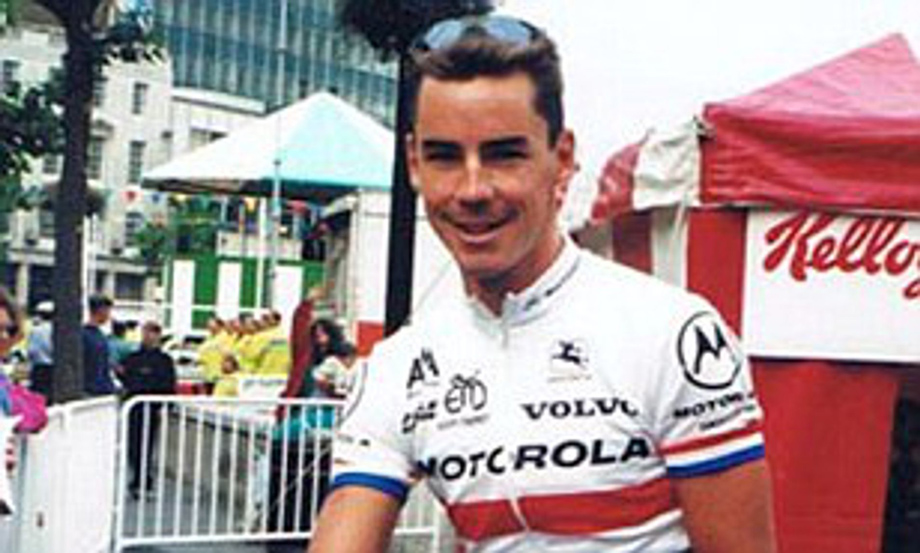 Smith was born into cycling, his father Donald was a good roadman and his brother Don was Scottish Schoolboy Champion. Young Brian won races from the start and his success continued through junior and senior levels to a successful international career. The logical progression was to the continent and he joined Peugeot feeder team, ACBB as, Robert Millar (an occasional visitor to the Smith household) had done before him. Despite numerous good placings such as third places in Paris-Troyes and le Prix des Flandres Francais, the wins required for a continental pro contract did not come.

Smith decided on a fresh approach and returned to Britain and a pro contract with Banana for 1991. This was during the glamorous but brief period when cycle racing was televised in the UK and when continental riders and managers visited the UK regularly. Malcolm Elliot had shown himself in the Nissan Tour of Ireland and a contract from Fagor was his reward. In his debut season Smith won the British Professional Road Race Championship. There were three successful seasons as a British pro, he won numerous races and was runner-up in the Championships in ’92 and ’93. The fire still burned within to perform on the biggest stage of all however. In 1994 his dream came true, thanks to a connection with the late Paul Sherwen, who was Motorola PR man at the time, a contract was signed for him to appear in the red and blue colours that season. 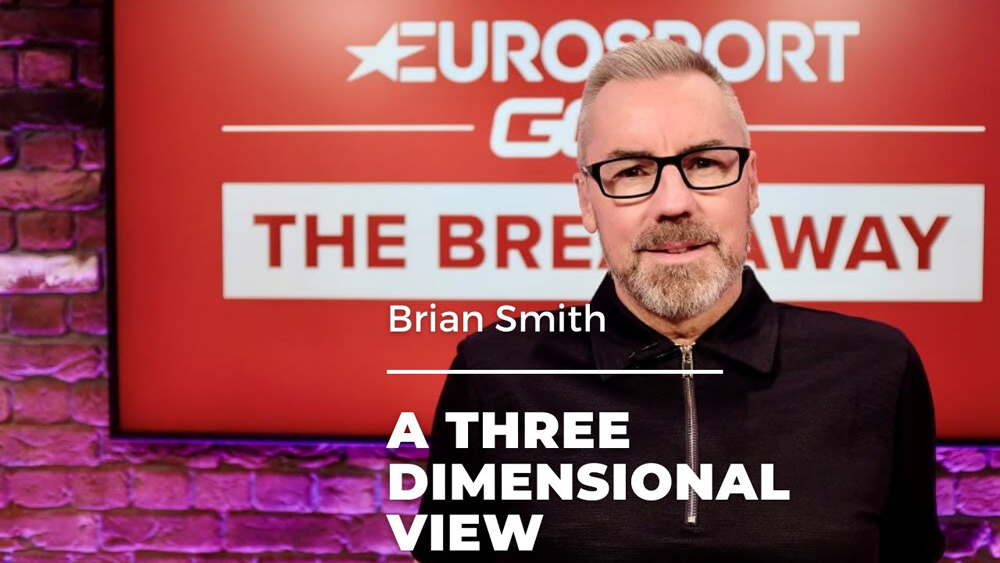 Smith wintered well and gave good account at the early season training camps. The team contained some of the finest riders of the generation but Smith was not over-awed and he was a regular team choice through the spring. Once his system acclimatized to the sheer volume of racing, the form began to come and in May he delivered the team’s first European win of the year at the GP Midtbank in Denmark. Three facts should dispel any suggestion that this was a ‘soft’ win, the race distance was 205 kilometres including 18 of unmade gravel road; the average speed was 43 kph and in third place was a man highly motivated to win his home classic, Bo Hamburger, a Worlds podium finisher and Classic winner. 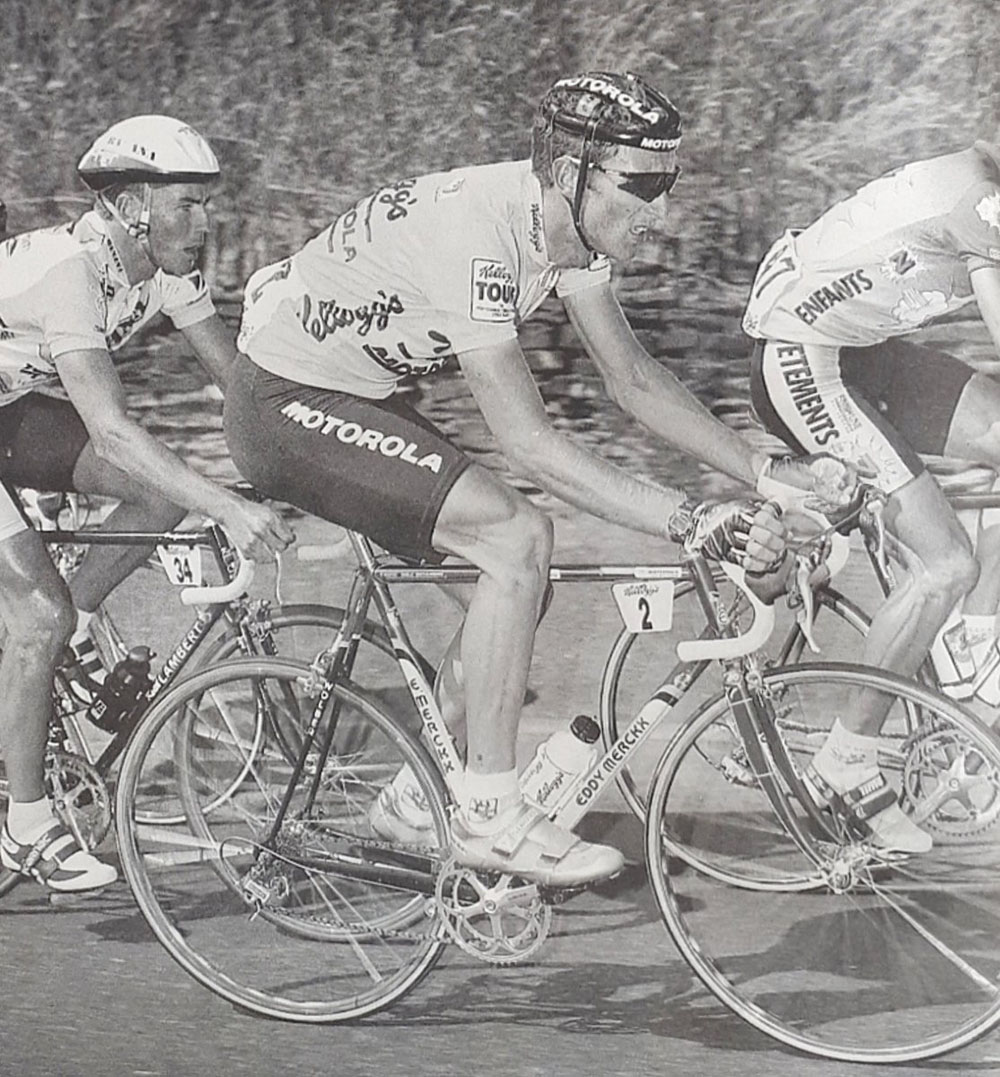 On the back of this Smith got his shot at the second biggest race in the world, The Giro d’Italia. His job was to help Andy Hampsten, a former winner of the race and still viewed as a favourite. This was the, ‘Gee-Whizz’ Giro, dominated by the Gewiss squad with Russian Evgeni Berzin running out winner guided by his mentor, the hugely experienced Moreno Argentin. It was also the Giro where Marco Pantani burst on to the scene with two mountain stage wins. 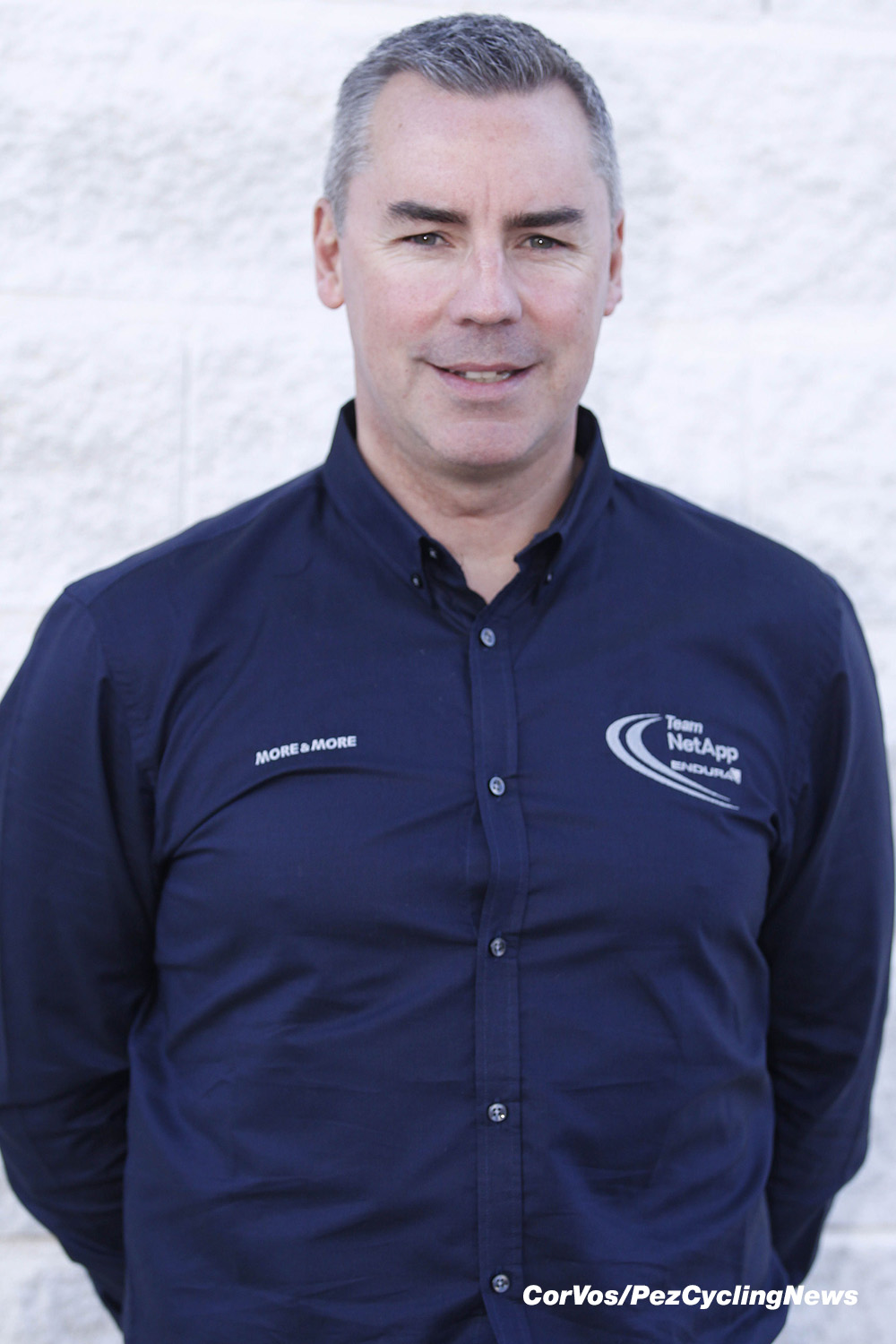 As the new names stock rose, so Hampstens’ fell, 10th overall was not what the Motorola management expected. In this result were sown the seeds of Smith’s parting of the ways from the team. The Giro was a brutal experience for Smith but he gained respect from Hampsten and the squad for his dogged performance, doing a job for the American throughout. He had started the race with the third string mechanic tending his bike and the junior soigneur rubbing his legs, by the end of the race he was the charge of Hampsten’s mechanic and soigneur. Once he had recovered from the Giro the form came quickly and he was unbeatable in the British Championships on the Isle of Man. At the year end the results on paper looked very reasonable for a first continental season, two good wins; a finish and job well done in a major tour plus a reputation as a good team man. 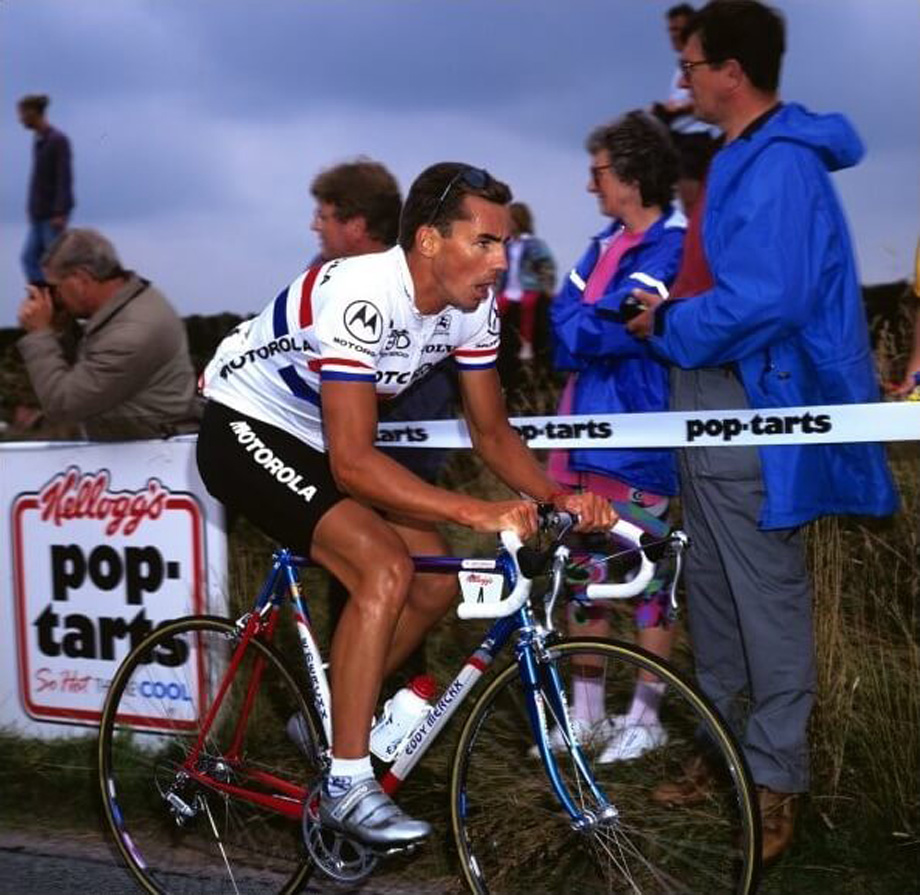 The team boss put it like this, ‘We can’t very well let Andy go and keep you, when you work for him, can we?’ In the world of professional cycling there is little room for sentiment, especially when the sponsors are result hungry, hard-nosed American business men. The poor Giro had sealed Hampsten and Smith’s fate. A fallacy among the cycling public is that all professionals are well paid and the strict UCI rules make it impossible for a rider to be ripped-off. The reality is somewhat harsher, many pros would not be in the peloton if it were not for the financial help of parents, friends or local business men. The teams Smith spoke to wanted him to bring some money to the party, a ‘dowry’ as it’s known, he could not and his continental career was over. 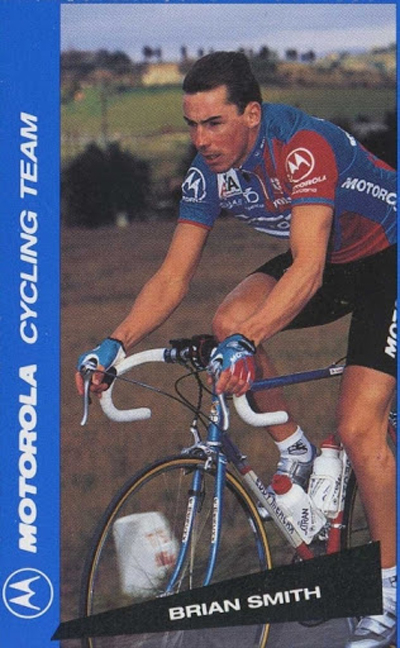 Two years as a pro in the USA followed but whilst it was his name on the start sheets the fire and desire were still on the other side of the Atlantic. Despite the three Commonwealth Games, the Olympics and the championship wins I think he would have traded them all for a two or three more seasons in the continental pro bunches. 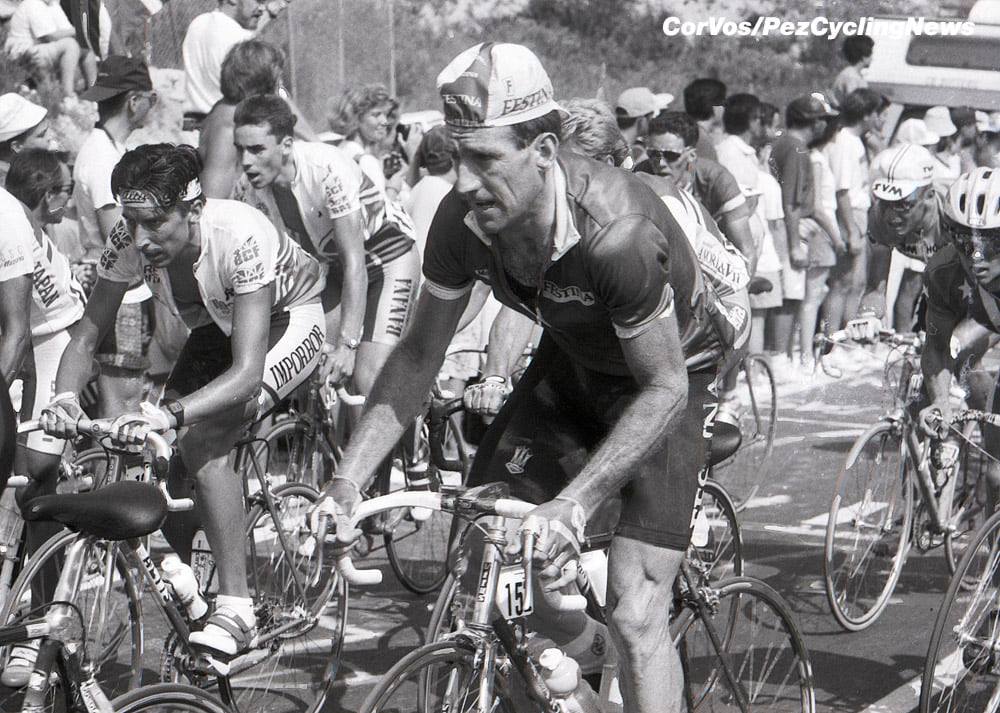 It’s a wet day in the perennially tough Tour of Catalonia, Lance is having trouble with his shoe plate, you slide back to the car and collect the correct screw driver, take it up through the bunch to Lance, push him as he sorts things out. A few kilometres later you puncture, a brutal chase gets you back to the bunch. At the finish as you wipe the grime away, Lance appears, there must have been a split just as you got back and Lance missed it. The Texan freewheels over to you; gives you the high five and laughs; ‘You’re a tough son of a bitch!’ It was only one season, but it was one to be proud of. 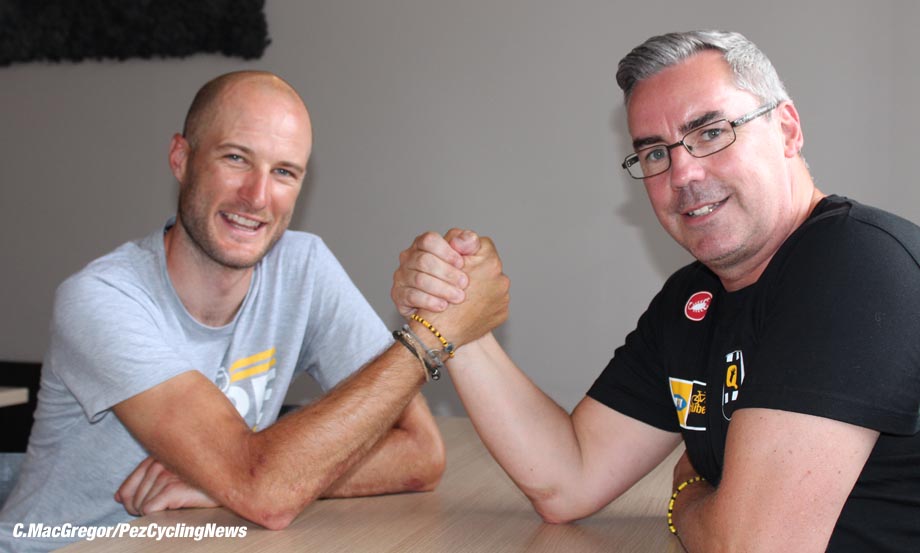