The Mailbag is fuller than Uncle Herb after Christmas dinner – so it’s time to expunge! Today we say goodbye to Tugboat, hear how Le Tour saved a life, consider Sheryl Crow’s Trek, OLN’s Tour coverage, and as always – answer your Distracting concerns. Today’s a cracker… read on…! 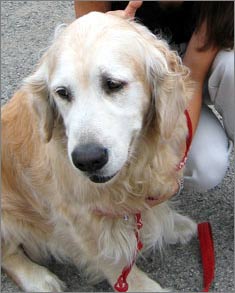 Tyler’s faithfull friend Tugboat succumbed to cancer
this week. This photo was taken at the 2003 Tour.

As you read through the guestbook today on Tyler Hamilton’s website, the outpouring of condolences is incredible. It is then that you really get a feel for what Tyler means to his fans. As people go on and on about what will happen to cycling in America after Lance Armstrong retires, there is a little-known hero that has touched the lives of many, yet there are many more that do not even know his name.

Saying goodbye to his beloved golden retriever, Tugboat, during the most demanding race of the year, Hamilton is seen for what he really is. A deeply caring individual, who happens to be very gifted on a bike. The way he has cared for Tugboat over the past nine years is a testament to his character, as is the support he has received from around the globe. Today we pay tribute to Tyler Hamilton, for being a life hero, not just a sports hero.

No, he hasn’t battled cancer, but he rode twenty days with a broken collarbone to finish fourth in last year’s Tour de France. He is a humble, caring man, quick to ask about you, letting the limelight focus all around him. Hamilton isn’t just an inspiration for what he has done on the bike, but the way he has lived his life. Tyler inspires us to be better. Not just on the bike, but everyday, with every living creature around us.

Today, as thousands of people stand beside Tyler and his wife, Haven, as they say goodbye to their beloved Tugboat, we are here to say, you are not alone. Tugboat is with you. We are all with you. Your faithful friends are all here, to help carry you through what will most likely be the most challenging two weeks of your life. Should your legs fail you on Alpe D’Huez, there will be four more pushing you along. Goodbye Tugboat! You will be missed. Carry Tyler to Paris on wings.
– Bobbi Schroder

TDF SAVED THIS GUY’S LIFE
It was to be the trip of my life – my wife and I off to the 2004 TDF to watch with a million others, and a chance to ride my own bike on some of the tour’s famous routes, including Alp d’Huez. Despite being a devout recreational rider for many years (I am 45 years old), my personal training began over the 2003 Christmas holiday. I started reading all of the training books (Carmichael, Lances’ performance program, the Training bible, etc.) and never road more than 10 feet without my Polar heart monitor.

For months, I trained and rode hard, and as often as my schedule would allow, to prepare myself for my own personal TDF. The training paid off as my condition got to be the best ever…until just a few weeks ago. My interval training on hills starting producing sharp chest pains. Only weeks earlier, I could peak my HR in the low 170’s during some climbing, but now I could not break a HR of 130 without pain. I have been riding for years without any issue, and my personal specs are great: don’t smoke, train a lot, eat right, don’t drink, have fine blood pressure, fine cholesterol, etc.

A week before climbing on a plane to France, I went from doctor’s office, to learning I had serious heart blockages (some 90%) to having open heart triple bypass surgery. My condition was found by my flunking my own stress test. I am now better than ever and recovering, and writing this while watching the OLN gang provide the usual awesome coverage of the Tour.

The point of this letter is that if it was not for the Tour de France, my condition would never have been discovered in time. One opinion is that somewhere some time down the road, I probably would have died of a massive heart attack. So instead of sitting in my own saddle in the bike trip of a life time, I now have my life, am watching the tour, while sitting in my comfy living room chair and I could not be happier. So I guess this is a personal thank you to my personal sports apex: the TDF! And hey, there is always next year! J
– Richard Lewis

TEST REQUEST
I was looking around on the web and stumbled across Sheryl Crow’s web site. There was a blurb about the yellow bracelets that everyone was wearing but on the side of the text there was a picture of Sheryl on what looked like a Madone but with an FSA compact crank on the front and a large number of teeth in the back. Then yesterday on cyclingnews.com (I read it for the results I swear) there’s about 5 lines with Sheryl and how she made up l’Alpe d’Huez in 90 minutes. I think Pez should probably do a Pez-test on her bike so that even if we can’t match Lance maybe we can match Lance’s girlfriend.
– Dan Kerrigan

Dan – we’re on this one like 21 A-Style logos on Alpe d’Huez (stay tuned for the full story). I’ve already had my people contact her people – we’re just waiting for an answer. Oh – and Sheryl – if you read this – please drop us a line and, uh, we’ll send you some PEZ Socks!

OLN TOUR COVERAGE
I love this site. Love the name. Love the Daily Distractions. Love the articles. I was reading about the OLN coverage of the Tour via your interview with OLN’s John Carter. I get a kick out of Bob Roll on purpose saying “Tur DAY Frants”. He knows how to say it as the French would; he just loves twitting people. And Kirsten Gum is not a bimbo about cycling. Part of what she does is ask the questions many viewers would ask but are afraid to, for fear of appearing uninformed. Besides that, it’s very easy to gaze upon her hors category cols, no?
– Scott, Phoenix

We’re also glad to see Bob Roll become aware of his flappy hands, and even Kirsten seems to be blossoming in her new role on the “roadside” (I’ll have to ask our Dave Aldersebaes if he sold out his Roadside Dave franchise.) Now, if OLN would just do something about those “Cutters”…

DISTRACTING CONCERNS
Uh …I don’t want to sound crass but after polling my friends, we over- whelmingly prefer full body shots not the facial close-ups!
Love your site.
– David, N. Carolina

Here’s the deal – we know podium girls are pretty, and we get to see them on TV and stuff. It seems to me the height of the “distractions” art is to find hot women at the Tour who are not podium girls. Your best “distractions” are real women at the finish or on the road or on a bike – there were some at the Tour of Georgia that were simply stunning.

Okay, throw in the occasional podium girl (because, to repeat myself, they are pretty), but simply banging pictures of podium girls for three weeks is way too easy to be a good “distraction.”
– Paul Hurdlow

Dare I say it – have we created a monster? Readers actually complaining about pics of babes on PEZ! Okay okay – we hear ya, and have already taken steps to remedy the lack of full-bod shots and TDF podium girls. If you only knew the hoops I have to jump through to get the kind of quality race babes we’ve made famous…! And don’t forget – if you see a pretty girl at a race – ask her to smile for your camera and send us the pic – you could earn a pair of PEZ socks!

Got Something To Say?
PEZ welcomes all forms of opinion, even hot air. Make it PEZ-worthy and we might just publish you in glorious pixelated black & white! (Letters may be edited for length, spelling, and clarity.)