Now that we’re into the holiday season, what better way to keep track of the New Year than with PEZ Photographer Darrell Parks’ 2012 calendar? The new calendar features Darrell’s images from he Amgen Tour of California, the USA Pro Cycling Challenge, and one day classics like the Tour of the Battenkill and the Philadelphia International Cycling Championships as well. We asked Darrell to take us through the stories behind a few of his selections…

If you can’t wait to read the story, you can order the calendar here: Darrellparks.com/Calendar.html

I was fortunate enough to shoot the inaugural edition of the USA Pro Cycling Challenge in Colorado this August, and was pleasantly surprised by the support this race was able to gather in its first year. It really seemed more like an established race as fans were thick in the towns and the KOMs were nothing short of insanity. I chose the following shot for the cover since this was my favorite shot from the Colorado race and my favorite race to shoot this year. The peloton is riding along the Gunnison River as Highway 135 gradually climbs towards Crested Butte. This is just one of the numerous scenics I was able to capture on Stage one, as I was fortunate to be on a photo moto that day. 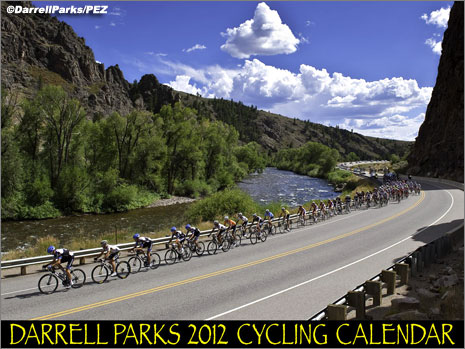 Here’s another shot from stage one of the USA Pro Cycling Challenge. Here the Peloton hits a rise in the road on their way out of Salida, Colorado. I had scurried up a steep, soft embankment along the side of the road and was literally slipping down the hill as I was shooting this image. The day’s long breakaway would form on this short but steep climb. 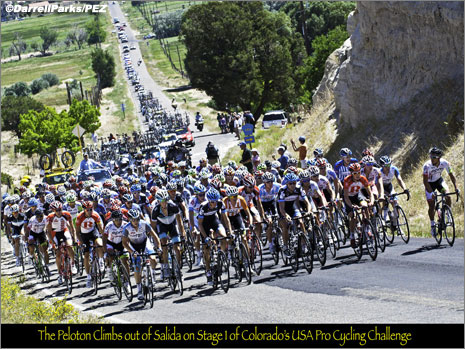 We were constantly threatened with rain on stage one as well. The storm seemed to be following us everywhere making for some very scenic clouded skies. Near the end of the stage the storm was right behind us as I captured this image of the dramatic sky and the helicopter giving chase to the peloton which was still bathed in sunlight. 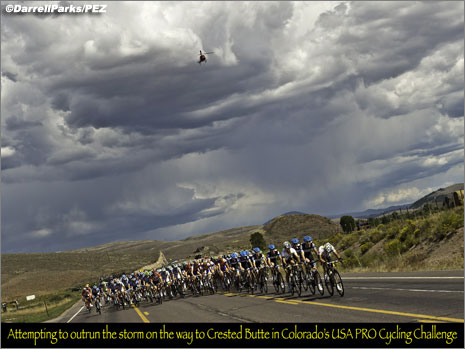 The fans on the last stage from Golden to Denver were the largest group I’ve seen at any US Cycling Event. This shot is from the finishing circuit in Denver where the streets were lined several deep all along the course. 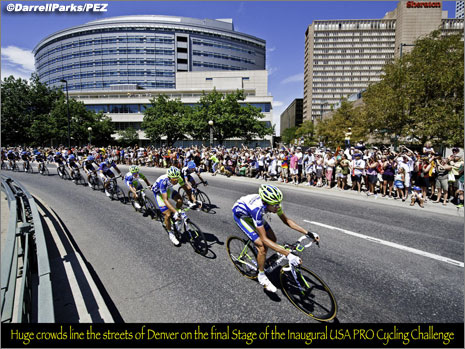 Another of my Favorite races is the AMGEN Tour of California. Having lived in California for 8 years, I really enjoy returning there for the race. This shot was from Stage 5 that started in Seaside and ended in Paso Robles. The route was originally designed to take the riders down the Pacific Coast Highway but landslides forced a reroute inland. Photo Motos are fairly expensive for the California race so I typically get around the course by car. I didn’t have much luck shooting earlier in the day’s stage as I had made a decision to take the same route as the race and ended up stuck behind the peloton after my first shot.

Some of the other race photographers had picked an alternate route which turned out to be the better choice as they got out in front of the race for an additional shot (Damn you Ken and Steve…). Some days go your way, and some days don’t. We all met up later in the stage as the race went back and forth along Highway 101 and ended up at this spot. It was interesting to see how each photographer had captured the same scene in their own unique styles. This shot made up for my earlier misfortunes on the day. 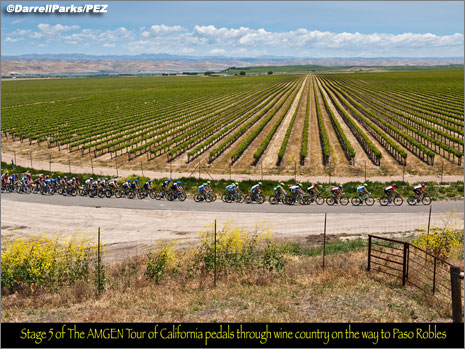 Stage 3 of the AMGEN Tour of California traveled from Auburn to Modesto. This stage turned out to be a bit on the wet side. Even though it doesn’t rain much in California, precipitation always finds its way into a stage or two during the race. I made it to the small town of Ione ahead of the race and began assessing my shooting options. I saw a covered porch above the local pizzeria that would keep me dry and allow for a prefect vantage point to shoot the peloton coming into town. I went inside, bought a slice of pizza and asked the proprietor if I could get access to his upstairs porch, getting the shot and a bonus…lunch! 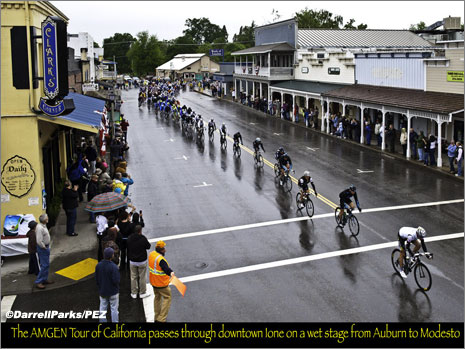 And speaking of rain at the AMGEN Tour of California, this year’s finish circuit in San Jose was anything but dry. Oh yeah, and there were no covered porches to be found anywhere. 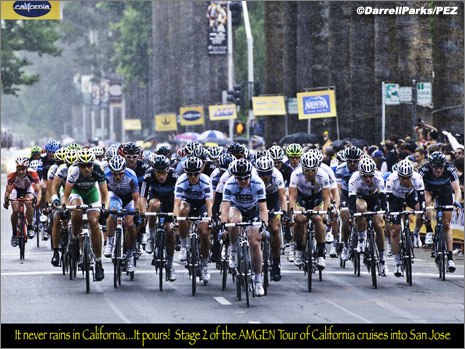 The Tour of the Battenkill in New York is turning into a true classic race. Its relatively long distance, combined with many sections of dirt roads, makes for a hard day of racing. I did a Photog’s view story on the race earlier this year highlighting why I love this race. The Shot of the riders emerging from the covered bridge has been done before, but I’m very partial to it so it made the cut this year. 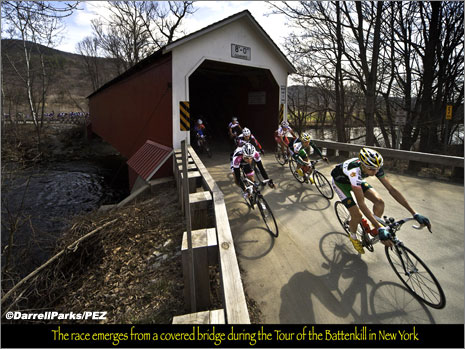 When people talk about the Philadelphia International Cycling Championship one thing is always mentioned – the party on the Manayunk wall! Well it’s definitely no party for the racers, as its steep pitches put a sting in the legs after hammering up it lap after lap. I always head to the lower part of the hill early in the race. The main reason is to capture images like this, with a full peloton on the climb, before attrition of this long race thins out the herd. 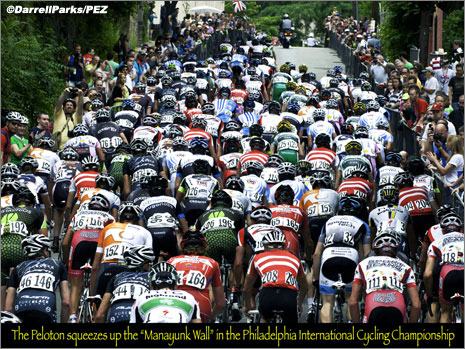 My last calendar preview image is not from a race but from an organized ride. Not just any organized ride though as 7,500 casual, recreational, and professional cyclists participated in this year’s “Levi Leipheimer’s King Ridge Gran Fondo”. I’ve been invited to shoot this ride since its inception and it continues to get bigger and better each year. This shot shows Levi and a few of his friends descending on the twisty Pacific Coast Highway as the storm clouds begin to dissipate. 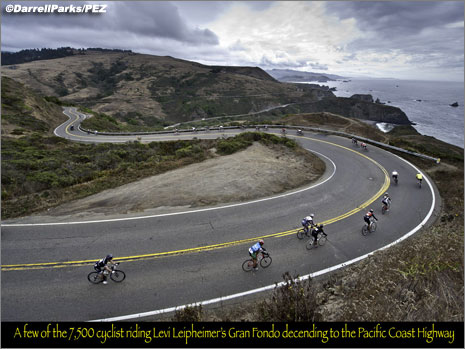 This is a preview of just 10 of the 16 images in this year’s Calendar. To see all the images and to order your “Darrell Parks 2012 Cycling Calendar” please visit Darrellparks.com/Calendar.html

11” by 17” of pure cycling photography goodness
16 full color 8” by 11” cycling images
Calendar days are annotated with UCI and NRC race dates as well, so you can keep up with what’s going on in 2012.
The calendar comes in at just $14.95 plus Shipping & Handling charges.
Fast USPS Priority mail shipping
Buy one for the cycling fan on your Holiday list…and get one for yourself too!

For more information on ordering and how to get your own, head on over to Darrell’s website, www.DARRELLPARKS.com.

PEZ In The Trenches: The Gent Six