Pantani Remembered: The Beginning of the End

For many of us February 14th marks Valentine’s Day – the day to remember and be with someone special. For cycling fans; this year also marks the 15th anniversary of Marco Pantani’s death – a spectacular and controversial rider still loved by thousands of fans today. Ale Federico was one of these fans, and remembers that day his hero started to fall… 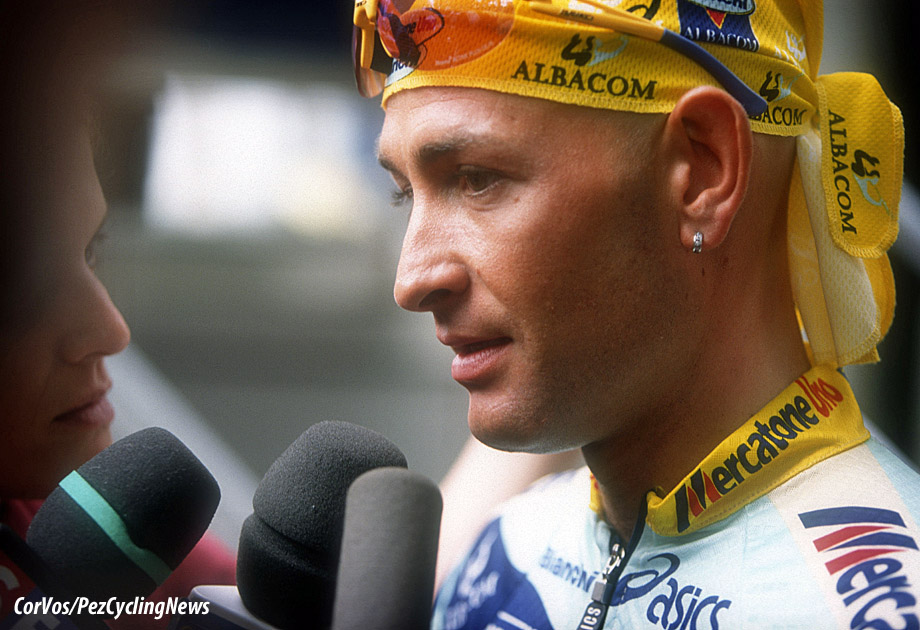 • Madonna di Campiglio, 5 Giugno 1999.
I left Madonna di Campiglio in the late afternoon of the 4th June 1999, Friday. The stage was finished just few minutes before and the people were still enjoying the Pantani show on the last climb. It was Friday and the sun was still high in the sky; a gorgeous spring day. I remember that in the morning the weather conditions were really bad; rainy and cold for all the morning, then it turned warm and sunny in a couple of hours. 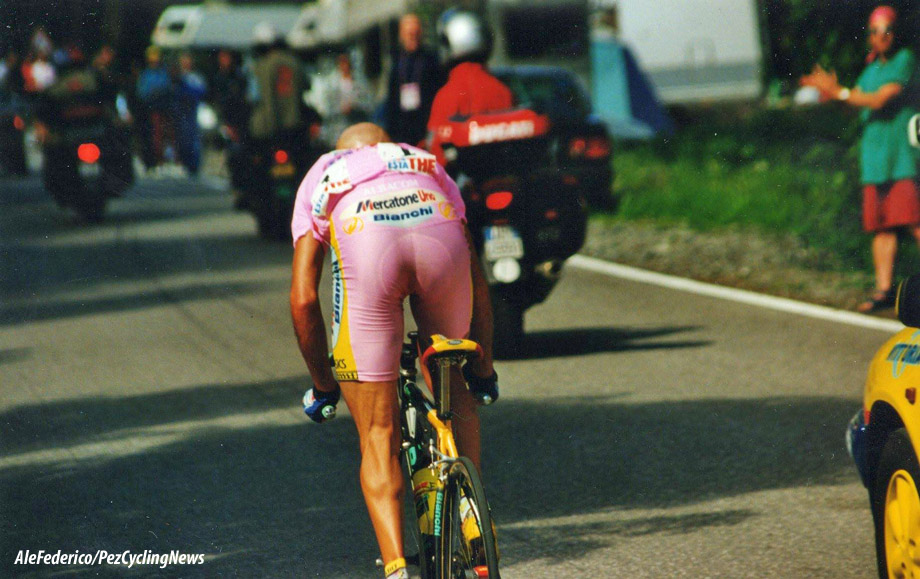 Pantani’s adversaries knew very well this view. Pantani was a step above during Giro 1999

That year I was riding my motorcycle all around northern Italy chasing the Giro d’Italia just for fun. Just me, my moto (a fantastic red Kawasaki D 50), my tent and my camera. Looking back to those good days I can say that it was my great moment; I had all the free time for me and, believe me, it was a lot of time! Do not think anything special. No different girls at each stage, no nightlife during that tour; just cycling. Did I miss a chance? 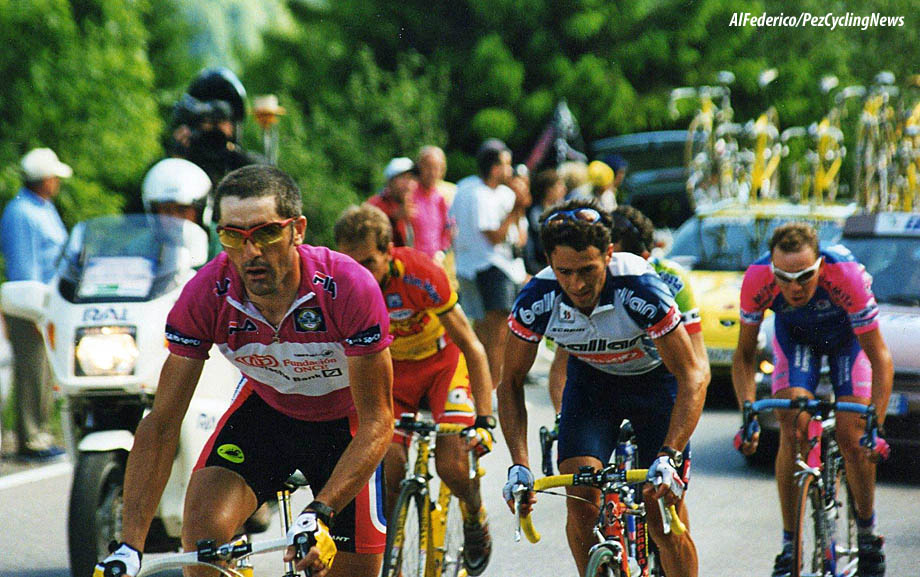 The adversaries: not exactly “amateurs” but Jalabert, Simoni, Gotti, Heras (hidden) and Codol.

That was the time of the great attacks of il Pirata; any mountain stage was a reason enough for a trip because it was almost sure to see a new Marco Pantani show.

But that day in Madonna di Campiglio I remember that everybody was really a surprised about his victory. That one was not considered “his” stage: he was in Rosa with more than 3 minutes on Savoldelli, he was coming from a great win in Alpe di Pampeago, the final climb was not so hard and the day after there was the Mortirolo stage waiting for him. At least, it was the good news! 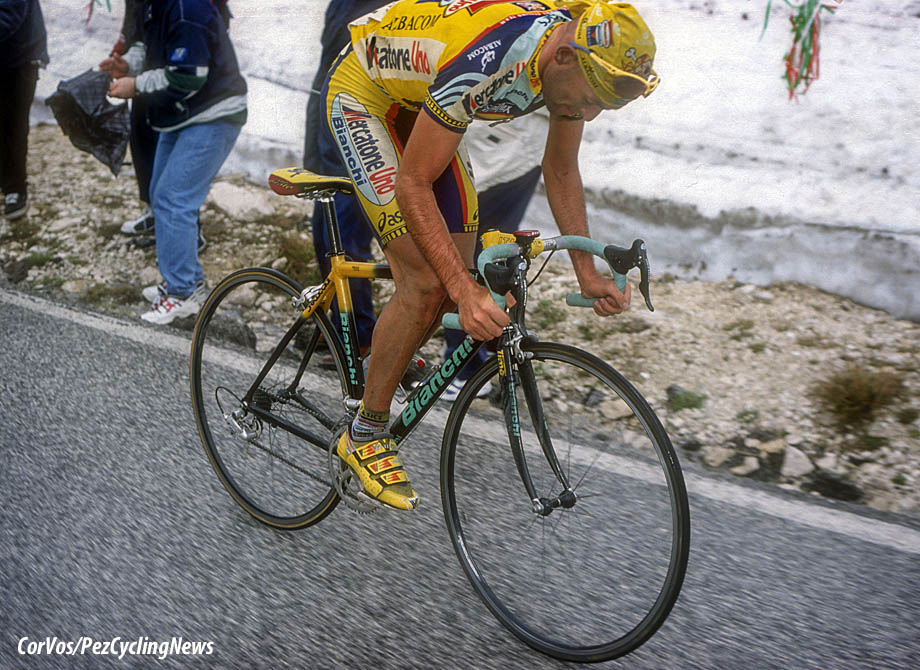 Pantani rides through the snow 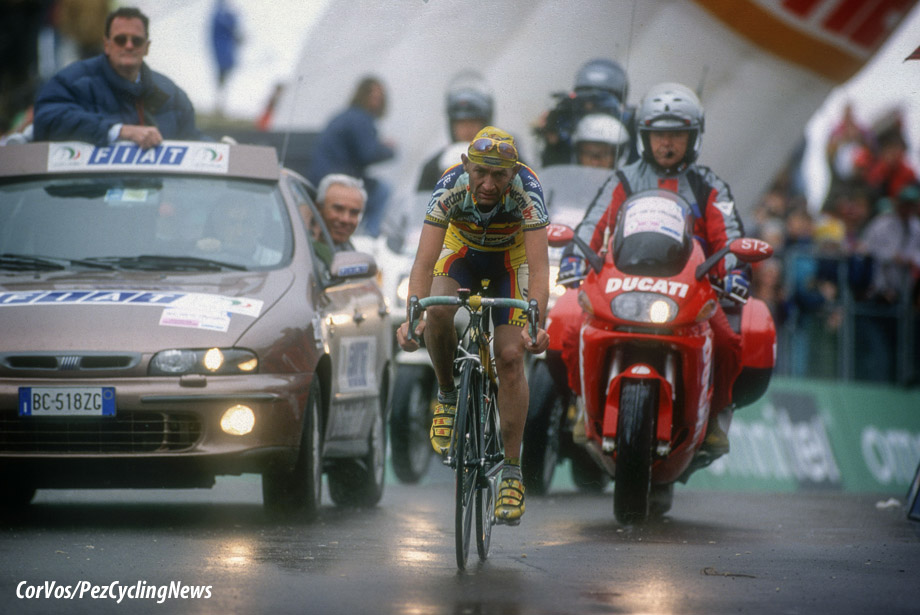 But everybody was also discussing how Pantani didn’t exult on the line that day. No arms to the sky, not a scream; he just passed through as riders in the middle of the bunch do. Also most of the comments of the after-race covered by the National TV were focusing this fact. Why Pantani didn’t exult? 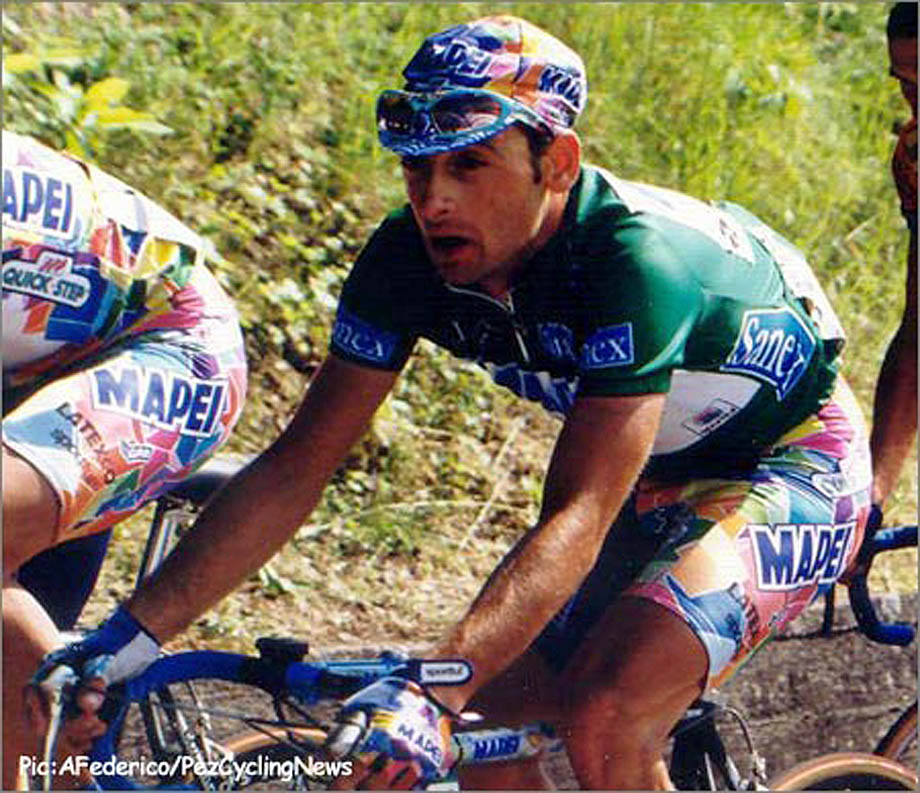 Bettini wearing the green jersey “on behalf” of Pantani.

The tifosi on the road were discussing animatedly after the race in front of their portable TV; they were investigating through the rumors coming from the bunch. These rumors wanted Pantani against the Mapei Team for a polemic raised around the doping controls imposed by the CONI to the Italian riders; a young Bettini with the green jersey was leading the morning break to Madonna di Campiglio, without any chance for the overall standing, but very important for the MAPEI team. Then Pantani’s team chased the break and Pantani attacked on the final climb and won.

“It’s been just a revenge that’s why he didn’t exult on the line!” – this were the words of the Tifosi on the road. 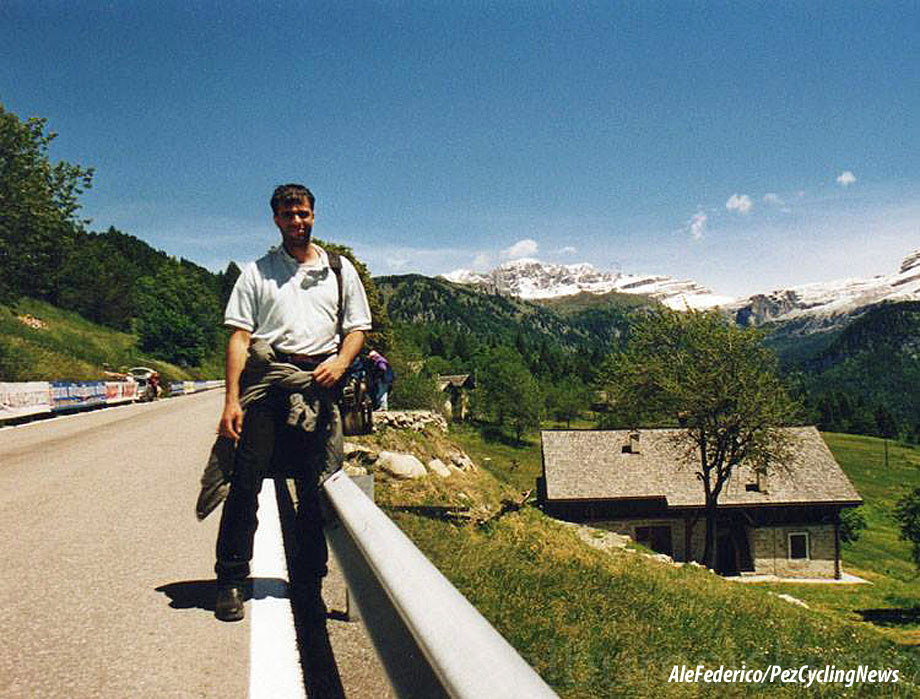 Ale in Madonna di Campiglio waiting for the race.

After each stage of the Giro is always a big confusion. There was a lot of traffic but with the moto it was easier for me to escape. My plan was to reach Aprica for the following day stage: the queen of the entire Giro. Tonale, Gavia, Mortirolo, Santa Cristina and Aprica. Everybody was looking forward to the Mortirolo, the climb where Pantani in the 1994 showed to the world that he was the only one able to attack Indurain. 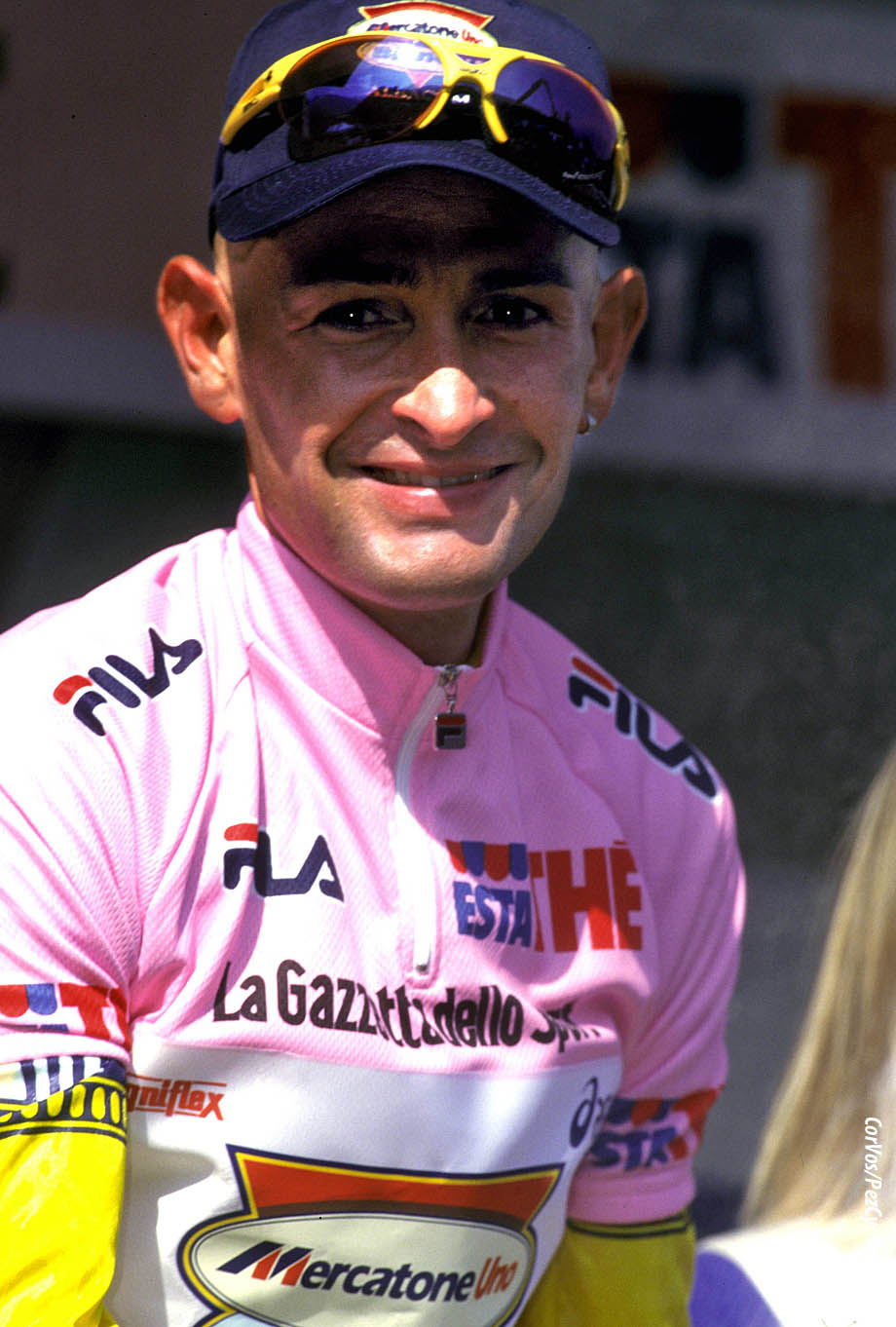 So, from Madonna di Campiglio I had to ride through the Tonale and descend to the base of the Aprica. On the top of the Tonale was very cold; I arrived there in the early evening and there were a few people, some of them cyclists, just enough time for a pic and I proceeded to the base of the Aprica climb, in Edolo, where I ate a pizza. When I finally arrived at the Aprica there was no more space to stay! So many people were there since the days before; it was dark and I was also tired from the long day in Campiglio and the trip therefore I decided to move to the last climb of the stage few kilometres far away: the Valico di Santa Cristina. 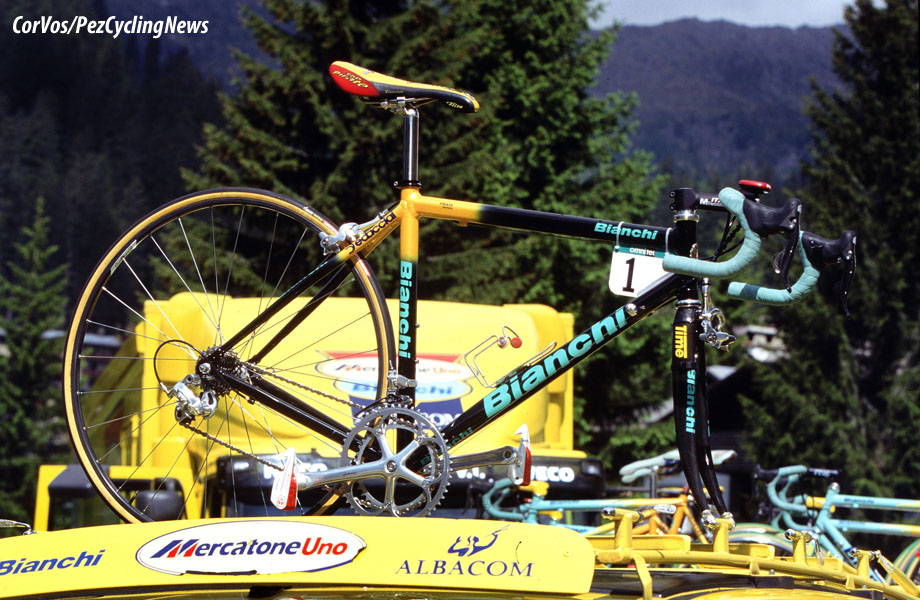 I found a quite lonely place there and with the help of the lamps of my motorbike I installed my tent. It was so dark that I couldn’t see my hands! Finally I started to sleep when a group of tifosi arrived just near my tent with their car. When you’re inside a tend you loose the distances and I was feeling that car engine just few centimetres from my head. They were mounting their tent and they were using the car lights trying to see something. I yelled at them to shut down the engine and they did it. I slept a few moments later. 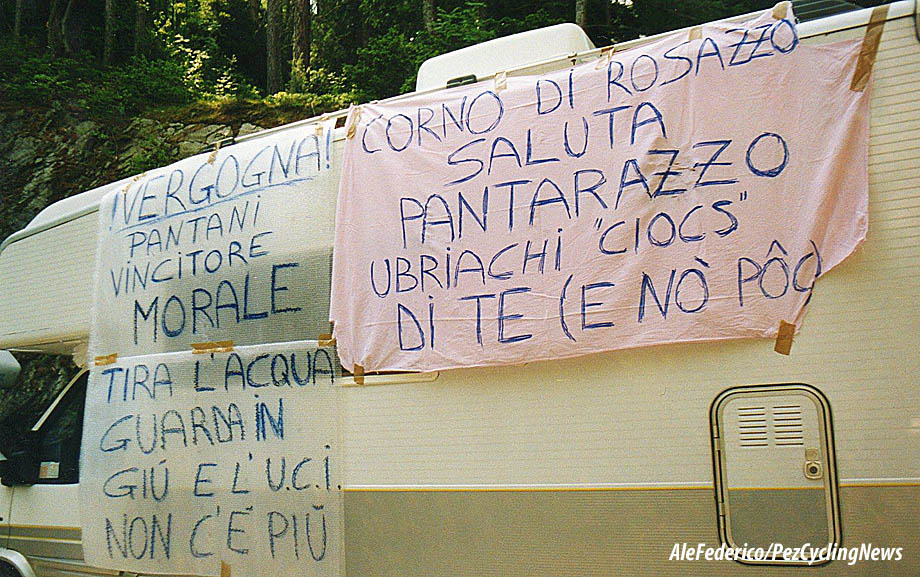 Against the UCI, against everybody. Shocked by Pantani’s exclusion

When the sun rose, that 5 June 1999, it was already warm. It was early morning and the road was closed. No noise around. Just a strong smell of grass and screaming of birds in the silver sky above me. I picked up my stuff and I was really professional to compact everything to stay beside me on the moto when two guys opening a tent beside me regretted for the noise of the previous night. They were two young guys coming from Imola. They drove more than 500 km to reach the Giro d’Italia to watch “their” Pantani.

We started to speak and I finally decided to stay with them for the whole day. We decided to climb to the top of that mountain. Before that I went to buy the newspaper in Aprica because motos were the only transportation (with the bikes of course) allowed to move on the roads that morning. We were moving to the top commenting the articles of the Gazzetta when a guy coming downstream said “Pantani is out of the race, over 50%!”. 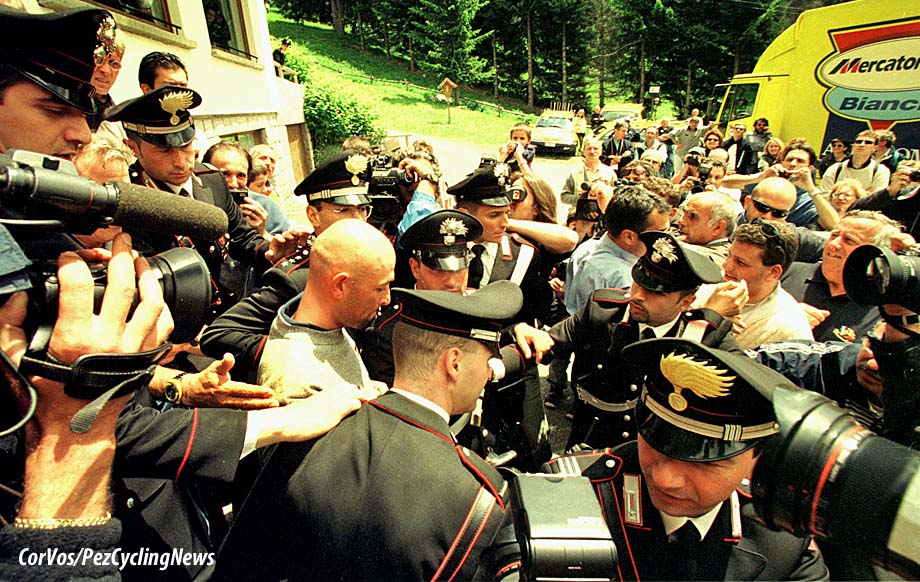 We immediately understood that he was talking about the blood tests of the UCI, but we thought it a stupid joke. We were proceeding to the top when we met a group of organized Pantani’s fans. They were very busy writing some posters against the UCI and supporting the “moral winner” of the Giro 1999: Marco Pantani. There was no reason to ask anything more. We had in that moment the confirmation that the previous guy was not making a stupid joke but we were really deeply part of a stupid situation. 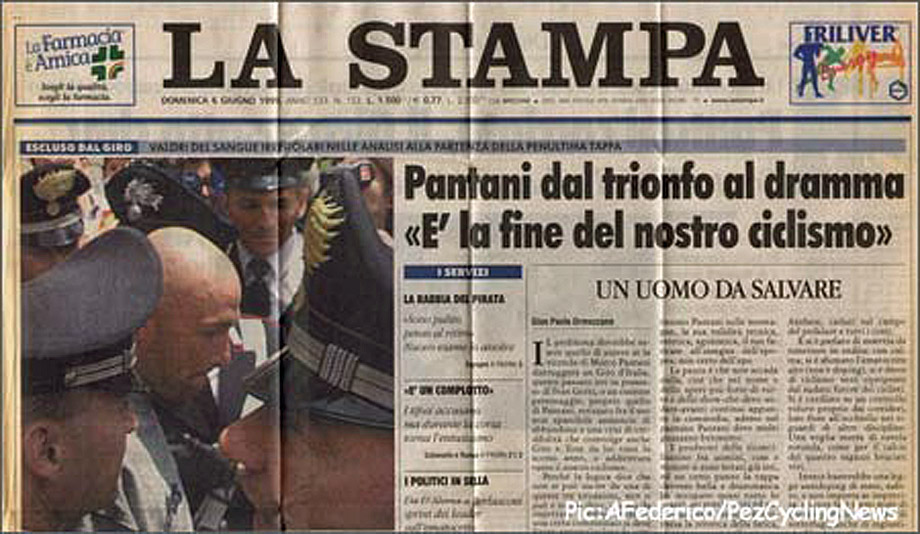 The La Stampa (National general newspaper) on 6th june 1999. ‘Pantani from the triumph to the tragedy. “It’s the end of our cycling”’

That day remains for me one of the worst one on the road. I’ve chased hundreds races and faced many different conditions: the avalanche of the Colle dell’Agnello during the Giro 1995, the Galibier cancellation during Tour 1996, the worst weather and traffic conditions but I never would like to live again that 5 June 1999. A race without leader. A Giro without maglia rosa. We were forced to stay on the mountain but I’m sure that nobody enjoyed the race. What I’ll never forget is an old man coming from the Czech Republic that after the “gruppetto” passage at the end of the race was still looking for Pantani. I tried to inform him about what happened in the morning, but I’ll never know if he really understood what I told. That’s was so difficult also for me!