Ever since we’d pulled the trigger on the big family adventure of 2010 – heading to Italy for 6+ weeks of living ‘la dolce vita’, I’d had it in my mind to take Mrs. Pez to ‘Barolino’ in the tiny town of Levanto on Italy’s Ligurian coast, to meet Marco and learn how to make the best negroni.

You may recall I first stumbled into Barolino while in town for the 2009 Giro’s 13th stage – that gruesome 65km time trial up and down along the coast – and stumbled out with a new friend. But not just any friend… Marco. 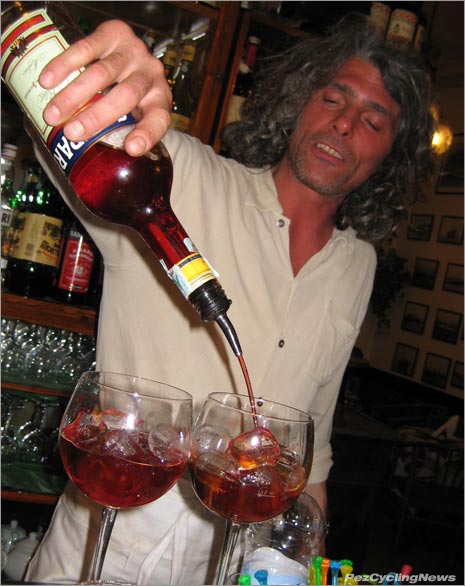 This guy is an original, one of a kind, a limited edition where they never made a model #0002. He’s a character in the truest sense of the word. And it’s not that I know him all that well – geez , I’ve spent an entire 3 nights of my entire life (spread over a year) in his company. But while in my middle age, I trust people less and my instincts more, and wholly admit to making snap personality judgments based on little more than first impressions, all of my subsequent impressions of Marco have be spot on and reaffirmed my initial call. 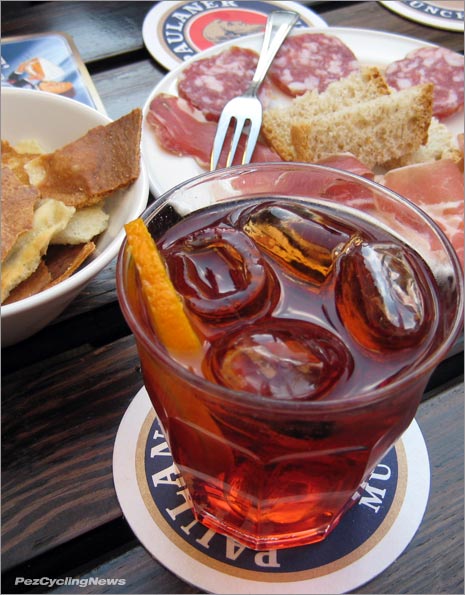 It was a year since I’d spent two excellent nights drinking in his fine establishment, which first impressed me with his huge selection of scotches, I wrote a story about it, and instantly vowed to return someday, hopefully with Mrs. Pez, so she could see for herself what an awesome place this is, and hopefully confirm that I wasn’t slightly off my rocker, lost in some kind of negroni-fueled bro-mance.

To recap – Marco has worked at Barolino for about 27 years now, he got it from his dad, who before that was a merchant seaman like so many of the generations of men who live along the rugged Ligurian coast. Some might consider 27 years doing one thing as a sentence of sorts, even draining your daily life out bit by bit. We’ve all seen people like that. 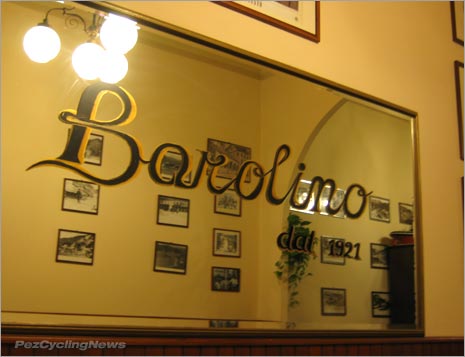 But just the opposite is true at Barolino. Maybe it’s because Marco possesses a ‘glass is always full’ attitude, or maybe he has simply found his calling and knows when not to mess with a good thing, but his enthusiasm for running his bar, and I suspect life in general, is refreshing, infectious, and spilling over every drink he pours.

The plan was to arrive at Barolino for apertivi about 6:00PM, then go for dinner, and return after for a night cap (or few). In classic form though, Marco was not at the bar as expected, and we were informed by his helpful sister-in-law that he’d be back at 8:00.

Negroni: The Authentic Pour
Everyone knows I love a good negroni, and the best ones of course are poured in Italy. But taking this drink one notch higher is in fact possible, when poured by an authentic Italian bar man.

Nothing would be better than not only drinking one of Marco’s expertly made negronis – but in fact capturing the artist at work with the sole purpose of sharing it with Pez-Fans everywhere. A quick Youtube ‘negroni’ search reveals an overpoured and watered down sink full of fake marketing bits, product pushing, and even Wayne’s World-style basement bartenders attempting to impress with tight tee’d tartlets… All of them worth a good flush down the poop shoot if you ask me.

Here, for quite possibly the first time anywhere – is a genuine Italian barista pouring a genuine Negroni –

Like any cinematic masterpiece, this one bears some review, because like the negroni itself, you simply can’t appreciate it fully with just one sip.

1. Marco: His personality and enthusiasm are clear and true. He’s not acting any differently than I’ve ever seen him. I love how his first order of business is that “caffй per Giovanni” – nobody goes thirsty in this bar.

2. Technique: Note how he pours with free-wrist precision. This skill could only have been developed after years doing what he does – pouring drinks. I love how he finishes of the Martini Rosso pour with just that tiny extra bit of “bah!”, and a “da!”.

3. Campari: The bottle almost leaps from the well into his hand, and then he finishes the pour with his eyes closed – pure genious.

4. Gordon’s Gin: The best gin by far for this drink. It may not be the highest-brow version, or even that great in a martini, but its softer flavour is ideal for the negroni. Did you catch his comment: “bomba-tomica” – (yeah – atomic bomb.)

5. Mini-Cooper: You gotta love any bartender who so approves of your drink choice he pours one for himself. Marco had about 3 different cocktails going behind the bar that he simply referred to as “mini-Coopers”… small versions of whatever.

Now, back to our story… 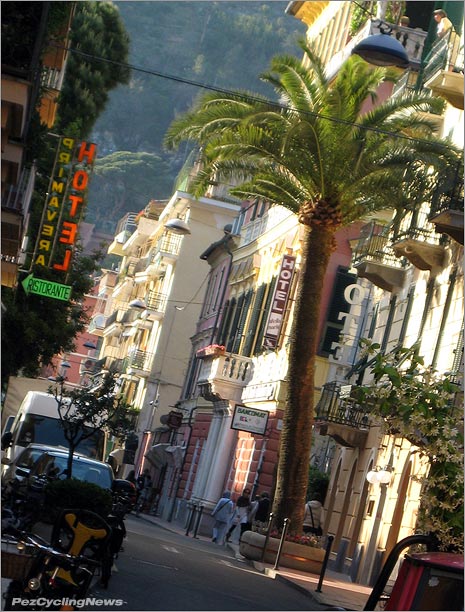 I’d called several times since we landed in Italia, to connect with Marco and confirm I was making the trip back it to see him again. We were staying about 30kms west of Levanto near Sestri Levante, another gorgeous place and excellent base for a cycling holiday, so an evening out with Mrs. Pez was easy to plan.

But this being Italy, and Marco being Italian, I figured I’d best make the requisite many phone calls to tee up the exact time of our arrival. Anyone having spent any time arranging social, business, or other appointments with Italians will likely know what I’m talking about – time there is more of a relative concept, much more general in execution than it is to us North Americans. 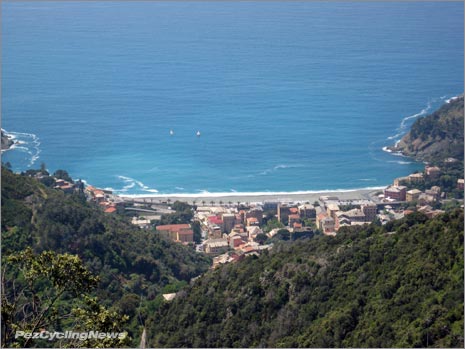 One of the towns on our way to Levanto via Passo Bracco. 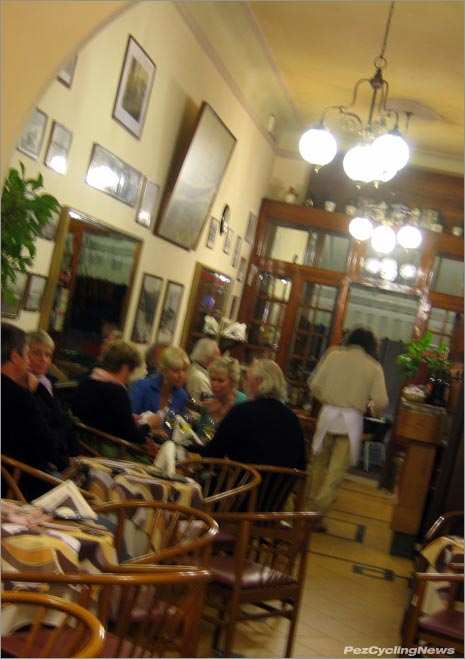 We thought we’d start the eveing with negronis at Barolino, then return after dinner for more drinks. But contrary to what we’d confirmed via several phone calls, (yet complelety consistent with planning anything in Italy), Marco was not in the bar when we arrived, and now was not due in until after dinner.

His sister-in-law was holding down the fort, and although we’d never met, she knew us from the phone calls and pointed to our daughter Loredana’s birth announcement posted along the ‘wall of fame’ atop the bar. 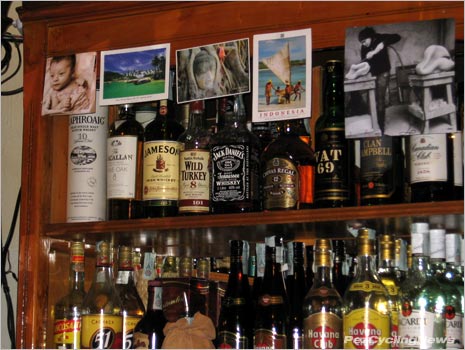 How often do you spot a picture of your own child in a bar in a foreign land? It was all good here as we’d sent Loredana’s birth announcement 6 months earlier.

By now we’d been in Italy for a few weeks, and used to adjusting our plans last minute, so we started our evening with a cocktail at bar situated on a lively intersection, where the Spring sun warmed us as it lowered into the sea.

Sometime after dinner we strolled back to Barolino, and there was Marco – behind the bar and complete master of his domain. He was busy, mixing drinks, making sandwiches, serving his guests with an intensity somewhere between whiling-dervish and Tasmanian Devil, but we soon learned he was running solo tonight as his assistant has ill. Regardless, he welcomed us with that big grin, booming voice, and open arms. 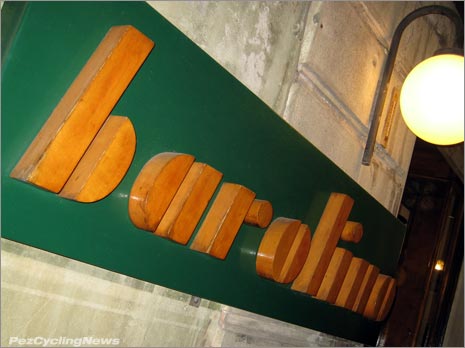 I was a little nervous – introducing Teresa to this guy who I’d been raving about for almost a year – I hoped for the best. It took all of about 3 seconds for my concerns to be dashed as Marco’s huge grin, even huger hair (I don’t think he’s cut it in a year), and huge-issimo personality instantly set us at ease, and signaled the start of a great night. 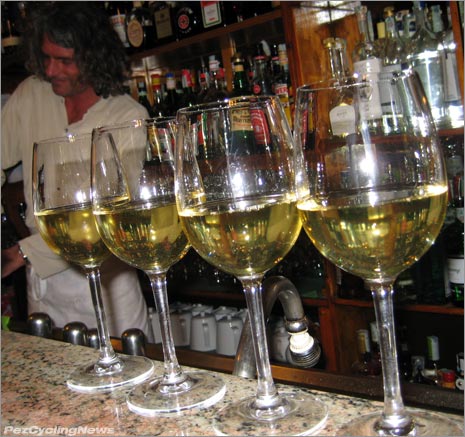 I marveled at how accurate his free-pouring was – glass after glass with exactly the same amounts in each.

The drinks flowed, and Marco joined us in more than a few. Mrs. Pez quickly began speaking Italian with him, and I could see she was completely drawn by his kavorka, but how could I blame her – I was guilty too.

What we talked about I have no idea, all I can tell you is the time flew by, the conversation never slowed below a gallop, and each topic seemed more interesting than the last. 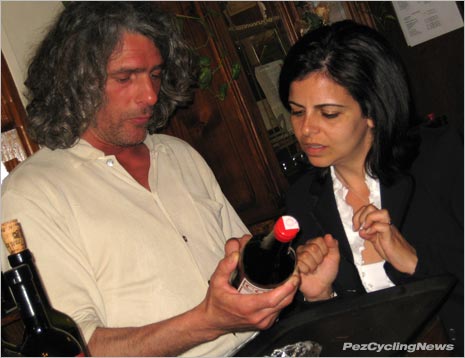 At some point Mrs. Pez enquired about a nice digestivo, something like an amaro that we’d taken a fancy to. Marco suggested we try a sip of Chinato Cocchi, and then promptly presented an unopened bottle to Teresa to take home. His gift, of course.

The hour to go came much too soon, and I could easily have sat there till the wee hours, and Mrs. Pez agreed. Our money was no good there, and after a short discussion where Marco flat out refused to let us pay, we graciously accepted his generosity.

Afterwards I felt a mix of satisfaction from an evening well spent, (and that my instincts at recognizing a person of quality had not failed me), and a twinge of melancholy because I once again had no idea when (or if) I’d have the pleasure of a cocktail poured by Marco at Barolino. All I can say is go to Barolino if you ever get the chance. 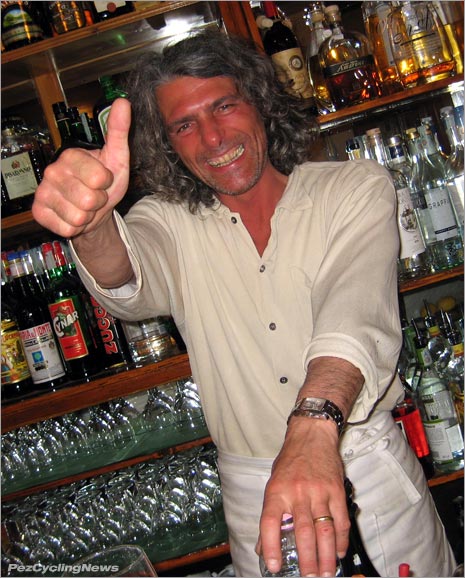 PEZ Recommends:
• If you ever get the chance, stop in to see him: