Cafй Domestique, a cycling-themed coffee shop off the main street in the small town of Dundas, Ontario, isn’t your ordinary coffee shop. In fact, it’s something they seem to be proud of. The sign that regularly sits on the sidewalk in front of the shop – a 110 year-old early-Edwardian house – once read: “We may not be a Starbucks, but we’re okay with that…” 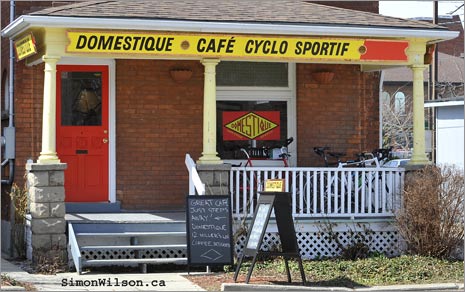 From the authentic ProTour jerseys and bikes hanging off the walls, to the shop’s carefully selected choice of coffee, Cafй Domestique truly is far from being a Starbucks. In opening Cafй Domestique, Krys Hines, the shop’s owner, was able to do something he always wanted to do – unite his two passions, coffee and cycling.

Hines has always been connected to cycling and coffee. Growing up in Toronto, just a few blocks away from Team Sky’s Michael Barry, Hines raced cadet and junior. While in his twenties, he ran a cafй where riders from Saturn Canada, including Barry, would come in for coffee and day-old leftover pastries that Hines was happy to give them.

However, Hines’ passion for coffee went beyond his hours working at the cafй – he also roasted coffee at night in his apartment. It wasn’t long before Barry, who was injured and stayed home from Europe to study at the University of Toronto, starting coming over at night to drink Hines’ home roasted brew instead of studying. 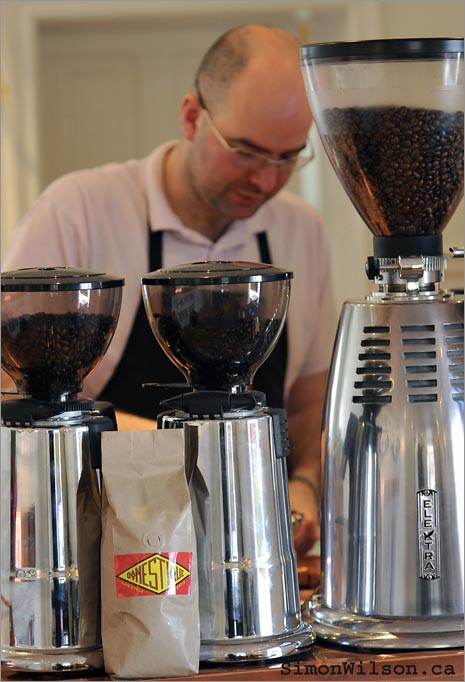 Although Hines was busy roasting coffee, he also wanted to be a frame builder. He got a job as a designer for Gardin Bicycles where he had the opportunity to work with athletes such as Curt Harnett and Lori Ann Muenzer.

After leaving Gardin, Hines went to build frames for Mariposa, the legendary handmade brand built by Barry’s father, Michael Sr. Shortly thereafter, a young start-up bicycle company called Cervelo moved in to the same building where Bicycle Specialties was located. Still in their early days, Cervйlo often came to borrow tools from Bicycle Specialties and Hines got to know Cervйlo founders Phil White and Gerard Vroomen quite well. To this day, Hines still maintains a strong relationship with the company. 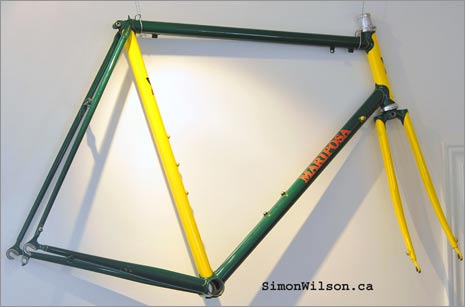 Hines’ connection to the cycling world led to him being asked to go to the Tour de Beauce as a team mechanic and manager for several teams. He brought along an espresso machine, and became known as the go-to guy for good coffee.

Despite his involvement in frame building and coffee roasting, Hines had plans to open a cycling-themed shop in Toronto in the mid-1990s. However, when the provincial government at the time cut funds that Hines was relying on to open his shop, the project fell through.

It was only after recently moving to Dundas that the possibility of opening Cafй Domestique resurfaced for Hines. Finally, he was able to bring together his years of experience in both the cycling and coffee industries. On March 20, 2010 – the first day of spring – Hines opened Cafй Domestique.

The inspiration for the name Cafй Domestique says a lot about Hines’ philosophy behind the shop. Put off by snobby, pretentious high-end coffee shops in the big city, Hines says that ‘domestique’ sets a tone and implies a measure of humility, a characteristic that is inherent in the role of a domestique in cycling. No doubt, Hines was also inspired by his now long-time friend, Michael Barry, who’s role as a domestique has made him well known in the professional peloton.

In opening Cafй Domestique, Hines’ goal was to create an environment where everyone– cyclists and non-cyclists alike – feel welcome. Cafй Domestique’s customers range from business executives, to new mothers, to local city workers who stop in to grab a coffee on their break. Whether they are cyclists or not, they all come for Hines’ coffee, which he says is the real star of the shop. 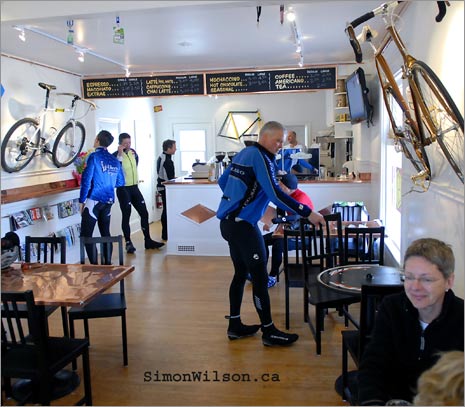 Hines’ carefully chose Classic Coffee, a locally roasted bean, for several reasons. In business since 1974, the Rufion family has experience, which Hines says comes through in their product. After he toured their factory, Hines was impressed by their level of professionalism. Hines also said that Classic has the lowest CO2 footprint compared to traditional big roasting companies. Simply put, Hines says that he wouldn’t use any other coffee.

In order to ensure that his espresso is optimally brewed, Hines has five grinders for just three different blends. Once ground, he cranks his espresso out of an Elektra machine, which he modified himself after buying it used. Hines chose this particular machine because it came from a family business and was simple, which he felt was in line with the philosophy behind Cafй Domestique.

While Cafй Domestique attracts clients from all walks of life, there is no hiding its strong connection to cycling. The Hamilton Cycling Club and Mazur Coaching regularly use the shop as a meeting place for their rides, and many other clubs from the Greater Toronto area and the Golden Horseshoe use it as a halfway point for long rides. Hines says that Cafй Domestique is becoming a popular place for riders to meet up before, during and after their rides. He was even able to convince Barry to come in to the shop for a group ride and book signing when he was recently in town. 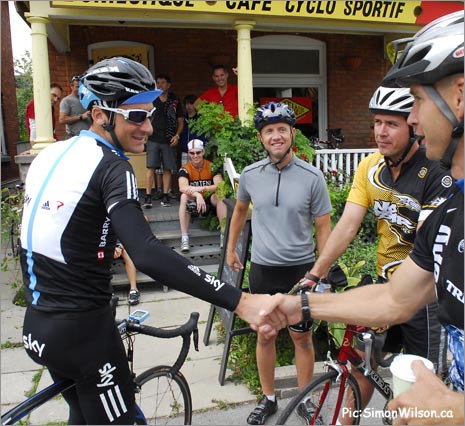 Even in the off-season, Cafй Domestique is also becoming a popular place for riders to meet up and enjoy a coffee. The shop’s TV often streams races live from Europe, or shows past race re-runs. 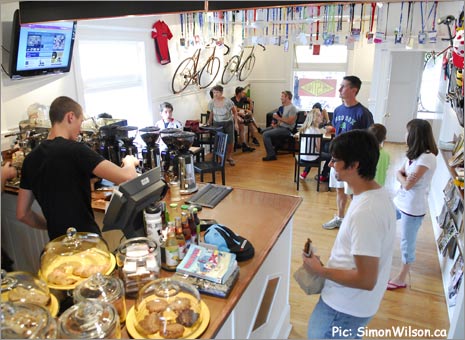 The shop is also full of cycling memorabilia for customers to admire. Two of Barry’s jerseys signed by Team Sky’s Tour de France and Giro d’Italia squads hang on the wall, right beside a replica yellow jersey signed by Carlos Sastre and a replica green jersey signed by Thor Hushovd from the Tour de France. Bob Blumer donated one of Christian Vande Velde’s Team CSC jerseys that was used for an episode of Glutton for Punishment, since it was doing him no good sitting in a drawer in Los Angeles.

However, perhaps most famous is the yellow jersey worn by Canadian cycling legend Steve Bauer, which hangs behind the bar in a frame above the espresso machine. Hines says that the jersey, which is torn following a crash Bauer suffered while wearing it, is on permanent loan. Bauer thought it would be better appreciated in the shop rather than sitting at home. 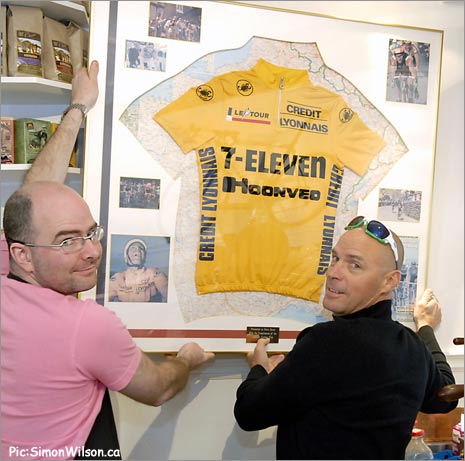 Hines also has a constantly rotating supply of bikes that he hangs on the shop’s walls. Thanks to his continuing strong relationship with Cervйlo, Cafй Domestique has featured the bike that Fabian Cancellara rode en route to winning Paris-Roubaix in 2006, the time trial rig Dave Zabriskie rode to victory in the prologue of the 2005 Tour de France, and the bike that Carlos Sastre soloed to a stage victory on in the 2003 Tour de France.

The shop has also featured a wide range of bikes from Michael Barry Sr.’s vast collection (he has roughly 100 bikes), including a CCM Flyer track bike that had never been built up after going out of production in the 1950s. Hines even has one of his handbuilt Mariposa frames on display. 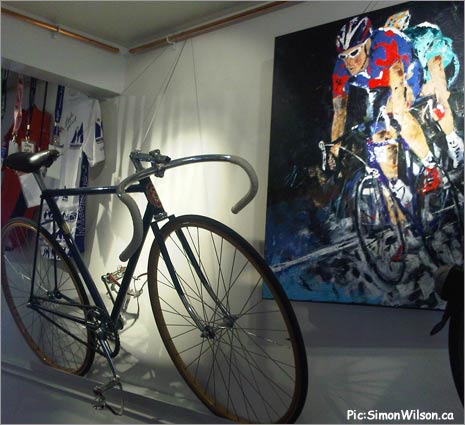 Several of Hines’ tables are made of Zipp disc wheels that he was able to obtain from a wheelchair company that is partially funded by Cervelo. His kid’s table is a 650d wheel used by Barry in the team pursuit at the 1992 Commonwealth Games.

Looking forward, Hines would like to get back into bike design again when the moment is right. Upstairs from the coffee shop, Hines has set aside a room in the house for this very purpose. Should the project ever get off the ground, he would like to build Domestique branded bikes. However, for now, he is busy serving customers, and no doubt, anxiously awaiting the start of the up-coming season.

See the website: https://www.cafedomestique.com/
(Although it’s still under construction.)