We recently welcomed Gearlink.com to the PEZ pages, and by now a few thousand of you already know they sell a great selection of cycling gear online. The man behind Gearlink.com is an interesting story on his own, as an ex-Polish national team rider and outspoken voice against his country’s old communist government. Here’s an intro to the company and the man…

The man I’m talking about is Mirek Magdziak, who like many children in mid 1970’s Poland, took up sports as a way climb the ladder, and make a better life for his family. The country was under strict communist rule, as this was still years before the fall of the Berlin Wall and the collapse of the Soviet Union. Life was tough, opportunities were few, and joining a national sports program was a very good way to improve your lot in life. 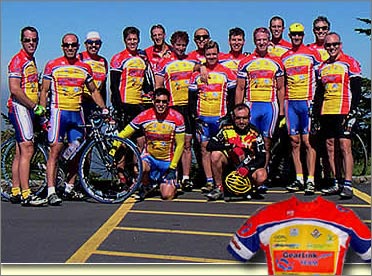 GearLink has become a sponsor and manager of Gearlink.com TEAM (www.gearlinkteam.com) since 2002. The cycling team has about 80 active members and the number is still growing.

Mirek began cycling when he was 12 years old, and he quickly excelled at the sport. He soon joined the Polish national cycling program, and found himself alongside other future pros like Lech Piasecki and Zenon Jaskula. He was a member on Polish National Team from 1974 to 1983, and he earned 6 titles. He became a National Champion for PNT. In 1983, he moved to US continuing his cycling career until 1988.

Mirek was a sprinter, but not a bad TT rider too, and rode with the country’s best 4 man TT squad. He trained for the 1980 Moscow Olympics, but was too young to get a selection, and then he missed the 1984 Games due to the Eastern boycott.

As a national athlete – Mirek was able to travel to many western countries, and his eyes were opened to the possibilities of a better life for him and his family. Becoming more frustrated with the way of life in Poland, he joined an “underground” group and became more active in opposing the government. Trouble was, he couldn’t just leave because at the time passports were the property of the government, so it was impossible to get travel documents for his wife. The government started cracking down on the “subversive element”, and Mirek knew he’d have to leave Poland or probably go to jail. One week after his first child was born, he left for Austria and got political asylum. He would not see he wife or daughter again for 4 years.

Fast Forward to 1999
Mirek is now a citizen of the United States, the dotcom boom is underway. Since leaving Poland, Mirek has learned a lot about exporting and shipping from 5 years supplying denim to Poland. He’s developed a mind for business, and he sees the obvious opportunities the internet presents for selling worldwide.

The passion for cycling is still in his blood, and it’s just a matter of time until he launches one of the first online stores selling cycling gear. Voila – Gearlink.com is born – to offer a bigger selection of higher-end cycling products than a local shop. Soon the GearLink.com website became an online catalog for all cycling enthusiasts nationwide.

In his own words: “Our goal is to carry the highest quality products cycling related. We always want to deliver best quality for reasonable price. Selling online allows us to offer merchandise for less than standard retail bike shops. In the near future we will be expanding our clothing line to include private label.”

Based in Clearwater Florida, the business has grown so much that they’ve now opened a local storefront to serve the expanding local market.

Today Mirek, his wife, and two children (two daughters 20 and 12) live in Florida. Mirek still finds time to ride about 200 miles a week, and he told me that he won last night’s “Tuesday Night World Championships” in Tampa Bay!

But perhaps in the ultimate flip of the bird to the old commie government, Mirek is a true entrepreneur, self-made, and selling goods all over the world. Today, GearLink stocks over 3000 different items including clothing, bikes and frames, components, helmets, book, videos, saddles shoes, tires, all for road and mtb – the list goes on. So check ‘em out online and give thanks for capitalism and the internet by treating yourself to a new jersey or something…

Go to GEARLINK.com
– and tell ’em PEZ sent ya!
Like PEZ? Why not subscribe to our weekly newsletter to receive updates and reminders on what's cool in road cycling?

US Pro Champs Preview: The Exhibit!