Today we introduce the newest addition to the PEZ-Crew and our newest eyes, ears, sweat and tears perspective from a saddle inside the pro peloton. Rook Campbell joined the top ranked Italian based women’s pro team Michela Fanini – and is keen to take PEZ-readers along on her first full season in Europe. 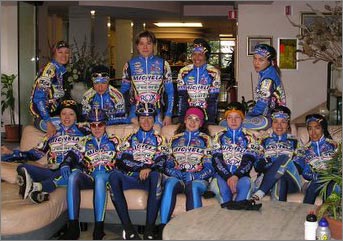 Rook joins some serious racers on the Michela Fanini team.

Now, I am starting a new era on the bike, as I moved to Italy to join my new team, Michela Fanini Record Rox. To say the least, I am pretty stoked about signing a contract with Michela Fanini, as racing in Europe is a dream. I arrive prepared to feel that European racing is more brutal, more severe, more epic, tougher, and faster than the reports promise. I guess, I arrive prepared to be unprepared, and then, hopefully to rise to the occasion – to learn that there is much more to learn.

I am here to embrace cycling, and I want the roads, mountains, races, teammates, and competitors to help transform me into a stronger, faster, and wiser cyclist. Fortunately, I have a little street toughness to keep me bouncing back- a few summers as a bike messenger in San Francisco. Plus, I have a solid year of professional racing and laboring as a domestique and the miles of training according to the word and guidance of my coach, Dave Jordaan – who I like to elevate to deity status. And I have just plain old fashioned desire.

The Michela Fanini team is based in the Tuscan city of Lucca.

My team has some veteran cyclists with a million miles in their legs and a taste of victory fresh on their lips, and in the two months that I have been with the squad, we have rallied together in training, and our time together off the bike is quality as well. We kick back easily with coffee – or me with the occasional substitution tea, though it is a rather stigmatizing drink here – music and movies on our computers, or improv competitions of track stands in the hotel back lobby.

The Good, The Bad, and The International Home Remedy
The romantic tales and cliches of Italy and Europe appear true to form, but also, the lore of being a professional cyclist appears true in the good, bad, and tasty. Now, it is very cold: there are snow storms in Lucca, Toscana, Italy which is where the team is based. Just as the snow arrived and the temperatures dropped, the heaters in the team house stopped working. Why remains a mystery.

The good news is after one week of sleeping in cycling tights, sweats, three pairs of socks, a couple shirts, a jacket, a wooly winter hat, and gloves under many blankets and still knowing the cold deep in my bones, it is now training camp week, which means I’m loving the heater in my hotel room, though the weather is still rather nasty.

These episodes of disaster also provide for good conversation in the Italian bars (ie:snack bars), which is good for my Italian language skills, though I definitely prefer to have basic warmth. This is also true with other things normally thought bad, like a common cold.

Fruit Bowls and Onion Brew
Having a cold in the company of an international house – I currently live with one direttore sportivo from the Czech Republic and one teammate from Poland – is cause for all sorts of advice and home remedies. In the case of my cold, I was told to eat a huge bowl of fruit containing over fifteen pieces of fruit plus seven lemons to be consumed within one and half days, but it was the tall cup of hot water with half an onion that proved a bit too much for me. My resistance to drinking this home onion brew gathered me words and looks of shame and dismissal, but the experience was otherwise quite entertaining.

So, yes, there are plenty of absurdities and discomforts to the glamorized image of the international professional cyclist, but all is good and I am taking the bad as good and necessary in this quest on the bike.

From Miles & Pounds to Kilometers & Kilograms
At the time of this first write, I am few days out from the kick off of this season of high expectations and many unknowns. Though my Italian is improving day by day through varying sources of credible language, slang, and dialect teaching, I experience training camp as a series of days where the duration, intensity, quantity of climbs, and intensity of training slaps my expectations and sense of understanding in the face a bit too often.

Probably, this is a good thing, to ready myself for the unknowns and to become more adaptable. Maybe something of this is like the idea of not knowing exactly where the finish line is or the summit of a climb, all the while you must keep attacking when you are uncertain what to conserve but fearful to conserve too much.

Basically, training is kind of like an Italian newscast: you see video footage and there is no narrative voice, and I think this must be a mistake of the newscast, but this is not the case. Rather, there is just this moment of pause, where you may see something horrific, beautiful or interesting, and for a few seconds you are allowed to imagine what this about, and then a voice and face appear and explain what is really happening. What I mean is that for me on and off the bike, there is a desynchronization of doing, seeing, hearing, and knowing.

And so it goes with being a foreigner and learning all things new. Once I thought we were going out for an easy training ride of two or three hours, and my onboard food and drink was for this plan. After many climbs and nearly double the time and pace, I was not in such a good state, so when our team directors appeared with pastries on the roadside, this was a moment of beauty, true out and out beauty- the Italian pastry.

End of Winter: Racing Season & Spring Classics
The snow and ice have us in a holding pattern in our hotel, though we have two trainers that are in constant use through regular shifts throughout the day. I feel certain this will only have us take to the road with an additional madness when the ice melts and the weather is half way welcoming.

With the first race, Citta’ di Castenaso on March 6, followed by Trofeo Citta’ di Rosignano on March 13, and then the Primavera Rosa (Milano-San Remo) a week later, we will tear up the road with the proper grace and agility that becomes all professional cyclists. In the upcoming months, I am going to write what it’s like to be a professional cyclist in Europe on a women’s team, and I hope my words will deliver a little of the road grit, euphoria, and stupor that is bound to begin in the first few races.

Rook Campbell is a 28 year old American pro racer living in Lucca and riding with the Michela Fanini team. In the coming months, she hopes to share her experiences of being a professional cyclist in Europe on a women’s team, and to deliver a little of the road grit, euphoria, and stupor that comes her way.