The Colorado Premier Training-Colnago Professional Team has just signed the last of its 10 members, and is well into training camp in Colorado. As the newest women’s team to join the NRC circuit, we discover the ladies are a potent package of athletics, brains, and optimism.

By: Aimee Vasse
It’s day three of the CPT-Colnago Professional Women’s Team camp in Boulder, CO. Director Steve Owens and Manager Chris Wentz have just concluded a discussion on the role of each team member. The mood is buoyant and the discourse continues; everyone is very excited to be here meeting teammates. 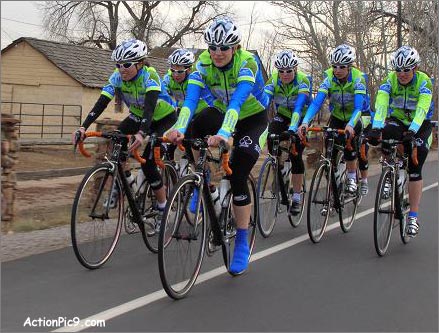 The newly formed CPT-Colnago team is a great sign that the sport is growing, and that women’s racing just got a little tougher.

How Lucky We Are
Elite sprinter, Nicky Wangsgard regales the team with her living situation. She has cordoned off a small sleeping area in her basement with none other than a bed sheet, as renting her upstairs rooms supports her bike-racing habit. An animated storyteller, she segues her riveted audience into a sobering tale of her September Vuelta El Salvador experience, where the eruption of a long-dormant volcano and subsequent flooding from Hurricane Rita tragically killed over one-hundred people. “Here we are about to race our bikes and we’re surrounded by devastation. We struggled emotionally to continue the tour,” she explains. “After a while, however, we put the situation into perspective and realized how lucky we are to be ‘living the dream’. This could be our last day on the bike, but today we’re fortunate to be racing and we need to enjoy every
moment.”

Living The Dream
Wangsgard’s story evokes perhaps the most salient and pervasive sentiment at the CPT-Colnago team camp. Cliched, yes, but “living the dream” is on the mind of each and every member of this team as they embark on the 2006 season. “The team has tremendous energy and excitement, because we’ve all worked so hard to get to this point, and now we’re here,” asserts Mary Schuette, a powerful all-around rider and time-trialist. She spent last year recovering from surgery to repair a constriction in her iliac artery, which shut off half the blood supply to her left leg. “I rode through the injury during the ’04 season without too much success,” says Schuette, proving her tenacity and dedication to cycling. 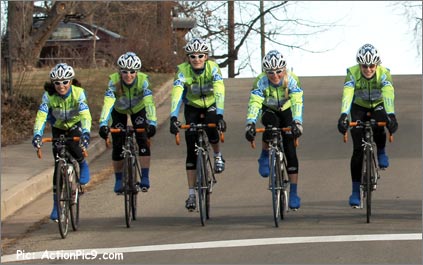 Schuette brings up another unique aspect of the team, which is the absence of a single team captain that can sometimes overshadow the other riders. “We’ll have a different leader for different races, which provides a tremendous opportunity for each member of the team to shine,” she explains. 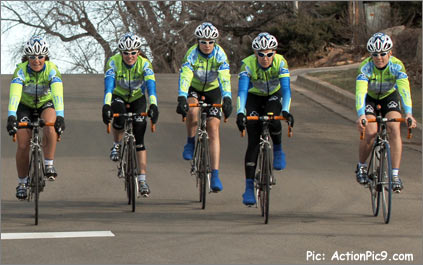 Climber Marisa Asplund agrees: “It’s always good to have a veteran rider who is more experienced, but we have a level playing field, we all have the chance to do well, and if you’re having a great race, I don’t think you’re going to be called back to the field from a break to help someone [pro forma],” she says. When asked about “living the dream,” Asplund spells out a typical day, “I wake up at 5, spend an hour or two on the trainer, go to work, get on my bike and ride until dark, then put in another hour on the trainer. I don’t really get any down time right now, but come this summer I’ll be using that phrase a lot. I guess you could say I work to live; I work to race my bike.”

Asplund is a middle school science teacher in Durango, and not the only scientist of the bunch. Climber and mountain biker Megan Monroe works for the City of Boulder Water Quality Department and runs an after-school science program. She plans to extend her work with children to the cycling realm; she is spearheading a team effort to organize school visits and give underprivileged children the opportunity to race bikes. “Although I find it funny to be put in such a position where people look up to us, it’s what all that time on the bike gets us! I guess we asked for it, so we need to do something about it,” she answers.

The resident scientist, however, is sitting at the kitchen table crunching numbers, on her way to a double degree in chemistry and math. An all-around excellent rider, not to mention a former member of the U.S. Mountain Bike Team, Molly Hummel is the daughter of two professional riders and has been enjoying the sport since the age of 12.

For the 2006 season, Hummel has decided to switch over to road racing, and junior member Chloe Forsman will follow suit. At the age of eighteen, Forsman is the reigning American National Champion, and the Pan American Champion in cross country mountain biking. “I plan to let loose on the road this year,” she asserts, but team jester, part-time biochemist, and bronze medalist in both the Canadian National Pursuit and Criterium Championships, Lisa Sweeney won’t let this comment go without delivering a side-splitting “you can come up to Canada where the drinking age is 18.”

In contrast to her wit, Sweeney took on the serious and selfless role of piloting a tandem bike for a visually impaired cyclist. Together, they qualified for the 2004 Paralympic Games in Athens. This year she’s on her own again, and is thrilled to be a member of CPT-Colnago. “We have a good mix of personality types that I’m sure will make for a good team bond. With regards to skill on the bike, it’s an amazingly well-rounded team. Every strength required to win bike races is there.” 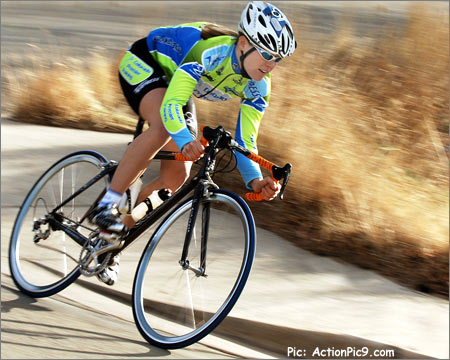 Miranda Duff will use her track skills to burn up some pavement.

Meanwhile, track standout Miranda Duff and two-time Mt. Washington Hillclimb champion, Aimee Vasse, have paired off to work together on their weaknesses. They, like the 4 other pairs of women on the team, will support each other throughout the season. Duff and Vasse already have exchanged several emails, Duff giving Vasse instructions on sprinting and bike-handling exercises, and Vasse teaching Duff the yogic breathing and relaxation exercises she employs on a long climb.

Vasse is awed that Duff even has time to practice her sprinting, as her work schedule mirrors that of Asplund’s; like Asplund, Duff is no stranger to the trainer. “I usually get my workout in after work, which usually means inside on the trainer or rollers, or doing a spin class or two at the Nike Fitness Center. My social time is chatting on the bike,” she notes.

Former biochemist and journalist Vasse is trying to juggle living two dreams at once; being a professional cyclist and writing about it. The former is an auspicious twist of fate, and one which will culminate her nomadic years chasing the national cycling circuit. “I walked into a local bike shop, while visiting my sister in Connecticut, to take care of a few mechanical issues. One of the employees there knew Steve and vaguely recalled him mentioning something about a women’s team out of Boulder. The very next day I was on the phone with Steve, and the rest is history,” recalls Vasse. 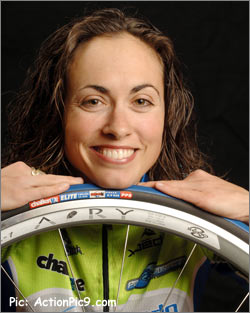 Aimee Vasse is one of the team’s climbers, and yet another one of their riders with an education in science.

You Gotta Have Faith
“Prior team directors had been hesitant to sign me due to my difficulty with the criterium,” says Vasse. “Steve and Chris, however, embraced the challenge head on, and told me that if I wanted a spot on the team I had to move out to the Boulder area to start working with them on my bike handling skills ASAP.”

In fact, the amazing faith that Owens and Wentz have in each and every woman
on this team ultimately is what makes CPT-Colnago tick. “I probably have more
faith in you guys than you have in yourselves,” Steve tells the team, and the
confidence is starting to sink in. “We all belong here and deserve to be
aggressive and stay at the front of the field,” affirms Jen Gersbach, a former ski
racer from Vail who touts a host of podium finishes in every aspect of
collegiate cycling, from the downhill to the crit. Gersbach, like Schuette, has
traveled a rather bumpy road to reach the professional level; she broke her neck in a skiing accident and was forced to limit her riding to the trainer. “I used
the time to work on my pedal stroke while becoming mentally focused to come
back even stronger,” she explains.

In any event, if Owens and Wentz prove correct in their assessment of the team, and the team is able to maintain the cohesion already evident in group rides, team conversations, and their frequent communication following camp, the
CPT-Colnago women will, without doubt, “be a force to be reckoned with on the circuit next year,” says Sweeney.

Sponsor Love – Making It All Possible
CPT-Colnago, however, wouldn’t be in motion without the help of its sponsors. The team sends its warmest gratitude to Trey Henderson and Steve Norwood, respectively the U.S. and Colorado Representatives for Trialtir-USA, which graciously supplies the team with Colnago bicycles, Campagnolo components, LAS helmets, Northwave shoes, and Biemme clothing. Josh Veryser, of Sports Express, who will help the team transport their bicycles across the country. Trey and Josh spent the better portion of their weekend at the team camp discussing the products/services and answering questions. Very kind regards to our other sponsors, including Honey Stinger bars and gels, Carb-Boom recovery gel and drink mix, Rudy Project eyewear, Xero wheels, Ultimate Support bicycle stands, Pure Endurance nutritional and testing services, Boulder Sports Botanicals balms, and of course title sponsor, Colorado Premier Training. Vasse also would like to extend a personal thanks to Brad Custer of Pure Endurance, who endured her scientific and sponsorship inquires for the better part of an hour on the phone!

Get More Info
With those colorful neon team colors, the ladies will be hard to miss, but you can be sure to find the latest at the team website: CPT-Colnago.com

Travel: France At Its Finest In June