The sad news of the death of Michele Scarponi was announced on Saturday morning by his Astana team, the shock was felt throughout the pro peloton. Michele was one of the nice guys, always laughing, always happy. Ed Hood remembers ‘Scarpa’ and looks back on his career. 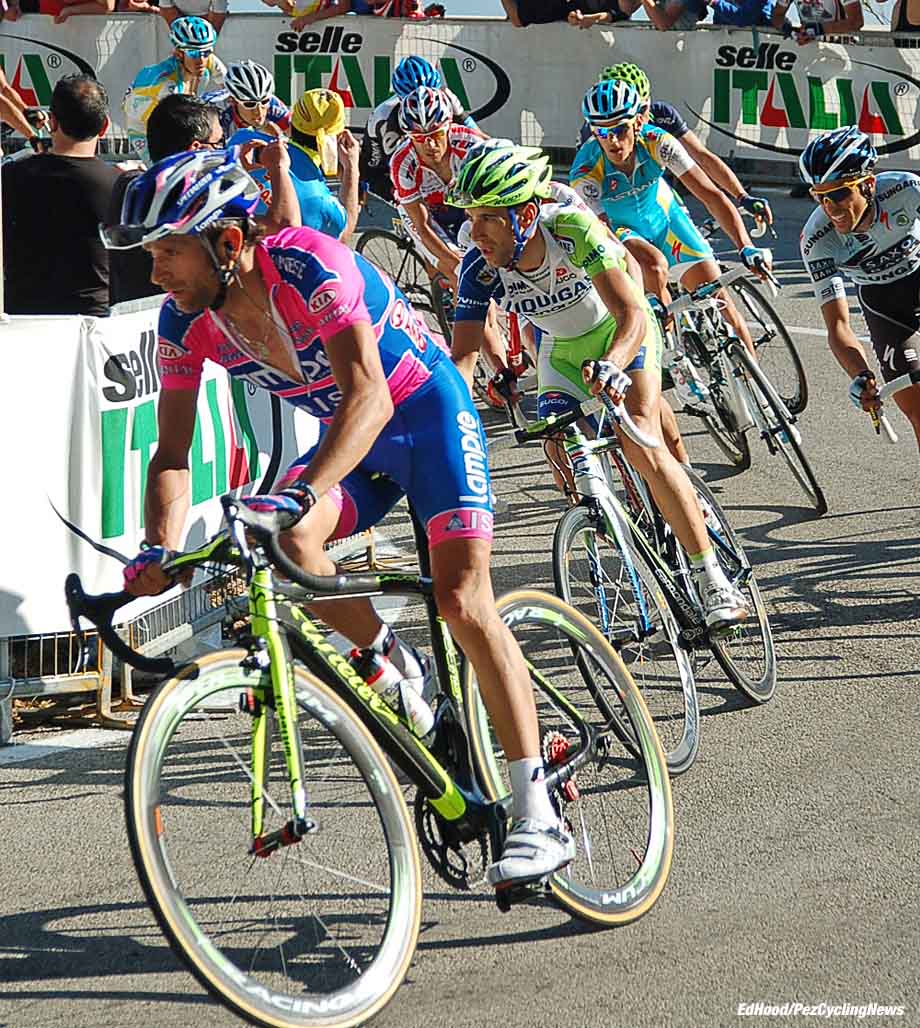 The Giro 2009, Dave and I are in our hotel room watching the stage finish on TV; we’d worked the Stage 18 start that day in lovely Sulmona – home to the famous Roman Poet, Ovid – our piece was written and the pictures sent.

There was a breakaway coming into the finish in Benevento and we’d have liked big, strong, hard working Danny Pate (Garmin & USA) to win but there was a man in there we knew was just too wily for this three breakaway companions, Pate, Felix Colombian Cardenas and Dane, Lars Bak – and sure enough Michele Scarponi rolled the three of them over the big flagstones in the finish straight. 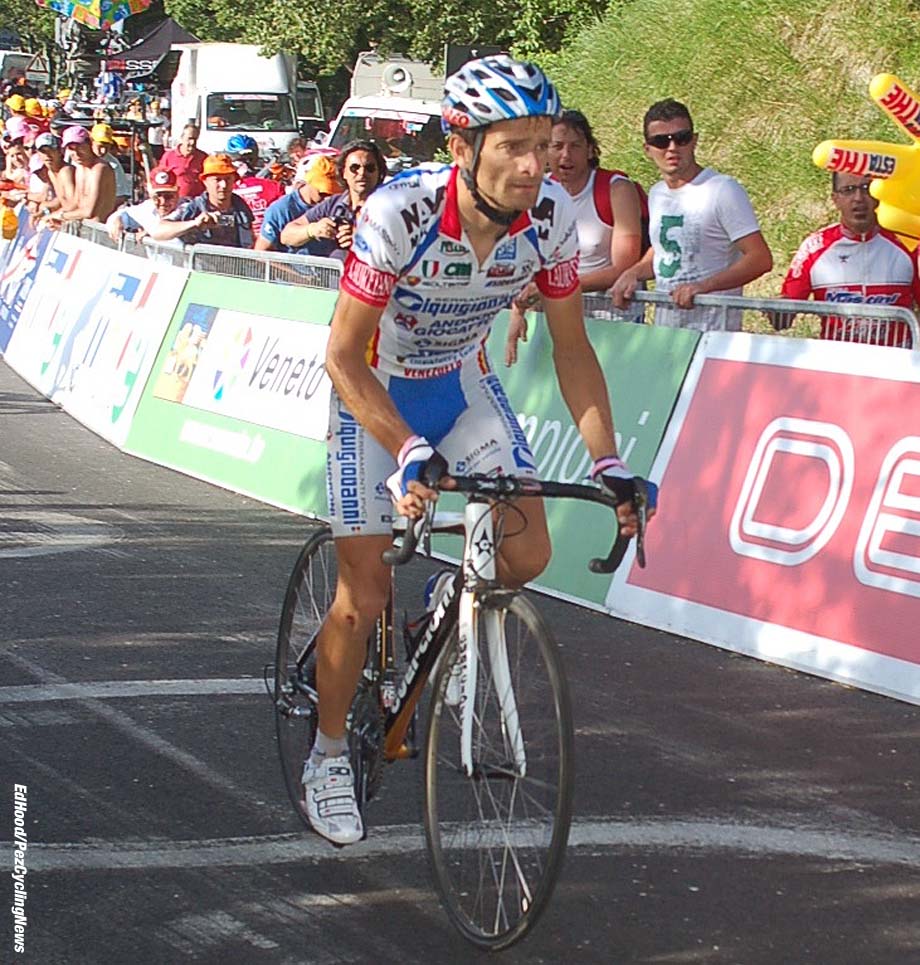 It was second stage win of that Giro and I remember us agreeing that he was a ‘tough opponent and the professional’s professional.’ Scarponi was riding in the colors of Division Two team, Gianni Savio’s, Serramenti PVC Diquigiovanni Androni Giocattoli. You can always tell much about a team’s finances by its name, compare Savio’s squad’s handle to ‘BMC’ or ‘SKY’ – but Scarponi was back from suspension and just glad to be in the peloton and racing. If you want all the details on his suspensions then check elsewhere, here we’re adhering to the code laid down by the Spartans in the sixth century BC; ‘De mortuis nil nisi bonum.’ – ‘Of the dead say nothing but good.’

I never witnessed Scarponi at stage starts to be anything but cheerful, fun and fully engaged with the fans for autographs and pictures – the Tifosi loved him, he always raised one of the biggest cheers at the sign on. 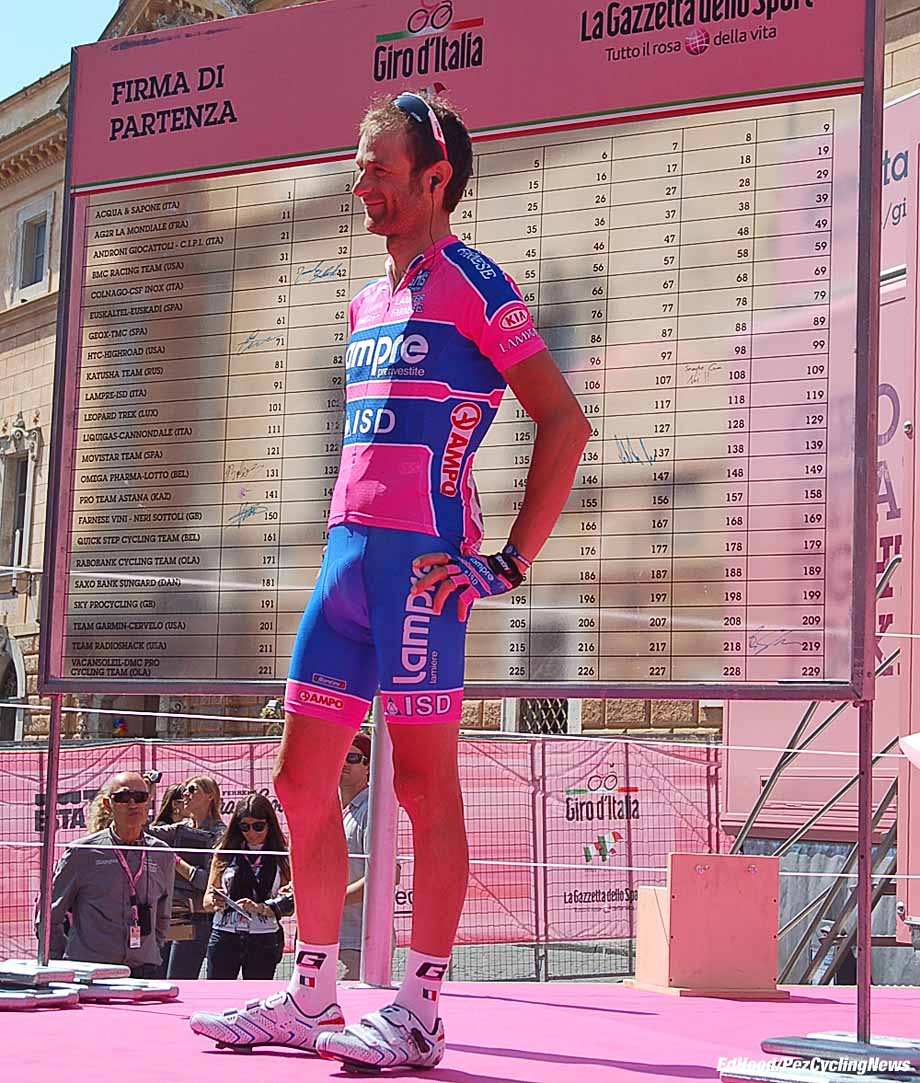 And no matter how tough the day had been when the inevitable microphone was jammed into his face at the finish there was always a smile and an honest account of his day’s racing. 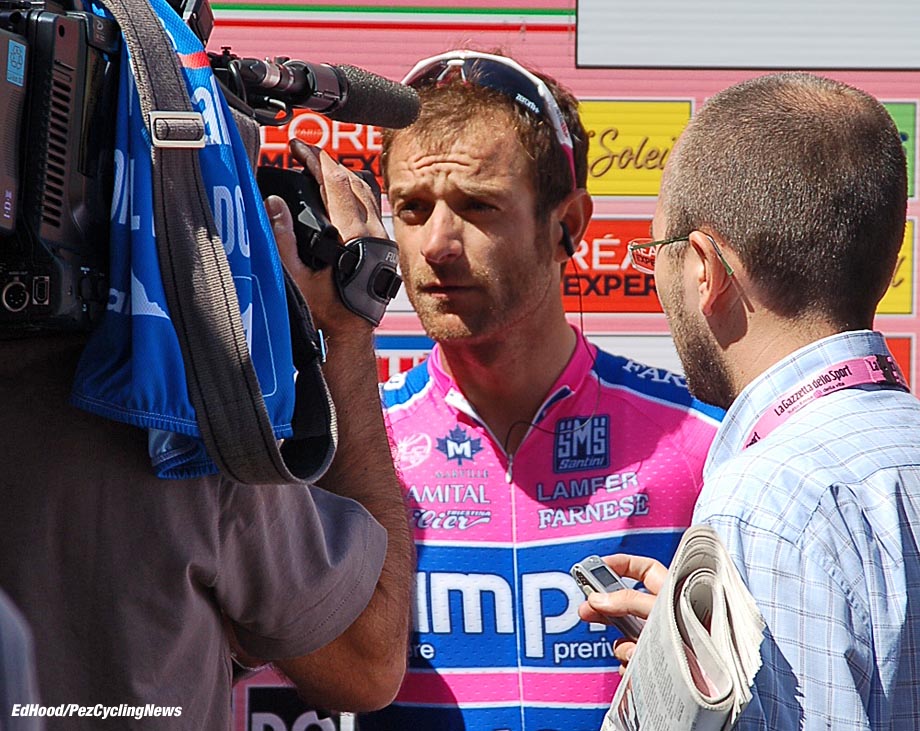 Michele Scarponi was born 25:09:79 in Jesi in Le Marche region of Italy, he started racing young and by 1997 was Italian Junior Champion in the colors of the Pieralisi club. In 1998 he joined the famous GS Zalf team which has produced the likes of Alessandro Ballan, Gianni Faresin, Daniele Pontoni and more recently, Sky’s new sensation, Gianni Moscon. The big results didn’t come quickly and it was 2001 in the colors of Site Freza that he began to find his feet with a stage win and second on GC in the highly desirable amateur/U23 Giro delle Regione – and there was a fourth place in the Trofeo Piva, another big Italian amateur/U23 classic.

Acqua & Sapone gave him his chance for season 2002 alongside the likes of Daniele Bennati and Mario Cipollini – he took a stage in the Settimana Ciclista Lombarda and very promising top 20 on GC in the Giro. The team became Domina Vacanze for 2003 and there was a stage in the Giro d’Abruzzo, another top 20 in the Giro and the Vuelta plus two strong Classic results – fourth at Liège and seventh in the Amstel. 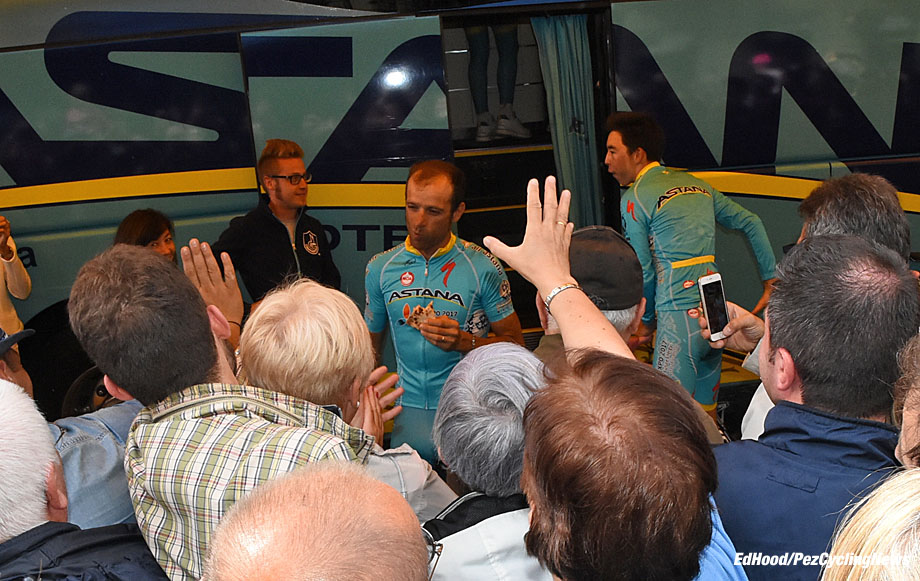 Bearing the same colors for 2004 he took a stage in the Coppi-Bartali and third on GC, a stage and the GC in the Peace Race – no longer the awe inspiring race it once was but there are no ‘easy’ pro wins, two stages and the GC in the Lombarda, rode the Tour and picked up another two solid Classic finishes with seventh at Liège and fourth in the Amstel.

Spain and Liberty Seguros was ‘home’ for the next two seasons, he rode the Giro and Vuelta in 2005, finishing 13th in the latter and was DNF in the Giro one year later – not the best phase of his career.
Back with Acqua & Sapone for 2007 he took a stage and the GC in Coppi-Bartali and was second on GC in the Giro del Trentino. The following season was curtailed by suspension but he was back late season for Savio and took seventh in the Giro dell’Emiliia.

His two Giro stage wins in 2009 we’ve already mentioned but he took a stage and the GC Tirreno-Adriatico that year too. Season 2010 was a strong one with a Giro stage win and fourth on GC, a Tirreno stage win and second on GC, the prologue and GC in Lombarda and second place to Philippe Gilbert in the Giro di Lombardia. 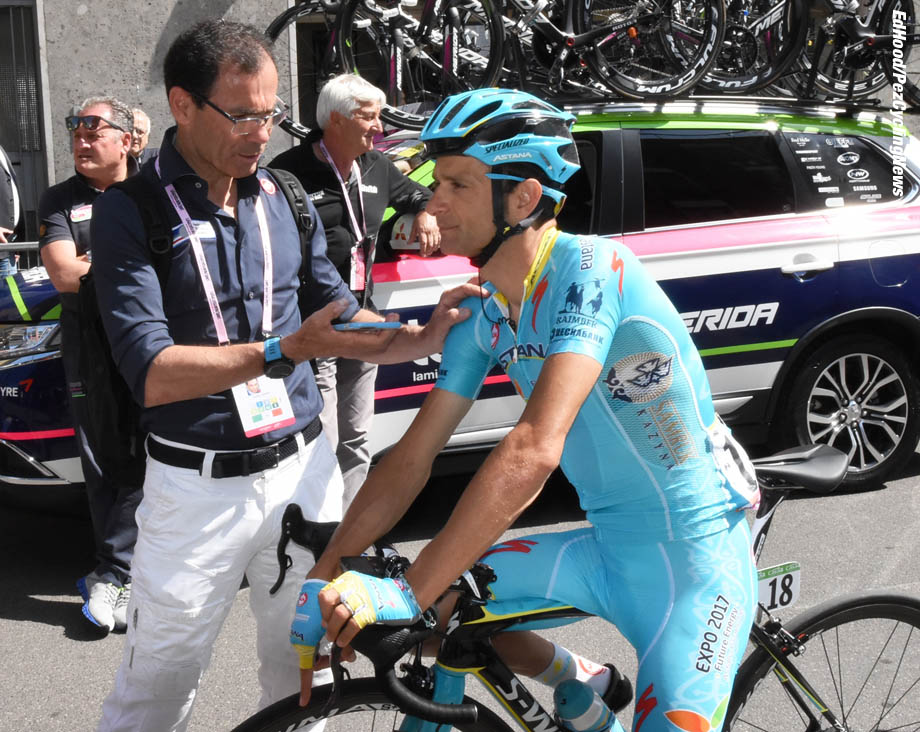 He was back in Division One with Lampre for 2011, finishing second in the Giro but being retrospectively awarded the win when the book was finally closed on Alberto Contador’s clenbuterol ‘never ending story.’
It was another strong year with a stage in Sardinia, a stage in Tirreno and third on GC, a GC win in Trentino and a GC win in the Volta Ciclista a Catalunya – again thanks to Contador’s suspension.

Season 2012 he finished fourth in the Giro, eighth at Liege and rode the Tour – to give an indication of his worth to a team, his salary for this year was 700,000 Euros. His final year with Lampre saw him win the Costa Etruschi, finish second in his National Championship behind Santamorita, fourth in the Giro, fifth in Liege and 15th in the Vuelta. 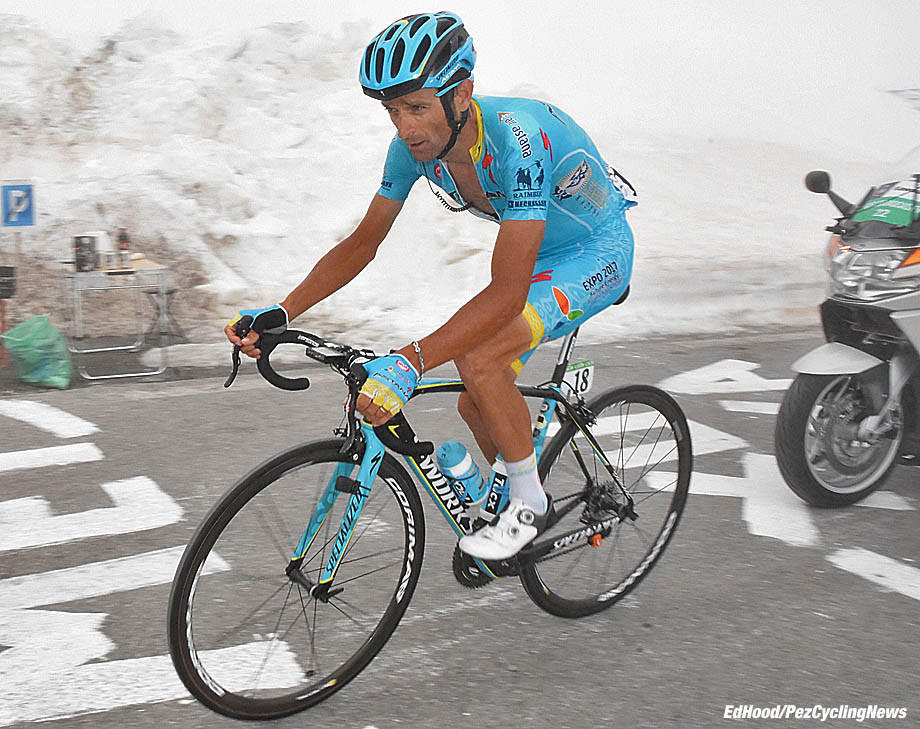 His tenure with Astana began in 2014, no longer the team leader, rather the road captain he rode the Giro and Tour, playing a big part in Vincenzo Nibali’s Tour win. In 2015 there was a team time trial win and second overall in Burgos and Tour ride. Last season there were TTT wins in Trentino and Burgos, a 16th place finish in the Giro and 11th in the Vuelta.

Ironically, his first individual win since the 2013 Costa Etruschi came just days before his death; Stage One in the Tour of the Alps – formerly Trentino. He also took fourth on GC and it was a shock to all yesterday when word came of his being fatally struck by an Iveco van on an early morning training ride just one kilometer from his home in Filottrano. The driver telling police; ‘he didn’t see’ Scarponi.

To Michele Scarponi’s wife, Anna and twin boys Giacomo and Tomamaso, his extended family, friends, fans and team mates we extend our deepest sympathies. Rest in peace, Michele we’re going to miss you. 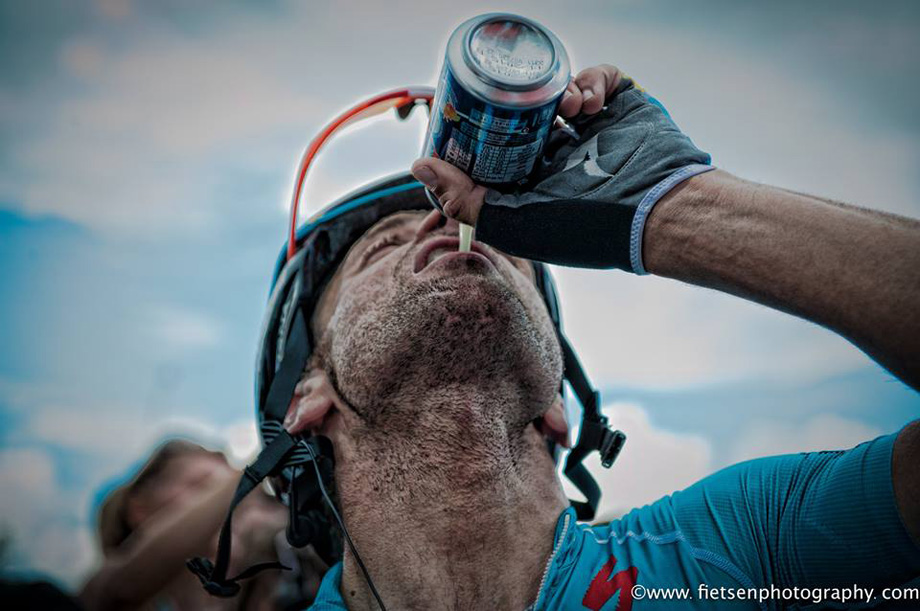