Sleeping on the job is generally regarded as a no-no, at least by most people I know. But travelling at 30-50kph in the back of a team car, day after day, can have a rather ‘dozing’ effect on even the hardiest of souls, especially during the endless hours of a stage race. But in the world of pro bike racing, even a little on-the-job shut-eye can spell disaster.

Carrying on our budding series of amazing cycling stories is this tale of woe submitted by PEZ-Fan and former Team Motorola mechanic John Gatch. 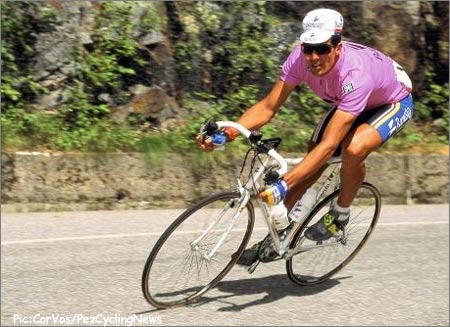 Interview With Big Mig
I enjoy your site very much. I thought you may enjoy the following story.

I did a short stint as a mechanic for the Motorola Cycling team during the summer of 1993. At the Giro d’Italia that year I did something that produced no end of ribbing from the rest of the staff. I was the new guy, 3rd mechanic, so all I was allowed to do was wash bikes, air tires, and ride in the second car.

We were somewhere down near the spur of Italy (near Bari I think) on one of those god awful, 200k +, super hot, flat stages. With Paul Sherwin (then PR man for the team) at the wheel of my car, I was just trying not to fall asleep before we got to the second feed zone – yes, the stage was that long, it had 2 feedzones.

On a long, straight stretch we followed all the other 2nd team cars past the peloton and motored down the road to the feedzone. We parked the Mercedes wagon team car at the end of a long drive leading to an ancient farmhouse. Its occupants, about 3 generations of Italian farmers were picnicking at the end of the drive. They were delighted to have us park there and even gave me my first taste of grappa. 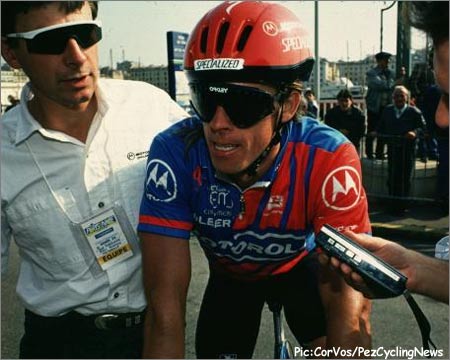 Paul Sherwen as pr man for Motorola, with Phil Anderson.

Paul wandered off to chat with some other team personnel while I readied the bags and bottles. Pretty soon the advance vehicles start to pass by and I could see the bunch lumbering towards us on the long flat road. I loaded up with 4 or 5 bags, Paul grabbed the rest and we stepped up to the side of the road. I handed mine up 1, 2, 3, 4, 5… no problem then CRASH!

Riders go down in the center of the road and the crash quickly mushrooms outward. A Banesto rider nearly runs me down and ends up in the ditch behind me. The road is completely blocked with bikes and bodies. I scan the pile and determine there are no Motorola boys, so there’s nothing for me to do here. I remember the guy who almost hit me and turn to see him pretty much handlebars down at a 45° angle wedged in the ditch. He can’t get his feet out to the pedals and is stuck.

I take pity on him, go down in the ditch, unclip his feet, hoist his bike up to the road, check the bars, spin the wheels, straighten the saddle, help him back on, then start to give him a push. I wonder which Banesto rider I am pushing. I look up to see the unmistakable profile of Miguel Indurain giving me a grin and a “grazie.”

By this time, the first team cars are getting past the crash site. My hand on Big Mig’s butt, pushing him along, I look over to see my DS, Hennie Kuiper driving beside us with a stunned look on his face that says what the #@$! are you doing??” As Paul and I get back into our car the radio is already buzzing. Hennie’s voice, “Ahhhh, How did your job interview go Johnnie? I hope Banesto pays better than us ’cause you are fired.”

At dinner that night, and pretty much for the rest of Giro, I did not hear the end of it.

No, I did not get fired, but let’s just say I didn’t work for them the next year. …Especially after the Giro di Puglia later that summer. 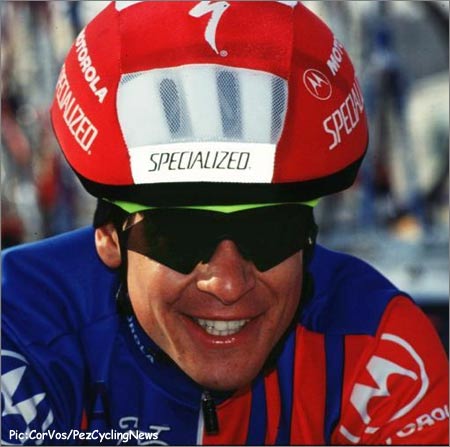 Andy Hampsten attempts to fill in that helmet with a smile.

The Plastic Bag From Hell
It was a smaller 1 week race and we had only two mechanics. One mechanic drives the truck to the next city and the other rides in the car. I was not allowed to drive the truck. We were somewhere down in mafia country storming into a town at the end of a stage. The group was going balls out setting up for a field sprint.

I am asleep in the back of the car… I wake up as the car skids to a stop and Hennie says, “There is Andy.” I think I actually wake up after I grab the wheels, open the door and run to the front of the car where Hampsten is standing next to his bike.

Now normally I would have… should have… taken Andy’s spare bike off the car and send him back on his way, but I was asleep you know and not really thinking clearly. So there I am with the wheels trying to figure out which of his tires is flat. They both look normal. Andy is screaming at me. Yes, Andy Hamsten can yell… and swear (he did later apologize).

I felt terrible. I’d made one of the most mild mannered people I know lose his temper and yell. I asked him, “What is wrong with your bike?” He screams, “Get the F*#!ing plastic bag out of my freewheel!” At this point I should have gone back to the car, gotten his spare bike, and pushed him on his way. The group is gone, way out of site, the rest of the caravan was speeding by.

I remove the rear wheel, but the bag was totally wrapped around the rear derailleur. I slammed in the new wheel, he clipped in and I gave him a push. With the first pedal turn the remnants of the bag came off the derailleur and into the cassette, the pedals spin, the chain does not engage the cog.

AHHHHHHHHHH!!!!! Now Hennie is out of the car and yelling. Teammates Kai Hundermark, Michelle Dernise, and (I think) Norm Alvis actually doubled back on the course and came back to Andy to see what was going on. It’s like an out of body experience for me. Now I am really far away from the car since I’ve pushed Andy a little ways, but I finally do what I should have done in the first place and go back and get his spare bike and send him off. I know only like 2 – 3 minutes passed, but it seemed like a lifetime.

Next time, how I almost ran over an entire family in a field while reading the GC to Steve Bauer who was in the break. The road went left, I went straight…

I probably have some photos from that summer, but they are in a box in the attic. Pre-digital you know.

PS — I am meeting with the Tour of America Race Director, Richard Dunn, here in Cincinnati tomorrow. Should be interesting. I’ll give a report on my blog or podcast. Stay tuned.

Check out more from John at www.twojohnspodcast.com

Gotta Story?
If you’ve got a story, comment or opinion you’d like to share, send us an email and we might just publish you in glorious pixelated black & white! Letters may be edited for grammar, spelling, length or just to make ‘em better.