With Québec in the midst of the Covid-19 lockdown, Giuseppe Marinoni, a seminal figure in Canadian cyclesports, is still out on his bicycle but disappointed that he had to ride alone. Most people 82 years of age would be happy to ride at all but Marinoni, the subject of a charming 2014 documentary, put in 8,000 kms cycling in 2019 and still has big plans for the future.

“Marinoni: The Fire in the Flame” is an 87 minute film by Tony Girardin that follows its subject, the then-75 year old Marinoni, around his workshop and home before going off to Italy where the entertaining curmudgeon plans to tackle the One Hour Record for his age group. For much of the film he complains to Girardin, who is present in voice throughout, about the filming, although one is never sure if he really means what he says. When talking about framebuilding, he tries to be as discouraging as possible but it is clear that as much as he grumbles he has lived for his work beyond financial considerations. We learn of his family’s history of working in metal in Rovetto, near Bergamo, in Northern Italy, but while he clearly takes pride in the more than 20,000 frames he has built, the path he took was not obvious. 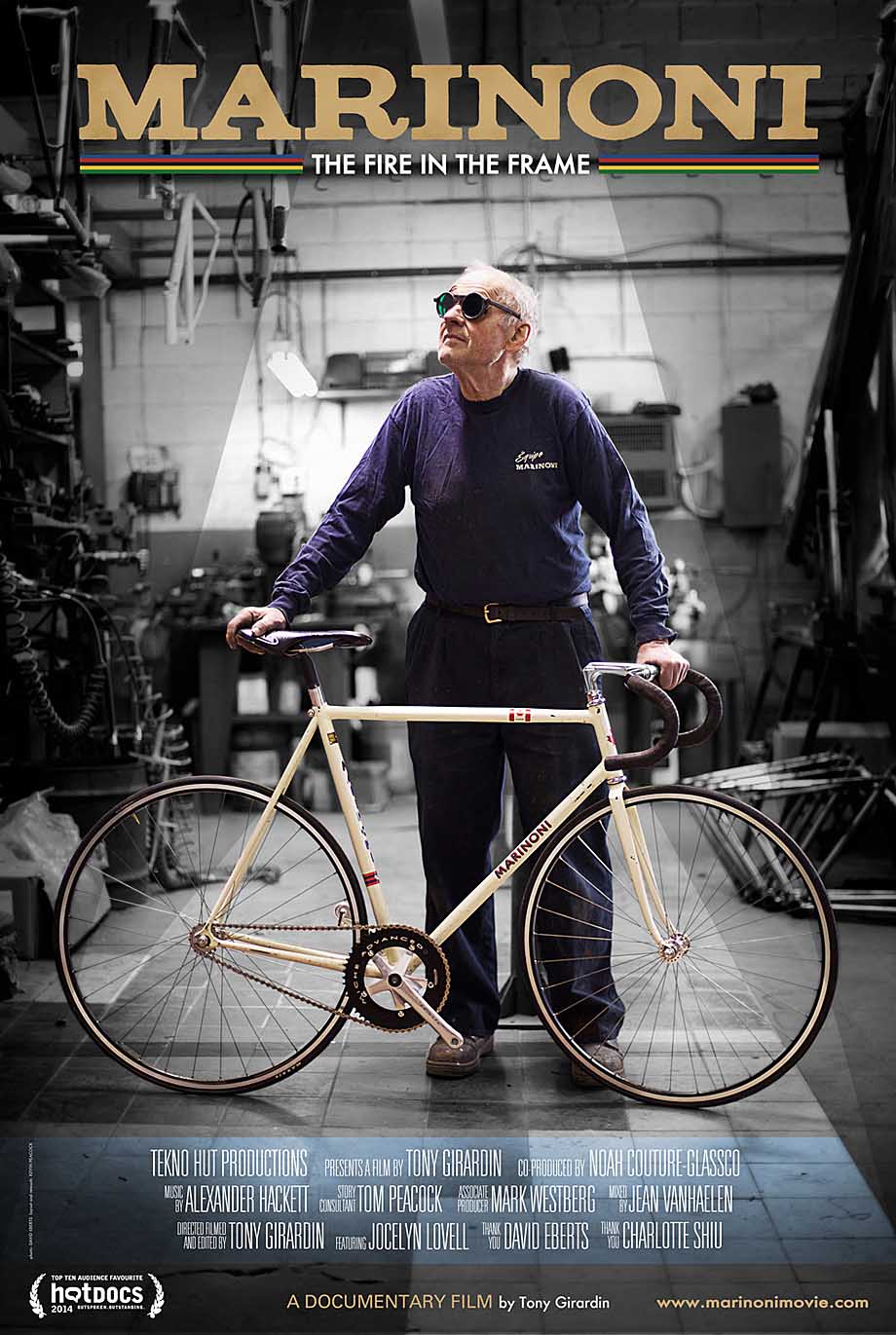 A successful regional racer in Italy, Marinoni came to Canada for the Tour du St-Laurent Cycliste, an amateur race between Montreal and Québec City held from 1953 to 1965 and arguably the biggest thing in Canadian cycling. He participated in the 1965 (and final) edition but after meeting Simone, a Québecoise with whom he recently celebrated 53 years of marriage, he decided to stay in Canada. He raced quite successfully in Canada for a few years (sponsored by a Montreal pizza restaurateur) but tried different jobs when his sports career ended. Trained as a tailor, he did that for a while along with other assorted jobs before deciding to turn his hand to framebuilding. He returned regularly to Italy and apprenticed himself—if that would be the term—to Mario Rossin, who basically told him not to ask questions but just to watch him work. This educational style, which Rossin confirms in the movie, clearly had an impact on Marinoni. When Girardin asks about learning framebuilding, Marinoni tells the filmmaker that he can learn only by watching but if he asks a stupid question Marinoni will throw him out. But then again, Marinoni says life in Italy is boring and later remarks that Italy is the most beautiful country in the world! 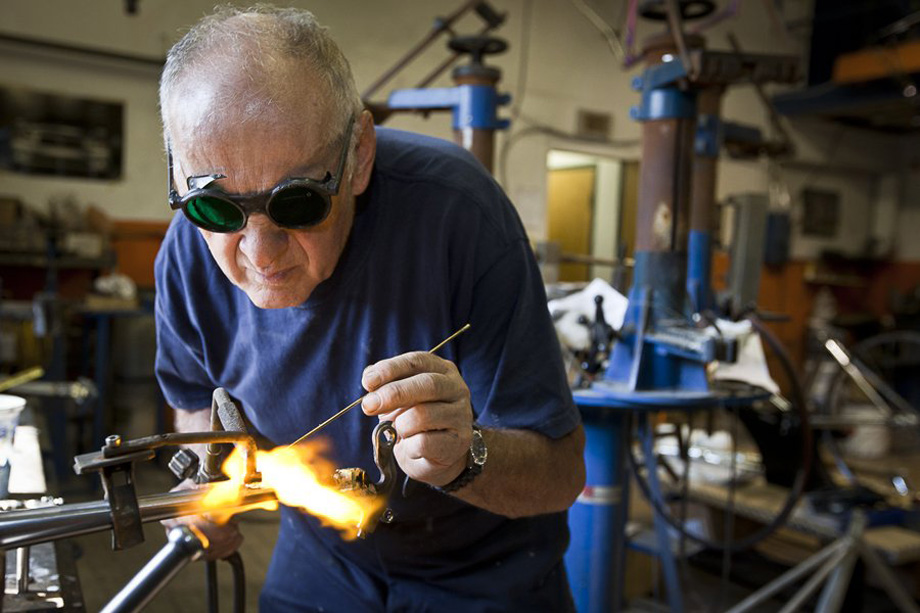 In addition to seeing Marinoni handle a brazing torch as if born to it, something decades of work will instill, we see him at leisure, feeding his chickens, admiring his plot of tomatoes and hunting for mushrooms, whose discovery makes him radiantly happy. When he returns to Italy, seemingly unhappy that Girardin is along, we see how easily he reintegrates into his hometown. He plays cars with the locals, meets up with the family, visits the graveyard and gets ready for the record attempt by participating in a local race. 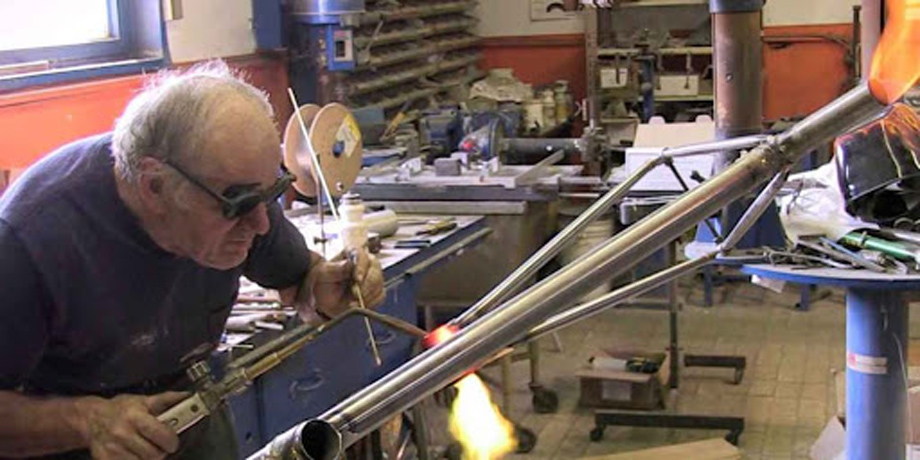 Being so involved with work, Marinoni claims not to have ridden for 20 years but decides to get into shape and go for the record. A very important part of the film is the bicycle he uses, a white track bike he built in 1978 for Canadian cycling legend Jocelyn Lovell. Lovell won some 40 national titles on track and the road,won six gold medals at the Commonwealth Games, and participated in three Olympics. At the 1978 UCI World Track Championships, he took a silver medal in the 1 km time trial in the amateur class. After his successes on the track, Lovell switched to road racing and returned the track back to Marinoni as a gesture of appreciation. It was with this bike that Marinoni, who had not seen Lovell for decades, decided to honour his racer friend from years past. Lovell’s life changed tragically in 1983 when he was struck by a dump truck while on a training ride and rendered a quadriplegic. Lovell is featured in the film and retains some of the rebellious spark for which he was noted. He passed away in 2016, two years after the film was made.

In addition to the filmmaker meeting well-spoken Ernesto Colnago and kind-of-Marinoni-grumpy Mario Rossin, there are some brief moments in “The Fire in the Frame” when people who own the Master’s frames comment about what the bikes, and Marinoni himself, mean to them. One can only smile understandingly at the owner who believes that when he rides his bike it tends to move towards other Marinonis it sees! 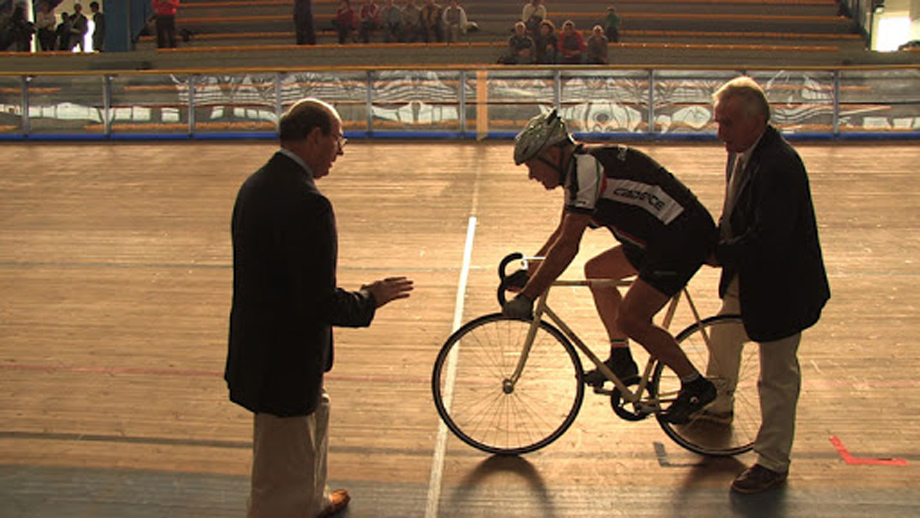 Cult objects? Perhaps it is this link with Italian craftsmanship and tradition in the cycling wasteland that has until recently been Canada that means so much. But Marinoni has had a reputation as “a builder of trust” for top riders—the bicycle Connie Carpenter used to win a gold medal at the Olympic road race in Los Angeles in 1984 was ostensibly a Raleigh but was in fact a Marinoni. At a cycling event in Germany, an older rider came up to me with some other participants and looked over my own Marinoni closely, remarking that “whoever built this knew what they were doing.”

For those wanting to see the film, it will be up to you to see what happens during the record attempt. Suffice it to say that since the movie was released in 2014, Giuseppe Marinoni took the Lovell track bike to the velodrome in Milton, Ontario where eight cyclists, in celebration of Canada’s 150th birthday in 2017, aimed to set some records for the One Hour event in different age/sex categories. There were four new Canadian records, and four World Records. Giuseppe Marinoni took the 80-84 class World Record with an amazing ride covering 39 kms. So naturally he is now considering going for the 85-90 class record in a few years! 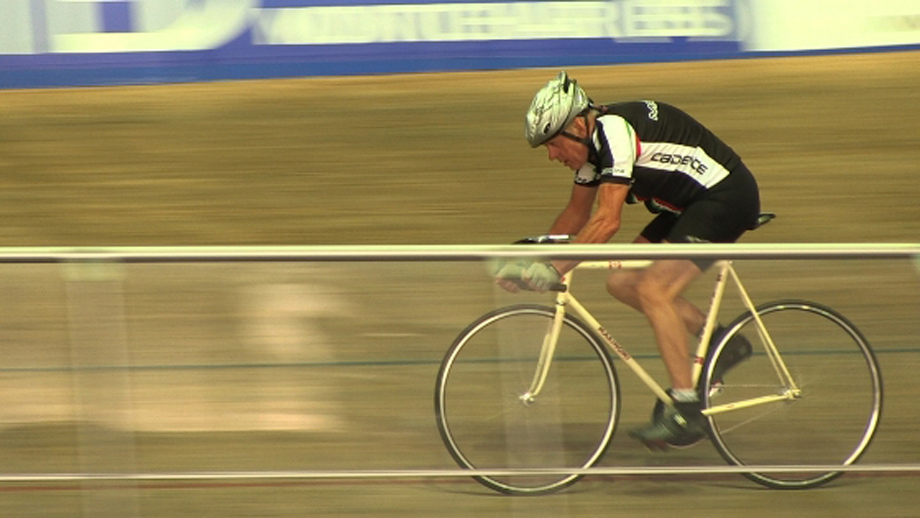 Let’s put this a bit into perspective: to my knowledge no other Hour Record holder besided Graeme Obree has ever built his own bicycle. But it should be also noted that since Jens Voigt reset the competition for the Hour Record in 2014, UCI revised rules allowed what is basically a modern pursuit track bike to be used. For his attempt in Italy before the rule change, Marinoni was basically using a bike similar to Merckx’s 1972 Hour Record bike. In the 2017 attempt he used aerobars and disc wheels but it was still the same 1978 frame with round tubes. Merckx, considered the greatest cyclist of the 20th Century by the UCI, was 27 when he rode 49.431 in his record-breaking ride at altitude. In February, GCN’s Oliver Bridgewood, a high-level British amateur rider, took a crack at Merckx’s record after considerable training, including wind tunnel testing, and using state-of-the art equipment and coaching and managed to get to 47.9 kms, so 39 kms by a semi-retired octogenarian on a 39 year old bike has to be considered an amazing accomplishment. 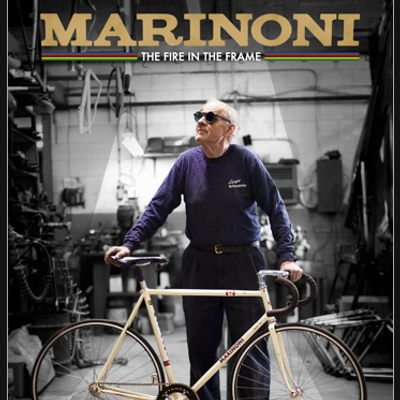