Team Jelly Belly’s neopro Jordan Cheyne signalled his arrival in the big leagues riding his first Tour of California. From star struck to bad luck, it was a crash course at cycling’s top level. Here’s a look inside Jordan’s amazing week.

Despite a gruelling five stages, ten cities, almost 1000km and 13000m of climbing, my 2016 Amgen Tour of California passed in the blink of an eye. The team presentation at Sea World in San Diego seems like that moment on stage was part of a different lifetime. It is almost as though an entire season unfolded in a week of racing. Highs and lows, hope and doubt, pride and disappointment, agony and ecstasy all washed over us in overwhelming waves. Over the past two years I have competed in dozens of Pro Racing Tour races but nothing came close to North America’s greatest race. 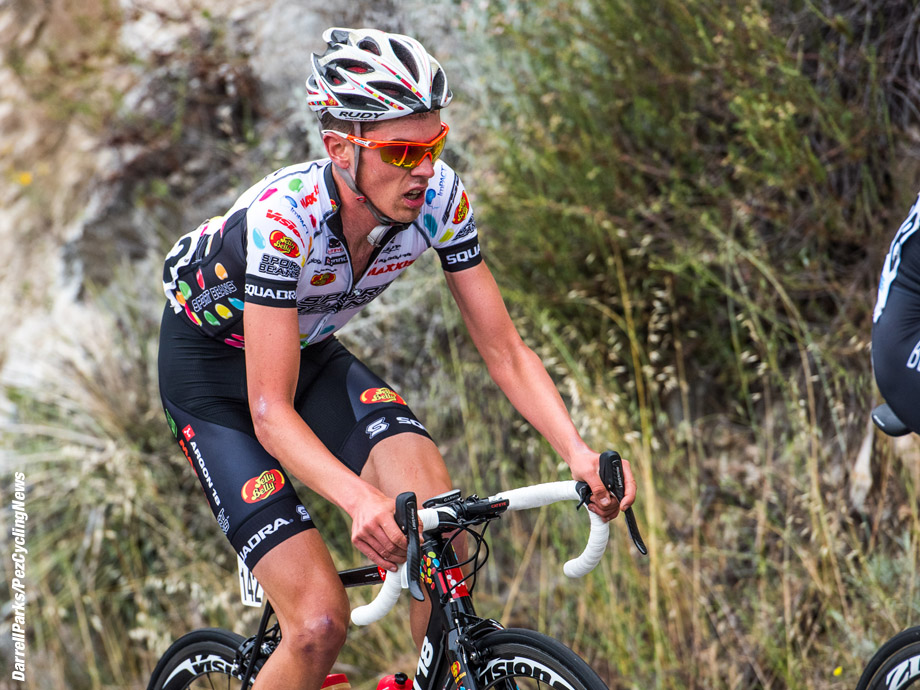 Riding High
I think I spent most of that first day sneaking glances at names on top tubes beside me and trying not to be star struck. It’s one thing to say we are all on equal footing as racers here, but another to convince yourself it is actually true. I am fairly certain Tom Boonen never watched highlight videos of me on the trainer as a kid Thanks to some gutsy and powerful breakaway riding by Michael Sheenan and Jacob Rathe, Jelly Belly had its best ever start to a Tour of California. Jacob earned the Amgen Breakaway from Cancer Most Courageous Rider Jersey and Mikey scored enough time bonuses to end the stage in 3rd overall.

I pushed any celebrity sentiment to the side on Stage 2 and attacked early on the 15 km climb to Angeles Crest outside Pasedena. Over the next horrendously difficult 40 minutes I floated off the front in a group of 20 including a few World Tour aces looking to steal a march in the overall. I dug in and followed accelerations from guys like Tiago Mahcado (Katusha) and Peter Kannaugh (Sky) as the road ground upward. In the end the peloton sensed the danger of such a large group and we were swept up before a smaller breakaway was allowed to roll. I missed the move and earned myself some sore legs, but I was still proud of my first bit of aggression in the race.

Disaster Strikes
Over the next 48 hours the team had one of its strongest ever performances on Stage 3 followed by a whiplash reversal of fortunes on the way to Laguna Seca raceway on Stage 4. On the Queen Stage finish up Gibraltar mountain Lachlan boldly attacked his way to a seventh place finish, within striking distance of the race lead. A little less than 200km later, I somersaulted over top of our team leader after Lachlan’s front tire blew out threw him to the pavement.

We were at the foot of the day’s decisive finishing climb and the situation was immediately dire. We remounted to chase and began to gain ground on the peloton. However it was quickly apparent that Lachlan was hurt and he began to struggle. The adrenaline ebbed and the select lead group faded into the distance. We rode in dejected silence past thousands of cheering fans into one of the world’s most famous racetracks, Sagan already taking his flowers atop the winner’s podium.

It was a dark day but it also showcased one of my favourite qualities of this group. That night you could hear one noise above anything else in the hanger-sized dining hall. It was the Jelly Belly table, Lachlan included, raucously laughing at one of the thousand stupid jokes we had come up with. Even on our worst day, it was still just a bike race and we managed to get some fun out of it. 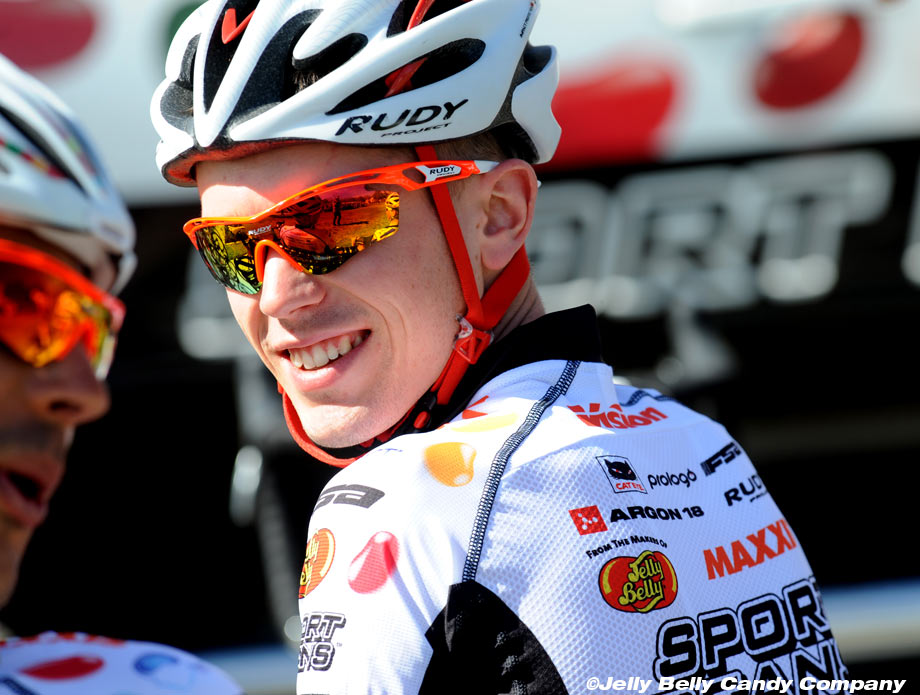 Trying
I think I could devote an entire article solely to the epic that was stage 5. The race began in the windy orchards of Lodi, climbing over 4000m through several mountains passes and finally finished in the surreal natural beauty of Lake Tahoe 215km later. While Jacob ripped and tore his way into the day’s breakaway, Lachlan succumbed to concussion symptoms from the previous day’s crash and climbed off. Emotions ran high as the entire peloton felt the strain of relentless elevation gain over the course of the first 4 hours of racing.

As the pace wound up in the closing kilometers, I was surprised to find my legs feeling fairly strong as we ripped over the alpine roads. As we entered the grinding, 1.5km rise to the finish, a top 5 was still on offer behind the breakaway winners. I gave it some gas on the first pitch and found myself off the front with a narrow gap. I looked back and tentatively pushed onwards, never really committing to the idea that I could hold off Team BMC in full fight. That hesitation cost me and I was swept up with 200m to the line. It was a bittersweet feeling knowing I had the power but perhaps not the composure for a result. Despite his devastating day Lachlan imparted some wisdom that summed up both my failed attack and my week as a whole: “No man, it’s all good. Trying is the first step”. Those words felt exactly right somehow and they rattled around my tired brain on repeat as we entered the tour’s decisive final weekend. 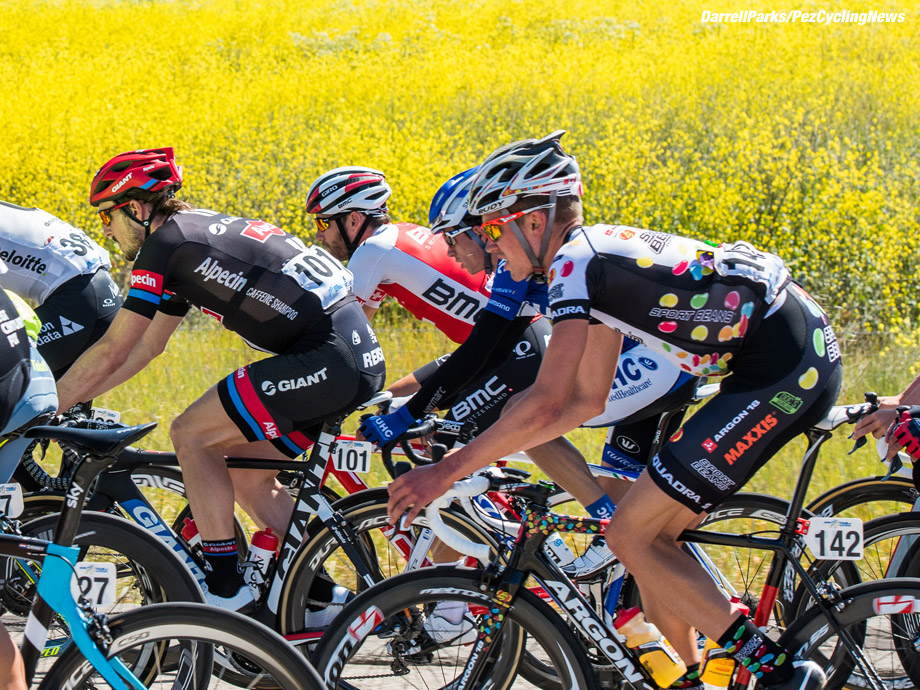 Bad Luck
After six hours of driving and a sluggish 26-minute time trial in Folsom on day 6, I was ready to try again on the brutal stage 7 parcours around Santa Rosa. Early on, I found my legs surprisingly spry and began following attacks and vying for the coveted breakaway. I found myself in the top 10 riders, directly behind one Peter Sagan, as the splintering peloton dipped around a downhill curve 20km into the race. And then I found myself on the ground. My front wheel inexplicably slid out and I came straight down on the left side of my body and shattered my carbon handlebars as I crashed down. The swelling came on so quickly that I struggled to even bend my left leg and watched helplessly as the race roared away. It took me 60 more kilometers to succumb to the broom wagon, but I felt much sooner: my Tour of California was over.

I spent Sunday’s final stage in finish line VIP tent drinking free wine and groggily reflecting on the week that had been. What exactly did I learn? What had the race meant for me? I didn’t sift any great answers out the swell of emotions I felt and I haven’t done much better in the days since. I want more, that I know. I am not going to be content with saying “I was on TV with Peter Sagan” nor am I satisfied with a couple of strong finishes in the lead group. My best is better than that and I want to show it. I know it will take time and experience to make that happen.

After a week with the world’s best, I think I am starting to grasp the intangible things that make such a big difference at cycling’s top level. I learned valuable lessons about which wheels to follow, efforts to avoid, places to be, ways to recover and even which thoughts to think. However, perhaps more importantly than any of that, I learned you have to be willing throw away any insecurity and try your absolute hardest even for a chance at a result. Success at the top level will take a combination of legs, savvy, luck and a dozen other things but there is only one place to start. Trying is the first step. 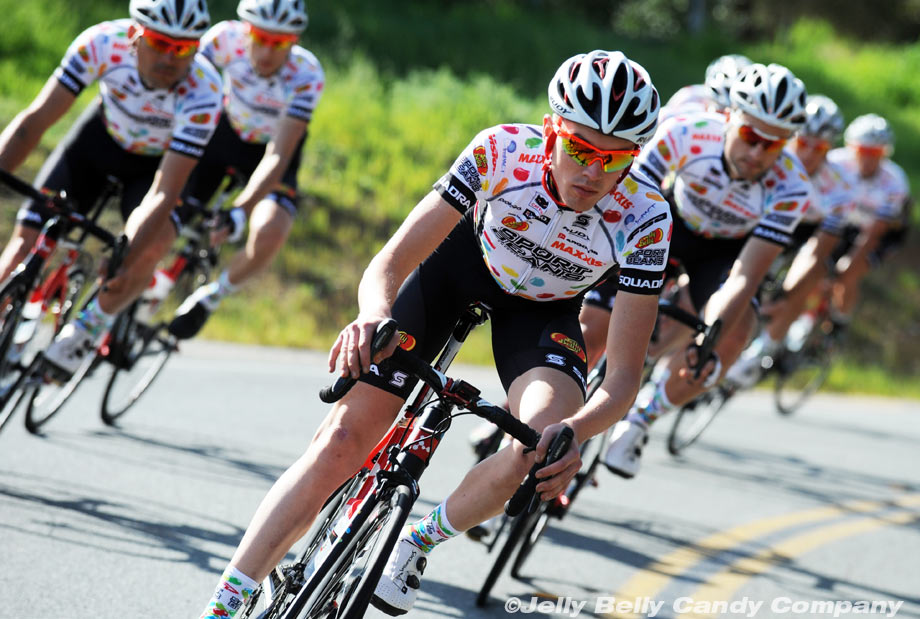