The US national calendar gets into full swing at the always sold out Redlands Bicycling Classic – and for neo pro Jordan Cheyne of the Jelly Belly p/b Maxxis team, it was his first time racing for a team win – until it all changed on the last stage.

Over its 32 year existence the Redlands Bicycle Classic has become one of the most anticipated races on the domestic calendar. In spirit it’s a humble, community run event with a focus on athlete development and the most welcoming host housing network around. However, as the first big event on the national calendar the RBC exudes a fierce competitive aura and desperation for early results. 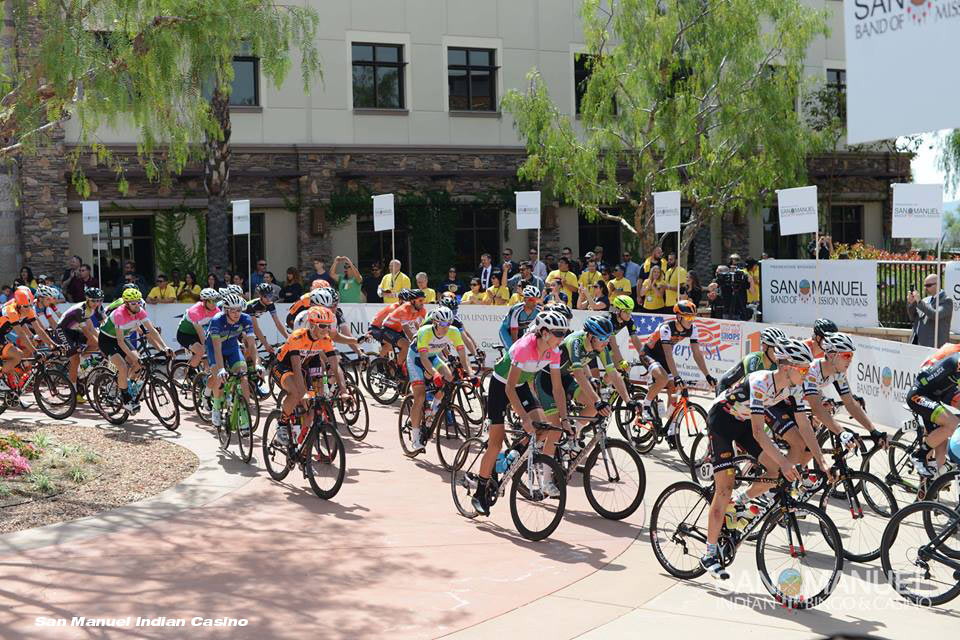 Every aspiring amateur wants in for a swing at a breakthrough result. And yet dozens of riders are turned away each year as the race easily fills out its 200-rider field limit. The feeling doesn’t change in the pro ranks either. I think our goal at Jelly Belly p/b Maxxis was the same as any professional team: come out of the gates hard and make a mark on 2016.

The Jelly Belly team that arrived in Redlands was strong and deep with a potential winner for each of the five demanding stages. After helping the team to a podium spot in 2015, super-talent Lachlan Morton was selected as General Classification leader. 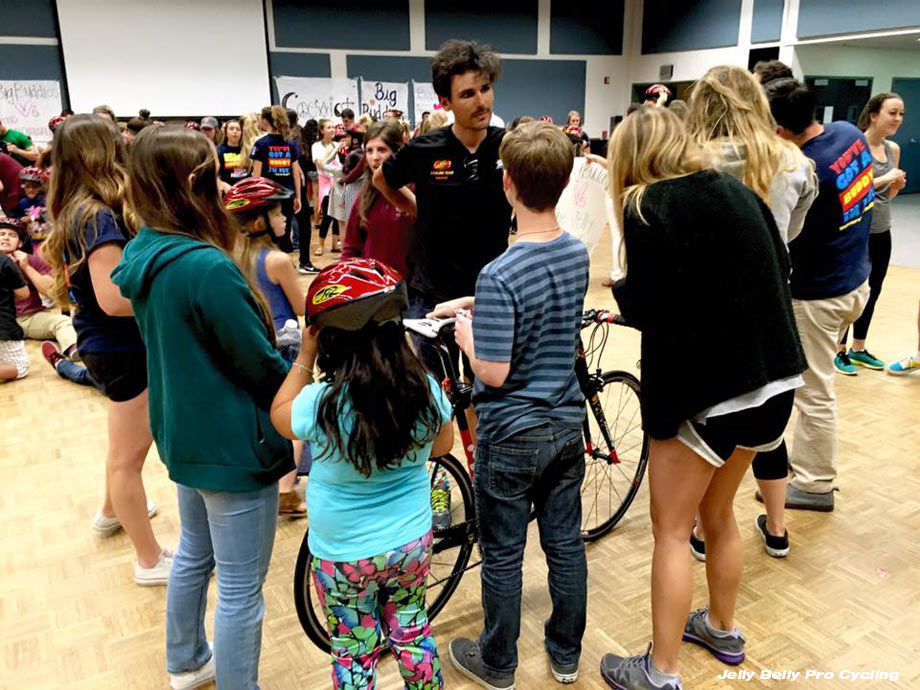 Redlands is a great parcours for me as well but my personal aspirations took an early hit the Saturday before the race. Only 40km into the notoriously dangerous San Dimas Road Race, I touched wheels with another rider and came down hard on the dirt shoulder. It wasn’t that painful at first but over the days leading up to Redlands the deep road rash seemed intractable and soreness crept in.

I waged a fairly intense mental battle to stay positive and not sell my injured self short ahead of such an important race. I have crumbled in such circumstances in the past but with a lot of effort I pulled through. When we rolled off the start line onto the smoldering hot Stage 1 Highland Circuit, I was fully committed to the job and fired up. 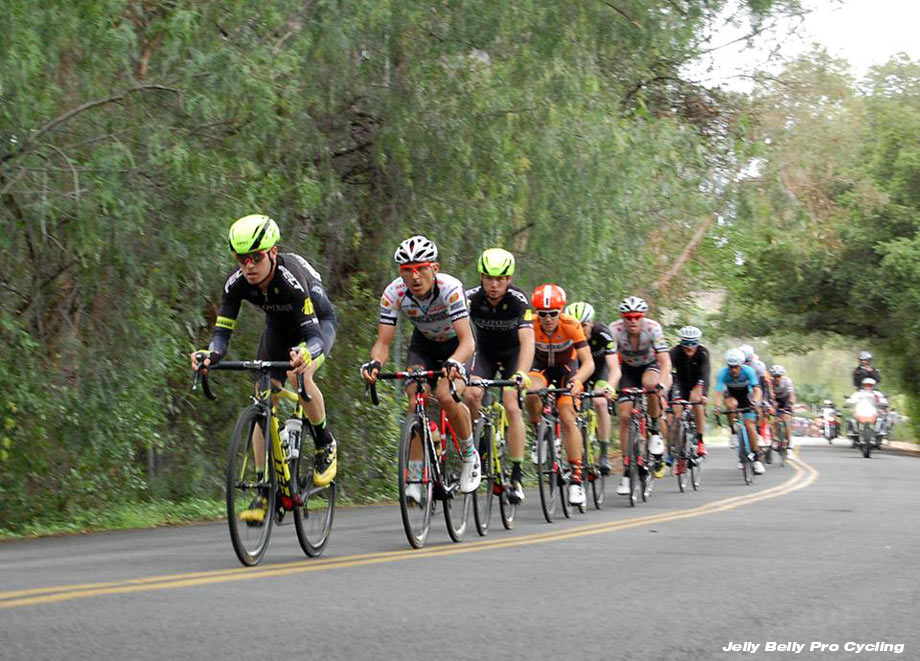 Part of what makes Redlands special is that each stage provides a unique opportunity for a certain type of rider to excel. Day one is a demanding circuit culminating with a searing 45-second uphill finish. Our strongman Jacob Rathe pulled out a powerful sprint for 4th and Lachlan began his GC ambitions in 9th place.

The next day’s Oak Glen stage was one for the climbers and Lachlan topped off a big team effort with 2nd place. I gave myself a solid pep talk before the soggy 11km Stage 3 time trial. It was a stage I wanted to win and I went out hard for a result on the opening climbs of the course. Unfortunately, my sore legs were missing the same 5 or 10% they had all week and I flamed out halfway through my effort. On the day, it seemed none of us found the right rhythm on the up and down course and Lachlan slipped slightly in GC to 3rd place at 13 seconds. 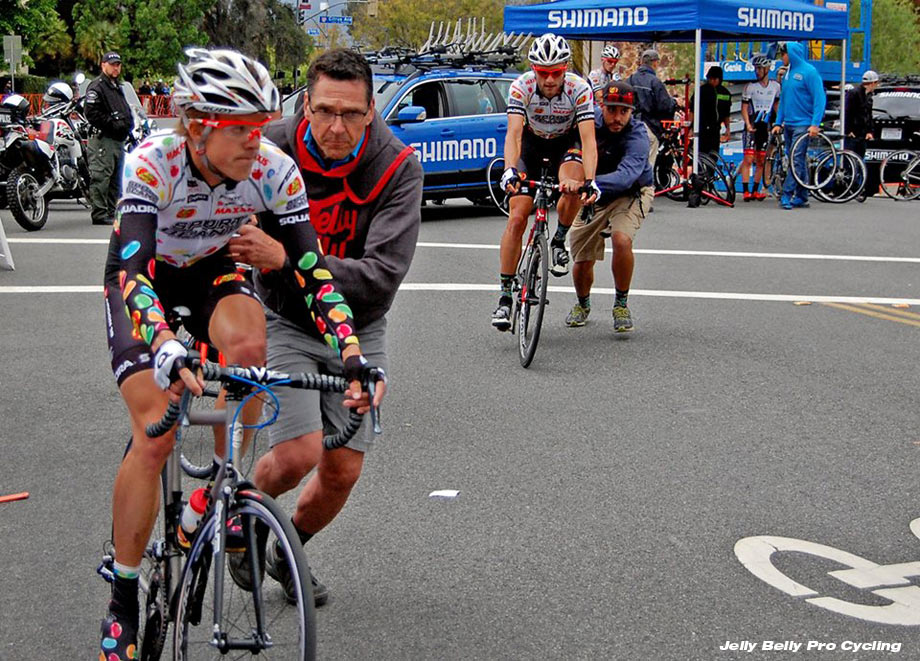 The team’s collective anxiety was palpable as we stared down the barrel of a rainy forecast for Saturday’s 9-corner, 50kmh downtown criterium. Despite the impending danger it was Sunday’s iconic Sunset Loop Circuit race that was playing through my head on repeat. It always comes down to Sunset. The hills are gruelling, the course is relentlessly technical, the legs are tired and the mind is met with constant tactical challenges. It’s a stage you can think about for days but one where a few decisive moments can make or break your entire week or racing.

The rain held off for the crit and despite a few spectacular collisions, the status quo was mostly maintained. Lachlan was still only 13 seconds behind Columbian phenom Janier Acevedo and the plan for Sunset was a full on attack. We sent riders up the road early and often in an effort to drain Acevedo’s Jamis team of chasers and make way for a decisive attack. We attacked, applied pressure and eventually Jamis wilted under the burden of constant pace making. It all went perfectly with one exception. And he was a big exception. 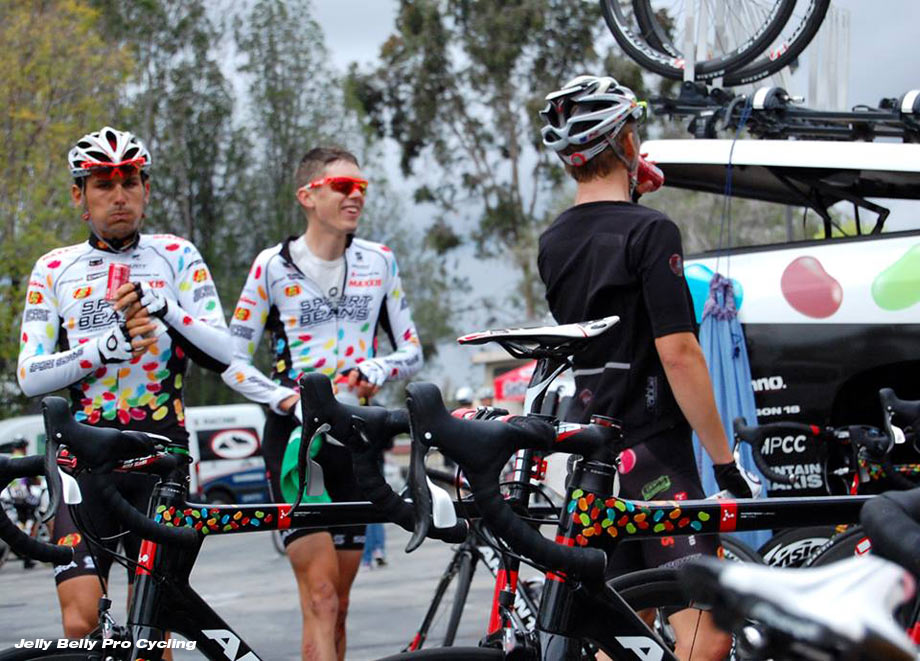 Amidst the constant shuffling of attacks, second place GC rider, Matteo Dal-Cin deftly infiltrated the day’s breakaway and pushed out a sizable gap. While we threw body shots at Jamis, Matteo and the Canadian Silber team wound up for a knock out blow. Our plan was KO’d before we could think about responding and Matteo’s breakaway rolled to the finish over 2 minutes ahead.

The feeling in the race parking lot was totally novel to me. I had done my job and so had all of the guys sitting beside me. We were sweaty, dejected and physically empty. It had been the strongest team effort I have been apart of but there was no happy ending to the story. The race had passed us by and our best efforts led us in the wrong direction.

There wasn’t too much analysis to console us either, just the simple truth that we should have played it differently and we were beaten well. For me, I still learned some important things. Racing all week beside Lachlan I started to find a balance of calm energy conservation and gutsy determination when the time is right. I also got a feel for what it is like to race for the win rather than just racing for my personal best as I usually did in the amateur ranks.

Finally, I learned a big lesson in competitive drive from my friend Matteo who I have been racing with since before I shaved my legs. Matteo has done a lot to transform himself into an all-around powerhouse but one thing has remained constant. He sets ambitious goals and then goes after them full stop, no reservations. We could all use more of that.

And now with big races like Tour of the Gila and Amgen Tour of California on the horizon, there a plenty of big goals to chase, I’m not planning on holding anything back.