Londoners got a taste from the ‘hors-d’oeuvre’ menu of cycling on Saturday night, experiencing the fantastic atmosphere that the upcoming Tour de France will produce when they turned up in the thousands to witness the first ever Smithfield Nocturne night-time pro criterium.

It was a high octane evening of Bike culture culminating in an Elite pro criterium. The event was based in and around the famous meat market and the combination of bars, clubs & restaurants that surround it ensured that the crowds were huge, lining the entire 900 metre circuit 3-4 deep at times. 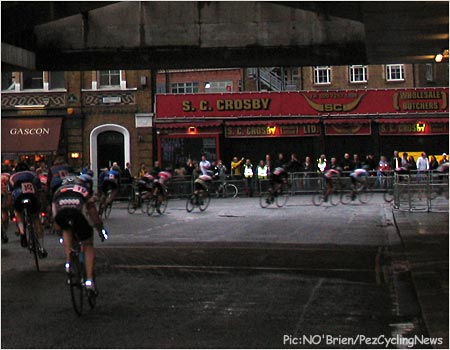 The tight twisting circuit swung through parts of the Market Buildings for a bit of respite from the rain.

Londoners are coming over all ‘allo ‘allo – French with the arrival of Le Tour in 2 weeks….

Probably the most intriguing race of the night was the folding bike commuter race which had the riders starting ‘Le Mans’ style running down the finishing straight to their bikes – building them up and then tearing off fully suited up in pinstripes and lycra – an absolutely priceless moment for all who witnessed it.

What can you say about a shot like this… if this doesn’t kick start a few fashions in the peloton then nothing will.

… and it wasn’t all about having fun, these guys in the Commuter event were serious and there was a race to be won in true British style with a stiff upper lip…

Another highlight for many was the exceedingly quick appearance (and even faster disappearance) of Saunier Duval-Prodir’s David Millar , who although rumoured to be on the start sheet for the pro race must have been delighted he wasn’t (due to rushing to catch a plane to Eindhoven, for the Pro Tour Team Time Trial) when the heavens opened up just before the start. He managed to present the winner of the support race with his bubbly and confirmed to the crowd his prologue ambitions having recced the course that morning.

…but not before we clocked those stunning ‘crocs’, Cipo would have been proud in his heyday – from a fully co-ordinating outfit angle, they would work so well with a certain yellow jersey.

The Pro race was started in torrential rain which you might imagine might dampen the crowds’ enthusiasm a tad, but in reality not one bit. Luckily the market’s perimeter has a glass canopy surrounding it and most were able to squeeze under this to witness an absolutely outstanding start by Kiwi Warwick Spence who simply road away from the peloton on account of superb cornering skills, on this by now very wet and technical circuit. It took at least 10 laps for the rest of the riders to master the racing line and get a chase organized, by which time Spence had built up a lead of around 30 seconds and the crowd had gone ballistic.

The stars of the night are introduced to the crowd with the Historic Smithfield Market as a back Drop. The man that ripped the race to pieces in the early stages Warwick Spence (left) looks focused alongside Rob Hayles.

He held this for around 20 minutes with some of the UK’s top riders unable to make an impact including multi Olympic medalist Rob Hayles, who eventually pulled out. With lap times around 1min 40 there was a feeling that Spence could even lap the peloton – but sadly reality set in as the PCA and Rapha Condor teams got organised, eventually catching the solo break with about half an hour to go.

However the damage was done and the field had been shreaded with only 10 riders from the chase left in contention. Attacks came thick and fast over the final laps but no one could get the gap until on the bell lap, newly crowned British criterium champ James McCallum tore away with a 50 metre lead on the rest. The crowd in the homestraight waited in anticapation to see if he could do it. All eyes fell on the final corner to witness a super on-form McCallum narrowly hold off Rapha’s Dean Downing for the win on the line, a superb last lap by the Scotsman.

This was a great end to a great evening and I reckon that with the crowds like they had it won’t be long before this becomes a regular London sporting Landmark.