We love our local bike shop here at PEZ but sometimes, just once in a while you might come across a shop that is so different, unique and just plain cool that it makes your LBS look boring. It was from here that our new series of ‘Not Your Average Bike Shop’ was born with first up being Velo Classique from Virginia USA.

Are you looking for a bike to ride L’Eroica? Was “Breaking Away” your inspiration for cycling? Did you get into racing during the “steel is real” era of the 70s and 80s? Maybe you’re a retro-curmudgeon who eschews all things carbon fiber? Or are you someone who is just passionate about and simply appreciates bicycles? If so, then Velo Classique in Purcellville, VA (about 40 miles west of Washington, DC) is a must visit shop that specializes in vintage and classically styled bicycles, parts, and accessories. 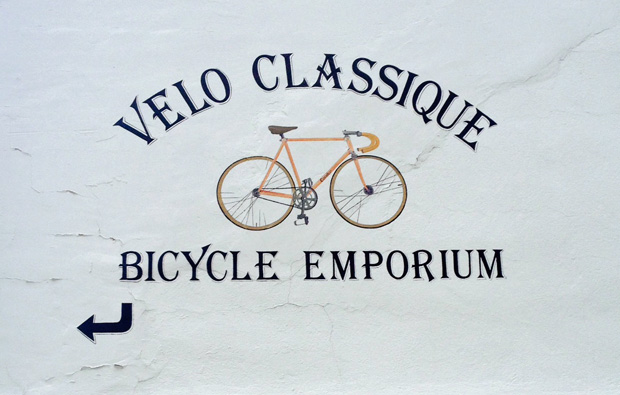 How did you find it?
My cycling buddy, Sam Bishop, discovered it because he was looking for NFS lube and Velo Classique was the only place in the area that sold it.

How long have you been going there?
We – me, my wife, Karen (who works for a local bicycle shop chain, Revolution Cycles), and daughter, Marin – happened upon Velo Classique while out in Purcellville to pick apples at Crooked Run Orchard in early October this year. After lunch at Magnolia’s at the Mill, we wandered over to Velo Classique, looked around at all the great bikes and stuff, and got to know the owner, Wayne Bingham. Turns out that it is indeed a small world. Wayne’s wife, M.J., raced for a team/club that I founded (but after I dropped out of racing and the club in the mid-90s), Unione Sportiva Coppi’s (now Squadra Coppi). 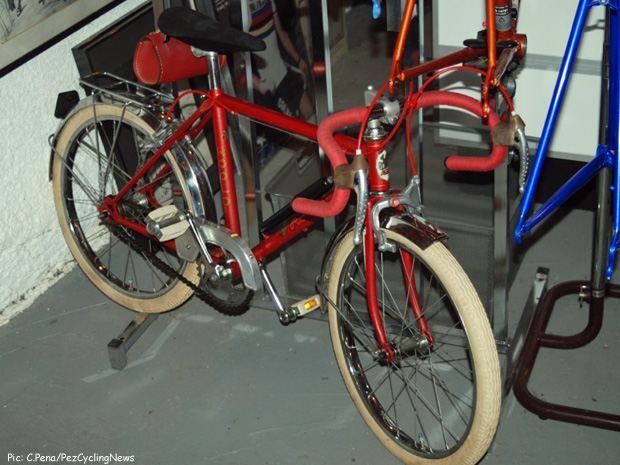 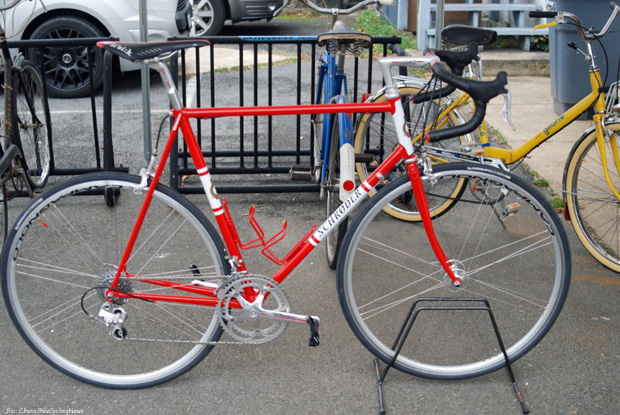 and brands that you won’t see elsewhere too. 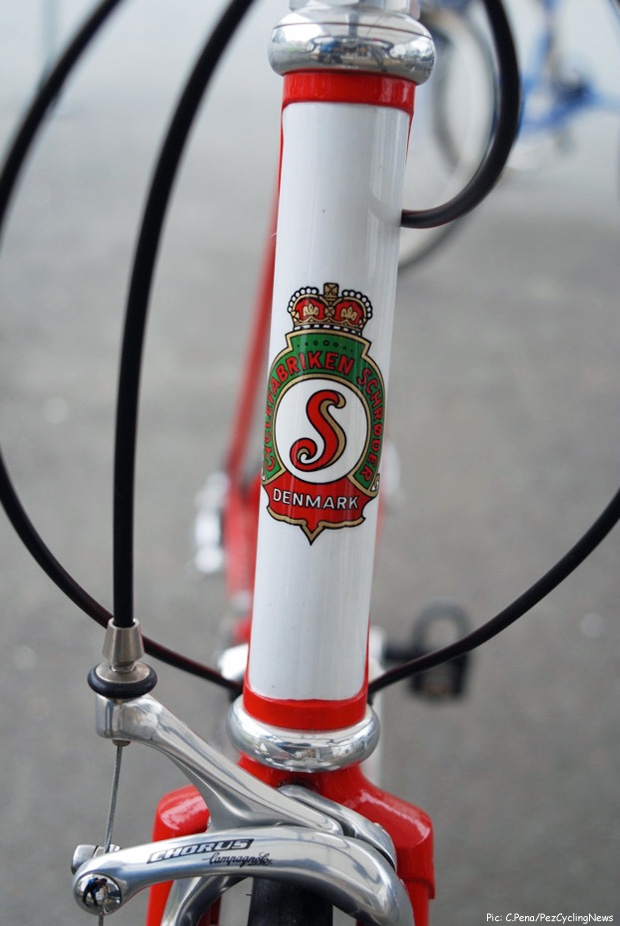 What makes it different from other shops?
All the different bikes. Unlike your typical local bike shop that is brand-based, Velo Classique is about bicycles and not about brands. So there are all different kinds of bicycles in the shop. Some of the names will be familiar to a lot of people, but others are more esoteric: Bianchi, Merckx, Colnago, De Rosa, Raleigh, Olmo, Viner, Morello, Falcon, Weigle, and Wizard, just to name a few. It’s like stepping back in time. 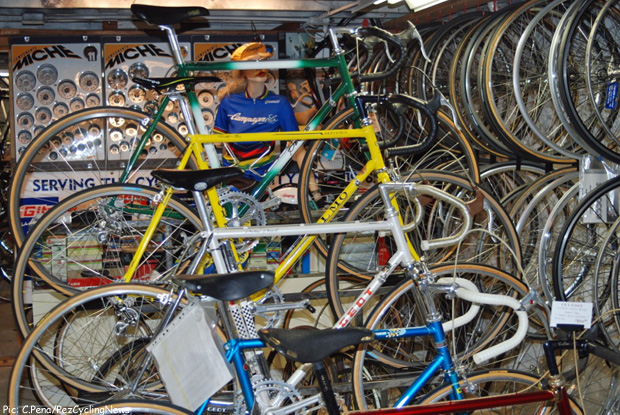 Velo Classique reminds me of the bicycle shops in San Francisco when I was a kid in the 70s (in part, because some of the bikes in the shop are the same bikes I looked at way back then). It’s small and just crammed with stuff. I’ve been to similar shops in Italy, France, and the UK. But in the U.S., shops like Velo Classique are few and far between. They say a picture is worth a thousand words and these pictures I took speak volumes about the shop.

Any interesting characters working there?
Well, the only person working there full-time is Wayne (he has two collaborators, James Rollins and John Raymond, who are there often and help out a lot) and he’s pretty interesting. 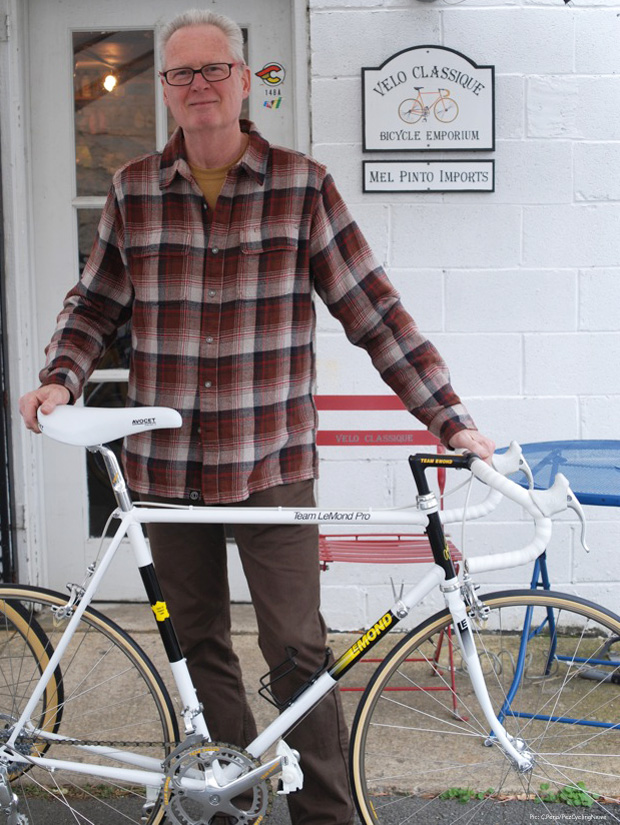 Wayne with a classic LeMond

Wayne greets you at the door and then just lets you walk around to take everything in. There’s no “hard sell” to get you to buy a bike. He lets the shop speak for itself. But if you want Wayne to talk, every bicycle in the shop has a story and Wayne is more than happy to tell you about it. It’s like a history lesson. If you’re a bicycle aficionado who appreciates the history of cycling, you could spend hours in Velo Classique talking with Wayne because he is both extremely knowledgeable and passionate about bikes and cycling.

One item in there that you’d love to own yourself?
Only one? That’s tough. The baby blue Bruce Gordon (custom builder in Petaluma, CA) is an 18 pound steel bike with all alloy parts is one I’d love to own because decked out in modern livery it would be competitive with a lot of carbon fiber bikes. 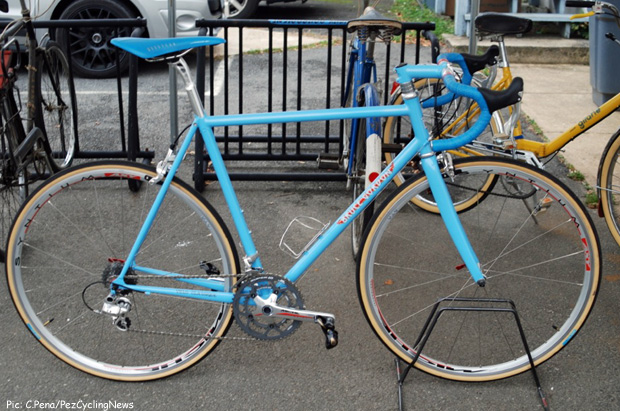 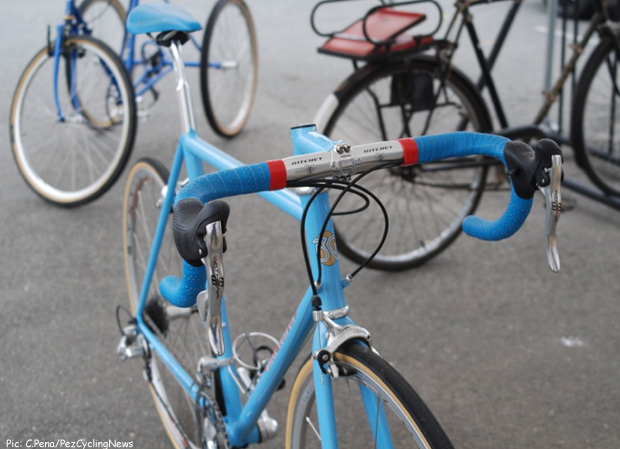 But if I had to pick just one, it would have to be the white Team LeMond Pro with 80s Campy components and original Look pedals. The frame was actually hand built by Roland Della Santa (a Reno, NV custom frame builder who built Greg LeMond’s early race bikes when he was a junior) as a “trade show” bike in 1987 for the then new LeMond Bicycles (the actual frames that were sold under the LeMond brand were factory built in Europe). Roland also built some of the bikes that Greg raced as a pro but not always with the LeMond name on them. 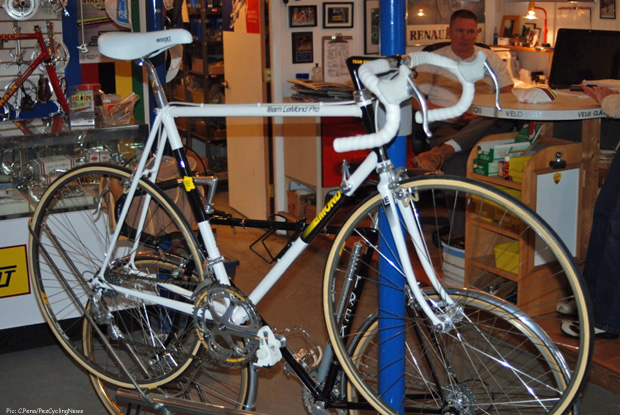 Best thing about the shop?
It’s not your typical bike shop. It’s not about trying to sell you a bike. It’s about you wanting to buy a bike that you can’t buy at your local bike shop. A bike that speaks to you. Like a Masi USSR commemorative team frame built with 3V Volumetrica oversized tubing (number 30 of only 100 built). Masi built team bikes for the Soviet team in the late 80s and early 90s (including for the 1988 Seoul Olympics and the Tour DuPont). 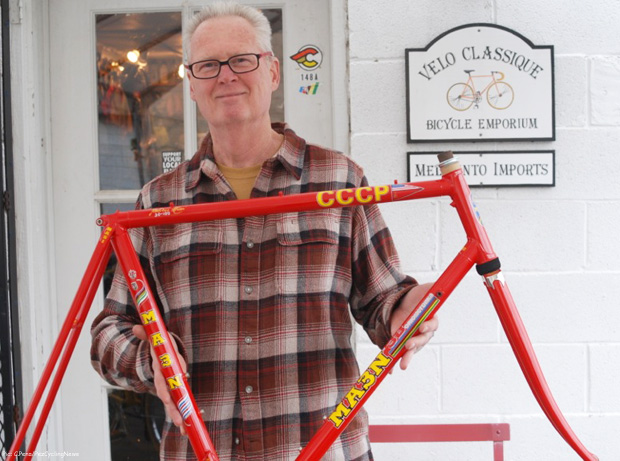 The Ma3N CCCP bike was originally built for the Soviet team but the team never used the bikes after the collapse of the Soviet Union. So Masi turned them into a limited edition run. 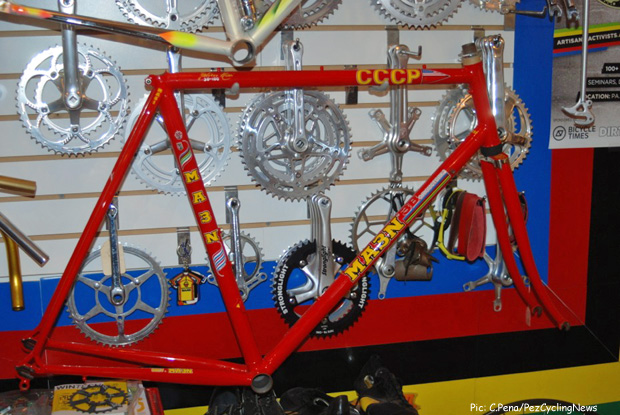 Or one of J.P. Weigle’s (custom frame builder in Connecticut) personal bikes that Wayne traded for (painted bright pink, no less). 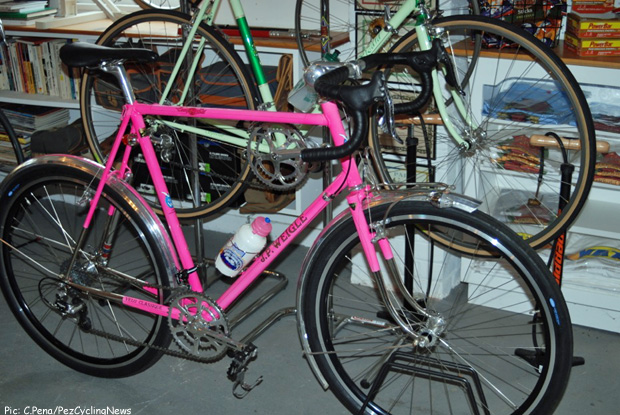 Or a sublime green 35th Anniversary Wizard (a collaboration between Brian Baylis and Mike Howard, who both left Masi to form Wizard which only built bikes for two years, 1974-75, after which Brian went on to build bikes under his own name and Mike created Medici with Gian Simonetti). 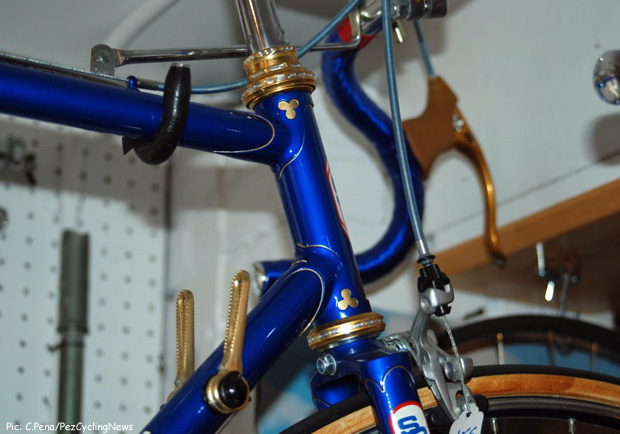 Then there’s the blue Stan Pike (considered one of the best frame builders in the UK until his passing in 1983) that’s relatively unassuming at first glance. But closer inspection reveals that it’s eye candy, with beautiful lugs and adorned with gold (but not gawdy) bits (including incredible drilled-out chainrings). Or for something completely different, a Bob Jackson (Leeds, UK) three-wheeler. 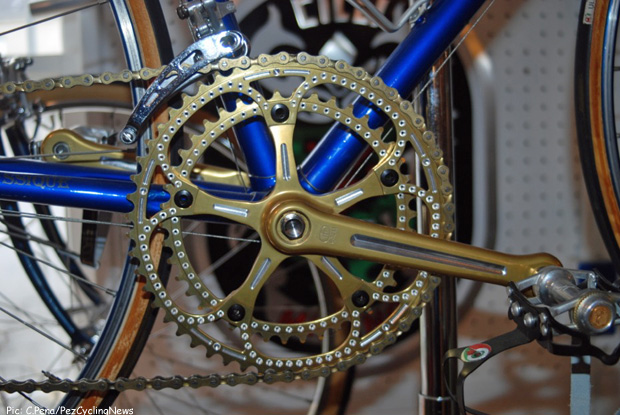 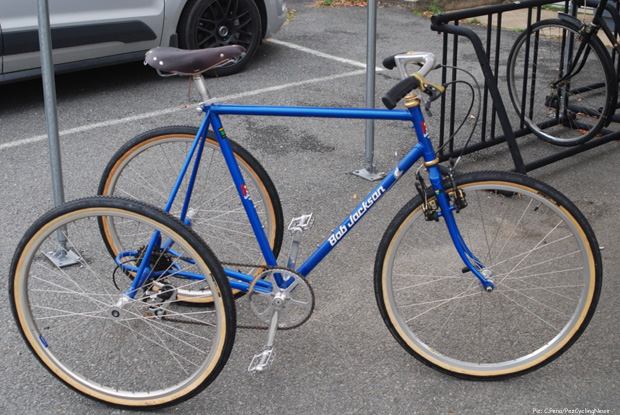 Thanks to Chuck for taking us inside this cool looking shop. You can check out Wayne at Veloclassique.com or on Facebook for more. And do you have a favorite bike shop that’s just a bit different from you average LBS? Or maybe you were on holidays one time and saw an amazing shop that you wished was your LBS? If you have some pics and a story to share with fellow Pez fans about an interesting bike shop then send them through to [email protected] and your favorite hang out could be the next PEZ, Top Shop.
Like PEZ? Why not subscribe to our weekly newsletter to receive updates and reminders on what's cool in road cycling?