O’Brien’s Water Hole has become an important part of the Wachovia USPRO Championship Race and an institution on the Manayunk Wall. Bill O’Brien, age 70, and his wife Evelyn have provided much needed relief to racers on “The Wall” over the last twenty years. Located 2/3 up The Wall on the left side this water hole is essential to the survival of the athletes competing on race day.

Bill moved to the Roxborough / Manayunk area 45 years ago and married Evelyn two years later. His surviving brother and four surviving sisters are spread out in various locations but Bill is true to his neighborhood. Their daughter Suzanne lives in Alabama with husband Scott and Bill’s five grand children. Although his daughter won’t make the race this year they have often come.

Bill is a retired maintenance worker for the Sisters of Mercy Convent in Narberth, PA.. He worked at that facility for twenty years. Evelyn worked at the same convent for twenty-three years as a switchboard operator and retired just last year.

The first US Professional Championships in 1985 was extremely hot and several riders asked the O’Brien’s to “please squirt us.” Although there existed at the time a city wide water shortage Bill told them not to worry about it and the next lap provided the much needed water. Unfortunately Bill was useless the next day since his arm was numb from holding the hose for so long. A better method was needed and he built himself a spout with four showerheads that the cyclists could then ride under.

This worked extremely well for the next several years. Racers would come up to thank him for the water. Race organizers would pick up Bill and his family for a spin around the course or lunch in one of the VIP tents. However, three years ago someone stole the elaborate four head system that was stored outside of his house. Bill was forced to improvise and created a new system from PVC. This was less expensive and easy for Bill to make. 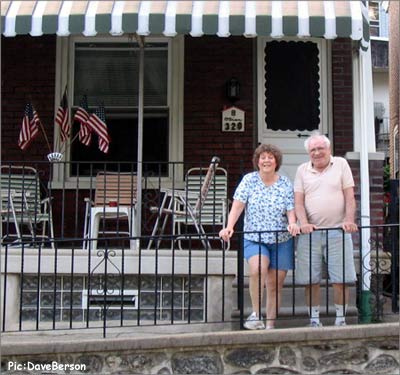 Over the last twenty years Bill’s wife Evelyn has had to work extremely hard to prepare for race day. Evelyn explains that it is “like a wedding where you plan all year and then after that day it is over.” Their daylong party requires shopping, cooking, hosting, and of course cleaning up. “The Mayor of The Wall” as Bill is often referred to as, likes to socialize race weekend while Evelyn does a fair amount of work. But, she says that it’s worth it for Bill. Politicians, cyclists, staff, radio and TV personalities have all made the rounds to their party. Lance Armstrong’s ex-wife even stopped in one year to “use the facilities.”

While Bill has never ridden up the wall himself but he has walked through his famous contraption. In past years he has been thrown under the shower in fun. Bill and his wife state that the one rule on The Wall is they just want good clean fun for the bicycle race. Bill expects to keep providing his services as long as he is needed.