Of Beans and Rice: Jittery Joe’s Guide to Being a Pro

Wednesday at the Tour de Georgia featured a long ride with Micah Rice, general manager of the Jittery Joe’s Pro Cycling Team. In between huffing and puffing chasing the ex-pro around the hills of Georgia and through a rainstorm, we had the chance to talk about the Jittery philosophy behind making it as a pro and developing cycling in the US.

Pez Hey Micah, you have built the Jittery Joe’s team as a strong development squad here in the US. So first question is what’s the better path for development for a young rider – US or Europe?

Micah Rice Interesting question and one I would probably answer differently if you asked me five years ago. Back then, I think the state of racing in the US was nowhere near what it is now, so it would definitely be Europe then. However, there are so many more quality races in the US now such as California and here in Georgia, Toona, USPro, Philly Week. Plus there’s so many more teams and sponsorship opportunities. At the same time, collegiate cycling is improving too. So there is definitely the opportunity for an American to be exposed to a lot of quality races against quality fields, while still in a comfortable environment. 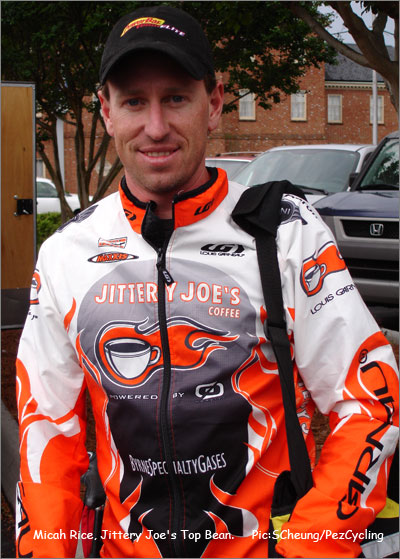 Pez So being mainly based in the US isn’t an impediment to getting on a big Euro squad?

MR Not at all! Look at the success stories. Trent Lowe did only three races with us in 2005. Redlands, Georgia, and Philly week. Redlands he got 2nd overall, following that up with the Most Aggressive Rider prize at Georgia. Then in Philly, he was pulling stroke for stroke with the big boys. That got him into Discovery this year. Then there’s Charles Dionne and Aaron Olson going to Saunier Duval – Prodir, plus Tyler Farrar to Cofidis. They were all primarily developed here in North America, so it certainly can be done.

Pez Jittery Joe’s is known as a “development” squad. What does that mean?

MR Let’s face it, in a sense all the US-based teams are “development” squads to some extent! But for us, we love being that link where new and younger pros get the opportunity to really push themselves to the next level to the point that we can’t afford to hang onto them anymore. Trent Lowe obviously is a perfect example of that philosophy. Let’s just say that we’re not meant to be a team you spend a ten year career with! The great thing is that our sponsors completely buy into that philosophy too.

Pez OK then, how do you find these diamonds in the rough, and what do you look for in a potential Jittery Joe’s rider?

MR I get about 200 resumes a year, and probably about 30 are keepers that I hang onto and look into more carefully. What I look for in amateur riders are a number of solid results, and by that I mean a number of top 10s in NRC-calibre races. Some guys think that winning some regional race is enough to get them a look, but that’s just a start. Top 10s in NRC races means you’re matching up with the top pros.

Then the next critical thing is finding out as much as I can about that rider. I go by the rule of threes, and try to get detailed references from at least three people I know who know that rider well. Sometimes that means current or past team members, who might tell me about so-and-so who was super-strong in a break with them. But I try to find out more about them. What’s their attitude like? Are they good people who will get along with my team members and the team philosophy? Do they finish races? How do they react to a bad race?

Pez So then what would you recommend to a young developing rider?

MR That’s pretty simple. Get to as many quality races as you can and do the best you can. At the same time, be a good teammate because cycling is a pretty small world and a bad reputation gets around quick!

Pez Thanks Micah and best of luck in Georgia this week!

PezCycling is travelling with Discover Adventures at the Tour de Georgia, see their website at DiscoverAdventures.com
Like PEZ? Why not subscribe to our weekly newsletter to receive updates and reminders on what's cool in road cycling?