Paris-Dakar By Bike: Lost in Translation

Our Steve Frothingham’s usual Pez-gig is to make sense and readable English out of articles written by some of our far-flung non-native-English-speaking correspondents. So when we learned about “Paris-Dakar By Bike”, he was our only hope to unravel the mysteries of … well, why on earth…???

By Steve Frothingham
Paris-Dakar By Bike is a proposed ten-week (!!) bike tour/race along the 7,000 kilometer route of the famed Paris-Dakar motor rally. After talking to the promoters (two bike-crazy Dutch guys), Steve offers this: “It’s a Euro thing. It’s a motor sport thing. I may never understand.”

I’m thinking that before an audience of North American bike racing fanatics can begin to comprehend a ten-week bike tour-slash-race thing through Europe and Africa some cultural translation might be in order.

Because unless you’re a drooling mileage junkie, you’ve got to have some passion in your gut to drive interest in something that, by the numbers, is simply intimidating, probably unprecedented and possibly absurd. 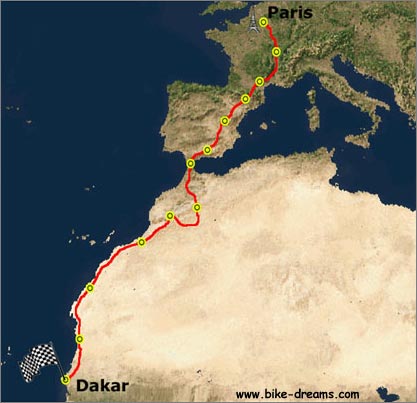 What Are Looking At Here?
There needs to be some kind of motivational motor, a narrative, a legend, some romance. Because otherwise, my God … how could you even contemplate such an undertaking: an event spanning almost a fifth of a year—lasting three times longer than the Tour de France and costing 4,900 Euros (about $6,000 U.S.), not including travel to- and from-.

What I’m talking about here is a trip planned by two Dutch guys, Wilbert Bonnй and Rob van der Geest, to follow the route, more or less, of the Paris-to-Dakar motor rally. That would be Paris, France, to Dakar, the capital of Senegal. In Africa.

Just try and explain it to the spouse
It’s hard to know what to call this event: each day’s ride/stage will be timed, and if you want to consider it a race, you are their (the Dutch guys’) guest, but mostly I’m thinking that it’s a supported tour. It is scheduled for Fall 2006. Nine people have already signed up and they are expecting about 30, all told.

Paris-Dakar by Bike, as it’s called, will cover some wonderful terrain and visit come diverse cultures: French villages, mountain passes in Andorra and Spain, the Sahara Desert and the Atlantic coast in Africa … Participants will camp. There will be a mechanic, a sag wagon, a nurse, a cook, etc.

Rob and Wilbert are contracting with an overland company from the U.K. to provide truck support on the African section. “The trucks they bring are normally used for 200-day holidays taking people all the way through Africa,” Rob says. “This company knows the roads all over Africa.” 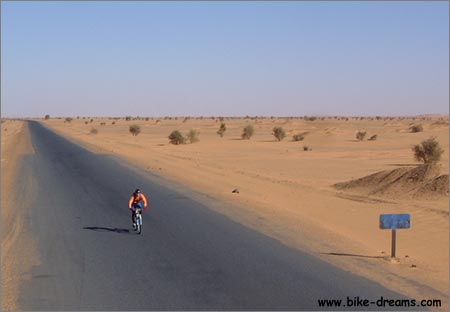 While the motor rally is renowned for its brutal offroading, the bike event sticks to paved or compacted dirt roads. Organizers are suggesting road or hybrid bikes with 700 x 32 tires.

All good. And if we were talking about a foliage tour of Vermont, or the California wine country, or even the Major Stages of the Tour, that would be enough.

But we are not. We are talking about a trip that starts in early September and ends in late-November. A trip that goes through the SAHARA, bejesus. And I can’t help but look at it from my perspective: this trip covers pretty nearly as many miles as I rode all last year (and that was a good year, mileage-wise, for me). 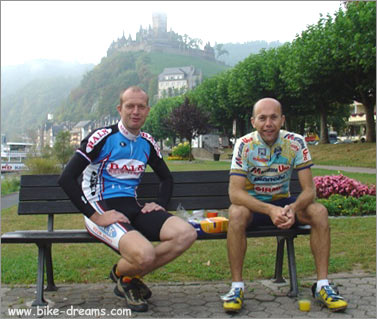 Rob van der Geest (left) and Wilbert Bonnй, both 35, thought up this whole Paris-Dakar by Bike thing while on a tour in Germany last year, presumably after a few biere. The two met while competing in the 2004 Tour D’Afrique, where Rob won and Wilbert came second. This is the first tour produced by their new company, Bike Dreams.

So here’s what you’ve got to understand: The Paris-Dakar motor rally is the closest thing the clutch-and-throttle world has to the Tour de France, as near as I can tell from my admittedly people-powered bias. The Dakar is a dusty, noisy annual endurance test for drivers and vehicles, a daily traveling circus of four- and two-wheeled racing machines, supported by a caravan of hundreds of vehicles containing media types and other necessary followers.

There are legends and stories and myths. Heroes and celebrities.

It gets hours of daily TV coverage in Europe. (In the U.S., OLN aired reports this year.)

The cognoscenti call it “The Dakar” by the way, in part because it really hasn’t departed from Paris in years. This year it left from Portugal. The bike event, however, departs from the base of the Eiffel.

So for a European sports fan, bicycling Paris-Dakar might be comparable to a North American bike fan’s interest in DRIVING the Tour de France route. Different modes of travel, but the analogous interest here is in re-capturing some of the thrill of the original events.

Tour de France is to motor rally as motor rally is to bike tour as …
Dakar, the motor event, is actually run pretty much like a bicycle stage race, with 15 timed stages with cumulative times producing an overall winner. It’s produced by ASO (the Amaury Sports Organization), which – pay attention here – also produces the Tour de France, Paris-Nice and other pro bike events, along with golf, equestrian and other motor sport events.

Dakar has its controversies that—not to treat them too lightly, since some are pretty tragic—probably have added to its mythic status. Most disturbingly, in 28 years, there have been 47 deaths connected to the race, including the deaths this year of two young boys hit by cars in Senegal and a motorcycle racer who crashed in Mauritania. The rally also draws criticism for its environmental damage and its vulgar display of wealth and glitz as it campaigns through impoverished countries. Plus there’s an icky colonial theme to the whole enterprise: Senegal was a French possession until 1960. 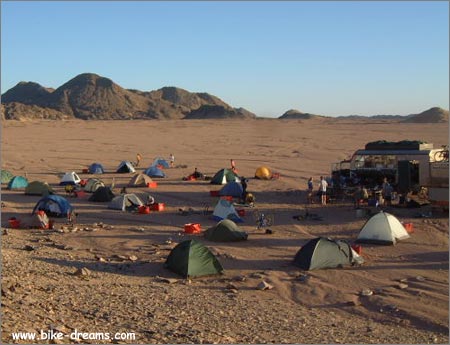 Not a Starbucks in sight. Paris Dakar by Bike will camp out for ten weeks.

So PDbB, is a bike tour (slash race) inspired by a legendary auto rally that, in turn, was inspired by, or at least modeled on-, the Tour. This algebra, if nothing else, gets us back to somewhere where we N.A. bikies can maybe get a grip.

Rob and Wilbert, whose day jobs are in the IT industry, announced PDbB early this month. The first registrant signed up two hours after the Web site went live. “We do not know how this guy could find the Web site that fast,” Rob said.

So far, the registrants are from the Netherlands, Belgium, Sweden, Finland, the U.K. and Malaysia. No North Americans yet, although a couple Canadians have inquired.

Rob doesn’t know much about the registrants yet, so it’s hard for him to confirm or deny my theory that participants must each have a burning desire to do what the motor heads do, albeit in a quieter, more culturally attuned manner.

“It will be a mix of ages and racers and tour riders,” he offers. “Till now all the registrants are men. One of the participants told us he was in the pasta national top table-tennis player in Sweden.”

• See it for yourself at Bike-Dreams.com

PEZ Socks: Made Just For You