Roadside PEZ Paris-Nice Stage 8: Daniel Thévenon has made it to the final stage of the 2017 Paris-Nice fairly unscathed, internet connections excepted. Down on the South coast of France, Daniel managed to get behind the scenes of stage 8 in Nice to take in the Mediterranean ambiance and the craziness of a bike race.

Ten o’clock in the morning at the Servotel establishment in Castagniers, a few miles to the north of Nice. These empty plates and bowls are all that remains after the riders of the Delko Marseille Provence KTM team ravenously downed their morning meal, specially prepared for them by the team chef. Cycling legend Eddy Merckx, who had been staying in the same hotel, made an unexpected appearance in the breakfast lounge as Rémy Di Gregorio and company were finishing their calorific feast. The presence of ‘the Cannibal’ is intimidating. Before departing as furtively as he arrived, the great Belgian gives the Provençal riders a severe stare. He seems to be tacitly challenging them to emulate his achievements. No pressure, then. 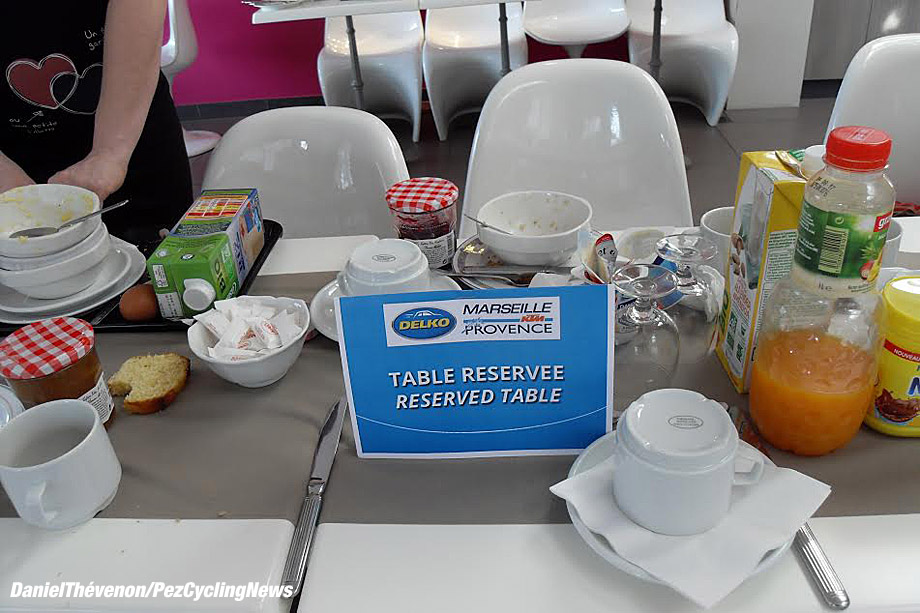 Outside, in the hotel’s parking lot, the athletes’ bicycles have been secured to the back of the team van and are ready to be transferred to Nice for the start of Stage 8, the last chapter in this year’s Race to the Sun. 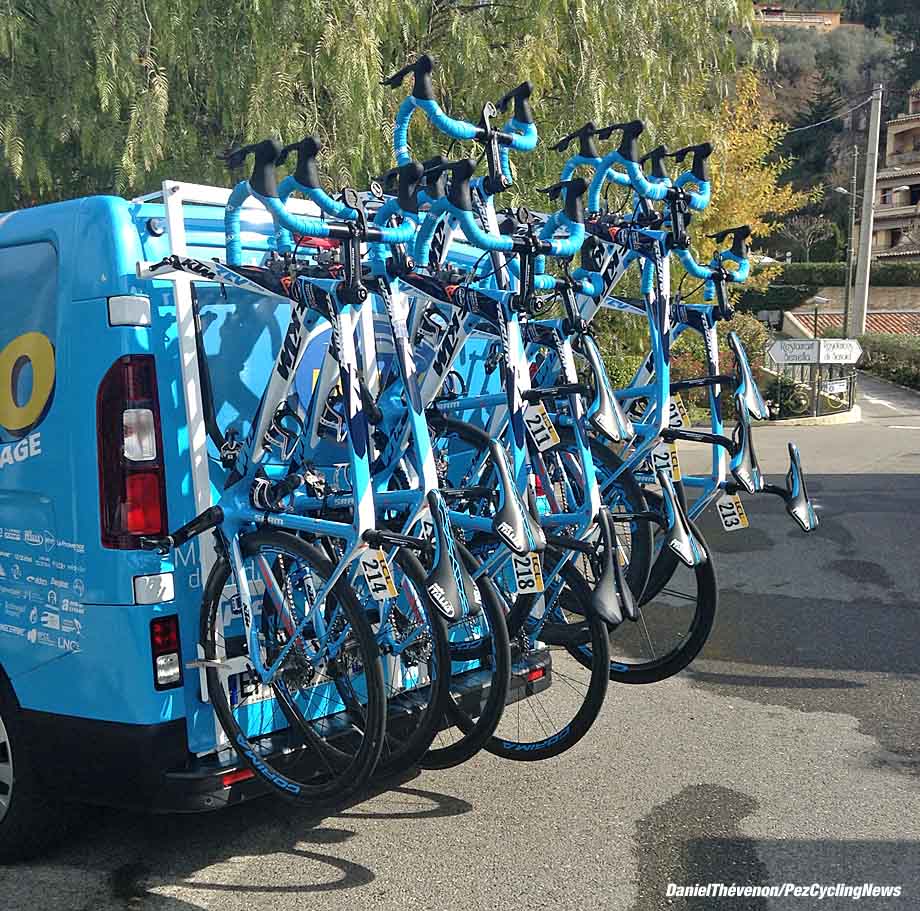 There is a strong police presence around the village départ in Nice. Armed soldiers and bulky members of the CRS patrol through the streets, avenues and places. Months after the latest wave of terrorist attacks in France, the state of emergency remains very much the order of the day. 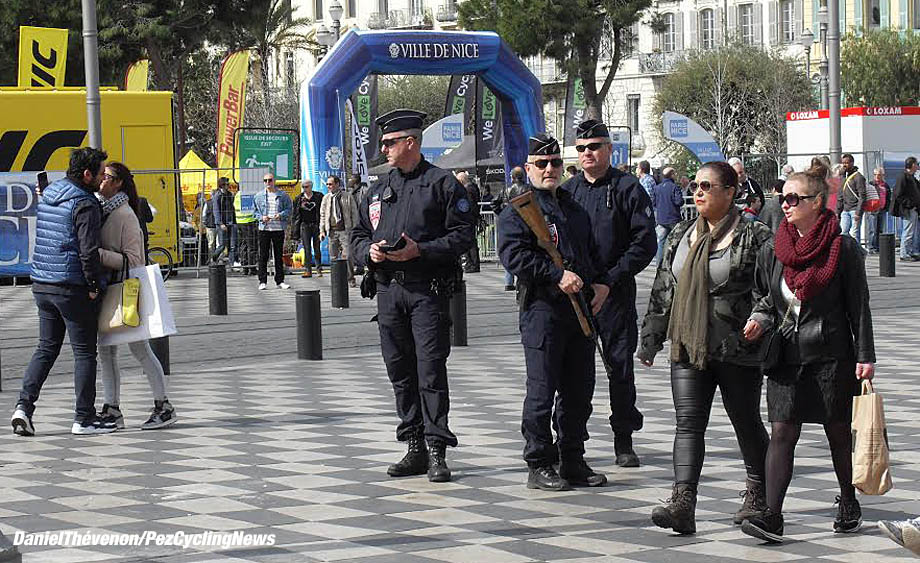 Should the conventional security forces not suffice, Batman is also at hand to deal with the more difficult cases. Either that or there has been a confusion in somebody’s diary between the dates of Paris-Nice and the city’s annual carnival, to hilarious effect. 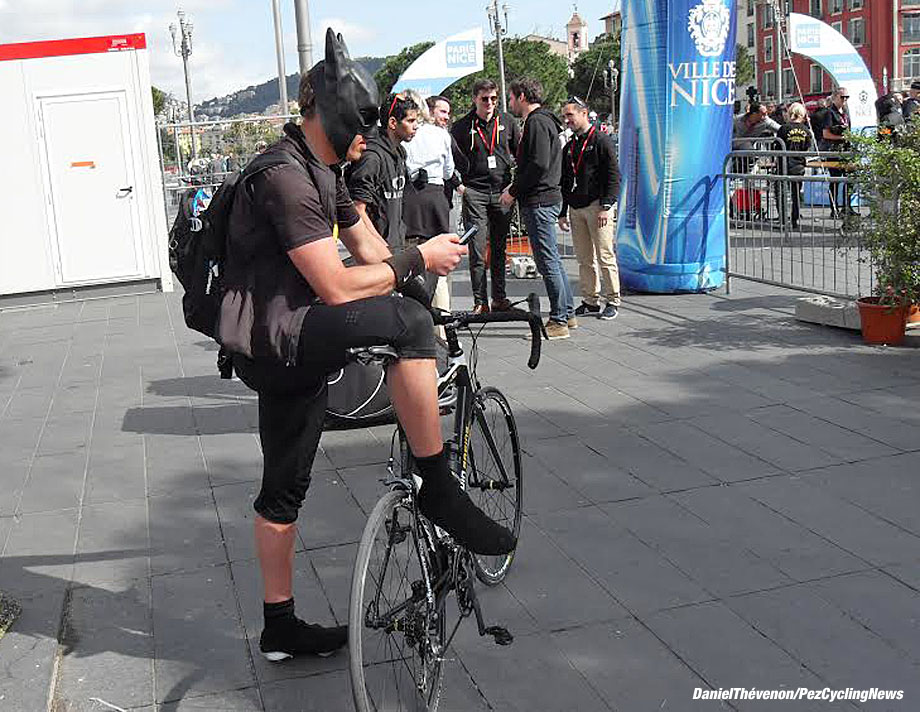 Nice’s Avenue Félix Faure is saturated with Katusha-Alpecin team cars, Sunweb buses and AG2R-La Mondiale trucks. Insurance companies, shampoo brands, telecommunication giants and patented cooktop extractors compete for supremacy before the day’s racing has even begun, in a battle so relentless and fierce that it will make today’s hostilities on the Col d’Eze look like a boringly civilized game of croquet. A mottled traffic jam has many a directeur sportif dreading the sight of Ilnur Zakarin’s handlebars entangled with Bram Tankink’s spokes. 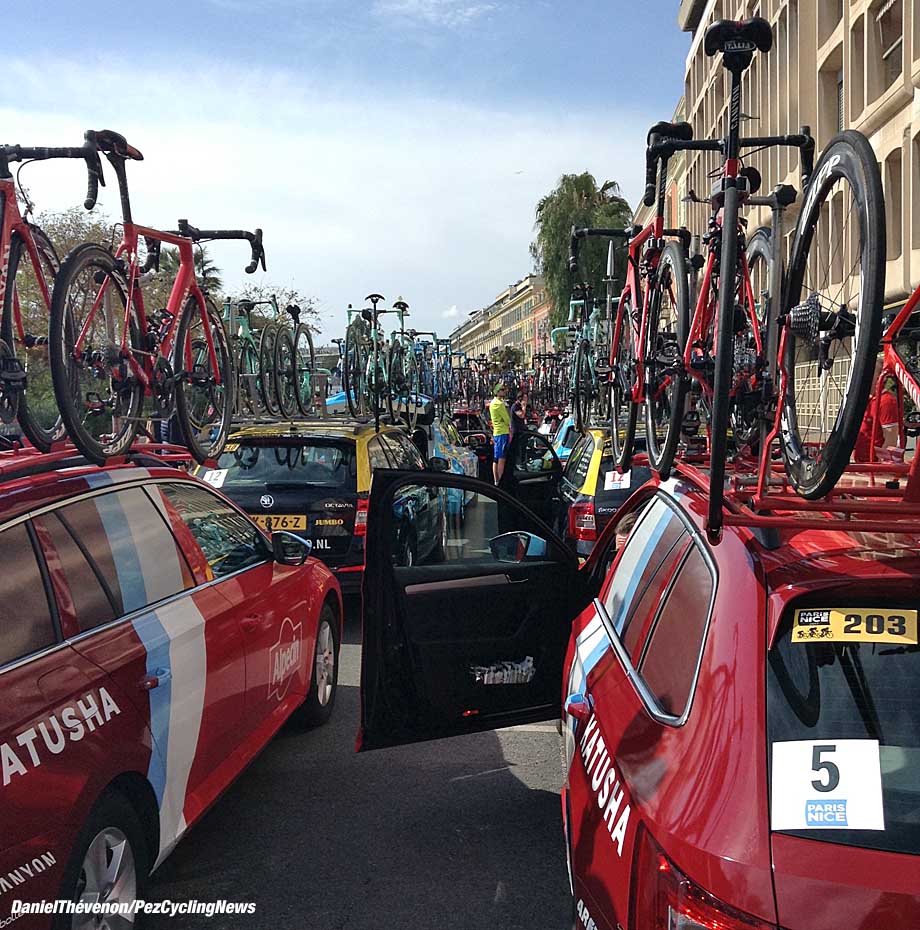 Sylvain ‘the Machine’ Chavanel stares vacantly into the distance. The battle-hardened Frenchman knows what to expect of today’s short but escarped stage. 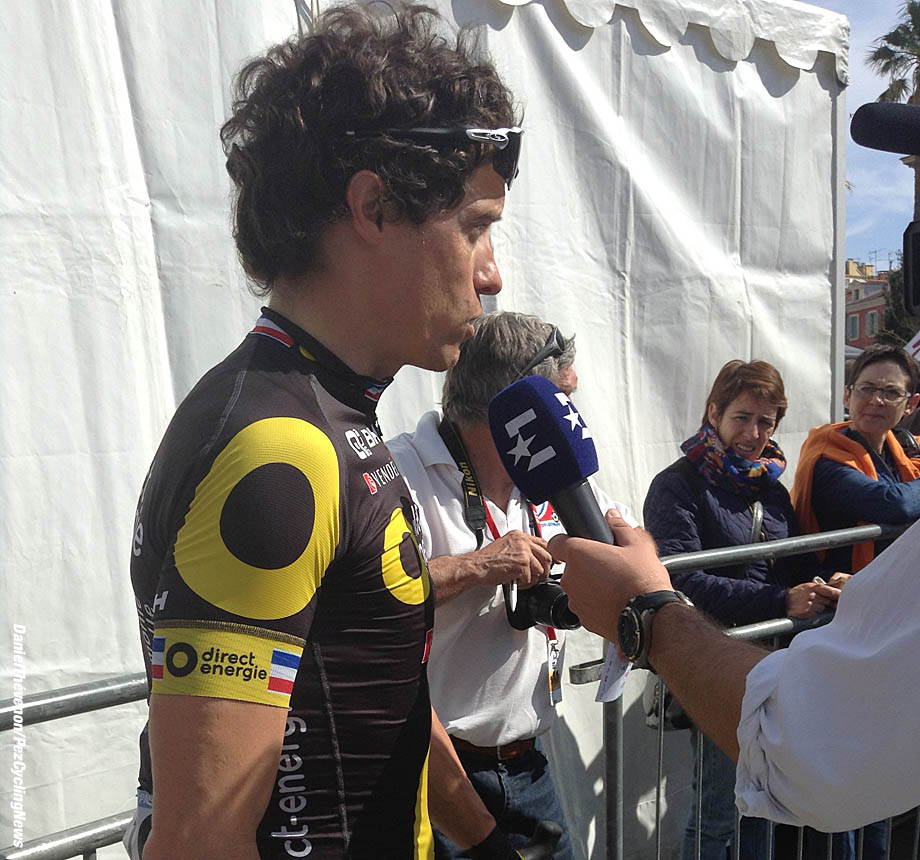 Michael Valgren of Denmark shows off his flamboyant blond chevelure. A career in surfing after he retires from cycling is surely not out of the question for the Astana rider. 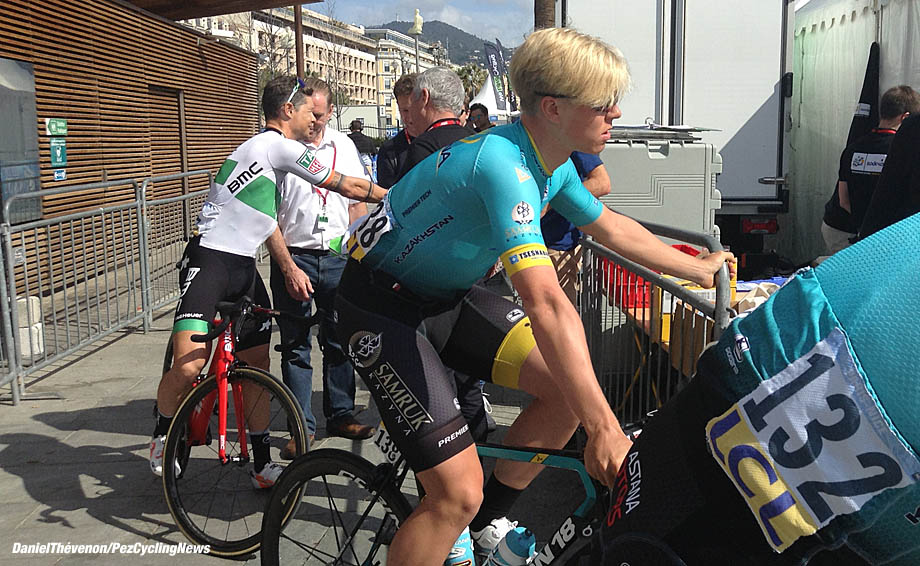 Dan Martin basks in the sunshine of the Côte d’Azur. After a feisty ride up the Col de la Couillole, the Irishman, a former winner of Liège-Bastogne-Liège, lies second in the overall rankings, half a minute in arrears. Will this be his day? 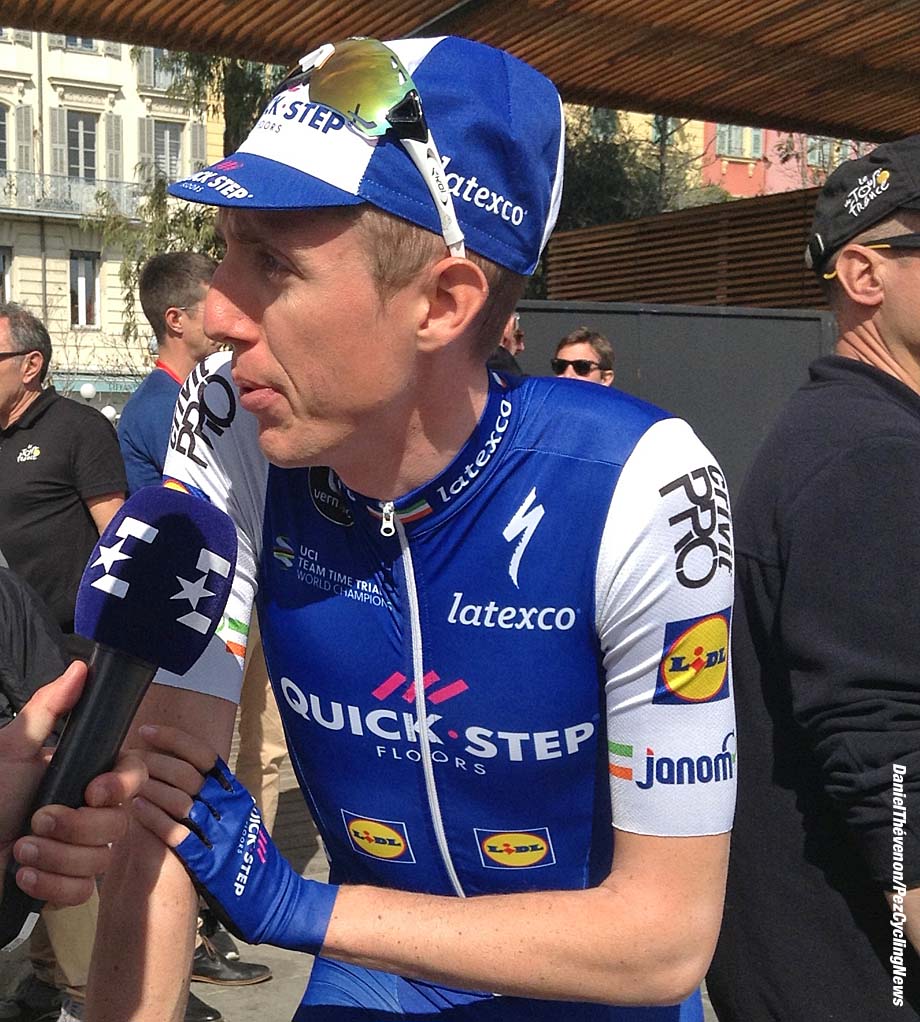 Richie Porte finds himself at the foot of the formidable Col de la Signature, an hors catégorie climb with an average gradient to send shivers down the spine of Charly Gaul. The characteristics of the much-feared pass are well known to connoisseurs: few hairpin bends and the final part is reputed the toughest. Compared to this, the Couillole—at the top of which the Australian triumphed yesterday—was peanuts. 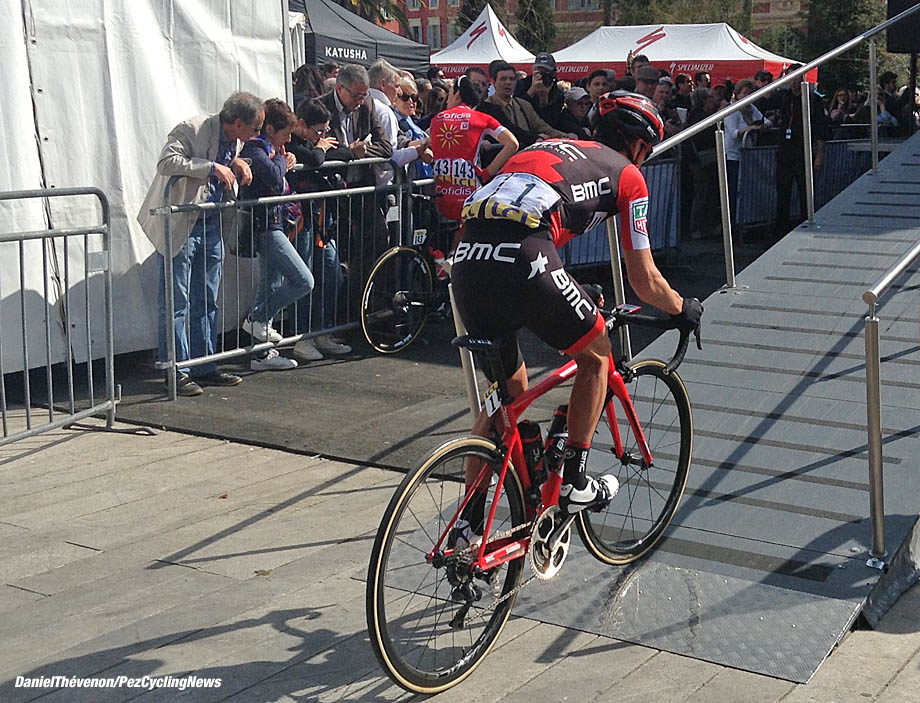 “Assassins!”, he yells at the race organizers after cresting the atrocious ascent on foot. 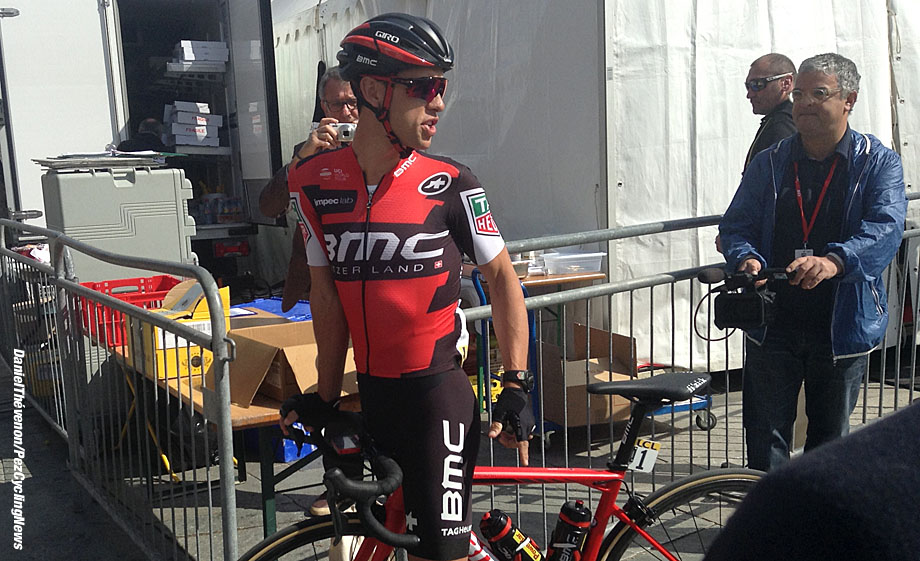 Mathew Hayman, the surprise package of last year’s Paris-Roubaix, exchanges pleasantries with a race official. The latter regretfully informs the Australian that the cobbles of Nice’s Avenue de Verdun are nothing like those at the Carrefour de l’Arbre. The “King of the North” answers that the city should revise its paving methods and draw inspiration from towns like Arenberg and Orchies. 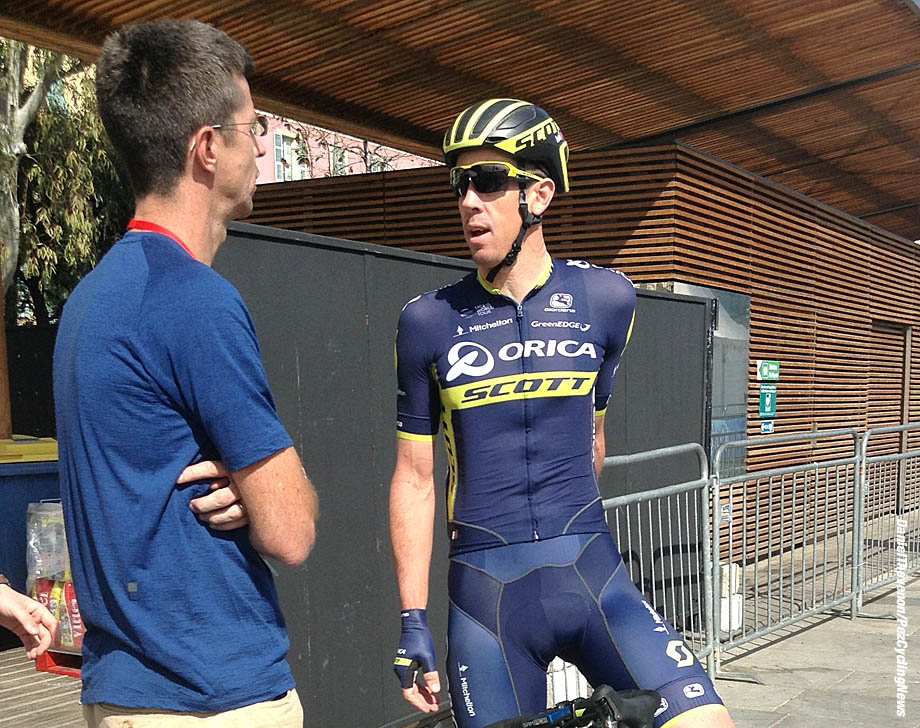 Lotto-Soudal’s Tony Gallopin sounds a cautious note ahead of today’s stage. “We shall see how things go”, he tells a journalist. 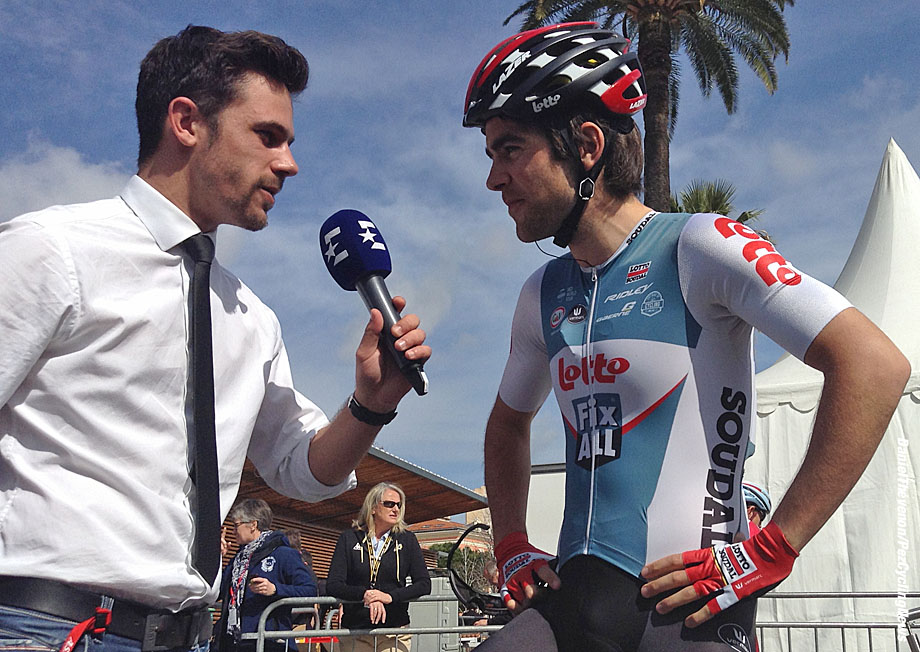 France’s Warren Barguil promises to give everything he has today, so long as that is alright with the gendarmerie. 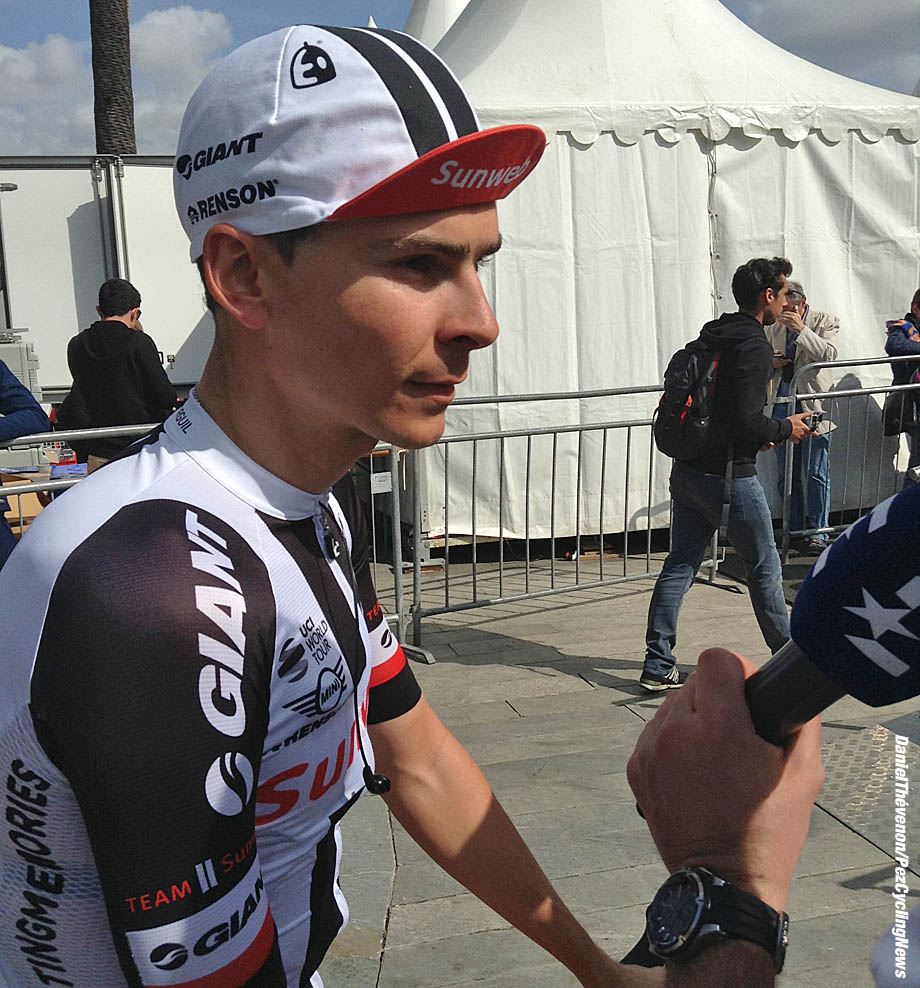 Multiple generations of Roches gather at the start of Paris-Nice’s final stage. Only one member of the family will be racing today, the rest of the competition will be glad to hear. 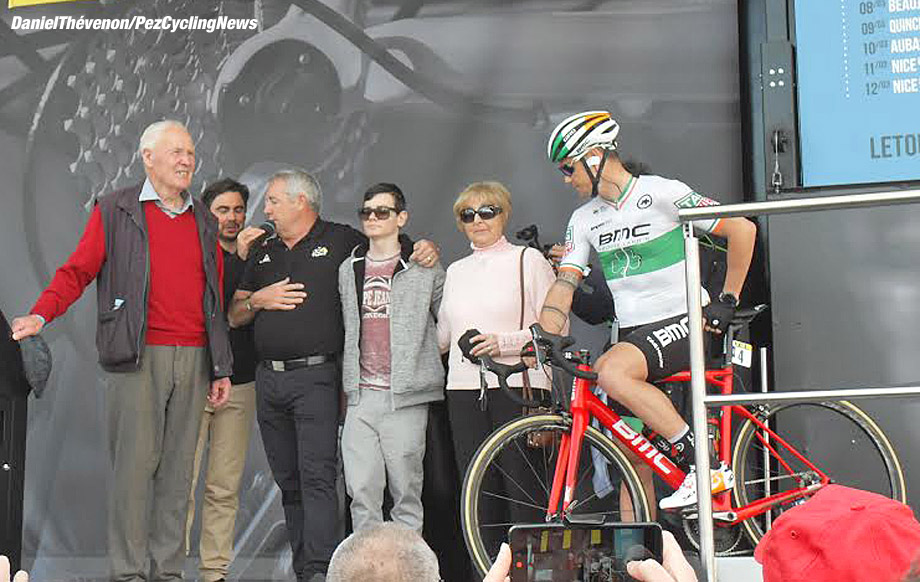 The champion of Belgium Philippe Gilbert is all set for a trek through the Mercantour mountains. 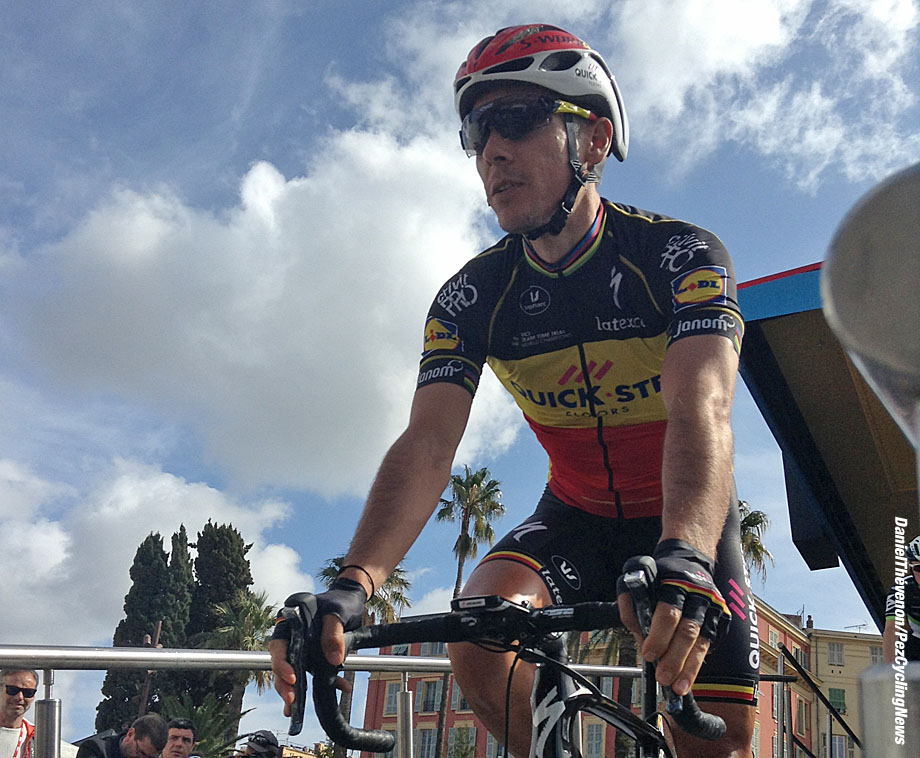 Alberto Contador toboggans down the ramp of the sign-on platform and prepares to answer a dozen interviews before proceedings get under way. El Pistolero is expected to attack his Colombian rival Sergio Henao today. A mere 31 seconds separate the two riders in the General Classification. 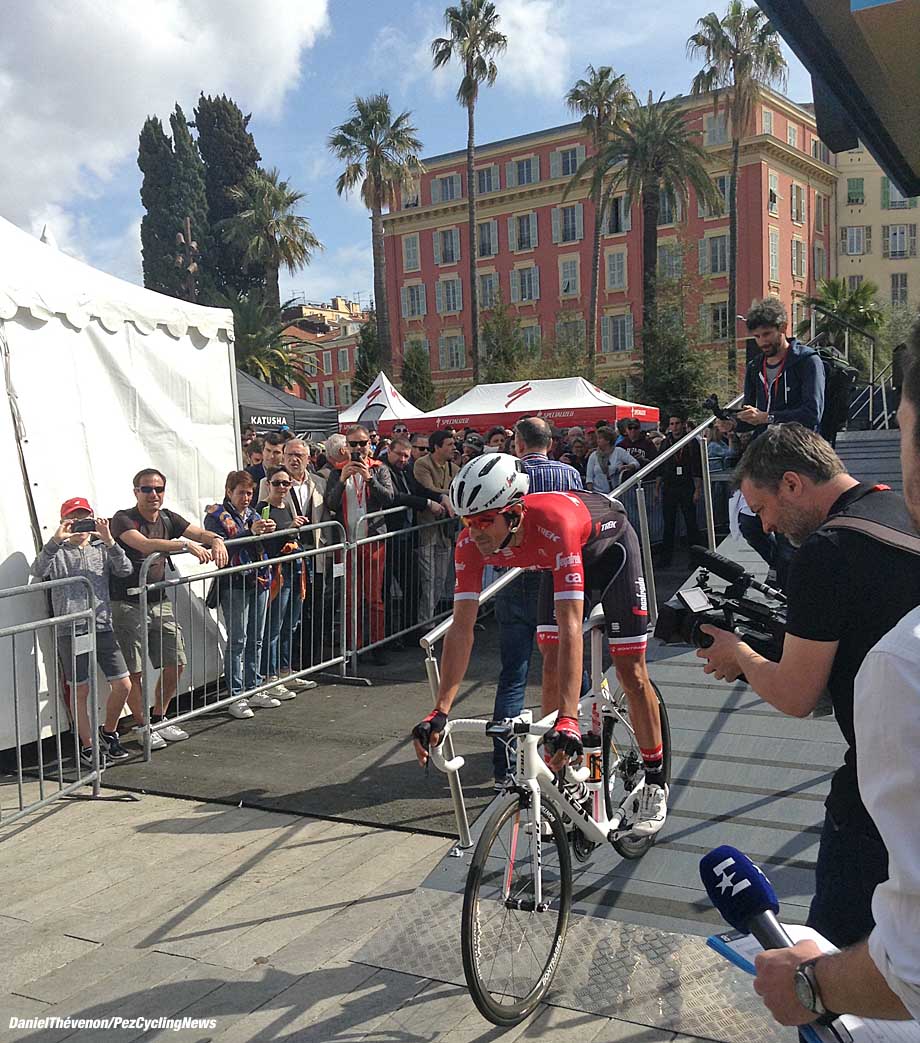 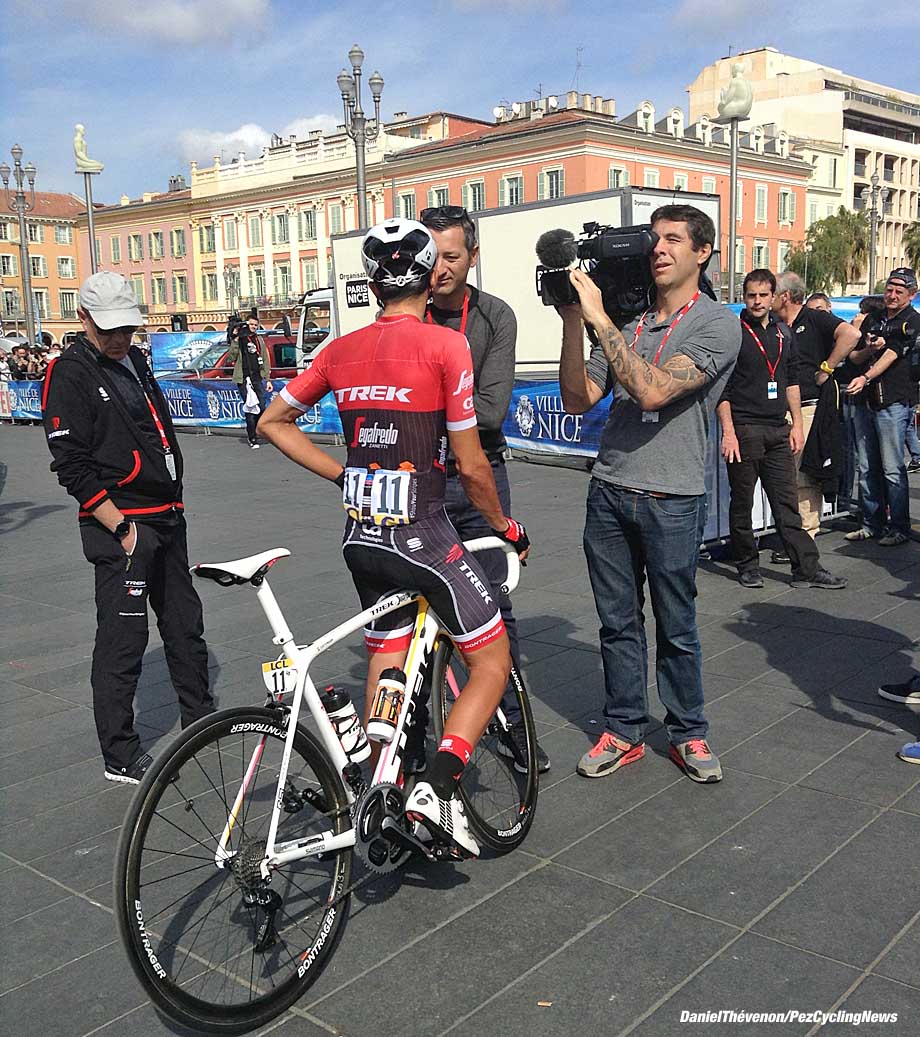 If Henao loses the coveted yellow jumper, there will at least be no shortage of snapshots of the Sky leader wearing it before today’s battle, may his grandmother in Rionegro rest assured. 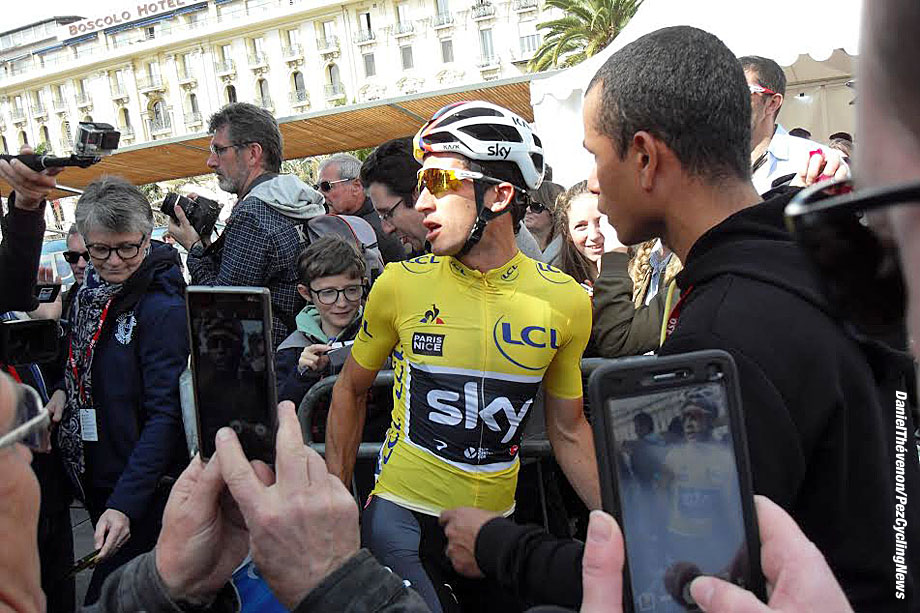 The champion of Slovakia, Juraj Sagan, awaits the send-off, flanked by his Bora-Hansgrohe team-mates. 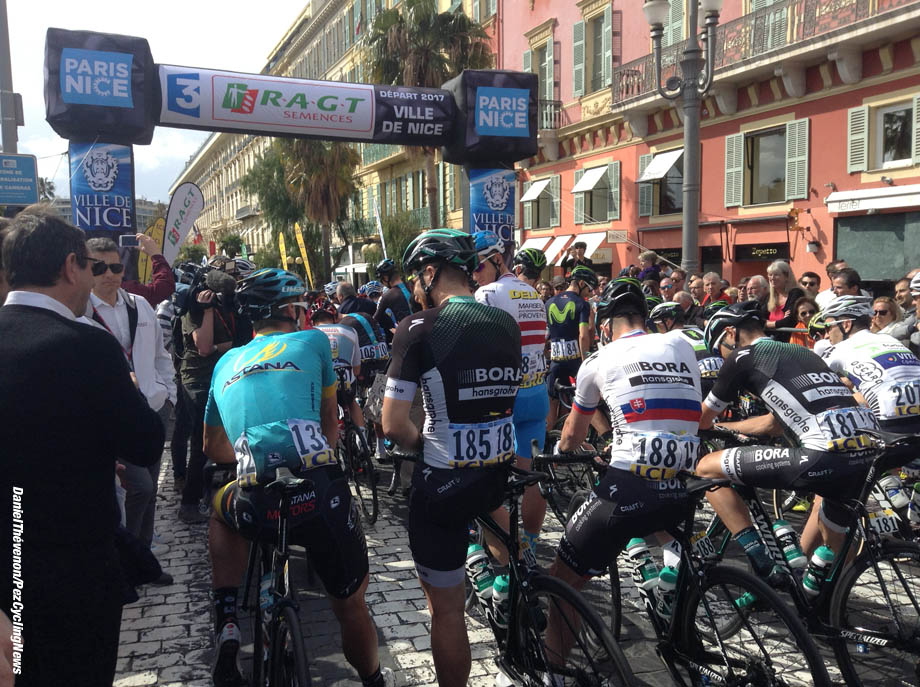 The excitement of the younger generations for the event knows no bounds. 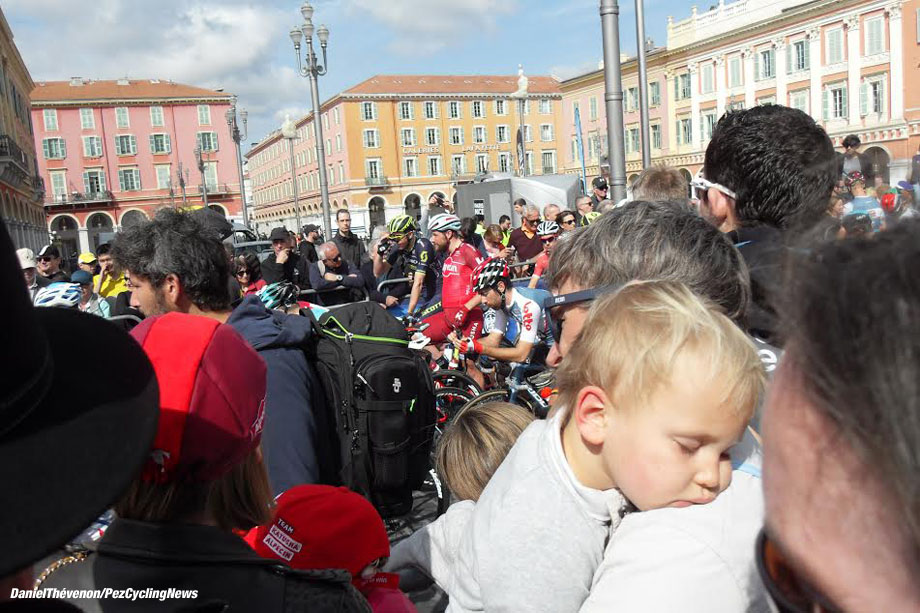 Today, the Permanence is placed in the luxurious Hôtel Aston, a four star establishment situated a short walk away from the Promenade des Anglais. Over the course of a week, the evanescent locality will have found temporary homes in Amilly’s concert hall, Chalon-sur-Saône’s Colosseum, Beaujeu’s old theatre, Fayence’s cinema, and the small, cramped town hall of the mountain village of Roubion, inter alia. 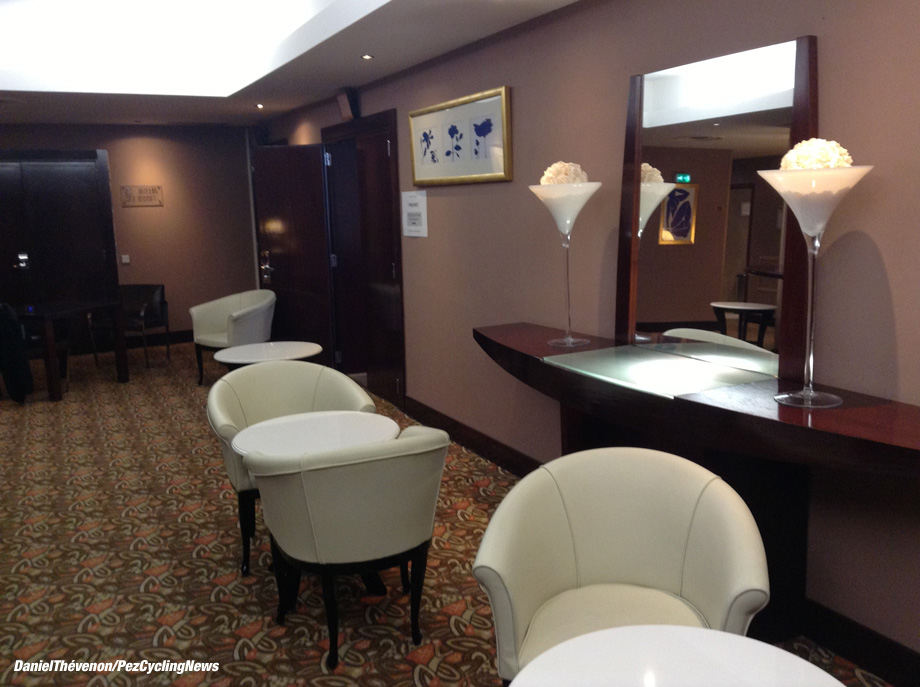 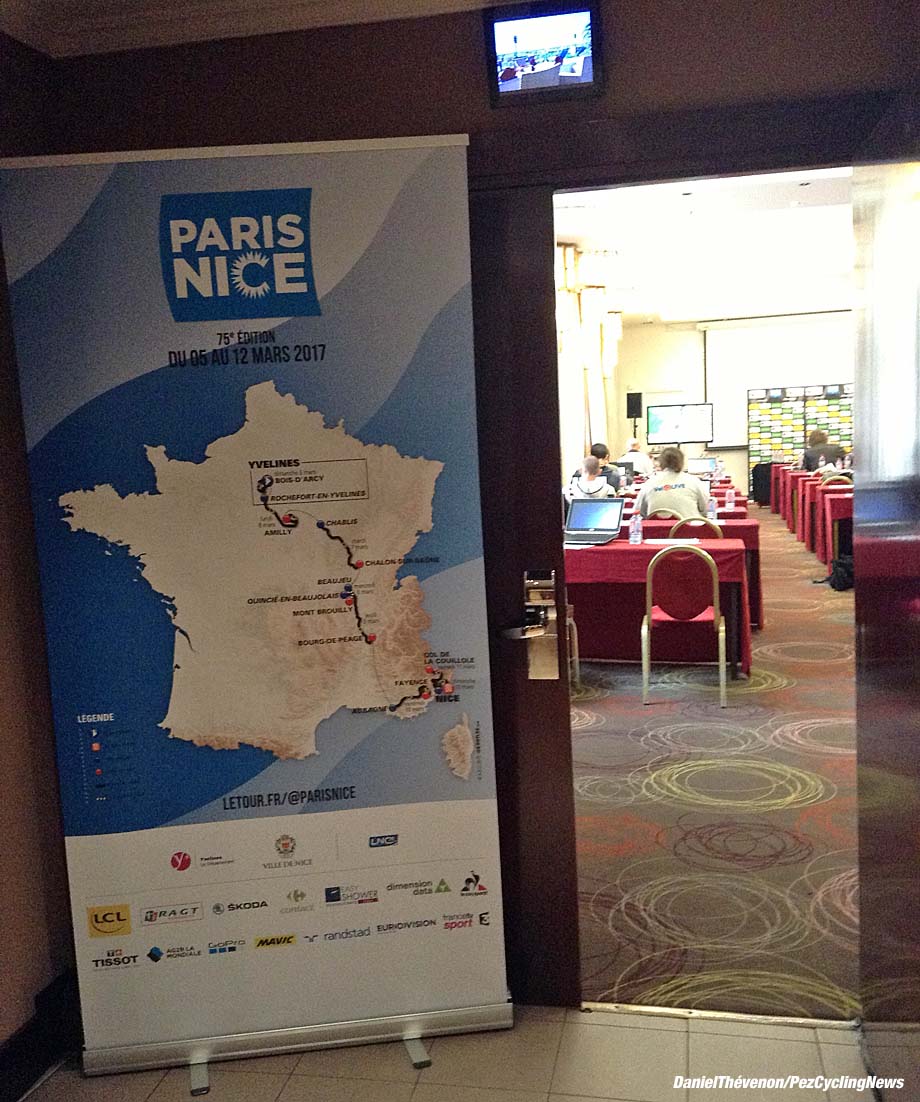 A giant screen displayed at the arrivée shows Contador’s searing attack in the Côte de Peille. Henao loses contact with his Spanish challenger at this point and will not see him again before the race concludes on the Quai des Etats-Unis. 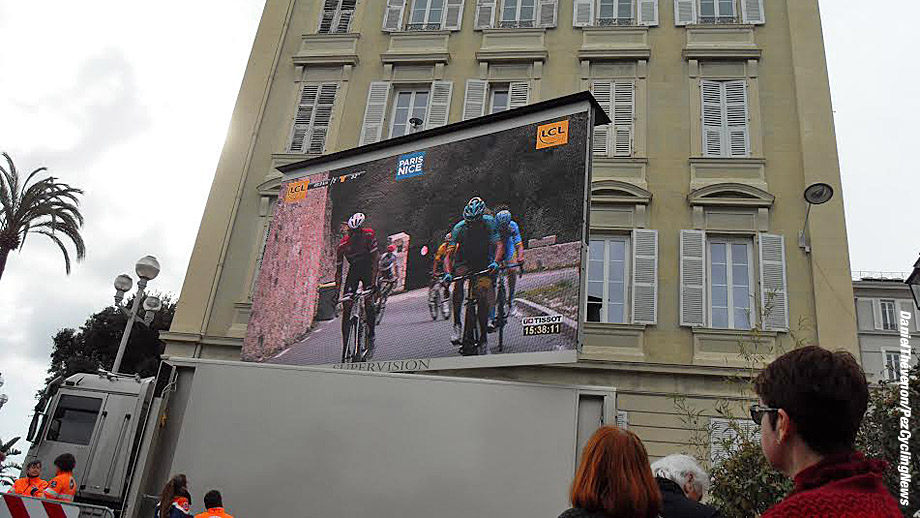 Yet, at the end of the day, it is the champion of Colombia that walks away with the fabled maillot jaune on his shoulders. Henao prevailed over Contador overall by a margin of just two seconds after a thrilling finale on the Bay of Angels, ensuring a third successive triumph in La Course au Soleil for Team Sky. 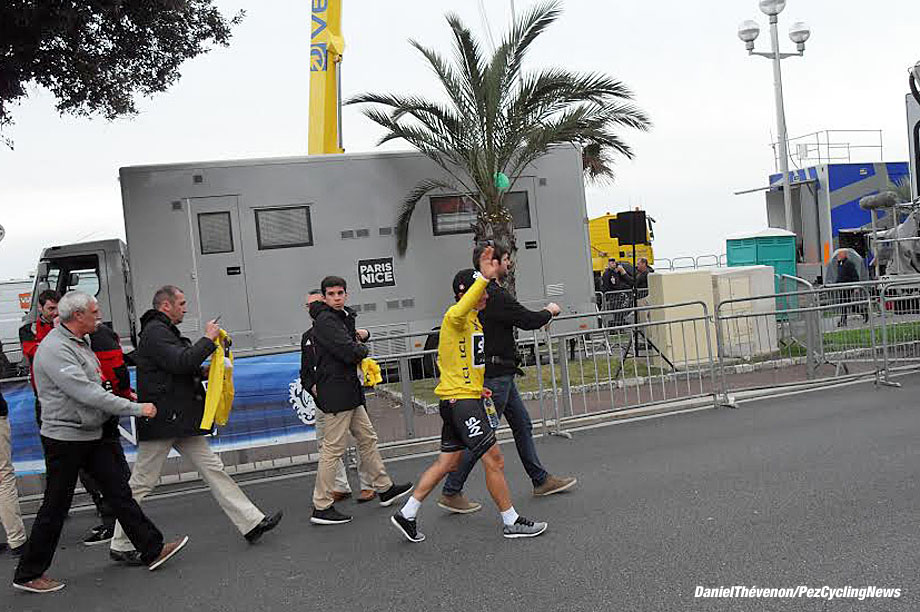