On March 6th the Paris-Nice starts on its annual journey to the Cote d’Azur. The race was first run in 1933 and since then has built a history packed with legends, great exploits and tragedy. In this special report from CyclingRevealed, we recall the 1966 edition which probably ranks as the greatest Paris-Nice of them all.

Paris-Nice March 8-15, 1966:
Whenever Jacques Anquetil and Raymond Poulidor lined up together for any race it was a sure bet that their exploits would be one of the main story lines. And so it was in 1966 when their legendary rivalry was still at full boil. Today most people identify the epic Anquetil/Poulidor battles with the 1964 Tour and especially with the ascent up the Puy de Dome when the two men ground their way up the climb bumping shoulders. The pictures from this day are some of the most famous in cycle racing history.

The proud and aristocratic Anquetil was a champion for whom winning was the only real option — he could not bear to be beaten. He would push himself to incredible lengths to achieve his goals. His determination to succeed would be acutely peaked if Poulidor was in the race with him. Throughout his career, Anquetil would never let Poulidor beat him and if Anquetil could not win the particular race, he would manipulate matters so that Poulidor also would not win. 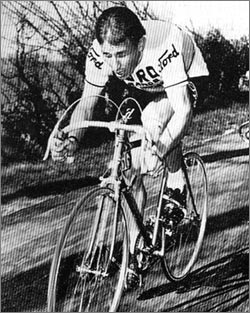 The great Jacques Anquetil would never allow himself to be beaten by any rider.

The combination of Anquetil’s champion mentality and his obsession with beating Poulidor produced one of the greatest rides that the Paris-Nice, or any other race for that matter, has ever seen. For the first five days the Peugeot team set the pace as the 1966 race headed south. Interestingly a member of that team was the 20-year old Eddy Merckx riding in his first big stage race (he finished 4th on GC). Observers noted his all-around ability in sprinting, climbing and time-trialing and predicted a bright future for the youngster. They did not have to wait long. Later that month Eddy won his first Milan-San Remo.

Often plagued with gruesome weather, Paris-Nice in 1966 was bathed in bright warm sunshine. From the start in Montereau, just south east of Paris, to Marignane, near Marseilles, the bunch remained as fast moving cohesive unit with each day culminating in great bunch sprints. At Montceau-les-Mines (stage 2) the great Rik Van Looy (“the Emperor of Herentals”) was beaten by the Italian Vittorio Adorni in a straight sprint that normally Van Looy would have easily won. Immediately the rumors started that the great champion was finished. A couple of days later Van Looy took the bunch sprint with a style and panache that rapidly restored his reputation. Again the following day Rik won the bunch sprint (behind solo winner Geldermans) with a jump that put him yards ahead of Adorni and the rest of the bunch. At this point the real battle for GC had not yet begun. This would commence in the rugged terrain of Corsica the day after Van Looy’s second stage win.

The first stage run off under hot Corsican sun was a short mountainous affair which produced a sensation when Roger Pingeon abandoned the stage and then in an emotional meltdown promptly announced his retirement from racing. Retirement did not agree with him: he went on to win the 1967 Tour de France.

Next day the riders faced a 33.5km ITT and normally Anquetil would have been the clear favorite in his specialty discipline. Many described the course between Casta and l’Ile Rousse as the most beautiful they had ever seen. They also considered it one of the most difficult courses ever seen. Narrow and twisting, it turned and doubled back on itself, cutting through rocky outcrops with a splendid backdrop of the high Corsican range fringed with snow covered peaks in the distance. Apart from the final one mile run-in, there was hardly a straight stretch longer than 200 yards — one journalist counted 300 bends. In the final miles the deep blue Mediterranean Sea sparkled to the riders’ right.

For a rouleur like Anquetil, it would be impossible to get the big gears churning over. He was seen riding with his customary style: rock solid, streamlined with that familiar stare of concentration peering out of his long, drawn face glistening with sweat. In total contrast, it was a wild-looking Poulidor that hove into view, bobbing all over his bike and thrashing at the pedals. For the first time in his career Poulidor beat Anquetil at his own game, by 36 seconds. Today it is hard to imagine the shock waves that this result sent through the world of cycling, but the very popular Poulidor had given his legions of fans great hope of overall victory. Anquetil accepted defeat with grace while the Corsicans mobbed Poulidor with delirious joy. The stage was now set for something special to happen, for Anquetil would make no excuses for his defeat. He would simply wreak an awful revenge.

Raymond Poulidour won the hearts of the fans with his tenacity and grit.

Next day the race set out on another mountainous stage through Corsica. Overnight snow had fallen and the bunch wrapped up warmly as it headed for six tough cols. As the sun came out, so too did the Italian racers. Although an Italian won the day, most eyes were on Anquetil and Poulidor. With renewed confidence Poulidor ‘harassed’ Anquetil yet again by attacking and dropping him on the col just before Vizzavona. On this descent, many of the shady curves still had snow laying on them. Taking more risks than he would normally have cared for in these conditions, Anquetil rejoined his enemy before the finish.

Next day the race returned to the mainland for the final mountainous stage from Antibes to Nice. Anquetil had vengeance in his soul. Poulidor, in the lead, was on the verge of finally beating his nemesis. In the background a very crafty Adorni, in third place at 59 seconds, was plotting to capitalize on the Anquetil/Poulidor feud.

Throughout the day Anquetil’s Ford-France team attacked Poulidor and his Mercier team. The two teams were forced to work together when the wily Adorni escaped on a steep and narrow climb in the back country of the Riviera. This unlikely alliance was forged when the Italian had stretched his lead out to 40 seconds. The Ford/Mercier combination demolished Adorni’s GC dreams but, once reined in, there was still some very serious racing to do. Anquetil had been quietly plotting on how to overcome his 36-second deficit on Poulidor. The big clue was that he had appeared for this mountain stage with his time trial bike sporting 180mm cranks.

It has been said that Poulidor answered no fewer than 38 attacks from Anquetil and his team that day. The 39th and last attack came on the last ascent of the race, the relatively mild climb to Tourettes-sur-Loup. At first Poulidor desperately hung on to his tormentor as the two of them rode away from the field. Finally the hapless ‘Pou-Pou’ cracked and left Anquetil alone in his majestic glory and obsessed with victory. On his own at last, Anquetil faced 21 miles — downhill at first and then dead flat along the sea – in which to regain the 36 seconds and hand Poulidor another crushing defeat. One observer saw Anquetil pedaling a huge gear ratio like the fury and at a rate normally associated with derny races. He was riding at his limit, his hollow, sweat-streaked face with eyes reflecting his remorseless soul seeking vengeance. Those fortunate to have witnessed this performance say that they would never forget it.

Soaked in sweat, Anquetil crossed the line in Nice to be pounced on with uncontrollable joy by his famous directeur sportif, Raphael Geminiani. It was 1 minute and 24 seconds later that the bunch arrived with the poor disillusioned Poulidor, his face a mask of despair. Anquetil won the race by 48 seconds.

Had GPS timing been around in 1966, the opinion of many could be confirmed: Anquetil rode the fastest 21 miles ever recorded on a bike. The exploit was immediately elevated to ‘campionissimo’ level with direct comparisons to Coppi’s best. The crowds at the finish created a mob scene with everyone wanting to get near the great man. And today that Paris-Nice performance is ranked alongside Anquetil’s 1964 Tour win and his astounding Dauphine- Bordeaux Paris double.

Postscript: In the early 1970s I was traveling through France to Brittany. Overnight we stayed in a classic old French hotel. Next morning as we were loading up our cars I was astounded to see Anquetil and Poulidor happily chatting as they left the hotel. I dropped everything and headed for these two living legends. Anquetil was most polite and almost shy as he suffered my very poor schoolboy French. With his distinctive smile he agreed to autograph a cycling magazine I was carrying. Poulidor meanwhile quietly slipped away to his car. The next time I saw him was in 2000 on Mont Ventoux.
It is true that once they stopped racing the great rivals became lifelong friends.

Thanks to our buds at CyclingRevealed.com for this great story. Check ‘em out and tell ‘em Pez sent ya!
Like PEZ? Why not subscribe to our weekly newsletter to receive updates and reminders on what's cool in road cycling?

The ProTour: Lift-Off Is Imminent!