Memories of a Legend: On Wednesday the 6th of February, over a thousand people, made up of family, friends, fans, bike riders and acquaintances will pack Manchester Cathedral to say goodbye to a great man – Paul Sherwen. PEZ editor, Alastair Hamilton, worked for Paul in the 80s and now has, eventually, managed to give us his memories.

Africa was a big love of Pauls

I’ve been trying to write this article since Paul died on December the 2nd. It has not been easy. Not just because of the emotions, but because there is so much I could write on the subject of Mr. Sherwen. But here goes:

I think I first met Paul Sherwen in 1985 in the house of cycling coach and guru, Harold ‘H’ Nelson in Manchester. I had not long moved to the area and ‘H’ was famous for not just coaching some of the best riders of the time, but also imparting knowledge on how you should live your life, not just as a bike rider, but as a well-rounded human being. You would enter H’s inner sanctum to find Paul sitting on the sofa imparting gems on life in the European pro peloton. You knew you were lucky to be in the company of two very special people. 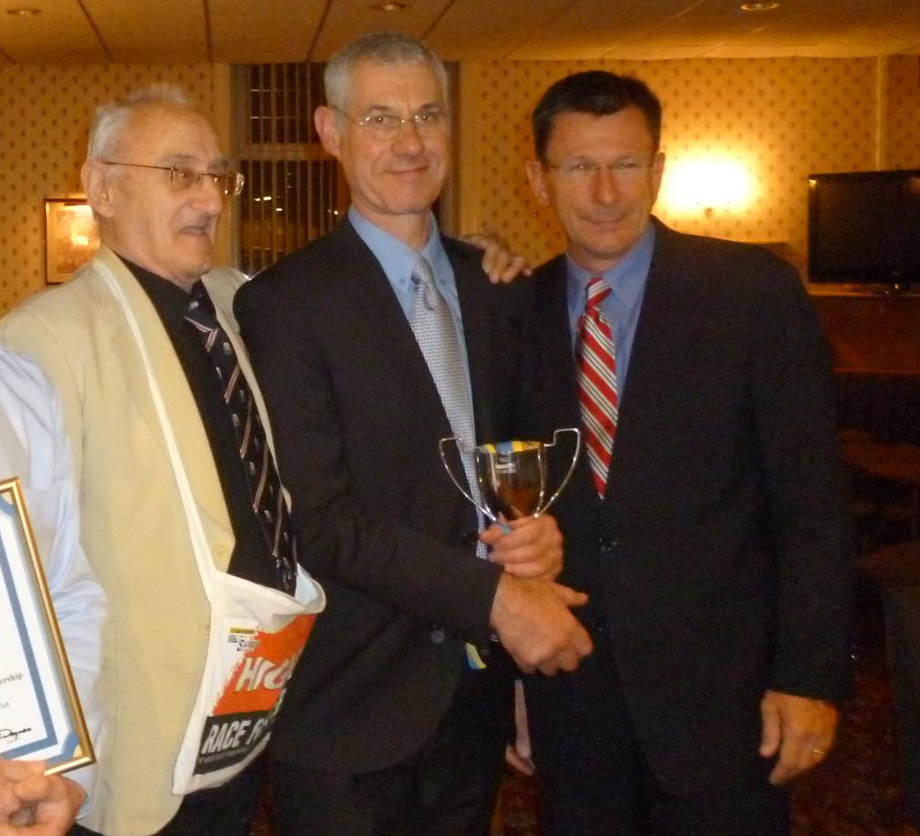 H on the left, Paul on the right at a club prize presentation

Paul Sherwen, John Herety, Graham Jones (all continental based Pros) would train with a group that met at the crossroads in Handforth, South Manchester, when they were at home. There would also be a good selection of National champions amongst the group and if you wanted to be any sort of bike rider, this was the group to (try) ride with. I have a foggy memory of leaving with them, but often riding home solo or with a couple of others, usually in silence. 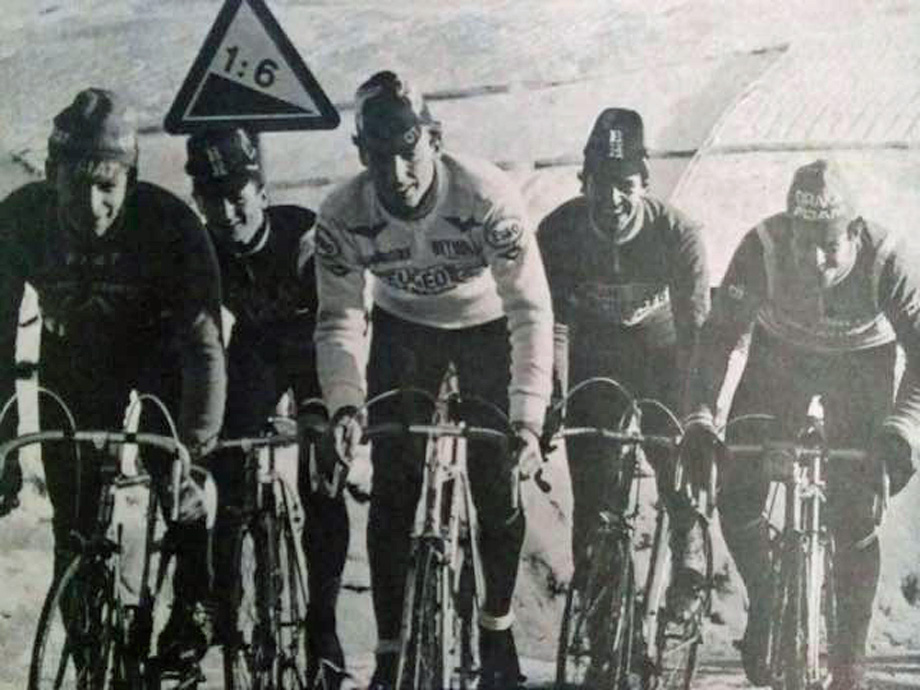 Winter training with the local stars

Another occasion I remember was in the bike shop I was then working in, owned by my then wife’s brother-in-law, retired pro, Dave Cuming. It was a winter’s day and a group of well wrapped up cyclists piled their bikes against the shop front and came in carrying a wheel. It was Sherwen, Herety, Jones and Dino Davie, who had signed for Italian team Carrera. Dino had broken a spoke in his front wheel. As with the Continental style of the time, the spoke was un-butted and as thick as a fence post, even with one spoke out the wheel was straight and true. The Italian mechanic had also filled the nipple eyelets on the rim with tub cement so that had to be chipped out to replace spoke and nipple. Paul must have been impressed as he contacted me soon after about opening a bike shop. 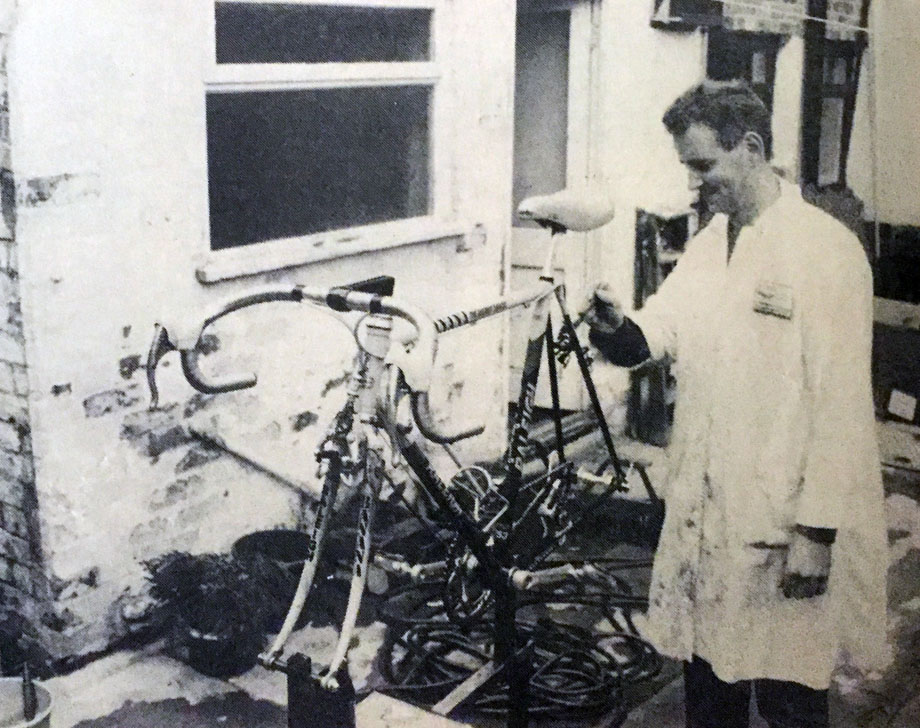 The bike shop idea didn’t get off the ground, but Paul was soon looking for me for a different reason. I was in Glasgow visiting my parents and Paul had hunted me down and left a message to phone him, no mobile phones in those days. “What are you doing next week? Meet me for dinner on Monday, I need to ask you something.” By Tuesday I was a full time team mechanic for a professional cycling team, one of the best in the country. In those days Britain had a very healthy pro scene with a mix of road races, televised city centre crits and stage races, plus, due to Paul’s Euro contacts, the Raleigh-Banana team raced abroad in some short stage races, semi-Classics and many Belgian mid-week kermess races – a full schedule. 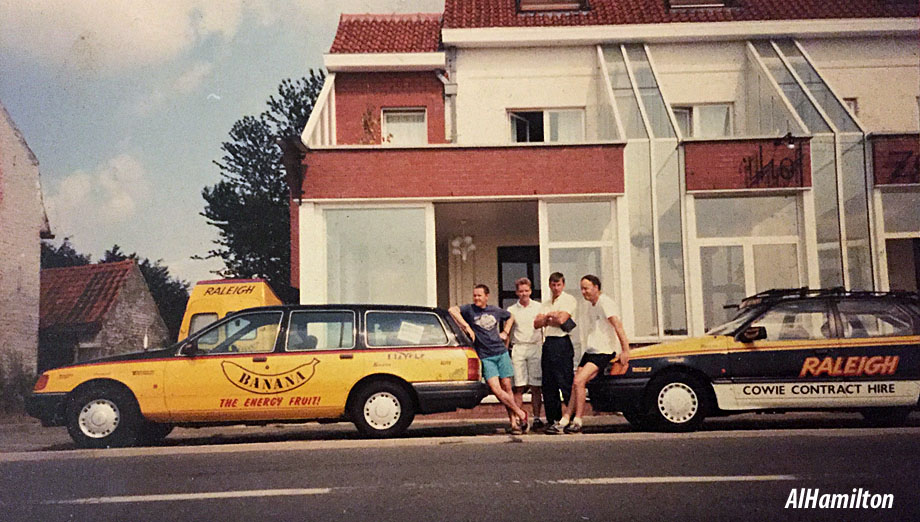 Paul had already started his TV commentary career, but I was getting my own private blow-by-blow account of every race in the backseat of the team car. When we were in England, between races, I would drive the half hour or so to Paul’s house to work on the bikes, build new wheels and stick on new tubs, at no time did it feel like a job, every day was a pleasure. Paul’s mother would come over to do the paperwork for the team and Beaujolais the doberman dog would watch me working. That first month Paul paid me double, he said I deserved it as I had done double the work, he didn’t need to have done that, but that was the kind of guy he was. 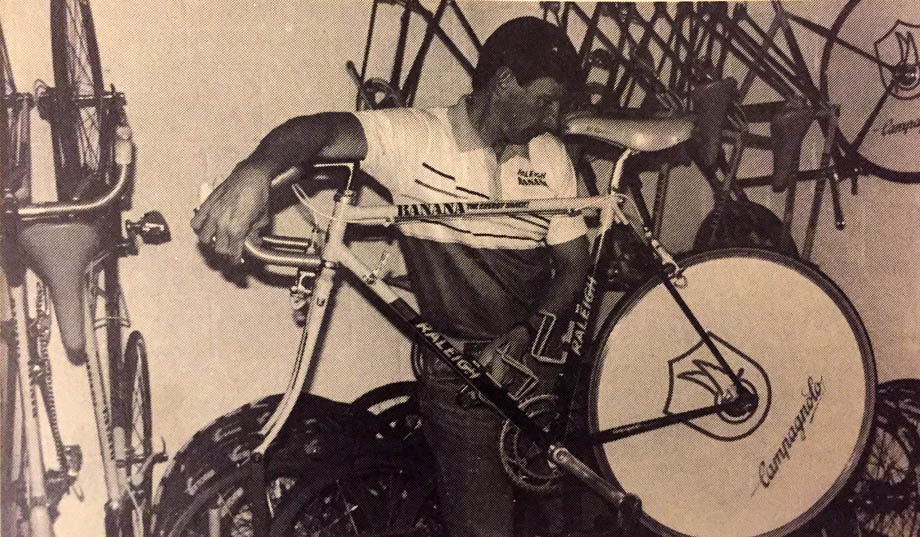 I learnt many things from Paul; not just how to swear in French and Flemish, but how to plan ahead, always have a plan ‘B’ and expect the worst and be ready for it, if it happens. Learning how to follow a race solo in the team car with a pair of wheels on the passenger seat was a steep learning curve. Paul would occasionally ‘leave me to it’ on the finishing circuits and sometimes take the race radio back leaving me in the dark. Luckily nothing ever went wrong. Paul gave me the biggest compliment: “You can tell a good mechanic, he can sleep all day in the team car.” It meant I knew I would have little to do as the bikes were perfect in the morning. The team was run just like the big continental teams, Paul knew no other way, the riders didn’t have to think about anything, except racing their bikes. 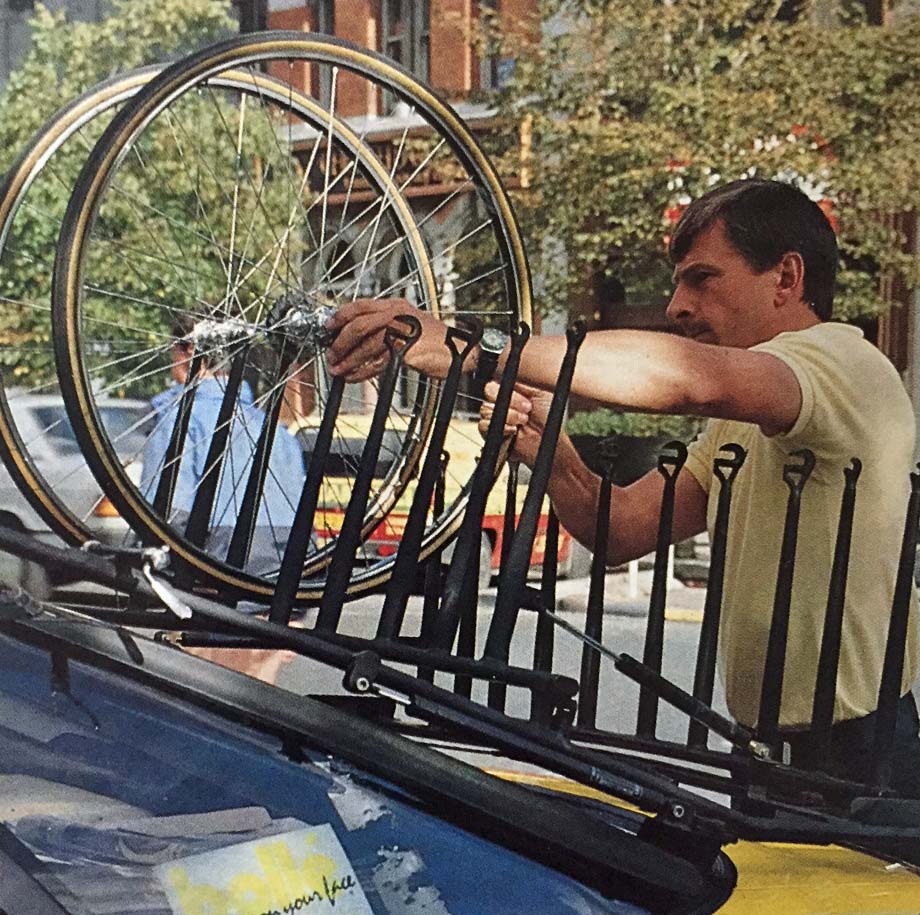 Another day on the road

Everyone knew Paul, from riders, managers, team staff, to the race organisers and everyone respected him, not just as a hard rider, but as a man you could trust. Paul introduced me to many riders and ex-teammates; Stephen Roche and Sean Kelly were big stars, but the guys who really stood out were Serge Beucherie, Patrick Lefevere, Ferdi Van Den Haute and Alain Bondue, all great characters and big friends of Pauls. One occasion at the start of a race in Belgium, Paul said he wanted to introduce me to someone I might recognise, it was Roger De Vlaeminck. I would never have got to know Lucky Luc, the Z-Peugeot mechanic. We became good friends, nearly ran a business together and still are in contact. Plus all the other people I got to know through Paul. 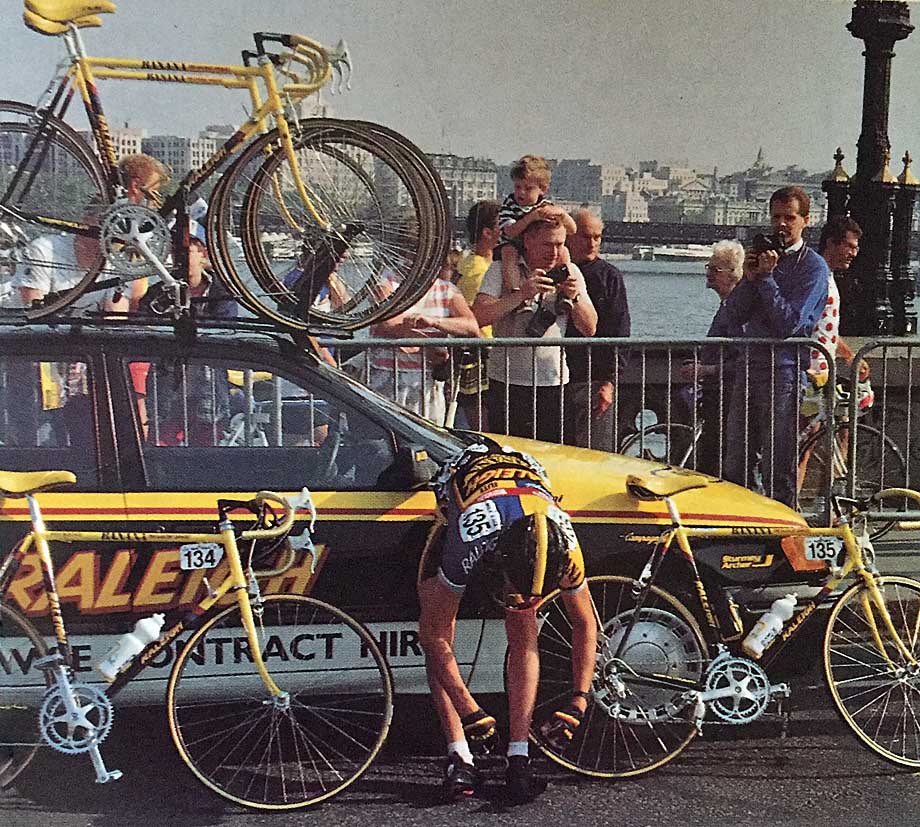 London start for the Milk Race

Paul was to manage the GB professional team at the ’89 World championships and had mechanics and masseurs from the British Cycling Federation, which was good because I had a wedding to go to in Glasgow. I owned a car, but Paul said his BMW needed a good drive, why don’t I take it and not to worry about the fuel, it has a full tank. Again, that was what Paul was like. 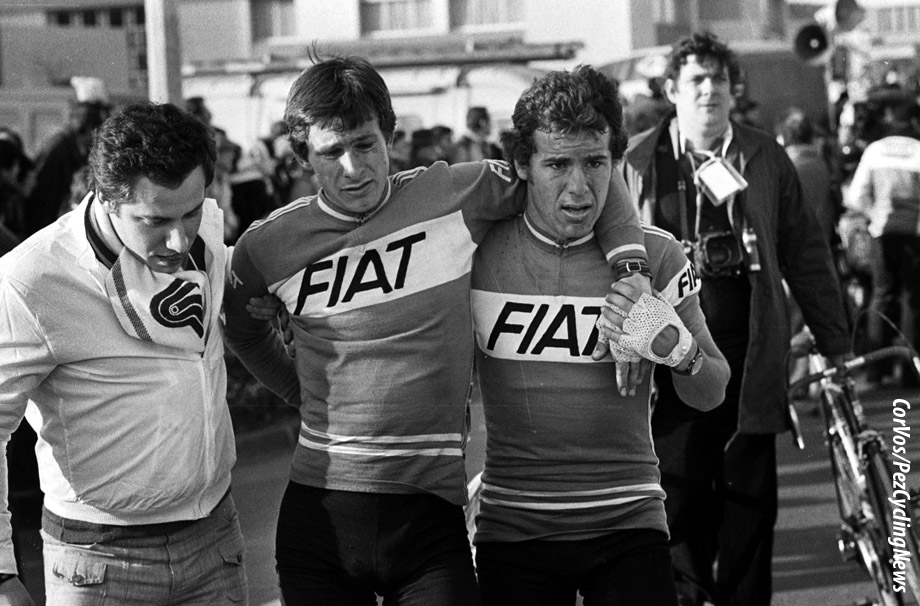 Paul with Serge Beucherie – Rider and team manager both

On June the 7th 1989, Paul’s birthday, the team were in a Scarborough hotel during the two-week long British stage race – The Milk Race. There was a fax from the head of publicity at Raleigh waiting at reception, basically it said there would be no team in 1990, which wasn’t totally true and was a bit much coming from Raleigh as the Banana Marketing Board actually paid more for the team than Raleigh. After that, Tim Harris won the British road championships, Steve Douce retained his British cyclo-cross title and the team won many other races before the end of the season, but Raleigh were going in a different direction. Within a year or so, the British domestic professional scene had practically disappeared. 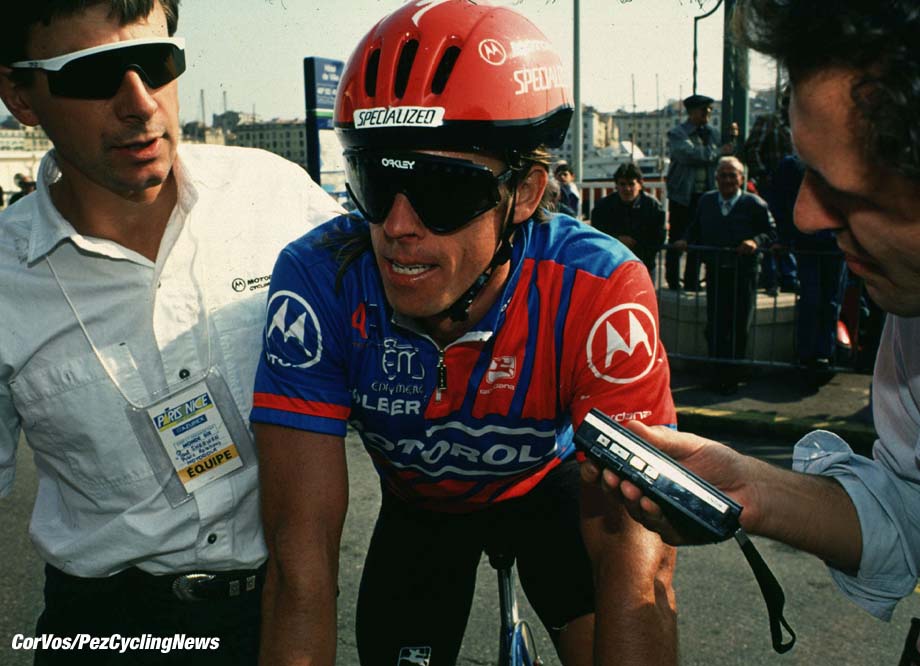 Paul went to work for the Motorola team as press officer and the riders moved to other teams. Raleigh did have a team the next year, but it had road, cross and mountain bike riders. Banana teamed up with Falcon Cycles for many successes. Personally things were not going so well and alcohol and late nights had become a large part of my life. One not so early Saturday morning I was awoken by the phone; it was Paul driving to a race in Belgium, it could have been Kuurne. Paul had heard I needed a ‘kick up the arse’ and after that one-sided conversation, my life changed again – for the better. We kept in contact on and off until I started to write for PEZ, since then there were ‘WhatsApps’ and ‘Skypes’ on a regular basis. The most recent conversation was in October/November, Paul had found an old Raleigh DynaTech bike and we were trying to work out where it had come from. Paul was convinced it was Tim Harris’ bike he had after his National championships win, it couldn’t be, but we will never know. 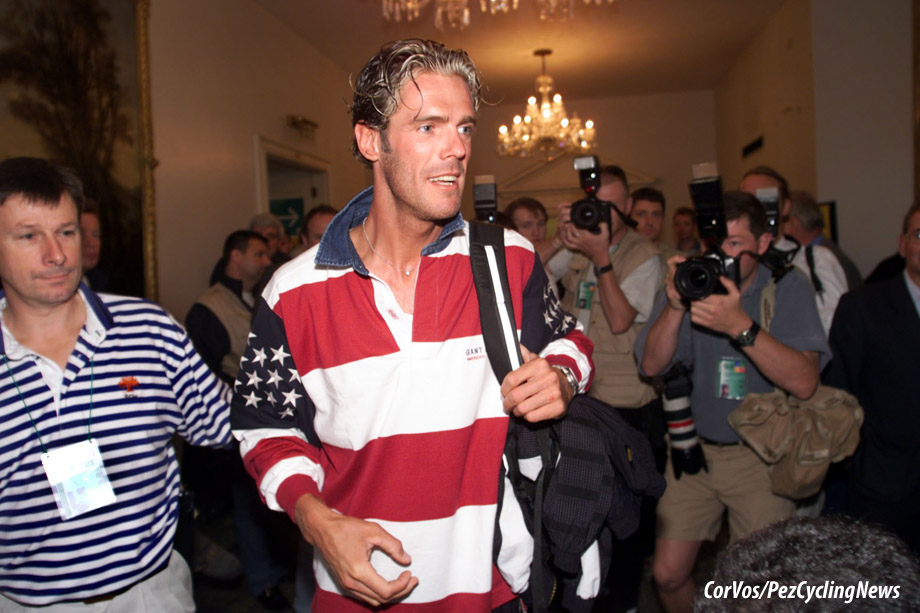 Getting the TV interview with Cipo

There are a lot of stories from races, days spent in the car and all the other days in-between, but there are just too many. The music of JJ Cale, Eddi Reader, France Gall and Johnny Clegg and an appreciation of the beauty of Marilyn Monroe have stayed with me and I probably wouldn’t have taken a holiday in Kenya, all thanks to Paul. 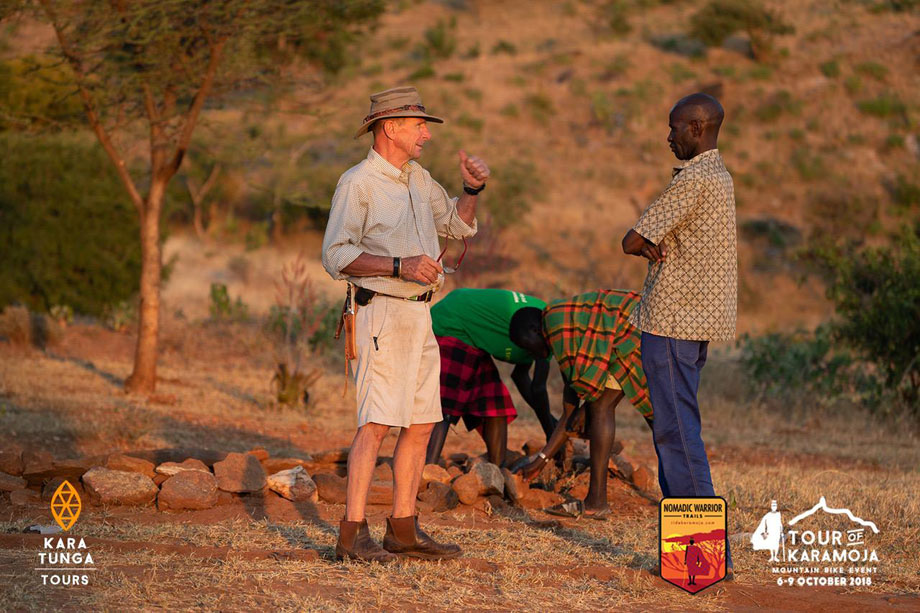 There are many things people don’t know about Paul. Many in the cycling world don’t know about his life in Africa and his work with Bicycles for Humanity, the Ugandan Karamoja area and animal conservation. Most people in Africa have no idea of his status in Europe, America and Australia.

Manchester Cathedral on the 6th of February will be a mix of emotions, but for sure, the World will be poorer place without Paul Sherwen. There are plans for events and a Paul Sherwen Memorial Fund – More news soon. Meanwhile visit ridekaramoja.com to find out more about Paul’s life in Uganda and the place he loved. The Go Fund site is www.gofundme.com/community-empowerment-mt-bike-trails-karamoja.

Goodbye boss, friend and the person who was probably the biggest influence on my life.

The Tour Down Under tribute:

Why is Paul Sherwen not in the British Cycling Hall of Fame?

You can read the PEZ obituary by Ed Hood HERE.