The members of the pro peloton are not usually noted for their intellectual pursuits. Laurent Fignon, considered a mental heavyweight, was nicknamed “le Professeur” because he wore glasses and spent a year in a veterinarian school. For many in the past, cycling was an escape from the coal mines or steelworks, an exchange of one physical labour for another and perhaps the chance for some small recognition and enough earnings to open a bar or bike shop.

“Tomorrow we ride…” is a book of memoirs by Jean Bobet, a French intellectual who seems to have become a pro cyclist simply because of the force of his brother’s personality. That brother, of course, was Louison Bobet, the first cyclist to win the Tour de France three years in a row. Jean was certainly not unskilled as a cyclist (although Papa Bobet was annoyed that petit Jean, at 13 years of age, merely came in second place in his first race) and in fact would win the Paris-Nice stage race.

An entertaining passage in the book describes Jean’s amateur win in 1949 at the road race at the World Student Games in Hungary. He treats it lightly, claiming that 100 spectators lined the streets, but it is clear that he remains proud of this victory. But on his return to France, a reporter says: “Of course, it’s thanks to your brother Louison that you are World Champion,” alluding to the supposed inspirational effects of Louison’s win at the Tour de l’Ouest a few days before – race results Jean had not heard about in behind-the-Iron-Curtain Hungary. No matter how good Jean would be, he was no great star. And Louison Bobet, five years older than Jean, is the sometimes uneasy focus of this book. 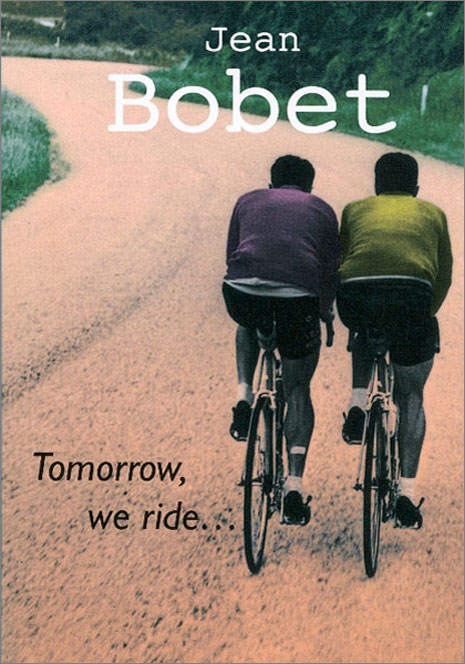 In addition to his three Tour de France wins (1953, 1954, 1955), Louison Bobet was the victor at, among others, Milan San Remo, the Giro di Lombardia, Paris-Nice, the Grand Prix des Nations, the Tour of Flanders, Paris-Roubaix, and was World Champion (professional, not student!) in 1954. He was among the first riders to have a personal soigneur, Raymond le Bret, a physiotherapist who, besides giving massages, booked hotel rooms and helped with strategy. Louison waged war on the roads of Europe against such icons as Fausto Coppi, Hugo Koblet, Ferdi Kьbler, Charly Gaul and Rik van Steenbergen, but also, at times, against French team managers.

He was publicly ridiculed by Renй Vietto as a “crybaby” for his complaining and quitting in his first Tour de France in 1947, but he came back the next year to briefly lead the race. His performance on the road was inconsistent during his career, with memorable wins contrasting with surprising collapses of form. Courteous to a fault, he was nonetheless a strong-minded Breton and when he insisted young Jean come and join his team in 1949, Jean, who loved school, willingly interrupted his studies to join the professional circuit. 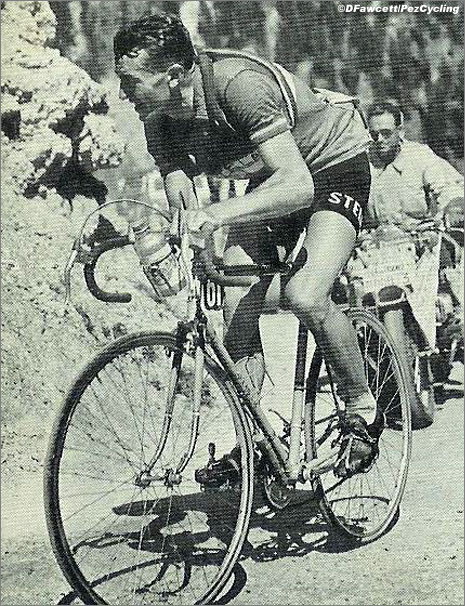 Louison Bobet ascending into the history books on the Izoard. Jean couldn’t match his brother on the road, but he establishes his own place in history in, “Tomorrow We Ride”.

The relationship between the brothers is puzzling. Jean seems to have been as struck with a case of hero-worship as a typical French racing fan of the period and there are times when it is clear he is treated merely as another teammate by his brother. There is a sense of disappointment when, during their first race together at a minor event, Jean knows Louison will not give him the win since that is not what champions do. Champions win. Even on recreational rides late in life, as Louison was dying of cancer, he always had to ride in front.

Nonetheless, the fact that Louison wanted the less-talented Jean on his team indicated a degree of affection (or a need for familial support) stronger than the words on the page indicate. Of course, being the brother of a champion has benefits, as Jean relates the story of how he passed an examination at school when the examiner, on learning he was Louison’s brother, used the opportunity to discuss the repair of tubular tires instead of the subject at hand! 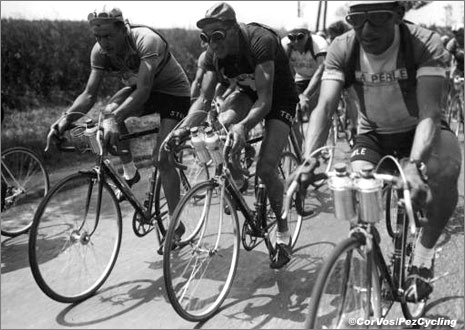 At the end of their racing careers (brought on in 1960 when both brothers were in a car crash near Paris, which is not mentioned in the book), Louison Bobet tried his hand at different businesses, ultimately opening a thelassotherapy clinic in Quiberon, in Brittany, and Jean, who had found employment as a journalist, came to join him, discovering a skill at business management. The brothers opened a second clinic, which uses the supposed, but unlikely, therapeutic effects of seawater, in Biarritz. Louison was not to enjoy a long retirement there, however. He succumbed to cancer at the early age of 58 in 1983.

The book is filled with entertaining stories of what some have called the Golden Age of Racing. There are many high points, but Jean does not shy away from the less appetizing elements of the sport, such as the fixing of races and the prevalence of doping. Although Louison Bobet had claimed to race clean, he did admit, during a banquet of race greats, that he consumed the contents of flasks prepared by his soigneur without troubling about their contents, to the amusement of the other retired racers, who included Jacques Anquetil, who openly had nothing against doping. 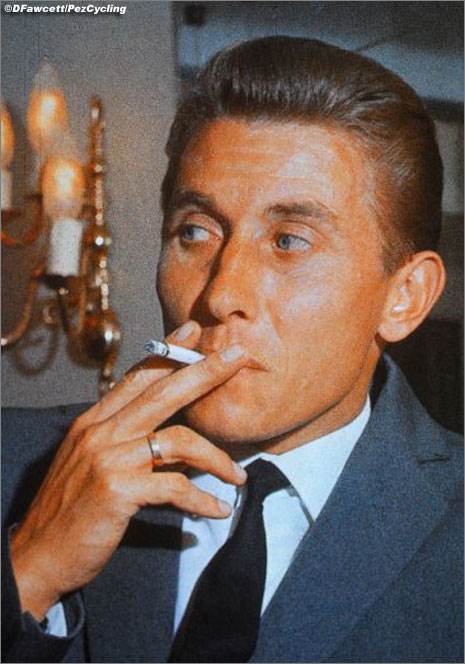 Anquetil was no stranger to cigarettes, alcohol, or drugs.

Jean writes of the one time he tried some amphetamines, near the end of his career, and how they made “uphills seem like downhills,” as he had been promised, but how they also eroded his judgment as he tried to fit into a gap in the peloton–which turned out not to exist–and he landed on the road. Experiment over.

Cycling is like a religion in Brittany but Jean does not confess everything and has left out more than the car crash. He points out that cycling is a sport for ploucs, a Breton word for “country bumpkins,” with both riders and fans being rather unsophisticated types. In fact, the public did not accept Louison Bobet, who was well-mannered, somewhat fussy, elegant in dress and, judging from this book, rather self-focused, in the same way it took to heart other riders such as the weird and rustic Jean Robic (the 1947 Tour de France winner known as le farfadet de la lande Bretonne, translated as “the Breton Hobgoblin,” among other nicknames).

Jean disingenuously and quite unconvincingly describes himself as a plouc. He is an intellectual (he even wears glasses!) and a sensitive writer. There were two sections in the book in particular that are quite lovely. In one, he describes riding in a time trial in the 1953 Giro d’Italia and being overtaken by Fausto Coppi, who started six minutes behind him:

He had arrived. He passed me on the left. He did not notice me. He was riding on a cushion of air. His long legs were whirling round and his hands were on top of his handlebars. He was sublime. I strove desperately to keep him in my sights….This image will never be erased. One day, in a cloud of golden dust, I saw the sun riding a bicycle between Grosseto and Follonica.

Few of us can have experienced this, but in another chapter, entitled “la voluptй,” Jean speaks of what to him is the real joy of cycling. It does not come from the “vulgar euphoria” of competition, but rather from those moments when everything works perfectly:

Its magic lies in its unexpectedness, its value in its rarity…The voluptuous pleasure that cycling can give you is delicate, intimate and ephemeral. It arrives, it takes hold of you, sweeps you up and then leaves you again. It is for you alone. It is a combination of speed and ease, force and grace. It is pure happiness.

Mousehold Press of the United Kingdom is to be commended for adding this atmospheric and thoughtful book of reminiscences, first published in France in 2004, to its extensive list of cycling works.

Tomorrow We Ride…
By Jean Bobet
The Mousehold Press, 2008
Translation by Adam Berry
Pages: 179 plus 22 black and white images
ISBN 978-1-874739-51-7
Available from the publisher, Mousehold Press or online through you-know-who.

When not mentally kicking himself for riding right past the Coppi-Bobet monument on the Col d’Izoard, Leslie Reissner can be found at TinDonkey.com.