Book Review: Bicycle museums tend to be highly eccentric, as perhaps befits this whimsical machine for personal transport and sporting endeavour. We have visited ones in the United States, Belgium, the Netherlands, Germany, Switzerland, and Austria. They often seem to share a certain quality—an existence owed to the compulsions of one individual who let his (never her) collecting mania get somewhat out of hand. Before you know it the collector is anxiously looking for volunteers to help, more storage space and maybe even municipal support. This kind of bicycle collection is different from other transportation museums, which have their Educational Purpose writ large, and its personal quirkiness is deeply attractive because the history of the bicycle itself is nothing if not quirky. And the machines that are so beautifully featured in the Images Publishing book “Bicycling Through Time: The Farren Collection” must rank amongst the most illustrative specimens of that history. 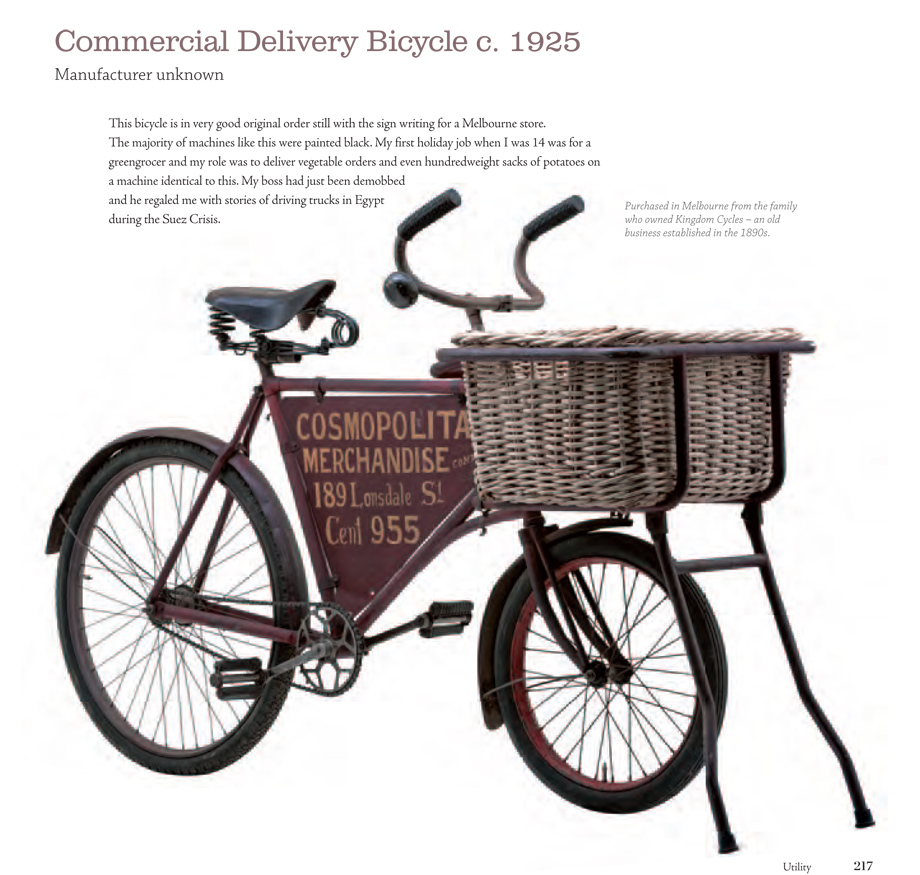 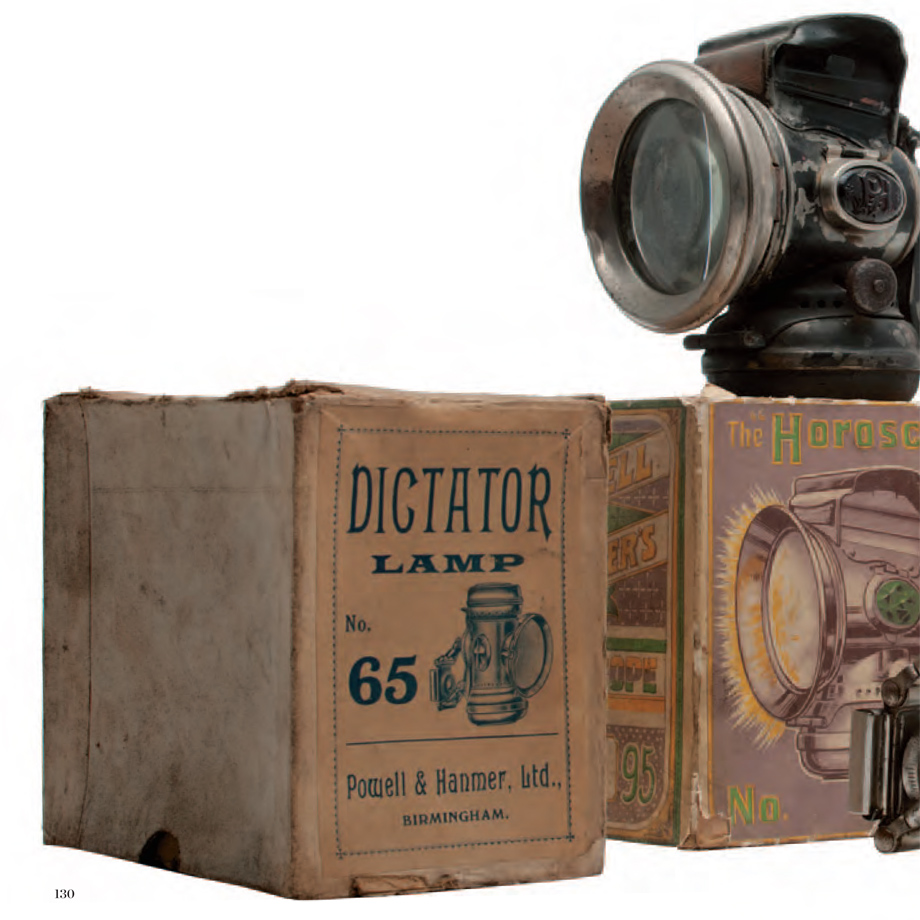 The bicycles so wonderfully photographed by Peter Horsley for “Bicycling Through Time” are in the possession of Australian orthodonist Paul Farren, a veritable Renaissance Man who includes saxophone playing as one of his skills, and his wife Charlie, who is described as having “an unbounded energy for life, especiallylife with a bicycle.” This is a good thing given Peter’s enthusiasm for collecting, which saw the collection move eventually from the front room of their Melbourne home–”the smell of rotting tyre rubber was an unwelcome greeting upon arriving home”–to a nearby warehouse purchased for the purpose of housing the collection. And “Bicycling Through Time” shows us a truly worthy collection of great historical significance. 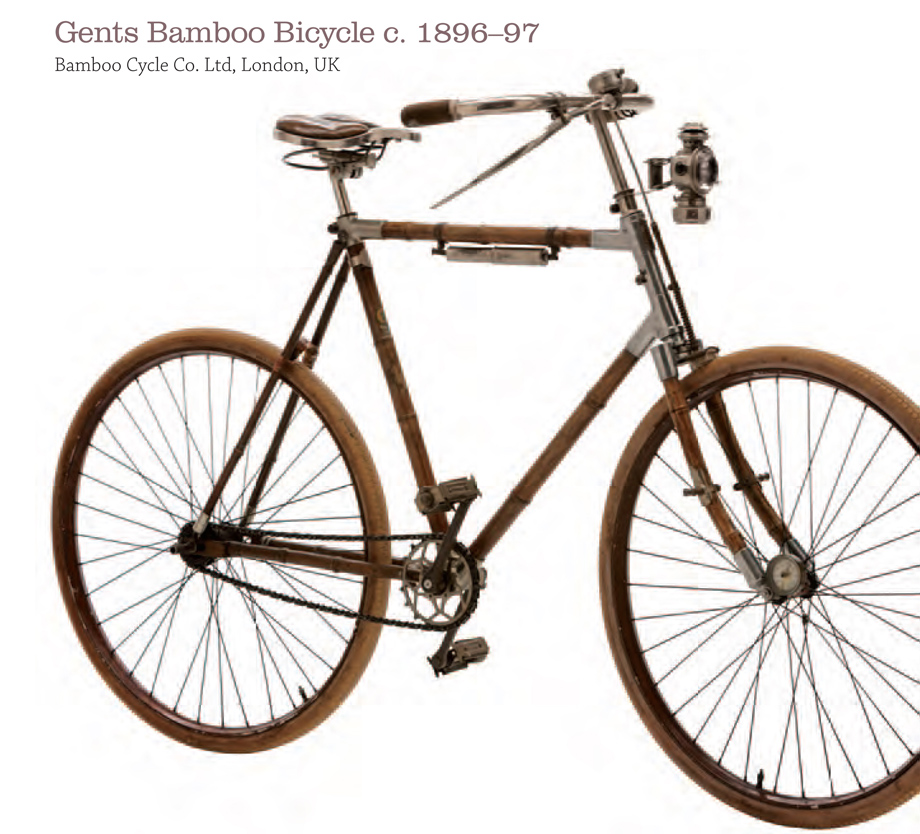 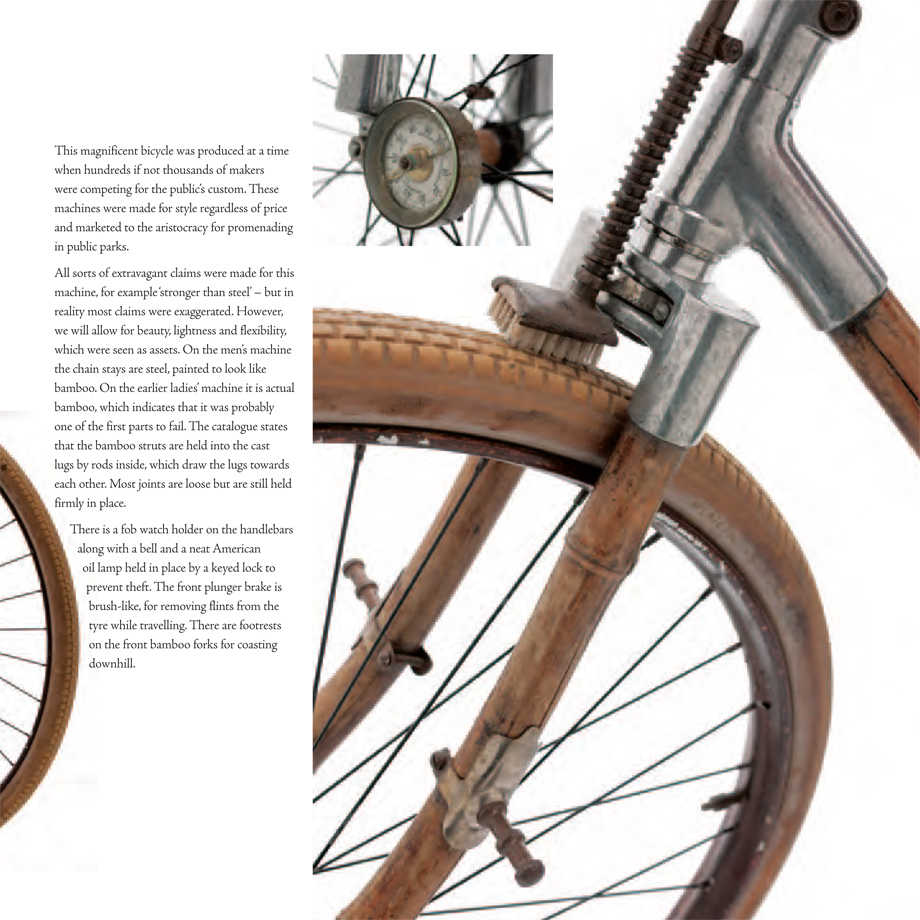 Mr. Farren claims to have around 85 percent of the pre-1900 bicycles in Australia, the result of thirty years of collecting. There are some 160 pre-1900 bicycles, including hobby horses, boneshakers and high-wheelers, as well as early 20th-century models extending up to some novel military bicycles of World War II. This has taken him all over the world and he has purchased individual examples as well as entire collections. He notes drily that there are specific reasons that vintage bicycles come up for sale: an acrimonious divorce; a new collecting passion (usually cars); a better version of the same machine; and, ultimately, lack of interest of death. In a situation faced by all collectors family members usually do not share the same passion for bicycles (or cars or thimbles or tea caddies or big balls of string) of the deceased collector. 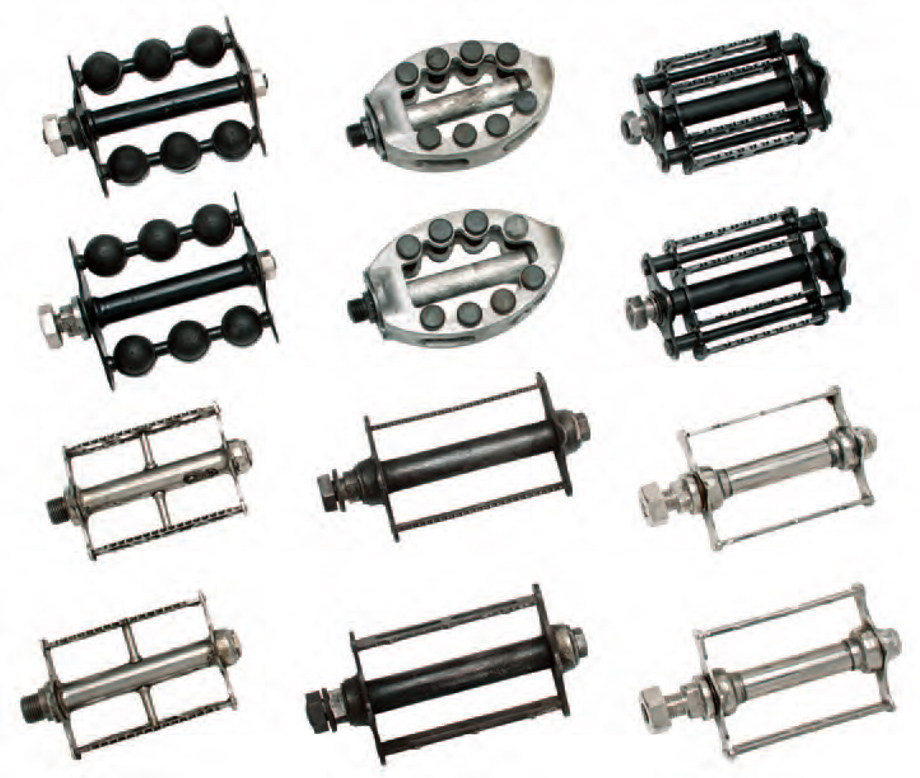 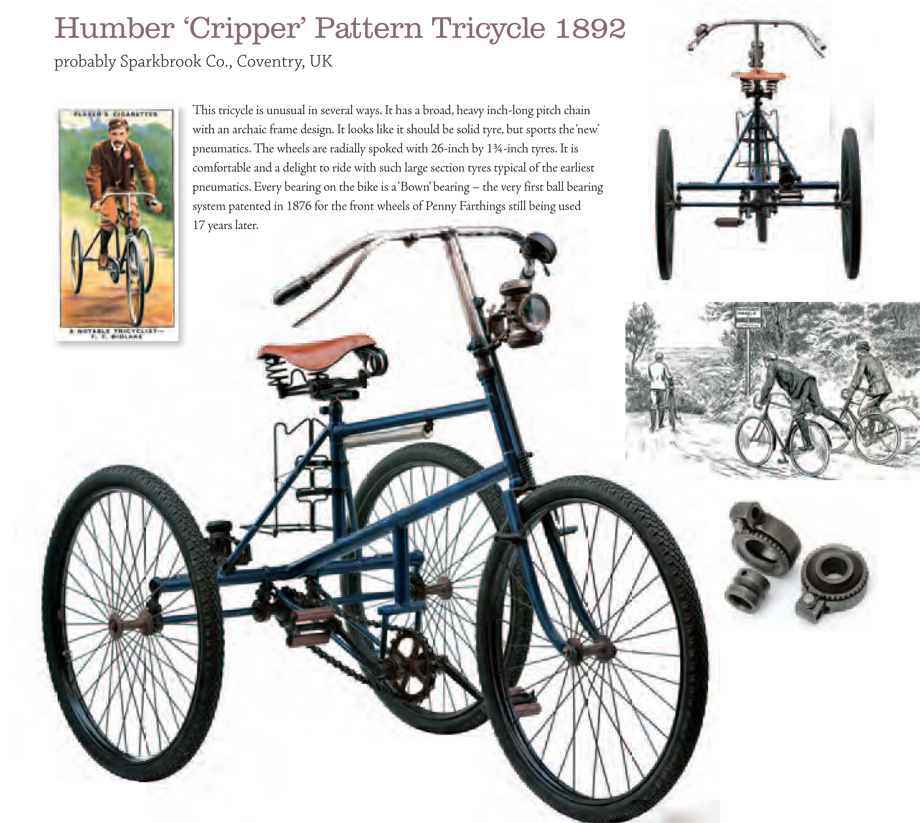 The Farren Collection, which is not open to the public generally, aims to chart the development of the bicycle and its progression from impractical plaything of the wealthy to utilitarian mode of transport of the masses. There are interesting sidebar comments throughout the book about the acquisition of the example and reflects Mr. Farren’s impressive knowledge of the technical minutiae of these remarkable machines. 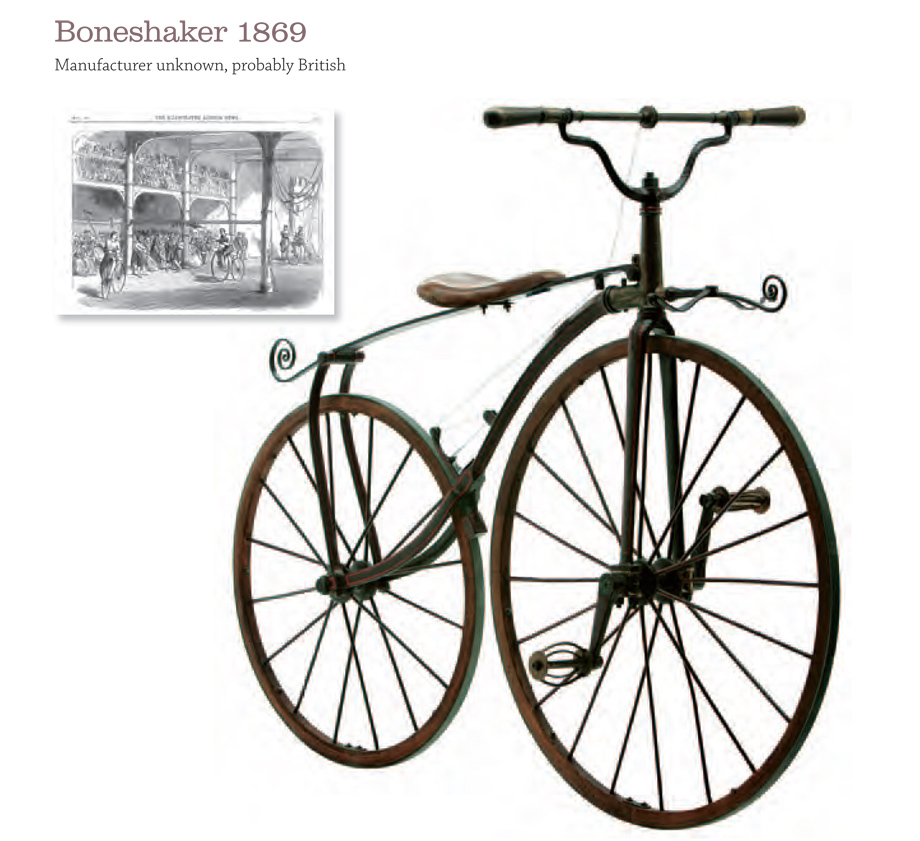 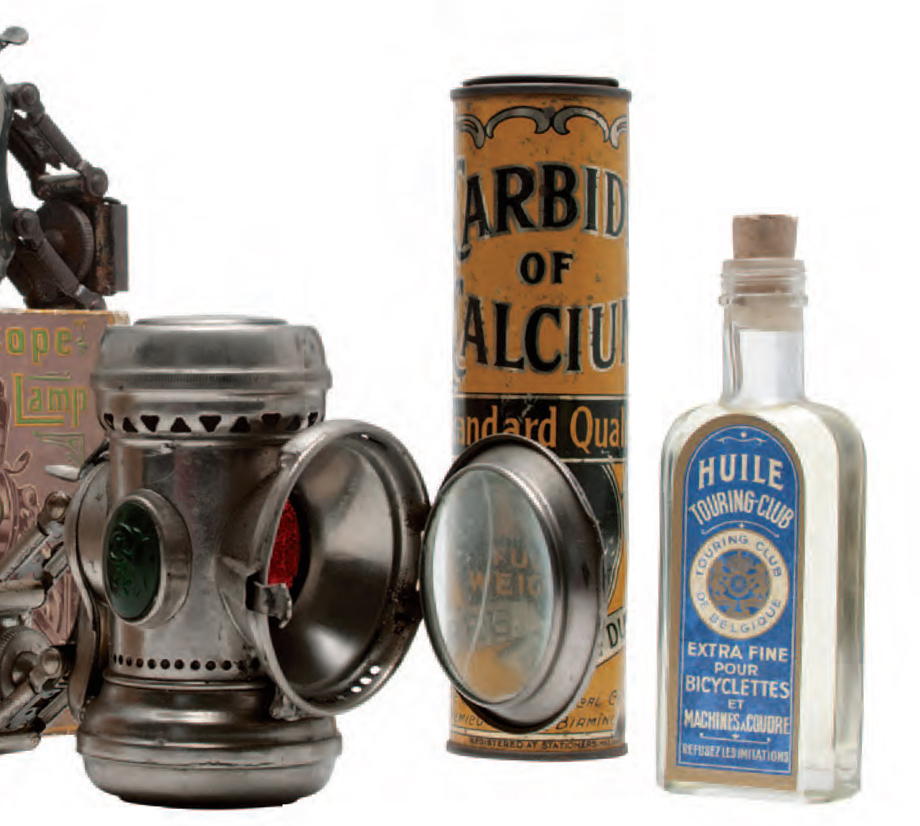 The book is divided into nine sections highlighting a particular theme. They are: Mobility for the Nobility; Speed; Comfort; Safety; Togetherness; Drive Mechanisms; Utility; Army; and Restoration. This is a novel way to arrange the collection and is a happy alternative to the usual chronological sorting. The book illustrates 82 machines but a full list of all 200+ is included. 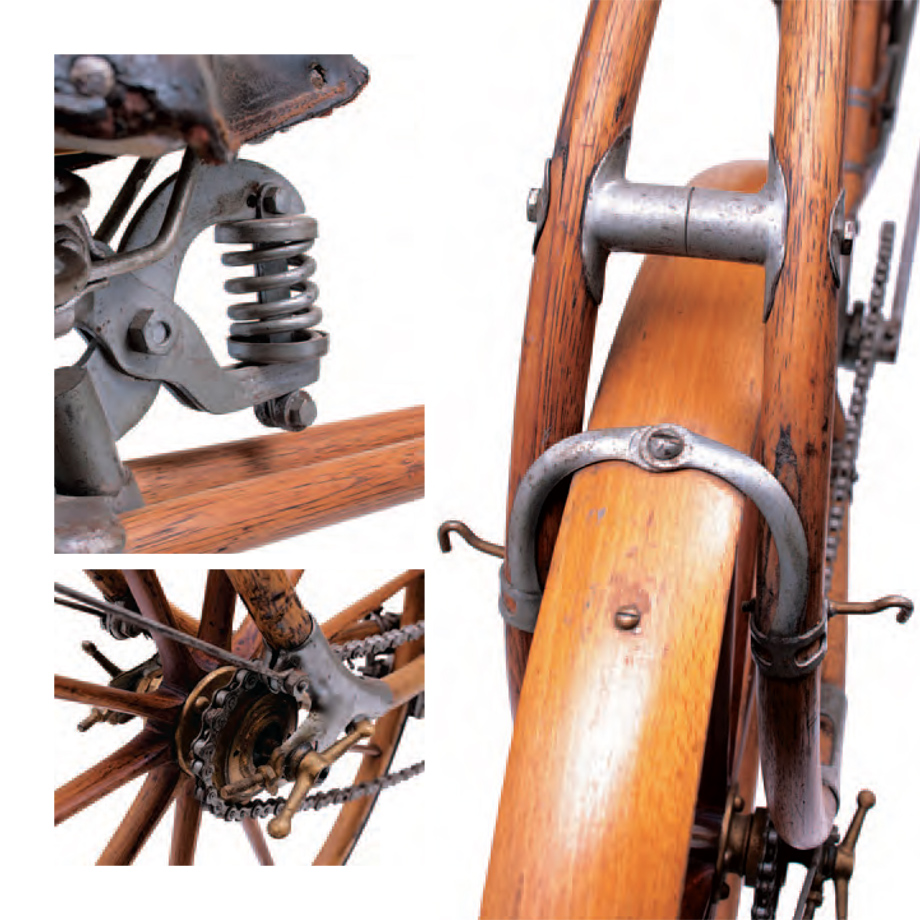 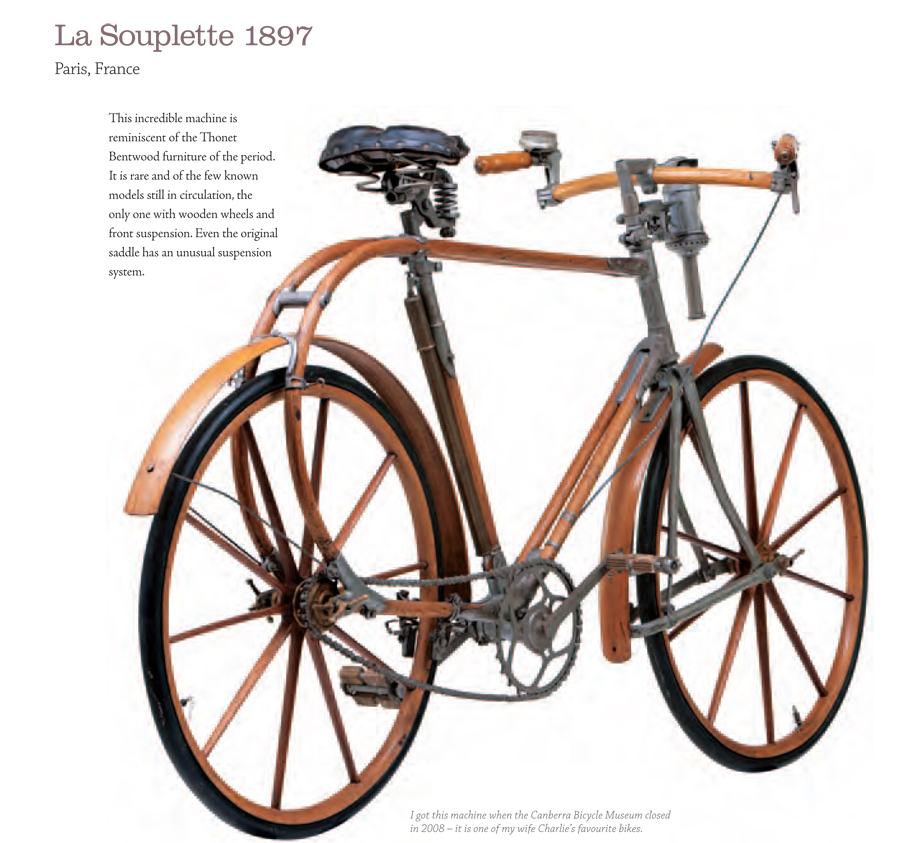 The book opens with a lovely replica of an 1819 Denis Johnson Hobby Horse whose basic parts were supplied to Farren by Canadian Mennonite woodworkers, parts which were subsequently carved, ground and painted by the collector himself. As is the case for all the bicycles show, the excellent photos are spread over two pages and feature several close-up images and often an historical one as well. 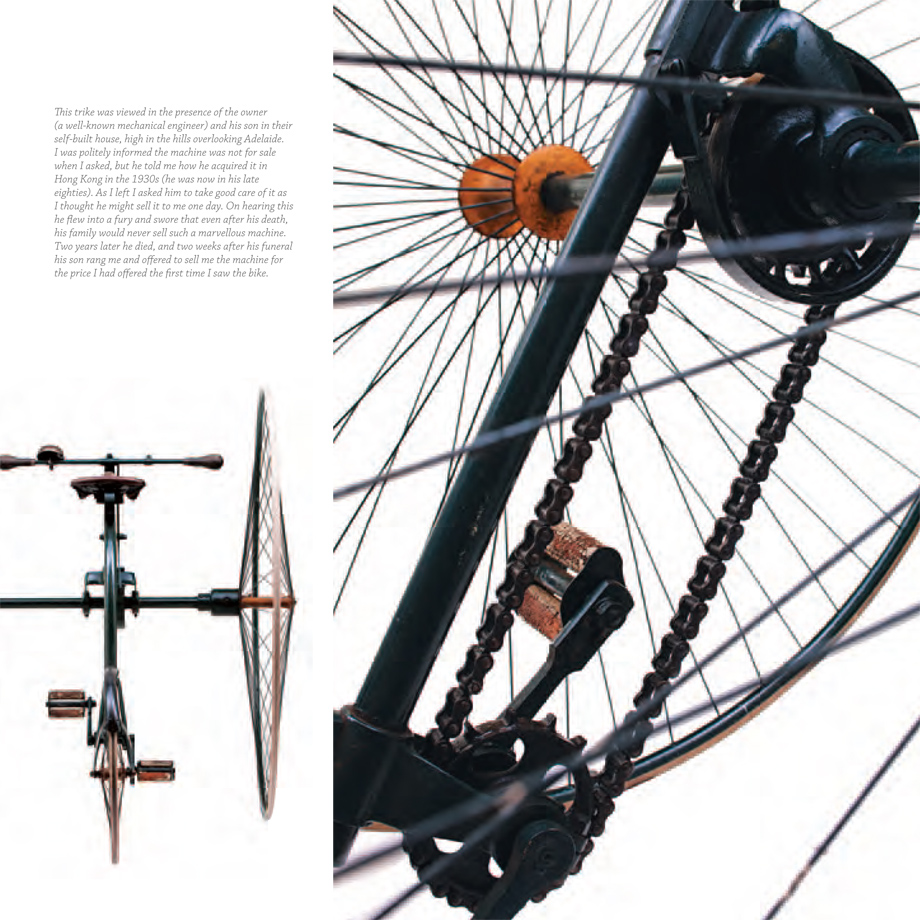 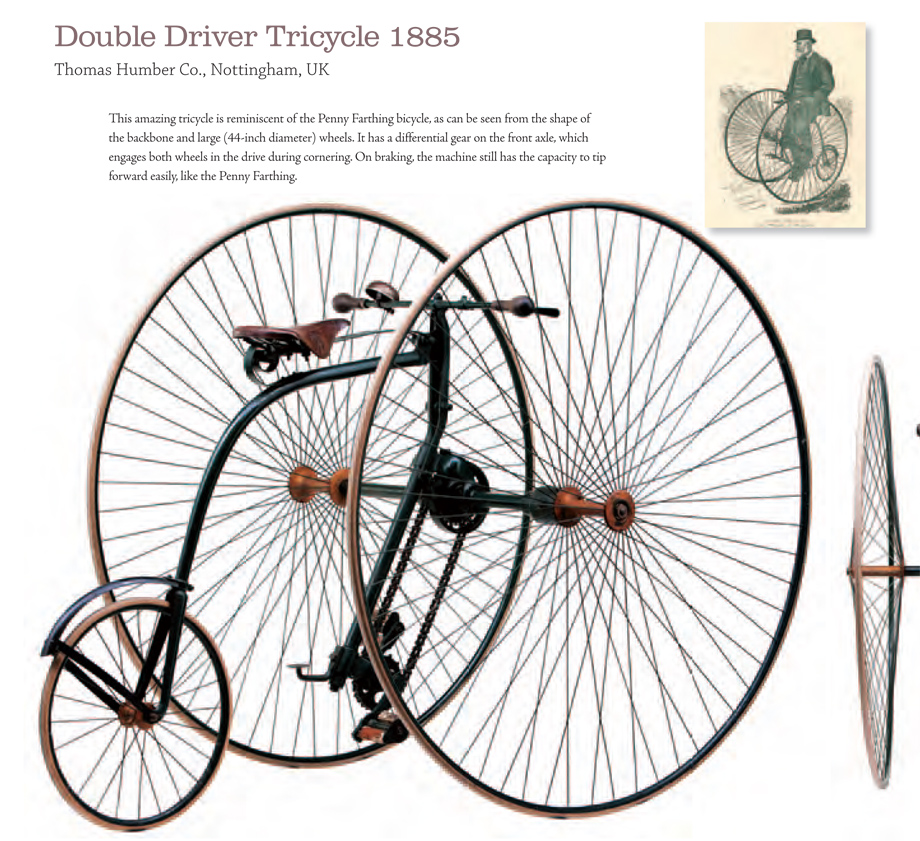 We live in an age where bicycles are distinguished primarily by their paint jobs but before 1900 there were no bounds on the imaginations of inventors. (See also our recent review of “Bicycle Design”). Mr. Farren’s collection is filled with astonishing tricycles (including everyone’s favourite Coventry Rotary Convertible Tandem Tricycle), boneshakers, safety bicycles (divided into Highwheel Safeties, Solid Tyre Safeties, Pneumatic Bicycles), high-wheelers/Penny Farthings and even a Goldmine Rail Quadricycle. 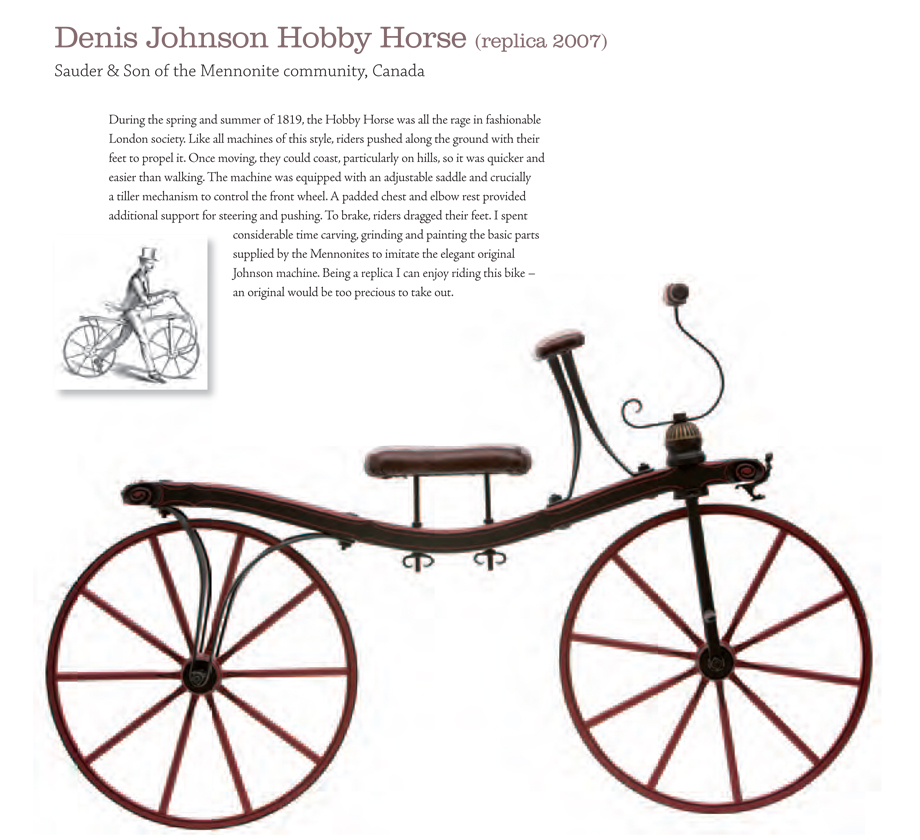 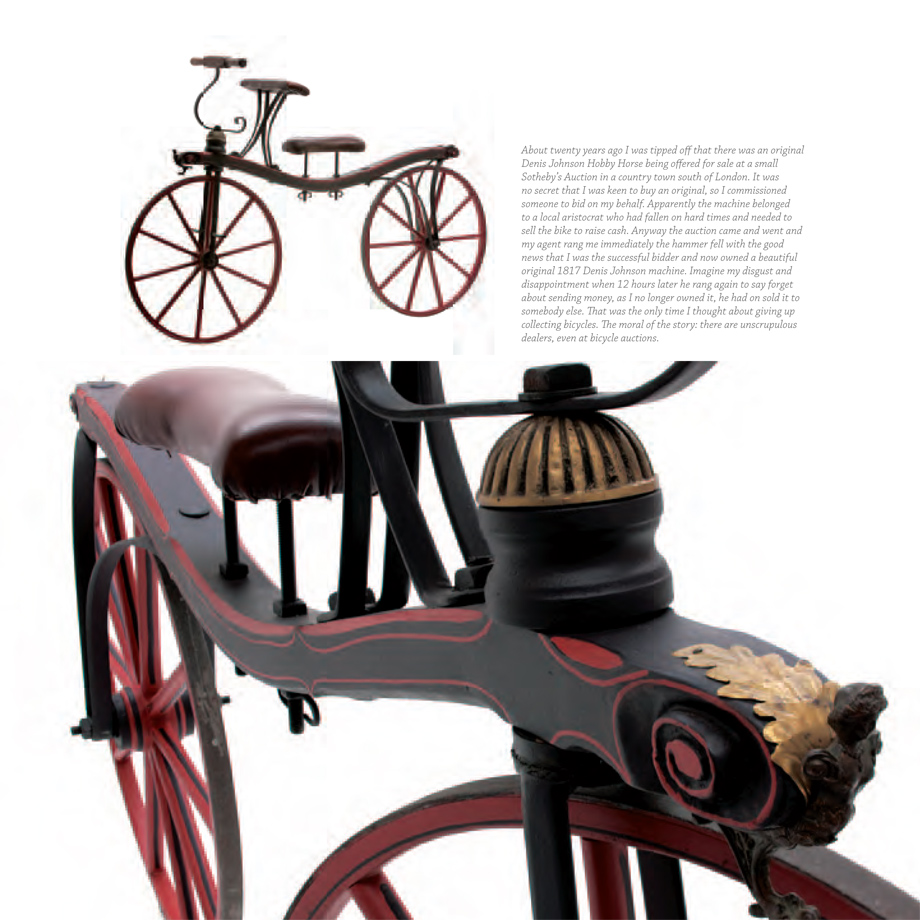 There are many exceptional rarities here. The cover photo shows a wooden French bicycle, the La Souplette of 1897, with wooden wheels and a front suspension, as well as an unusual suspended saddle. It is apparently a favourite ride of Charlie Fenner. 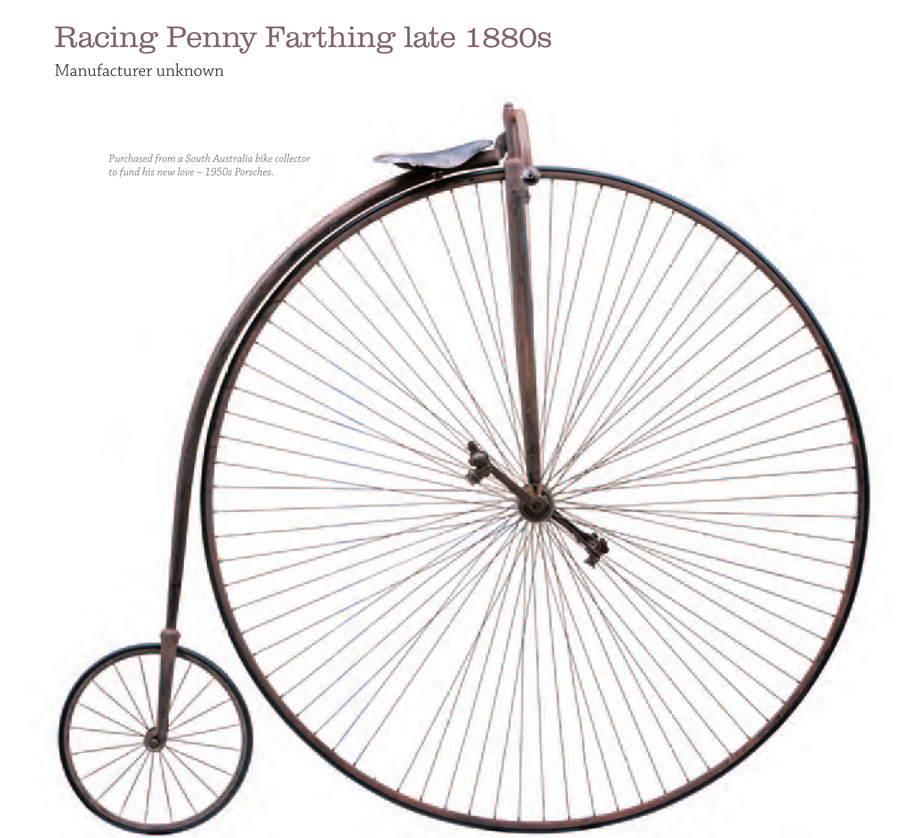 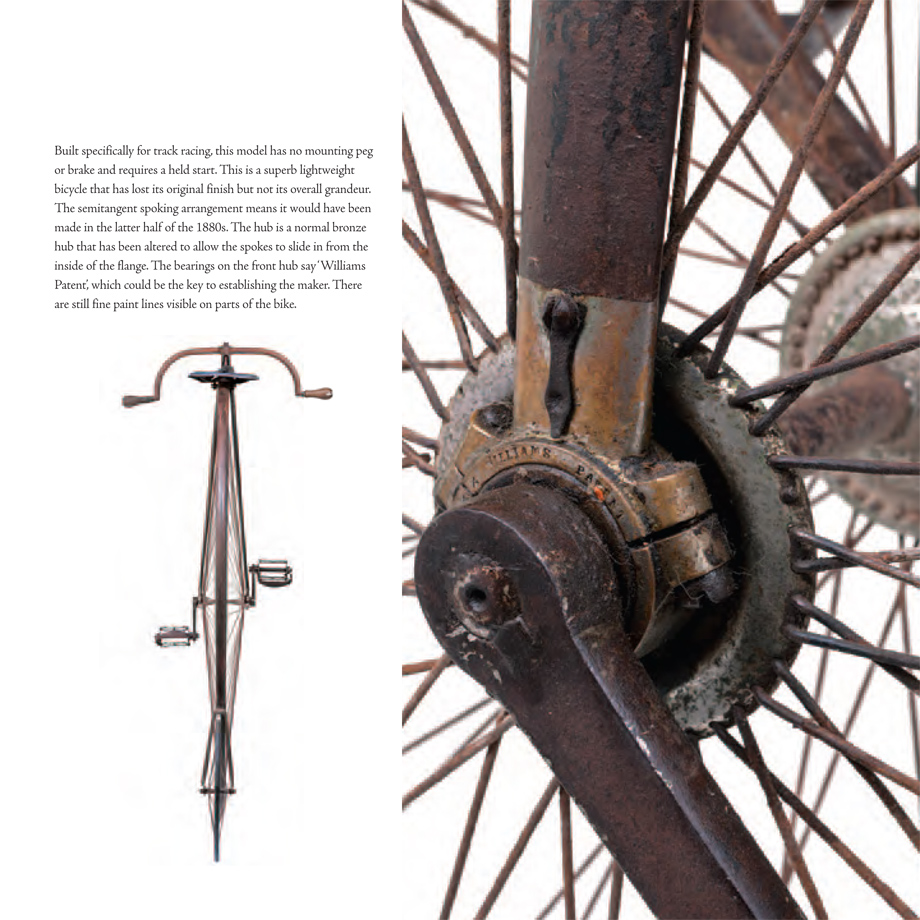 In addition to the quality of the collection portrayed, this book is unique for the superb photographs, its elegant layout and the very interesting comments about restoration versus renovation. Mr. Farren writes about how he bought just about everything that came his way, not expecting the perfect complete machine to appear, but also that he “wanted the bicycles to be rideable, able to be loaned and used on heritage rides and parades. This did mean sacrificing tyres and inner tubes and eventually saddle tops.”
Management of his collection has meant that he has experience in many black arts, such as casting and forging, brazing and soldering, lathe work, milling, grinding, leather work, painting—and a special expertise in the disassembly of rust-frozen parts. 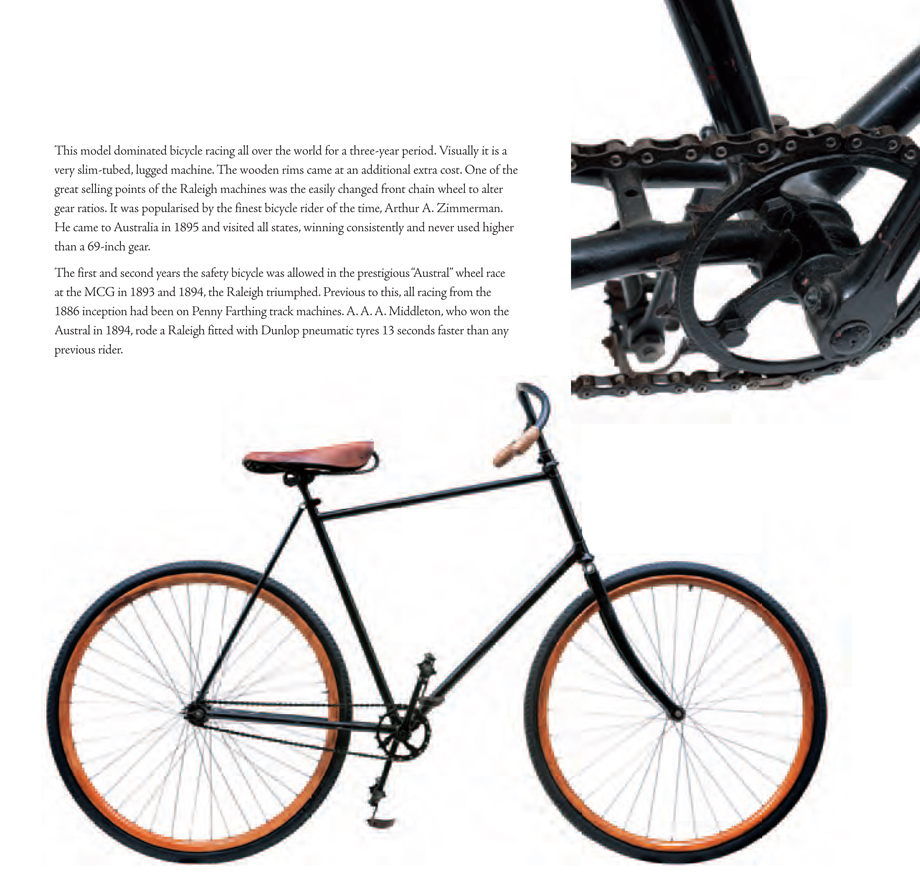 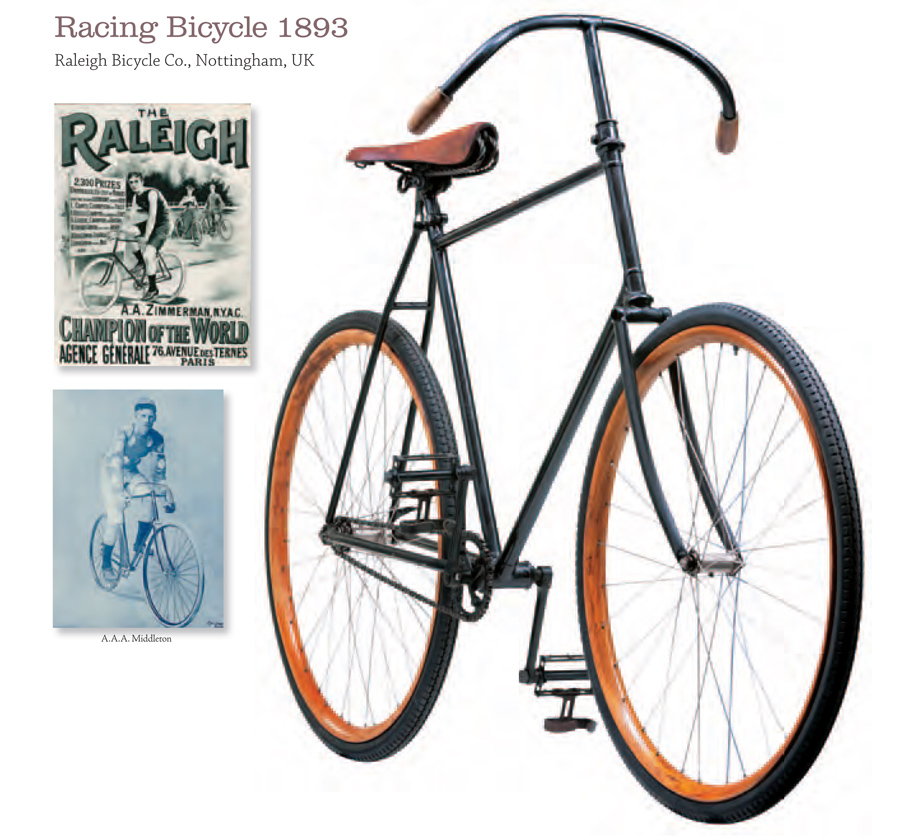 Until this book arrived, my favourite vintage bicycle book was the 1998 Flammarion Press volume devoted to the Pryor Dodge collection but now “The Bicycle,” while still highly recommended, has surely met its match in “Bicycling Through Time.” There are, to my knowledge, no state museums that have a bicycle collection of this range and value. Velorama in the Netherlands is a collection comparable in many ways but we must salute the Farrens for raising the standard of bicycle collecting to the ultimate level of eccentric beauty. 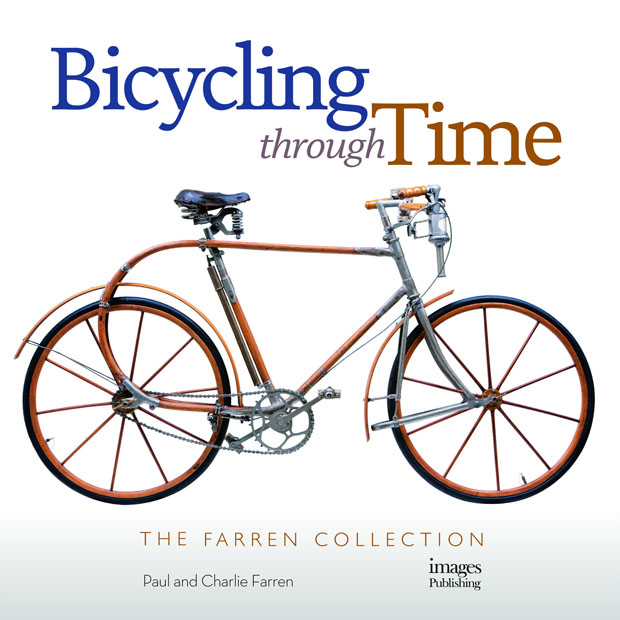 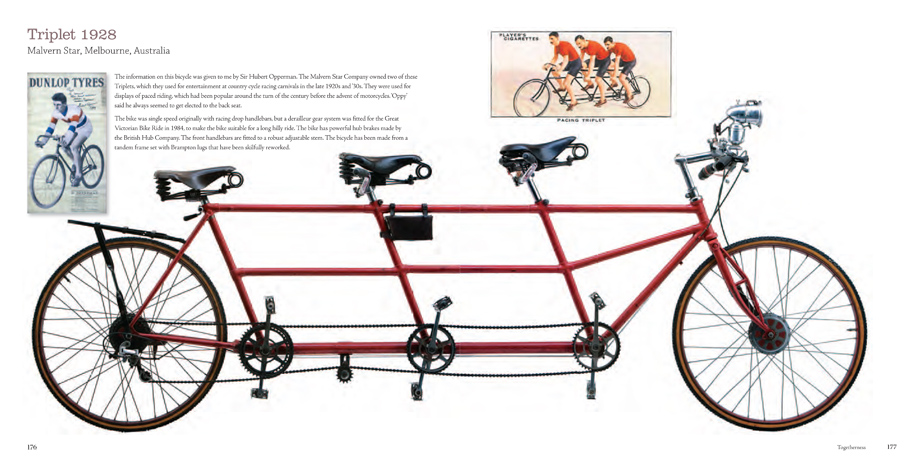 When not contemplating retracing that the first long distance bicycle ride of nearly 10 kms (and return) from Mannheim to Rheinau that took place on his birthday but in 1817, Leslie Reissner may be found shaking his bones at www.tindonkey.com.

Team Rally: ‘We Are Going To Race’