PEZ Bookshelf: A Return to Richmond!

After his attack on the Tour of Sufferlandria, Leslie Reissner has turned back to his more normal position on the PEZ staff as our culture editor to review a great book of paintings from the World championships in Richmond by Greig Leach. Some of you may have seen Greig’s previous books illustrating the Classics, Tour, Giro and other cycling and non-cycling events, but if you were in Richmond last year this book is a must.

The 2015 World Championships in Richmond, Virginia, were a success by any measure. Over the nine days of racing in September, an estimated 645,000 spectators from 29 countries and 34 US states enjoyed watching the world’s best compete in the Old Dominion’s capital city. Yes, there was a positive economic impact of some $170 million generated but to us the success was in the exciting events. In particular the last two days saw popular and deserved wins by the elite women and men. And the rain, forecast for the whole weekend, never appeared. Great memories and now we have a book by the Official Artist of the Richmond Worlds to remind us of them. 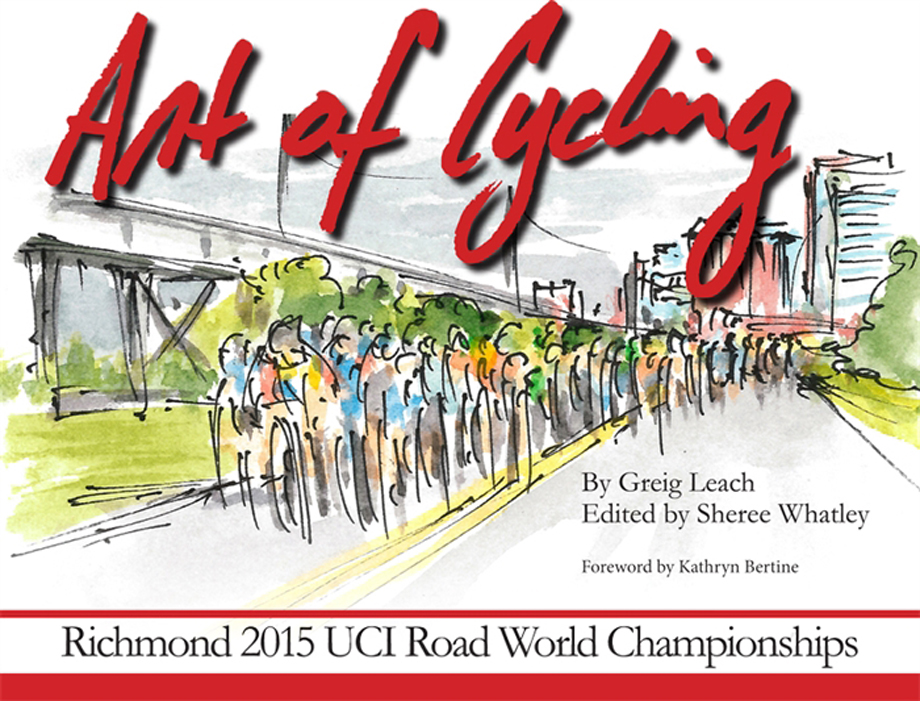 “Art of Cycling: Richmond 2015 UCI Road World Championships” is the latest book by Greig Leach, whose previous “Book de Tour” was reviewed here a year ago. (LINK: https://pezcyclingnews.com/features/pez-bookshelf-book-de-tour/#.VuCrl9BlxQE) Mr. Leach’s remarkable skill is in rapidly painting cycling action scenes in real time, capturing events in bright watercolours and rapid motion. He has the artist’s eye for drama and composition and a cyclist’s feeling for the spirit of racing. All of the artworks in the new book was created live in the FanFest area of the Richmond Convention Center, using video feeds from race organizers, allowing the artist to interact with race fans and many of the cyclists. And meet Tony Martin’s mother!

Mr. Leach was involved early on in the Richmond event, creating an image for a Christmas card in 2013 and then participating in a series of art exhibitions highlighting his cycling images. Fourteen of his previously completed watercolours were turned into a 280 foot long mural that was included on the course.

The book, with a foreward by race participant and women’s cycling advocate Kathryn Bertine as well as greetings from the event CEO and the Mayor of Richmond, is divided into twelve chapters, each covering one of the races. Every category—road races and time trials—for the Elite Men and Women, Junior Women and Men and U-23 Men receives its own section. The artist starts each chapter with a map, then a series of paintings of the race and ends with the winners’ flag or jersey. 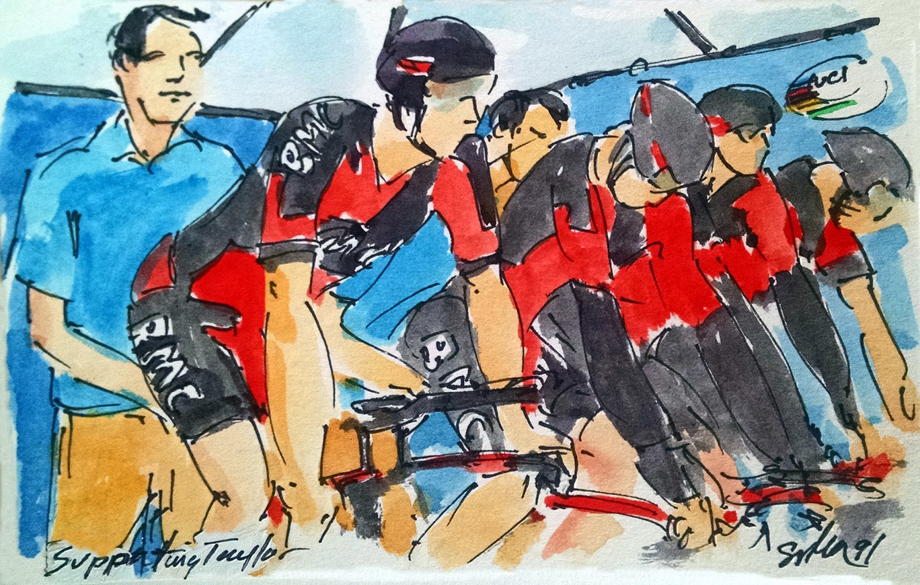 Each of the race scenes is captioned with interesting comments by the artist. A celebration of the event that brought the world to Richmond means more than big stars are covered. We learn of the young Rwandan racer who enjoyed his first-ever visit to an art museum; we see the proud blue of the traditional azzurri jersey of a young Italian as he slows down on the cobbles making a wide U-turn in front the of Jefferson Davis Monument; we are impressed by the improbable but appropriate handlebar moustache of Denmark’s Rasmus Quaade as he leaves the start house in the Elite Men’s time trial. 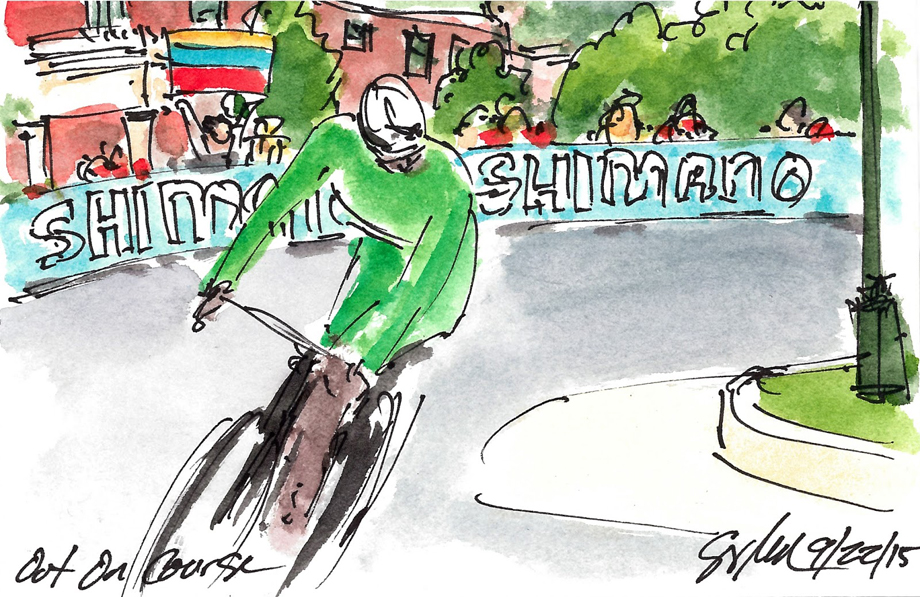 Not blessed with Alpine vistas or Renaissance architecture, the race organizers were up to the challenge of making the course interesting by the inclusion of a cobbled climb up Libby Hill, followed by a drop
down Church Hill before the brutal 18% average cobbled climb on 23rd Street. These hills would see huge crowds of spectators as the week went on. 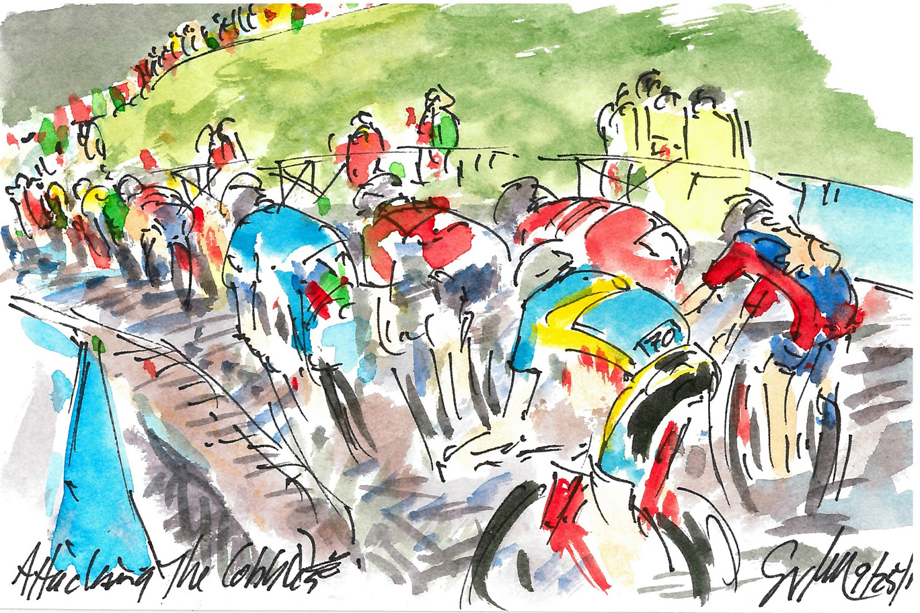 During the Junior Men’s Road Race, Germany’s Leo Appelt, who earlier in the week won the time trial for the Juniors, had a mechanical problem at the base of Libby Hill and, unwilling to wait for neutral service support, shouldered his bike and ran up the cobbled hill, shadowed by a race official on a motorcycle. This cyclocross moment was captured superbly by the artist. 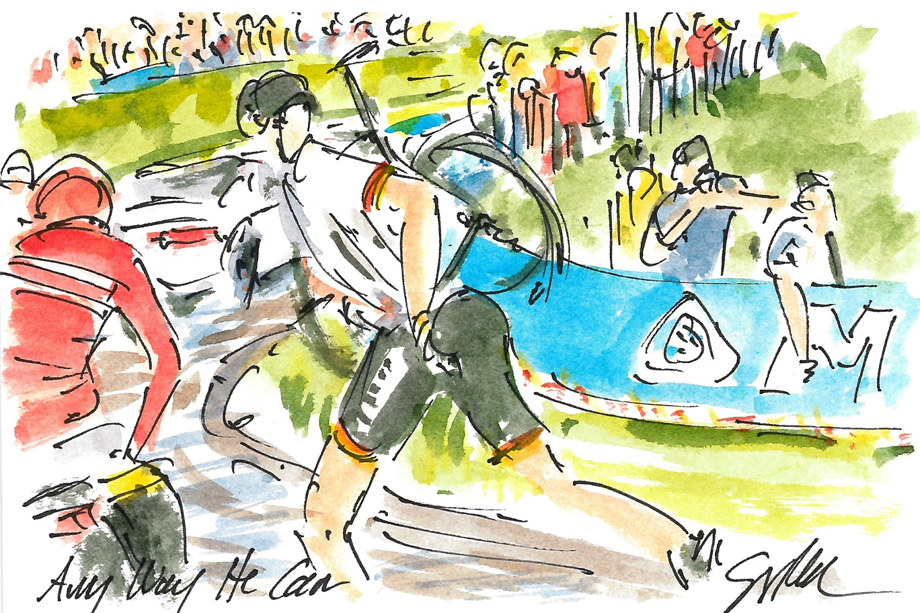 A problem presented itself in that the races featuring the Junior Men’s and Women’s teams were not televised, which is difficult for someone drawing events live from video. Luckily several fans messaged their photos from the course to Mr. Leach, who was then able to paint the races and Leo’s run up Libby Hill is there forever.

No issues about broadcasting with the final two races of the week as the top pro racers chased on the cobbles and around the monuments. Lizzie Armitstead led a group of eight in the Women’s Elite race on the final finishing straight but there was no repeat of the 2014 Championships in Spain when none of the four leaders would commit to the sprint and were overtaken by the peloton. The British rider turned on the power to win the sprint by half a bike length. 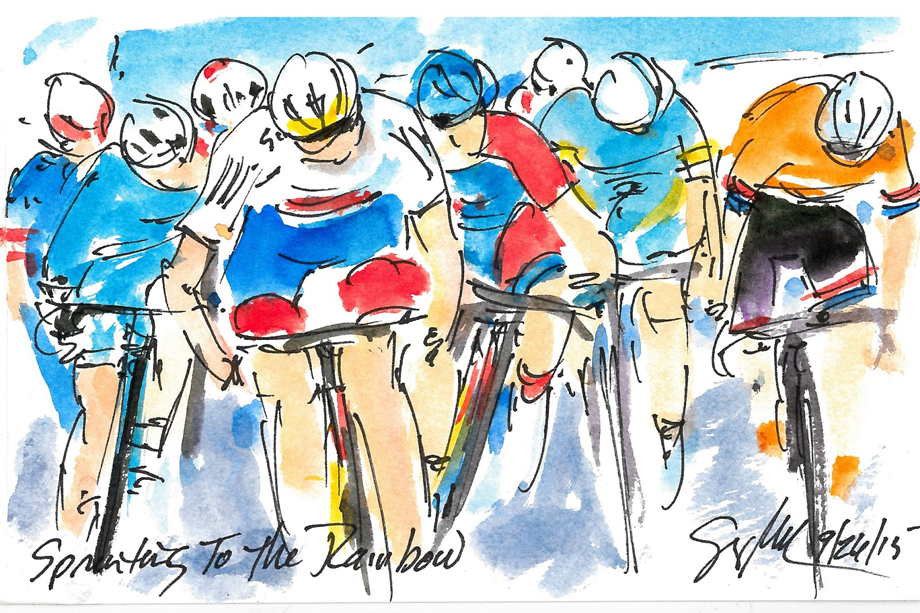 The crowds were massive for Sunday’s finale, the Men’s Elite Road Race. The hometown fans were thrilled as Virginian Ben King animated the race early on, at one point leading a small group four minutes ahead of the peloton. 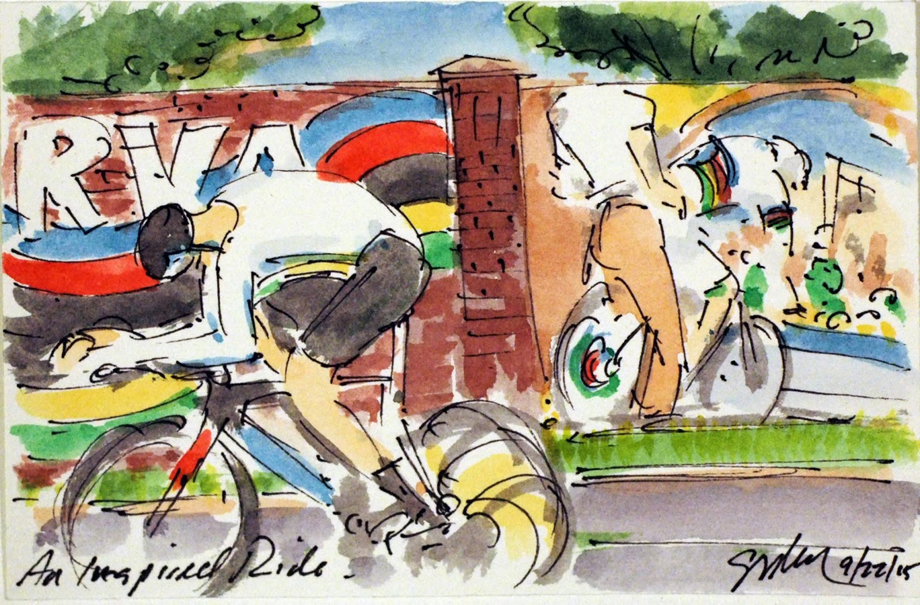 Americans were evident in a number of early breaks but eventually the European squads—first the Germans, then the Belgians—exerted their strength and with the final few laps attacks and counterattacks began. The cobbled hills decided the race in the end as Peter Sagan timed an attack at the base of the 23rd Street hill perfectly and rode to a powerful finish to the delight of the crowd. 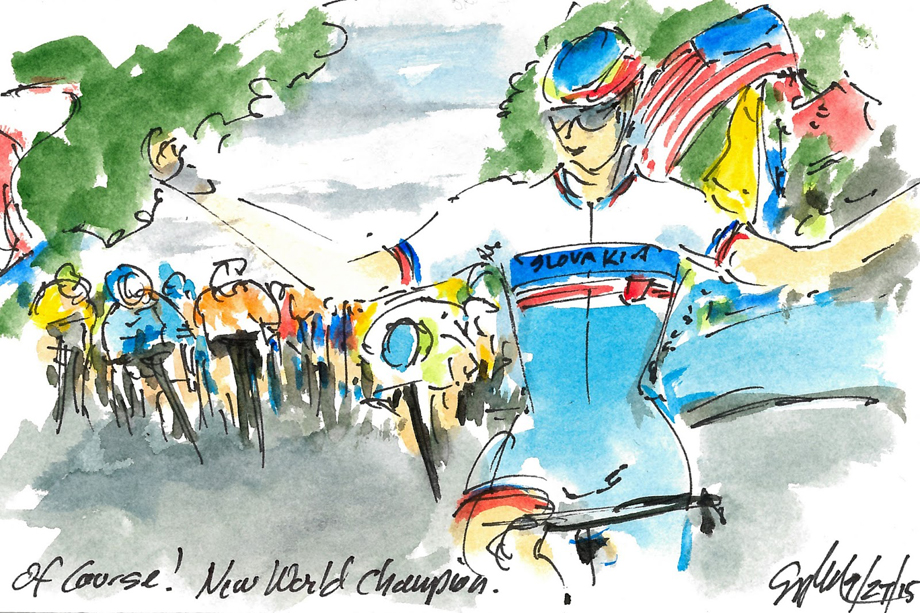 This was only the second time that the United States hosted the UCI Road World Championships. In a place more attuned to football, basketball or NASCAR racing, there were doubts expressed about how well this would work out but Richmond turned on the Southern Hospitality. More than 7,200 volunteers took the time to help and host families offered 100 more beds than were needed in the end to the visiting racers. The local newspaper named the races as the Highlight of the Year in the city and leafing through “Art of Cycling” and reading the affectionate commentaries under the charming images one can easily understand why. For those of us who were present the book is a chance to relive a great event; if you were not there it is an opportunity to enjoy it fresh.

When not fuelling his morning ride with a big bowl of stone-ground grits, Leslie Reissner may be found lounging on the piazza at www.tindonkey.com, y’all.

Jelly Bean Dreams: My First Week As a Pro