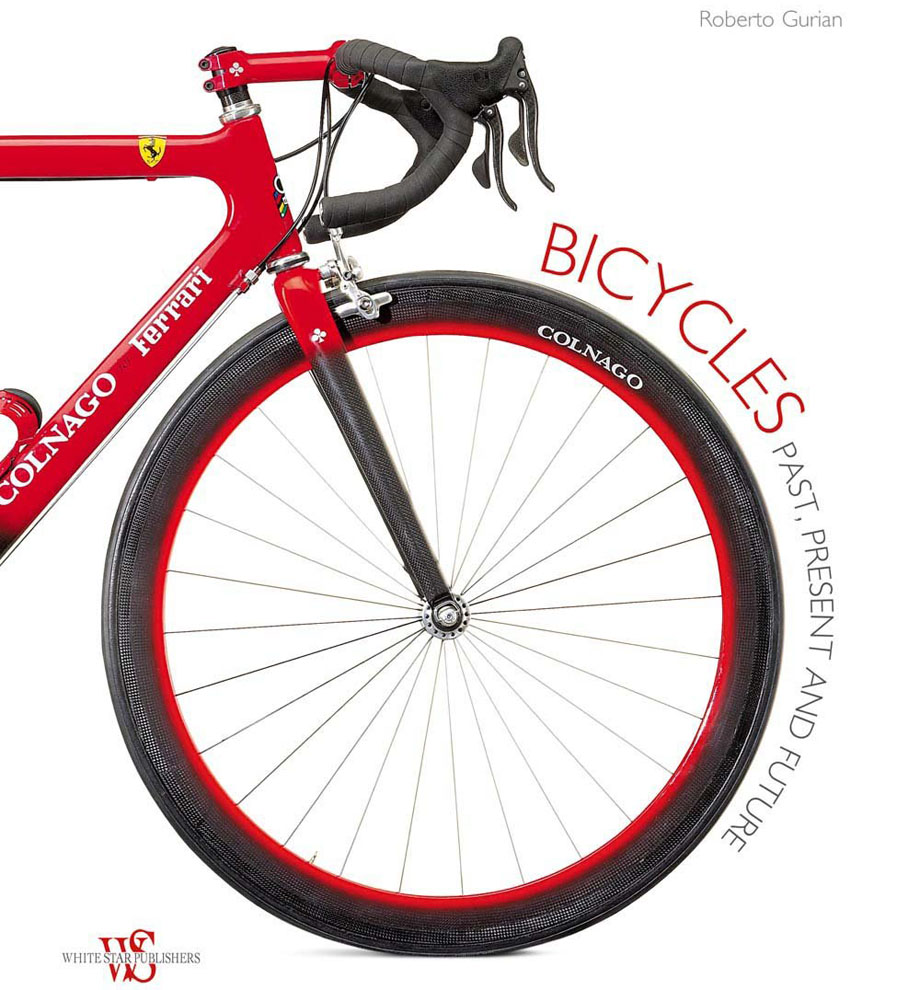 It would seem that something as simple and self-evident as a bicycle would have come to clever mechanical minds far earlier than it did. This year marks the 200th anniversary of the first recorded bicycle journey as Karl Friedrich Christian Ludwig Freiherr Drais von Sauerbronn propelled his two wheeler through the streets of Mannheim to a coach stop on the road to Schwetzingen and back again on June 12, 1817. 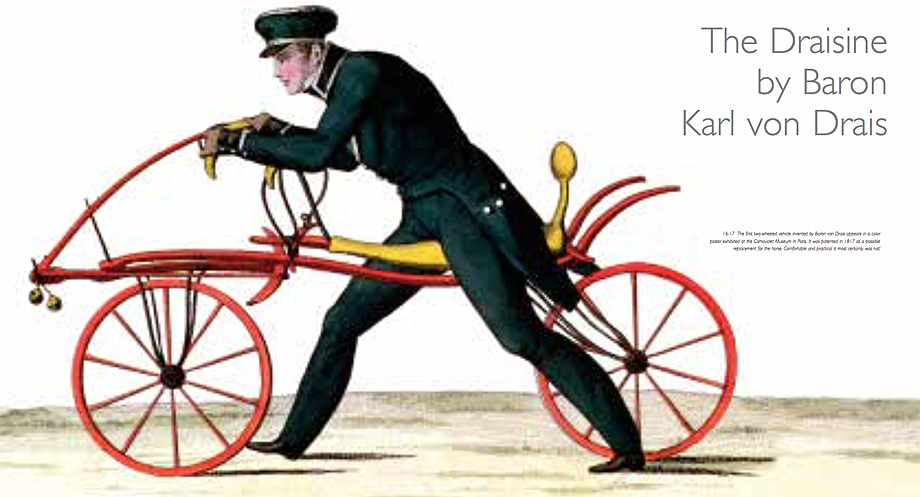 The road trip was 14 km and took less than an hour, an impressive enough speed for the time but it was not the road to riches for the Baron as his heavy wooden device was not well-suited to the terrible roads of the day. It would be left to others to refine the machine in fits and starts over the next seven decades. The evolution of the bicycle and the flowering of the mechanical imagination never fails to charm and this glorious variety is in full display in a beautiful coffee table book entitled: “Bicycles: Past, Present and Future” with text by Roberto Gurian. 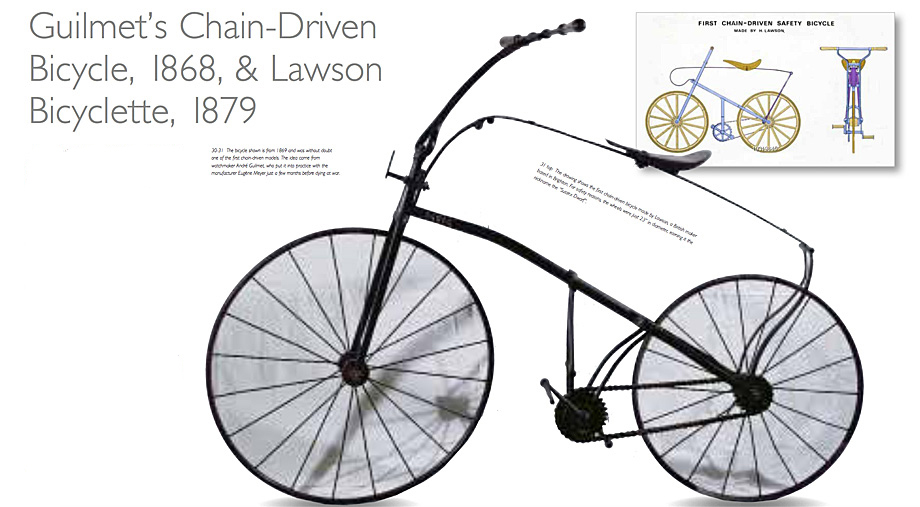 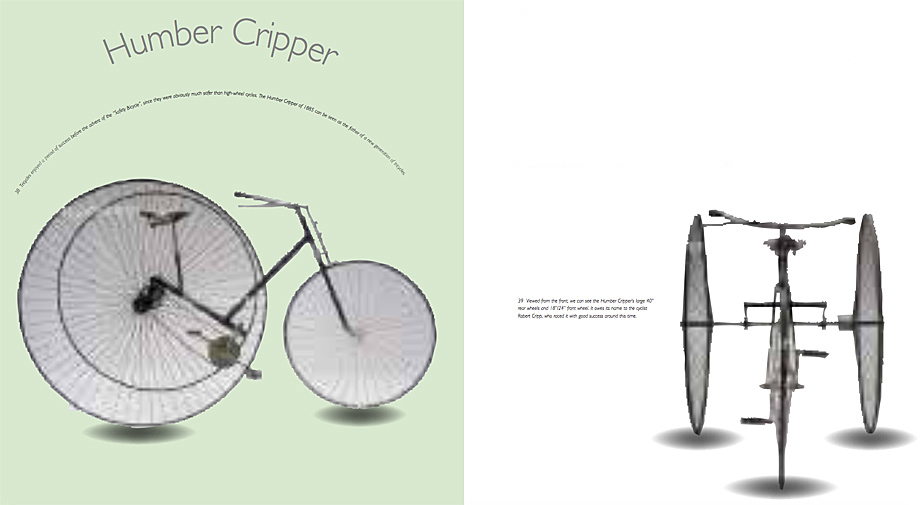 This exquisitely illustrated book employed a graphic designer, Maria Cucchi, in its production and she is credited along with Mr. Gurian as well as two “project editors.” We are treated to a short section of text describing the bicycle in question and, in truth, we are shown machines of the past, present and future as promised. For some of us the past offers real enchantment as we travel from Baron Drais’ draisine to the first pedal-driven bicycles to the high-wheeler and the breakthrough safety bicycle of 1885. But in addition to the well-known (Michaud’s Velocipede, the Starley Ariel, the Rover) we are treated to some picturesque oddities, such as the Humber Cripper tricycle and Guilmet’s Chain Driven Bicycle of 1868 before we leap into the slightly more recognizable era of racing bicycles from the early days of the Tour de France and similar events. 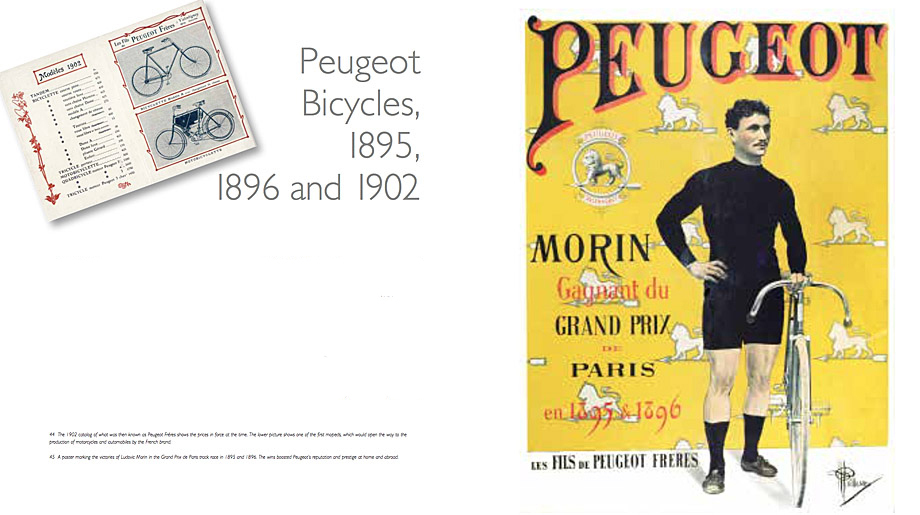 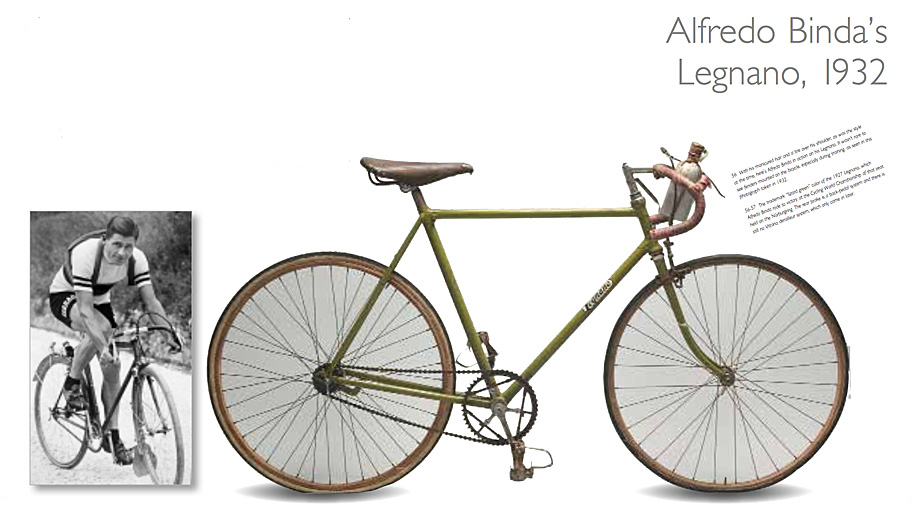 There is a lovely Bianchi track bike from 1899 used to win the Paris Grand Prix in 1899 and Petit-Breton’s 1908 Peugeot. Of course bicycles were not just used for racing but were seen as having more practical but ultimately short-lived uses, including service with fire departments and the military. Concluding the chapter, Alberto Binda’s 1932 Legnano is shown in the brand’s trademark green color. Binda was three times World Champion and a truly great rider who was actually paid by the organizers to stay away from the 1930 Giro d’Italia. 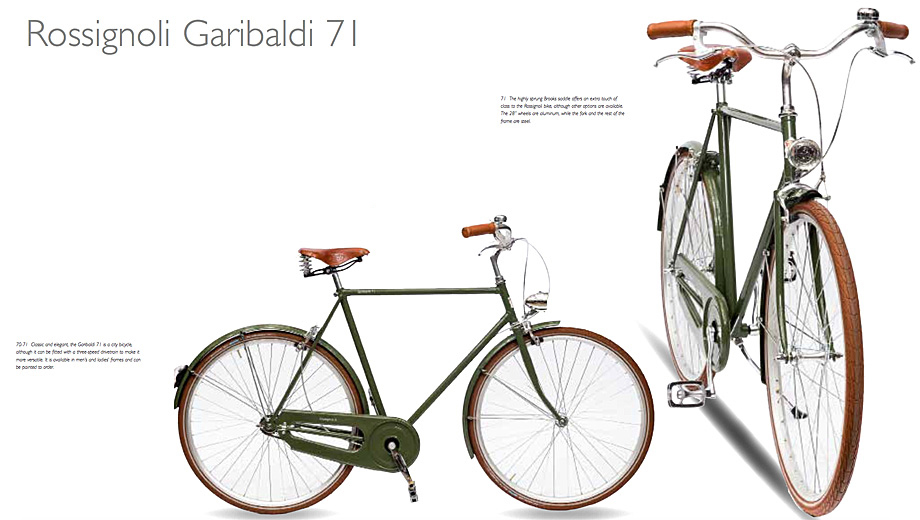 This section of bicycles of the past was very enjoyable but as a student of cycling history I was disappointed to see reference made to the “celerifere” of one Count Mede de Sivrac, supposedly demonstrated in Paris in 1792, as the first bicycle but this claim has never been verified and appears to have only surfaced years after the event as a nationalistic counterclaim to the German one. An even earlier claim that a scribbled drawing of a bicycle with a chain drive was from the hand of Leonardo da Vinci in one of his notebooks is considered by most (except Italian nationalists, of course) to be a later fraud. 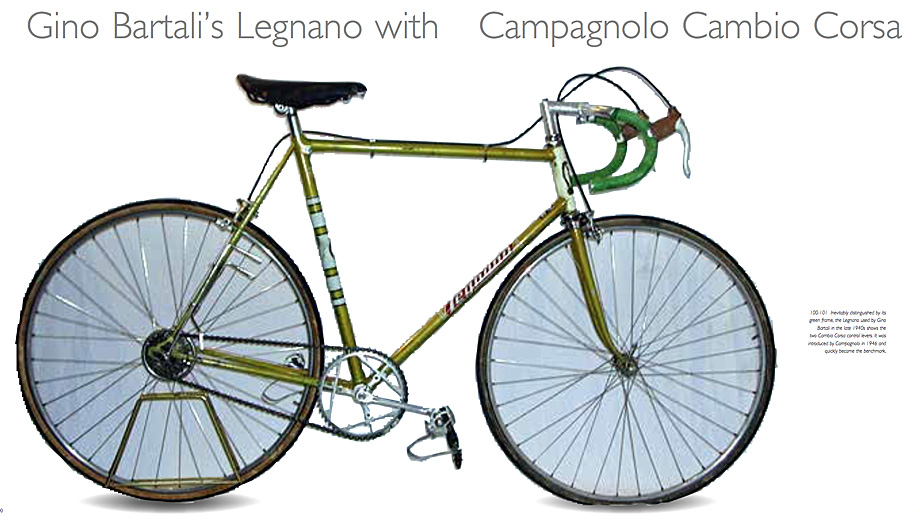 But we should not quibble over the details of history perhaps when confronted with such a buffet of bicycle delights. Our next chapter covers “Modern Bikes,” and offers some unusual choices, from the BSA paratrooper bicycle to some interesting folding bicycles to a number of current bicycles that are distinguished by their look backwards. The Rossignoli Garibaldi 71 looks similar to the bikes still in use in China (but more stylish, as befits an Italian marque), while the Peugeot Legend LC11 looks exactly like one of those huge Dutch Gazelles. China’s Flying Pigeon is indeed present and so it the Legnano Vintage Gent, chaincases and all. I am not so certain of how representative this selection is of modern bicycles but it is entertaining. 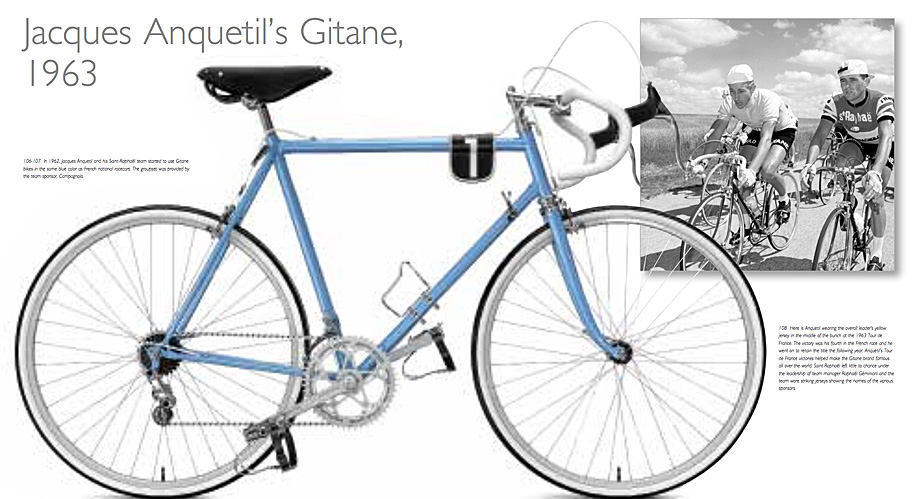 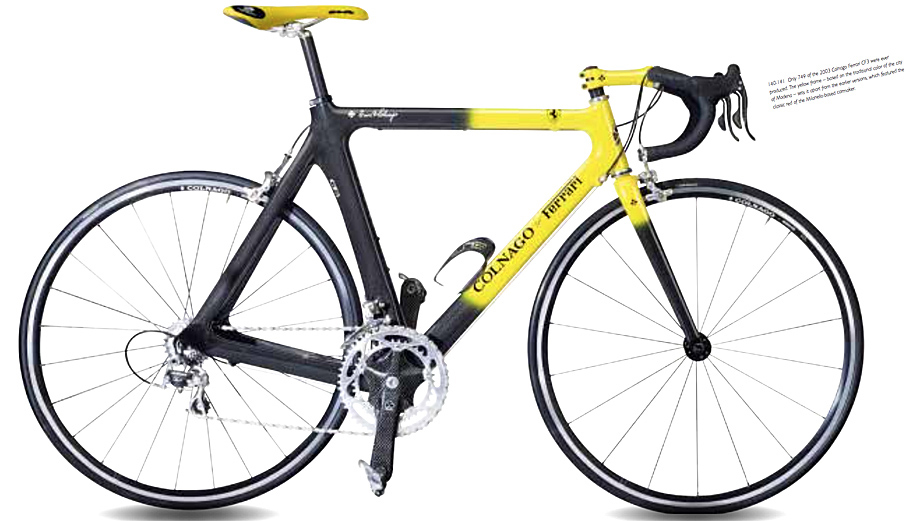 Of course PezCyclingNews readership wants to see racing bicycles and there is no disappointment here. Chapter 3 is “Modern Racing Bicycle” and starts with a bang as we can read about Gino Bartali’s beautiful Legnano with its awkward Campagnolo Cambio Corso gear change system. Then there is Coppi’s winning Bianchi from the 1953 World’s, Anquetil’s beautiful blue Gitane from 1963, Gimondi’s 1965 Magni and so forth through the iron (and carbon) steeds of champions all the way to Vincenzo Nibali’s 2014 Tour de France Specialized S-Works Tarmac. There is clearly an emphasis on the Italian aspect of racing but, well, why not? 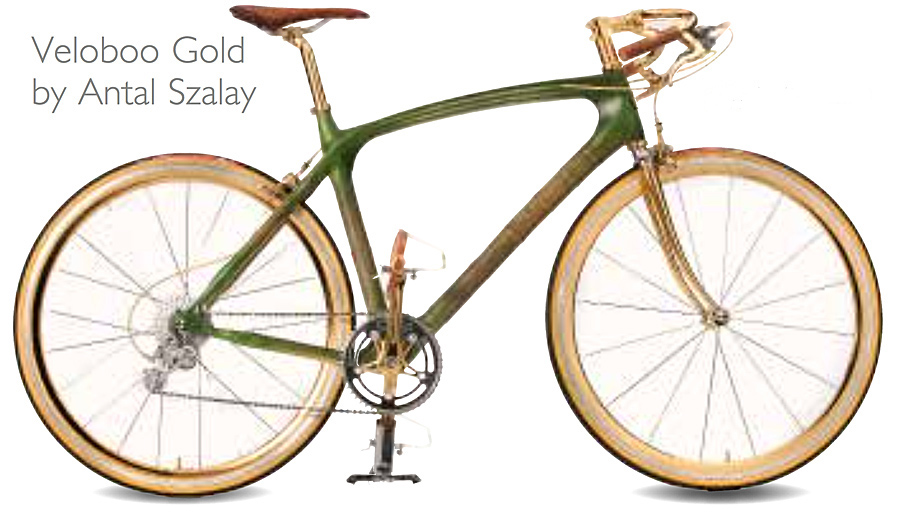 “And why not?” is a good characterization of the remainder of the book. There is a chapter on “Handmade Bikes,” another on “Concept Bikes,” many of which are weirdly fascinating, before we return to the more prosaic world of mountain bikes and a look into what is truly turning into the future of cycling, the pedal -assist bikes, both gasolene- and electric-powered. 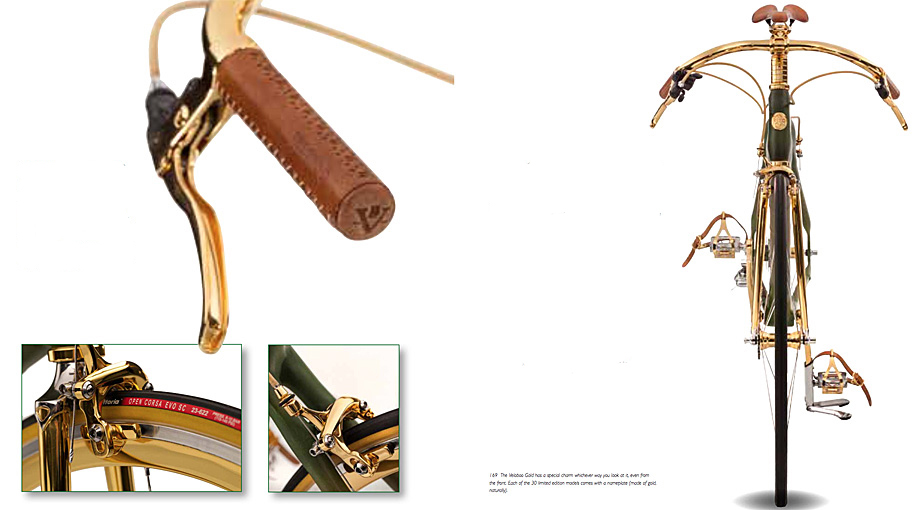 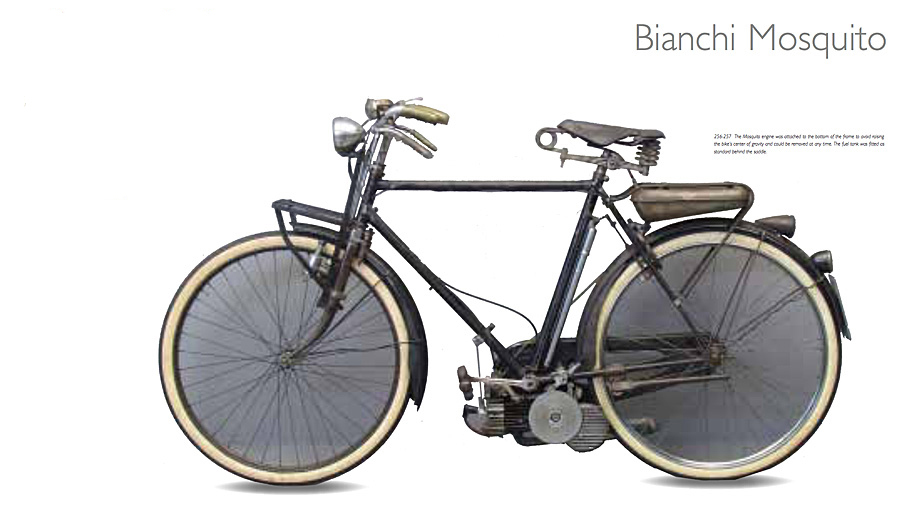 I was very surprised to discover this gorgeous hardbound book at a very reasonable price at a large volume chain bookstore. Although it is not a work of historical scholarship, there are discoveries to be made and it is a marvelous thing to leaf through. Considering that the illustrations originate from a vast number of sources, the graphic design is superbly unified (kudos to Ms. Cucchi); “Bicycles: Past, Present, and Future” would make an impressive gift to anyone interested in bicycles or fine photography. 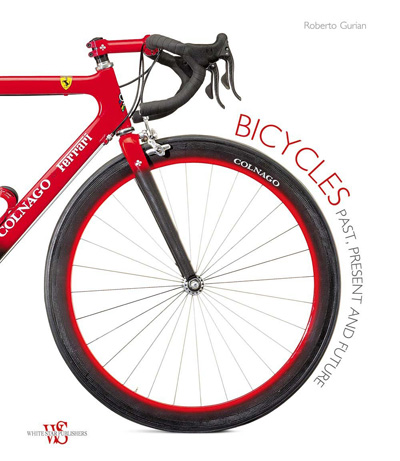 “Bicycles: Past, Present and Future” is available from AMAZON.COM.

When not wondering how Gino Bartali had any fingers left after shifting gears so close to his chain, Leslie Reissner may be found at www.tindonkey.com wishing he too had a flax-framed Schwinn with bamboo handlebar grips.