The capturing of a bicycle race has taken many forms. From the breathless, florid prose of the overwrought correspondents following the Tour de France writing for L’Auto, then to still photography with unwieldy cameras and on to sound with radio (and accordion accompaniment!), then film newsreels and television and now Internet sites, podcasts and fans waving cellphones. There have been attempts by painters to capture the special moments of a race: Toulouse Lautrec’s 1896 poster of racers using Simpson chains; Lyonel Feininger’s trapezoidal speedsters in 1912; Edward Hopper’s 1937 portrait of a Six Day Racer in his cabin. But they all seem too studied, unable to depict the energy that we know and love when we watch our cycling heroes in action. But when the Road World Championships come to Richmond, Virginia this fall there is at least one man ready to try. 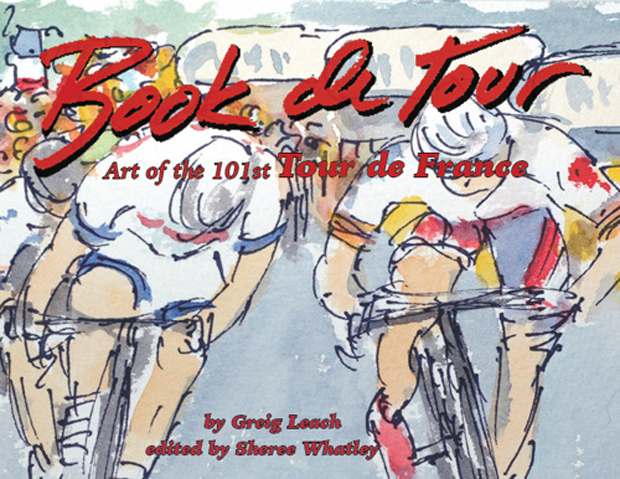 Greig Leach is an accomplished painter whose works have been exhibited throughout the United States. He has received formal training at the Corcoran Museum’s School of Art in Washington, DC, Montgomery College in Maryland and Virginia Commonwealth University in Richmond. In addition, he has been Visiting Artist at the American Academy in Rome and is a past Fellow of the Virginia Museum of Fine Arts, where he also served a term as Artist-in-Residence. And not only are his painterly credentials thus established but he also enjoyed bicycle racing as an amateur in the 1970s, the Precarbonian Era of American competitive cycling. And he now enjoys the title of Official Artist of the World Cycling Championships in Richmond. 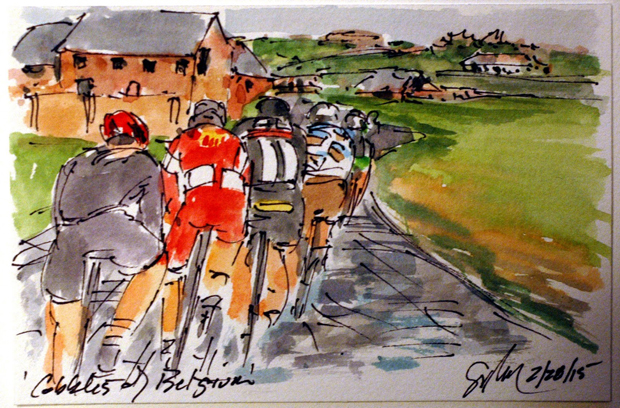 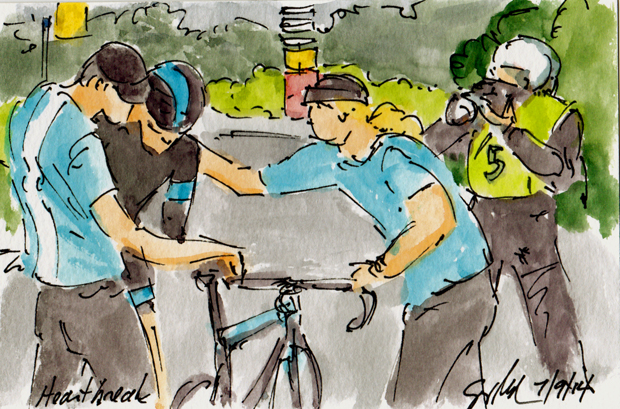 Mr. Leach’s affection for cycling and his understanding of the sport have allowed him to capture today’s races in a colourful and exciting style. Watching the races live on television, he endeavours to paint, using watercolours and oils, in the moment. This video capture technique and a sure sense of colour and composition result in rapid-fire but fluid miniature works of original art, apparently in a postcard sized format. 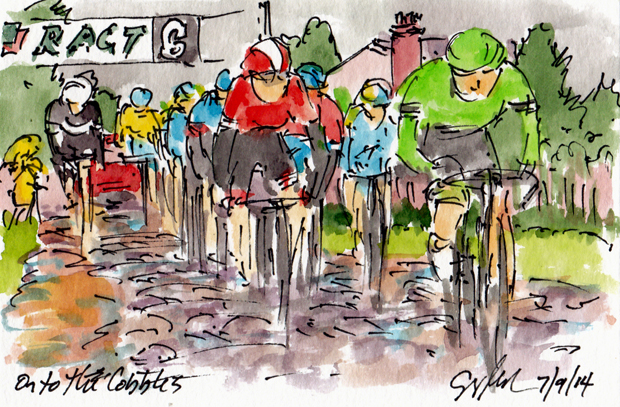 On to the Cobbles

We only recently became aware of Mr. Leach’s work during the early Spring races in Belgium this year. He produced and displayed online wonderful pictures of the action at Omloop Het Nieuwsblad and Kuurne-Brussels-Kuurne. His work is characterized by bright splashes of colour, a feeling of movement and only enough detail to sense who the riders might be. He has already moved on to Paris-Nice activity and produces around five images per stage. All of this excellent paintings may be seen at his blog, The Art of Cycling (https://theartofcycling.blogspot.ca/) and under each painting there is clear explanation of what is happening: riders going over the cobbles; poor Tom Boonen crashing out. 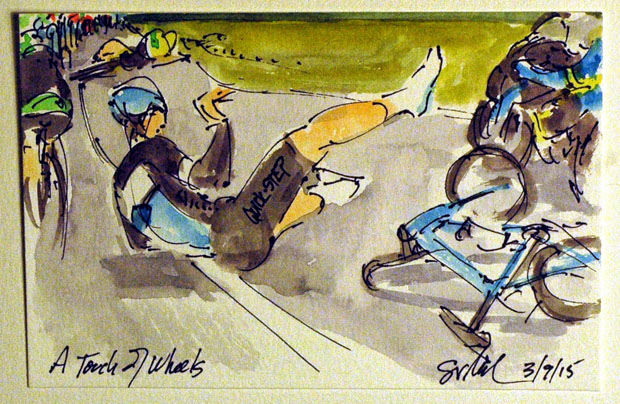 A touch of wheels and Tom Boonen is out

All this admirable activity should be contained in a nice book, you say, since this is the Pez Bookshelf. And thanks to the miracle of crowdfunding and his own considerable initiative your desires are fulfilled. Mr. Leach felt guilt about spending so much time watching the Tour de France rather than indulge his workaholic tendencies. His wife suggested painting the racing and sharing his work on social media sites was a way to deal with this. He began his blog at the start of the 2013 Giro d’Italia and produced daily paintings of each stage. He launched a crowdfunding campaign to launch a new project in 2014: coverage of each stage of the Tour de France. The result was his first publication, Book de Tour, which was released early this year. 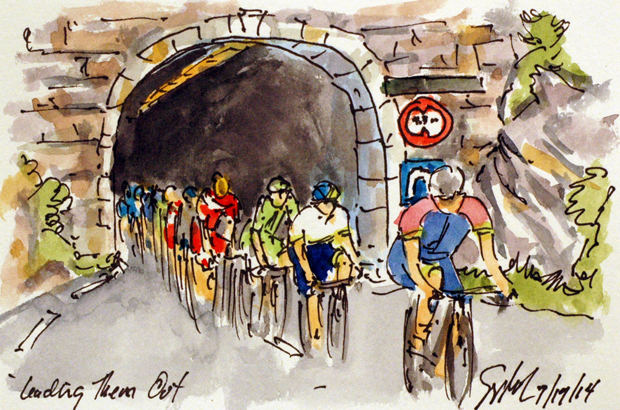 It is hard to believe that Mr. Leach is not actually present for the races he paints. All of the work is created from either television or internet video feeds in his living room. He has the advantage of thus seeing the entire race and is able to judge those moments best suited to his portrayals. 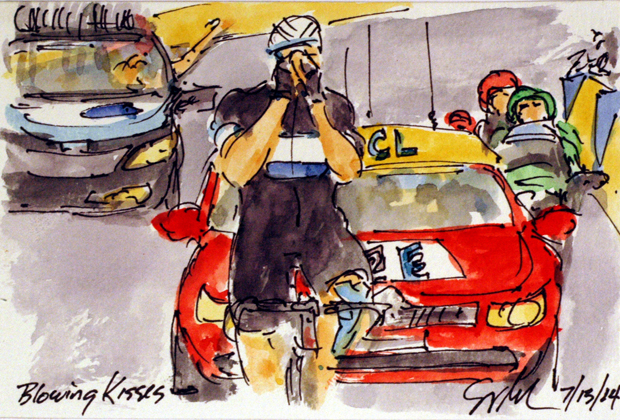 Book de Tour, in its 220 pages, covers each stage of the 2014 race in glorious colour. Each stage has a chapter which begins with his drawn profile of the stage, followed by around eight pages of stage incidents and concluding with a page showing the jerseys of the stage winners and the overall leaders. 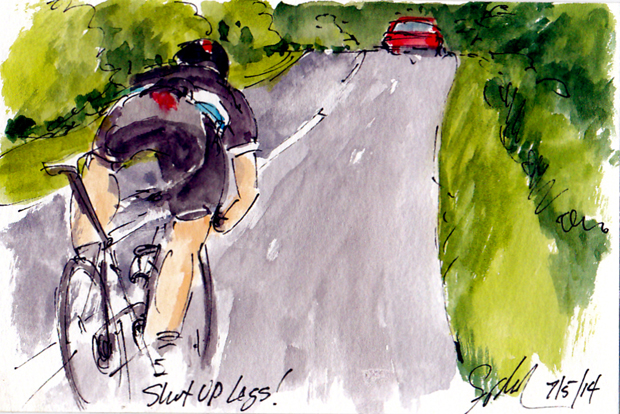 It is enjoyable to relive the wonderful moments from that Tour de France. In Stage 1 we had Jens Voigt chasing down the King of the Mountains jersey on the road to Harrogate and Marcel Kittel, like some kind of monster, crossing the finish line for the win, only to slide off the back with a consolation pat from Romain Feillu during Stage 2. For Stage 5 Mr. Leach again shows his facility with rendering cobblestones for the segment when Vincenzo Nibali showed he was a real contender. Tony Martin’s unexpected triumph on the hilly Stage 9 was captured in the first and last painting in the series. Less happy events, such as the abandonments by Froome and Contador, are included. And who did not feel sorry for Jack Bauer and Martin Elmiger, caught right at the finish line after leading most of Stage 15 by themselves. 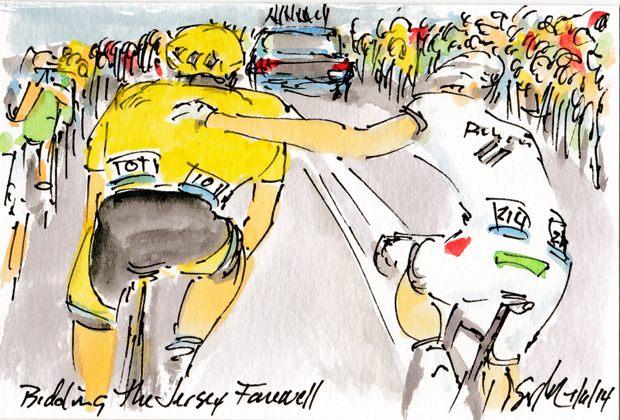 Bidding the jersey farewell as the peloton ride into the distance

Present as I was in Paris for the final stage, I particularly enjoyed reliving the experience through these paintings, including the perfectly timed moment when the peloton crossed the Seine into the city as French fighter jets provided a red-white-and-blue finish. There’s Jens Voigt again! And Tony Martin having a mechanical. And Kittel once more first at the finish line. 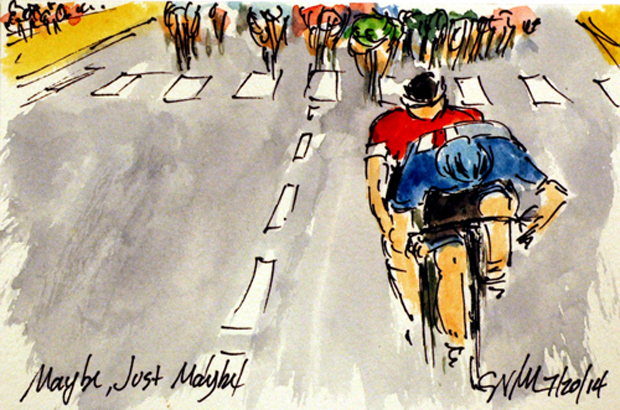 The lively images coupled with the intelligent and concise summaries make this an unusual and very attractive that-was-the-Tour summary compared to the photos we have seen so often in yearbooks past. Book de Tour is a charming and entertaining volume that would appeal to art lovers, cycling neophytes and hardcore fans equally. We suggest you follow Mr. Leach’s blog for colour commentary in the truest sense of the word. His postcard paintings, each original artworks, can be purchased as well. Bring on the World Championships! 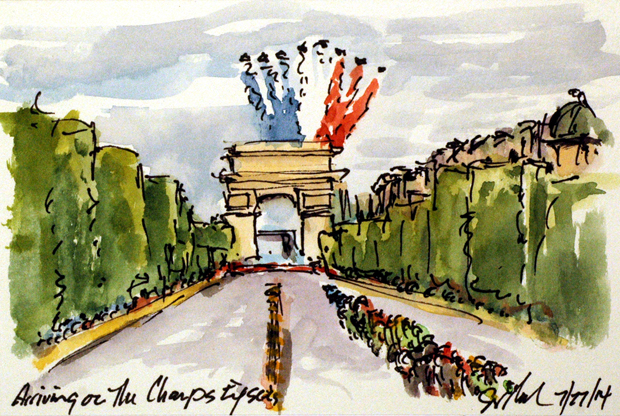 The Finalé – Arriving on the Champs Élysées

For more information about Greig Leach’s art, go to www.greigleach.com. 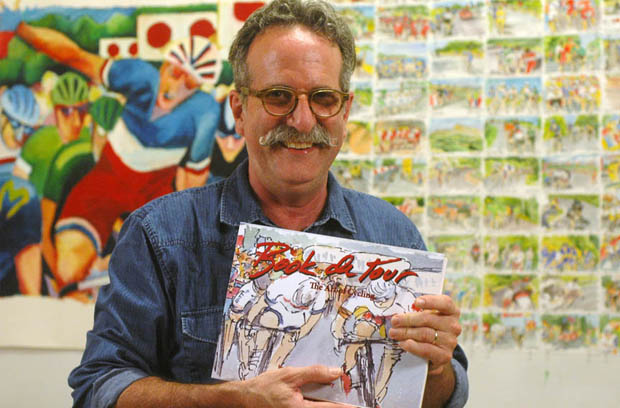 When not planning which brewpubs he will visit in Richmond in October, Leslie Reissner may be found living his life as an art form at www.tindonkey.com.
Like PEZ? Why not subscribe to our weekly newsletter to receive updates and reminders on what's cool in road cycling?