Bookshelf: The Covid-19 delayed 2020 Tour de France has eventually started and we all hope it will go all the way to Paris in three weeks time, but at least we have racing to watch. To go along with what we will see on the TV, Rapha have put together a collection of Tour maps covering each year from 1903 until 2018. 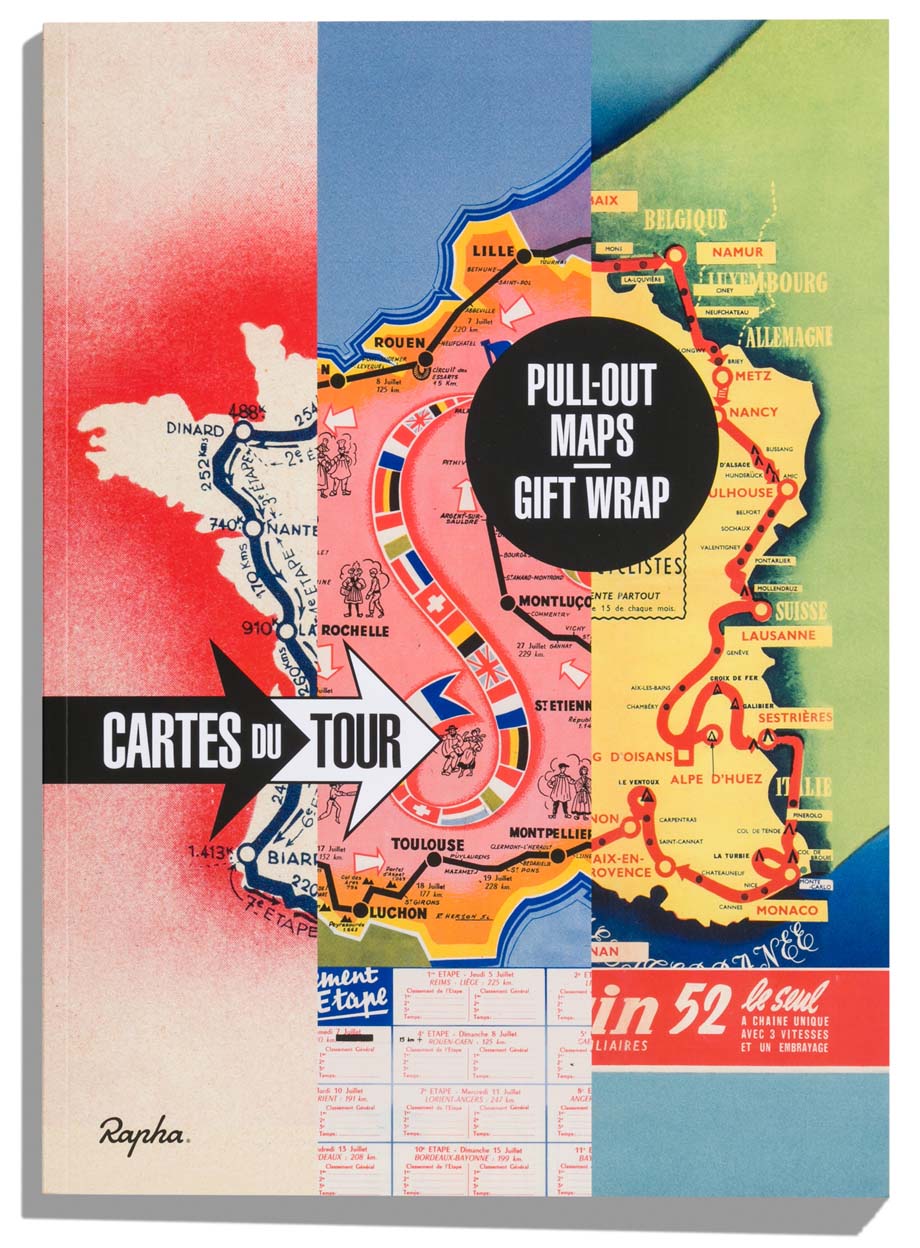 Singer/songwriter Nick Cave once remarked: “My music has to do with beauty, and it’s intended to, if not lift the spirits, then be a kind of a balm to the spirits.” “Carte du Tour” is just such a balm to the spirits of bereft Tour de France enthusiasts. It is a beautifully produced book that takes a unique approach to telling the story of the Tour by using contemporary maps covering each year from 1903 until 2018.

The accompanying bilingual text (French and English, bien sûr!) is by Paul Fournel, author, poet, playwright and former Cultural Attaché with the French Embassies in Cairo and London. In addition to his works related to the Oulipo school of literature, he is the author of “Need For the Bike,” a slim volume of short essays that should be considered obligatory to own by every cycling enthusiast, along with Tim Krabbé’s “The Rider.” 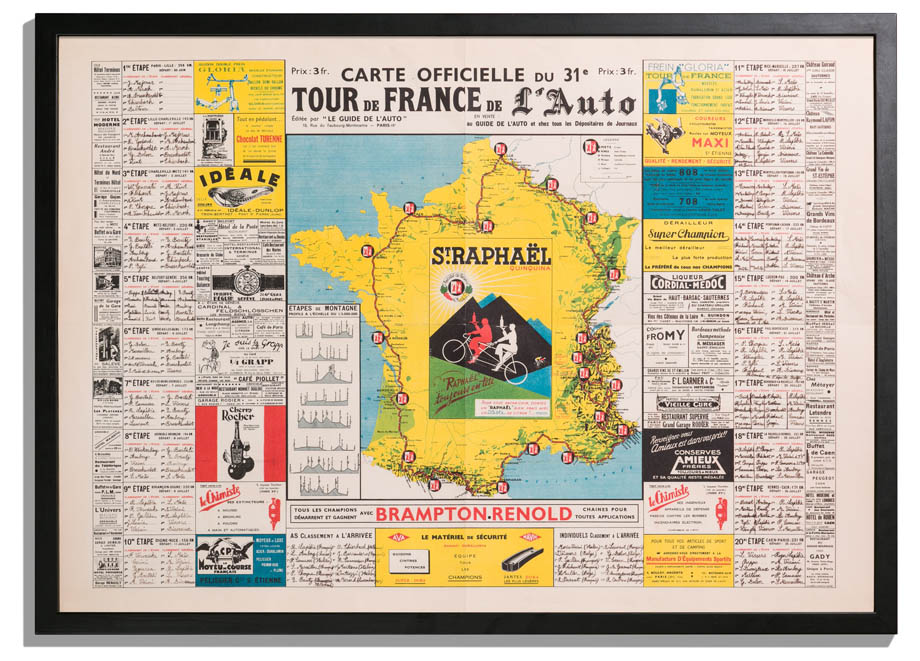 This book rewards browsers. The maps are a graphics delight, ranging from rather simple efforts in the early days to colourful views of more recent years. Many of the maps were clearly newspaper or magazine supplements that fans could pore over and then, in the allotted spaces, note down the top three riders for each stage. As well, the Tour has never been short of commercial focus so many of the maps offer advertisements. Some are for familiar products—Perrier, Toshiba, Cinzano, while others evoke a different era—Zimba Kola from 1949, Limpidol (“Better than Glue!”). In 1949 there was an ad for Les Cycles Dutrion, bicycles “built by the former champion cyclist Dutrion which need no advertising.” And nobody can overlook La Banane: “before the effort, after the effort, the indispensible cycling food.”

There are in some cases different maps for the same year but showing a different approach to presenting the route. Some maps have photos of the stars, or profiles of the big climbs. Some of the maps are presented in unusual ways: on drinks trays, or philatelists’ special edition covers; or medals; or playing cards.

The text, which first presents a summary of the decade, followed by individual years, does not relate to the maps themselves but rather is Fournel’s take on interesting incidents of the Tour. Fournel is an elegant stylist, although the odd translation misfires, such as the famous quote from the 1924 newspaper article where Henri Pélissier (“whose mouth was as big as his thighs”) complained to journalist Albert Londres about conditions in the Tour. Usually translated as the punchy “we ride on dynamite” it becomes “we function on explosives.” But this is a quibble given the quality of the writing and the effortless coverage of so much history. 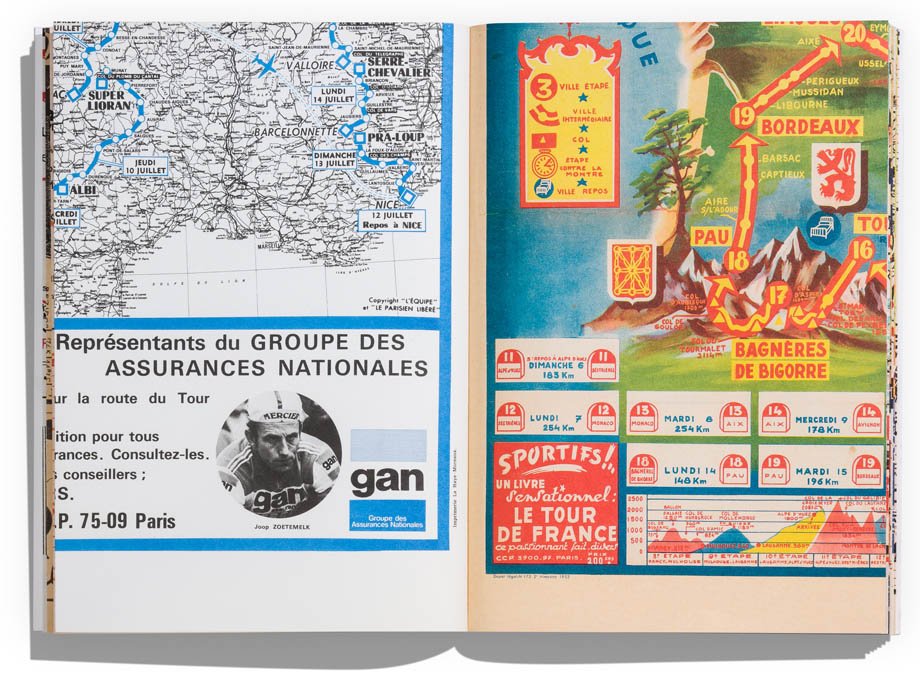 Fournel tells us about Henri Desgrange, about the Tour Féminin, about the introduction of variable gearing and the Yellow Jersey and L’Étape du Tour. The Popular Front government of France is a key to enthusiasm for the Tour as it introduced paid leave in 1936, helping make the Tour de France “the obligatory appointment for the holidays.” Fournel conjures up exactly the image one imagines when considering what makes the Tour so special:

“The show is free, the weather’s good and the race becomes an opportunity for an outing with family or friends. Each July, the Tour de France transforms itself into a gigantic three week, 3,000 kilometre picnic. We snack from the embankment at the side of the road, we chat, we unfold tables, we put the wine in a cooling bucket and we await the passage of the giants of the road.”

The maps reveal more than a century of journeying around France, truly La Grand Boucle (“The Big Loop”) dreamt of by the race’s founders. There are certain big cities that have appeared many times, along with lesser towns that serve as gateways to the high mountains and an additional group of places that pay good money to be noticed as a tourist attraction, such as Alpe d’Huez or Futuroscope or Pra-Loup. The route, alternating annually as it goes clockwise or counterclockwise, takes in pretty much the entire country even if some serious detouring has to be planned to get into the centre of France if you still want to do the obligatory Alps and Pyrenees. The Tour de France receives significant subsidies from the French government and aims to cover regions of the greatest touristic attraction. The Tour has made little jaunts into neighbouring countries, which have generally attracted great attention. Not all of it was favourable: from 1907 to 1910 the Tour included Metz in Alsace-Lorraine, territory annexed by Germany after the War of 1870, as Henri Desgrange’s intention was to irritate the Kaiser. This succeeded sufficiently that the Tour de France was not present in Germany until 1964. 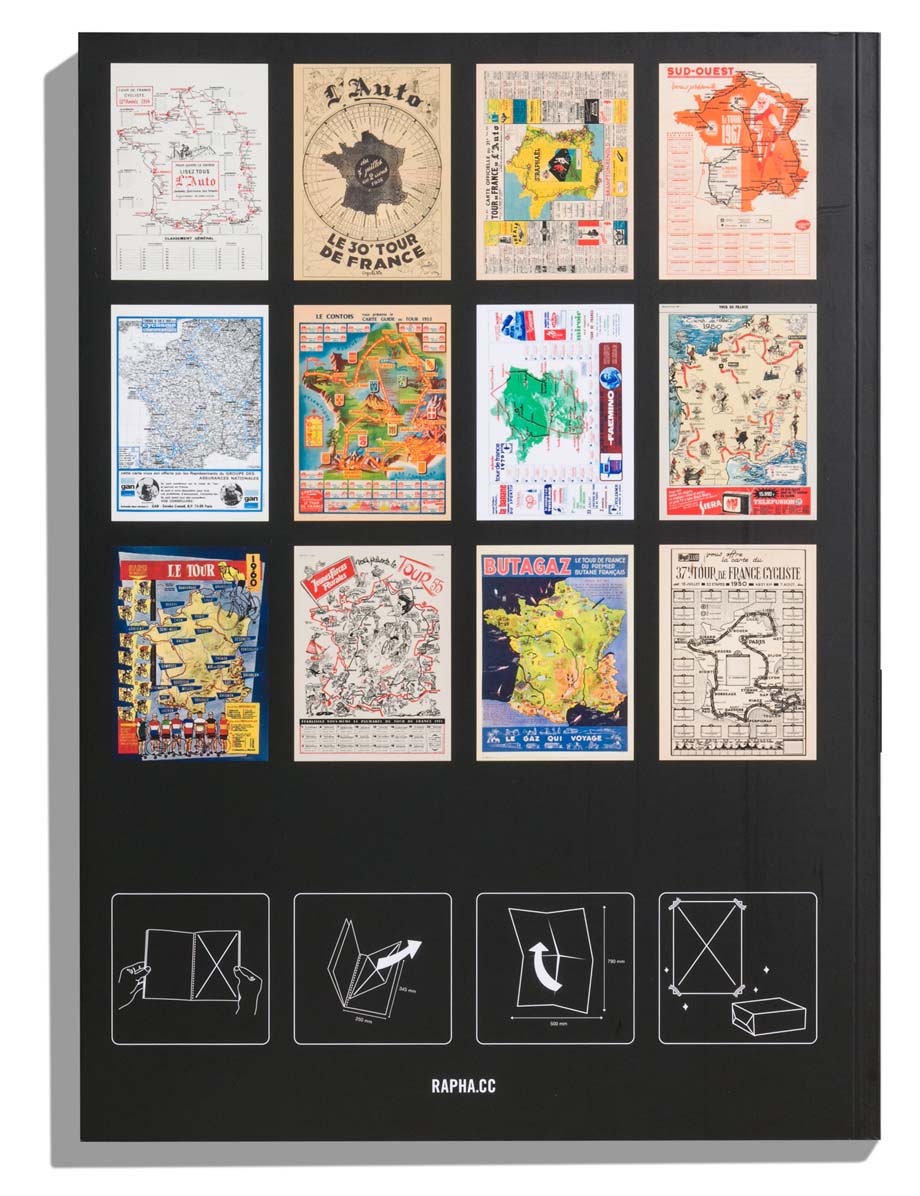 Much of the pleasure in reading this book is the retelling of oft-told tales. Fournel’s take on the 1967 Tour evokes Tom Simpson, whose death on the slopes of Mont Ventoux overshadows everything else about the race that year. But Fournel writes:

“As for Simpson, we forgot the excellent world champion that he had been; we forgot his wins in the Tour of Flanders, in Milan-San Remo, in Bordeaux-Paris. We forgot his entirely British elegance, his real kindness, his sense of humour and the backdrop of loneliness in his look which exile gives someone. He had left England for Brittany and then for Belgium. He simply wanted to earn his living as a professional cyclist. Jean Bobet described him as a mercenary. Maybe he was one, but he was also a gentleman. It’s the image of his whiter than white face, of his white jersey in the white rocks of Ventoux, which remains engraved in everyone’s memory.”

There are many books covering the history of the Tour de France but “Cartes du Tour” has taken a fresh and attractive approach. Whether planning to emulate heroes of the past by planning to ride an historic stage, comparing graphic approaches since 1903, enjoying fine reflective writing, or simply savouring beautiful book design, this edition from Rapha must surely be considered a balm to the spirits as we await the return of this most special of sporting events. 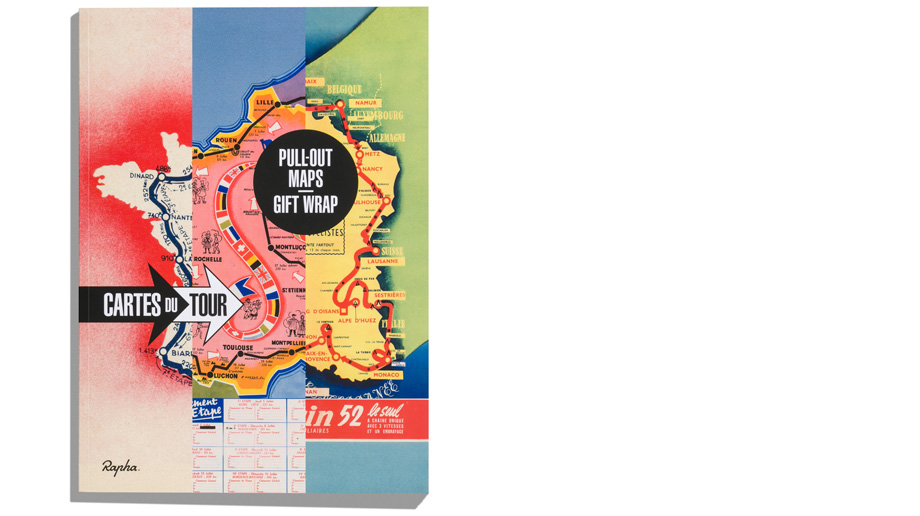