As someone who has a bookshelf groaning with volumes dedicated to a certain now-non-Tour de France-winning Texan, it has always seemed odd to me that books dedicated to the greatest racing cyclist ever are fairly scarce in English, or pretty much any other language. There is an old joke that the only famous Belgians anyone can name are Hercule Poirot and Tintin and both are fictitious but not only has Belgium produced celebrated cyclists (and, in fact, many notable people in other fields) but it has given us the best one of all: Edouard Louis Joseph Merckx. “Merckx 525” is a particularly good book published by Velopress nearly a decade ago that gives us his accomplishments in visual form and is well worth seeking out. 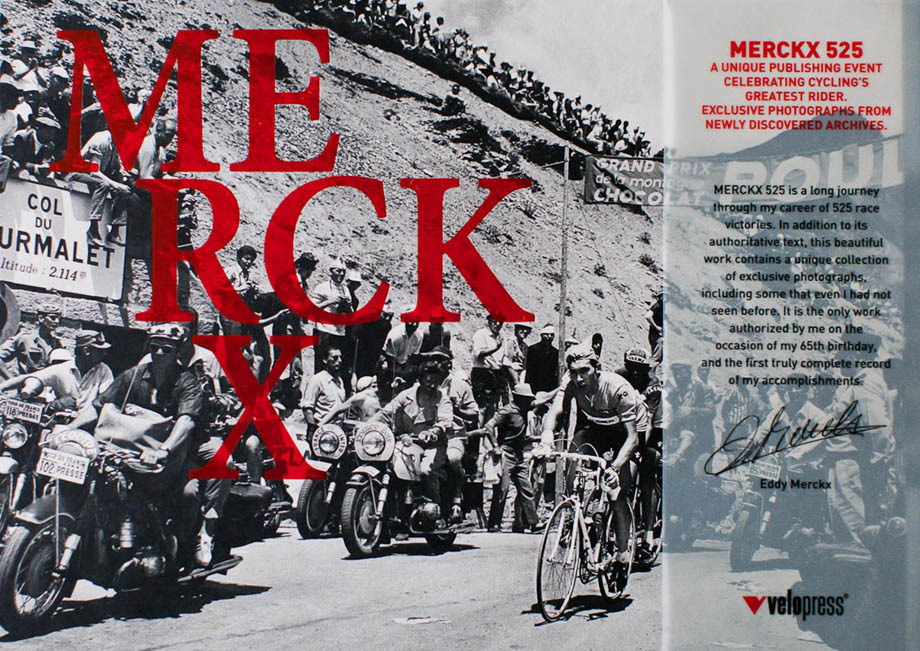 Originally published in Flemish in 2010, the year Eddy Merckx turned 65, “Merckx 525” celebrates the Cannibal’s career highlights from the beginning in 1961 to the fade-out in 1978, from a small obscure race in rural Belgium to, closing the circle, another one at the end. In those seventeen years, the dark-haired Belgian amassed a record of success that will never be matched in our age of specialists. Divided into 25 chapters, the large-format book chronicles his wins year-by-year with a table of victories, a short account of a highlight from that season and full-page photos. The majority of these are in timeless black-and-white, while the colour ones have that period feel appropriate to a half-century ago but look somewhat unnatural to us now. Many of the photos have not been published before, although a few old favourites come up as well. 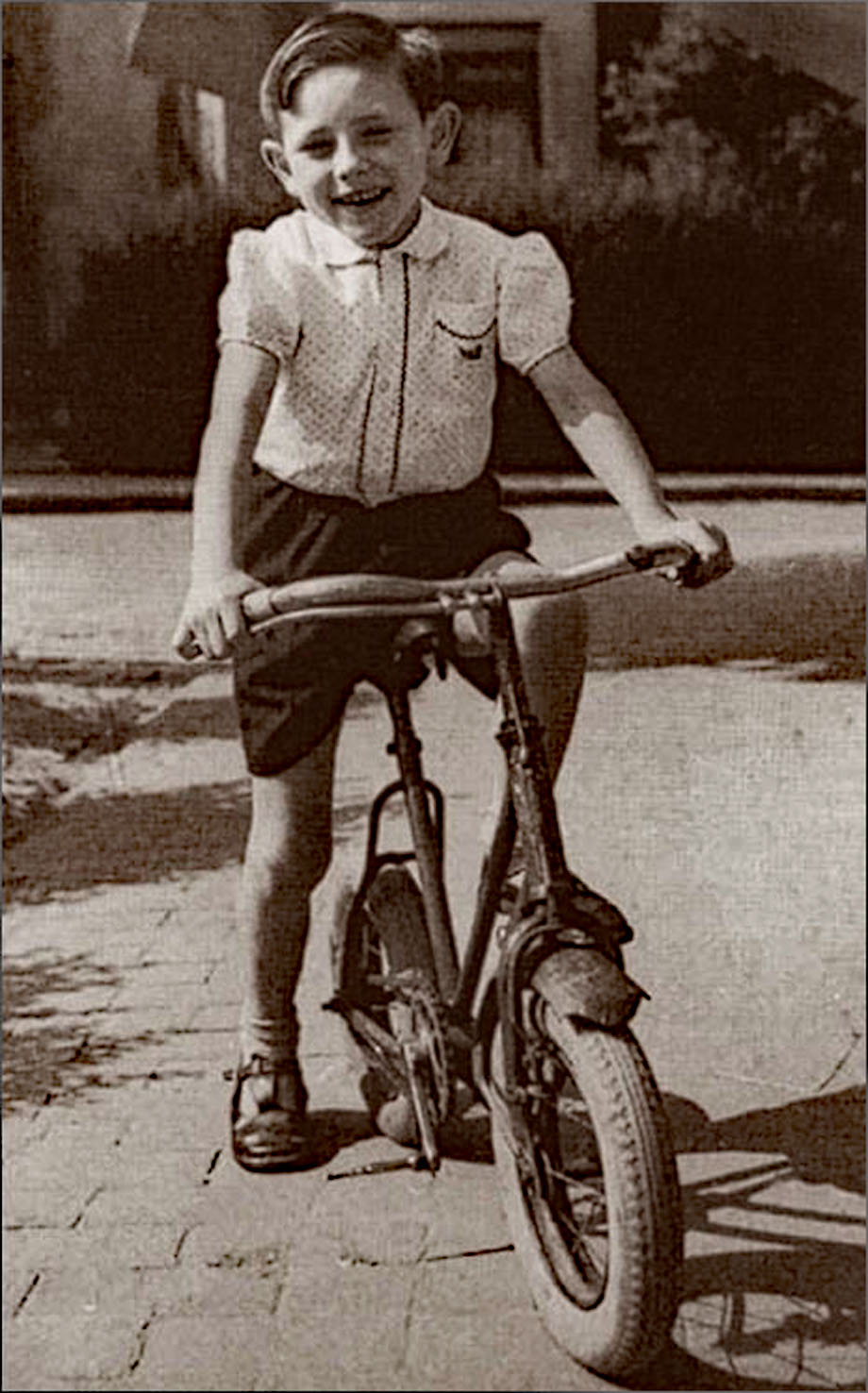 The story begins with Eddy, born in 1945, idolizing Belgium’s cycling stars of the 1950s. He came from a family that was not particularly sporting but offered him support and encouragement. After taking up racing as a youth he entered his first official race in 1961 and the palmares begin with his victory in his fourteenth outing, beating 34 other racers over a 62.2 km course on October 1. The hometown win in Petit-Enghien provides us with a photo of Eddy Merckx with his trophy and flowers and that grin that would be seen so often in the years ahead. 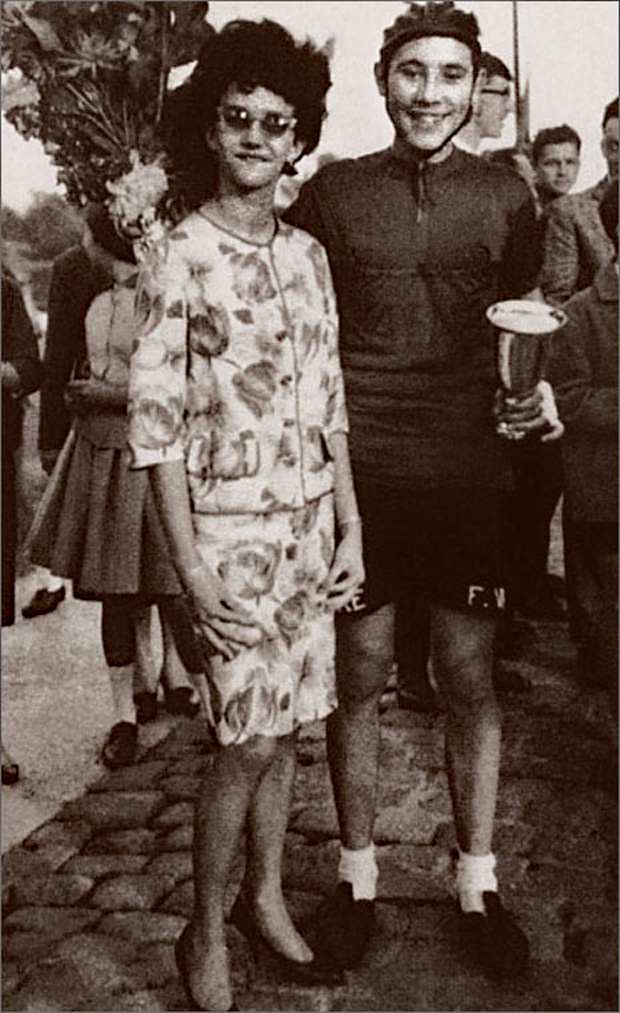 In 1962 the young racer began to hit his stride, winning four of the first five races he entered, advised and assisted by Felicien Vervaecke, who had been King of the Mountains at the Tour de France twice in the 1930s. He won 23 races that year, including the Novice Champion of Belgium, and having now left school for his passion, continued winning in 1963, with 28 victories.

1964 marked further progress, with another 24 wins. At the World Championships in Sallanches, France, the professionals from Belgium were to disappoint but the day before they raced young Eddy scores big, finishing 23 seconds ahead of the pack to win the Amateur World Championship, his first Rainbow Jersey. As the text by Frederik Backelandt, ably translated by Ted Costantino, notes:

“He has earned his world title in a way he later makes his own, by wearing down the opposition, by breaking away at the drop of a hat and so achieving a strong selection, and finally by going at it hammer and tongs again.” 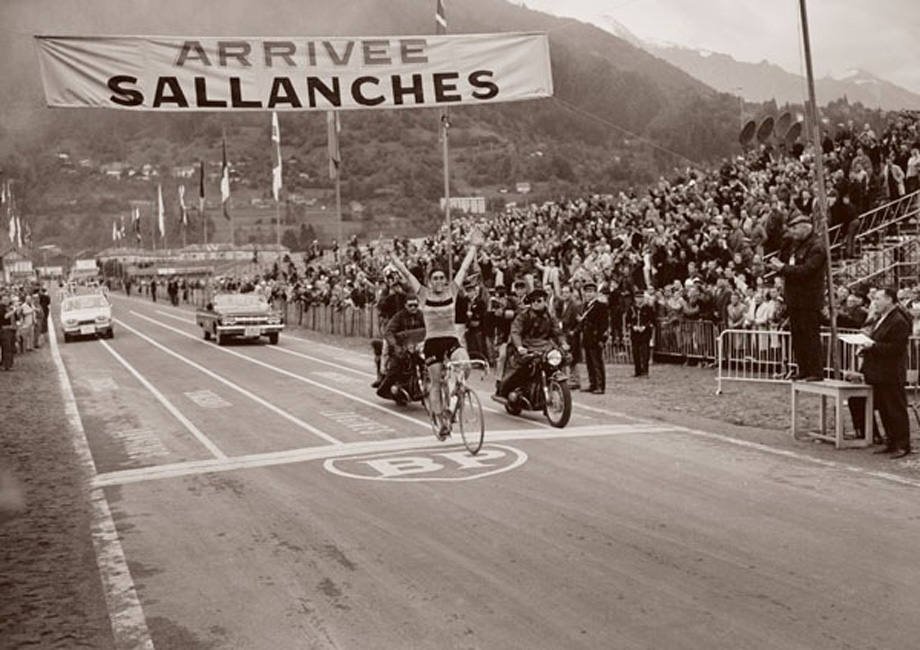 The rising star’s attempt to become Olympic Road Champion at the Tokyo games is not successful, and his twelfth place finish did not reflect his animation of the race. Time to move on and up and in 1965 he leaves behind the amateur world, signing as a pro with Solo-Superia, a team whose captain is the “Emperor” of Belgian cycling, Rik Van Looy. His first win as a pro comes in May that year and he goes on to rack up 9 more wins, as well as the three he still raced as an amateur in Spring. But Van Looy is not willing to offer the young rider the freedom he needs and at the end of the season he switches to the famous Peugeot factory team.

Although not much of a factor in cycling today, Peugeot once fielded an extraordinary racing team to market its bicycles. It was a different world then: Eddy had to pay for his own wheels and tires on the team! But it was clearly an improved environment for him as, contrary to all expectations, he began the 1966 season with the first of his Monuments: Milan-San Remo. Using his strong tactical skills, he positions himself perfectly for the final sprint in what was to be the first of his seven wins at La Primavera. Even his father remarked: “Who would have believed that of our Eddy?”

1967: another rapid climb. Another win at Milan-San Remo and then he added Ghent-Wevelgem and la Fleche Wallone to his victories, with 26 for the season. One of my favourite photos shows Merckx, escorted by policemen, walking in Wallonie, incredibly self-confident and pleased. 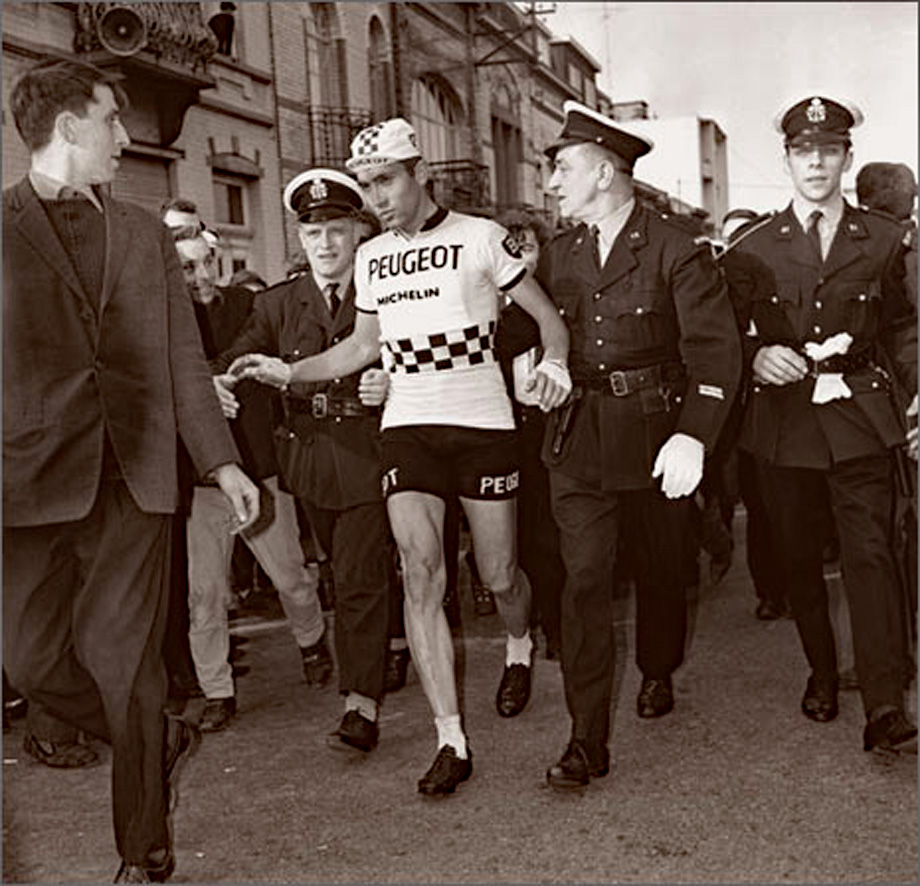 He had become a rock star, the Belgian Elvis (the thin one, not the later one!) The book includes a number of awkwardly-posed photos showing him as “a regular guy.” But he was not your average racing cyclist: on September 3rd he narrowly wins the World Championship in Heerlen, Netherlands and has entered the realm of the top racers. Peugeot could not afford him anymore and he moved to the Faema team, which was willing to build itself around him, and into his Golden Age. 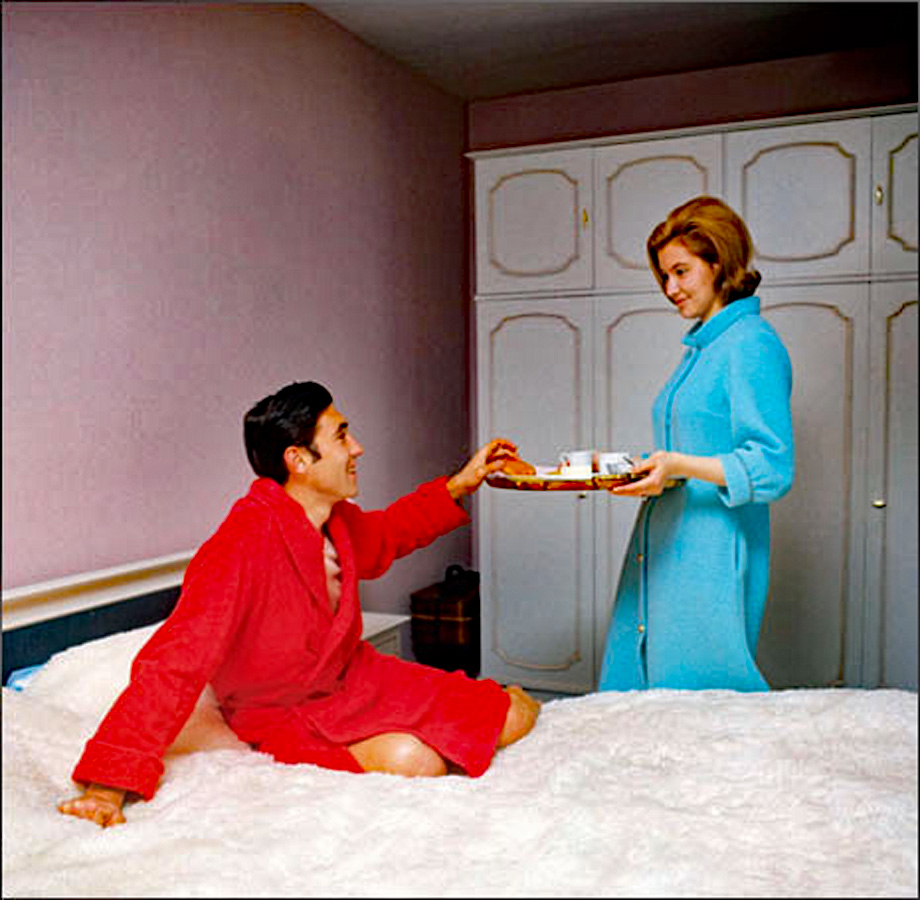 The victories roll on and on: 32 wins in 1968, including Paris-Roubaix, the Tour of Romandie and the Giro d’Italia, all worthy of a World Champion. In 1969 there were 43 wins and glorious finishes at Paris-Nice, Milan-San Remo, the Tour of Flanders and Liege-Bastogne-Liege, and a less glorious disqualification from the Giro for doping (the first of three failed tests in his career). The UCI accepted his appeal and he was able to participate in the Tour de France. Clearly energized by what he felt to be grossly unfair treatment in Italy, he destroyed his opposition at the Tour de France, winning by the sensational margin of nearly 18 minutes. As Rik Van Looy had been supplanted in the Classics, now Merckx replaced Jacques Anquetil as the great Tour de France champion. It is the first win in three decades at the Tour for a Belgian and his competitors are in despair as he has taken not only the Yellow Jersey but also the Green Jersey for points as well as the King of the Mountain classification. If there would have been a Best Young Rider jersey then, he would have taken that as well. He is a supernova. 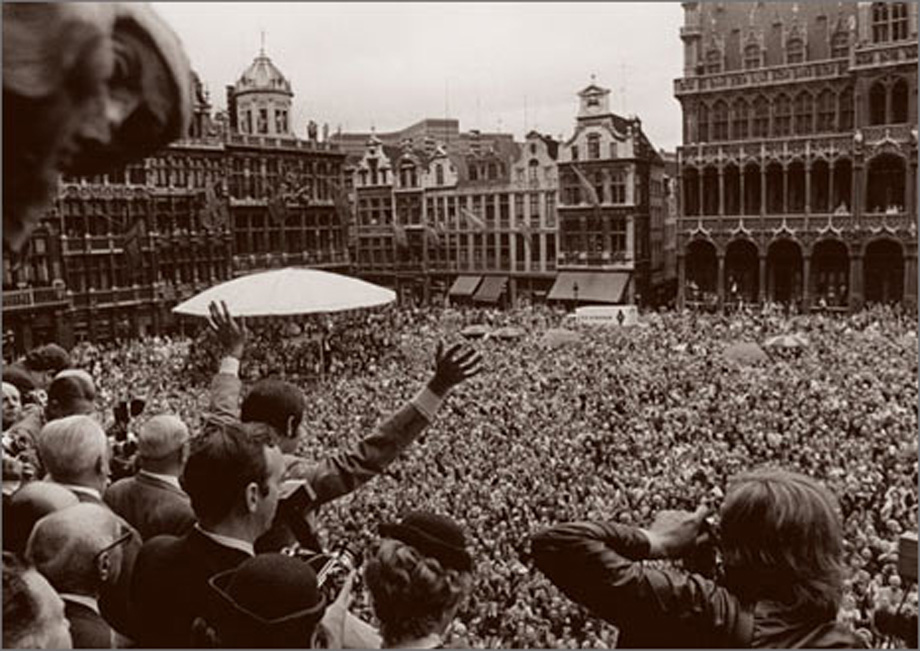 But the season ends badly as he is involved in a crash at the track at Blois. His derny driver dies in the incident and Merckx is rendered unconscious with a concussion and head wound. He suffered as well with a dislocated hip and bruised vertebra and was to subsequently maintain that after the fall in Blois he was never the same rider. At times the pain made it hard for him to ride and he would always be seeking the right position on the bike. This was not reflected in his continuing string of wins, but is a terrifying what-might-have-been if he himself did not feel he was not as good as previously!

As one leafs through this lovely book the string of victories becomes overwhelming as the Cannibal rides away from the best cyclists of the era. Compared to today’s pros, everyone raced a lot then and part of the reason Merckx won so often was that he raced so often. This must have also shortened his career in the end, and certainly being punched by a rabid French fan during the Tour de France in 1975 hastened the decline. But it is wonderful to see Merckx in his heyday, with the eternal grin and the pure joy in his face as he crossed the finish line first. He was trapped in many of the traditions of pro cycling of the time but in many ways was the modern rider as we understand him today: a driven perfectionist, totally focused, serious about training and equipment, the true captain of his team on the road. 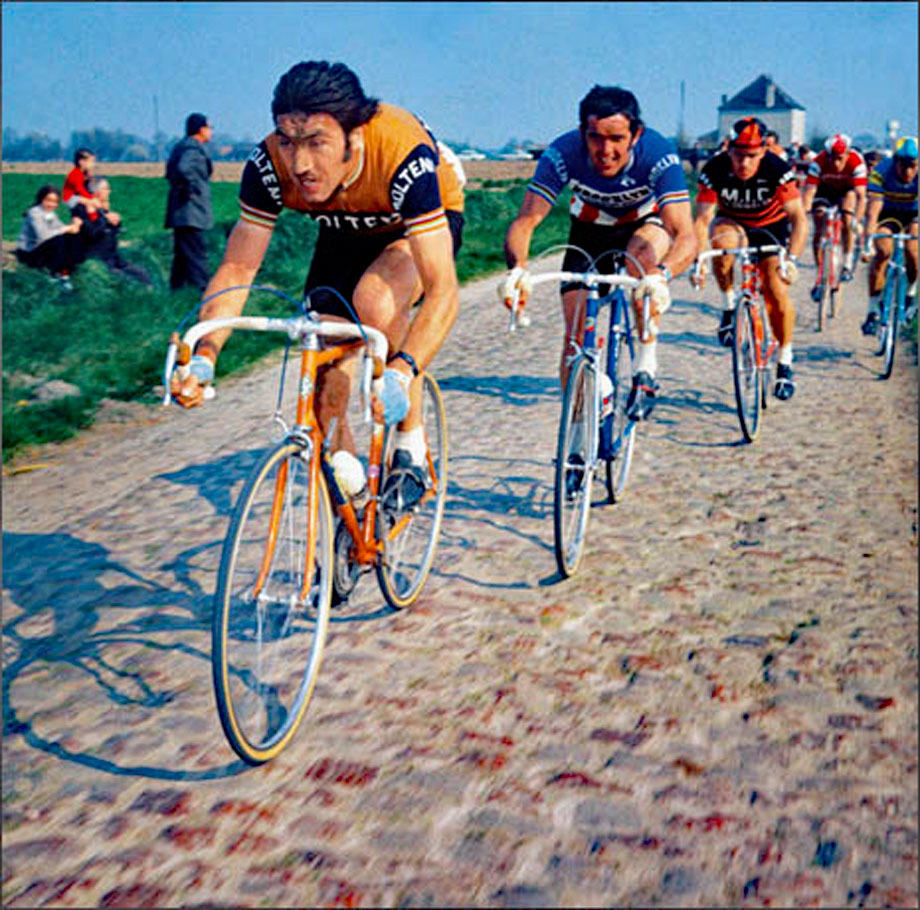 The end came quietly in 1978 when he stepped off his bike in Spring after a small Belgian race in March looking much older than his 33 years and announced his retirement in May. The book does not look much at Merckx the man and there is nothing about his subsequent issues with living outside of cycling and his success with his bicycle company. He remains enthusiastic about cycling and appears at events around the world, still smiling and happily giving autographs. 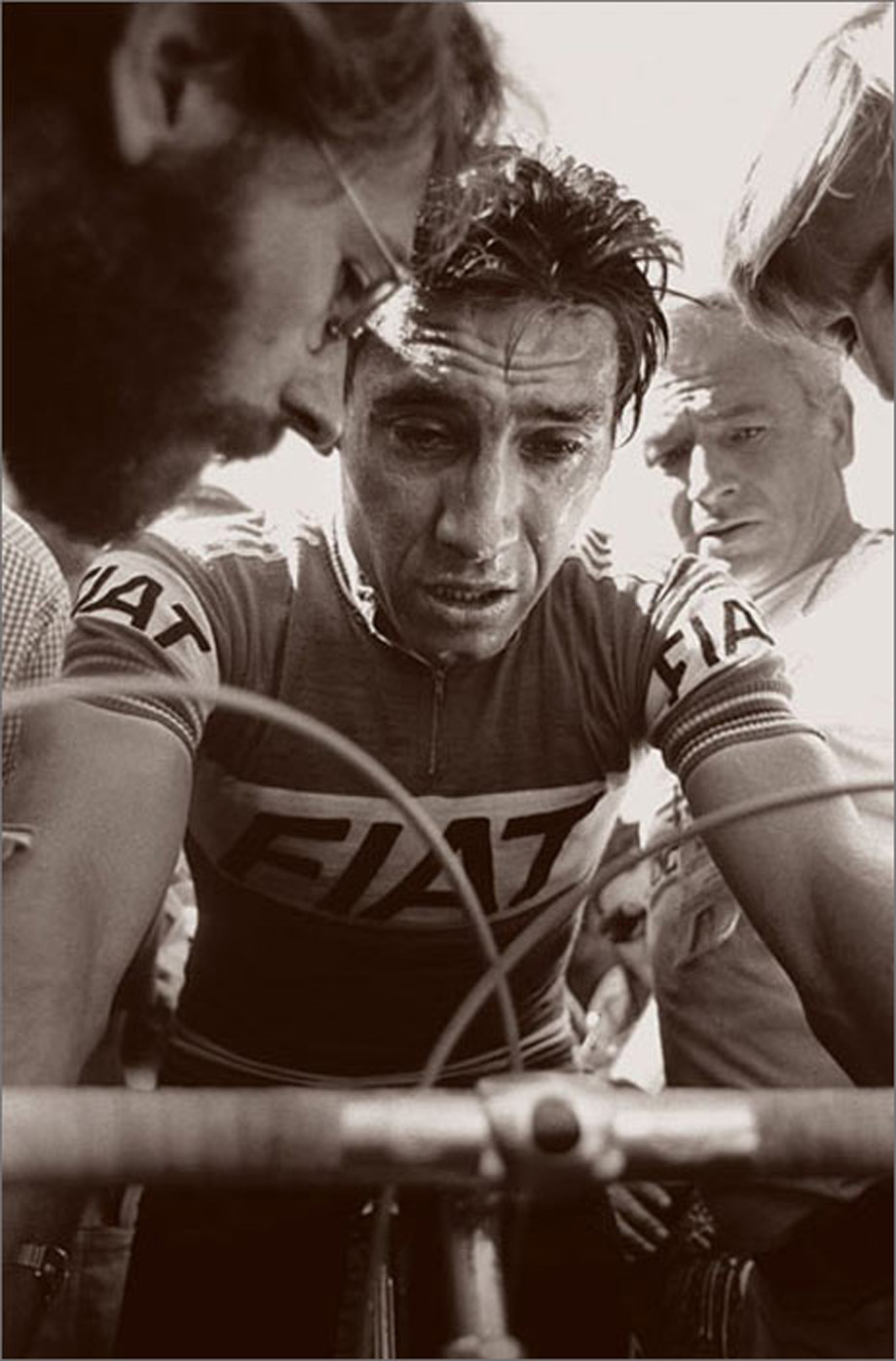 His record of nobility is unprecedented. Merckx took part in 1800 races, of which he won 525: 80 as an amateur, 445 as a pro. Of these, 164 were criteriums. He won 32 classics, 4 world championships (3 of them as a pro), 17 six-day events, 2 cyclocross races and was 7 times the Super Prestige Pernod champion, a season-long competition that denoted the best pro of the year. He won 11 grand tours: the Tour de France five times, the Giro d’Italia as many and the Vuelta once. He wore the Giro’s pink jersey 76 times, the Tour’s yellow jersey 96 times and the golden jersey of the Vuelta 9 times. In 1972 he pulverized the world hour record. The figures are dazzling.

As is this is a book which so well pays tribute to a special era in bicycle racing and would be an exceptional gift for a cycling enthusiast.

And of course an old joke at the beginning of the review requires an old joke to end it: an old pro racer dies and goes to Heaven, where he is met by St. Peter. St. Peter is excited to learn the newcomer was a bike racer. “You will love it here,” he says, “We have time-trials every Wednesday and a crit on Saturdays and you get the latest equipment too.” St. Peter shows the racer the track and the road course. The racer is amazed as he sees the greats of the past: “Look, there’s Coppi and Bartali, and crazy Jean Robic!” But then he sees a familiar figure with a Molteni jersey, riding an orange Colnago and passing everyone. 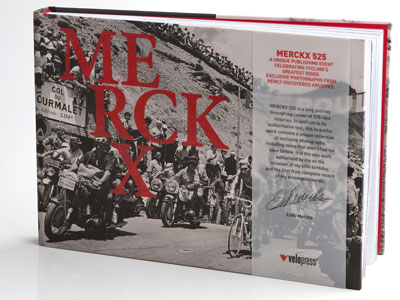 Merckx 525 With an introduction by Eddy Merckx and foreword by Karl Vannieuwkerke
Text by Frederik Backelandt
Translated by Ted Costantino
Published by Velopress, 2012, 222 pp., hardcover
ISBN 978-1-934030-89-9