PEZ Bookshelf: From A to B – A Cartoon Guide to Getting Around by Bike

As focused as we are on cyclesport, it should not be forgotten that the invention of the bicycle was aimed at solving transportation problems, albeit rapidly turning into a recreational and competitive device. The UK’s Dave Walker has followed up his 2017 book of cartoons about road cycling “The Cycling Cartoonist” with a new volume with more of a transportation and environmental focus, with charm and educational value. 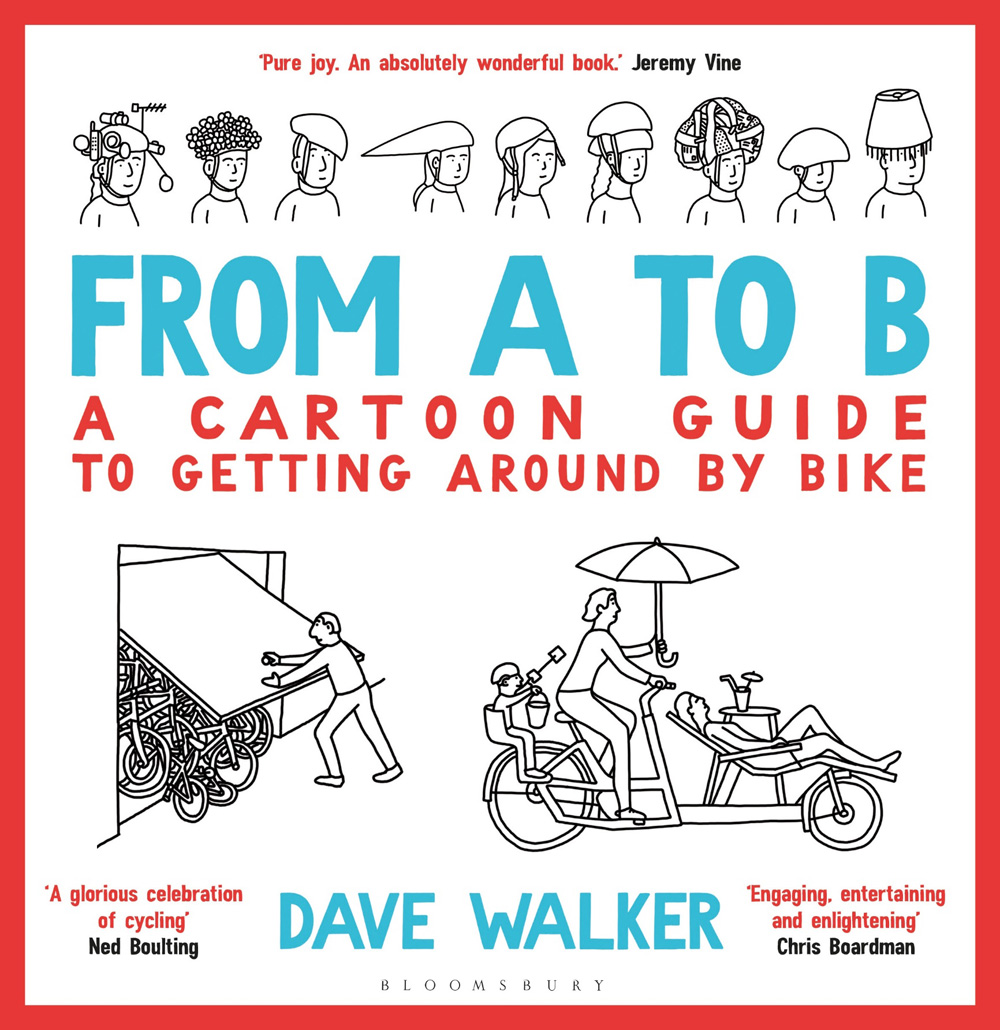 “From A to B: A Cartoon Guide to Getting Around By Bike” is pretty much as its title suggests. The bicycle can serve as an inexpensive and efficient means of transport. The author, whose cartoons have been published in The Guardian and Cycling UK among other other publications, writes in the introduction: “If you are interested in the sport and racing side of cycling you will most certainly still enjoy this book. We just ask that you conduct your racing on an upright Dutch bicycle for the duration.” He continues by indicating “Subjects That May Not Receive a Huge Amount of Attention,” avoiding, thankfully, “dogmatic views about wearing a helmet,” moving to “Things That Are of Slightly Greater Interest,” such as “whether your bike is made of titanium,” to topics that he will probably explore repeatedly: “saying hello,” “finding a lovely bike for sale,” “reaching our destination safely.” 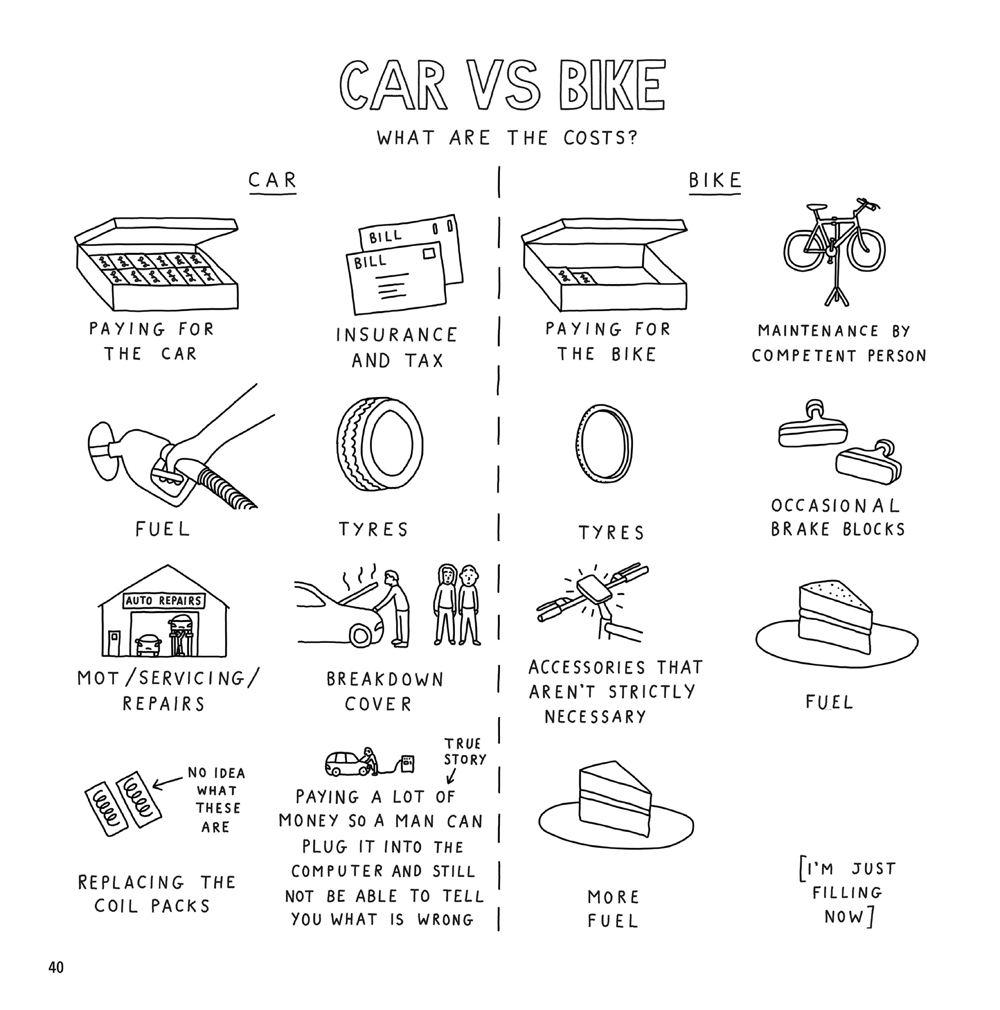 There is no question about Mr. Walker’s enthusiasm for the two-wheeled world (actually he does mention multiple or even single wheels) as the first chapter declares “Cycling is Brilliant,” and goes on to show exactly why that is, through multi-tasking (“seeing friends,” “entertainment,” “showing off your bike,” “drying hair”), or riding with friends, cycling with children, commuting, and even romance. There are lows of course, such as fixing punctures or having to motivate yourself climbing hills. 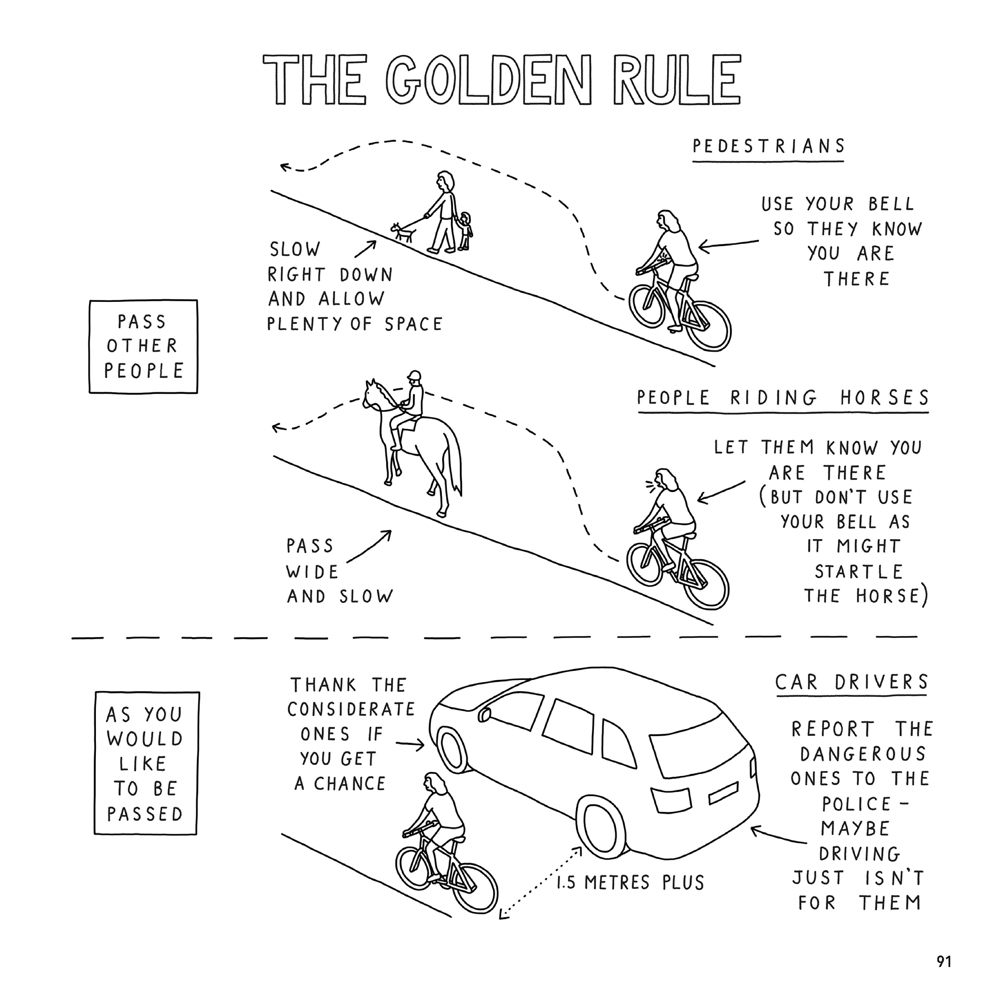 Following chapters provide information on getting started in cycling, finding a suitable bicycle and heading off on adventures, whether near or far. The cartoons are whimsical and their enormous charm is derived from their appearance as something out of Mr. Walker’s stream-of-consciousness. This is entertaining for cyclists of all levels – you will recognize yourself here and there – but actually would be encouraging to those considering taking up the activity. However, it is Chapters 5 through 9 that we head in a rather different direction.

The chapters, “Traffic: Why People Don’t Cycle,” “Safety: What Would Make Cycling Safer?,” “Objections: Complaints About Cyclists,” “Infrastructure: Safe Spaces to Ride a Bike,” and “Cycling: A Force for Good—How to Change the World (On a Bike),” fall much more under the rubric of cycling advocacy although, obviously, you can’t really ride from A to B if the roads are dangerous or there is no place to park your bike. Here Mr. Walker presents his serious case in a palatable way with his charming cartoons. 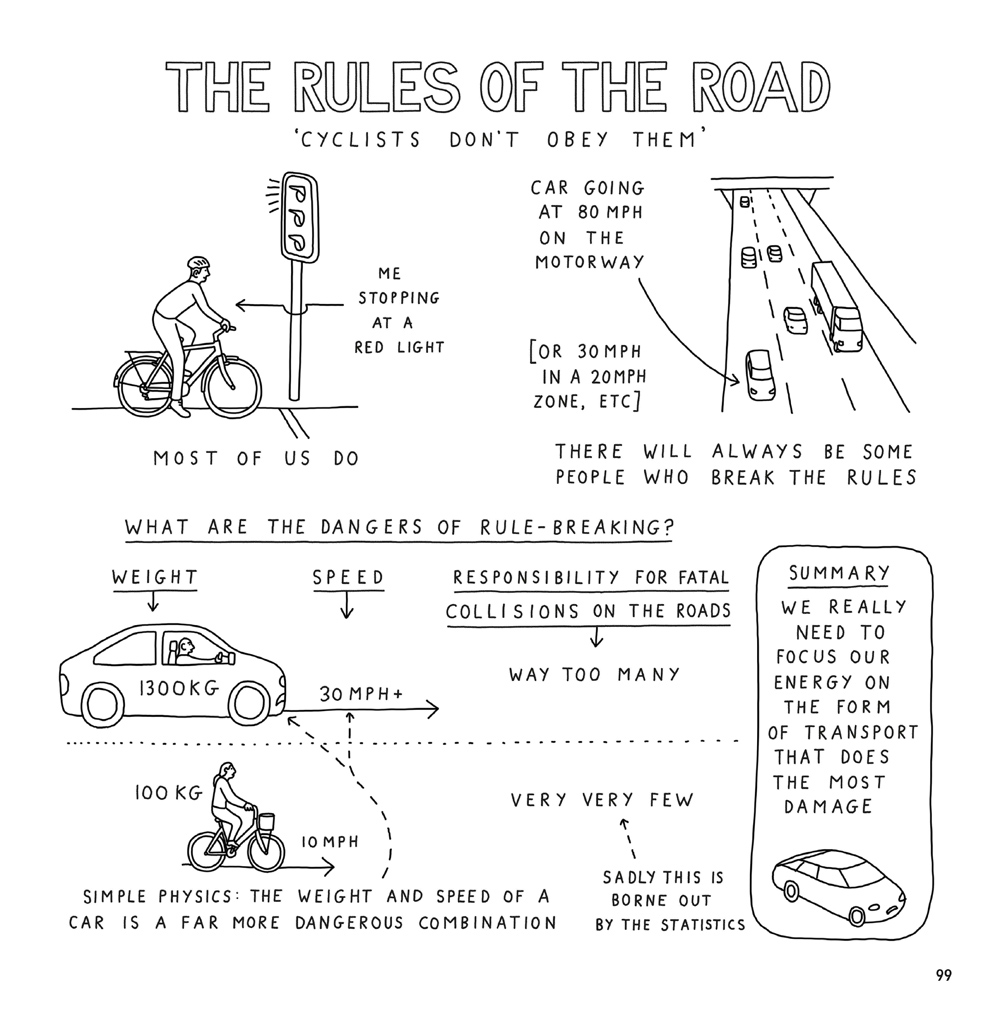 Fighting the auto-centric world is a monster of a challenge but is a worthwhile battle. As someone who lived in car mad Germany for eight years without owning a car (and I enjoy driving), I saw the different approaches taken by different jurisdictions in promoting cycling or ignoring it. The Netherlands and Denmark, usually cited as places where cycling works well, did not arrive at this condition by accident. It has taken decades of effort, and considerable money and public support, to achieve environments with reduced pedestrian and cycling fatalities, reduced air and noise pollution, improved public transportation, safe bike lanes and impressive facilities for parking and maintenance. 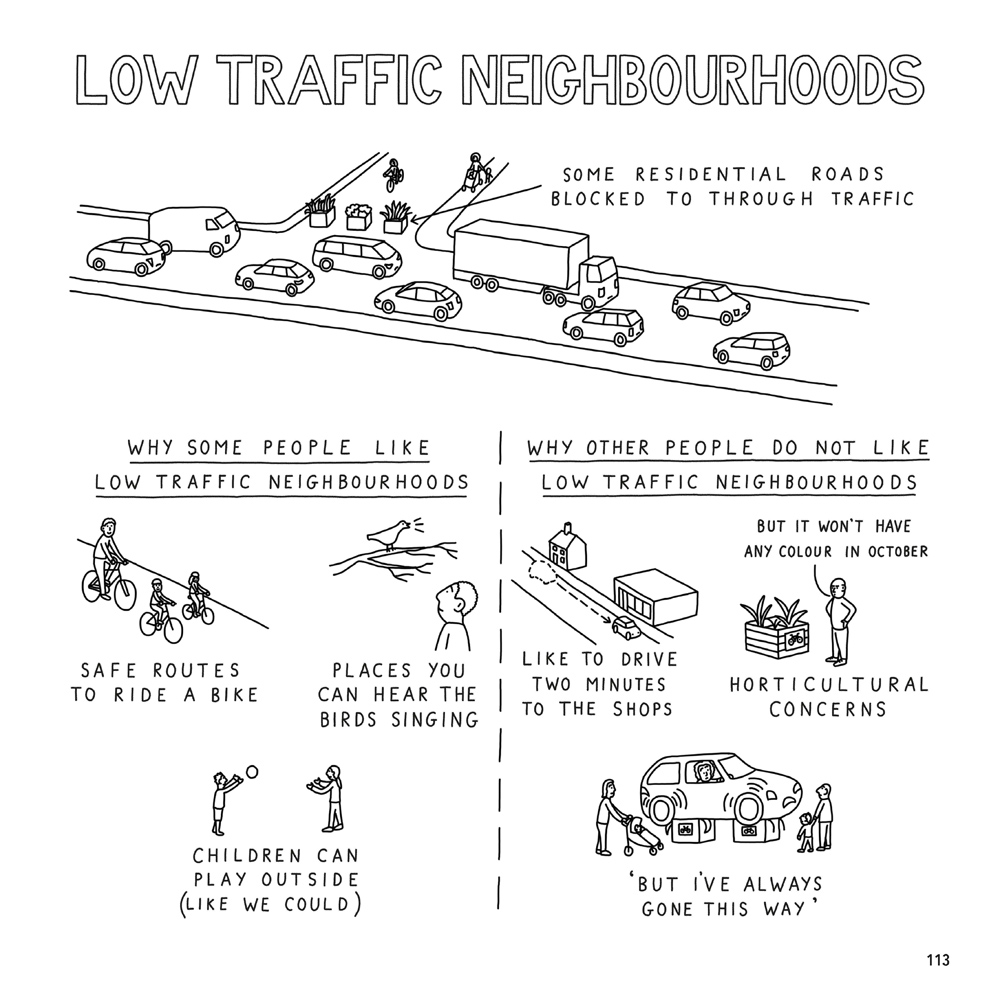 The author (artist?) makes the excellent case of why bicycles can benefit us all without being sanctimonious in any way. All cyclists will recognize the things he highlights, such as infrastructure problems like potholes, poorly maintained bike paths, and (as is the case here in Ottawa, Ontario) “multi-user paths” that put everyone at risk. One can only applaud the idea that perhaps cyclists should design bike routes! However, it is interesting to note that in Canada reduced automobile traffic and the extension of “emergency” closures of roads for cycling has not resulted in an improved fatality rate since the pandemic began. 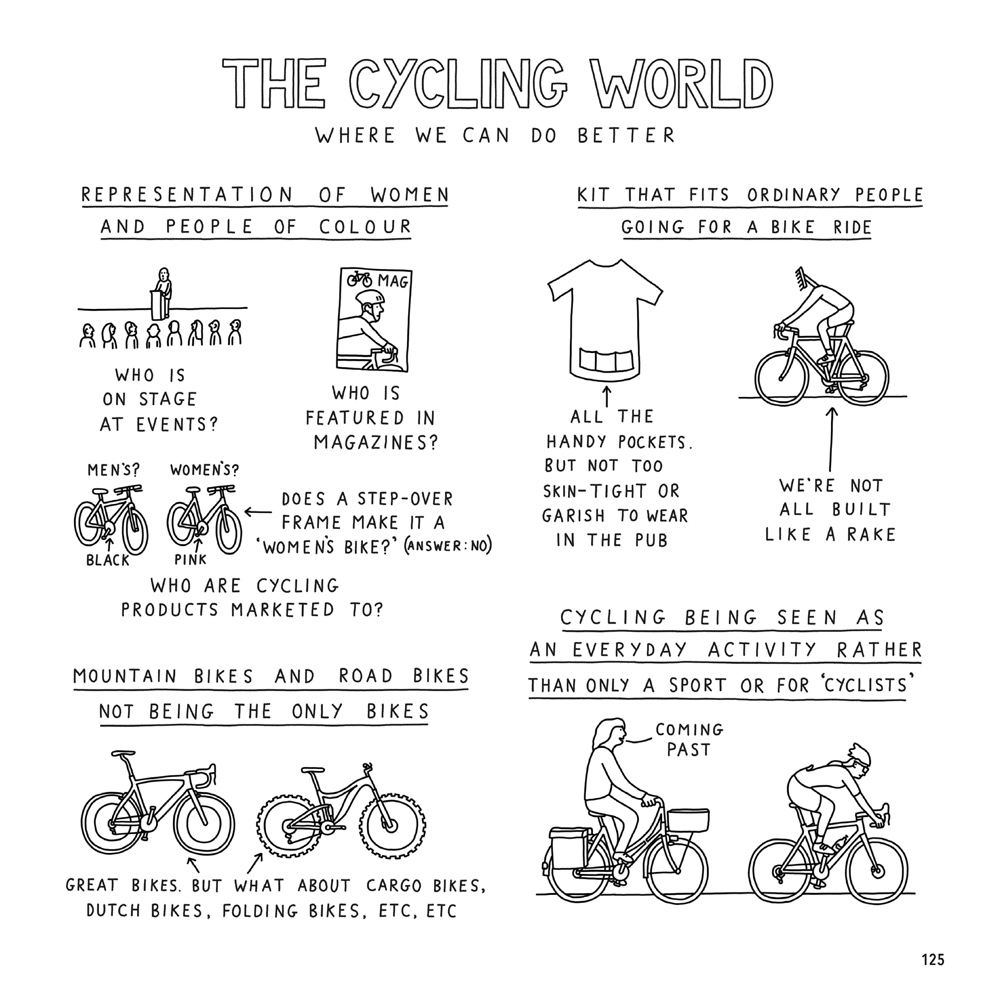 “From A to B” raises many points that should be matters for public discussion. The livability of urban and suburban areas in North America is hampered by the model, developed after World War II, of development that is not only car-centric but simply could not function in any other way. New housing developments sprawl across the landscape everywhere, inefficient and unattractive, but as we have seen in some areas in Europe this does not have to be the case. Mr. Walker, whose cheerful drawings clearly reveal his optimism, points out that the world would be a much better place if we could all ride easily from A to B, in safety and with pleasure, and, well, no argument can be made against that. A lovely book but a thought-provoking one as well. 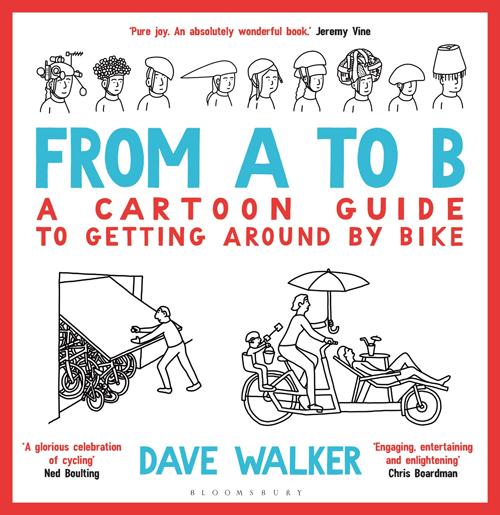 # “From A to B: A Cartoon Guide to Getting Around by Bike” by Dave Walker is available from AMAZON.COM. #