In the late 1990s, Frank Vandenbrouke, known to his fans as “God” or “VDB,” set the professional cycling world on fire with his exciting performances and assertive style but in only a few short years his rocketing star burned out, and the end came in a squalid hotel room in Africa after a decade of spiralling downhill. Celebrities fascinate us and we cannot look away at the ones whose lives, once seeming so charmed, fall apart. 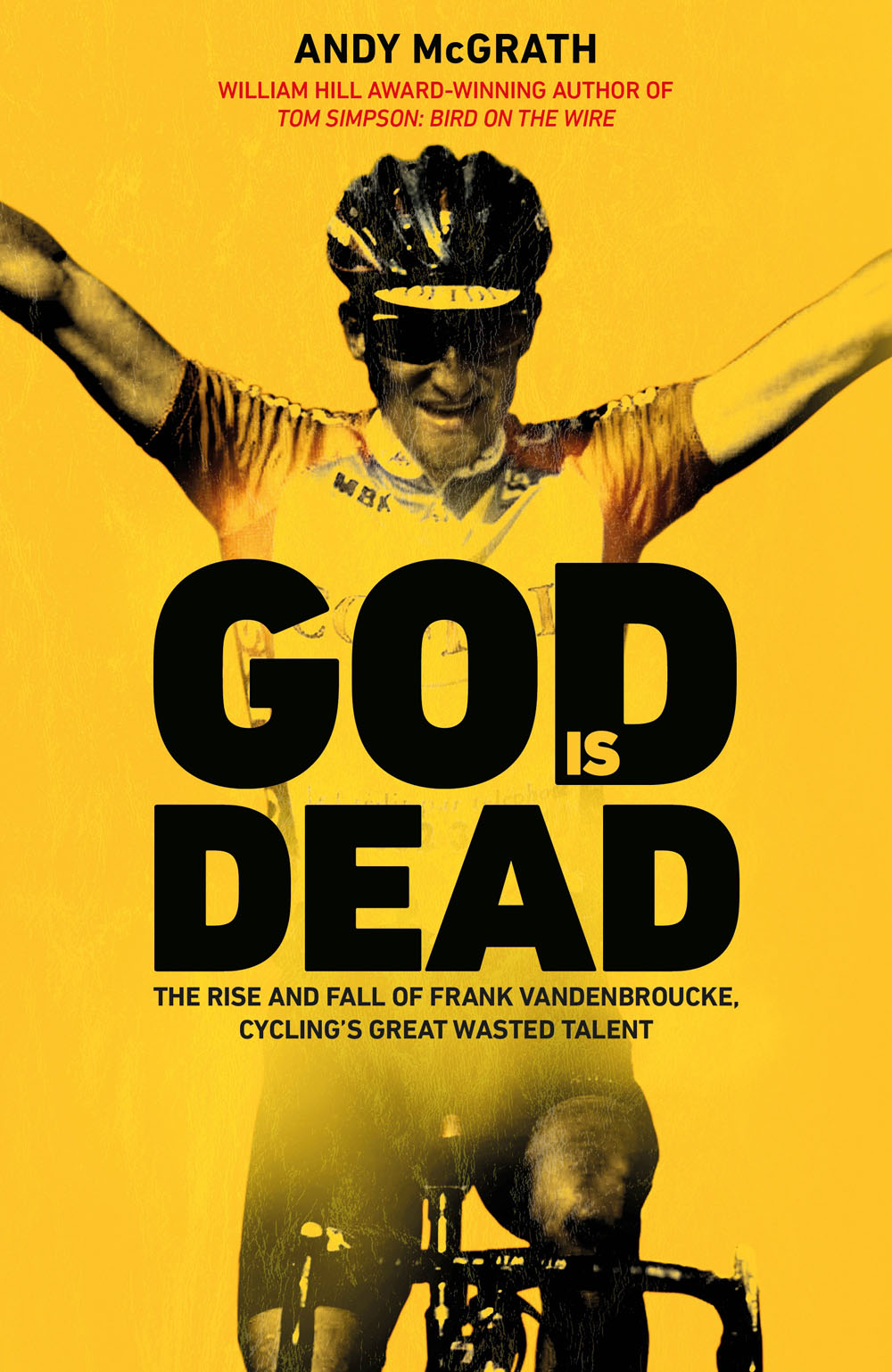 Andy McGrath, formerly editor of “Rouleur” magazine, is the author of a new biography, which one believes may be the first in English, of Frank Vandenbroucke, and my Pez colleague Ed Hood, a VDB enthusiast, rushed out to get a copy and has shared his personal memories of the Belgian Golden Boy in a sympathetic piece that can be found here.

Mr. McGrath is a fine writer and has previously written a book about Tom Simpson, a pro cyclist who also left us too early albeit under quite different circumstances. “God is Dead” is a detailed portrait of a personality who was often supremely confident yet could apparently be influenced to surprising degree. The story opens with his childhood in Ploegsteert, a small Belgian village that is not physically part of Wallonia, the French-speaking part of the nation, but is deemed to be so administratively. Ploegsteert is described by VDB’s cousin as “le trou du cul du monde,” which the author renders less rude in translation but we can accept is in the middle of nowhere. Vandenbroucke came from a family of racing cyclists. (There will be some momentary confusion for the reader here: Frank’s father is named Jean-Jacques, and had younger twin brothers named Jean-Luc and Jean-Paul. Both Jean-Jacques and Jean-Luc raced, the latter winning over 80 races. The other brother, Jean-Paul, was a big fan of his nephew when VDB was flying high but died in 2007 of cardiac arrest, a victim of drug addiction and someone who shared some of his nephew’s personality traits. 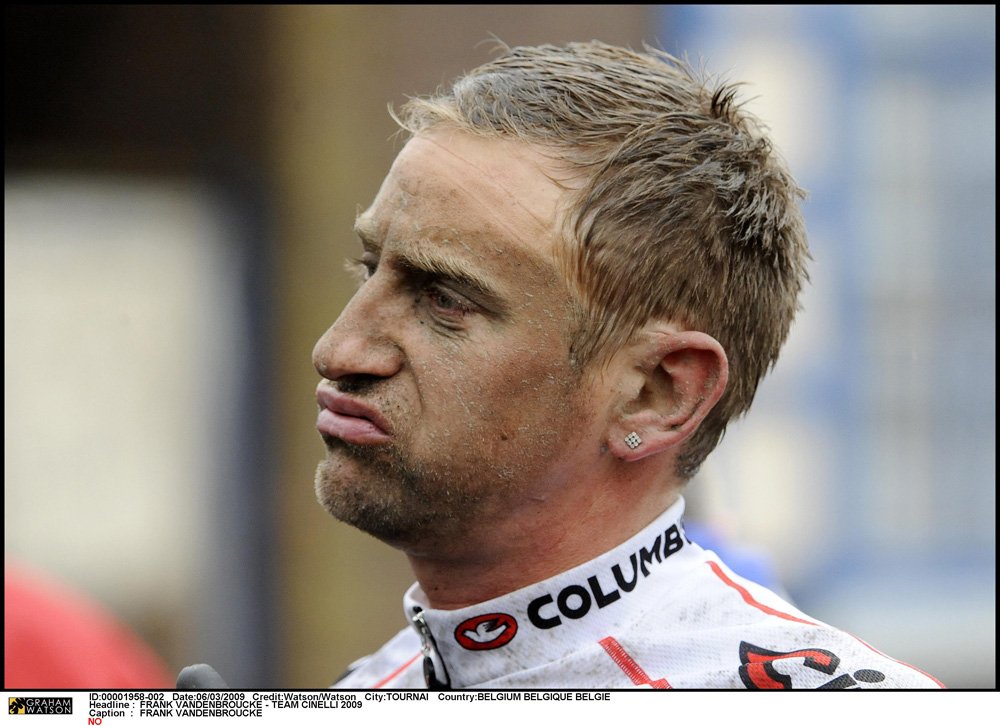 The author paints an evocative image of what life was like for young Frank, growing up in the bar managed by his parents, an inheritance from his mother’s parents. It was in the centre of town and everyone came through. He was an energetic child and the pet of the customers. But when he was five years old, riding his little bicycle, he was struck by a rally car out on a practice session, with the result that he spent six weeks in hospital and his left leg was 1.7 cm shorter than the right, and 2.5 cm thinner. This is quite surprising to read as one of the hallmarks of VDB the Racer was his fluid and beautiful style on the bike.

With his father’s encouragement and coaching (to put it kindly), VDB joined the local sports club at seven and by nine was racing hard, showing a strong competitive streak. His father’s career as a racer had changed to that of manager of the Lotto pro team and he also served as a mechanic for the Belgian national team. In 1989 he accompanied the national team with his father to Chambery and joined the pros on a training ride up Mont Revard—where they were unable to drop the fourteen year old.

In 1991 he won the Belgian national championship for neophytes and, although underage, was given a special dispensation to ride at the World Junior Cycling Championships in Athens, in 1992, where he placed third. A year later he became professional, joining the Lotto team managed by his uncle, Jean-Luc. It seemed like a bad fit and Frank was unhappy at Lotto, jumping ship to the Mapei-GB-Latexco superteam, managed by Patrick Lefevere, and composed of squads of Belgian and Italian riders, an oddity at the time. Three years there and then it was off to French squad Cofidis, where he was from 1999-2000. 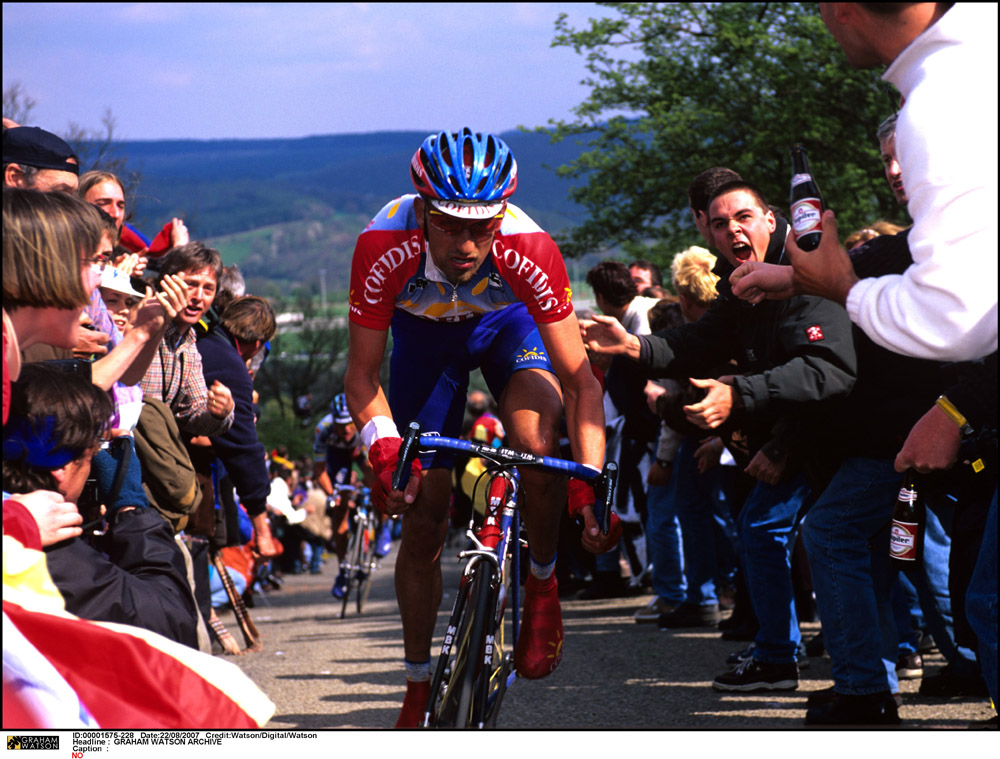 In those six years, Vandenbroucke won more than 80 races, including Gent-Wevelgem, Paris-Nice, Omloop Het Volk and Liège-Bastogne-Liège, as well as stages and the points classification at the Vuelta. But then the Golden Boy’s story unravels. At Cofidis he enthusiastically joined in to the drug culture of team members led by Philippe Gaumont, a French cyclist) and ardent doper who was to die in 2013 of heart failure after being brain-dead in a coma for a month, aged 40). The cyclists used sleeping pills as sleeping after races was difficult but combined with alcohol the pills, which Vandenbroucke was to use for the remainder of his life, caused peculiar behavior and memory loss and were addictive in the quantities being taken.

1999 marked the pinnacle of Vandenbroucke’s career, the year in which he won L-B-L and did so well in the Vuelta, appararently hoping to win the love of a Saeco hostess by winning stages (it worked—well, for a while). It was also the year that he met Bernard Sainz, a cycling insider known widely as “Dr. Mabuse,” although he has no medical training and it is a mystery why his nickname is that of a 1920s German film villain, but there is much about Mr. Sainz that is peculiar.

One of the strengths of this book is the author’s interviews with several people who were key to Vandenbroucke’s life, either influenced by or influencing him. In addition to his own autobiography, “Ik ben God niet” (“I am not God”), published in 2008, there has been another biography written by a Belgian journalist working with VDB’s parents, who would not contribute to McGrath’s project, and his ex-wife will also not speak about him. However, others are willing to and in Sainz there is an important and ambiguous figure, having a remarkable grip on Vandenbroucke while practicing something akin to, well, witchcraft. This was at the same time as the cyclist was seeing a psychologist, Jef Brouwers, in an attempt to straighten himself out. Brouwer’s insights into the personality of his subject are enlightening but so too are his comments about his own role and how, like so many others, he was bewitched by Franky Boy. Vandenbroucke’s behaviour was often hurtful and thoughtless but his personality and charm were such that people were happy to forgive him. He was an exceptionally intelligent person, fluent in four languages, with a great sense of humour but with the will of a spoiled child. 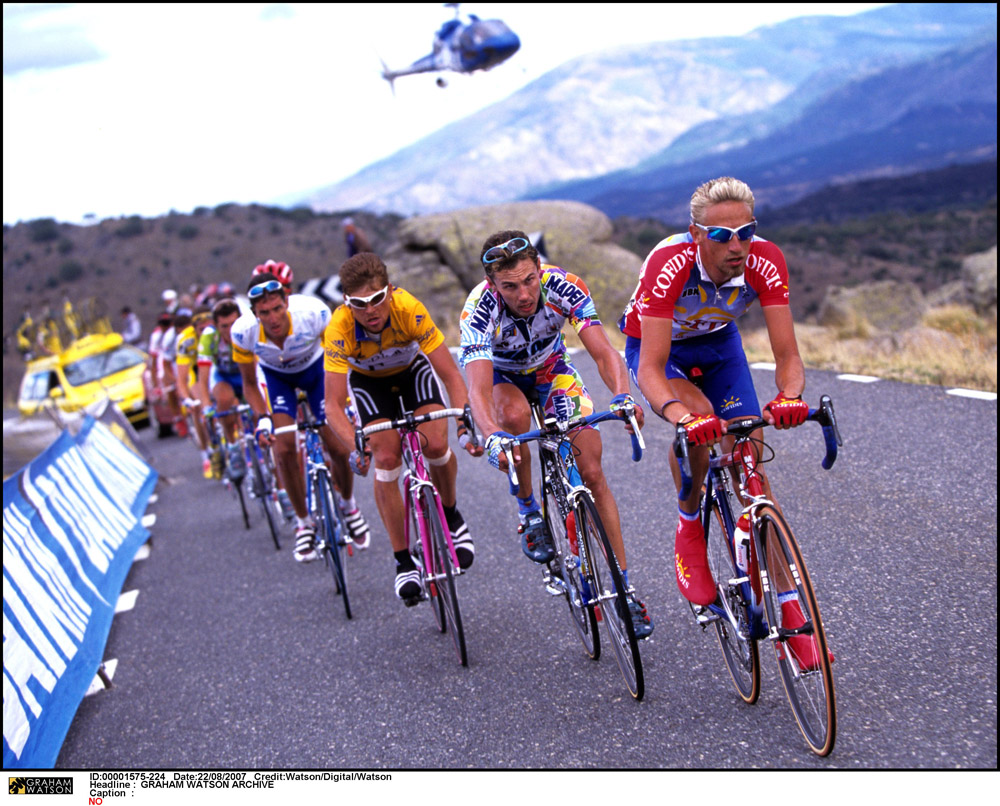 His career fell off the rails after the pinnacle of 1999 and in another decade he would only win a single minor UCI-sanctioned race, winning the time trial at the Boucle d’Artois. He came close to a victory in 2003, making Peter van Petemgen fight for his win, but this was only due to VDB’s enormous natural talent and not to any consistent training. Between 2001 and 2009 he was signed with eight different teams but did not even show up to ride for several of them. In 2006, he even showed up to ride a Gran Fondo amateur event in Italy under the name Francesco del Ponte.

By the time the end came, under somewhat mysterious circumstances in a sleazy hotel room in Senegal, there had been car crashes, suicide attempts, lots of drugs, constant relocation and money thrown away. The fan club at the bar in Ploegsteert went from 450 members to less than 150. Friends and family still meet in the bar, now owned by others, on the date of Frank’s death to celebrate his life.

The closest parallel to the life of Frank Vandenbroucke in pro cycling has to be considered that of Marco Pantani, who also died in a hotel room, aged 34, troubled by drug abuse and the inability to cope rationally with celebrity. Pantani remains a much-adored figure in Italy, while one is not so sure about VDB’s current reputation in Belgium as his glory moment was shorter and his decline far longer.

In “God is Dead” do we find the real Frank Vandenbroucke? The author, in his introduction, writes:

“Life is never simple or necessarily fair, either, and there are many shades of grey among all the black and white. You can do wrong and still be wronged by people and systems around you. You can fulfill a great deal of promise and still squander so much. And you can be adored by so many and still be chasing love till your dying day.”

A finely-written and absorbing book, “God is Dead” is a thoughtful reflection on the roller-coaster of celebrity and the often brutal world of professional cycling, and even knowing how it will end one cannot put it down. 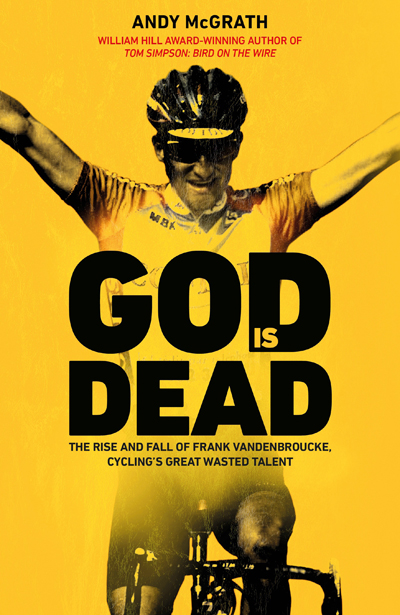