Book Review: It is that time of year when many of us put our bicycles aside and take out the guidebooks and maps and put together the dream trip, the once-in-a-lifetime adventure, the ultimate ride that we will train for all winter and spring and then make a reality in the balmy summer sun next year. An indispensable set of books that every keen cyclist (and book lover) should have is the series of “Great Climbs” books by Graeme Fife covering the Pyrenees, the Northern Alps and the French Alps. Published by Rapha a decade ago and reviewed here, we are delighted that Thames & Hudson has reissued the majority of the Alps books together in a single fine volume – a glorious second chance! 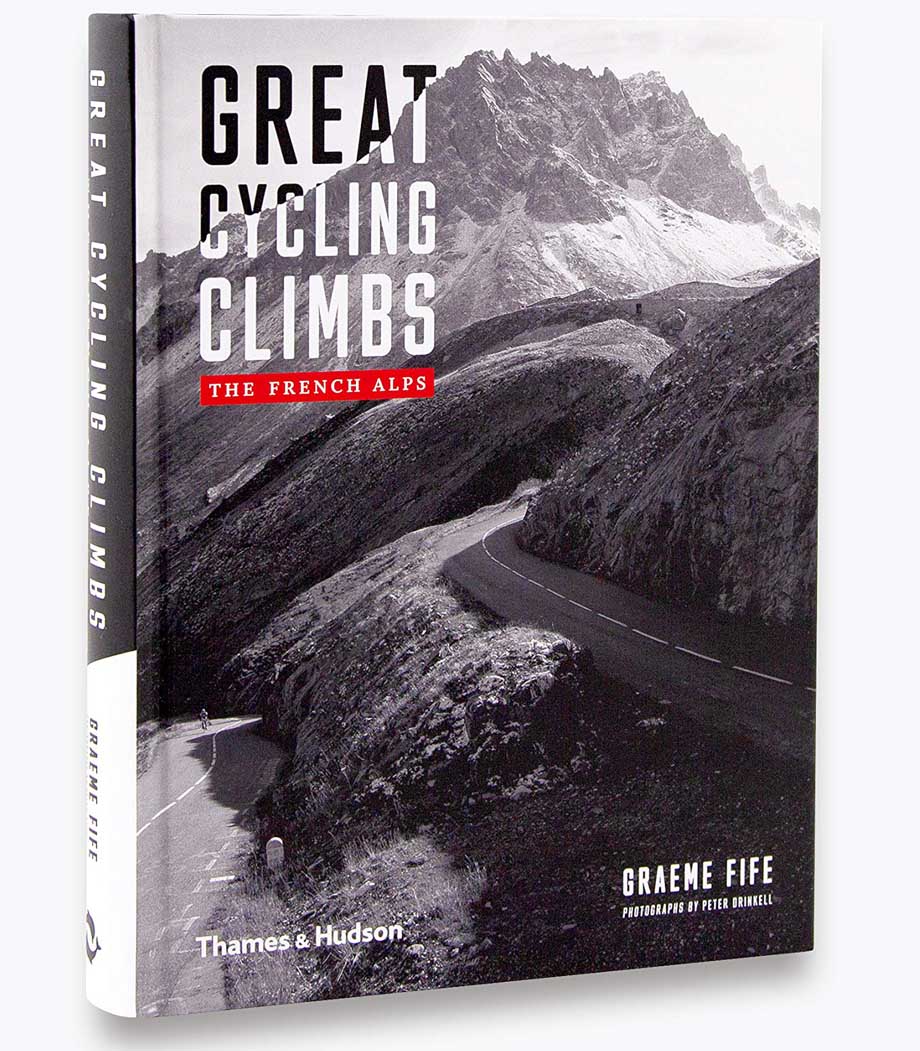 It is by riding a bicycle that you learn the contours of a country best, since you have to sweat up the hills and coast down them. Thus you remember them as they actually are, while in a motor car only a high hill impresses you, and you have no such accurate remembrance of country you have driven through as you gain by riding a bicycle. ~ Ernest Hemingway.

The area covered is divided into seven regions in France: Geneva; Chamonix; Annecy; Chambéry. After a most erudite introduction, touching on geology, Roman roads, fortification construction in the time of Louis XIV, William Blake, and crossing the Alps by bus in 1913, the book begins in earnest, if that term may be used for such a discursive text. Each chapter begins with a brief overview of the region, with an attractive if not-so-detailed line drawing map, followed by a series of truly superb photos by Pete Drinkell, before descriptions of each of the individual climbs is provided. Some of these climbs are quite frightening and the interspersed accounts of racing events (Eddy Merckx blew up here! Ferdi Kübler blew up there! Marco Pantani fell in a heap on the side of the road here!) tend not to make them less so. 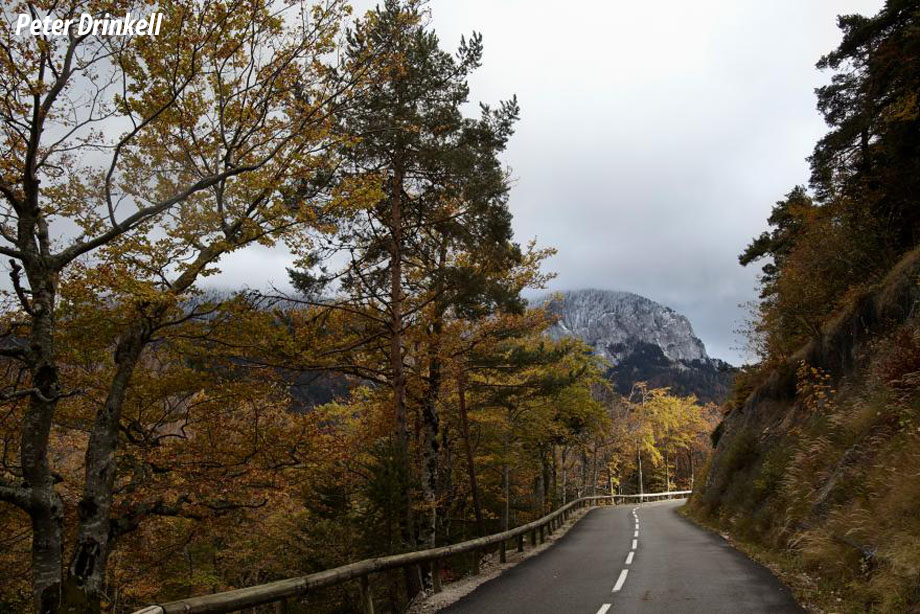 There are plenty of websites that will give you descriptions of approaches and gradients but this guidebook offers so much more than simply technical information. The text is packed with a great deal of peculiar information. For example, Mr. Fife notes the omnipresence of the Virgin Mary in a wide variety of representations. But it is clear that the weight of history has been felt here, with a particular focus on the Romans, the Holy Roman Empire, Revolutionary France, and World War II. Nor has the author overlooked natural history, or word origins.

In addition to Mr. Fifie’s erudition, a highlight of this beautiful book are the astonishingly lovely photographs by Pete Drinkell. The photos are very atmospheric: landscapes with empty roads, with the odd stray cow; some rustic buildings and other signs of human activity – but, one should not make the mistake from this description that there is anything dull or emotionless about these pictures. 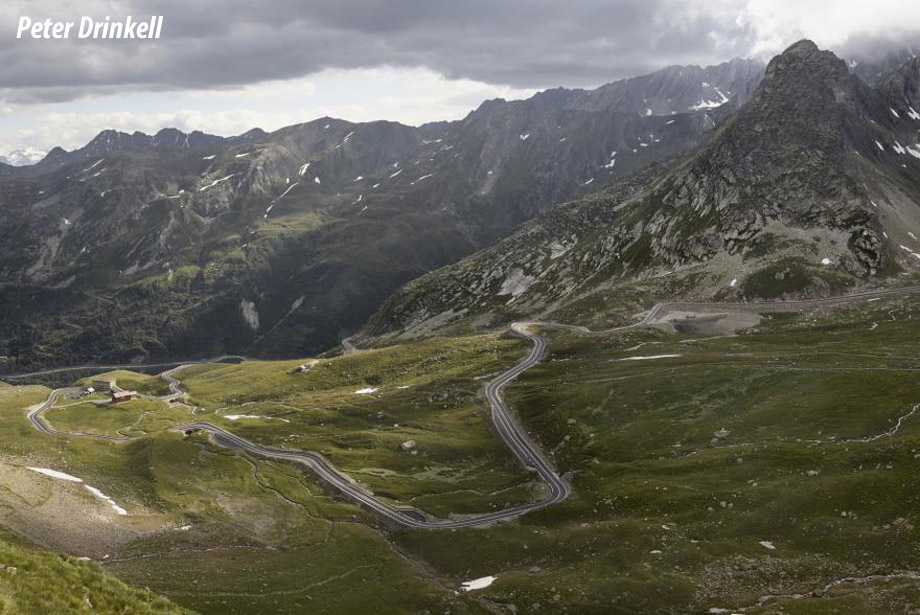 The photographs remain a strong suit and an attractive counterpart to the text’s meanders. With deep but muted colour, they present a sometimes green, sometimes hard rock world, devoid of people and cars. It is just the landscape and always, always, the road. There is a cyclist’s perspective here, and we can feel the quality (or lack of it) of the road surface, the dampness after rain showers, the stone walls towering around us. Curves beckon ahead, and scenic overlooks provide a place to ponder and recover.

The mountain roads covered include passes made famous in the Giro d’Italia and the Tour de France. For example, the first chapter includes the Cols d’Izoard, Vars and Agnel, as well as the aforementioned Bonette, but one of the many joys of this book is the more obscure but interesting climbs covered. Here you will find the Corniche de Drac, the Col du Festre, the Col de Larche—a veritable catalogue of challenges. 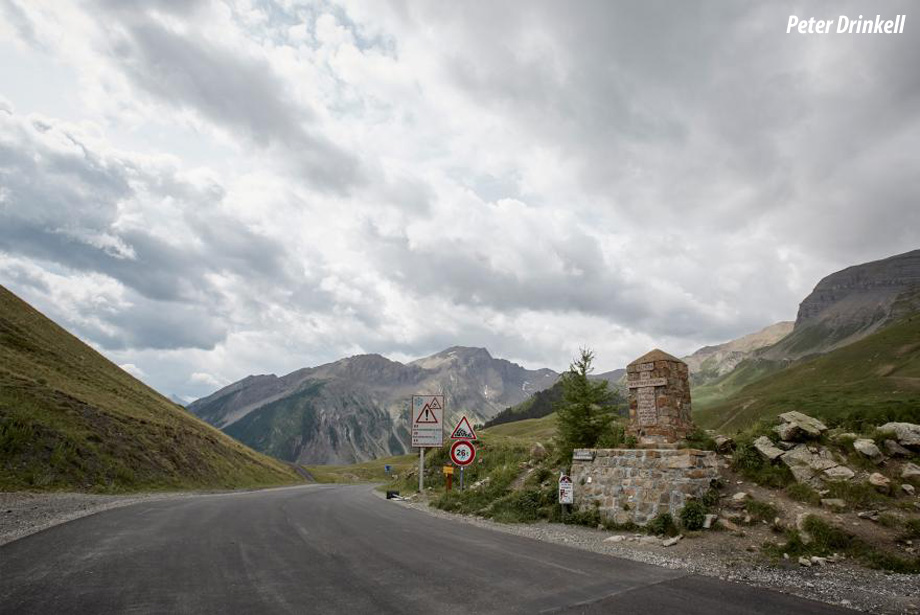 But it is not all about grinding up and down hills and looking at nature. There are tips about places to stay (if even sometimes the innkeepers are “not overburdened with bonhomie”) and a good bit of information on regional cooking and specialities. And I must say that I regret not stopping for an omelette as the top of the Col de Vars now that I read Mr. Fife’s account of it.

One of my most enjoyable cycling trips was in 2008 when I travelled the Route des Grandes Alpes, including a number of climbs in this book. Reading it now, it not only makes one want to revisit the cols but to try undiscovered ones as well. One of my most memorable climbs is included: the Col du Granon, which was the highest summit finish of the Tour de France until the Galibier in 2011 and was where Greg Lemond crushed Bernard Hinault’s hopes of a sixth Tour de France win in 1986 (which Fife does not mention). 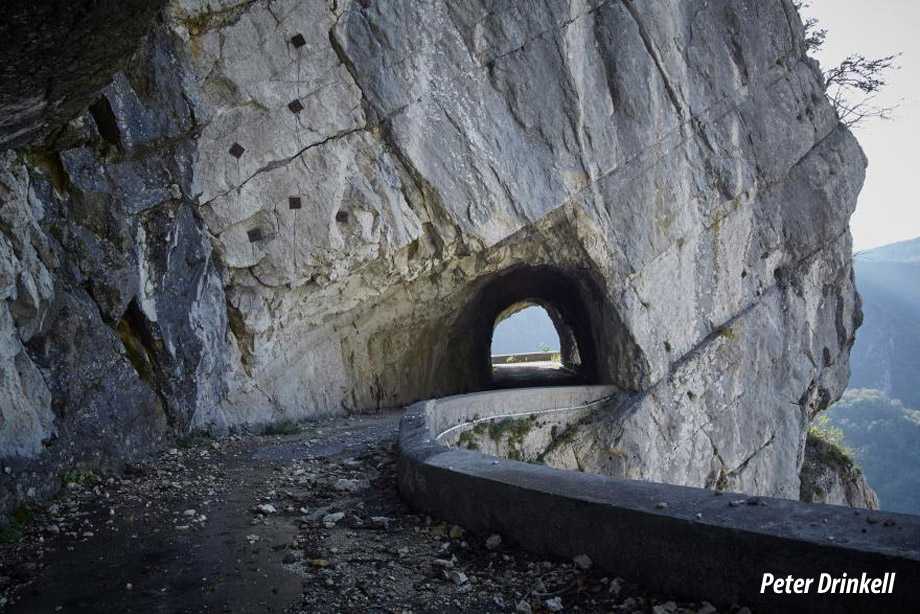 The Col du Granon is very hard. It is 11.5 kms in length and offers no respite as it averages nine percent, with a maximum grade of eleven percent. The author could have described it, if he was writing some kind of normal guidebook, in a straightforward way but no. Instead he describes driving up thusly:

Reader, when you get the chance to approach the lonely summit that is the Col du Granon, do as I did: go at six o’clock on a summer morning, when the light in the valley is of silvered pewter, the peaks of the ranges to the south-west, the summits at the edge of the Massif des Ecrins, are brushed with the dawn sun’s white gold and the world is still.

He begins this section by quoting from a Belgian novelist who walked up Mount Fuji thinking about Zoroastrianism; he goes on to mention a bust-enhancing bra flask (does such a thing exist?) and make a joke at the expense of actor John Wayne. This is typical of Graeme Fife’s writing, a deluge of weird facts that would be tiresome in lesser hands but brings alive the mountains. He writes of word origins in local dialects; the actions of the Resistance in World War II; interesting flora and fauna; particular incidents in the Tour de France in 1959; the writing of Tchaikovsky’s Violin Concerto; and the passage of the Romans. 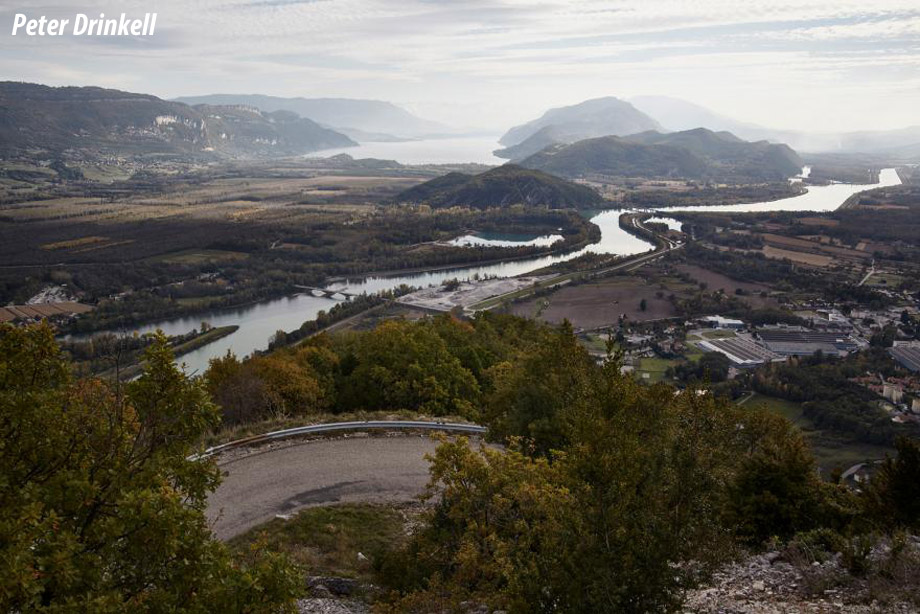 Typical, if that word can be used, is the four page segment devoted to the Col de Saxel, an 8 km climb unknown to me. It offers fine views of Lac Léman and the col is described as undistinguished. But Mr. Fife livens it up pretty quickly as he writes about the Celtic settlers in the area who ended up allied with the Romans. Next we segue briefly to a Savoyard hymn, then a German massacre in 1944 as we follow the road through some intermediate cols. A reference to local accordion music elicits this truly classic paragraph:

The doyenne of French accordionists, Yvette Horner, accompanied, in both senses, 11 Tours de France, 1952-1964. Born Ivana Qukovci, of Serbian origin in Tarbes in 1922, she was paid by Calor, a race sponsor, to travel in the publicity caravan on board an open-topped Citroлn Traction-Avant in floral dress, silk scarf and Mexican sombrero, pumping out a repertoire of French boulevardier tunes and light classics.

The author takes us further along the road, with yet more intermediate cols and some ski facilities before heading down into Morzine, which he does not seem to like very much, describing it as “a heap of ski junk.” However it does provide him with the opportunity to discuss an outbreak of mass hysteria in the town in 1837, and then again in 1843, when the Bishop of Annecy, attempting to perform an exorcism, had to flee for his life. It is with some relief that the Col de Saxel description ends in Les Gets, which is apparently is now the Capital of Mechanical Music but was once thought in local legend to have been founded by Jews exiled from Florence in the 14th Century. 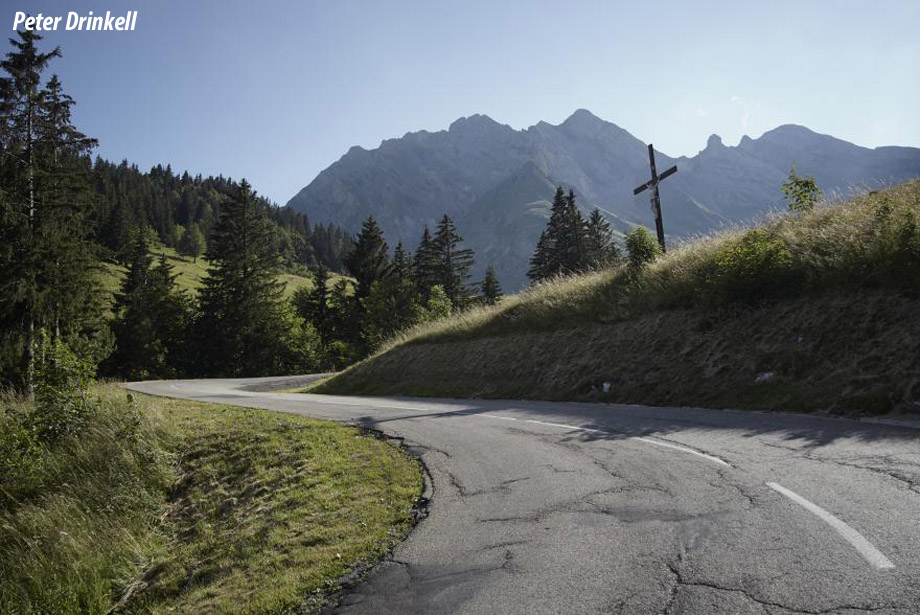 There is clearly a whole lot to think about while grinding up all those eight percent grades on your bike. Has there ever been a guidebook for road cyclists like this before? Graeme Fife provides good descriptions of what you can expect to experience on each of these wonderful climbs and his diversions provide an entertaining complement to the cool and tranquil photographs of Pete Drinkell. The maps are useful for getting one’s bearings but what makes this book special is the sense that you are travelling in some kind of Neverland, strange and beautiful.

It is not a guidebook that merely gives directions to the traveller but instead envelopes the reader in the myths and the realities, the layers of the past both of human and natural history, languages, food, and everything that intrigues us there among the exposed bones of the Earth in the French Alps. A beautiful book and a welcome return! 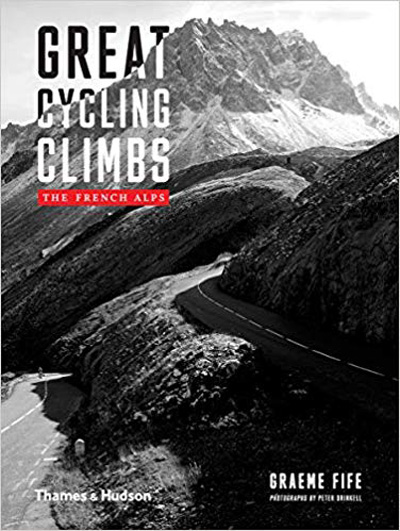 All photos are from the book and by Peter Drinkell.

When not pining for a book on the Swiss Alps, Leslie Reissner may be found going completely downhill at www.tindonkey.com