By Leslie Reissner On Aug 18, 2019
Share
Like PEZ? Why not subscribe to our weekly newsletter to receive updates and reminders on what's cool in road cycling?

Ah, Bella Italia! For many of us it is the Promised Land of Cycling, with its tifosi and gregari and espresso and professional cyclists whose names could be those of opera singers. A new book from Australia relates the story of cycling in Italy, interwoven with an historical narrative of the country which, only unified in 1870, barely predates the 1880s emergence of the safety bicycle itself. Leslie Reissner reviews “Great Rivalries – Cycling and the Story of Italy” by Kevin Andrews. 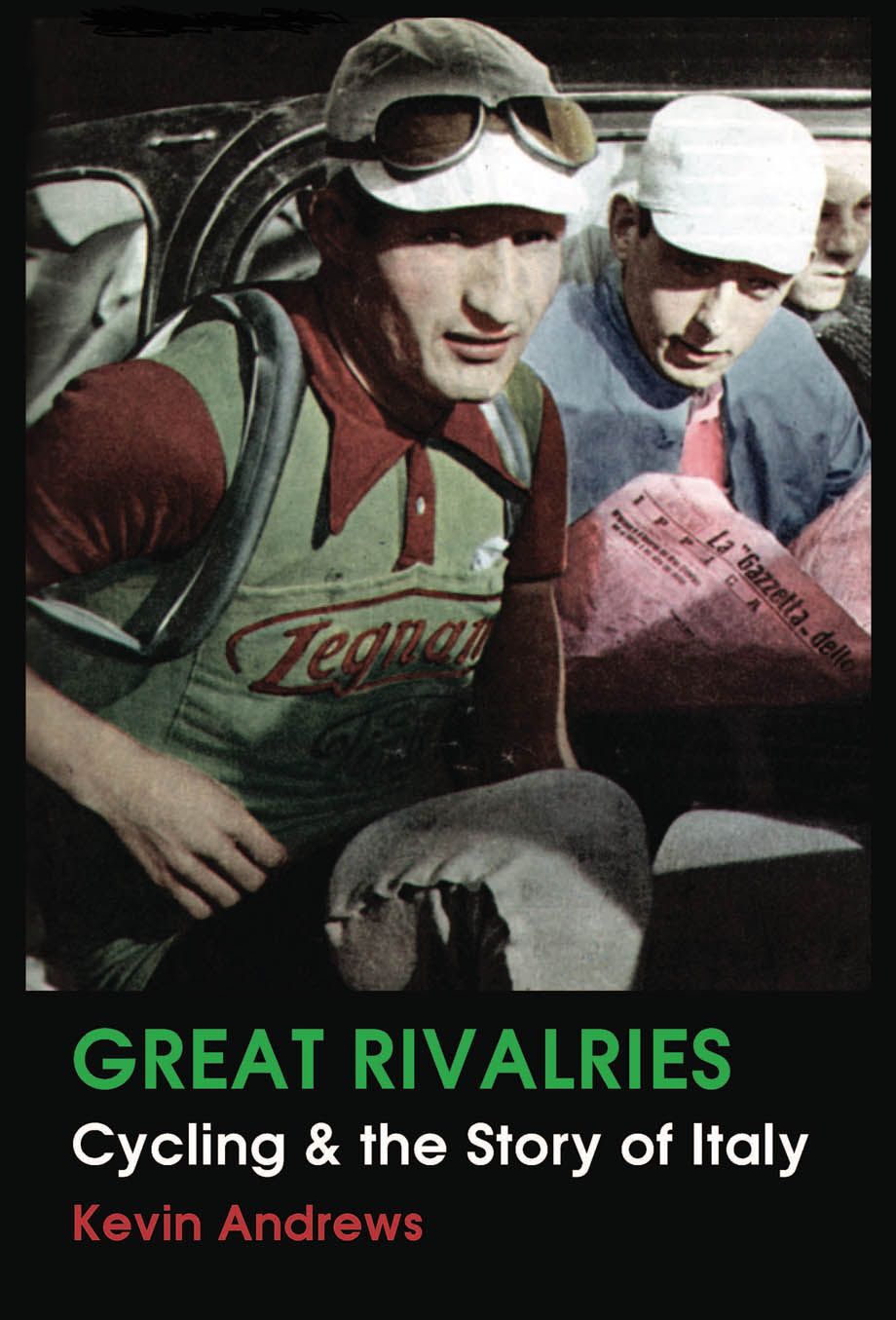 “Great Rivalries” by Kevin Andrews is actually two books in one. Chapters alternate between an account of Italy’s cycling greats emerging from the dawn of pro racing to stories of the country’s political development into the 1950s, the latter being as tortured and near-disastrous as the worst of the Giri d’Italia—and some of those races were really terrible.

When one thinks of “great rivalries” in Italian cycling, there is one so obvious that books alone have been written on each protagonist. Although only four years apart in age, Gino Bartali and Fausto Coppi were cyclists who seemed to compete in different eras but were in constant collision when their time overlapped. Neither came from wealthy backgrounds, both were Northern Italians (Tuscany and Piedmont), but there was nothing similar in their personalities except the will to win that characterizes great athletes. Yet this greatest of great rivalries, which can only really be compared in the cycling world to Anquetil vs. Poulidor (or maybe Everyone vs. Merckx), only shows up in this book around Page 154. 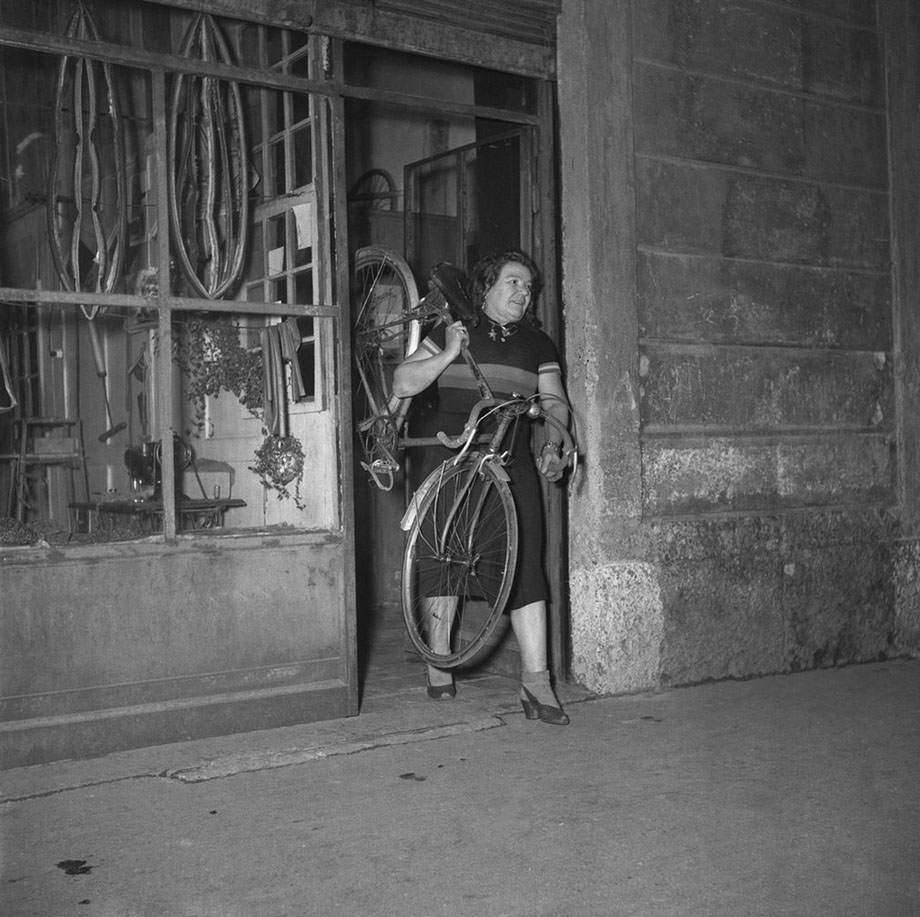 Alfonsina Morini at her cycling shop on Via Varesina in Milan. Morini is the only woman to have competed in the Giro d’Italia she took part in the 1924 race

There is a lot of ground to cover before that as the author relates the story early races in Italy, such as Milan-Turin in 1876, then Milan-San Remo and the Giro di Lombardia, before going onto the Giro’s inception. We are introduced to a collection of interesting personalities, such as the first Campionissimo, Costate Girardengo, or “the Red Devil,” Giovanni Gerbi. The Giro is not easy today but in its first decade it was insanely difficult. The loopy 1914 edition, whose average stage length was over 400 kms, saw only eight of the original 81 competitors make it to the end.

Many familiar names appear—Ganna, Binda, Guerra–but as well we are treated to the heroics of cyclists who only were known in Italy. The 1924 Giro was won by Giuseppe Enrici, who was born in Pittsburgh but was apparently thoroughly Italian, so much so that Andy Hampsten remains the only recognized winner from the United States. With the exception of the Tour de France, one has the impression that European pro cycling, probably into the early 1950s, was very parochial in nature and that cyclists tended not to cross borders. 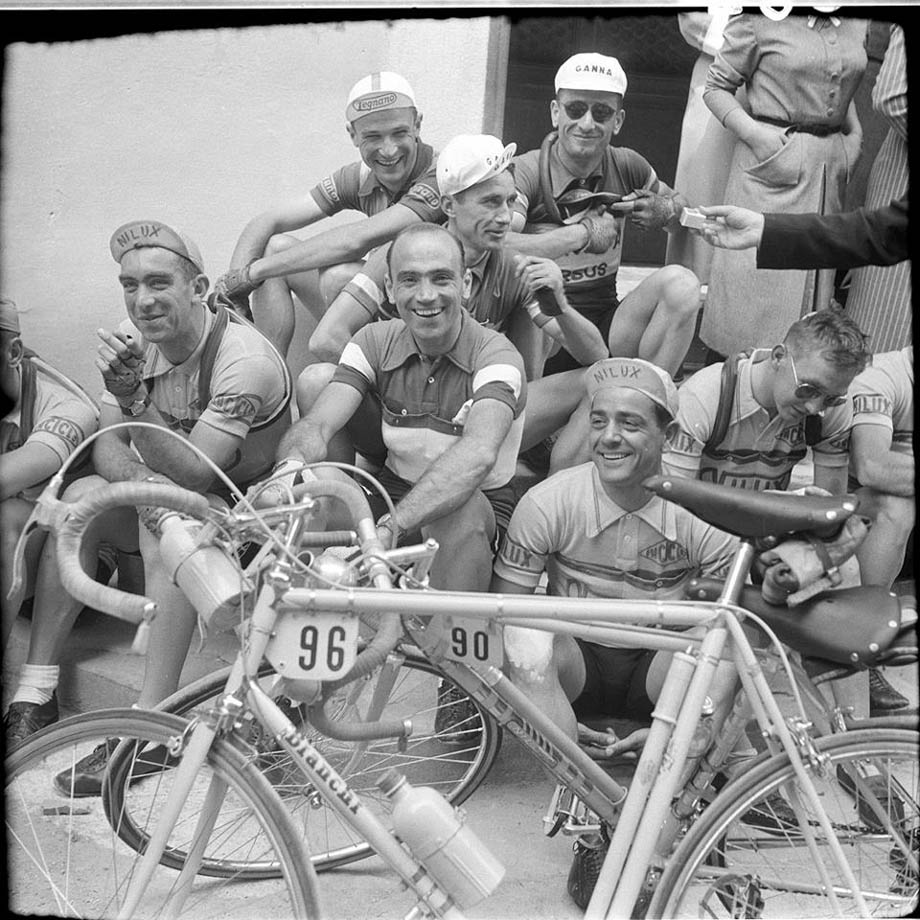 Cyclists at the 1952 Giro, including the first Australians ever to compete in the race as members of the Nilux team

The author was a sports commentator and race caller before studying law and the chapters that focus on racing and race personalities in “Great Rivalries” are entertaining. However, the political and economic history of Italy is less successful as it is often difficult to see how it relates to the other half of the book. There is considerable detail, covering Italian foreign policy, the nature of domestic political parties, fallout from the defeat of the Papal States, Mussolini’s rise to power, the relationship of the Vatican with Nazi Germany, the personalities and goals of several Popes, agrarian poverty, and so forth. While Bartali was a friend of a long-serving Italian Prime Minister and was supposedly asked to win a stage at the 1948 Tour de France to distract Italians following the attempted assassination of Communist party leader Palmiro Togliatti, there is not much here connecting the great movements of history with some guys grinding up the Turchino Pass.

It is hard to admit that one is tempted to skip through some of the passages that cover ground more familiar and better presented in specialized history books. The author has combined several of his own interests here: in addition to being a keen recreational cyclist and Masters’ competitor (and his son rides for a UCI Continental team), he is an Australian Member of Parliament who has held Ministerial rank and he has involvement with various Catholic organizations. 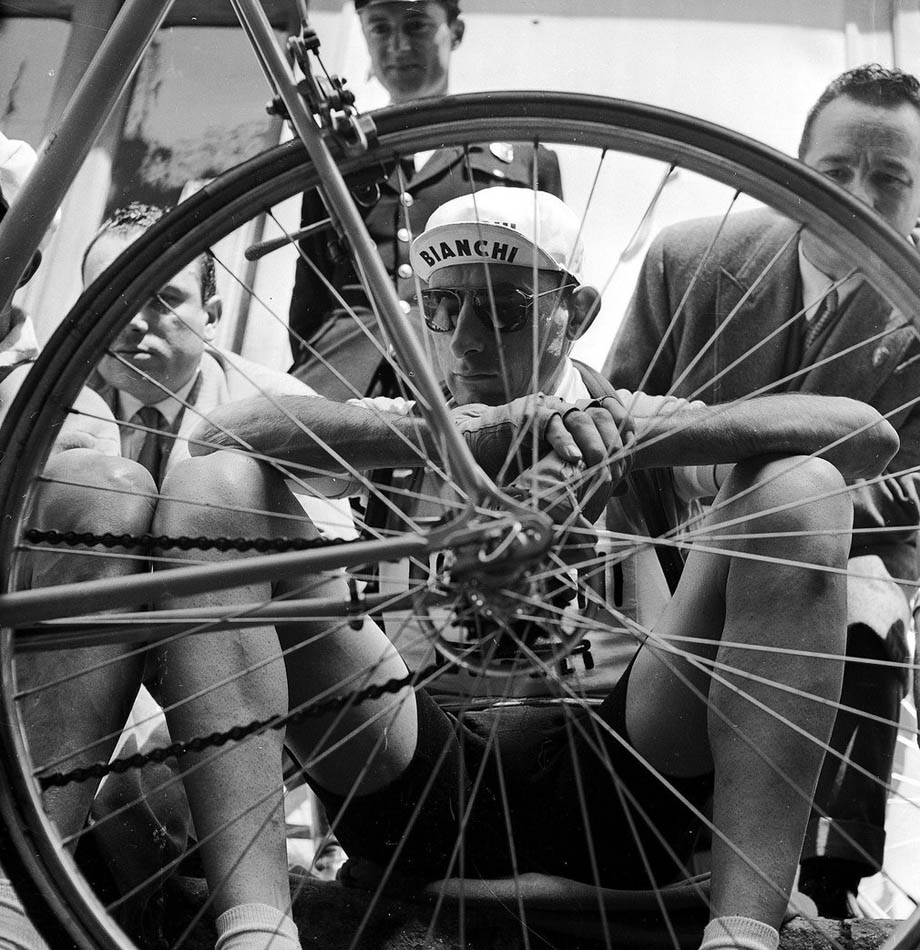 There is much that is worthwhile in “Great Rivalries,” such as the story of the Giro di Guerre, a wartime replacement of the Giro d’Italia run in 1941 that awarded points following eight classic races, including Milan-San Remo and was won by Bartali. It is amazing to think that races continued in Italy at this point of World War II, and just as remarkable was the resumption of racing so soon after hostilities concluded. The first post-war Primavera was in March 1946 and the 30th edition of the Giro went ahead later that year amidst the rubble.

The immediate post-war period saw the rise of Fausto Coppi as one of cycling’s greatest but Gino Bartali, while slowly declining, was still a major force. When one thinks of Eddy Merckx in the 1970s scooping up so many victories his rivals complained he left nothing for others, it must have felt the same way in Italy in the late 1940s to mid-1950s when Coppi and Bartali seemed to alternate winning every major race in the country, and picking up three Tours de France as well. Such a degree of domination is unknown in modern cycling—although Julian Alaphillipe has surprised everyone in 2019! 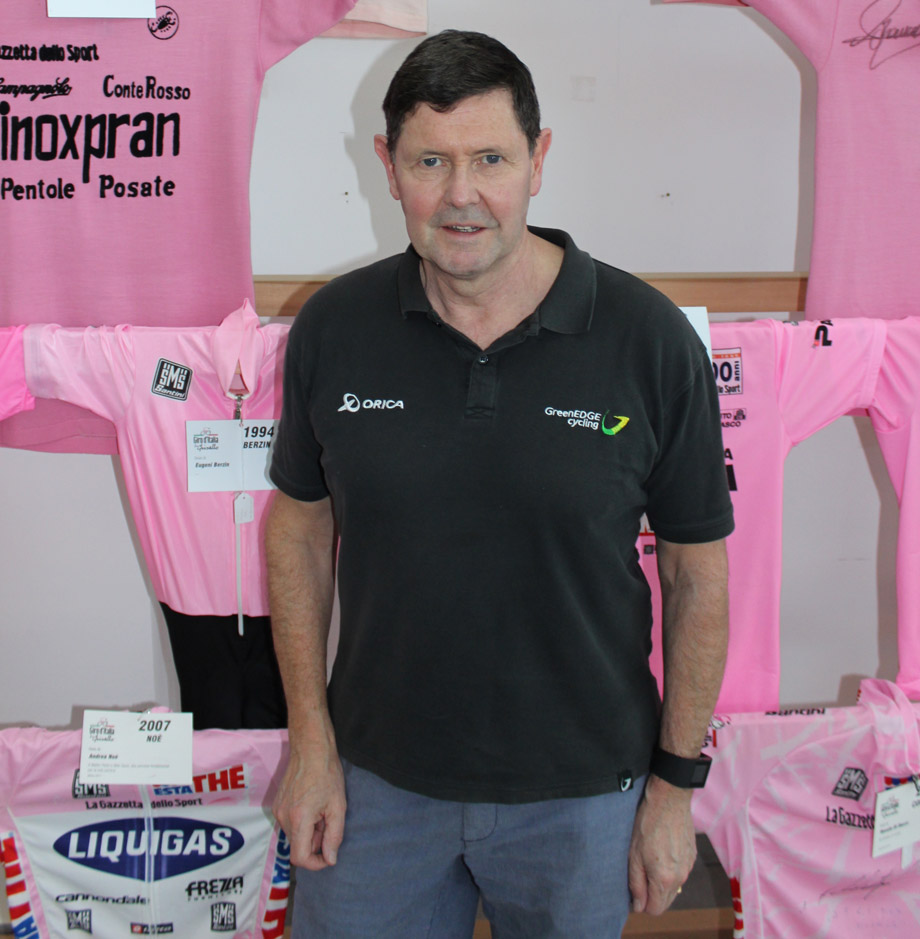 The book concludes with an unexpected chapter about Australians racing in Italy. Milan-San Remo winner Simon Gerrans contributed the Foreward to the book.

“Great Rivalries” is a good read for those interested in bike racing in Italy (and who isn’t, really?) and if the political history does not integrate so well with the remainder of the story at least it was a brave attempt. Not so praiseworthy is the startling number of typos in the text, my favourite being “chicken hoops” instead of “chicken coops.” It is a symptom of our modern world that spellchecker software seems to have replaced editors. An editor would also have identified “Dutchman Knut Jensen” correctly as Knud Jensen from Denmark and—horror of horrors!–not indicated that double Tour de France winner and Belgian cycling star Sylvere Maes was Swiss! 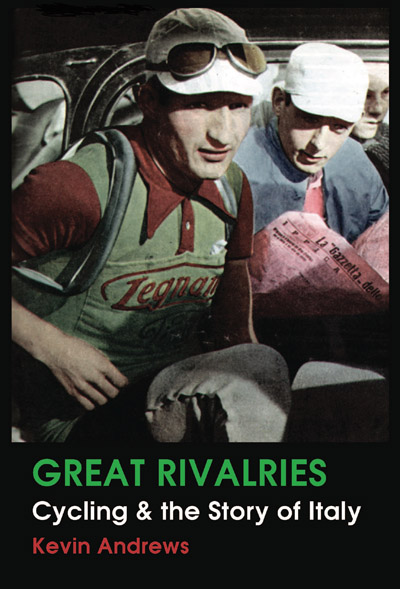 Photos here are from the book.

“Great Rivalries—Cycling and the Story of Italy” by Kevin Andrews is vailable from AMAZON.COM and the publishers at: www.connorcourtpublishing.com.au.