Interview: Book author, TV pundit, journalist… salsa dancer! The talent list goes on for Matt Rendell. Apart from his life in cycling, Rendell has a love for Colombia, Ed Hood managed to track Matt down for a chat about his latest book, and a lot of other things, ‘Colombia Es Pasión’. 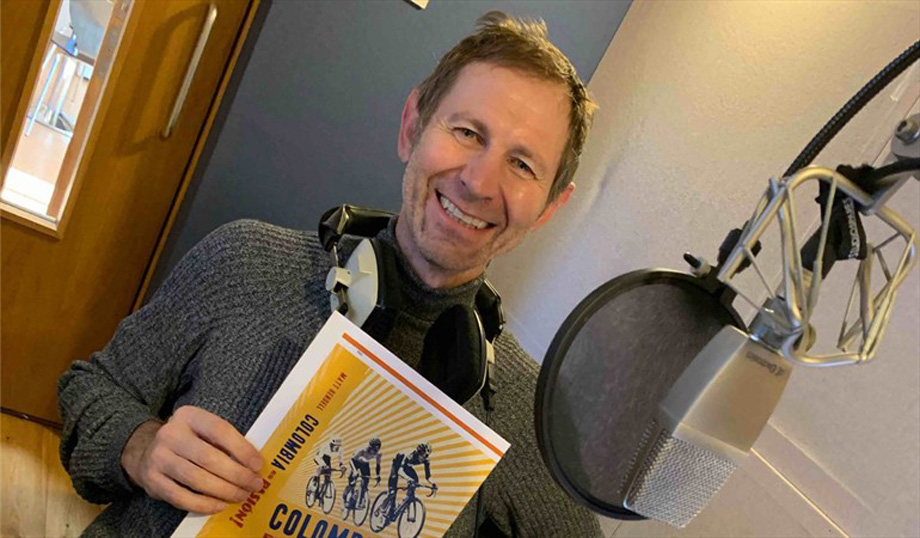 That Matt Rendell bloke, who’s on the tele, always asking folk questions? Isn’t it time someone asked him some questions? Especially since he’s got a new book out about one of his passions; Colombian Cycling – ‘Colombia Es Pasión.’ But how did Sen. Rendell get involved in this cycling lark to begin with? And one never has to be concerned about one line, ‘Sean Kelly answers’ from this guy.

Matt Rendell: It’s a bit circuitous, but here goes. . .
I was a jazz musician in my early 20’s; I suffered tendonitis in my wrist so couldn’t play for eight months. That’s a vocation like professional cycling where you’re so absorbed in it that you forget about the outside world. I decided that since I couldn’t play I’d hitchhike around Europe, I ended up staying with friends in Italy, learning Italian and sitting on their sofa to watch the 1991 Giro on TV. This was a piece of Italian culture that I was unaware of; here were these guys from 30/35 nations all trying to win but where they came from and what was going on in their heads was what fascinated me.

PEZ: You never raced?
I was a runner, my Grandad was a runner; he was a training partner of the New Zealand runner Jack Lovelock who won the 1500 metres at the 1936 Olympics. But no, I never raced, my mum bought my brother and I second hand bikes for a fiver each when we were boys and the first thing I did when I got my first salary through as a lecturer was to buy a bike. 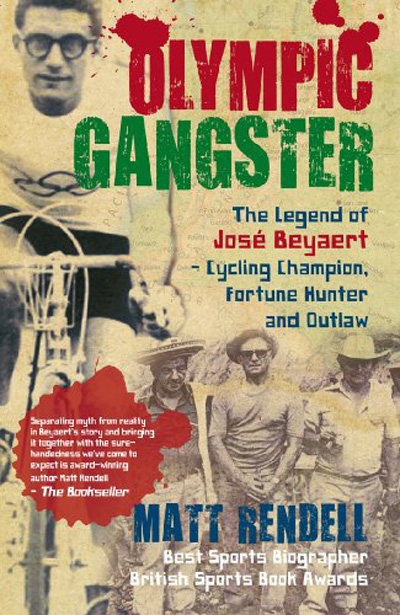 PEZ: Martin and I used to see you at the Giro, you were on staff were you not?
I was but that was before 2016 when I committed my version of Brexit [would that be ‘Matrexit’ or maybe ‘Matricide?’ ed.] and told all my trading partners that I was changing direction and joining the Movistar team on the media side. Movistar told me that they wanted the team and Nairo Quintana in particular, who’s a friend of mine, to be more accessible. But the truth is that was a sham and after five months I realised the mistake I’d made and went back to Mauro Vegni the Cycling Director on the Giro and asked if I could come back? He just said; ‘I told you not to go and work for a team!’ but then added; ‘we’ll find something, you can be my PA.’ And I’m back in the family again. 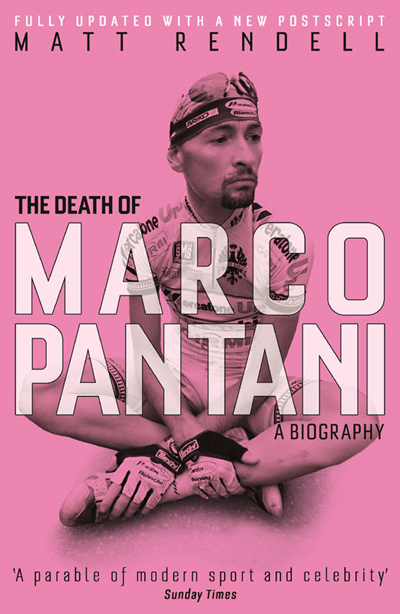 PEZ: Your book, ‘The Death of Marco Pantani’ – that must have got you a lot of grief from ‘the Faithful,’ it pulls no punches on his ‘kitting up’ activities?
It’s never been published in Italy because I couldn’t afford to defend the frivolous law suits which I know it would attract. I’ve had death threats over it but that just proves I’ve done my job properly. What upsets me is that on the tenth anniversary of his death there was a deeply unethical panel show obsessed with the lie that he was murdered. But as Andrea Rossini, the local journalist who’s the ‘go to guy’ on the life and death of Pantani and who gave me great assistance in writing the book, said to me; ‘only conspiracy stories sell books.’ It wasn’t just Pantani that was messed up at the time – and there’s little doubt he was a vulnerable man – the whole sport was corrupt in that era. But perhaps we’re all complicit, getting high on watching those dope-fuelled exploits on TV that we used to see in the mountains in those days? 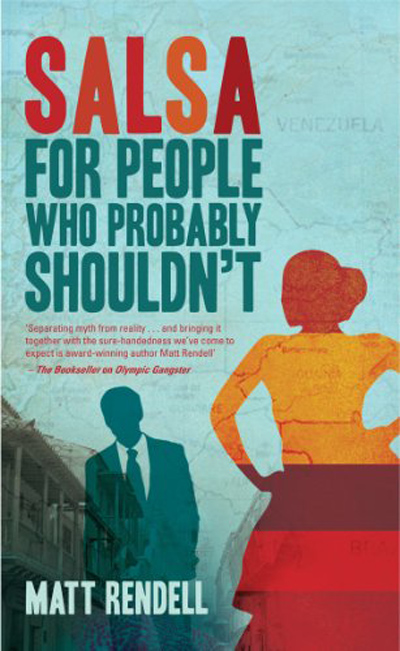 PEZ: Where do your fascination with South American cycle sport come from?
It’s another circuitous one… Salsa dancing, I think? After I came back from Italy I spent a year washing dishes, I had a mullet then, I looked like Eric Vanderaerden but with big ears. I was walking along Upper Regent Street and passed the Polytechnic and the thought came to me that I had to do something with myself unless I wanted to wash dishes for the rest of my life. I went and I spoke to the head of the school, she was Italian and she agreed that because I could speak Italian I could come and study the language with them. It was a really cosmopolitan place with many nationalities represented – Guatemalan, Chilean. That Lambada record was on the go at the time and I thought it would be fun to learn Spanish; that was relatively easy once you mastered Spanish. I did well with my Italian because I knew it was my last chance and put in a huge amount of work. I became a university lecturer and whilst I enjoyed the interaction with the students I arrived at the conclusion that I wasn’t cut out for an institutional career. I decided I was going to cycle the length of South America from Ushuaia on the southern tip of Argentina to Peru – and that’s how I ended up in Colombia pretending to be a cycling journalist. 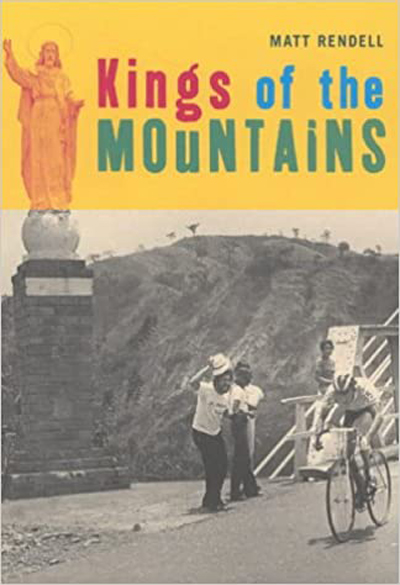 PEZ: Your book about the Colombian riders, ‘Kings of the Mountains’ sells as paperback on Amazon for £44:00 and hard back for £308 [04/05/20], how come?
It’s the first book written on the subject, to those in Colombia it was the; ‘the fish aren’t aware of the water they swim in’ syndrome. That was just the way things were but I was an outsider looking in and asking the questions that whilst of little interest to the Colombians were interesting to other outsiders. It’s been translated into Spanish and is the main work on the subject in that language. It’s been out of print here for ages, so long in fact that the rights have reverted to me, I never made any money from it but one of these days I’ll update and re-issue it – so if you have one, best sell it now! 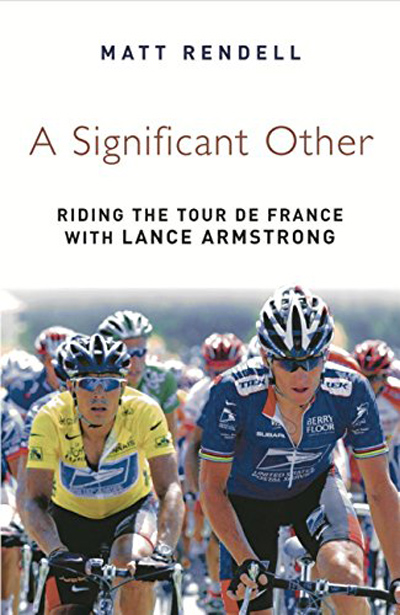 PEZ: But I can buy a copy of, ‘A Significant Other’ your tome about Victor Hugo Peña in le Tour on Lance’s team for £0.01.
Anything associated with Lance… 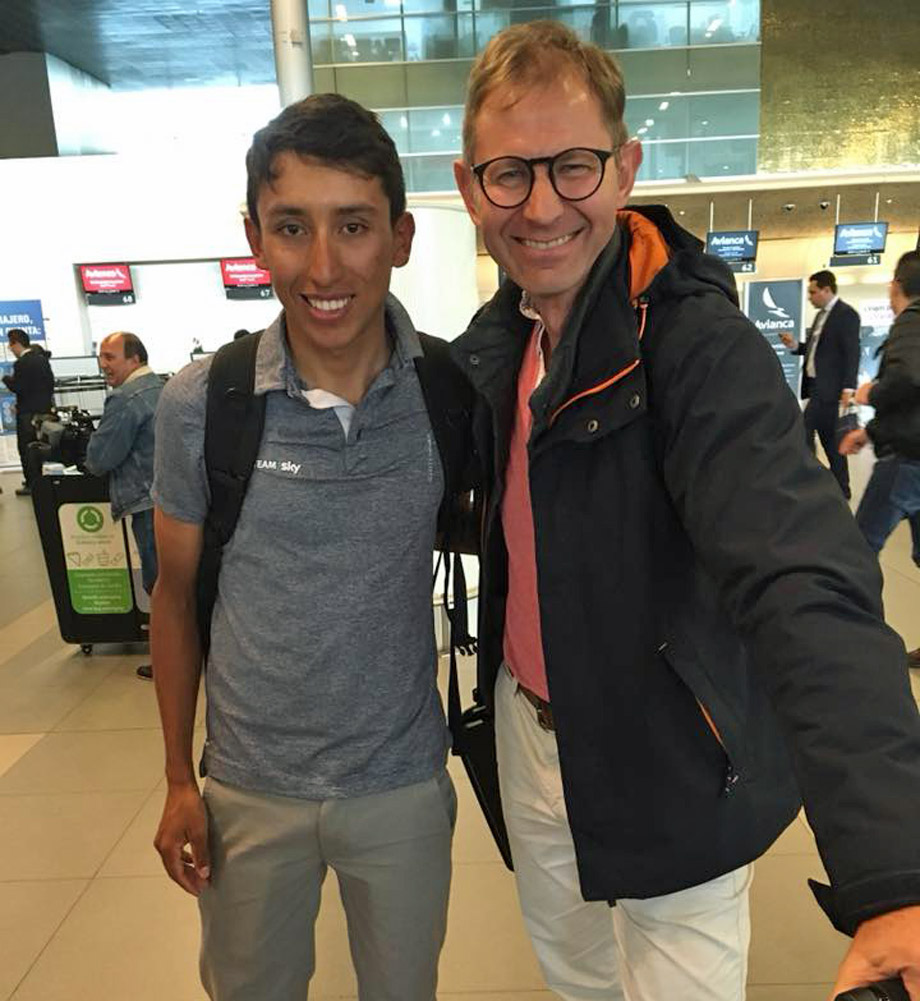 PEZ: Is ‘Bernal Mania’ anything like ‘Lucho Mania’ which sent Colombia into raptures when Herrera won the ’87 Vuelta?
The paradox is that he’s so successful, so young that he’s not well known like Herrera was or Quintana is. Herrera was King of the Mountains in the Vuelta a Colombia, won the Clasico RCN more than once, the Vuelta a Colombia and had been King of the Mountains in the Tour de France all before he won the Vuelta, so the public knew him and all about him. With Bernal, he hardly raced on the road in Colombia, just three road races, before he was ‘offered’ to Gianni Savio at Androni and went to Europe. He was third in the World Junior XC Mountain Bike Championships with virtually no support from the federation – their attitude was; ‘we’re not any good at mountain biking.’ Whilst Nairo Quintana is an established name in Colombia after his Vuelta and Giro wins, Egan Bernal isn’t. 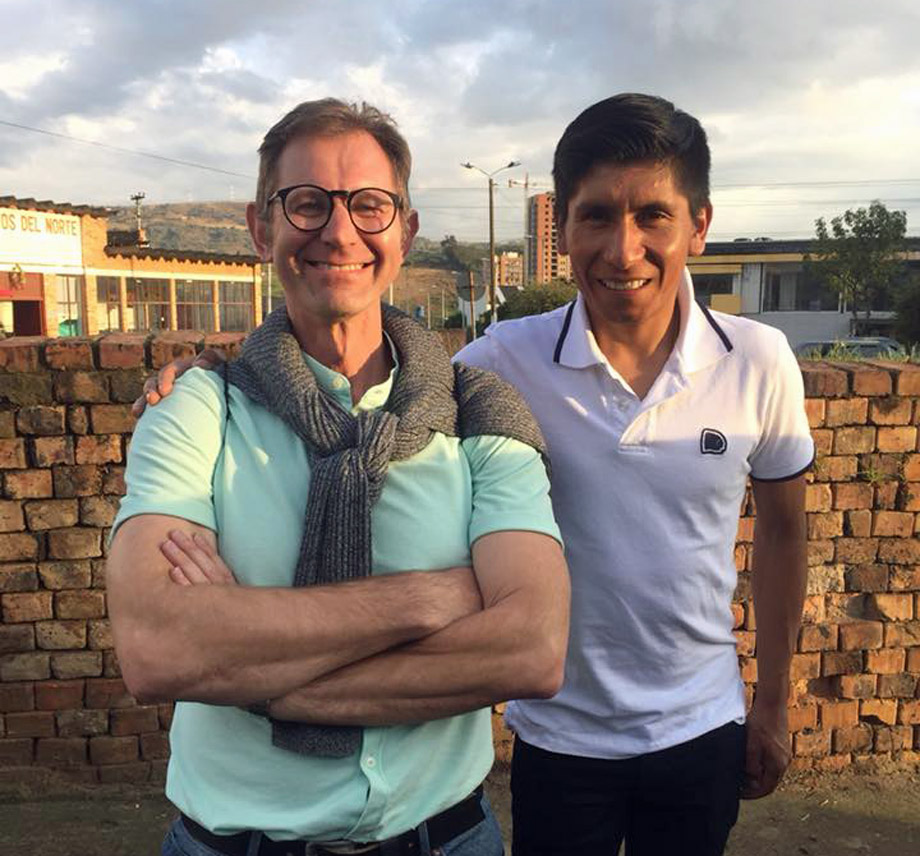 PEZ: On the subject of Quintana, he’s like a new man this year; five wins before Corona closed the curtain.
That’s because he’s happy, rejuvenated. When he burst on to the scene he had that scintillating acceleration; when that left him the team should have wondered ‘why?’ and had medical tests done, instead they just raced him all the more in search of UCi points. He’s won just about every major stage race – Giro, Vuelta, Tirreno, Valencia, Route Occitanie, Romandie, Burgos, San Luis, Basque Country, Murcia, l’Avenir; and yet despite the fact that he’s one of a tiny handful of riders on the planet who can actually win a Grand Tour, he wasn’t allowed to choose his own programme – just raced and raced. When his results slipped all the team could say was that; ‘he’s getting old.’ Leaving that team lifted 10 kilo of stress from his shoulders. 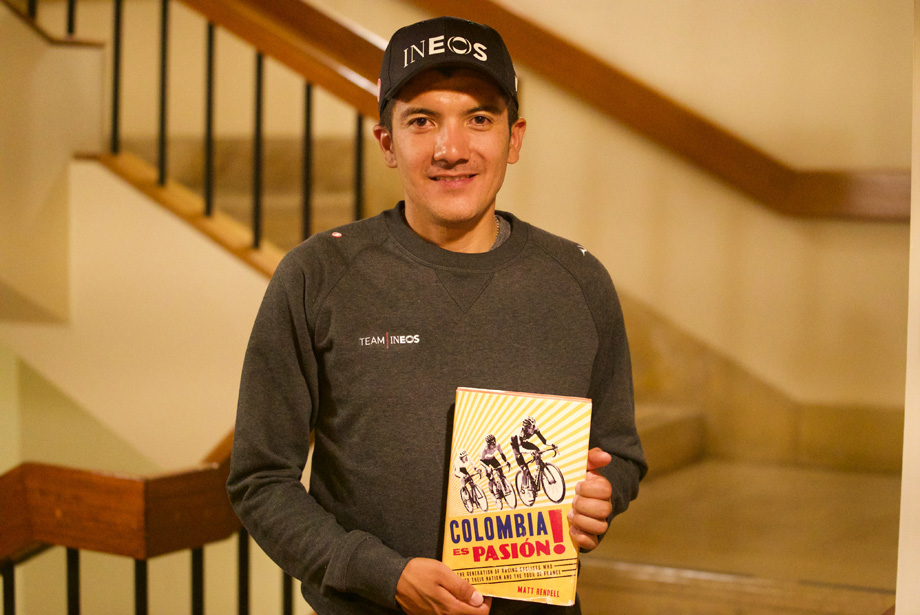 PEZ: Carapaz, you interviewed him recently for ‘Rouleur’ magazine, is there ‘Carapaz Mania’ in Ecuador?
In Tulcan canton the district of Ecuador he’s from, yes but that’s tucked up in the north of the country where Colombian radio has an influence and reports on cycling – that’s the only area where it’s a major sport. But there are individuals, some of them ex-pros who are dedicated to the sport and provide coaching despite all the handicaps. Richard is a remarkable man though, achieving the success he has in a nation where there’s little structure or money. At the Berlin Six Day there’s one day where they have kids racing – tots riding round on two-and-a-half grand machines. It’s not like that in Ecuador. 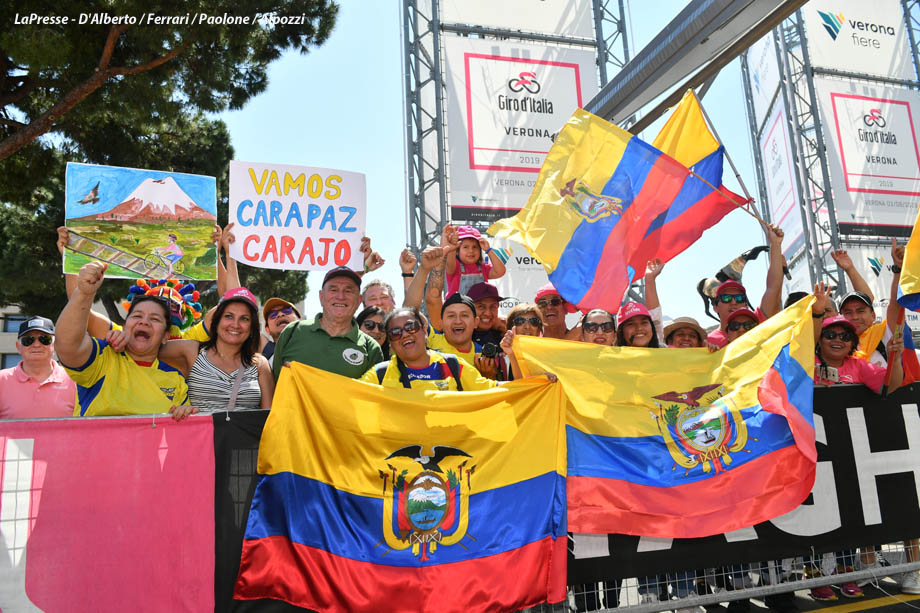 PEZ: ‘Colombia Es Pasión’ – the renaissance of Colombian Cycling?
If you write a book it has to be about a subject you know and it should ruin you to write it.
What interests me is, what does cycling mean to the people doing it and what does it mean to people watching it? I wanted to X-ray the national psyche. That’s what’s behind the book; fortunately we got it out before the ‘lock down,’ but I’m not sure how sales are – I’m afraid to ask! 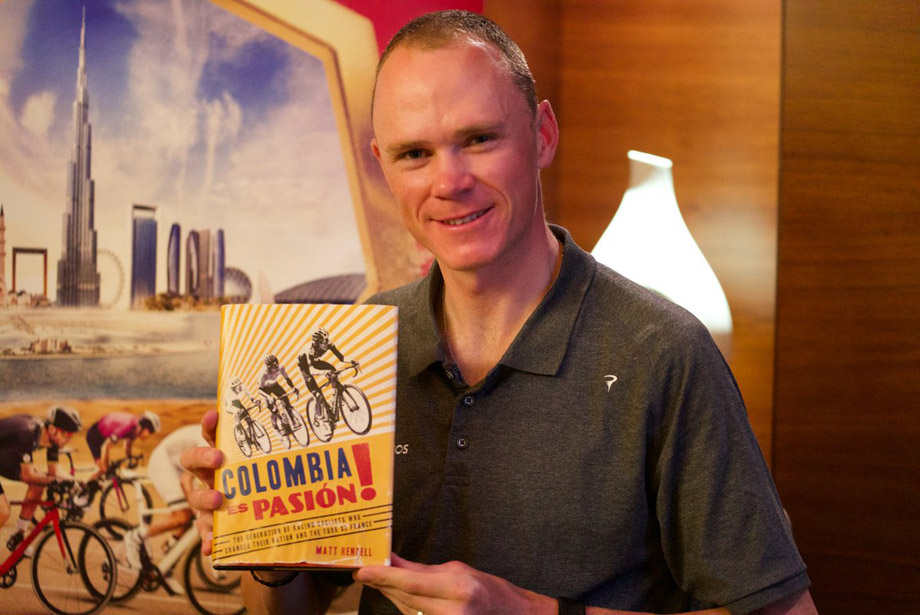 PEZ: The next book?
It’s one I’ve been researching for years about the biggest mass murder in British history, the Denmark Place Fire where 37 people died as a result of an arson attack. There were two unlicensed bars on the top two floors of 18 Denmark Place in London, ‘The Spanish Rooms,’ a late night bar frequented by locals, including Irish and Jamaican immigrants; and ‘El Dandy,’ a salsa club popular with South American immigrants. I came across the details whilst writing about salsa and think that there’s more to the story than has been told thus far… 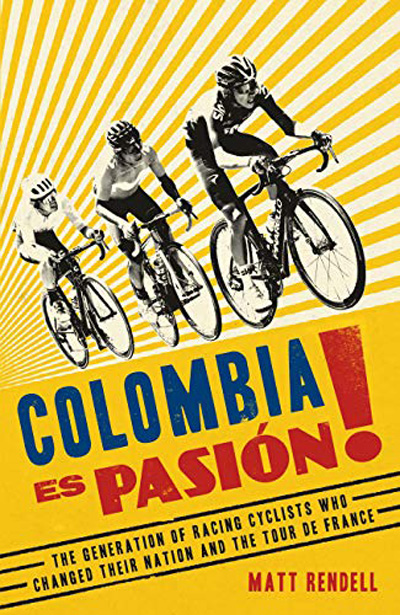 # Inspired by our chat, there’s a copy of ‘Colombia Es Pasión’ en route to Casa Ted right now, with thanks again to Matt for an entertaining interview. # 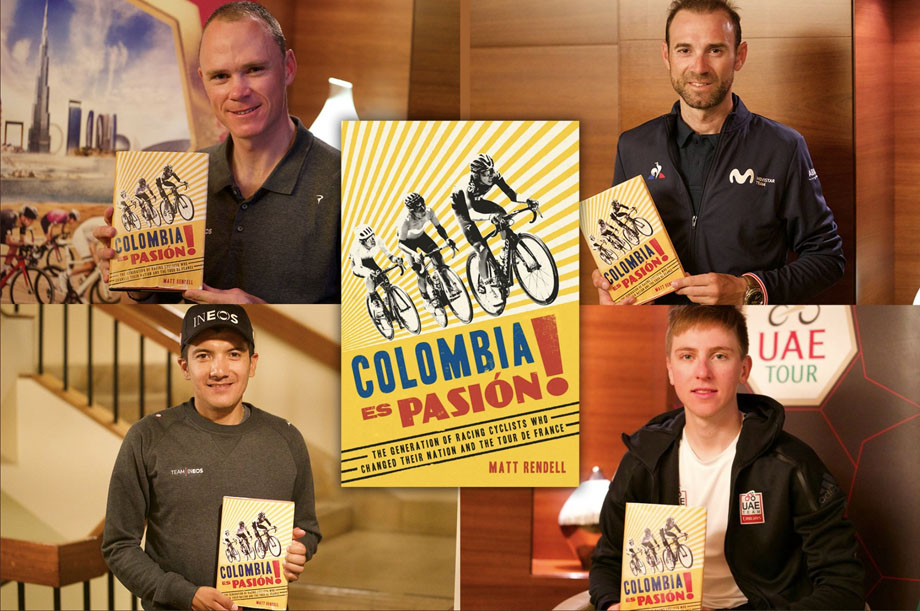