2020 saw the creation of a new website by a group of writers focused on cyclesports and the result, www.lacourseentete.com, provided a way of satisfying our need for good literature during the pandemic. Covid-19 continues its global march but the crew at La Course en Tete has not been idle and the result is their second excellent annual review of the pro racing season: “Racing in the Time of the Super-Teams.” 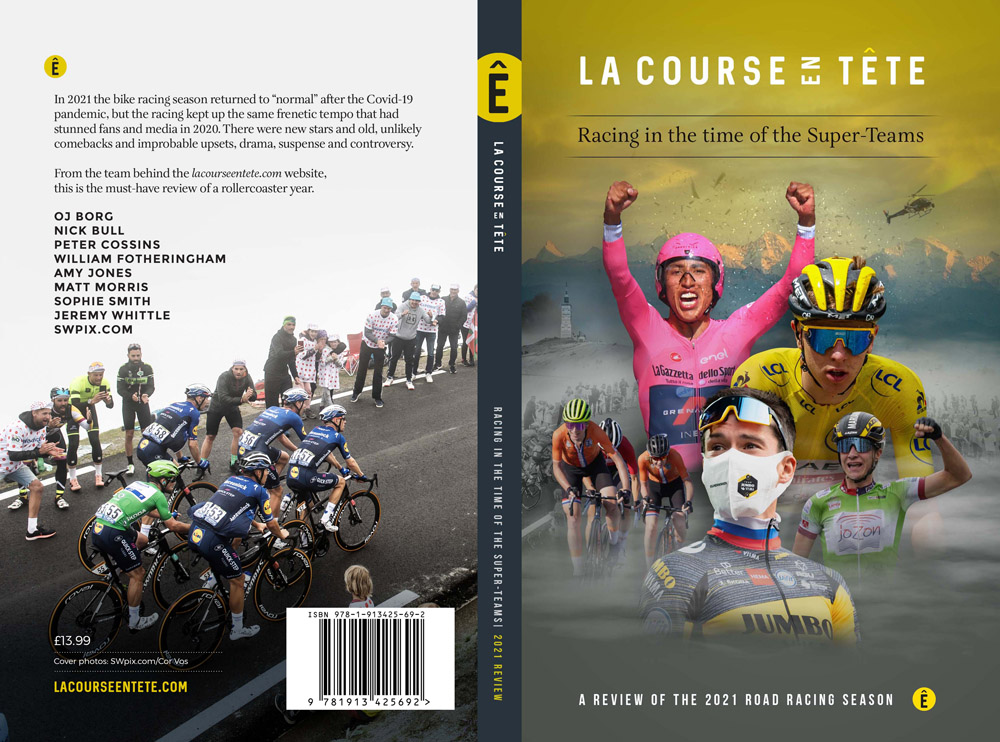 The contributors to this latest publication are well-known to readers of PezCyclingNews.com, and include William Fotheringham and Peter Cossins, whose books we have reviewed in the past. Add to them broadcasters and other writers (who are often featured in Peloton magazine’s entertaining podcast, Aerorgramme) including OJ Borg, Sophie Smith, Jeremy Whittle, Nick Bull and Amy Jones. There is a nice selection of colour photos from swpix.com. 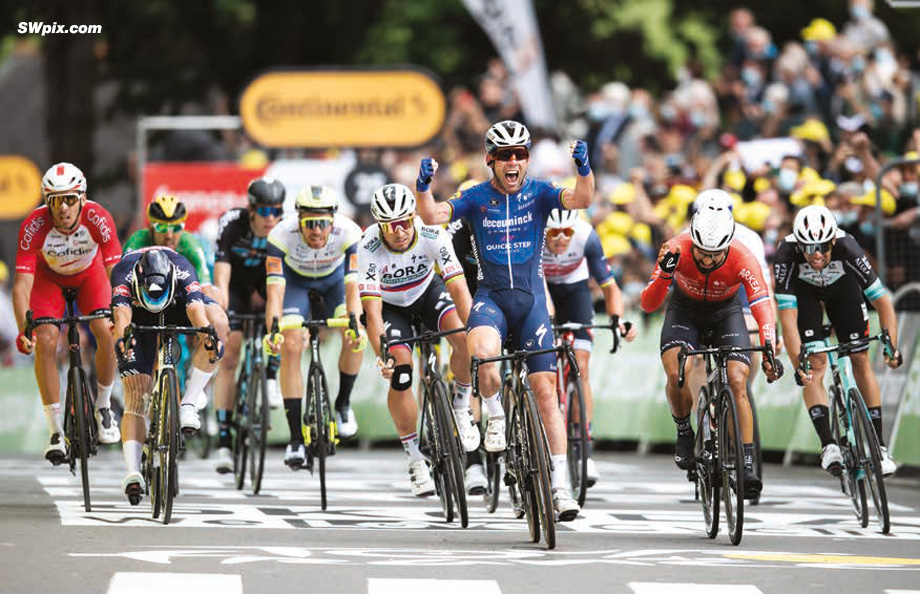 Unlike the big almanac we looked at last week, The Road Book 2021, “Racing in the Time of the Super-Teams” is not an exhaustive examination of the year’s competitions. Rather, as the Introduction notes, “It boils down to what interested each of our writers on a given day in a given way. This was an intense year’s racing, with more of the fresh energy we’d seen in 2021 following through after cycling’s shortest winter. This was the year of Mark Cavendish’s incredible comeback, Anna van der Breggen’s retirement after one of the finest careers on record, Wout van Aert’s emergence as the consummate all rounder, Anna Kiesenhofer’s triumph over the Orange machine, tears of joy from Mathieu van der Poel and Ellen van Dijk, and massive surprises from Elena Balsamo and Julian Alaphillipe.” 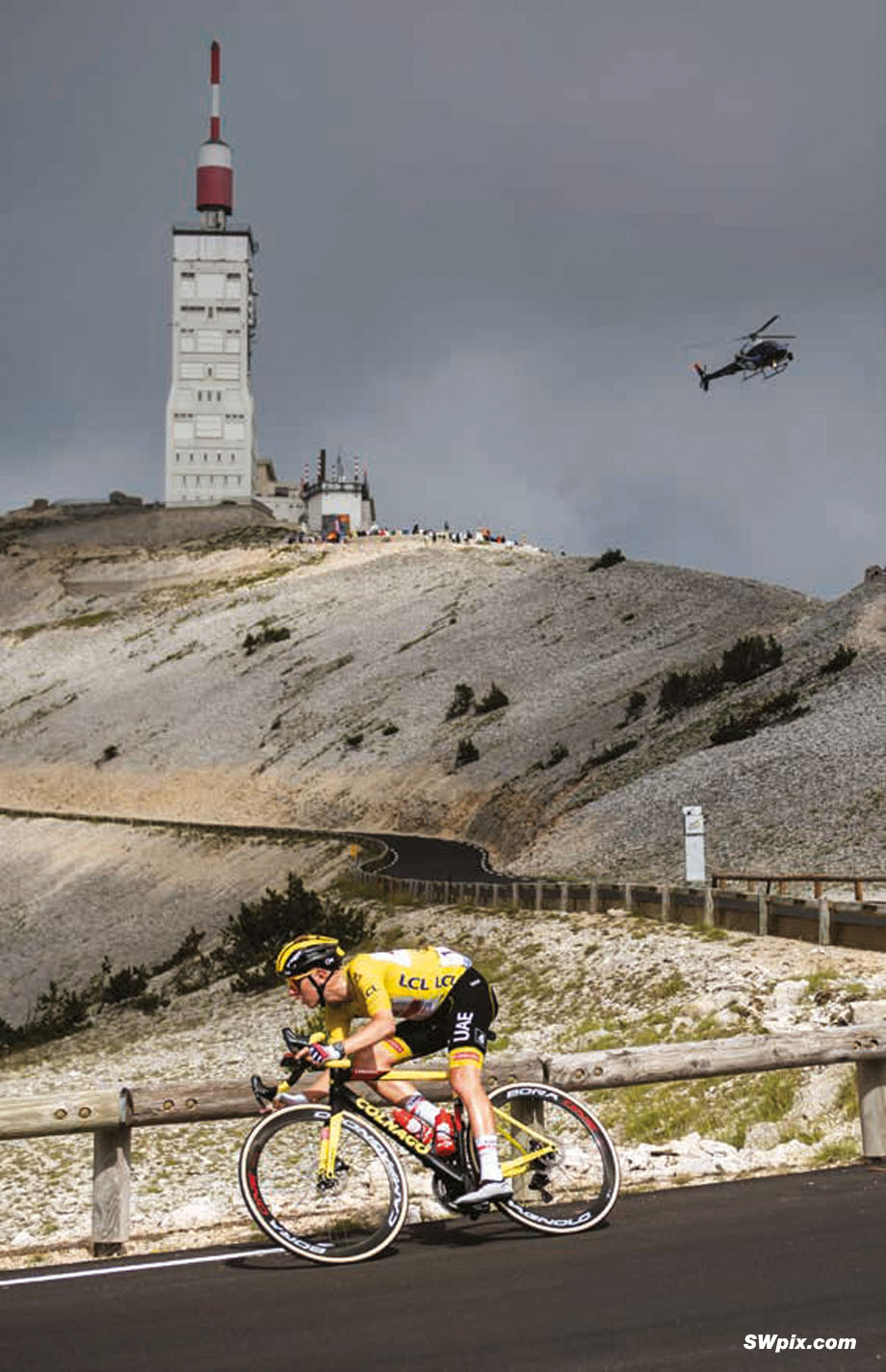 Each of the stories, most around two to three pages or so in length, included in the nine chapters of the book include the date they were written, which gives a sense of immediacy. William Fotheringham opens with a thoughtful piece that actually is a summary of the season, dated October 2021, and describes how we are now in an era where four Super-Teams dominate men’s professional racing. Between them, Ineos, UAE, Jumbo-Visma and Deceuninck-Quickstep have soaked up the majority of big wins, with the first three taking all the Grand Tours subsequent to Carapaz’s 2019 Giro win, while DQS’s 66 victories dominated otherwise. On the women’s side, it has been the Orange Train of the Dutch women that has left the table bare for others. This is a significant shift in racing and we have seen a continuation of 2020’s surprises, with long-range attacks during Grand Tours, and stage racers showing up for the Classics. 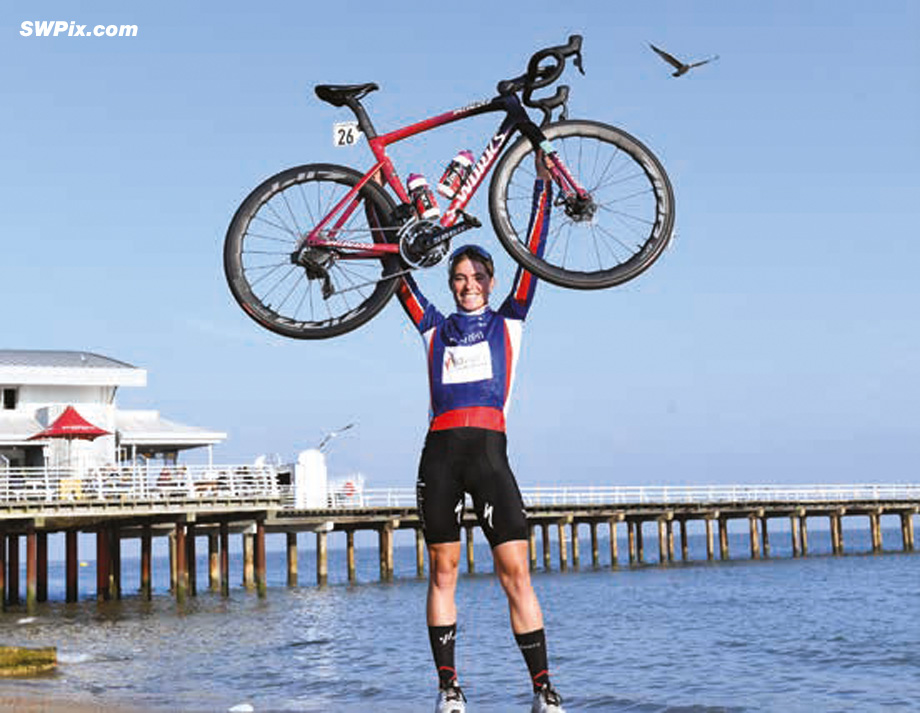 In many instances, the stories are intriguing because they have been overtaken by events. In December 2020 William Fotheringham notes the unexpected return of Mark Cavendish to Deceuninck-Quickstep, and writes: “…if any rider gets back into a positive spiral of form and success, surprising things can happen, and there is probably a better chance of that scenario happening for Cavendish at a well-structured team like DQS than in most places.” Fotheringham also wrote a nice piece in April 2021, mulling over “the Great Roubaix Debate,” or whether the race is better when wet and slippy or dry and dusty. Of course, nobody was to know that there would be no Paris-Roubaix on its usual April Sunday but the one that did appear in October, in a messy first women’s edition, and the day after in an even messier men’s race, provided spectacular racing. Peter Cossins’ coverage after the events called the weekend “legendary” with good reason. 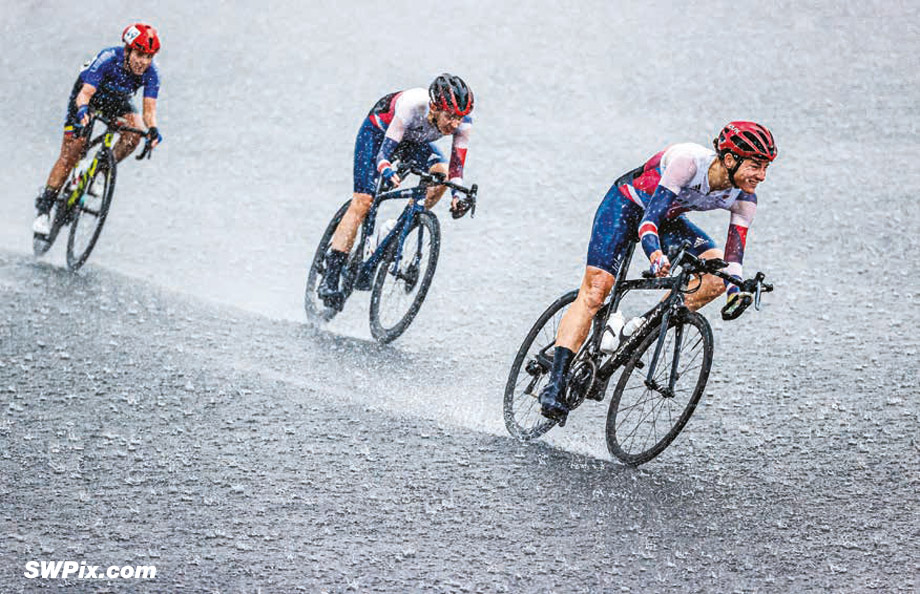 But there was so much of 2021 that stands out and it comes flooding back as one leafs through the pages. The return of Cavendish and the rise of Pogačar. Ineos and Movistar’s not-so-effective attempts to confuse the opposition at Grand Tours with “tridents,” three leaders on the attack. A BikeExchange team car driving into DQS’ Peter Serry. Remco Evenepoel yanking out his earpiece during the Giro d’Italia. A consideration of what is a “Monument” and whether Strade Bianche, which never fails to delight, should be considered one. Improper water bottle disposal fines maybe being something smaller than the UCI needs to be considering in racing. 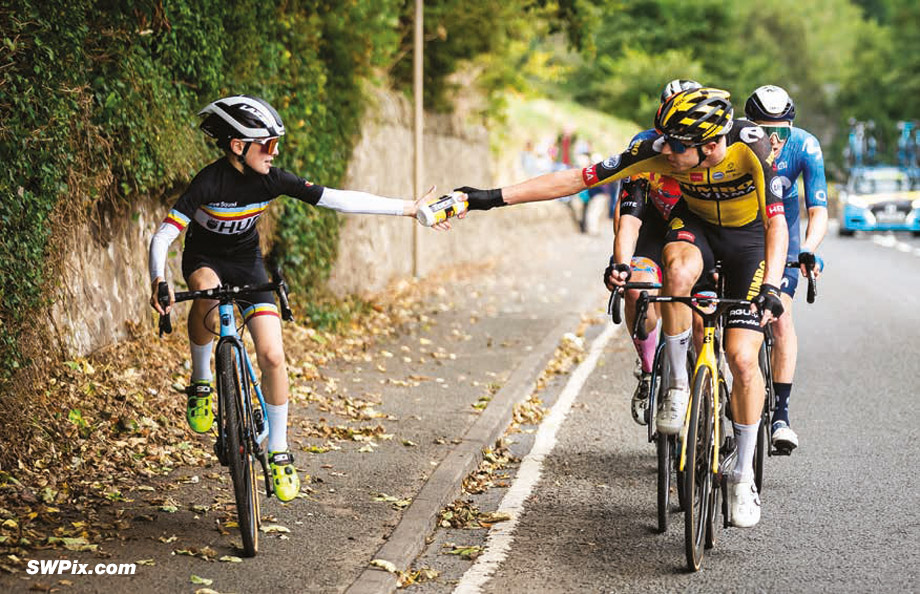 September 11, Edinburgh: Pascal Eenkorn hands a bottle to 12-year-old Xander Graham as the winning break approaches the finish of stage seven of the Tour of Britain. Yves Lampaert went on to win the stage

Women’s racing tends to be given short shrift but not here. Amy Jones writes a very good story about the Trofeo Alfredo Binda and maybe that women’s racing should be on a different schedule than men’s events in order to solidify its reputation rather than being seen as a kind of sport appetizer before the main event. One of the issues that came up after Omloop Het Nieuwsblad was the disparity in prize money between the men’s and women’s races, with Davide Ballerini getting 16,000 Euros while World Champion Anna van der Breggen received, uh, 930 Euros. There is clearly more work to be done in this direction and at least there will be a minimum wage put into place for female racers by direction of the UCI. 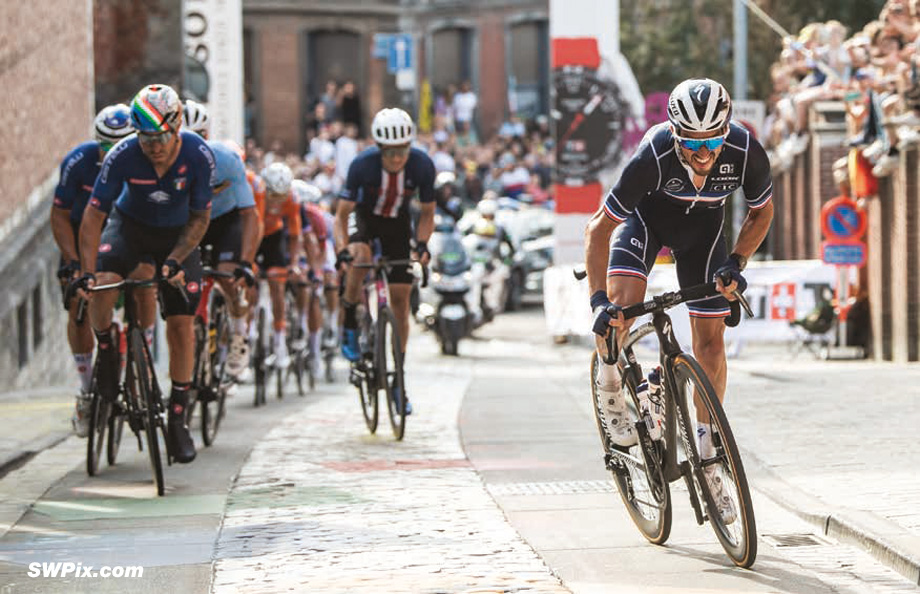 September 26, Leuven: Julian Alaphilippe makes his winning attack on Sint Antoniusberg with 17 kilometres remaining to the finish of the men’s world road race championship; behind, Sonny Colbrelli and Neilson Powless are unable to respond

There is also some looking back at racing’s entertaining past. A standout is Marco Pastonesi’s piece on the maglia nera, the “Black Jersey” once given to the last-placed rider of the Giro d’Italia, and its greatest exponent, Luigi Malabrocca, who “devised a new way of racing. He would escape behind the peloton, go into bars and never emerge again, he would hide in ravines, in hay barns and cellars. Once he hid in a well, a dry one, but a peasant lifted the cover off and “what are you up to?” “I’m riding the Giro.” Then he got back on his bike, went over the Passo Rolle, the Pordoi, Campolongo and Gardena—this was the mega stage through the Dolomites—and arrived at the finish last. Very much last. He was the blackest of black jerseys. It was the thing he did.” 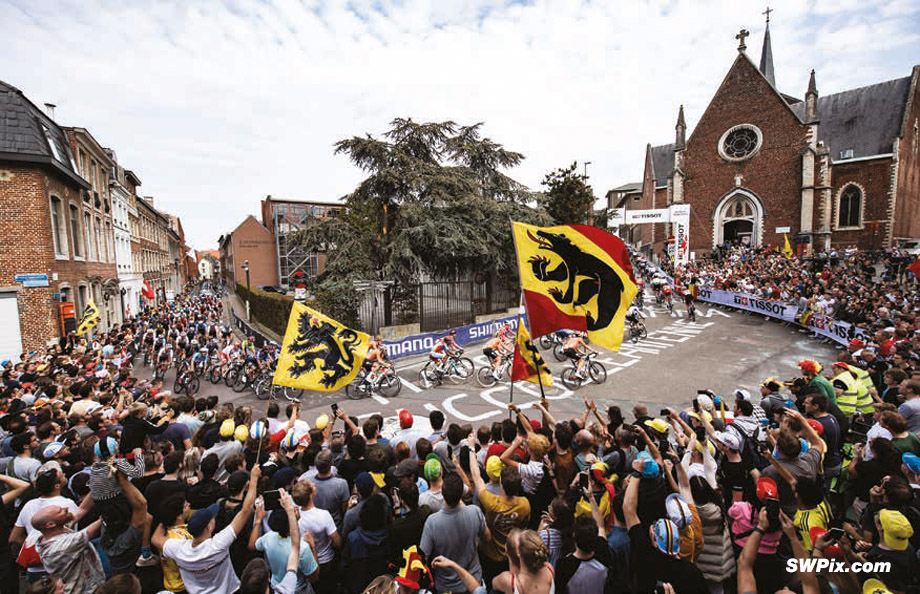 September, Flanders: as well as Leuven, Antwerp, Knokke Heist and Bruges were among the venues at the world road race championships, the first time Belgium had hosted the event since Zolder in 2002

“Racing in the Time of the Super Teams” covers a lot of subjects in its 235 pages, often delving into the less familiar areas of the sport. But throughout it offers a consistently high standard of writing and will provide great pleasure as we in the Northern Hemisphere sit through the dark months of winter and wait for a new season to begin, warmed by memories of the great season past. As Peter Cossins writes in “A Golden Age of Bike Racing:” “Over the past 30 years, racing has never been as consistently good as it is now. What’s more, looking at the young talents already burning a trail through the sport…this upward trend looks set to continue. This is an era to relish.” 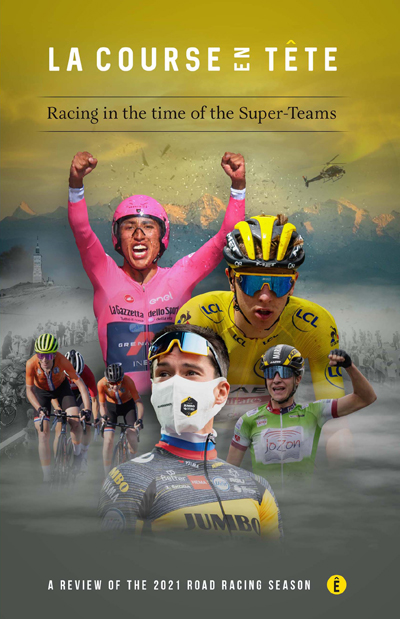 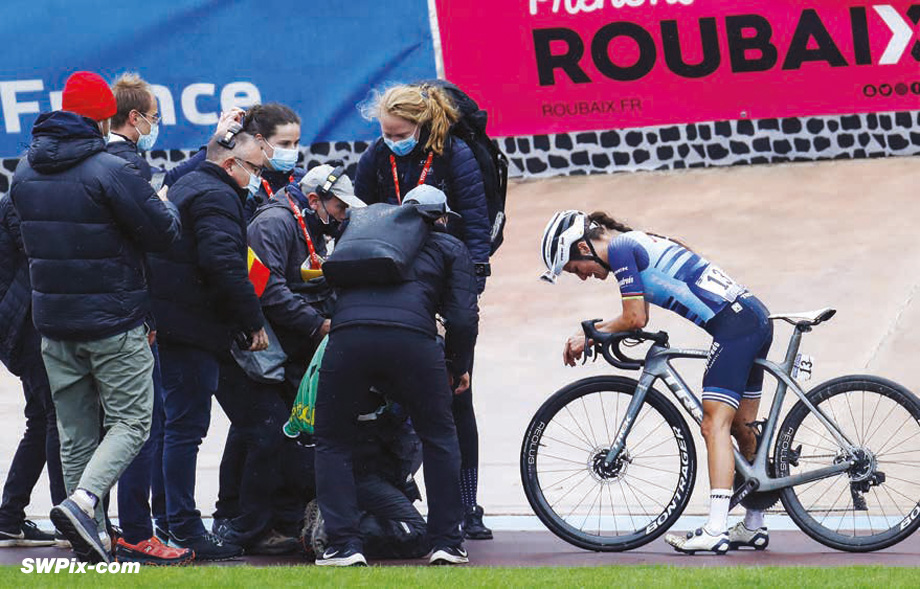 October 2, Roubaix: Lizzie Deignan catches her breath after making history as the first winner of Paris-Roubaix Femmes. She finished 1min 17sec ahead of Marianne Vos