Bookshelf: In her introduction to the Second Edition of Michael Blann’s book of mountain photographs, Susannah Osborne writes: “It is impossible to talk about cycling without talking about mountains. For cyclists and fans of cycling, mountains are fundamental to understanding the nuances of the sport. Mont Ventoux, the Passo dello Stelvio, the Alpe d’Huez—these famous peaks have become temples where riders go to create a sense of self, where men and women validate their worth, and where the sport’s heroes are born, and crushed.” Pretty heady stuff, indeed, but turning the pages of this spectacular book and looking at its gorgeous photos you can believe it. 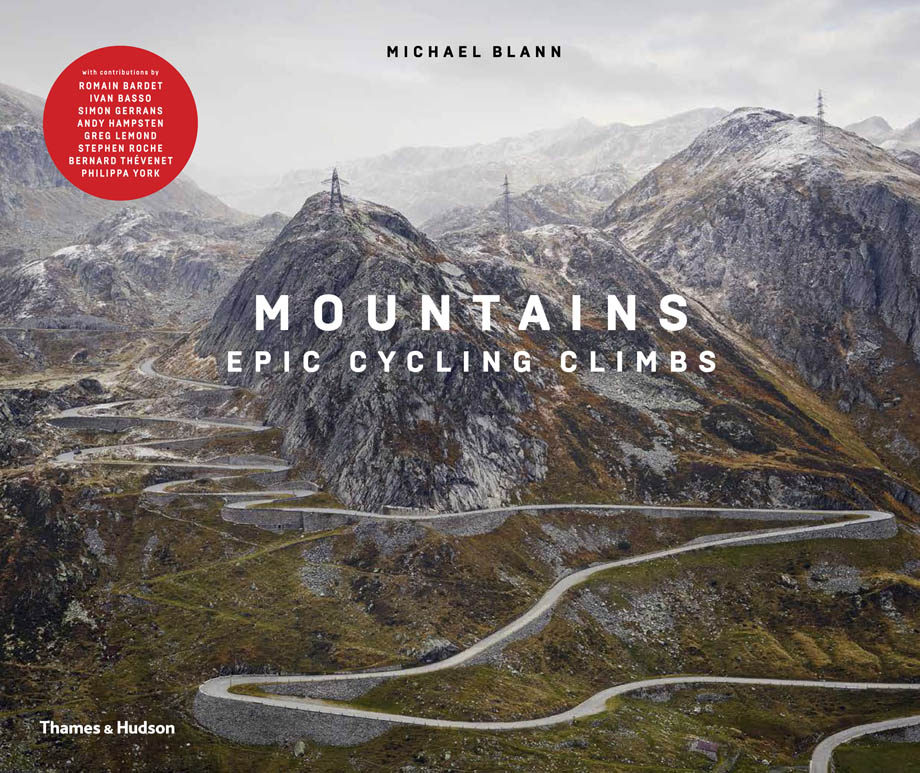 British photographer Michael Blann was an elite cyclist before turning to art school and becoming adept at printmaking and photography. Combining his passion for photography and for cycling, he invested three years in taking the pictures that capture the powerful relationship between cycling and the physical landscape. Those expecting close-ups of famous pros grinding away in competition will not find them. Rather, the photos show environments that dwarf the racers (when they are present at all) and underscore the daring of those that would turn their lightweight bicycles against the unyielding rock. 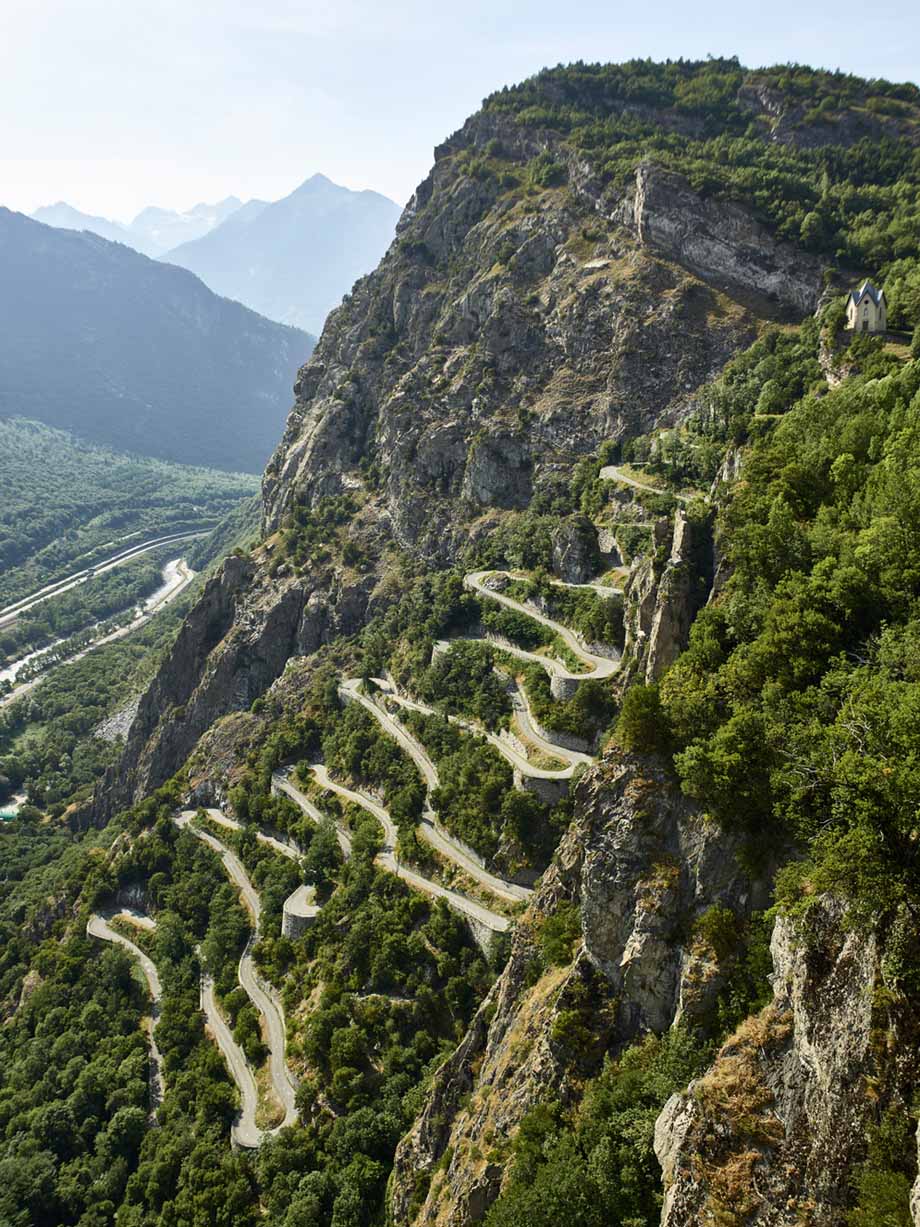 Mr. Blann is clear in his purpose: “I set about photographing the races in their wider context. I wanted to document the permanence of the landforms, their relative scale, and their sheer presence. I wanted to capture the unique character of every mountain—the roads and man-made structures that punctuated the landscape, its vegetation, and the impact of the seasons.” 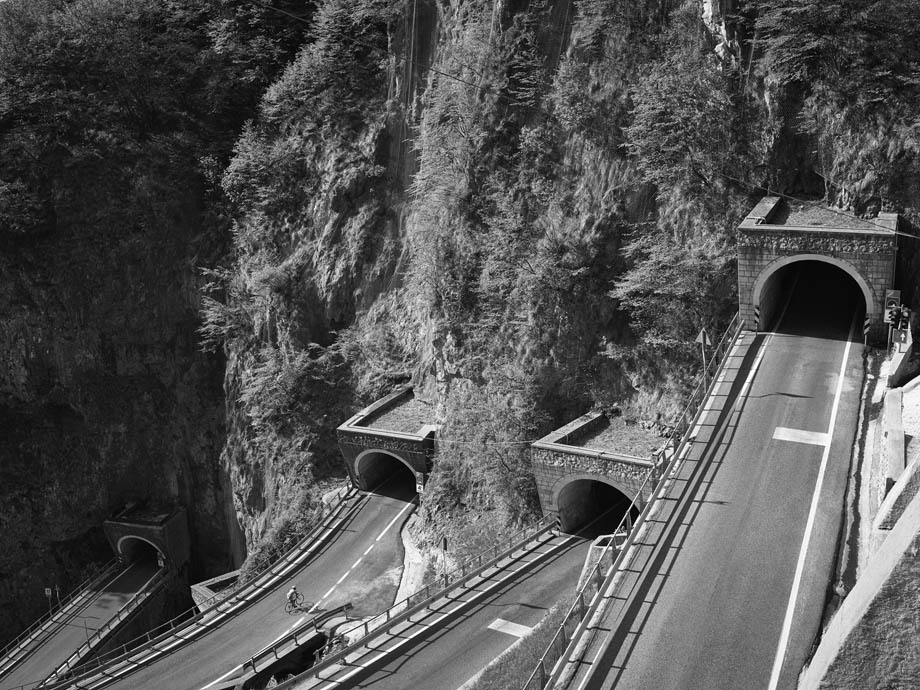 There are six chapters in the book, covering the famous climbs of the Tour de France, the Giro d’Italia, and the the Vuelta, along with some notable climbs, such as the Col de la Madone, famous as training grounds of the pros. In this expanded edition of the book (first published in 2016), the photographer has also included some truly spectacular climbs in Austria and Switzerland that deserve closer attention from enthusiasts. For those who have struggled up the Grossglockner it is something never to be forgotten and for those in the know the Őtztal Cycling Marathon, with its 5,500 meters of climbing and grand finale of the Timmelsjoch, must be considered among the toughest and most rewarding of annual events aimed at non-professionals. 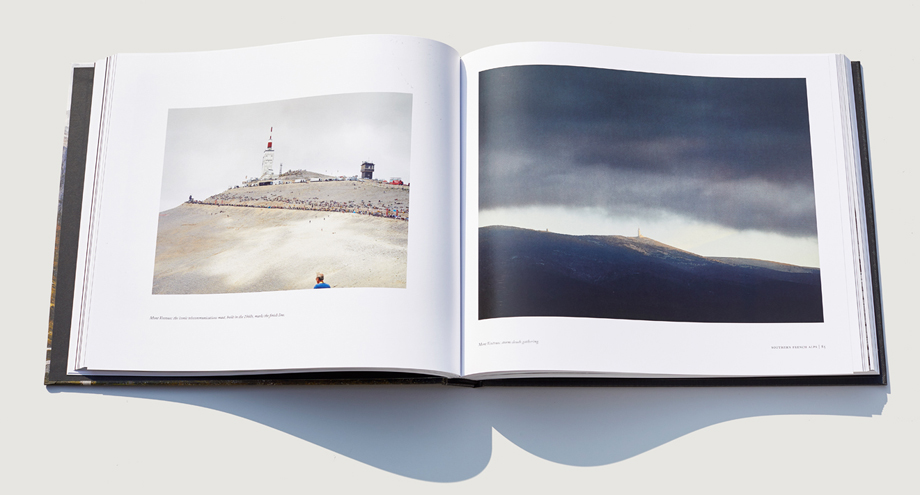 While there are scenes with forests present, most of the photographs are above the tree level. How interesting and diverse can bare rock be, or dense green ground cover? In fact, every mountain is different—its approaches, its curves, its summit views. Mr. Blann.with his artist’s eye, has captured enormous drama in what are basically still life portraits of nature, with greys and greens impressively and powerfully captured. 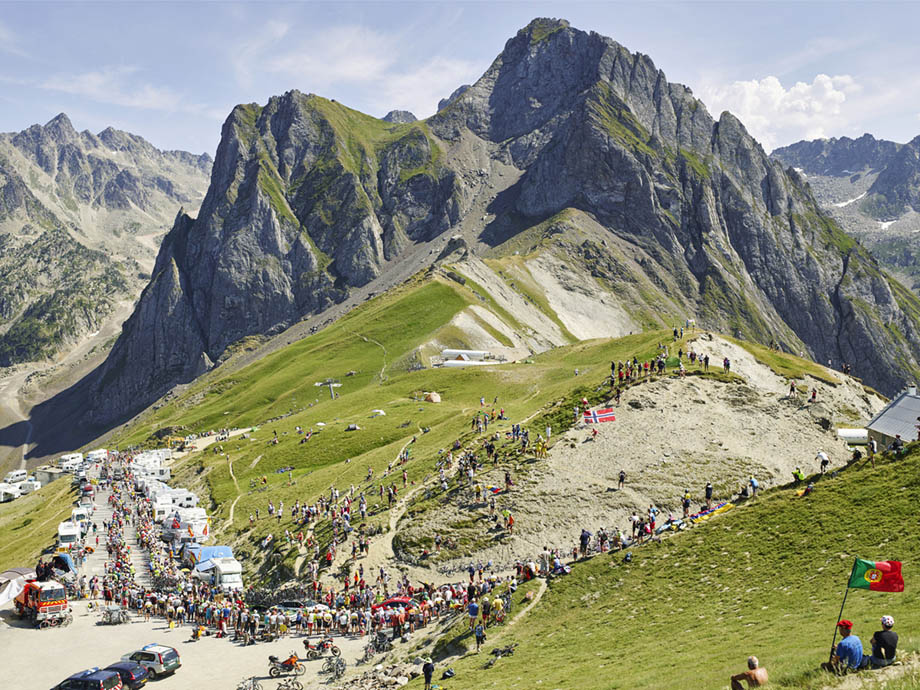 There are a lot of superb photos in this beautifully-presented book so choosing a favourite is difficult. Favourites are there, of course—Mont Ventoux, the Galibier, the Col de Peyresourde—and it is to the photographer’s credit that even these familiar places look so fresh. The full effect of light is drawn upon, as the photos of Ventoux show: the barren rock and the heat of day, the dark clouds of a storm approaching. Some mountain passes are of considerable length, such as the Col d’Aubisque, and receive enough attention for their varying characters that you think you may be looking at multiple passes instead of a single grand one. 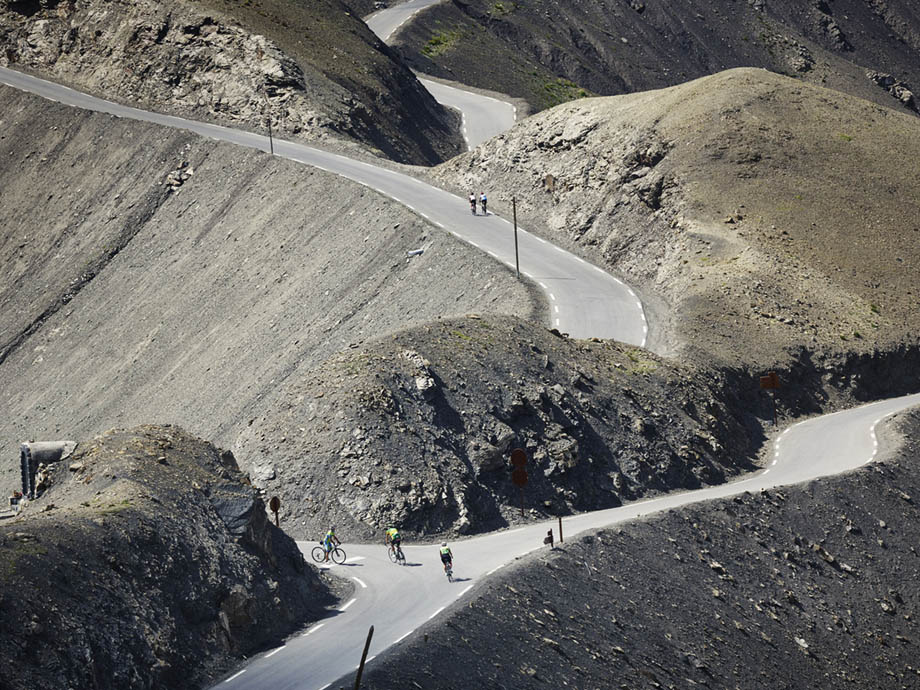 In addition to the breathtaking photos, the book includes a number of short essays written for it by current and former professional racers, including several Grand Tour winners and Classics champions, with contributions ranging from clear and workmanlike to surprisingly poetic as they write about what the mountains have meant to them, whether they were good climbers or not. There is a strange and fascinating account (published previously in Rouleur magazine) by Pedro Horillo about his terrifying crash at the 2009 Giro; the late and much-missed Paul Sherwen writing about his agonizing efforts to get over a mountain before a time cut; an absolutely hilarious short piece by Allan Peiper—clearly not afraid of telling jokes on himself—at the end of the book. We also learn that if you lose control where there is no guardrail, going over may not be too bad whereas if there is a guardrail you want to lay the bike down and maybe break a few bones compared to what is on the other side.

As entertaining and interesting as the essays are, they are merely an appetizer to give some idea of what happens on the magnificent mountains in the magnificent photos. The photographer has endeavoured to show us the mountains as we don’t usually see them—from high above or far away, in summer or in snow. Some are crowded with spectators, others are empty and at peace. For those of us who have ridden these climbs at less-than-pro-speeds and been able to reflect them, “Mountains-Epic Cycling Climbs” will invoke a longing to return. For those who have only dreamt of these challenges, this very fine book is an inspiration to set off and upwards. 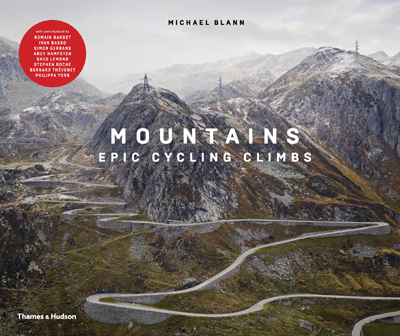 # Mountains-Epic Cycling Climbs by Michael Blann is available from AMAZON.COM. # 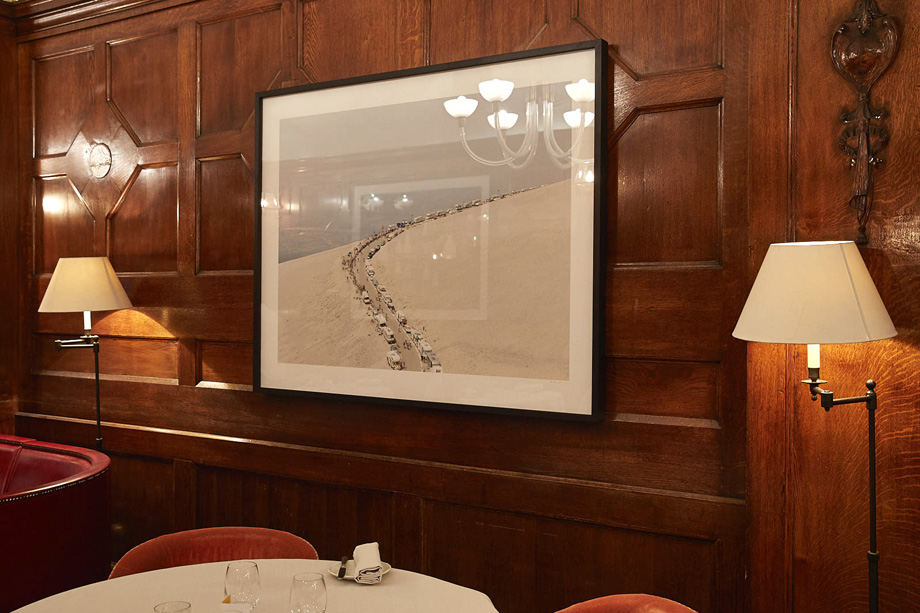 The primary focus of Mr. Blann’s work which resulted in this book has been in making limited edition fine art prints of the photographs. In the large formats offered they must be even more spectacular so readers are encouraged to go to https://www.michaelblann.com/shop/ for more details.

• Buy the book at Amazon.com 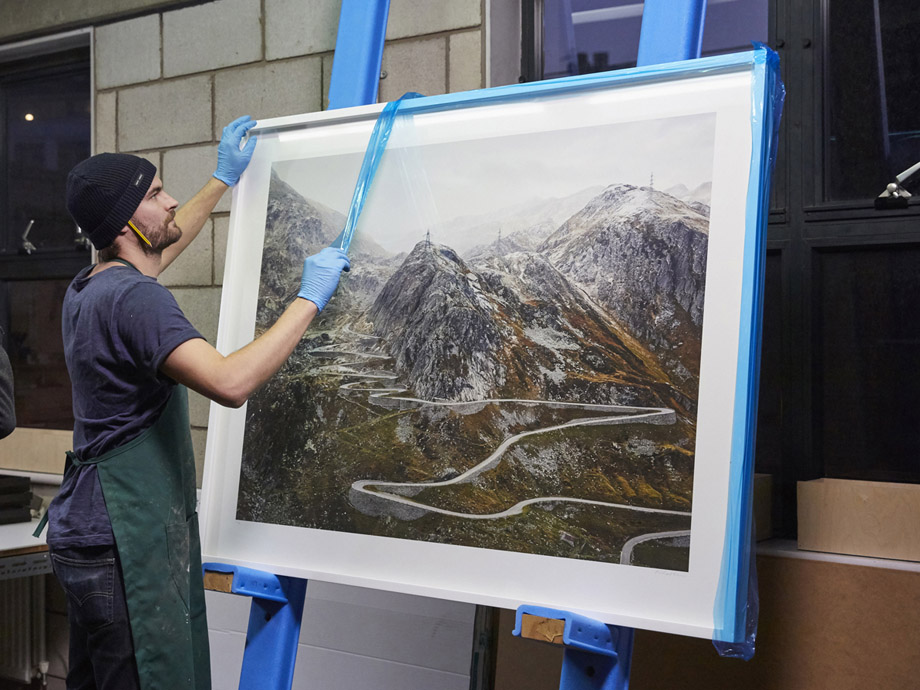