Book review: One of the nice things about this gig is that people sometimes send you cool cycling books to review, in this case, ‘No Ordinary Joe’ sub-titled ‘Cycling Legends 1960’s, 1970’s, 1980’s, a unique collection of stories, USA & Canada.’ 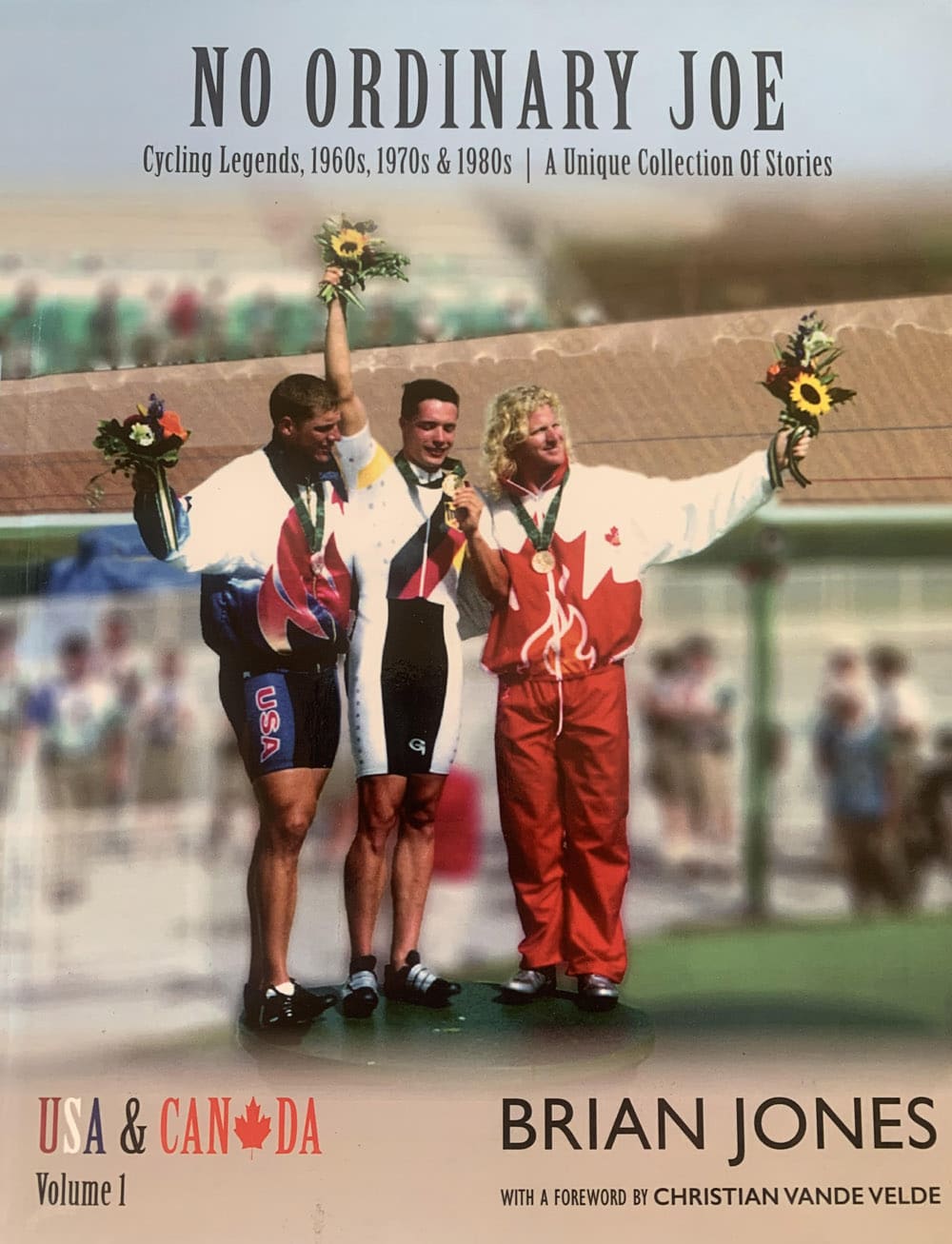 There’s a wee problem with the ‘No Ordinary Joe’ part of that title in that Joe Calzaghe, Joe Biden, Joe Paterno and others all have books written about them with the same title. No matter. 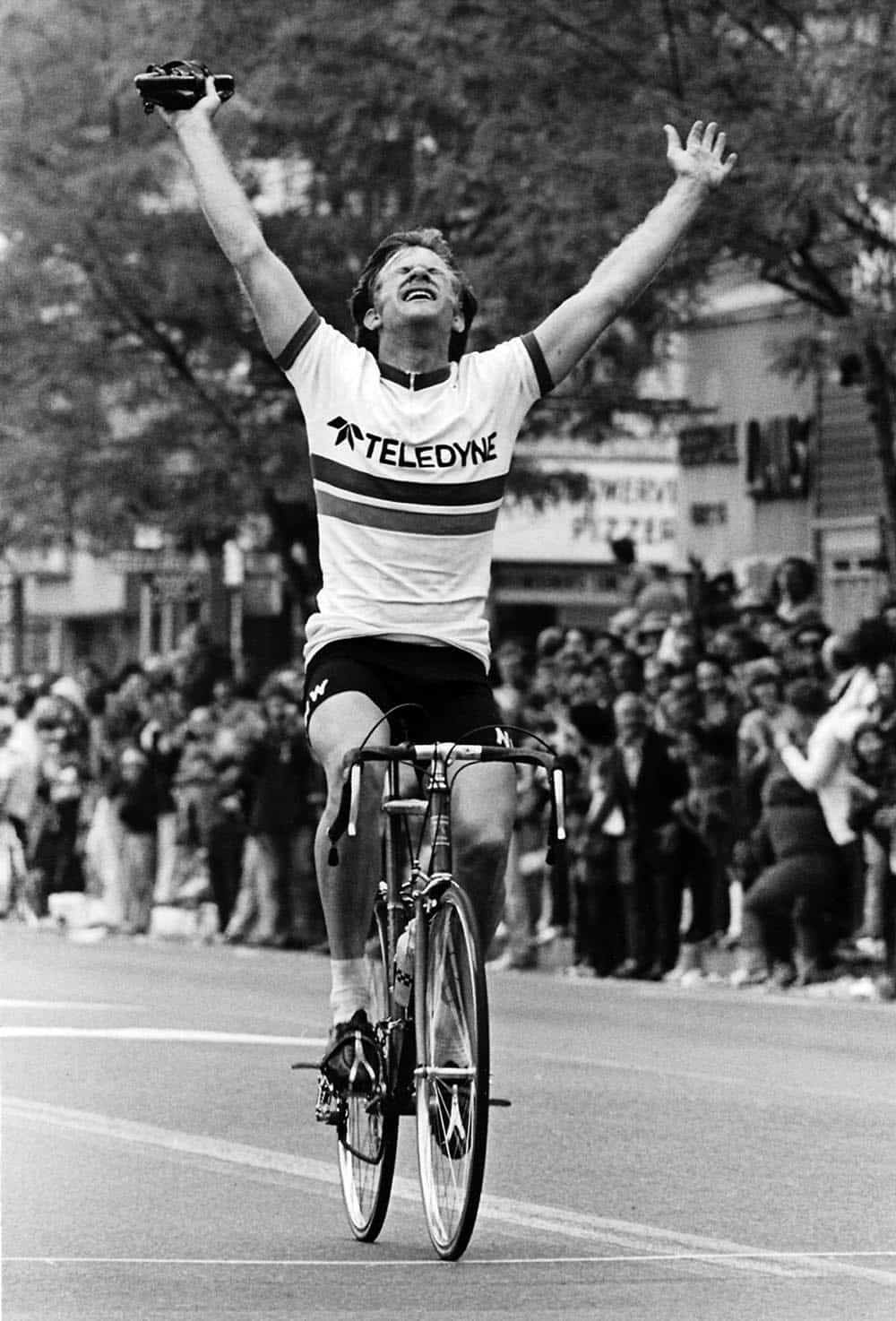 Ron Skarin winning the Tour of Somerville on a Teledyne Titan – Photo by Robert F. George

The book comes on the back of an English edition of the first book with this title written by Brian Jones, with his cover jacket intro telling us; “NO ORDINARY JOE is an homage to the amateur cyclist, the riders who receive far less column inches than their professional counterparts but who nevertheless have fascinating stories to tell. Indeed, the deeds of these indomitable cyclists should be recorded and lauded before they are lost in the mists of time. Let’s celebrate these wonderful riders by recounting their lives and times on the best mode of transport ever invented – the bicycle.” 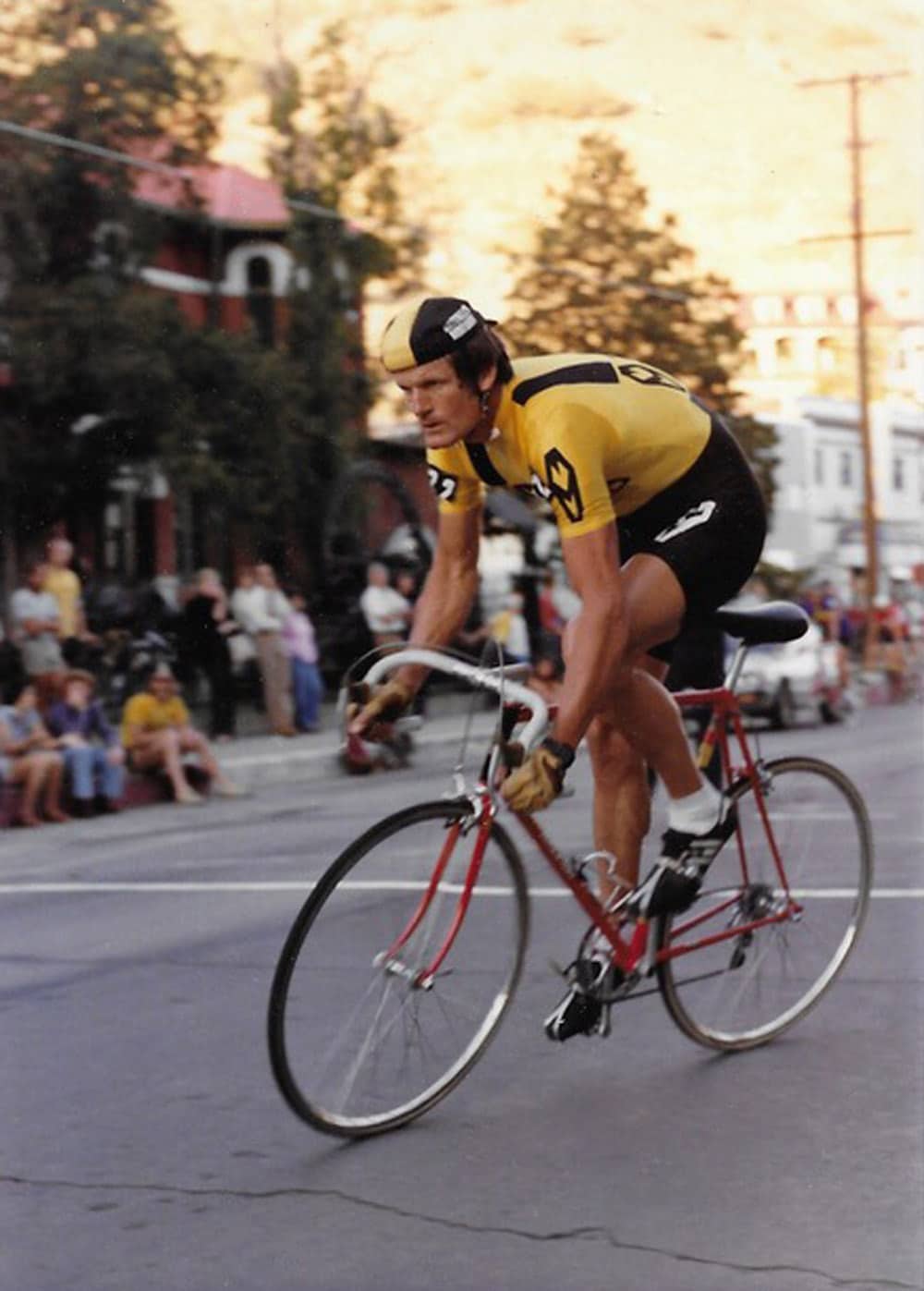 Whilst many of the riders interviewed in the book were unknown to me, if you call yourself an aficionado then champions the like of Don Awcock, Janet Birkmyre, Geoff Cooke and Dave Le Grys – the last three of whom I’ve had the pleasure to interview – are hardly ‘unknown.’ The USA version is an altogether different proposition to the GB edition with a bigger, glossier production. The content whilst covering names unknown to me like Pat Barker, Eon D’Ornellas and Phil Guarnaccia, all fascinating characters if not household names, it also includes well known legends of the sport, the like of Curt Harnett, Barry Harvey, John Howard, the late Jocelyn Lovell, the late Audrey McElmury, Gordon Singleton and Alex Stieda who are all legends of the sport. And at least Howard, Singleton and Stieda all pulled on professional team jerseys during their careers, so it’s not all about amateurs. That said, it doesn’t make their stories any less worth telling, especially now that there are less and less hard copy cycling publications which pick up on ‘retro’ and these riders deserve to be remembered and have their legacies ‘fleshed out.’ 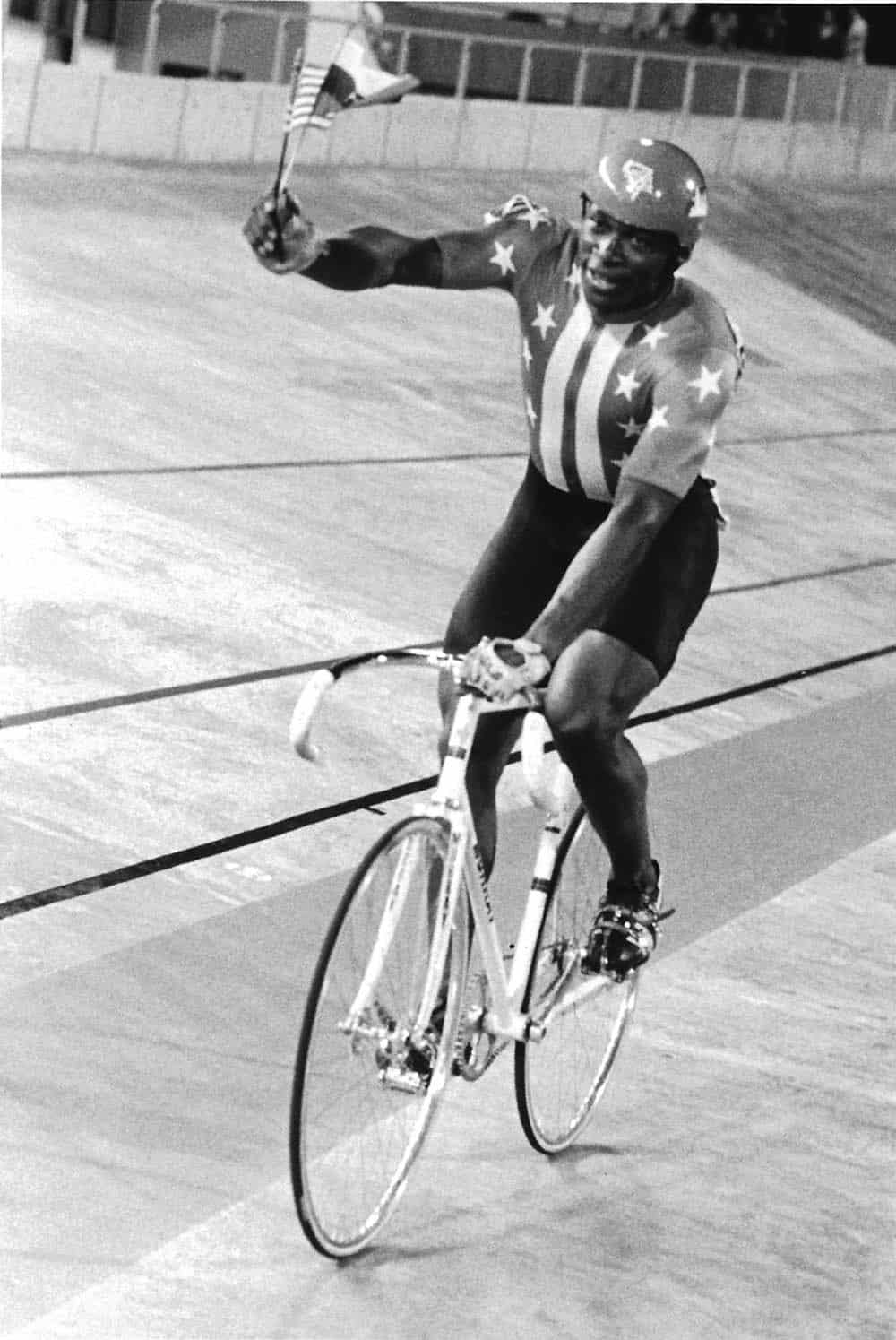 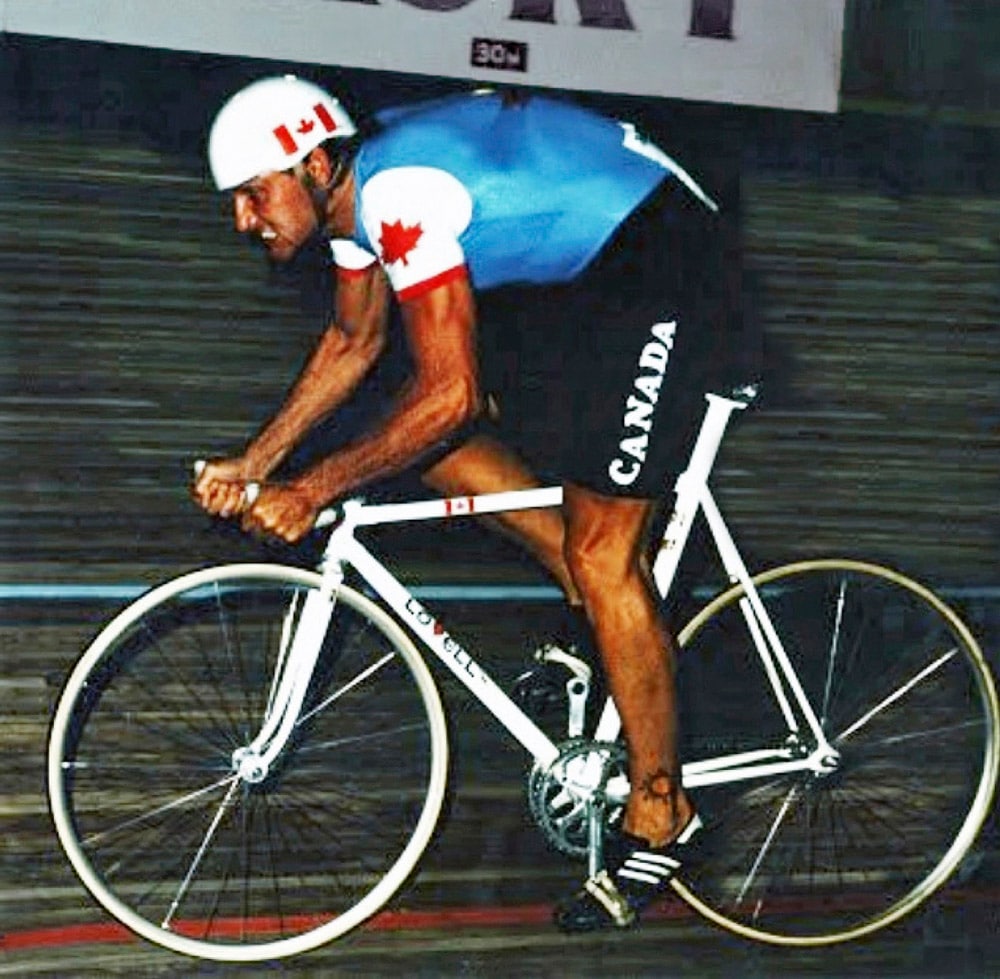 Several of my personal heroes are included in the book, not least the late, great Jocelyn Lovell of Canada who was one of the classiest riders I ever had to the pleasure to witness in action. The author describes him exactly as I remember; ‘Astride a track bike; adorned in the beautiful Canadian national pale blue jersey with white sleeves and red maple leaf in back; immaculate, slim and long limbed; he looked as if he’s been born to perform the role, and none could argue that viewpoint.’ I always wanted to interview the man but the fates decided that was not to be, ‘rest in peace, Sir.’ 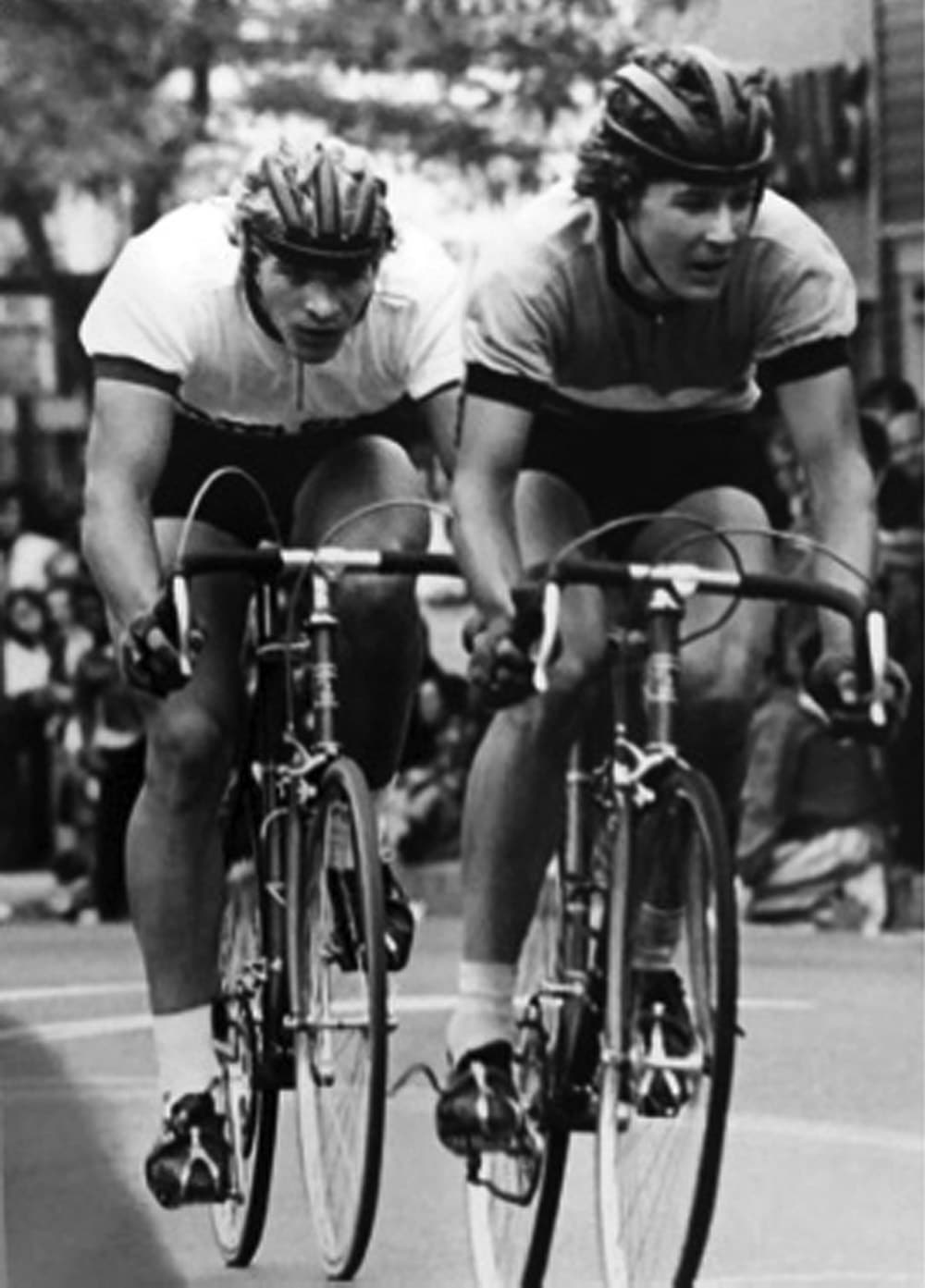 Lovell’s mentor, Barry Harvey gets a chapter to himself, born in Britain, then a multiple Canadian champion on the track he won Commonwealth silver on the tandem with protégé Lovell in Edinburgh in 1970. He was also one of the very first to see the benefits of titanium as a potential material for bike tubes; his ‘Teledyne Titan’ is now a sought after collector’s item. 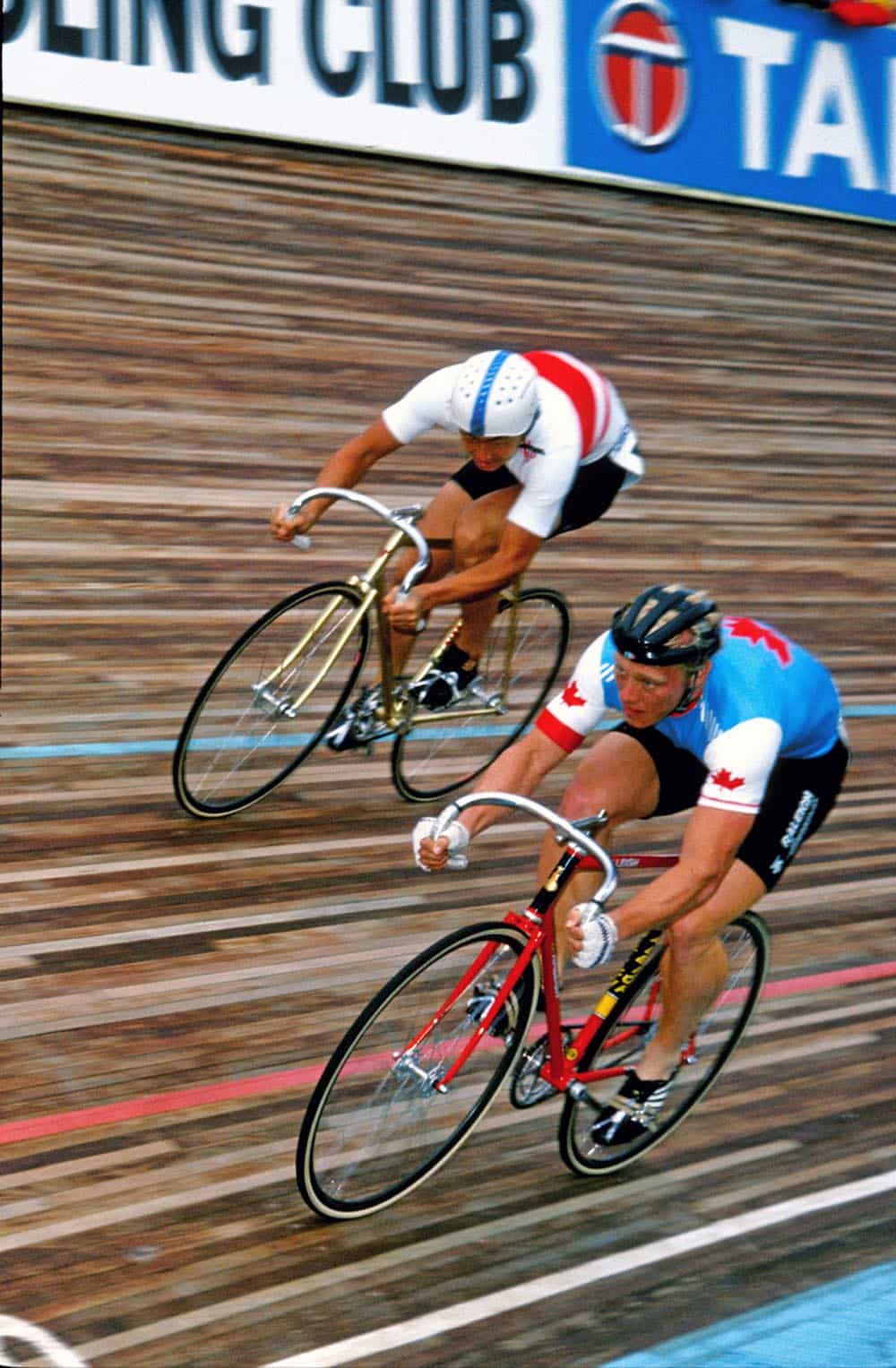 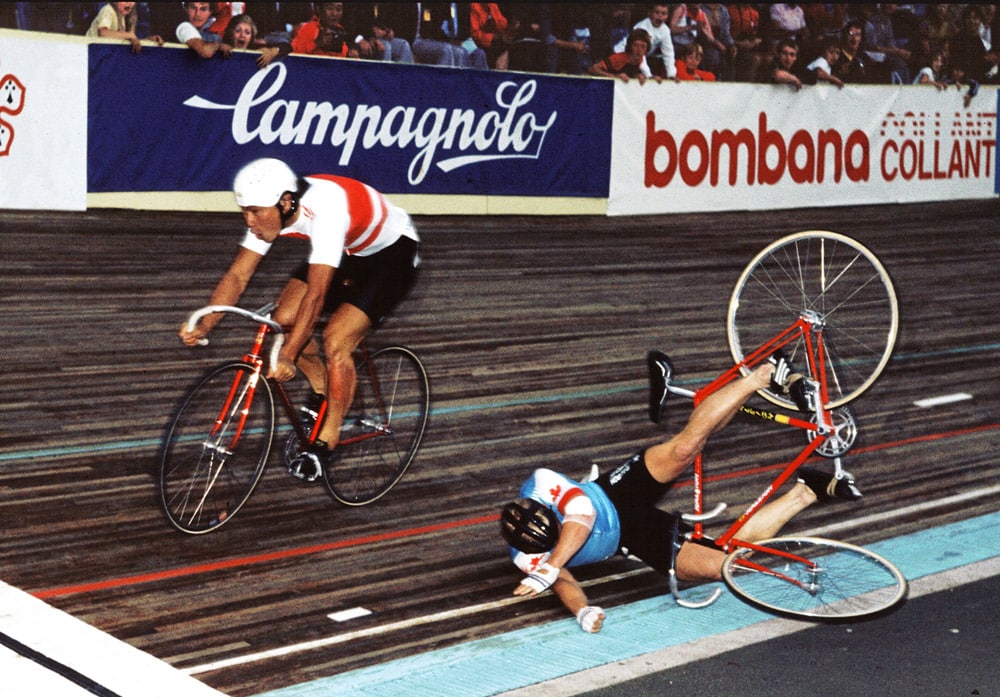 Then there’s Gordon Singleton; I was there that day in 1982 when it looked like he’d brought an end to Koichi Nakano’s reign as World Professional Sprint Champion. The Canadian had already beaten Nakano – lauded as the greatest Keirin rider in history and still a legend in Japan – in the Keirin final. But despite his humble bowing to the crowd the Japanese Keirin King, raised in an arena where sticking your knee under a rival’s handlebars at high speed was just part of the game, was a ruthless competitor and a decked and disabled Singleton had to settle for the silver medal. I can still remember the sound of Singleton hitting the Leicester boards – it was like some giant oak tree falling. 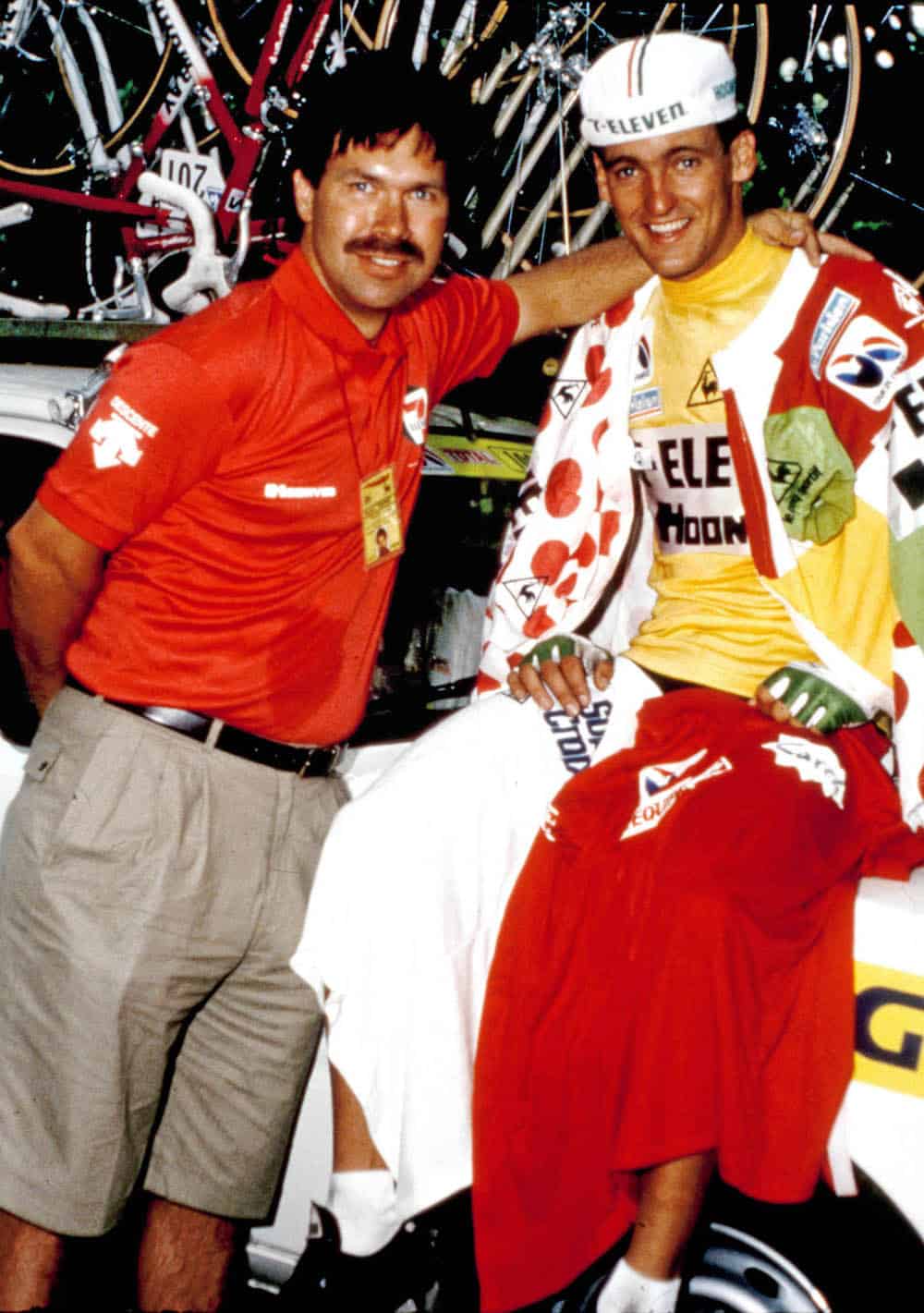 Then there’s Alex Stieda, like Singleton another Canadian legend I’ve had the honour of interviewing. My buddies and I were at that now legendary 1986 Tour where the Canadian grabbed yellow on Stage One after some very shrewd breakaway riding. Stage Two was a team time trial and we looked forward seeing the Canadian as part of smooth flowing 7-eleven pace line. However, the team did a fair impression of Napoleon’s retreat from Moscow with Stieda abandoned by most of his team mates, struggling along with a couple of faithful domestiques well down. A sad sight but no matter, the man had made history. 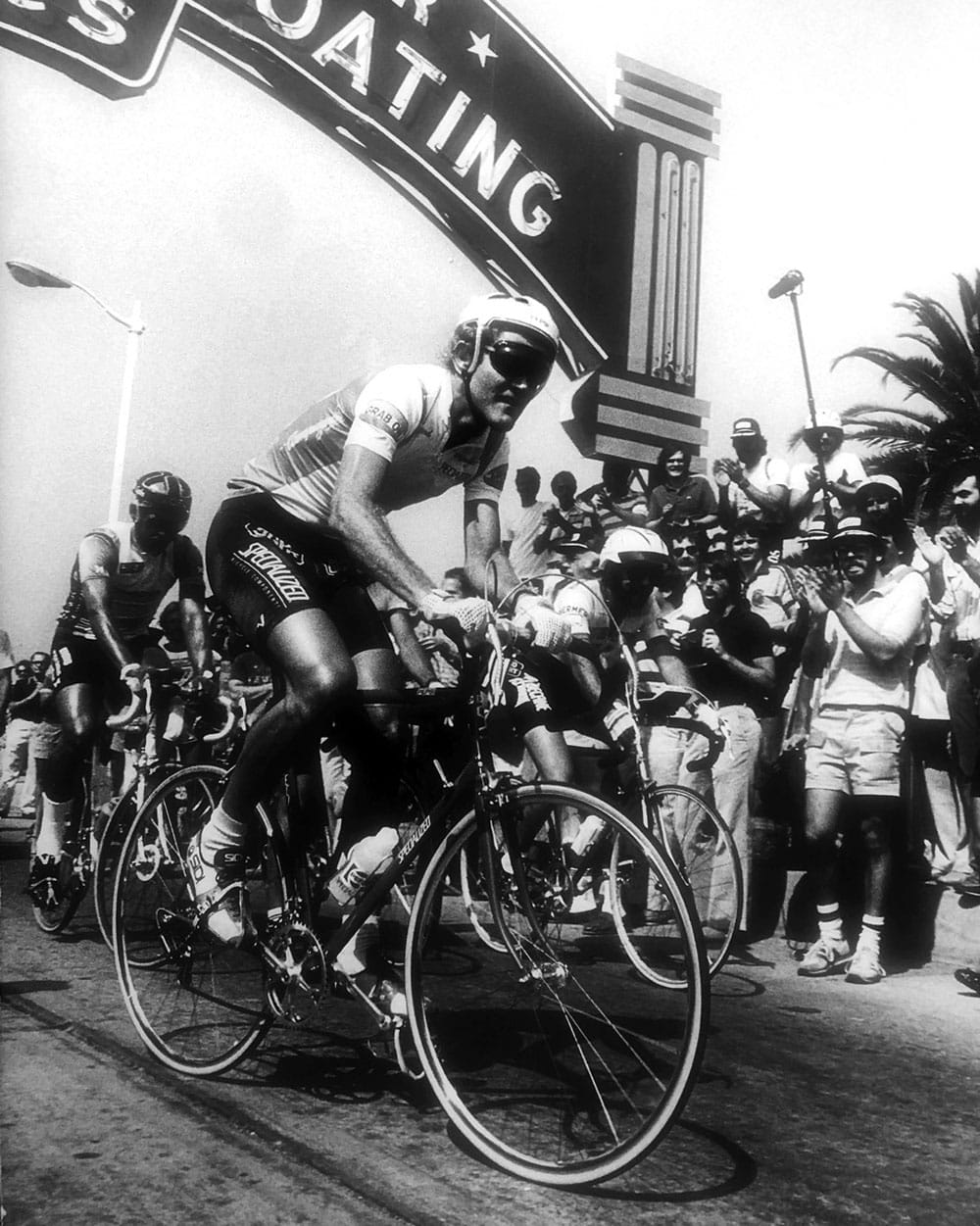 John Howard is in there too, a man who has done it all. Olympian, Race Across America pioneer, Tour of Britain Milk Race rider, Ironman winner, Fastest human powered man on the planet – 152 mph behind a 500 horse power pace car and one which not many know about, the last man United States competitor to win the Pan American Games Road Race, way back in 1971. It’s a very hard race to win given here’s an unwritten rule in the Pan Am Games peloton; ‘anyone but a Yankee!’ Albeit Ron Skarin won it twice for Canada – but Canada isn’t the USA… 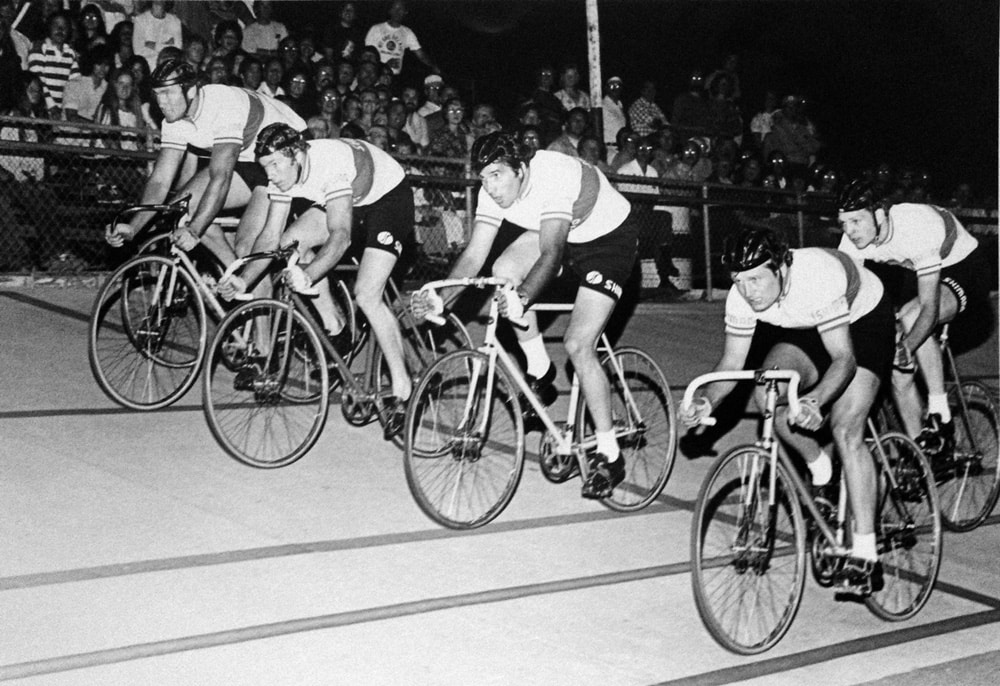 1974 Skip Cutting. The Shimano Professional Cycling Team competing against each other on the Encino Velodrome in Encino, California

Then there are riders whose prime came a little before my time who I’ve read much about but was delighted to be able to fill in gaps in my knowledge. Harry ‘Skip’ Cutting is one such, a three time Olympian and a Pan Am Games medallist, it’s an overused word but Cutting really is a ‘legend’ of US track sport with a career which saw him race in 28 countries and compete across the full spectrum of track events – sprint, pursuit, team pursuit, tandem and scratch. 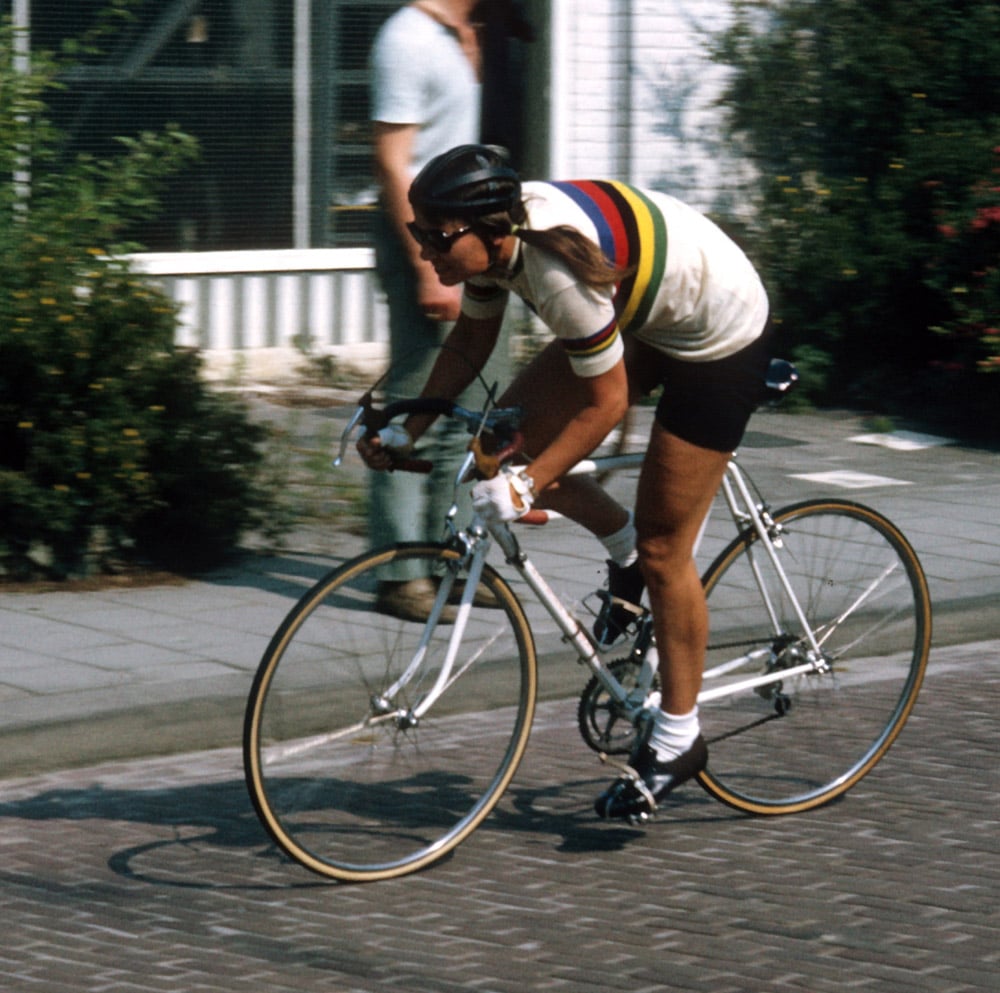 The women – I get flak if I say, ‘girls’ or ‘ladies’ these days in the PC world we live in – aren’t forgotten, not least the late, great Audrey McElmury who became the United States first world champion in any cycling discipline since 1912 when she won the women’s road race in the politically charged atmosphere of Brno in the former Czechoslovakia in 1969. The Russians had invaded some 12 months earlier and their athletes performances were greeted with stony silence whilst McElmury was one of the heroes of that Worlds series. She’d finished fifth the previous year so to aficionados it wasn’t such a big surprise but it was a huge result for US cycle sport – she would go on to finish fourth on a future two occasions in the Worlds but by then was very closely marked. 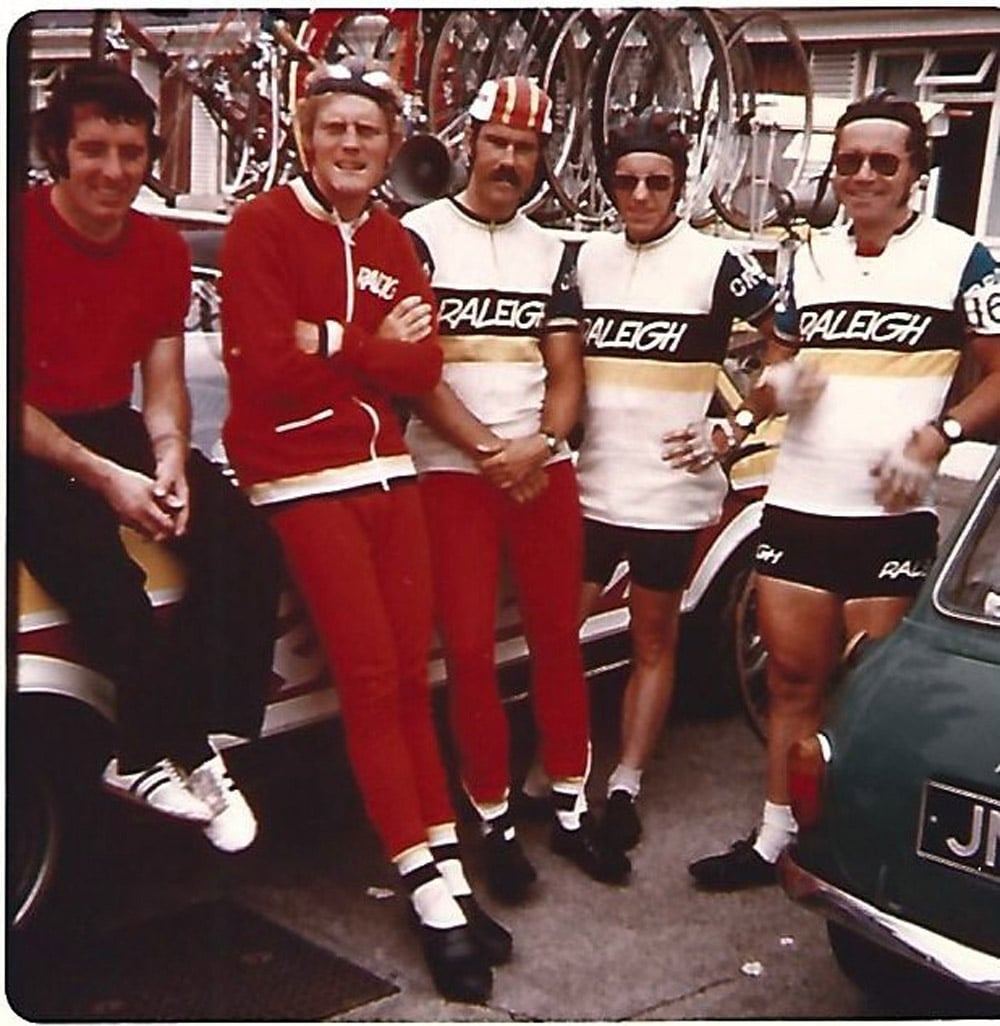 It’s a book no serious cycling historian should be without and I look forward to volume two, which is, ‘in the works.’ 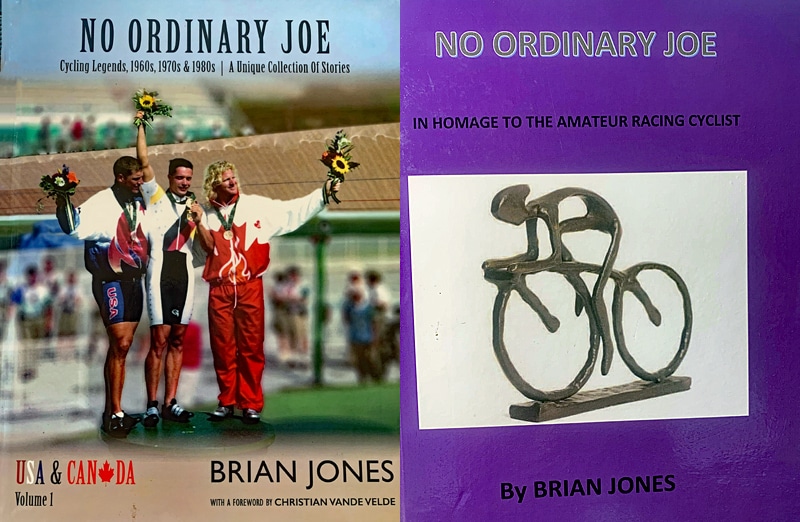 VUELTA’22 Stage 2: Bennett Bounces Back for the Win!