It is undoubtedly one of the great joys of cycling to admire the passing landscape, whether discovering unknown byways, observing the Tour de France on television or noting the change of season on your commute. The introduction of the bicycle in the 19th Century opened up new possibilities to the average person that we can scarcely comprehend more than 100 years later. A recent scholarly book from the MIT Press is the result of a great deal of digging in the archives to produce a picture of a cyclists’ world far different from ours yet we face many of the same issues today. 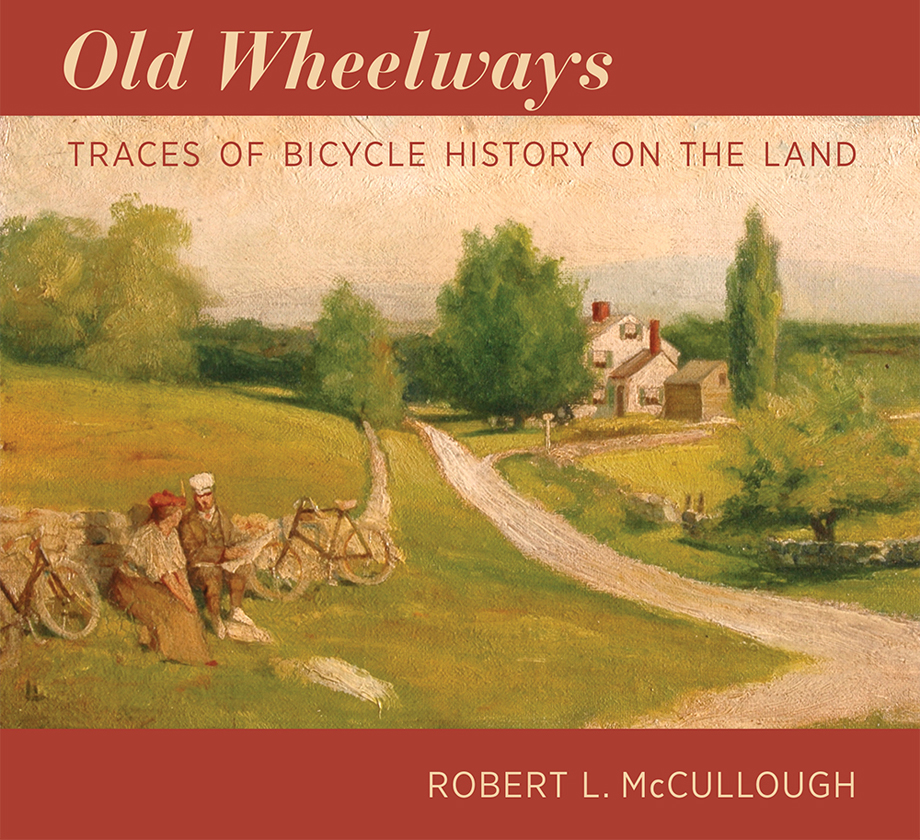 “Old Wheelways: Traces of Bicycle History on the Land” by Dr. Robert McCullough of the University of Vermont is an impressive attempt to bring back a lost narrative, of a time when cyclists were keen observers of the countryside, adventurous travelers and shapers of the landscape itself as they sought to build roads and pathways for their passion. Their stories have been overlooked for the most part by historians but are instructive as the revival of cycling, as sport and transportation, has meant re-engagement in the struggle for the right to the road. As the author points out this conflict was present from the beginning as this new form of locomotion appeared in a world of horses, carriages, trolleys and, as always, pedestrians.

After a brief recounting of the technical evolution of the bicycle, we move into the revolutionary concept of bicycle touring. Travel by train was at high speed and did not allow for much detailed observation, while going on foot meant limited progress. The bicycle, coming of age at same time as popular illustrated magazines and photography, captured a new enthusiasm for travel and tourism. 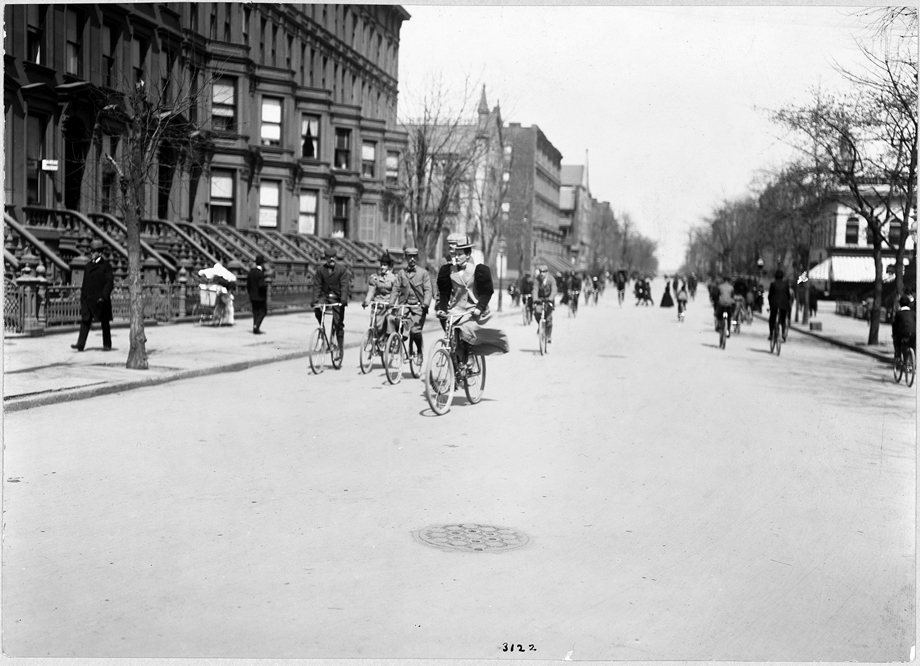 “A self-powered cyclist charting an unknown course is forced to observe land features that other travelers, those reliant upon shared, route-bound transportation, are unlikely to notice. Moreover, attaining a sense of escape did not depend upon traveling great distances, and a day’s round-trip of fifty or sixty miles, common in 1885, could place a cyclist in territory fully as unfamiliar as far-off destinations—and just as adventuresome.”

This era of travel adventure is marked by an impressive number of quality cycling publications and accounts of riders making heroic treks, such as Thomas Stevens’ circling the world on a high-wheeler, starting in 1884 and completed in 1888. The advent of the much more practical safety bicycle suddenly meant that those not as bold, athletic or tenacious as Stevens could undertake their own adventures and the book speaks of these new cyclists and their experiences. The great enthusiasm for cycling that swept America—and this book focuses almost exclusively on the northeastern United States—led to new organizations, whether for lobbying, such as the mighty League of American Wheelmen (LAW) and the Good Roads Movement, or for actual construction of suitable riding surfaces. 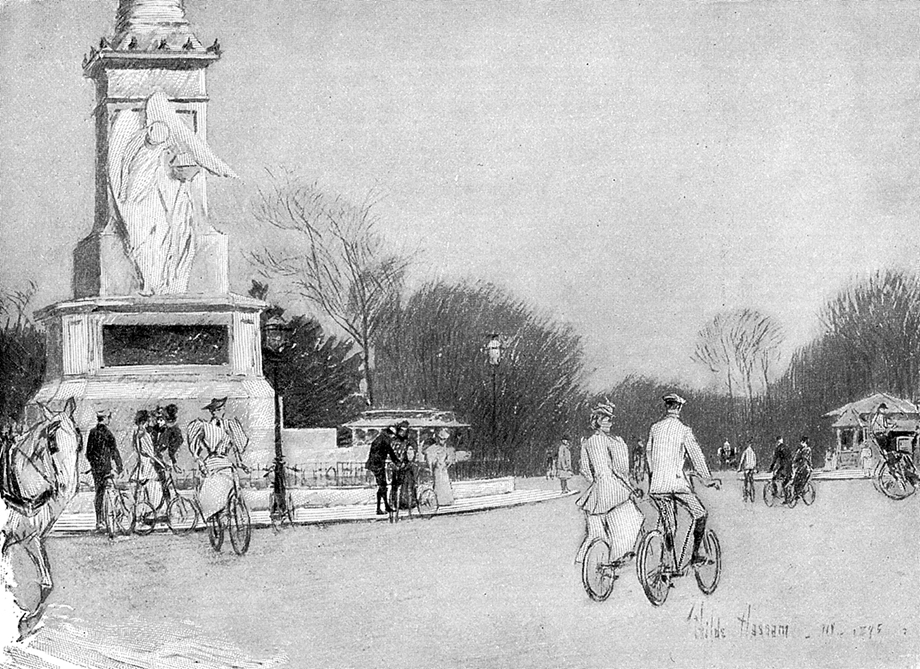 The middle section of the book is devoted to a detailed account of the construction of “sidepaths” in a number of regions, particularly in New York and Pennsylvania. These were narrow paths specifically constructed for bicycles on either side of a road leading out into the countryside. The book has many charming illustrations including period photographs and one can quickly see that the smooth sidepaths, usually cinder-surfaced, would have been preferable to the rutted dirt cart roads next to them. To a modern viewer the images are odd because it shows a world without automobile traffic, a place where bicycles occupy some kind of utopian landscape, a place where you could go for a ride without risk of being flattened by an uncaring motorist.

The industriousness of cyclists in cities such as Lockport, New York, is remarkable in the rapid construction of sidepaths, building up extensive networks that have more or less disappeared without a trace in the intervening years. Committees were formed by individuals, and then formal municipal and regional organizations came into being. As one leafs through the detailed account of the sidepath battles there is a sense that people were building for the future, recognizing that their towns and cities would spread out further and further. There were surprising conflicts not just between those wanting space on the roads for carriages or sidewalks for pedestrians but also between the cyclists behind the Good Roads Movement and the sidepath people, the former believing that if good roads were built there would be no need for sidepaths and the latter wanting to ensure a space suitable for safe transit by cyclists. The argument for separate bicycle accommodation has returned in modern times. 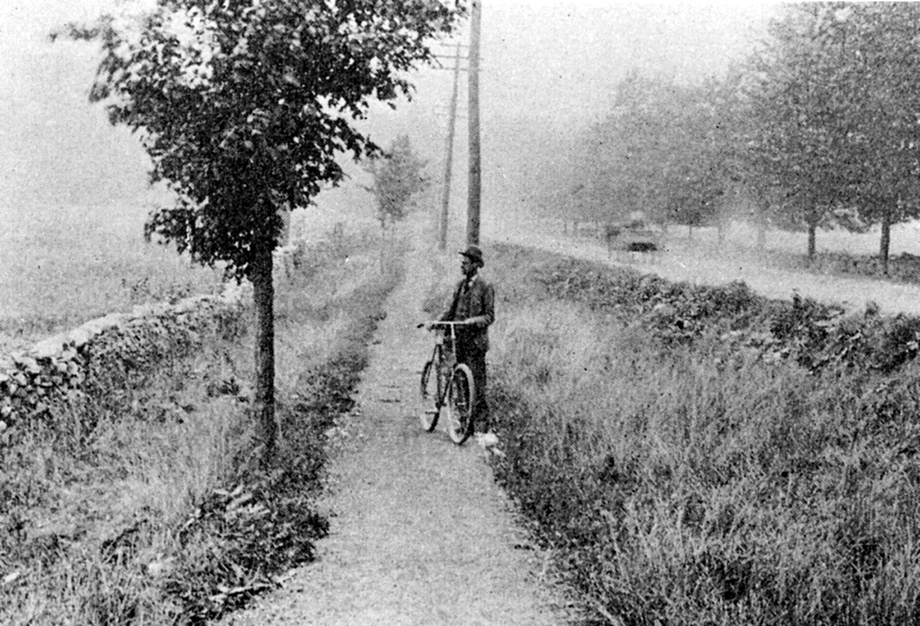 The sidepaths were constructed inexpensively and quickly. As rapidly as they were built in the 1890s so they disappeared less than a decade later as the bicycle craze evaporated, victims of uninterest, lack of affordable maintenance and prey to widening roads and development.

From the sidepaths that took riders into the countryside, the book moves into cities and the attempts to incorporate the new craze into traffic planning in the booming cities of the day. The most celebrated achievement was the bicycle path to Coney Island in Brooklyn but there were other notable efforts, including the ill-fated attempt to build a route alongside the aqueduct to the Croton Reservoir.

Moving off the streets brought cyclists into city parks, the development of which seemed to be undertaken in every major city in America at the time. Cyclists pursued their rights to ride in Central Park in New York, Fairmont Park in Philadelphia, Delaware Park in Buffalo and numerous other green areas, all of which appear to have been designed by the firm founded by Frederick Law Olmsted. The Olmsted people were not particular fans of bicycles as they believed that their parks were meant for quiet contemplation of the green landscape, something unachievable by “scorchers” racing by on their two-wheelers. These landscape architects seemed more amenable to helping develop paths between parks, another topic in the book. Interesting plans to allow passage of trolleys, pedestrians, automobiles and bicycles were considered and are illustrated with the original plans. 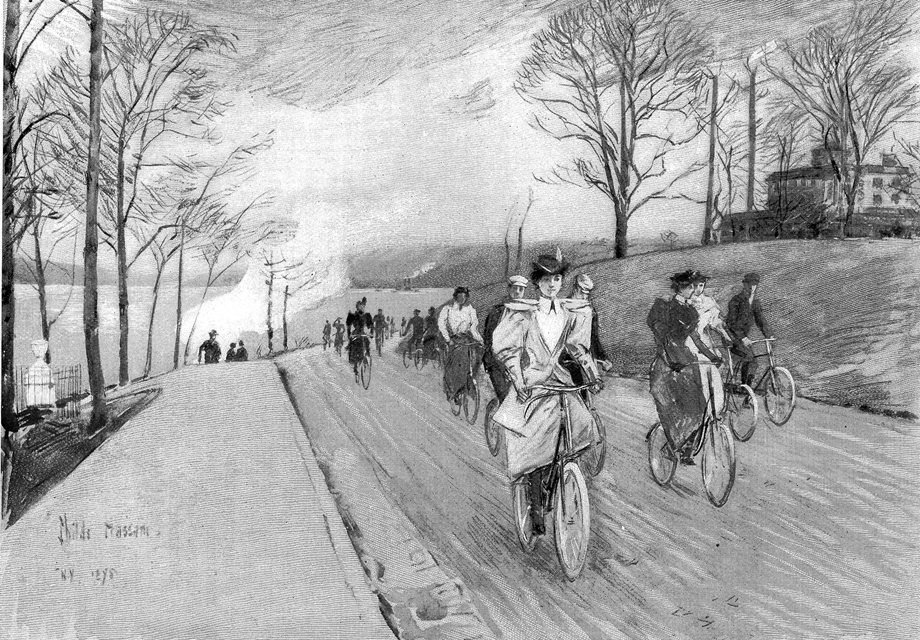 By 1905 bicycles had plummeted in popularity and except for a few fleeting moments nobody paid much attention to what was eventually seen as a child’s toy. There is a fascinating coda as efforts to develop bike paths in New York resumed in the late 1930s under the unlikely leadership of Robert Moses, one of the most important figures in urban planning and who, to a very large extent, is responsible for the car-focused world we live in today. Moses felt that no bicycle should ever be on a highway and made some effort to ensure safe cycling areas directed at children. Dr. McCullough relates a fascinating story about how in 1956 Moses, as Chairman of the State Council on Parks, received a letter suggesting that abandoned railway rights-of-way might be turned into cycling facilities. He dismissed the idea, which in our time has become the very successful rails-to-trails concept, an idea which has spread beyond North America to Europe as well. 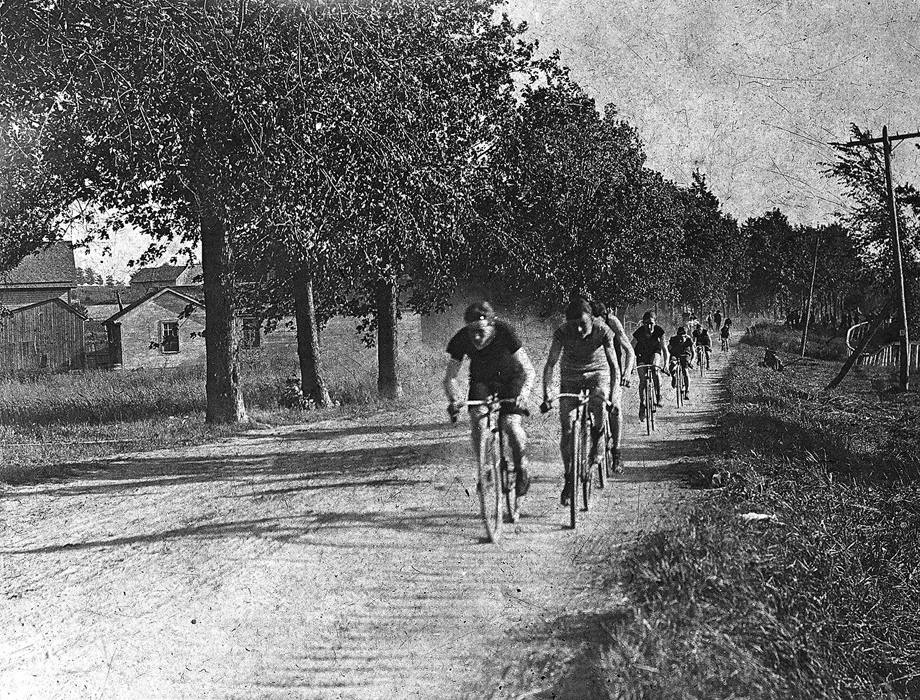 “Old Wheelways” is a thoroughly-researched academic work. You cannot (and should not) scorch through this as the degree of detail suggests it should be considered carefully—and the rather tiny font MIT Press has chosen does not help in the reading! The source material is extensive and the Notes and the Bibliographic Essay deserve your attention. The illustrations, as noted, are very charming and include reproductions of site plans, maps, photographs and period engravings.

The book’s narrow regional focus means that consideration has not been taken of other areas. One cannot help but wonder if the bike craze had not died so suddenly and the sidepaths had not become overgrown and the broad boulevards with their multi-lane sections for each conveyance had been built as planned the northeastern United States might have become a model for sustainable transportation. Cities today renowned for their clean and efficient infrastructure using public transport, pedestrian zones and elaborate cycling networks have made a conscious effort to do this over the last decades. “Old Wheelways” reminds us that the fight has not yet been lost in our time but it would have been so much easier to build this world decades ago so that today we would be speaking of Rochester or Buffalo or Lockport in terms we reserve for Amsterdam or Copenhagen. 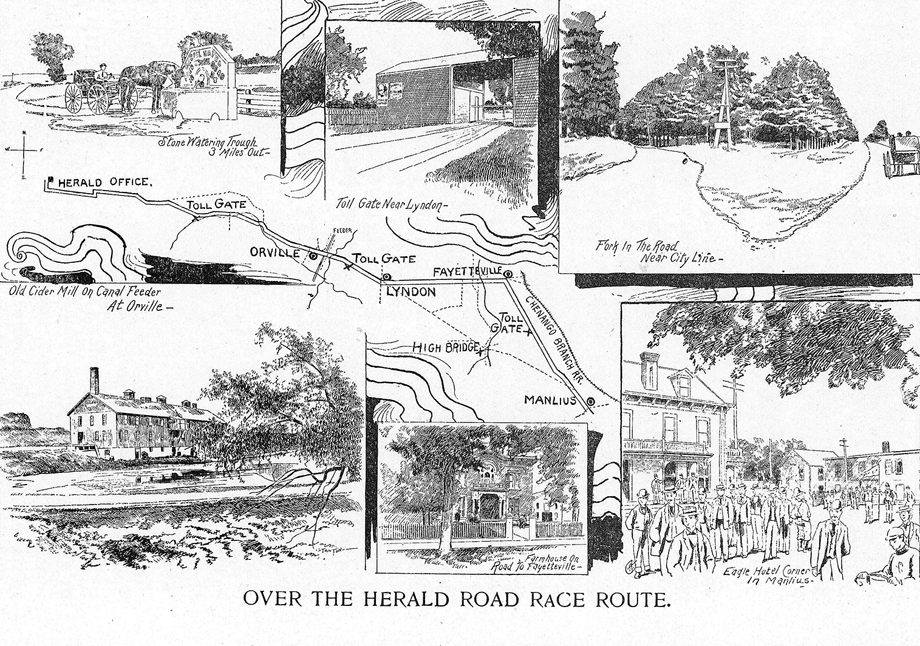 “Old Wheelways” is a delightful and thought-provoking look at a world that the bicycle changed—at least for a while. And any book written by a university professor dedicated “to Montpelier’s indomitable cyclists, and to its noon peleton” is our kind of book! 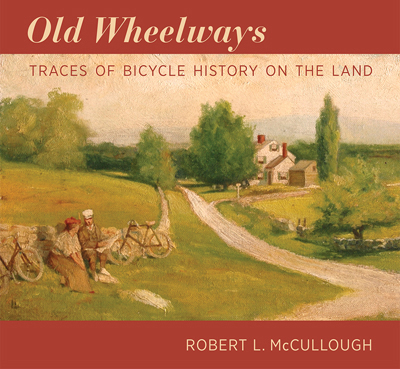 When not scorching along sidepaths, Leslie Reissner may be found being indomitable at www.tindonkey.com.