Who writes cycling books? Pro riders of course, as do sports journalists, coaches, adventure travellers, social historians, photographers, psychologists, bike collectors, philosophers, some repentant dopers, and one novelist (since nobody but Tim Krabbé counts). But never before has there been such a big cheerful book as “Paul Smith’s Cycling Scrapbook” to celebrate being a mere fan. With the accumulated cast-off detritus to prove it! 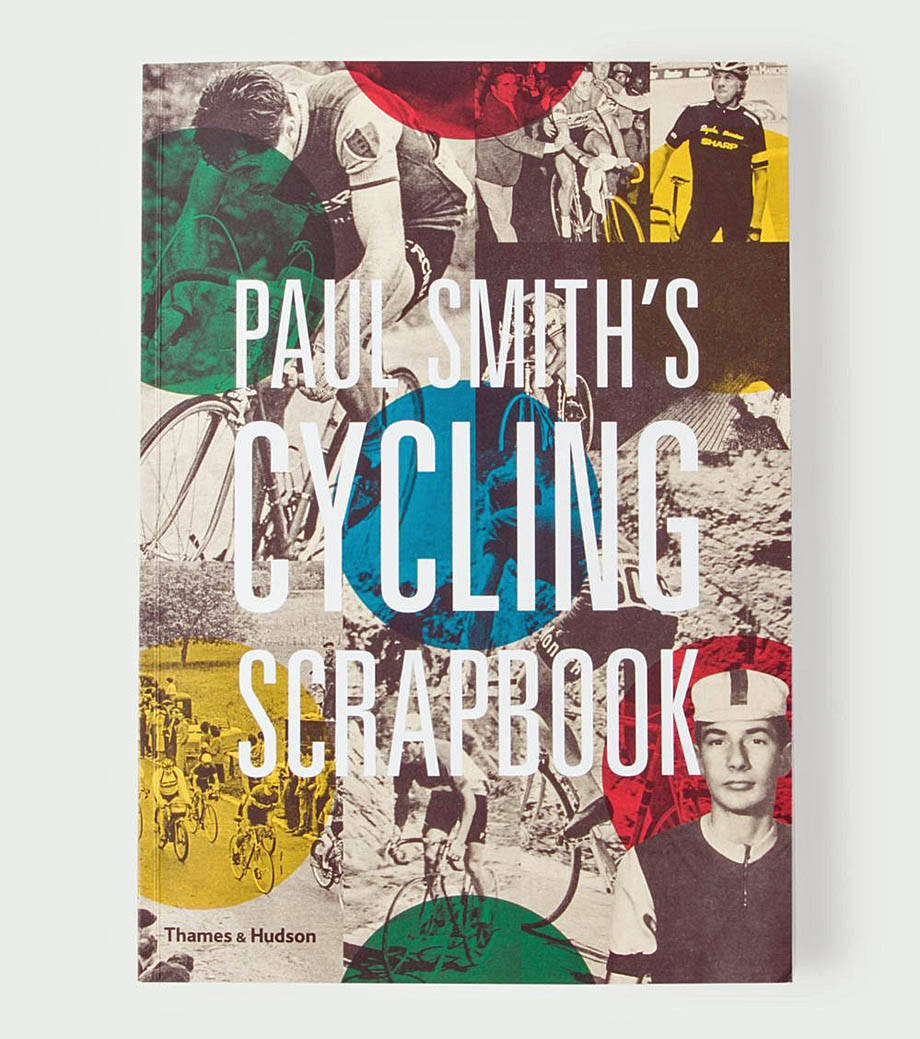 I first became aware of Sir Paul Smith in 2013, when he was asked to redesign the Maglia Rosa and the other leaders’ jerseys for the Giro d’Italia that year. Choosing a British designer seemed a bit odd to me, given the sometimes chauvinistic feelings of the Italians, whom I believe do not lack for fashion people of their own. Then I read an interview with Sir Paul in which he talked about his design work for Mercian Cycles, an English brand of long repute, and at the end of a series of bike-related questions he was asked: “White socks or black socks?” to which he replied: “Is there any colour but white?” and then I knew here was a paragon. 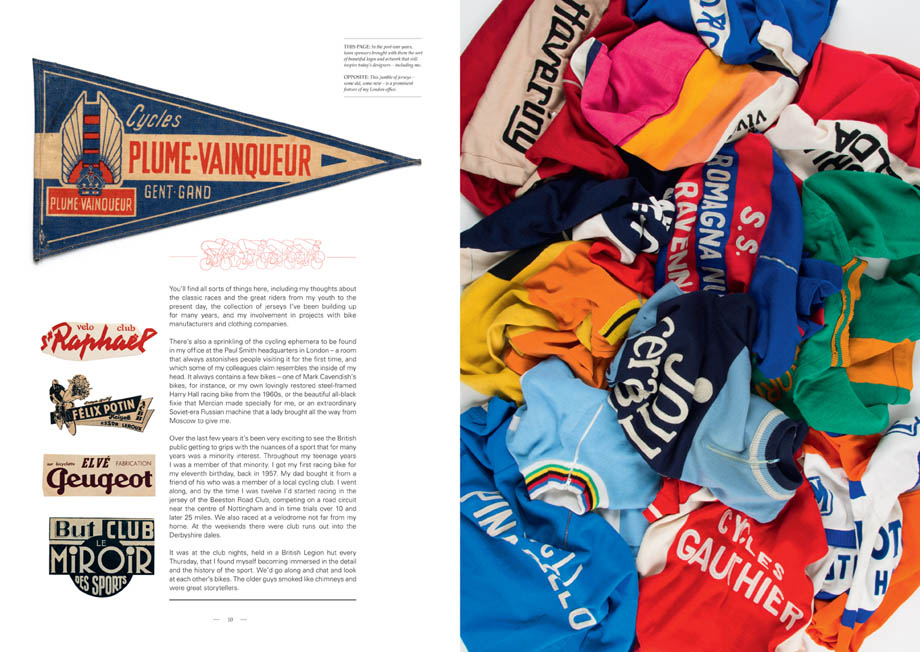 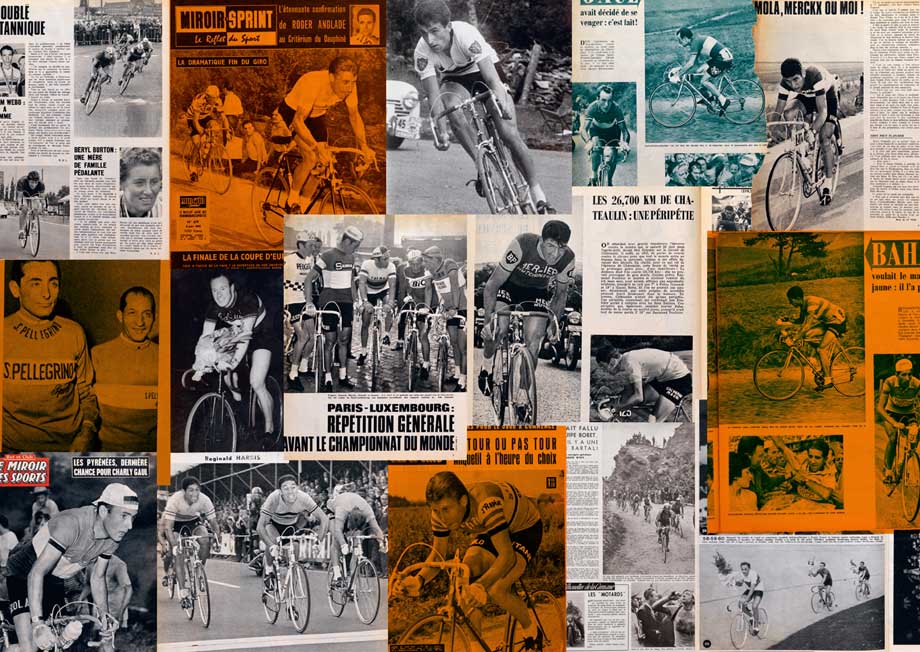 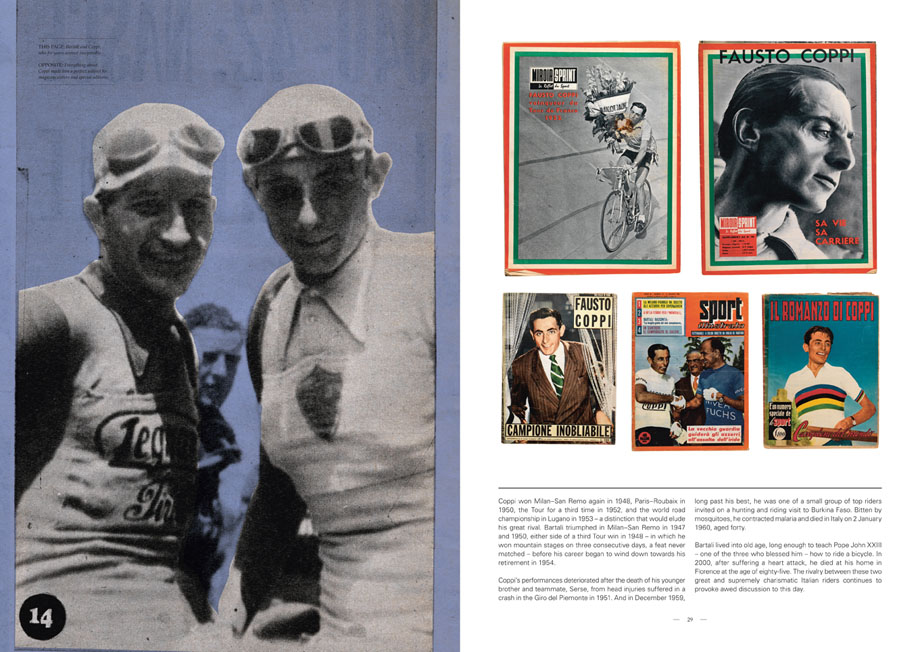 In 1963 teenaged Paul Smith was riding his, yes, Mercian, at speed through the suburbs of Nottinghamshire when, apparently blinded by the sun, he rode into the back of a car, went right over the top and crashed down into the hood before hitting the ground. Lots of damage ensued and the three months he spent in the hospital as a result meant the end of his dreams of becoming a pro cyclist. He began to hang out with art college students, went on a course to learn how to do tailoring, opened up a small shop in 1970 and did quite well as there are now 300 Paul Smith shops around the world. In addition to collaborations with non-fashion companies such as Land Rover, Sir Paul has worked with the Rapha clothing company and designed a special jersey for the 2007 Grand Départ of the Tour de France in London, now a real collector’s item in its own right. Knighted for services to British fashion in 2000, a 2015 article in the UK’s Telegraph newspaper noted: “In the 1980s he was credited with single-handedly reviving boxer shorts as men’s underwear of choice.” 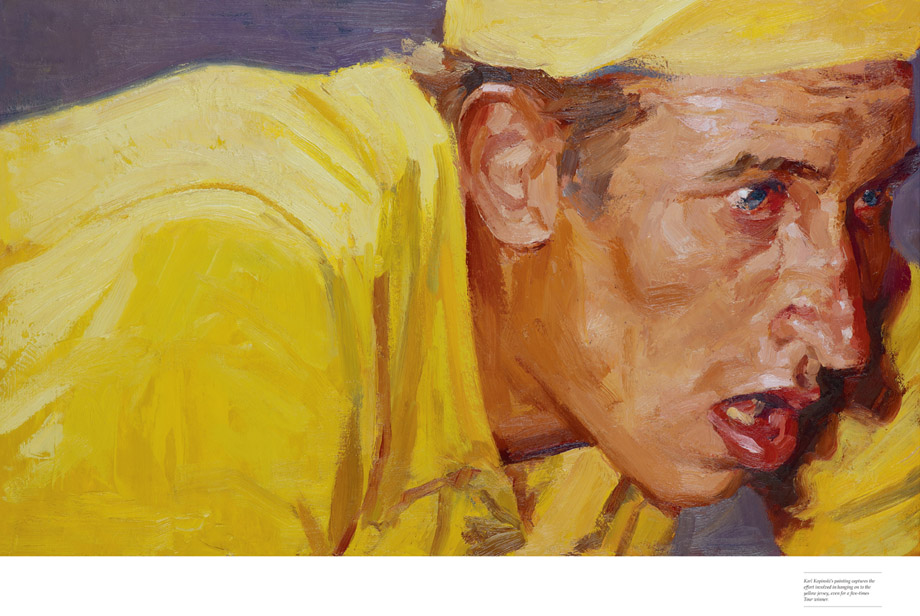 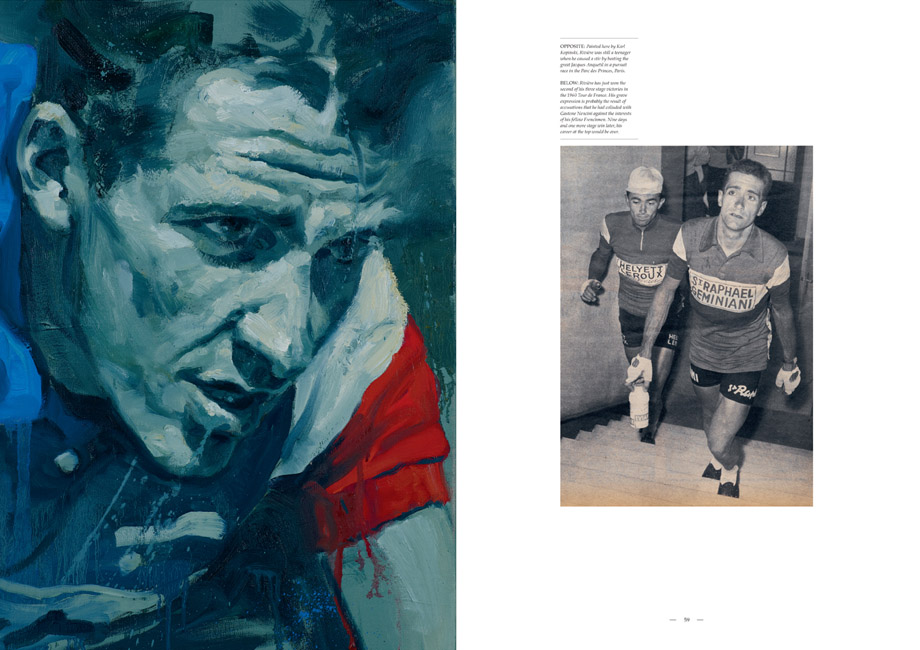 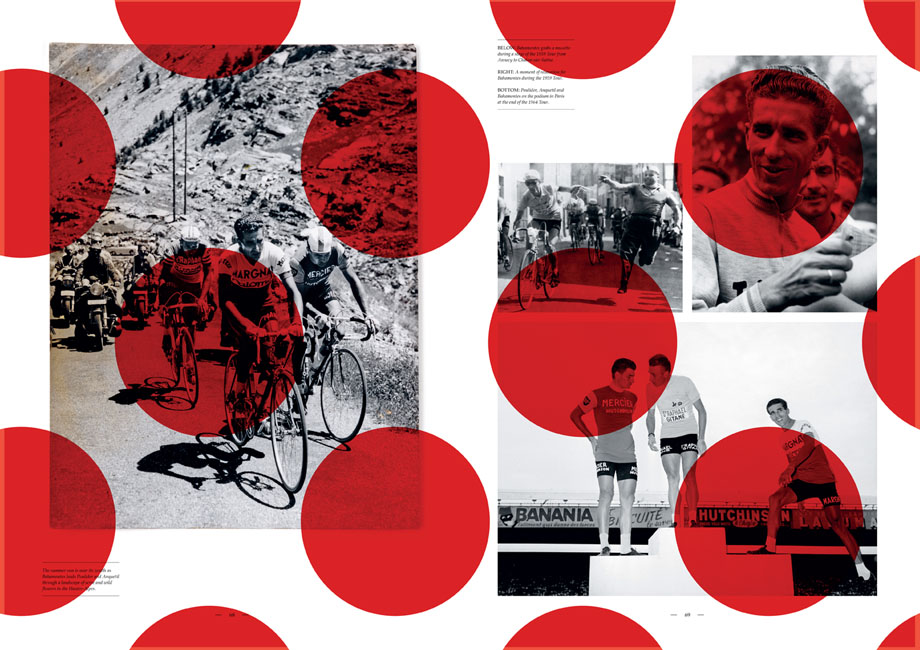 But in spite of such heroic accomplishment, Sir Paul does not seem to have given up his enthusiasm for cycling and his great big scrapbook is exactly that: a collection of newspapers, photos, and artifacts that clearly mean a great deal to him but that he is keen to share with the world. 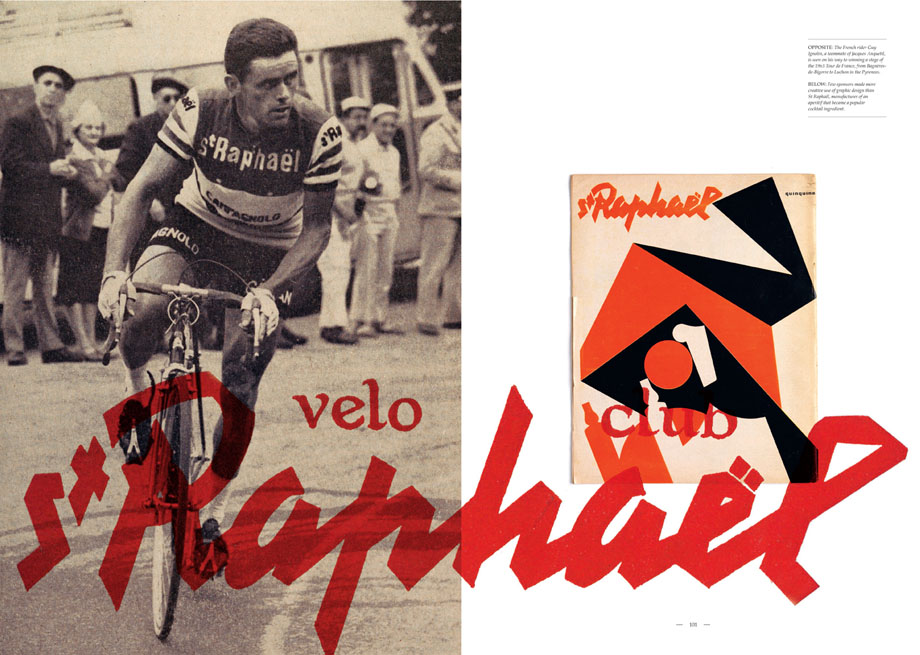 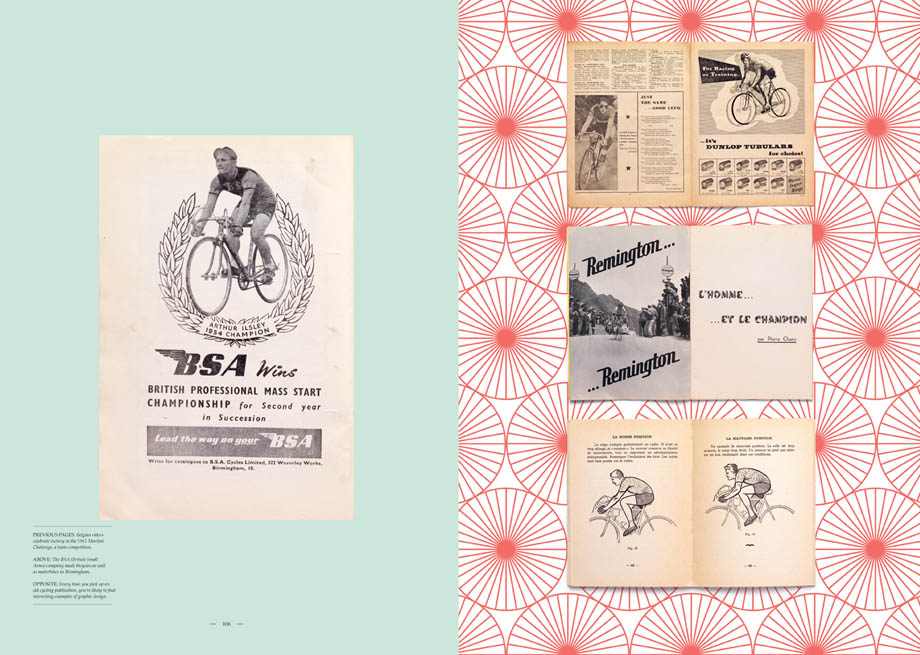 After recounting the story of his cycling youth in a prologue, Sir Paul’s book is nicely sorted into thematic chapters. It begins with his cycling heroes. These would be the idols of someone born in 1946 and an impressionable teenager when these greats were on the road: Coppi, Bartali, Charly Gaul, Anquetil, Bahamontes, Poulidor, the tragic Roger Riviere and Tom Simpson. Beryl Burton is here, along with track star Reg Harris, but by the time Eddy Merckx came onto the scene, up-and-coming entrepreneur Paul Smith was focused on other things and his fandom seems only to have become re-engaged with the success of British cyclists. “Contemporary Heroes” is devoted to them: Cavendish, Wiggins, Pendleton, Cooke, Brailsford, Hoy, Millar. 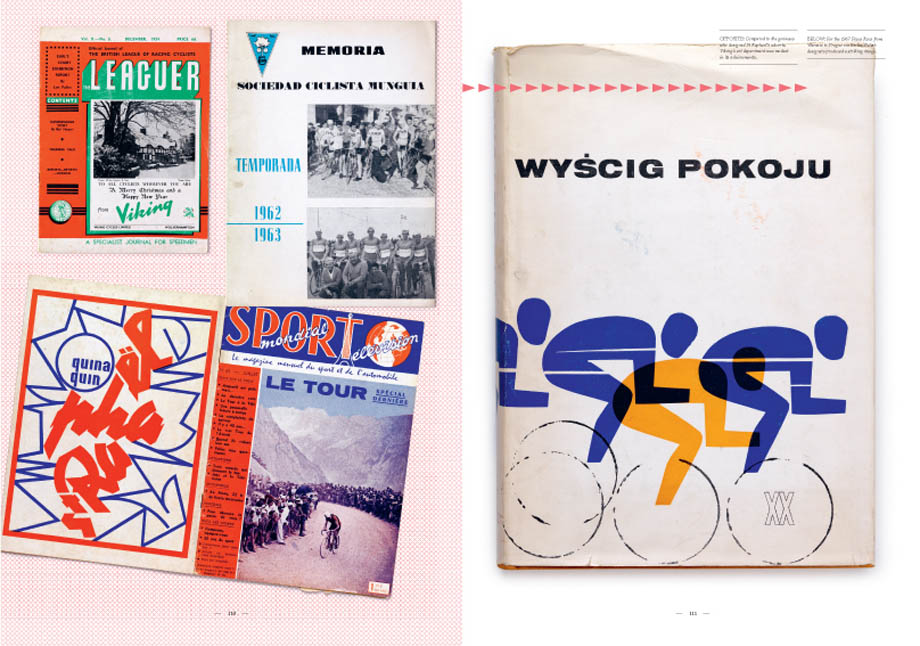 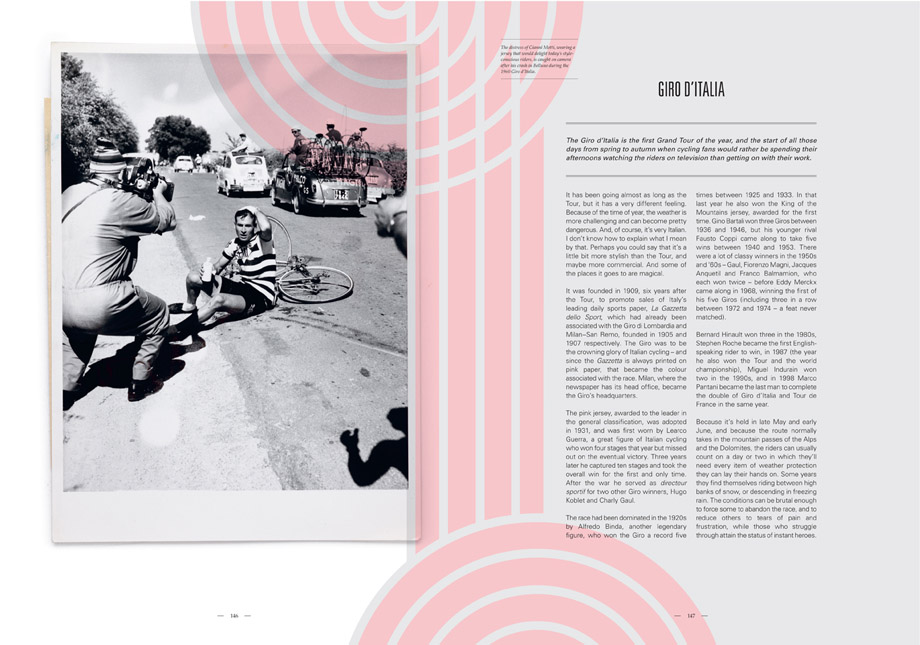 Sir Paul has a love of many of the great races and there are wonderful images from his early fan period from Milan-San Remo, Paris-Roubaix, the Grand Tours, the Tour of Britain and velodrome action. His respect for cycling’s traditions is evident throughout the book. As a designer, he is deeply impressed with the “look” of cycling and devotes a chapter to it, writing:

He has thoughts about the look of team jerseys (and shorts should just be black) and believes that cyclists “were the pioneers, and I suppose for me this was a first encounter with the effect of graphic design on clothes—and on the world in general.” And as a successful and innovative clothing designer, it is no surprise that Sir Paul has accumulated a collection of interesting old cycling jerseys which, as people learned of his collection, have been supplemented by many new jerseys, usually autographed by notable riders. 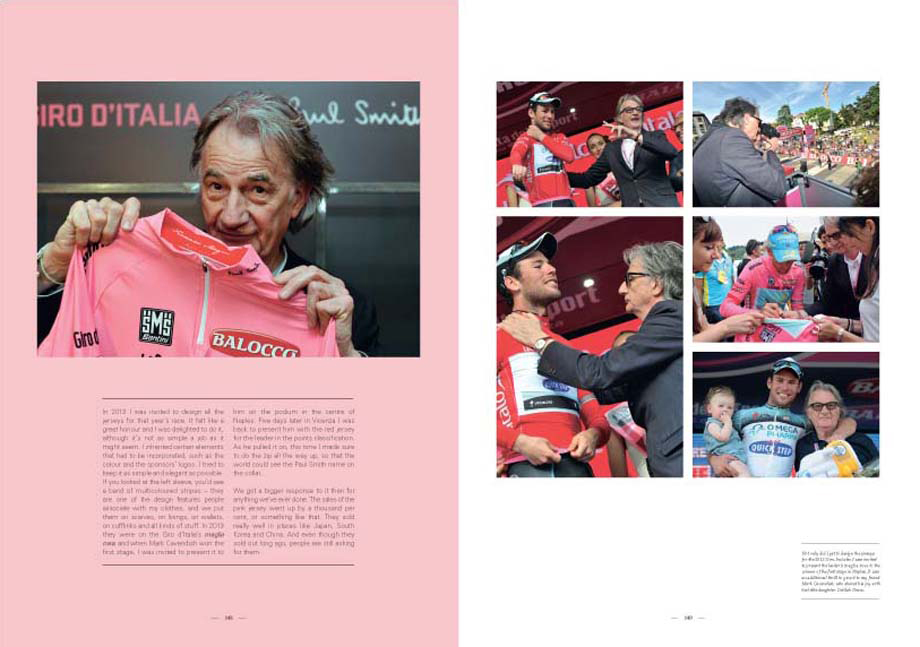 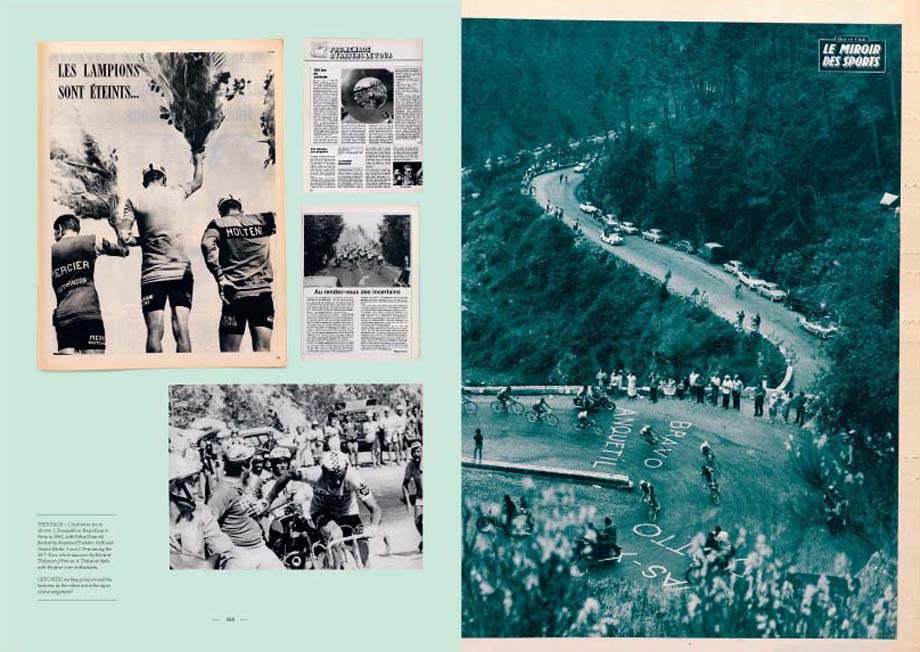 Most captains of industry would not write: “Sometimes a visitor will come to my office for the first time and mistake it for a bike shed. I like having bikes around, and these are bikes that mean something special to me, either from my own past or because they’ve been given to me.” He lovingly describes the bicycles of his youth, including a fixed-gear Claud Butler that he commuted with but also rode on the track. He shows some of his paint schemes for Mercian, which are all bright and cheerful, and writes about his own fans who show up from places like Estonia to give him a personalized bicycle. He has a pair of bicycles from Bradley Wiggins and, astonishingly, the Pinarello that Mark Cavendish won the Road World Championship on in Copenhagen in 2012. This was given to him by Cavendish, having only been ridden a total of seven times! 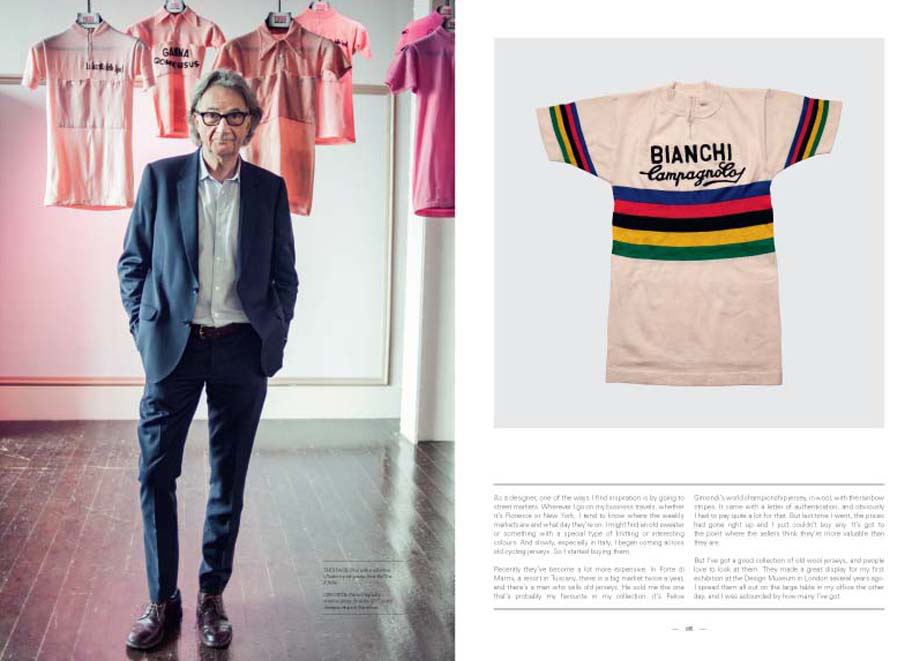 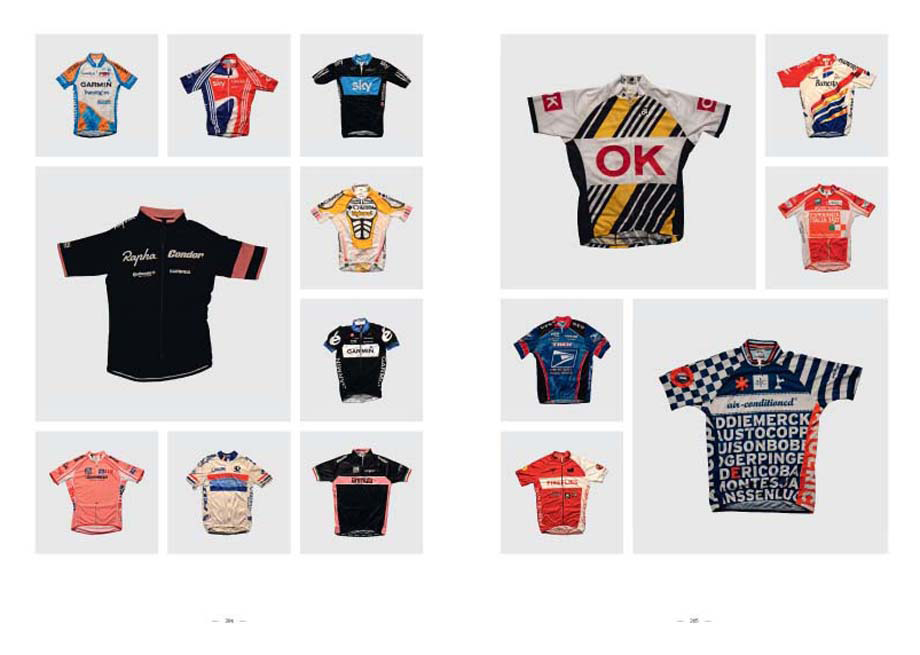 Sir Paul concludes his scrapbook with an account of his visit to Castellania, Fausto Coppi’s hometown and what a thrill it was for him to see the environment where Il Campionissimo was raised. His respect for the past is not nostalgia—a yearning for the return of the past, as he describes it. 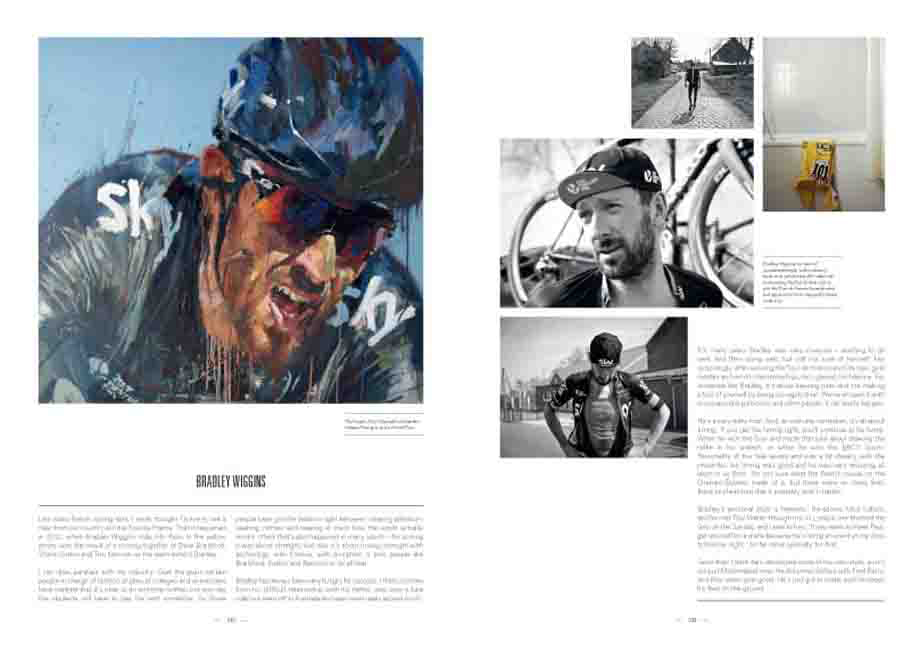 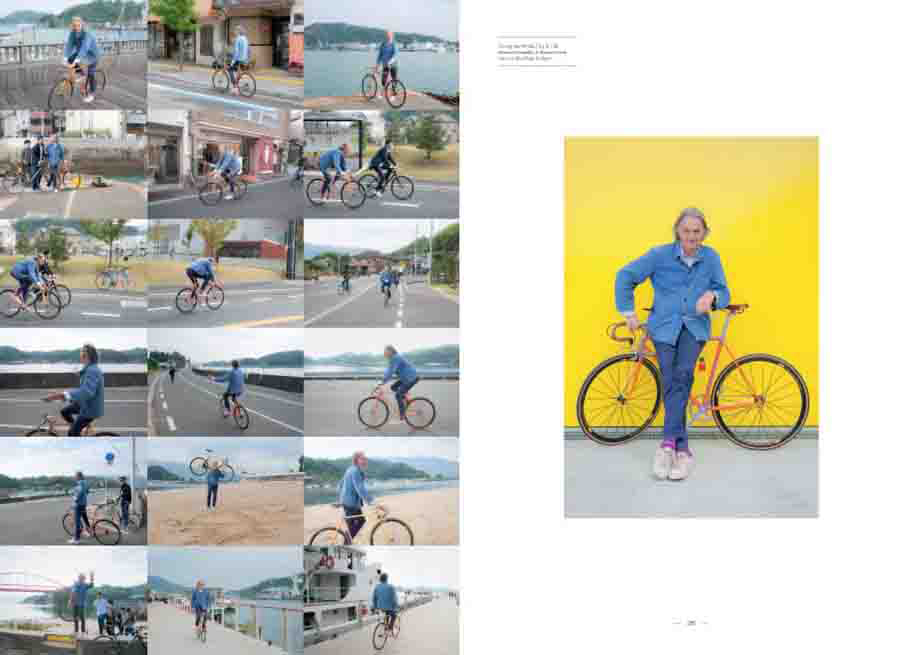 Citing the famous Faulkner quote (“The past is never dead. It isn’t even past.”), he goes on to write:

What a joy it is to join Sir Paul in his happy recollection through his books and magazines and jerseys and pennants and bikes! This book does credit to both him as a fan and to the publishers’ own designers who were responsible for this unique and striking effort. 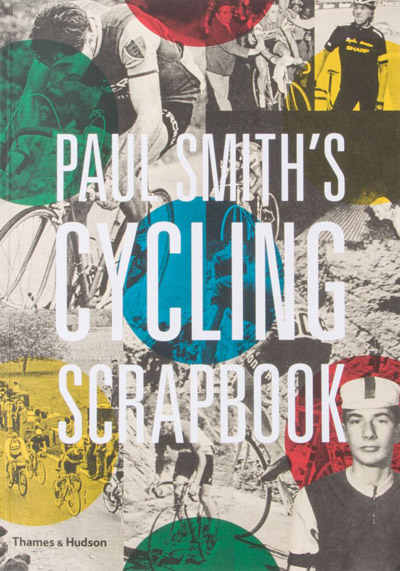 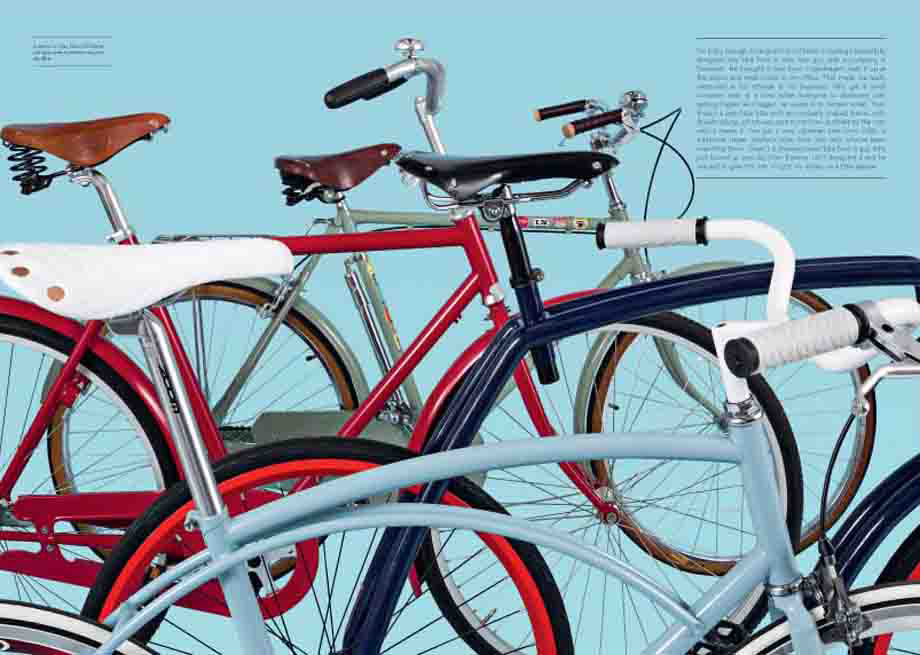 When not lusting for a Paul Smith Mercian with barber pole stripes on the seat tube, Leslie Reissner may be found arranging his white socks as Coppi would have done at www.tindonkey.com