PEZ’s Literary Editor Leslie Reissner is continuing his look at books that aren’t your everyday, run of the mill standard cycling publications this week with a review of ‘Rebour – The Bicycle Illustrations of Daniel Rebour’. From 1945 until the early 1980s Daniel Rebour made hundreds of meticulous drawings of any and all interesting developments in the realm of bicycles and they’re detailed in this unique book.

Every subject has its celebrated artists: think of Michelangelo and the human form; Audubon and birds; Stubbs and racehorses; Warhol and soup cans. Of course, our sport is no exception and while many will argue that Frank Patterson’s pen-and-ink bucolic English scenes of early 20th century tweed-clad gentlefolk smoking pipes while relaxing in front of a thatched-roof pub are the finest (and dreamiest) representations of what we cyclists imagine life to be, it is a disappointment that Mr. Patterson was not a cyclist himself and hardly even left his cottage, mostly never seeing the places he drew. 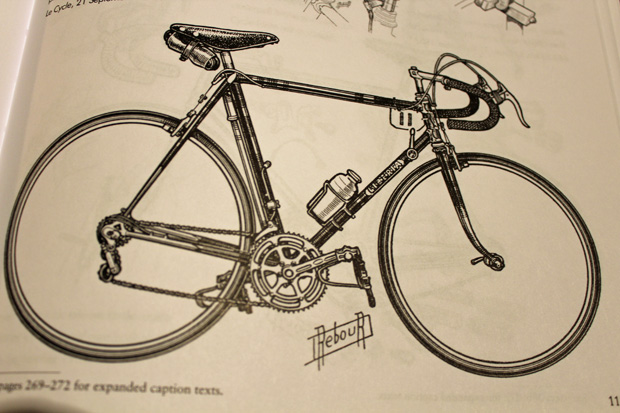 So we must look across the Channel for inspiration and here we find the indisputable master of technical drawings of bicycles, their parts and accessories: Frenchman Daniel Rebour. His thousands of drawings are scattered throughout old magazines, catalogues and other publications seldom seen, with the most notable collection being in a Japanese book published in 1976. But now Cycle Publishing has issued a superb hardcover book featuring 2,000 of the master’s drawings with brief captions in English to charm all of those with a love of vintage machinery and classic draftsmanship. Captions are by Rob van der Plas, a mechanical engineer himself, with contributions by Frank Berto, another engineer whose vast collection of cycling magazines was a primary source for the illustrations in the book. 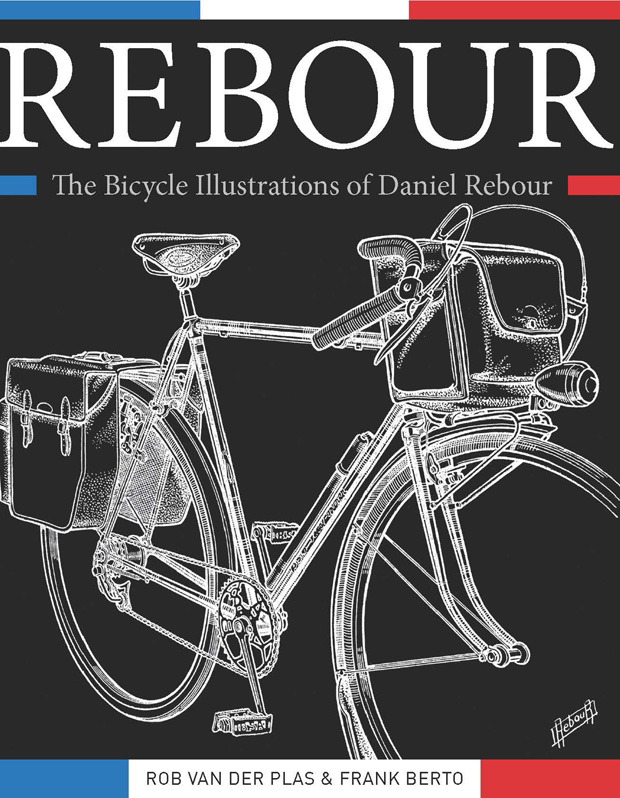 Daniel Rebour was born in LeHavre c. 1908 and studied technical illustration in Paris, graduating in 1928 and soon finding work as a test rider and illustrator for a motorcycling magazine. During the Second World War he illustrated car parts catalogues and then moved to Biarritz. Directly after the war a friend approached him about joining a new magazine, Le Cycle, as an illustrator and technical editor. The first issue ran in September 1945, with the magazine appearing as a weekly, then bi-weekly and finally monthly. It continued until the collapse of the French industry after the mid-1970s bike boom, with the last number coming out in December 1975. 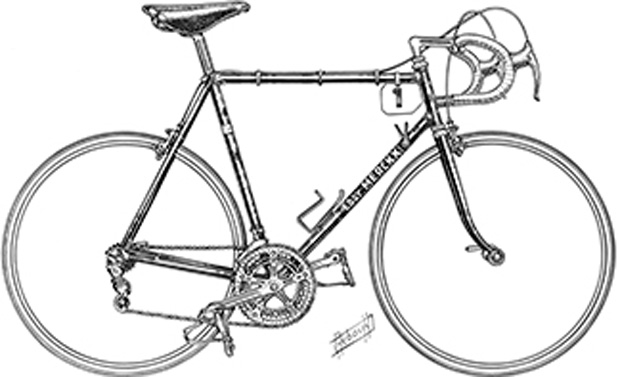 The detailed drawings continued but now mainly found themselves in catalogues, including those produced for André Bertin, Réne Herse and the VAR tool company. Bertin imported components from several Japanese manufacturers, including Shimano and SR, and so the selection in the book extends beyond classic European products to include the then-new ones from Asia. Rebour published into the 1980s and passed away in 1991. 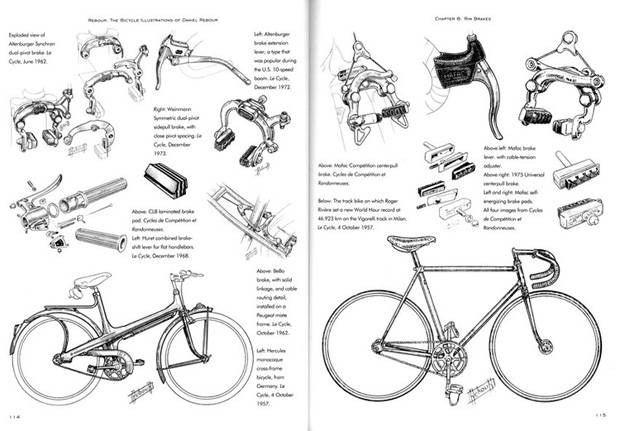 The book comprises work representative of the entire period of Rebour’s output from the 1940s through the 1980s, arranged in 28 chapters divided into components (derailleur gearing, drivetrains, pedals and clips, rim brakes, etc.), accompanied on the lower half of each page with drawings of entire bicycles. The latter includes many of the race-winning mounts of famous cyclists of the epoch including Ferdi Kübler, Eddy Merckx, Jacques Anquetil, Raphaël Géminiani, to name a few. There are many familiar names—Campagnolo, Simplex, Huret, Shimano, Peugeot—and many that are obscure or forgotten entirely now, such as Narcisse, Jeunet, Follis, Cardinale, that vanished when the once-dominant French industry faded. 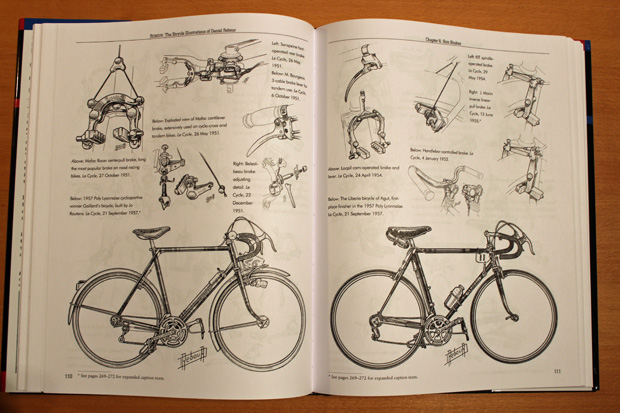 Rebour seems to have drawn everything and beyond the obvious (Campagnolo Super Record parts, Brooks saddles, Wolber tubulars) he included folding bicycles, pumps, lighting, motorized bicycles, clothing, shoes and tools in his repertoire. 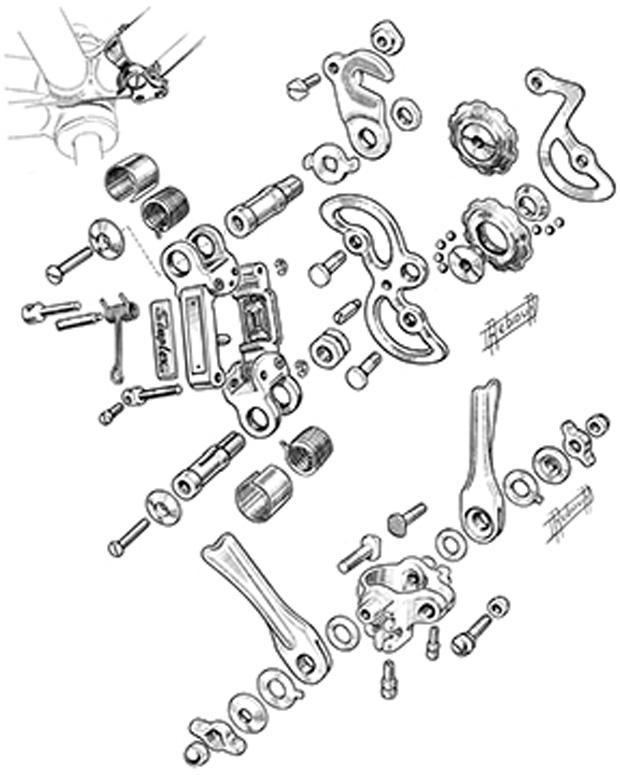 The drawings, beautifully rendered and providing more detail than photographs, present a fascinating array of technological change over nearly four decades. A gold mine to restorers, “Rebour” is a pleasure to simply browse through and revel in a period before carbon fibre, electronic shifting or, apparently, colour printing.

When not wishing Weinmann brakes worked as beautifully as Rebour illustrated them, Leslie Reissner may be found in living colour at www.tindonkey.com

LAKE GARDA Contest: The WINNER IS!