Bookshelf: As we all know, Europe is the Promised Land of Cycling and as a professional athlete if you want to make it big you need to make it there. The Tour de France has inspired cyclists from nations outside of the continent proper – the Yellow Jersey has been won by riders from the United States, Australia, even Kenya (if you count Chris Froome that way). 2019 saw a Colombian, Egan Bernal, victorious, and a fascinating book, “The Big Climb,” recounts the ups and downs of a South American country’s love affair with pro racing. 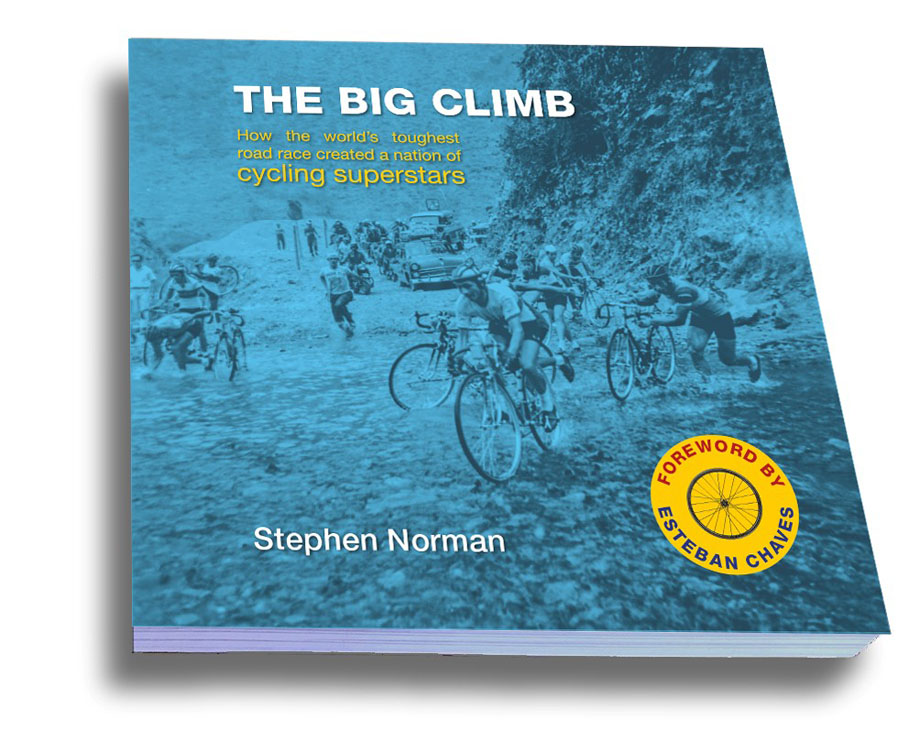 The centrepiece of “The Big Climb” by Stephen Norman is the Vuelta a Colombia, a brutally hard road race established in 1951. Inspired by the Tour de France, a young rider, Efraín Forero, who had ridden to a gold medal at the 1950 Pan American Games with his national team, wondered by Colombia could not have its own version. He found support for the idea but first had to demonstrate the route chosen was feasible. We learn a great deal about Colombian geography in the book and one of difficulties is the extreme changes in elevation. Forero was to try out the hardest stage planned, which began in the semi-tropics at 229 m above sea level at Honda and reached the top of Alto de Letras at 3,679 m ASL, followed by a swift drop to Manizales at 2,107 m.

In October 1950 Forero rode off on the muddy road, followed by a pickup truck containing the English secretary of the Colombian Cycling Association and another enthusiast. The road was so bad and so steep the truck could not keep up but Forero pressed on, arriving in Manizales, the town at the end, two hours ahead of the truck! Shades of Alphonse Steines trying out the Tourmalet in 1910! 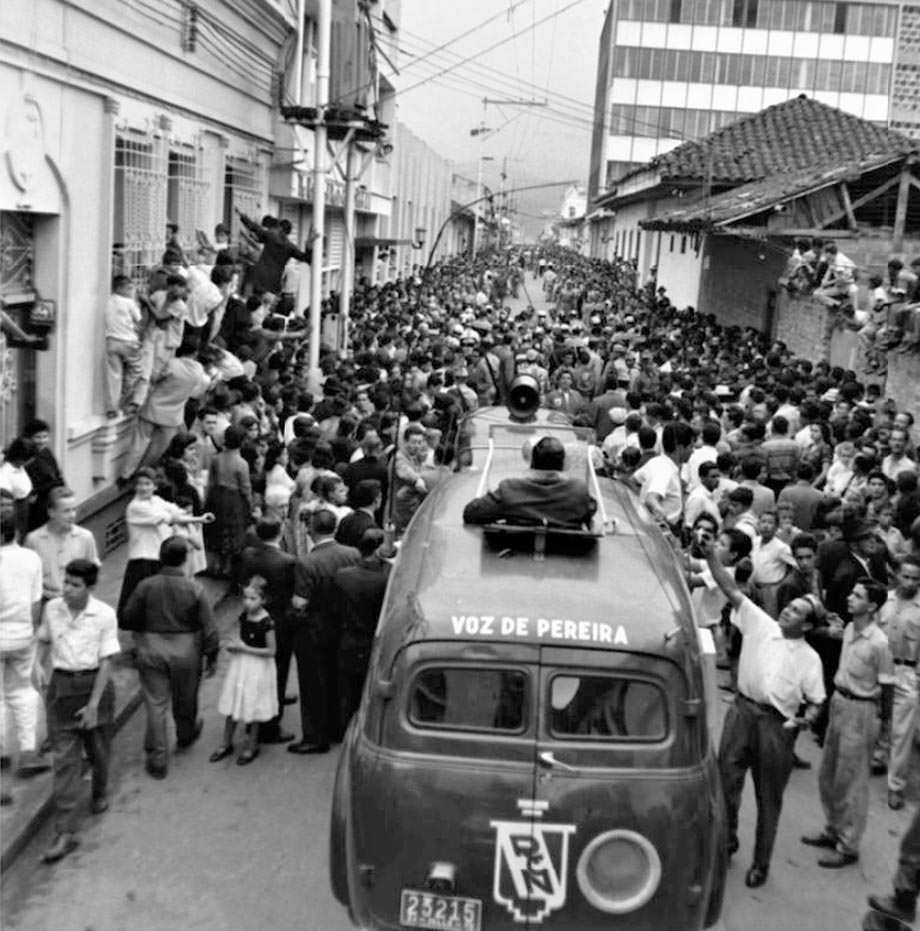 The Vuelta a Colombia was now a race and in January 35 riders started from Bogotá, the capital, on a race that was over 10 stages, with 2 rest days, covering 1,157 kms. It was won by Forero (whose mother was following along in a pickup truck for support!), who finished with a lead of 2 hours 20 minutes, a gap never surpassed in the years to follow. The race was truly epic, with Forero having six punctures on the first stage, and the riders had to wade across a river at one point. At the descent into Manizales, Forero’s speed was estimate to approach 100 km/h. Forero, still around today at 89, became a national idol although never to repeat his victory at the Vuelta. 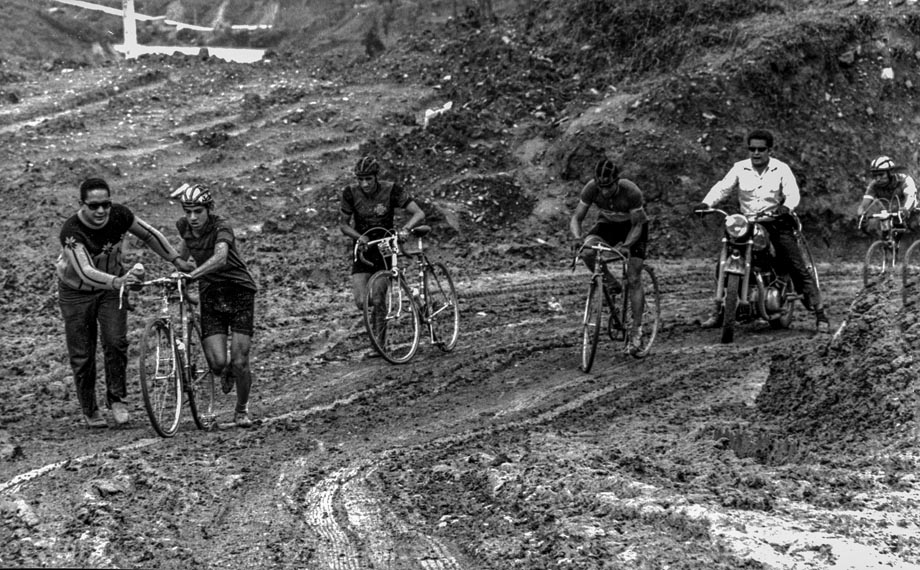 In 1952 the race saw the first European entrant as José Beyaert, reigning Olympic road race champion from France, participated and won. It was another epic event—on the first stage from Bogotá to Honda no fewer than 19 of the 58 starters were eliminated through multiple crashes. The following day the organizers relented and reinstated 11 of the riders. The book is worth reading alone for the account of 19 year old Ramón Hoyos who left his hospital bed with massive injuries and got back on his bike to actually challenge for stages. Hoyos would go on to win the Vuelta a Colombia the following year—and in 1954, 1955, 1957 and 1958. 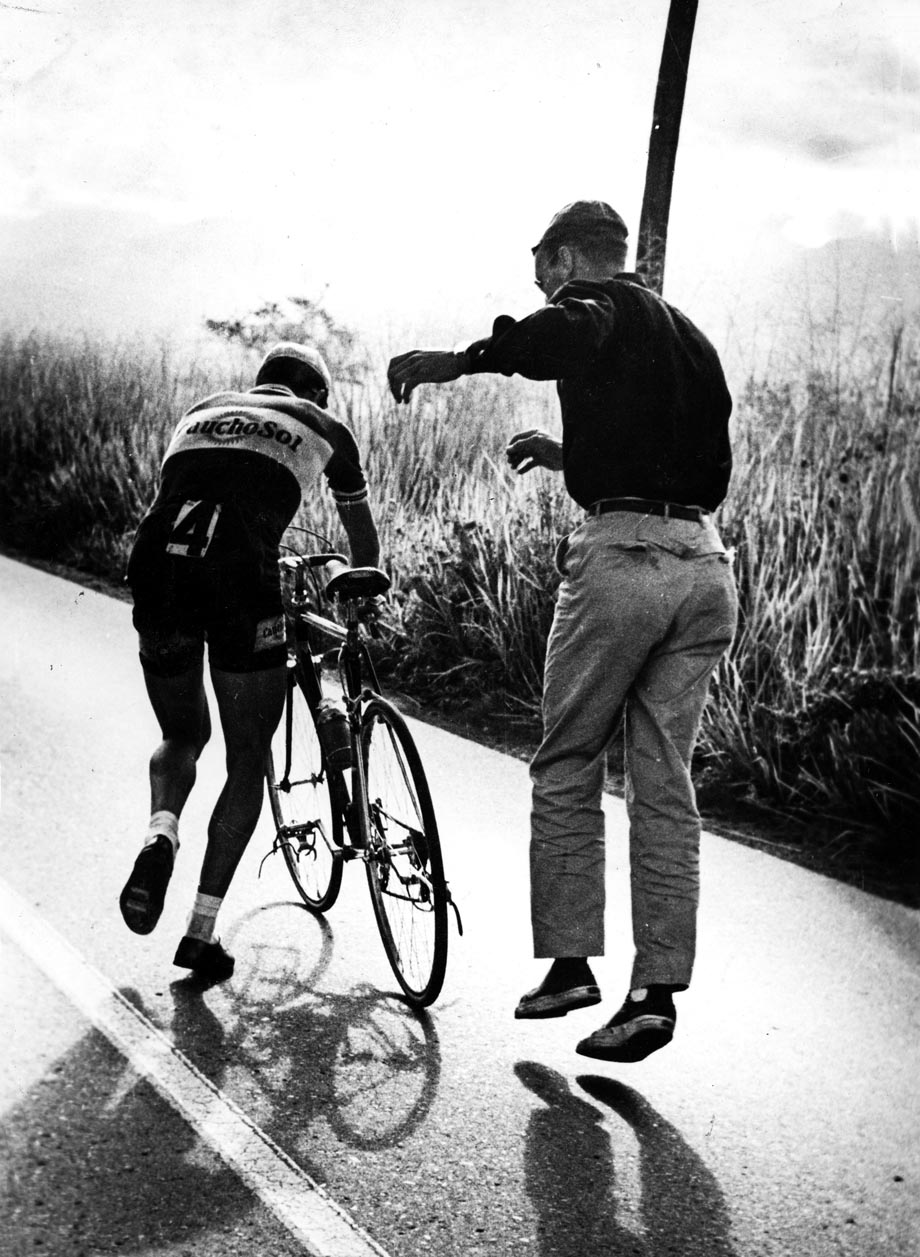 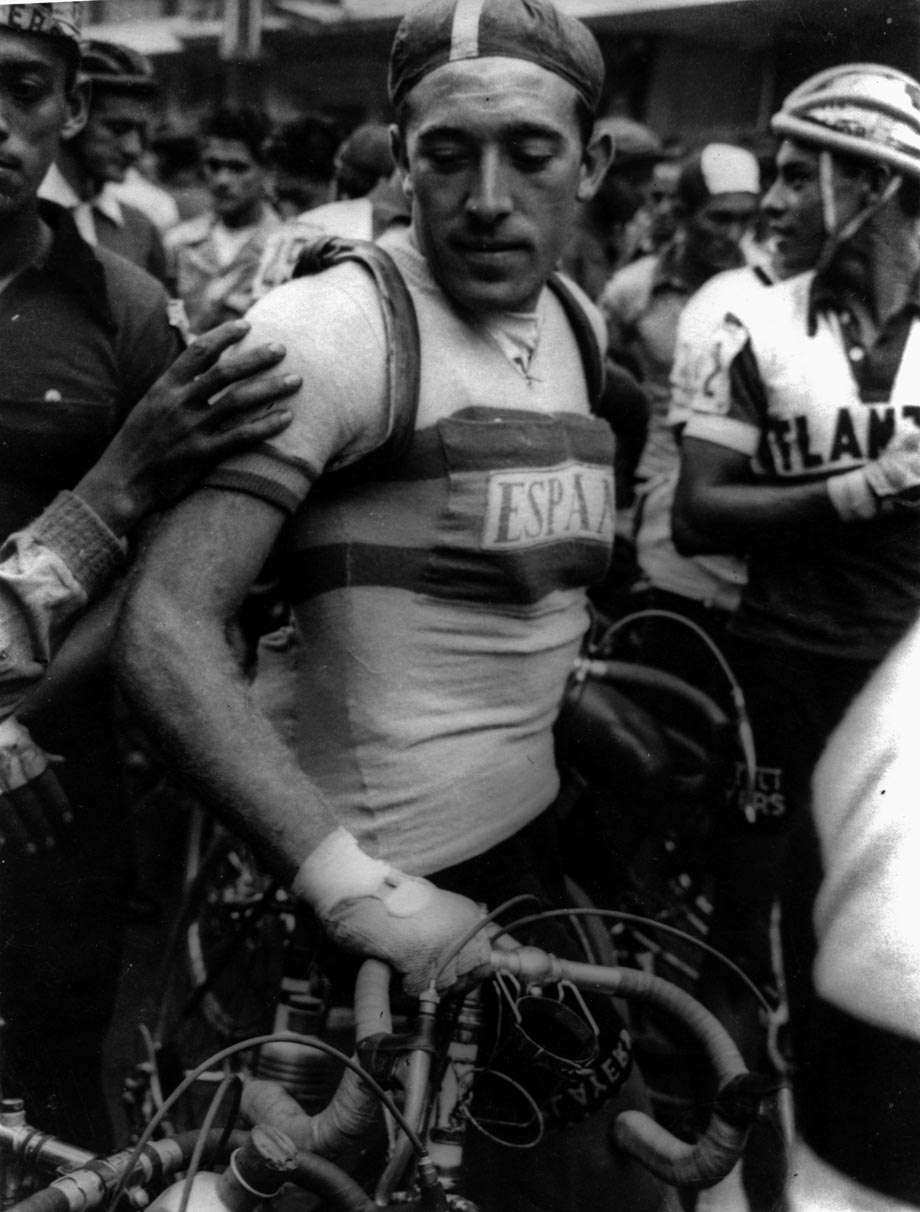 In addition to the year-to-year coverage of the Vuelta, “The Big Climb” provides helpful maps and one page biographies of the riders. We learn of the strong regional rivalries in Colombia, with the Antioquians, based around Medellin, fighting it out with Cundinamarcans, near the capital city, although the most winners can be claimed by the department of Boyacá, to the east. The difficulty of the climbs is noted, with a number of them being over 40 kms in length, while the roads tended to be less steep and straighter than the classic passes of the Alps in Europe. We learn about how so many of the Colombian riders ended up with nicknames—including one named after an Apache chief! There is a little chapter on food specialties of Colombia enjoyed by cyclists, so “The Big Climb” is surprisingly comprehensive for a book of its 169 page length. 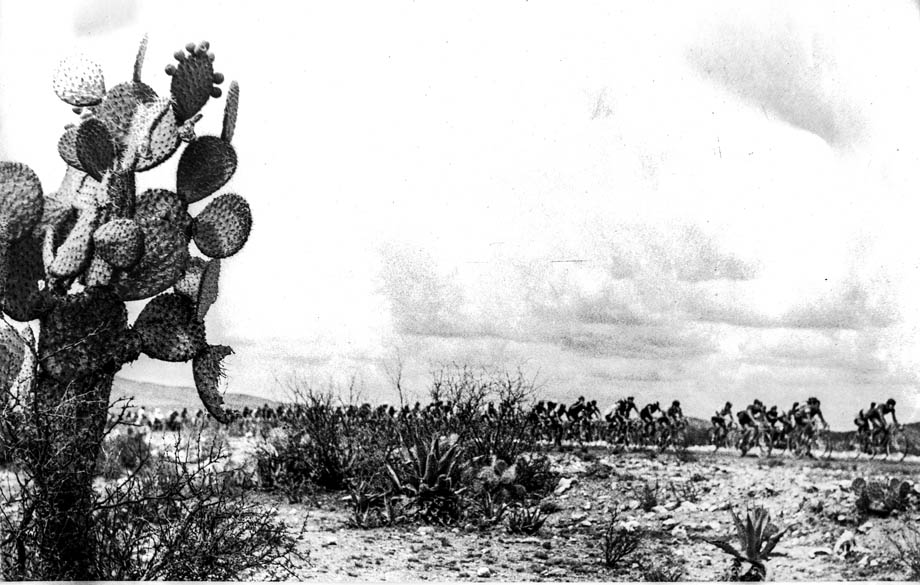 Striking is the national enthusiasm for the race, with extensive radio coverage and newspaper reportage no less emotional than what you would have found in France. It was a race that made heroes out of one-time pharmacy delivery boys. Colombia was a poor country; we all know about the Belgian coalminers who escaped their hardscrabble existence by turning to their bicycles for a better life but their circumstances sound like sybaritic luxury compared to that of the Colombians on their homebuilt bikes. And to top it off, there were earthquakes and landslides and a long-running civil war. 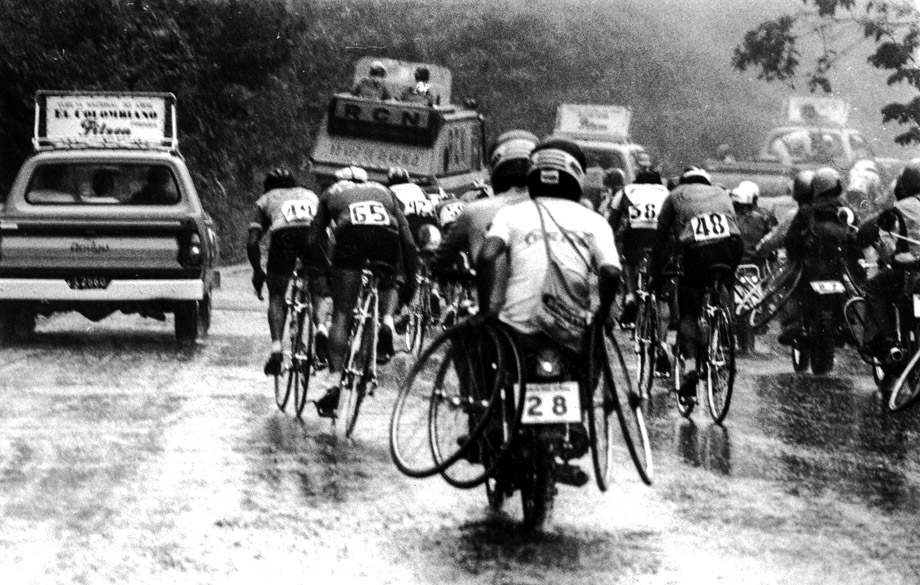 Another interesting story in the book is that of photographer Horacio Gil Ochoa, whose great black-and-white pictures feature prominently in “The Big Climb.” In a 40 year career, he photographed cycling races throughout Colombia as well as neighbouring countries and even Europe. He left behind some 350,000 negatives that are now in the collection of the Medellin public library and would be worthy of a book on their own. 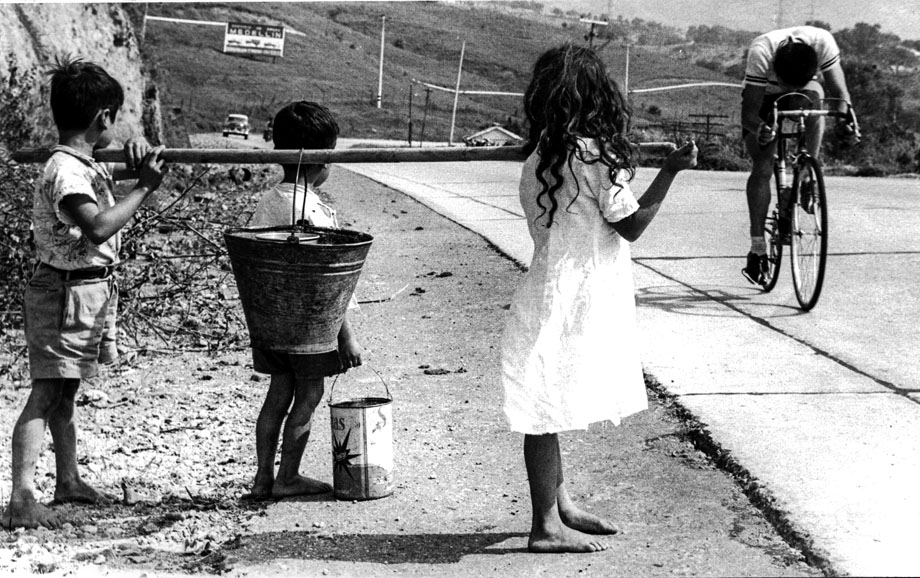 Children at the roadside, 1963 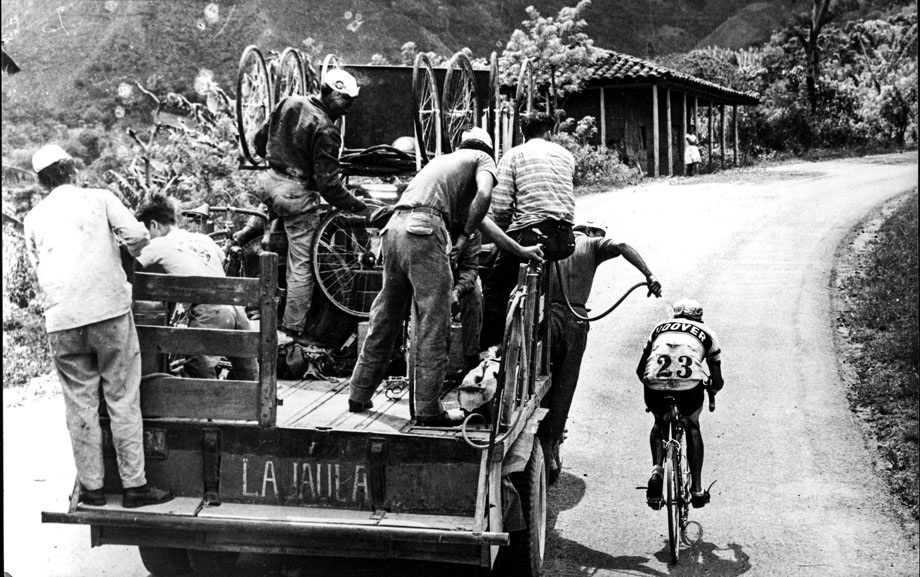 Although some European riders (including a long-in-the-tooth Fausto Coppi and Hugo Koblet) had come to Colombia to race, it was not until the 1970s that Colombians began to journey across the Atlantic for races there. One rider, Rafael Niño, would win the Vuelta a Colombia six times, but his European sojourn in 1974 was not a success. However, on his return to Colombia he brought with him new ideas about how a team should function and be organized. The early days of the Vuelta seemed to include a lot of confusion in the peloton and teammates did not ride very tactically, often chasing each other down. Niño’s example brought much more professionalism to racing in Colombia and was to build the foundation for later success. 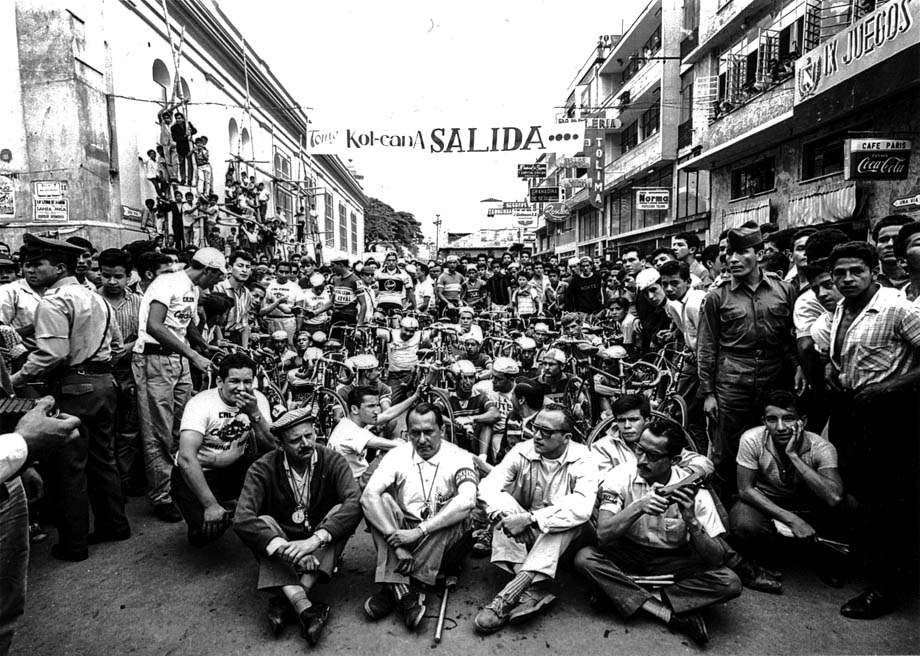 1963 delay, timekeeper and everyone else seated

That success was to come in the 1980s. A Colombian team was invited to participate in the 1980 Tour de l’Avenir, then a race for amateurs, and to universal amazement won the race. The Tour de l’Avenir has been a favourite of Colombians and has since been won by them five more times. Changed to a pro race for up-and-comers in 1981, Colombian victors have included Nairo Quintana, Esteban Chaves (who wrote the Foreward to this book), Miguel Ángel López and Egan Bernal. Then in 1983 the Colombians arrived with a national team for a first serious crack at the Tour de France. The period subsequent to this saw the glory days of Colombian pro cycling with Luis “Lucho” Herrera and Fabio Parra and the Cafe de Colombia team. Herrera won the 1987 Vuelta a España and took KOM jerseys in that race, as well as at the Tour de France in 1985-1987 and the Giro d’Italia in 1989 and 1990. Parra, more of an all-rounder, came 3rd in the Tour de France GC and 2nd at the Vuelta a España. European pros came to Colombia for high-altitude training and to race too. 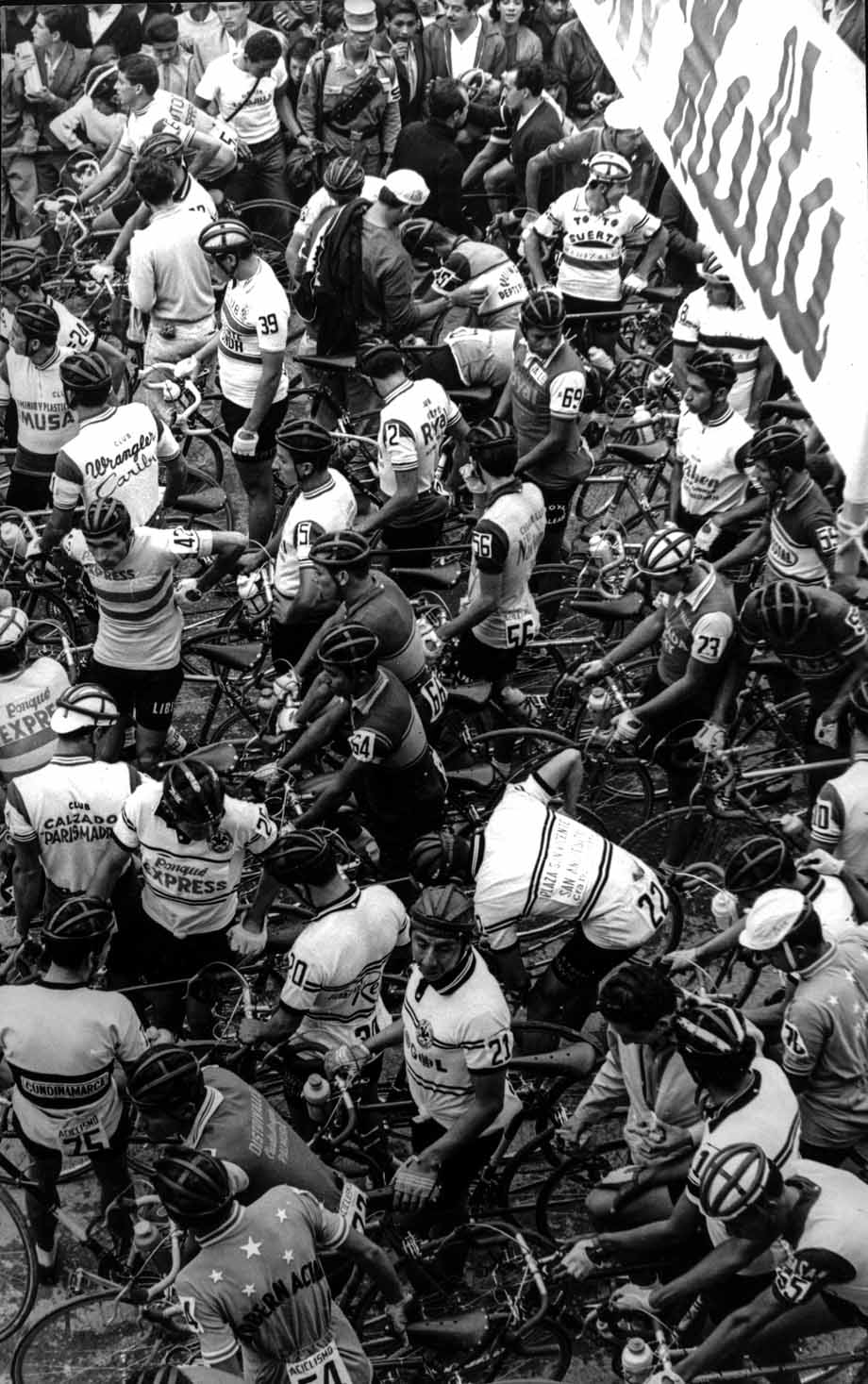 This happy time came all unravelled by the 1990s. The retirements of Herrera and Parra saw gaps not filled by a new generation and Colombian sporting interest began to shift much more to soccer.Far worse, this was the time of the Medellin drug cartel. The most notorious drug baron, Pablo Escobar, was a big cycling fan who built a private velodrome—his older brother Roberto had been a pro racer—and drug money helped to finance some of the teams in the country. Violence exploded throughout Colombia, including the murders of some noted cyclists. Foreign riders stopped coming. Colombian riders in Europe were soon discovering that at the beginning of the EPO era they were no longer competitive in their climbing specialty and came home. And some brought a knowledge of doping that continues to plague the domestic racing scene. And let’s try to forget Rock Racing and its Colombian contingent. But the recent successes of Colombian racers in Europe has been impressive and exciting to fans everywhere. 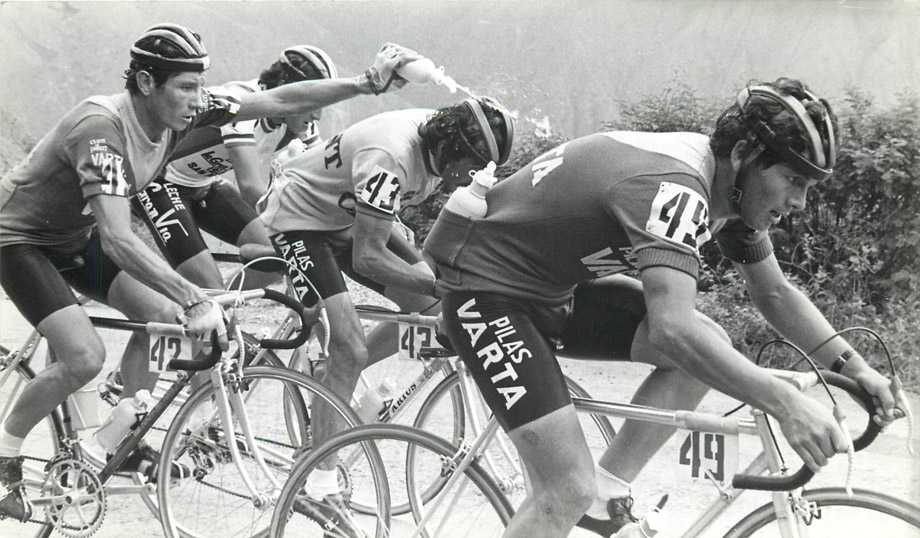 “The Big Climb” is an excellent introduction to a world of cycling unfamiliar to most English speakers. It is not without some small faults—as in so many books, a bit more editing would have been helpful. One map shows the Atlantic Ocean where the Pacific should be; Laurent Fignon is identified in a photo as Greg Lemond; Santiago Botero is described as the first Colombian KOM winner of the Tour when he accomplished this in 2000 but a few pages earlier we see that Lucho Herrera’s palmarès included several earlier KOMs there. The book has an odd layout, with pages on the left side not continuing on the right side but going on overleaf, which is a bit maddening. Minor quibble aside, “The Big Climb” is one of the most interesting books we have read this year and highly recommended for any fan’s library. Wonderfully illustrated, it offers a very different perspective on pro bike racing seen through the lens of South America. Although the Vuelta a Colombia has lost some of its importance, with winners of the Giro d’Italia and the Tour de France in 2019 coming from that continent, perhaps we have another Golden Age after all. 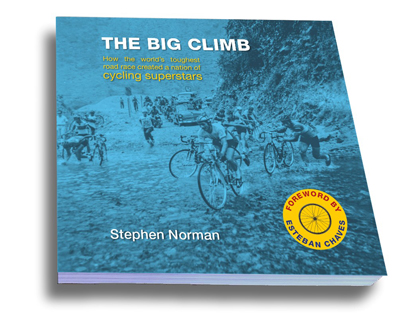 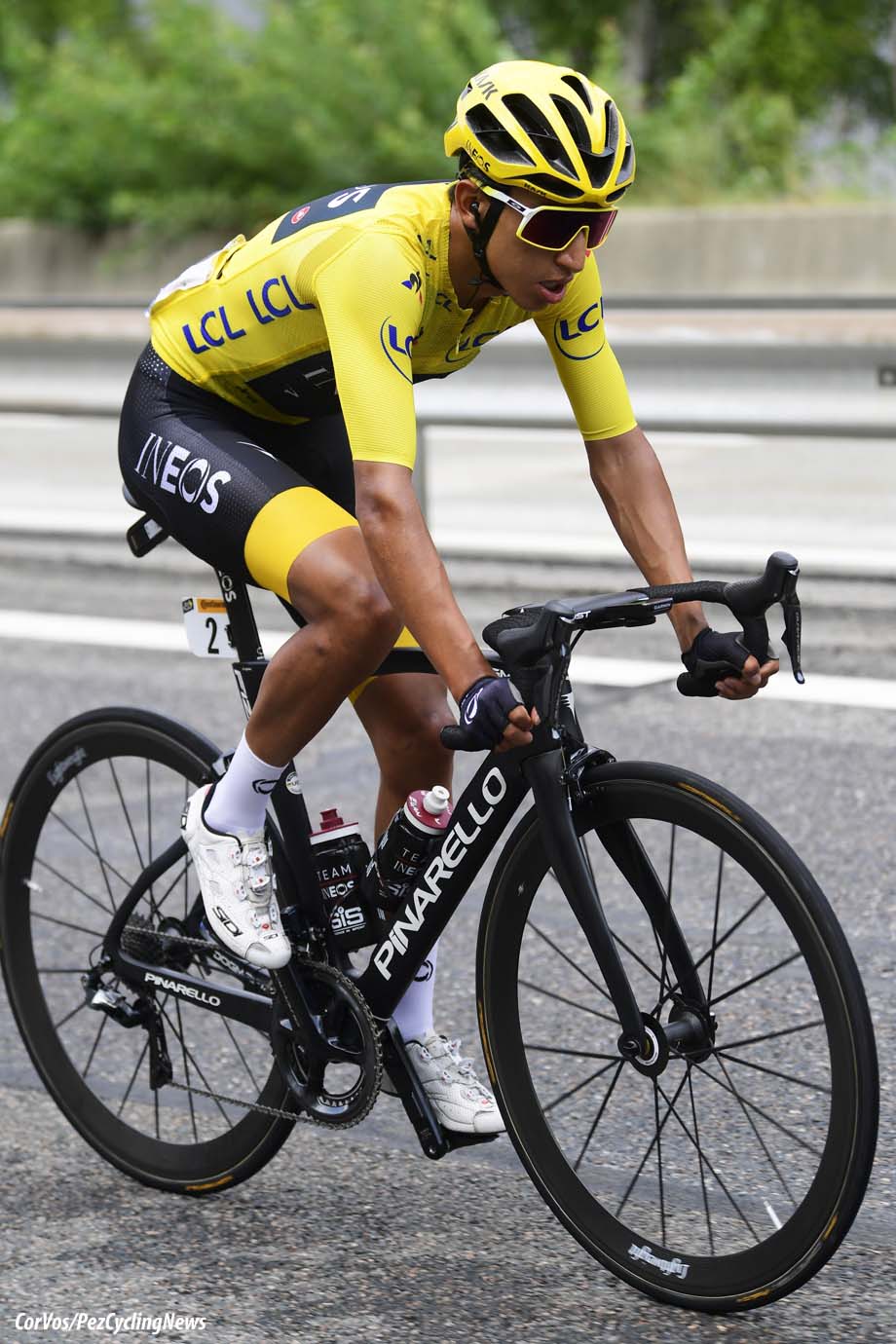